Only Fools and Horses (and a plonker)

Route: An Socach from Glen Clunie

With my climbing sidekick being otherwise detained, I decided to make the best of the forecasted good weather and climb An Socach from Glen Clunie. One of the benefits of climbing solo is that, being an early riser, I can leave at the crack of dawn, miss the worst of the traffic, and (usually) be first on the hill. I left home at 5am, drove up the A9 and A93 and was parked up in the lay-by just before the entrance to Baddoch at 7.30. Crossing the bridge over Clunie Water to start the walk

It was a glorious morning, and I enjoyed walking through Baddoch Glen alongside the Baddoch Burn. This on its own would be a great walk for anyone who prefers level walking to hillclimbing. Before long I reached Baddoch Cottage, which seemed to be empty. I carried on through the glen for another mile, crossing a bridge over the burn at one point, before coming to the point where another burn comes down to join it, the Allt Coire Fhearneasg. I forded the burn easily and stopped there to have a bite to eat. The only sounds were the flowing water and the calls of a couple of oystercatchers. I watched two wagtails, one pied and one grey, chasing each other along the river. I could have sat there all day, but I turned right and started following the path up Socach Mor. The walk description advises to head directly for the cairn you can see at the top of the hill. It wasn't long before I was at the cairn and checked my Garmin. 700 metres and it was only 9am. 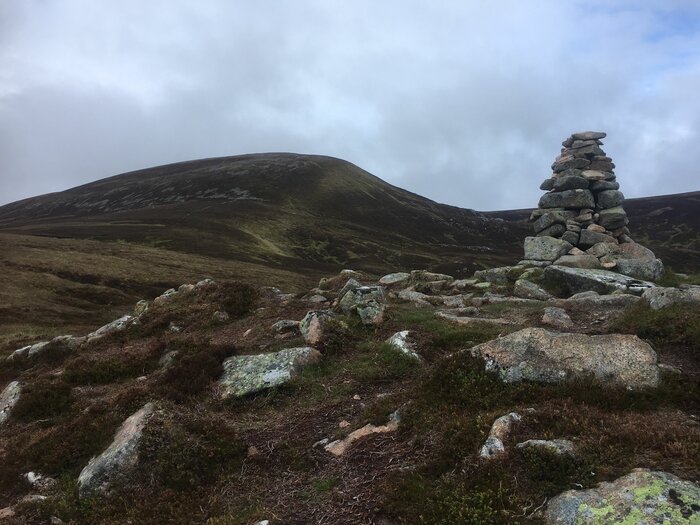 The cairn on Socach Mor

At around 800 metres I saw a couple of birds running around. As I got closer I could see that they were a type I'd only ever seen once before. Dotterel.

The name Dotterel comes from an Old English word meaning 'simpleton', and is probably linked to the Scots word 'doatery', meaning absent-minded. Even the Gaelic word for them translates as 'fool of the moor'. The reason they were given these names is because they are relatively tame, and therefore are easily caught. Maybe that's why there aren't a lot of them around these days.

Anyway, here was my chance to get my first good photos of them, especially on a sunny day like this. I managed to get within a few yards of the male one - brilliantly coloured in dark brown, white, and chestnut. I took out my camera, got it perfectly framed and ... nothing. I'd forgot to put my battery back into my camera after charging it the night before. I rushed to get my mobile out but the camera in mine is hopeless for photographing anything small. The dotterel had better things to do with his time, and toddled off. So did I, towards the summit. When I got there I couldn't believe what was happening - snow ! It had been a warm sunny day walking through the glen, and it was only at the 700m cairn that I'd put another layer on top of my t-shirt, so snow was the last thing I'd expected. Thankfully it only lasted 5 minutes, and I was able to enjoy the views over to Loch nan Eun, Glas Tulaichean and beyond.

As I headed back down I could see Loch Vrotachan, with The Cairnwell behind it. When I got back down into the glen the weather was even better than on the walk in. I stopped a few times for a drink and to enjoy the peace. I took a few photos (obviously with my mobile !). 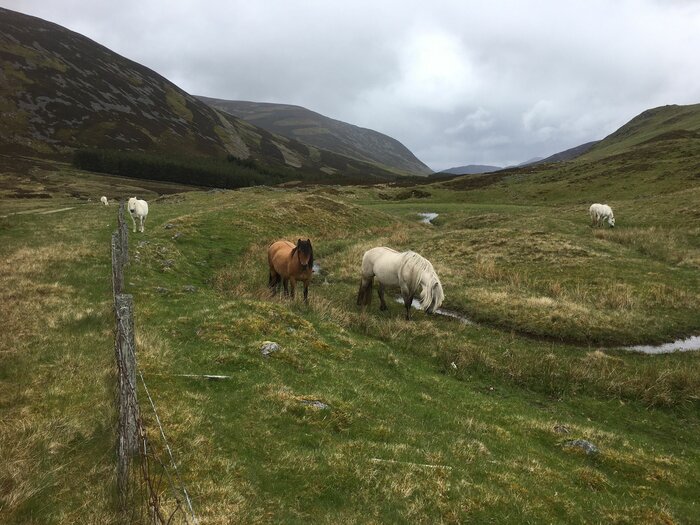 If you look at the above photo closely, you'll see that the pony furthest away is on 'my' side of the fence. As I got nearer I could see that he'd moved right onto the path. It's strange how we react when animals are in our path. We know that their rarely interested in us, and usually shuffle off as we get nearer. But there's always that thought in your mind that this one could be different (or maybe it's just me !). The pony hardly looked up as I edged past it.

When I got back to the car, it was still early afternoon. It had been a brilliant morning, and I was tempted to park up at Glenshee and go up the Cairnwell or Carn Aosda. But as I drove the stiffness kicked in and I just carried on by.

An Socach is one of the easiest Munro's to climb and has no technical difficulty, no real character, and no great views. But on a clear day like I was lucky enough to get it's as enjoyable a walk as anywhere, and one that I'll look forward to doing again when my climbing partner gets round to it.

Luvvly jubbly.
Click to mark this as a great report. Register or Login free to be able to rate and comment on reports (as well as access 1:25000 mapping).