I awoke on a calm, bright and (shock, horror) sunny morning, looking forward to our latest hike.
Today's walk was a pleasant 1 1/2hr journey from Arbroath via Dundee (to join Doug and Sean) and before long we were parked at the Dalmunzie Hotel and geared up, ready to go.

We set off with blue skies and no wind, it was coldish, but a great start to the day. We headed up to our right to join the old railway track, and followed that up towards the Glenlochsie Lodge. The river was quite swollen and fast flowing, so we were glad to keep up and away from it!!
The climb after the lodge got the muscles in the legs warmed up and we continued up until the first peak of the day, with it's snow covered dome, came into view. Once on the lower part of Glas Tulaichean, we got our boots used to the snow and ploughed on up the hill.
After a short while the walking became tricky with the snow changing from hard and compact one step to loose and slippy the next. The views were excellent though and the jacket stayed in the bag as we were being blessed with a lovely day and even now the wind was light. Once we got to the top of the dome, we headed towards the summit and took in the great views and took some pictures. 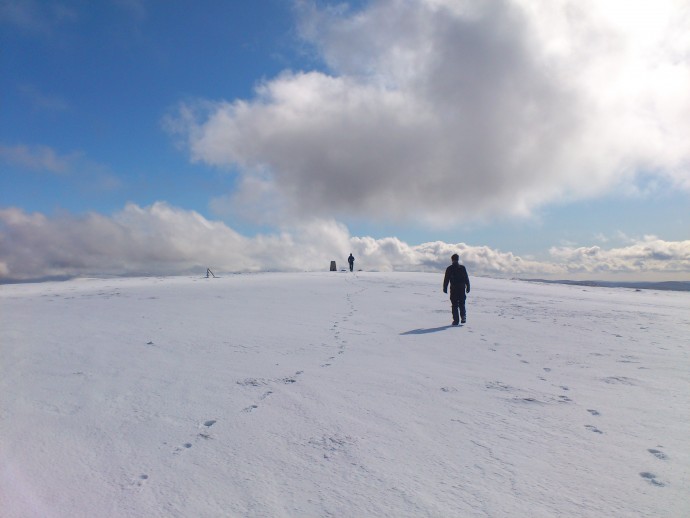 We had a quick check of the map and heading across and down to our next section of the walk. At this point we decided to get the blood flowing by having a wee sprint down the hill as it wasn't too steep.
Sean led the way, and the schoolgirl like giggles getting slowly quieter as he tore off into the distance, convinced me it was a good idea!!
I ran after him, with Doug bringing up the rear.
The snow obviously hid the terrain well and my footing was compromised one too many times, and I fell and slid back first then rolled onto my front in a shower of snow.

It was great fun and the laughs (and the actual running) warmed us up no end.
We joined the stalkers path (which was really bad with water/boggy sections) and headed along and up onto Carn an Righ, were it was Doug's turn to pose. We were getting hungry, so we pushed on to reach Loch nan Eun for a spot of lunch. Re-fuelled, it was time to start heading back, and the view down Gleann Taitneach spurred us on. The first part of the decent was tricky with bog, wet stones and rocks and several streams hampering us, but we pushed on and once down onto flat ground it was good going. We crossed the river at the bridge at the bottom, and headed back to the car in a respectable time.
We payed our dues for parking at the Dalmunzie Hotel but didn't stay for a beer as there was a wedding on, so we headed for a quick drink at the Spittal of Glenshee hotel before heading home.
A good, tough at times walk but with the nice weather, an enjoyable day out.
Click to mark this as a great report. Register or Login free to be able to rate and comment on reports (as well as access 1:25000 mapping).