An Teallach in the dark - my first Munro

For me, hillwalking has always been a means to an end, namely landscape photography. So I've never felt the need to bag Munros - there've always been plenty of views to shoot without climbing 1000 metres. But during lockdown, I did more hillwalking for its own sake, and got to a level of fitness where I felt like I could take a Munro on. Of course, I still wanted to make it somewhere worth taking the camera. A little research led me to one of the finest views in Scotland - An Teallach.

Hillwalking with photography in mind adds a certain number of extra considerations. For the best light, arriving at the location a little ahead of sunrise or an hour before sunset is ideal, to capture the 'golden hour'. That means starting early and ascending in the dark, staying out late and descending in the dark, or wild camping. For this trip, I decided on an early start.

The WalkHighlands route from Dundonnell put the ascent around 3.5 hours. With sunrise at 8am, that meant a 4.30 start, which obviously meant a considerable portion of the ascent in the dark. And so I turned to WalkHighlands once again to idiot-check that proposition. KeithS, jmarkb, and WalkWithWallace answered the call and confirmed that the route was doable. Since Keith had mentioned he would be in the area and the weather had been changeable, I contacted him a little later to ask if there was any snow about. Not only did he answer my questions, but he also generously invited me for a socially distanced cuppa at his Highland pad.

Only a fool refuses free tea, so when the day arrived, I put the car in full camping mode (back seats down with a sleeping mat, sleeping bag, two duvets, and a bag-for-life full of snacks) and struck north from the Borders with plans for a sunset shoot at Mellon Udrigle beach. A few leg-numbing hours later I was being handed tea and cake in Keith's front garden. If there's a finer place to sit and consider a climb of An Teallach with a brew I don't know it - this shot was taken without leaving my seat: 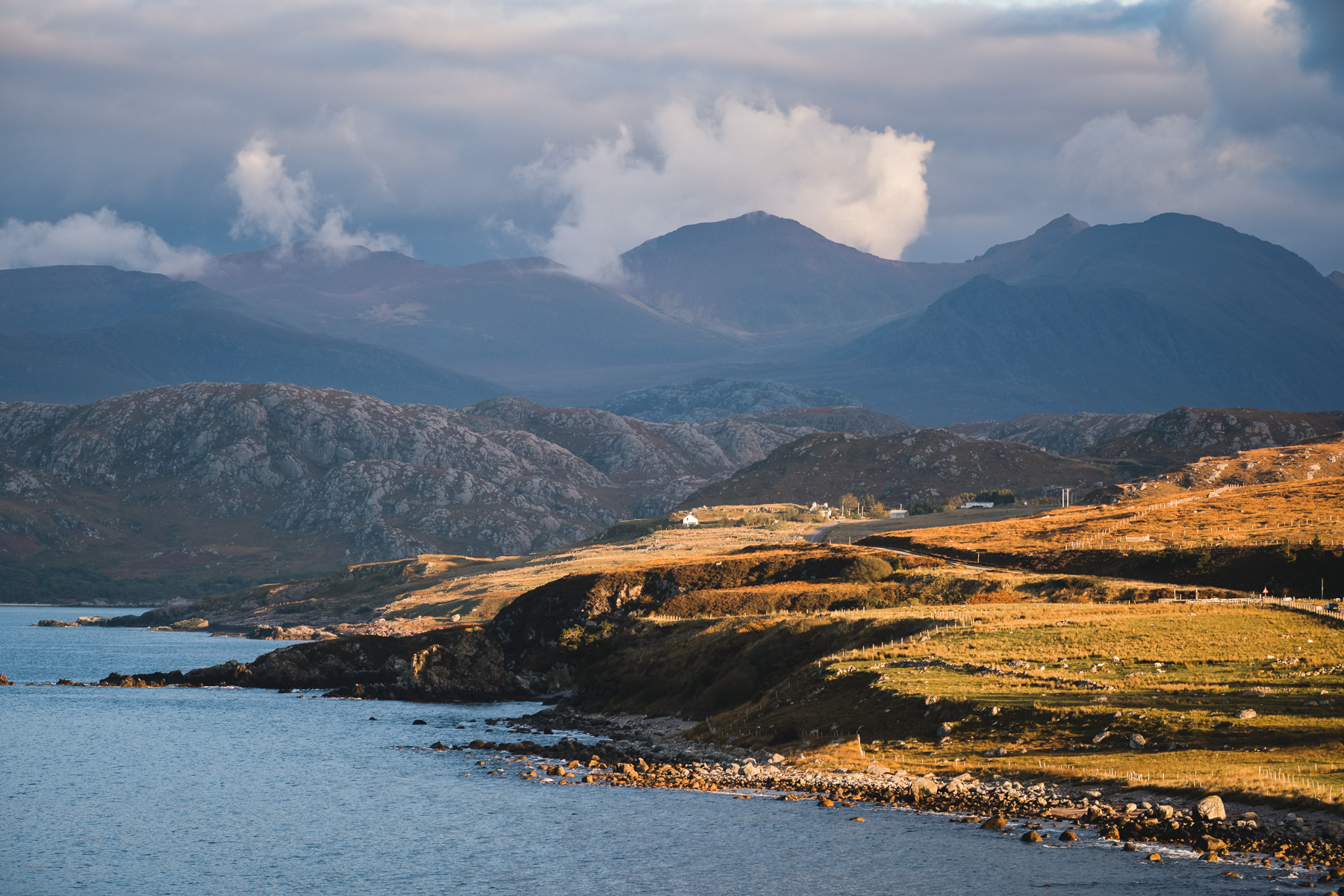 I admitted to Keith that it looked not a little intimidating, but he assured me it would be fine, and who am I to argue with someone with 281 Munros under their belt?

Tea and cake finished I carried on up the road to the lovely white sands of Mellon Udrigle, where the sunset lit the next day's destination in stunning pinks: 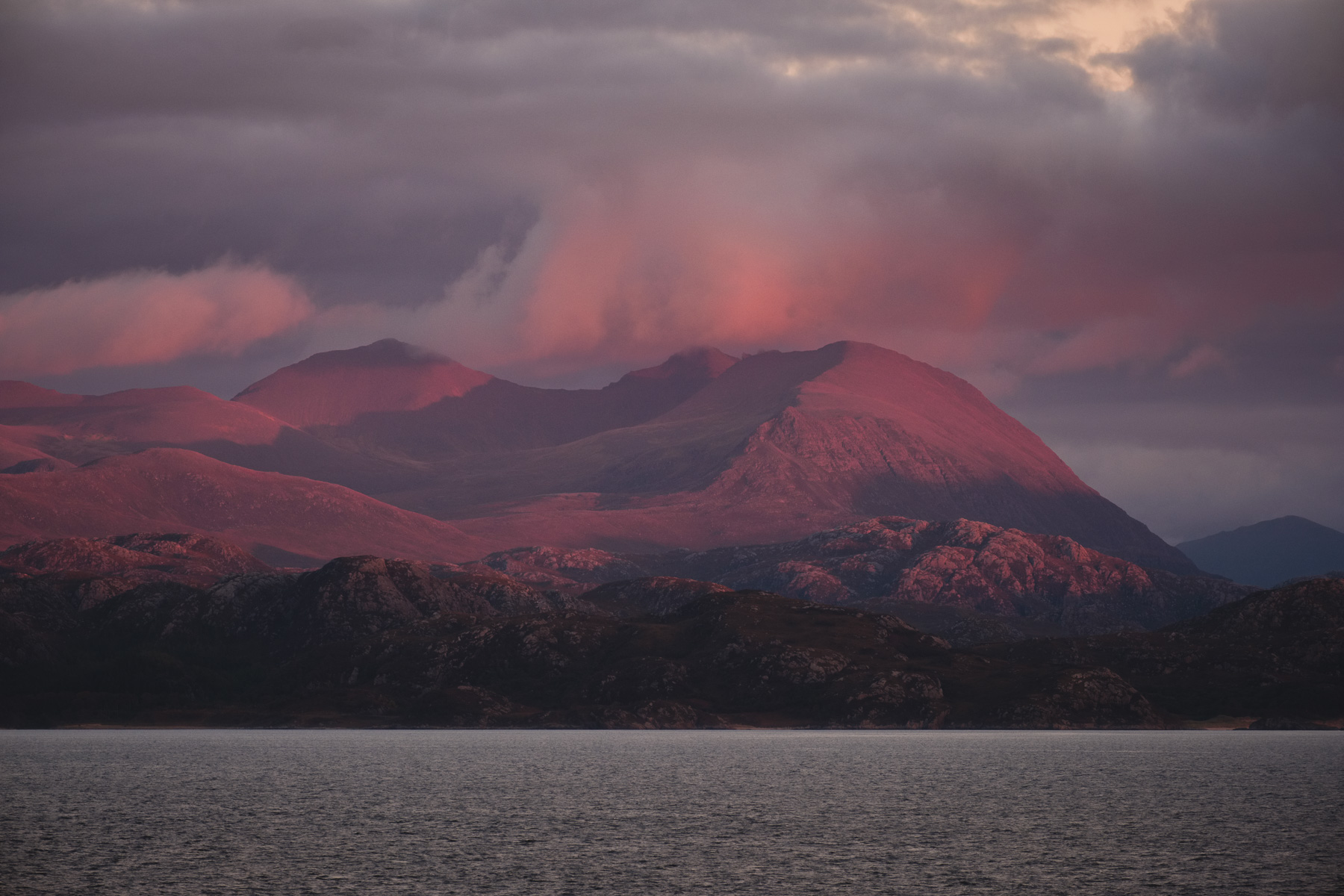 Ben More Coigach put on a bit of show too: 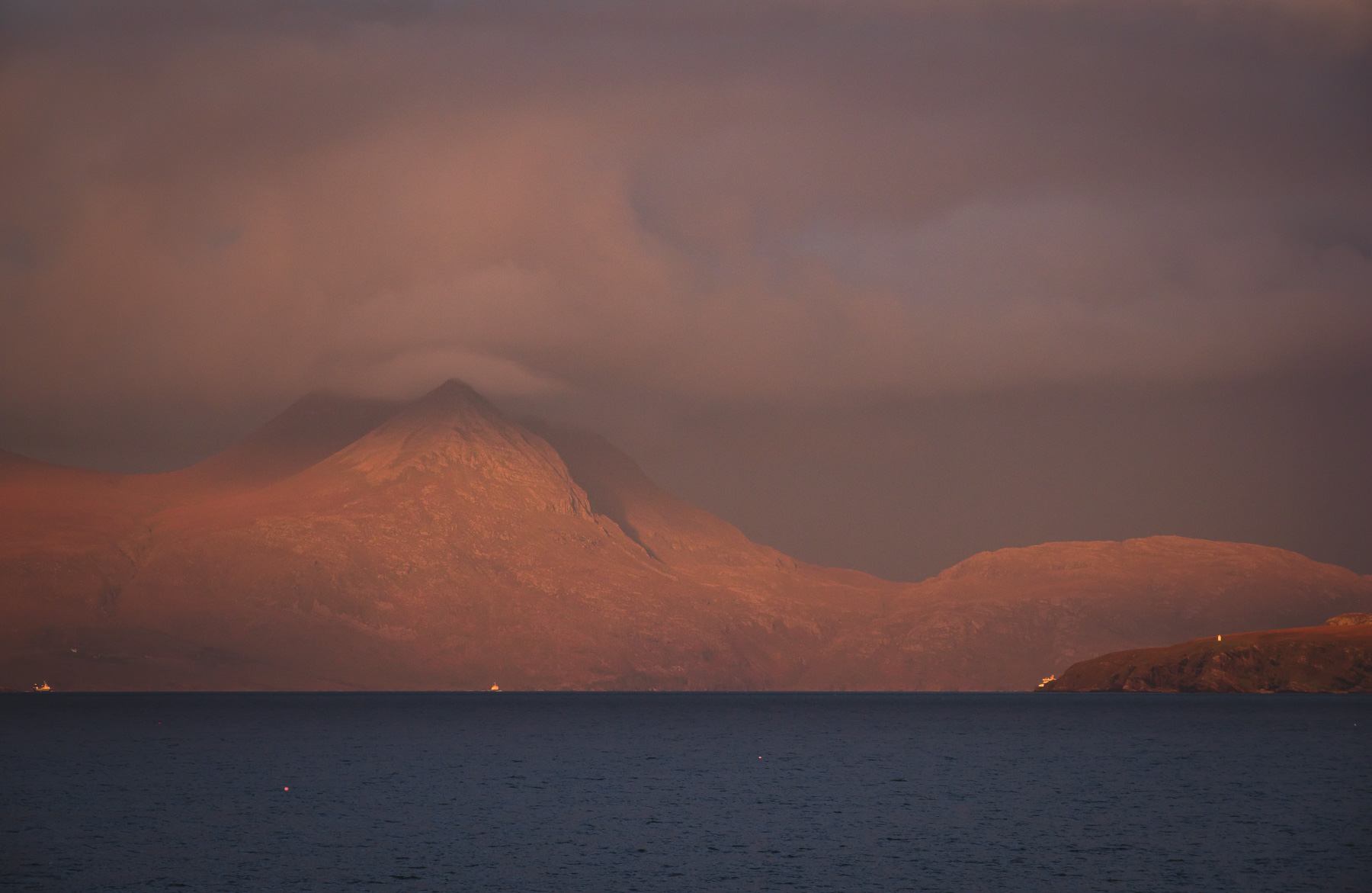 With fingers crossed that the good forecast would hold true I headed back to Dundonnell to get some kip ready for the climb. A few hours were grabbed, and I got up at 4.30 with the bellowing of deer echoing across the glen. I once again berated myself for not taking up portrait photography - reasonable hours, warm studio, coffee on tap, models. Although I had woken in the night to see Ursa Major overhead in clear skies through the back windscreen, it was now obviously overcast - not encouraging. But there was a long time till sunrise, so after a quick breakfast I packed up and made my way up the road to the almost concealed start of the path, tucked away between gorse bushes and over a burn.

The going was immediately very boggy, and rougher than I expected this early on. A constant flow of water was running off the mountain and down the path, so that it was really little more than a stream bed. It was at least easy to follow in what was pitch blackness - I was definitely glad of the headtorch, and the backup headtorch, and the backup flashlight, and the spare batteries I'd brought!

Further up the path widened and became a little harder to follow in the dark, simply because it often became indistinguishable from the surrounding rock. A few stops to orientate myself with the digital map and GPS on my phone proved necessary, and the increasing number of reassuring wee cairns helped too. Overall it wasn't too bad a climb.

Once I reached the beallach the pre-dawn light was starting to appear which made the cairns easier to see and the path ahead clear. Crossing this desolate, almost cobble stoned stretch was straightforward, and I eventually made the eastward turn to come to the col below Bidein a' Glas Thuill. On the approach the climb looks intimidating, not helped by the fact that WH route seems to suggest that the path heads straight up the spine of the ridgeline. Getting closer the actual path, on the western flank of the slope, appeared, and I breathed a sigh of relief - it's steep, but doable. Still, after 3 hours and nearly as many miles of hiking in, it's nevertheless a bit of a grind.

Despite both the Met Office and MWIS forecasting clear skies, the overcast hadn't lifted, and now in the light I could see that the peaks were covered, just barely, in mist. This disappointed the photographer in me, but I'd come this far, and at the very least I was going to bag my first Munro today. Finally I clambered my way to the trig point, taking a short cut straight to it from the final cairn rather than following the path round. Stepping up on to the rocks I was immediately blasted by a freezing wind - another miss on MWIS' part, whose forecast the day before had promised "Effect of the wind on you - negligible". But I'd done it - Munro #1!

The view across to Sgurr Fiona and the pinnacles was obscured in cloud, so I dropped back down behind the rocks, added more layers, and had a slap up second breakfast of Lucozade Sport, Peperami, and Tracker bars. While this was my first Munro, I've spent enough time in the hills to know that fog can disappear just as quickly as it appears, so I resolved to wait it out for as long as possible in the hopes of it doing just that. Engaging in my own patented mix of calisthenics and interpretative dance to keep the blood flowing, I got my camera ready and waited. Occasional forays out of the shelter of the rocks were met with the same icy blasts as before, but after an hour and half of waiting, it simply blew the fog clear off the peaks and the stunning view opened up.

I quickly seized the moment and began snapping away: 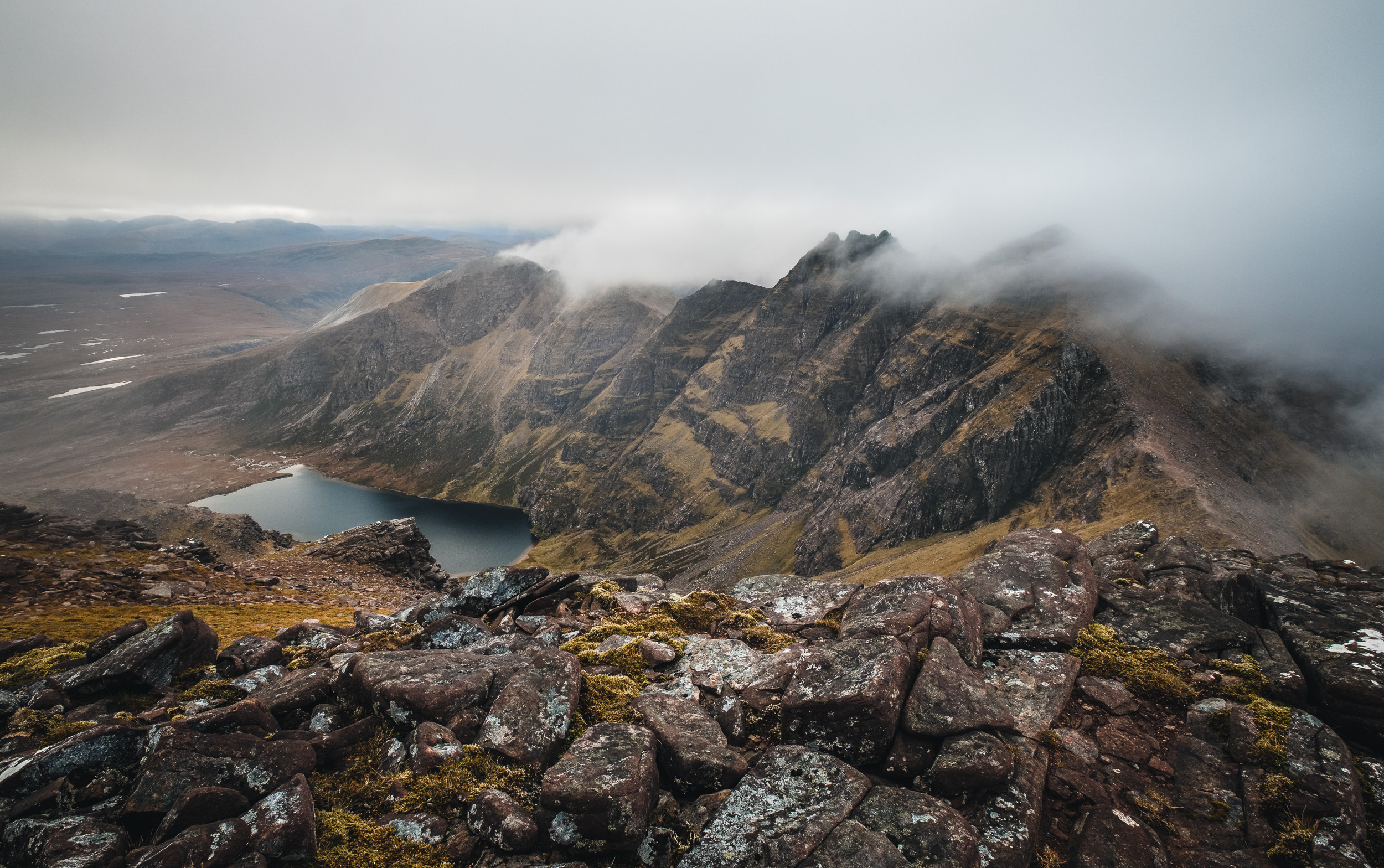 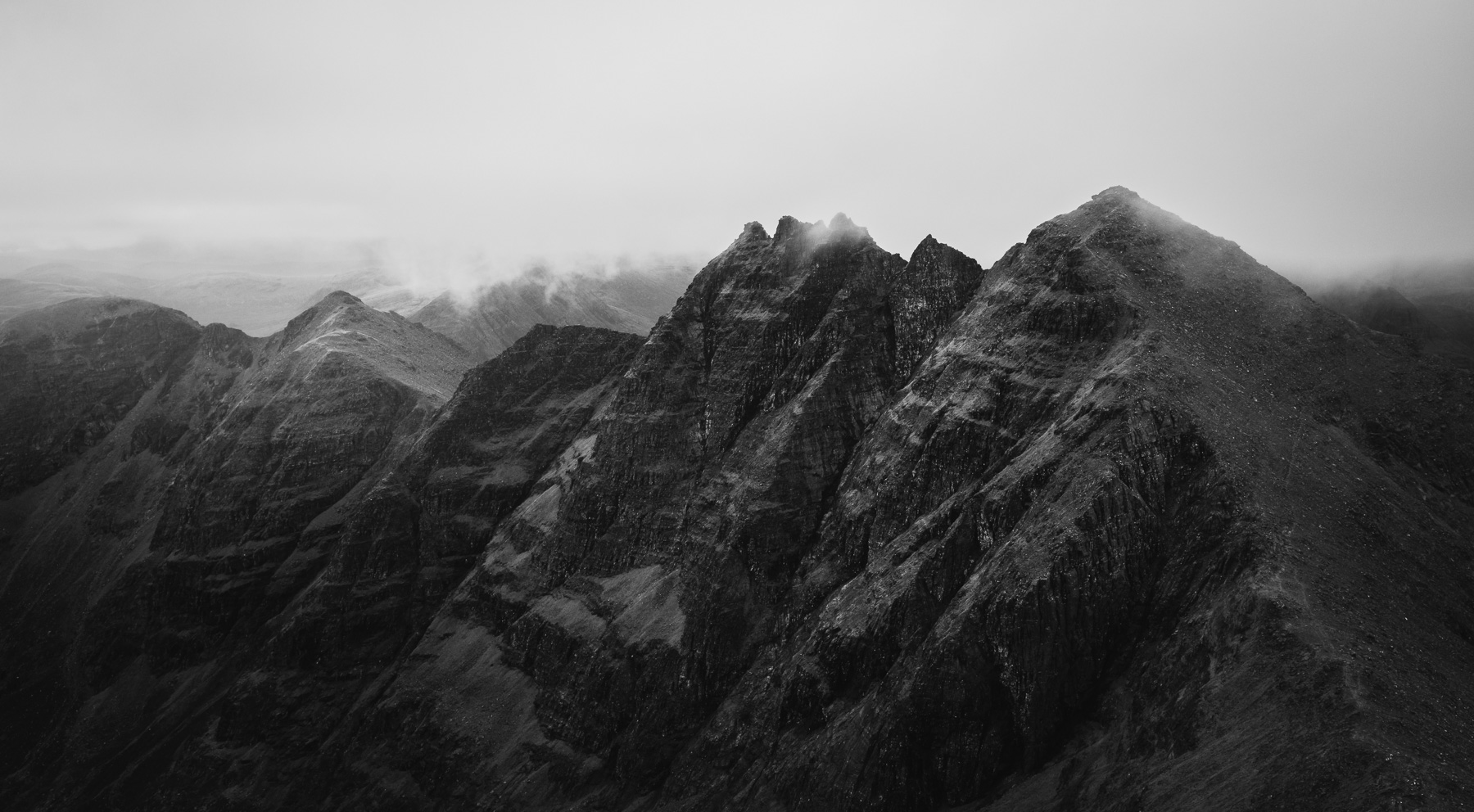 The cloud soon began to move in again, and the wind was still blowing hard and cold, so I decided against going over to Sgurr Fiona and instead began the descent. Even in daylight I found it much harder than the ascent, especially coming down after the bealach. Wet rocks, boggy puddles, and big steps meant it was impossible to get a rhythm up, making for a long slog of carefully picked steps. One of the benefits of climbing up in the dark is that you are constantly amazed at what you managed to do without realising it - the route seemed a lot rougher and steeper. The lower reaches seemed to be even boggier too, but eventually I made it back to the car in one tired, stiff, muddy, but unscathed piece.

So, that's the story of my first Munro. Will I do another? Almost certainly. Will I do them all? Almost certainly not - for one thing I would never have the guts to do the In Pin! But I am definitely glad I did this one. All lesser hills now seem easy by comparison.
Click to mark this as a great report. Register or Login free to be able to rate and comment on reports (as well as access 1:25000 mapping).