Last year (2018) I took myself up to Ben Nevis on New Year's Day, and this year I opted for Christmas Day itself for my annual pilgrimage to Britain's highest mountain. My favoured route once again was via the Carn Mor Dearg arete, and descending by the main path. It makes for a longer, tougher day than the standard out-and-back (which itself at this time of year is far from tame), but now on my third such completion I find myself addicted to this spectacular 'backdoor' approach to the Ben.

The 350 mile journey up this year is worthy of mention in itself, and this I did in two stages. On the 23rd December I drove up from Lancashire under clear calm skies and, whilst enjoying the vista of the stars in the wide open spaces of Scotland, noted that the temperature dropped as low as -6C. This did make me contemplate what I might experience on Ben Nevis, but as it turned out the day of the walk was considerably 'warmer' than this. After sleeping in the car at the viewpoint above Loch Tulla on the A82 (a more snug experience than you might think, I have this method of accommodation down to a fine art), I drove the rest of the way on Xmas Eve, and on approaching Fort William in the late afternoon sun was treated to mesmerizing cloud banks along Loch Lihnne. Viewpoint above Achallader on the A82. The car park I used in Glen Nevis was a little further from the mountain than last year's Achintree House, and added about 3 miles onto the whole walk, albeit mostly flat road miles. On winter expeditions, you know time is of the essence, but I always seem to get started later than planned after parping around with gear. It was 7:30am on Christmas morn, by the time I got going. This has consequences for the later part of the walk - namely nightfall - but I like to think I am intelligent enough to plan in 'safe' miles for near the end! It has always seemed to work out so far. In a statement of confidence (or complacency), I didn't even have a head torch, having lost it on the very last day of my Wainwrights completion 2016 (I believe I left it in a Keswick restaurant and never got it back), and I feel I haven't done enough hardcore walking since to justify buying a new one. Day breaks on the pass at Lochanmeal below Ben Nevis. Rounding the pass, the Carn Mor range comes into view - my route ahead. 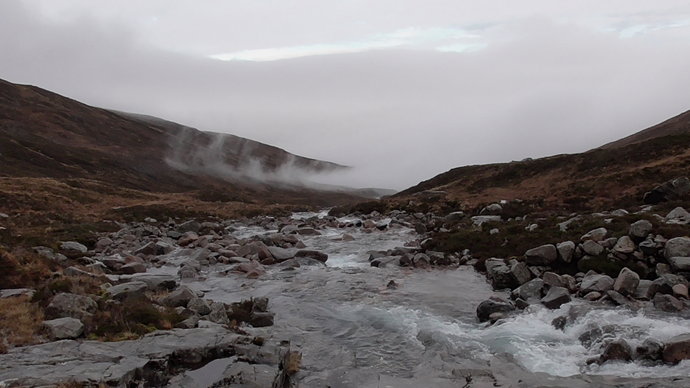 Crossing the 'allt a mhuilinn' was not so easy. The sun rises on the shoulder of Ben Nevis. 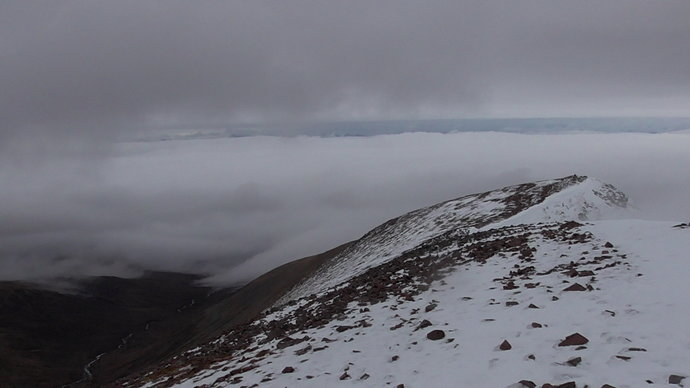 Above the clouds on Carn Mor Dearg. Onto the arete, less snow than last year but still an arresting sight and a rugged crossing. View down the valley from half way along the arete. Very pleased to see the summit come into view. Time was running short and was getting tired, but did I look worried? For the first time all day I encountered others, so happily I could get my photo. I crawled in for a chilly Xmas celebration with several others, one of whom passed whiskey around. Much more snow last year, as demonstrated by this pic of the shelter. A ceremony I set myself was to 'tap and unwrap' and eat some on the summit. Accomplished (did not leave my gloves off for very long let me tell you). In the white haze of the summit, I set off following the others down. Lurking out there in the mist on the descent, it was... ... a stag. A memorable encounter. Night falls, but I not before I made it down at least to the Loch. A selfie: headband is detectable on close inspection.


A Walk in the Black Mountain (range)

The Wainwrights in Winter: my favourite 25 pics

Buttermere at its Best