We've been quite busy recently and climbing quite a few Grahams, so I've been posting only when I'm inspired or if we've noticed something worth reporting, that doesn't feature in anyone else's report. A new track and a missing gate this time.
We parked just past the start of the track from near Corryghoil. The pylon line is being refurbished so the main access track to the pylon line is now a wide firm track with truck-passing-places, rather boring. Beyond that, a new track is in the process of being constructed alongside most of the pylons. We're not sure how many trucks were going up and down but over the course of the day we must have waved at them all several times.
There were special signs to warn the trucks not to go too fast. This one wasn't terribly accurate at showing my tortoise-speed (7?)! 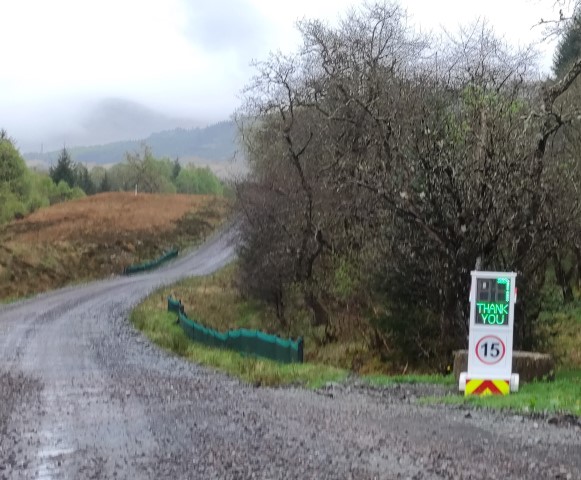 I am not walking quite this fast

We decided to go past Succoth and up the 'track' above the river. This is now a path, but it did indeed give a lovely route far superior to a wide forestry road. The birds were singing, trees coming into leaf, and there were just a few fallen trees and wet patches to negotiate. We popped out of the path onto a new pylon track which can be followed all the way to the edge of the forest. We thought of walking along the old atv track but soon abandoned that idea as it wasn't at all obvious. The new track started not too wide, then further up we rejoined the main truckway. Both tracks though were nice underfoot, smooth in many places. More stepping aside and waving at trucks.
Just before we set off across country, there was a layby lined with large stones, which made a good snack stop. The low cloud was lifting as promised and we could make out the steep grassy ramp leading between the twin summits of Meall nan Gabhar. We hoped that the top half was foreshortened! The first bit was across grass peppered with anemones. 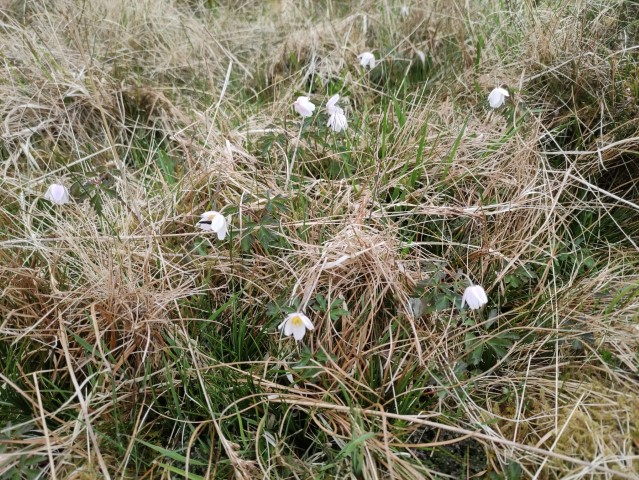 Anemones amongst the grass

The second bit didn't feel foreshortened, though it was mostly well within my comfort zone.
When we popped out of the ramp and onto the twin tops, no cloud for us, but most of the surrounding peaks were obscured, except Ben Oss for some reason. We moved across to Meall nan Tighearn for lunch, it would probably have given a stunning view of the Glen Falloch hills on a better day.

From Meall nan Tighearn, we could see our next destination, Beinn Bhalgairean. We worked out that if we headed straight for it, that would be about right. The intervening ground was very indeterminate, it was impossible to see where the burn went in the flattish area. We found one bit of Purple Saxifrage which we haven't seen for many years. At the edge of the forest we found the gate described in the SMC book NN 216239 (recommend this gate), went through, and followed the rather neglected track downhill then up. We had realised that it would be ideal to cut through from our track to an upper track, where they were very close. In the event, there was a track to join them. We then headed left almost to the end of this track, where there was a very short track going off right leading to the open hillside.
We started uphill, and made a rather wide sweep to find the gate in the next deer fence. However I can report that it is not worth the detour, the fence has been replaced, and they have not bothered to put any gates in it that we found. Good tension for climbing it though! 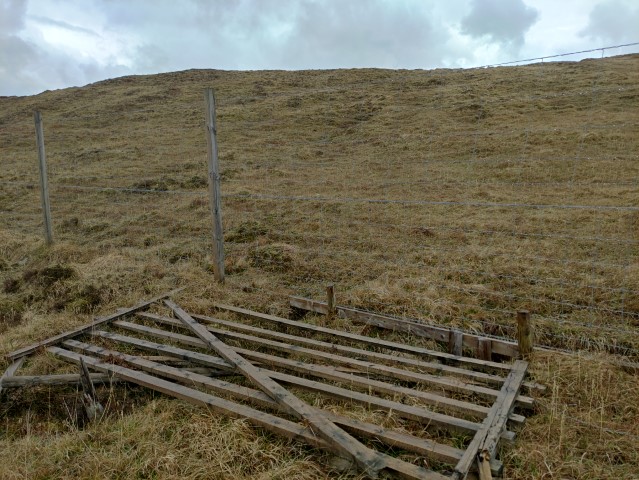 We made our way to the second set of twin summits of the day.

View of Cruachan approaching BB summit. The view did not last.

We had a quick snack, then headed straight back to our final ascent track, since that was easy walking. We found a different large post to climb over by. We also decided to return by our ascent path above the river, so cut down to the track leading back to the pylon line by following more overgrown track and then a break in the trees. Sadly by now the rain had started, and the rest of the journey was done in waterproofs. A few birds were still singing though.

Looking at the map, these two hills look like a lot of forestry tracks and we weren't particularly looking forward to them. But we enjoyed our day, with the tracks being of varying quality to add to the interest. Just need to go back for the views.
Here is our approximate route


The year of broken bridges?

A bothy for angels?