We'd tried to do this hill a short while ago, only to find that the road (and the forest track too it turned out) was closed for logging during the week. So we were very pleased that we managed to be in the area on a Saturday. We drove up the road and parked at the end of the track. We had to dodge round a locked gate, full of No Entry, Logging signs, but since it was Saturday there was no action. We started up the track, getting a close look at a tree felling machine. The track was initially freshly made hard core, but fortunately it soon became much grassier. Even when the track turns into a footpath on the 1:25000, it is still a track, which takes you to the edge of the forest just when the onward track really does become a boggy path. 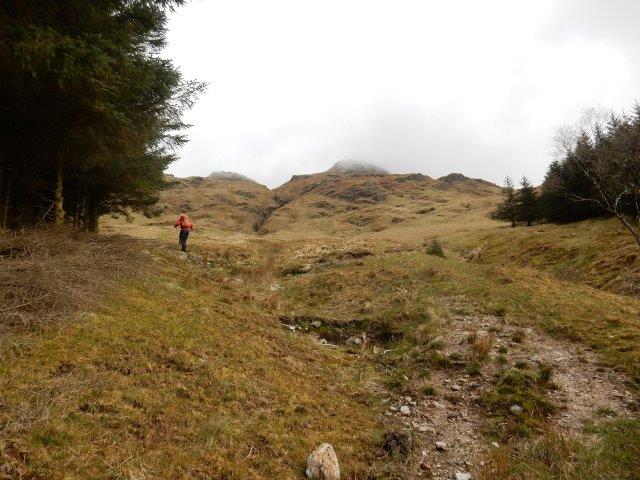 Coming out of the trees, we have to go up there! Good views back to Loch Goil

The way up was a bit daunting, we started going to the right then heading leftwards, and although it was all steep, there were only a few small stretches where we wondered if we had made the best choice of route. And once you're up, you're there. 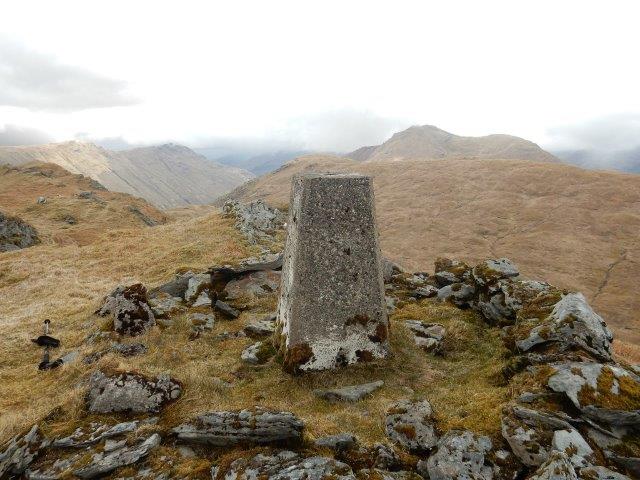 Summit views of Beinn an Lochain and Binnien an Fhidhleir

Luckily the cloud had cleared. We continued on along the knolly ridge, it was delightful to have easy but interesting walking. When we looked back, we could see part of the cliffs. Looking back at crags along the ridge

It began to hail a bit, and the Hare muttered that a howff would be good for lunch. Almost immediately, we found a little overhang, just room for two. So we had to use it for an early lunch. 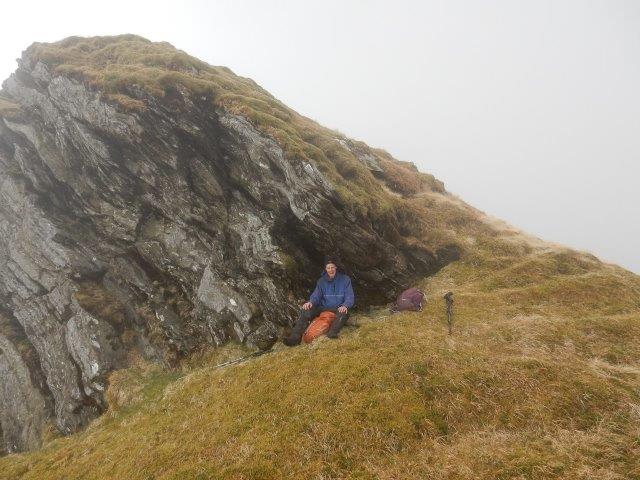 Shelter from the hail for 2 at lunchtime

Then we continued down the ridge. At the bottom, the weather was clear again, so the Hare decided to continue over Beinn an t'Seilich. He reported that it was a good route, pleasant easy walking with an impressive drop off into the valley on the far side. I was feeling a bit tired after the day before, and returned down the valley to the path.
Here's my approximate route. I think it might have been possible and more interesting to have stayed higher nearer the cliffs on the return, but I was alone and decided to play it safe and head for definitely easier ground.

Oh I do like to be beside the sealside