Here’s my first report of my adventures out on the hills, hope someone might find it useful or interesting. I completed the walk a few weeks ago and wrote it up but I have been away so finished it off, added pictures and just posted it up now.


So managed to assemble a troupe of boys keen enough to come with me to The Old Forge Inn, the most remote pub on mainland UK this last weekend. The plan was to convene in Aberdeen Saturday morning and drive up through Craigellachie, Aviemore and Fort Billy to park at Glennfinnan. Packs on the back and take the bootlace express to Loch Arkaig and camp for the night. Day two to Sourlies bothie and day three over to Inverie for a cheeky pint. Up early doors on day four to get the 9am ferry across to Mallaig to get our connecting train back to Glenfinnan then drive back to the dizzy heights of Aberdeen, totally doable!

I managed to convince two of my buddies that walking for nearly thirty miles through the hills with 10Kg on their backs in the rain would be a hoot! We met at 10am and after some obligatory farting about and the usual bumfluffary we leave an hour or two later that would have been ideal but no matters, we’re on the road now! More stops at Aviemore for diesel, fags and booze and of course a big feed and then we were off again arriving at Glenfinnan for what must have been about half four. 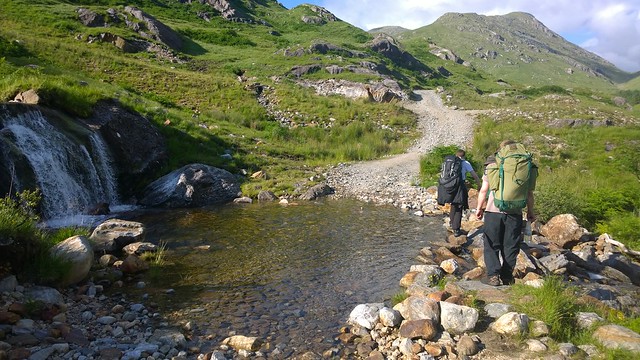 We park up and grab our gear and head off under the Glenfinnan Viaduct in superb weather, wasn’t long before we had the taps aff. My two buddies steamed ahead and about a mile or two into the glen they were motioning back to me pointing across the river to the other side of the valley. I had absolutely no idea what all the excitement was about but as I got closer there was a bike left by the side of the path and some way over on the other river bank there was a girl sunbathing topless (face down of course). It was a peaceful spot and it was good to know everyone was out enjoying the sun as much as we were! 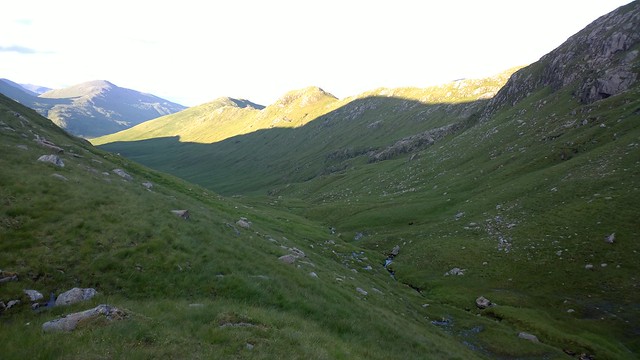 I caught up with my buddies and we crossed the bridge and began out ascent. Now, perhaps I should have advised more strongly against it but my team mates were carrying four tinnies each and a half bottle of gin in a glass bottle. I was trying to shed every excess gram from my pack but they assured me they would be fine. As we progress down the declination the path becomes wetter and wetter, the weather has begun to cool and is looking overcast. The path degrades further and boggy patches become increasingly frequent. When the terrain levelled out that’s when the fun really started. Pure bog city! Within no time at all there was absolutely no discernible path and mucky, boggy sinks were rife. Lovely. There were bike tracks through the mud so some lunatics had been doing some extreme bog biking! I was in my ankle hight boots but my comrades were in track shoe type boots which were little more that glorified trainers. The bog easily defeated them and they both had soaking wet feet by supper time. Hmmm, nae the best start to day one. We stopped for sandwiches which, due to my secret ingredient (extra mayonnaise) tasted amazing and momentarily lifted spirits. Massively impeded by the bog and cause of our slightly later start it was beginning to get dark and even though we were close to where I had planned to camp we still had to traverse what would be the toughest challenge yet.

Jeepers, all jokes about snorkelling aside you could almost literally swim this section and the path was completely non-existent. There was up a warning sign dated earlier this year saying people had died here and to take care, the writing had been sun damaged so the message was difficult to make out and I was unsure if there was any truth to this or not? We were within earshot of our night’s camping destination at Strathan so pressed on. Just beyond the first sign there was a second one advising us to skirt around the worst of the bog and to follow snow poles which had been erected with orange markers on them to direct the safest route. 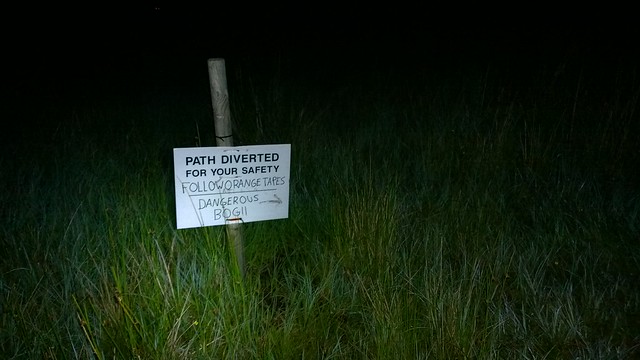 Undeterred we press on until.

My right foot gets enveloped up to my knee by the turbo bog! I yank it out as quickly as I can and the layers of my trousers against my boot and the tight laces must have stopped the ingress of water from flowing over the top of my boot quick enough for me to yank it out cos miraculously, my foot still seemed dry. Dodged a bullet there, I really dinna fancy wet feet right now. We wade further through the bog at an unimaginably slow pace and eventually reach the bridge and a wee house perched atop the all-pervasive bog.

At the house there was a party of a laughing excited girls screaming as they let off fireworks and even thought it was dark we could see at least a dozen people partying around a bonfire in the back garden. It was quite a set up they had going, loads of jeeps and cars outside and a growling generator which was reverberating around the glen. It obviously didn’t look like anyone’s permanent residence but looked a private holiday home or a rented mountain retreat but either way in the dark and bog we had absolutely nowhere else to pitch up so we asked if it was cool to camp in the grounds. Spoke to one of the lads there and he was a right topper, his dad I think owned it and took us down to a spot on their grounds that wasn’t boggy. We thanked him profusely and set about erecting our tent for the night. My two pals feet were absolutely sookit and looked like that had been steeping in the bath for 4 hours. My guardian angel must have been looking down on me my feet, apart from mild moisture from sweat, were dry! These boots have been worth every penny, wellies couldn’t have done better.
Last I looked at the time it was quarter to one in the morning. Felt like a relatively long eventful day.

The start of day two was wet. My mates got up and poured out their beer to save weight. Maybe I should have pressed this issue the previous day but never mind. The rubbish bag was now gaining a weight but at a net loss. A hefty dose of porridge later we were buzzing and half way up Glendessarry. Loads of laughs about the previous day’s escapades and the wet stinking feet which had fermented overnight and were now wafting a venomous bouff with every step and squelch. We pressed on, the path was very wet and boggy and most of the wildlife must have been hiding. 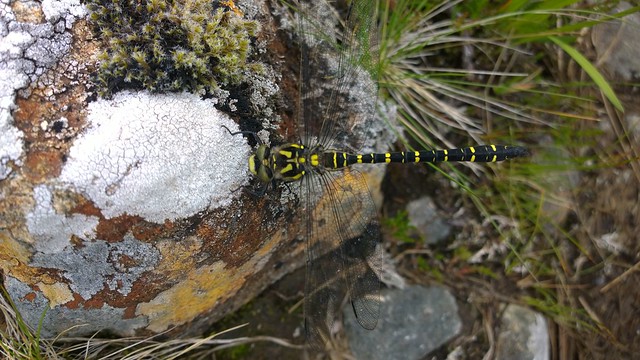 The rain stayed off but everything was wet and overcast. We met a handful of people along the way but there was a noticeable attrition of our spirits. A few sips of single malt motivation soon sorted that out and we were back on our way! 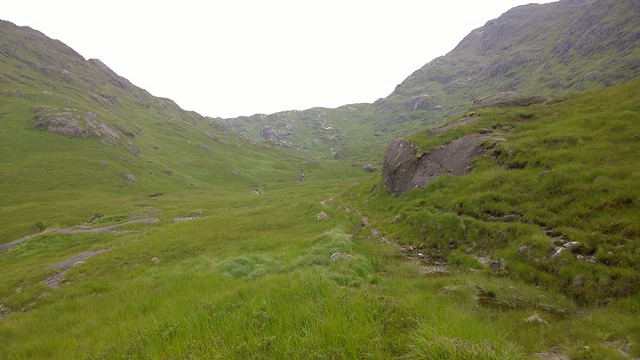 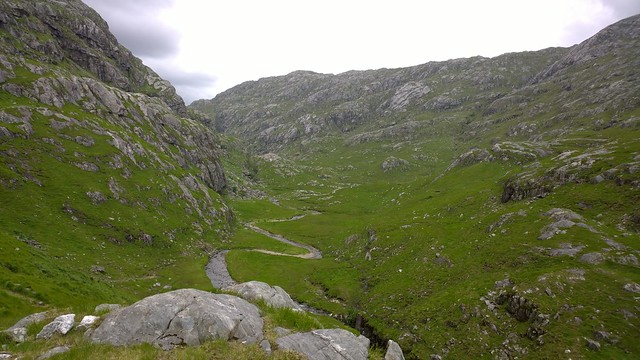 We had forded many small streams so far but on the decent to Loch Nevis a substantially larger and more aggressive stream had to be traversed. Apparently in high rains a few years back group of walkers got swept away crossing here. Thankfully a robust bridge now exists. We arrive at Sourlies bothie and share it with a Canadian and a guy and his ten year old son. The young lad had actually carried his miniature guitar (6 string but tuned to A) with him. The bothie was well kitted out and among the accoutrements was a nylon stringed guitar. We got the fire going, got the drams out and I grabbed the other guitar and had a jam with the young lad who was an excellent wee blues player! Great night there, everyone was good craic.

The next morning our musician friend and his dad had left early so we shared breakfast with our minimalist ultra-lightweight Canadian buddy. He was heading up to Cape Wrath armed with little more than a bivvy bag and was snorting protein meal replacement power for 20 odd days straight. Sure he appreciated a hot cooked breakfast. Now a party of four we head off together before we veer off at Carnoch and ascend west. 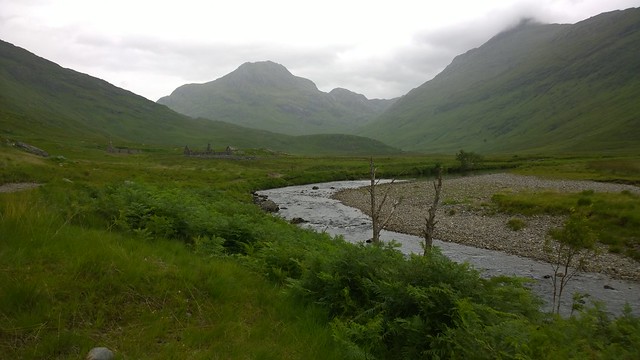 As the tide is out so to avoid the bog we leave the path and skirt round the shoreline. In doing so we miss our foot bridge and continue for about an hour on what is essentially now the wrong side of the river looking for somewhere shallow to ford across. Nowhere was looking good with slippery rocks and heavy packs without getting wet. Faced with retracing out steps or taking the boots off and going across barefoot we decide to retrace our steps. It was early in the day and day three was to be out shortest day so and hour or two’s detour was all part of the fun. Our Canadian buddy chose to press on on this side so we said our goodbyes and headed back and crossed at the bridge.

We stop at the ruin at Carnoch and say hi to these bonny lassies. 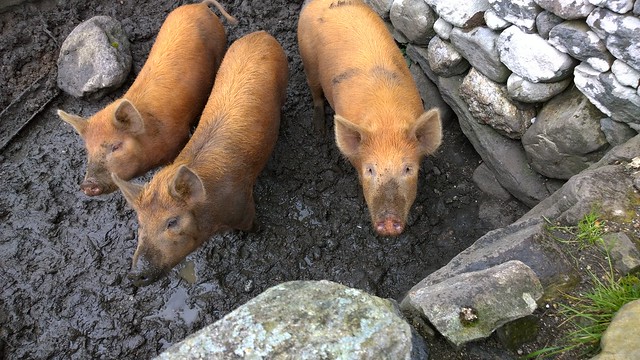 We momentarily loose the path in the overgrowth behind the ruin but soon re-join it and begin our ascent. We zigzag to the top and at the summit are met with the most inspiring view right down the glen way out to the Atlantic and most importantly our destination at Inverie. Photos don’t do it justice but it was great after a few days walking to see the end point, and it was literally, all downhill from here! 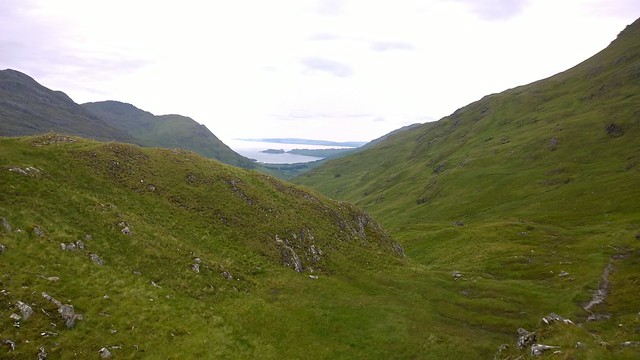 The wet weather could do nothing to dampen our spirits, we we’re off! The last two hours or so flew by. We arrived at the long beach campsite and got the tent up and head for out well earned feed and pint. We had our table booked and good shout cos the old Forge was packed. We spent a fortune had a total hoot and were there very late

Stumbled back to the tent at daft o clock, mission accomplished, walked to Brittan’s most remote pub, got pished, had a blast over last three days!

Day four started about 7:30am. I had booked the return ferry to Mallaig at 9am to get our 10am connecting train back to Glenfinnan. So compared with the previous three days it was just plain sailing from here. 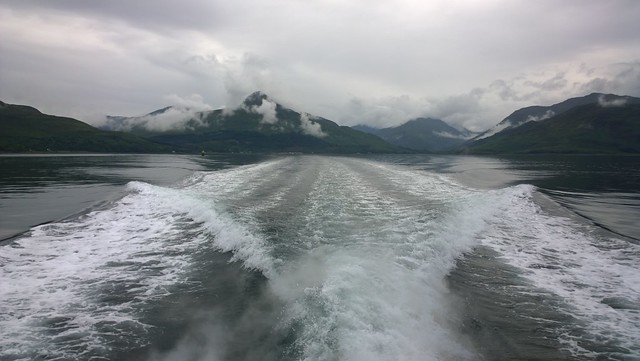 Ferry across to Mallaig, breakfast, on the train, off at Glenfinnan, back in the car to Aberdeen. Boom!

I’m off to do some jungle trekking in Chaing Rai, northern Thailand in a few days so this should serve as a good warm up!