Into the cloud on Meall a' Ghuibhais

I arrived in the car park at 11.00am to start the walk. Except I didn’t as I was in the wrong carpark, which was a sort of harbinger for the whole walk. I was in the visitor centre car park instead of the one at the banks of Loch Maree. Right then, back in the car to the real start.

The car park at NH 001 650 was busy, so I was going to have a lot of company! No – I was the only one who made it under the underpass and on to the Mountain Trail. 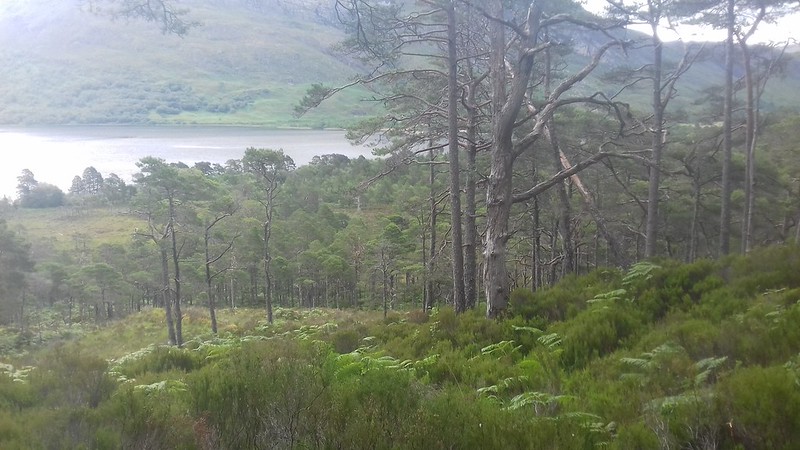 The early part of the walk through the ancient woodland was beautiful and the path stayed close to the burn. 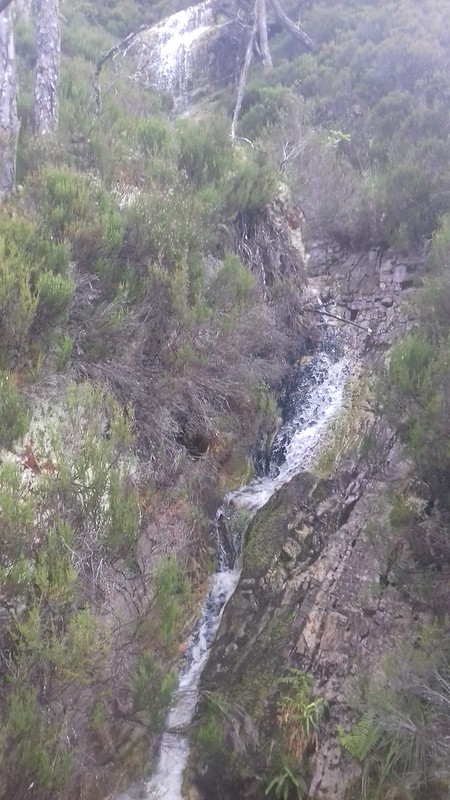 Numerous signs accompany you up the ascent with the words inviting you to pause. 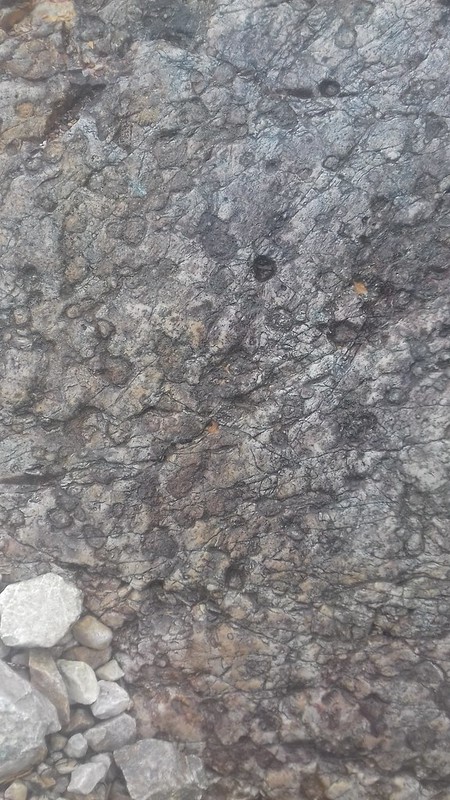 After a ford at NH001 642 the path becomes much steeper and the blocks of rock were slippy. According to my app I appear to have deviated from the path at one point, up predictably steeper land. After a rocky outcrop – quite hands on this route in places, the gradient eases giving great views to Slioch.

Greater areas of quartize predominate after this climb and the highest point of the Mountain Trail was reached where I had a sandwich. 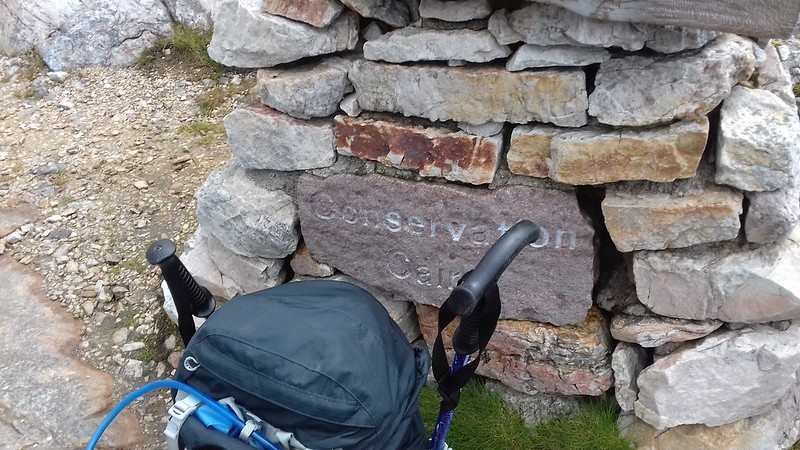 If I am honest I wasn’t really enjoying this day.

My feet had a mind of their own which did not involve walking and I think I needed a day off. This was my last day in Torridon before heading south but I was determined to fit another walk in before I reluctantly headed back.

From this vantage point Meall a’ Ghuibhais was cloud free but that was to change. Apparently, this mountain is geologically the opposite of Ruadh-stac Beag. Meall a’ Ghuibhais is sandstone on top of quartzite built during the great thrusts at the creation of Torridon. Ruadh-stac Beag was the only clear mountain on the west of Loch Maree as the ridge of Beinn Eighe was in cloud with only the lower slopes visible. 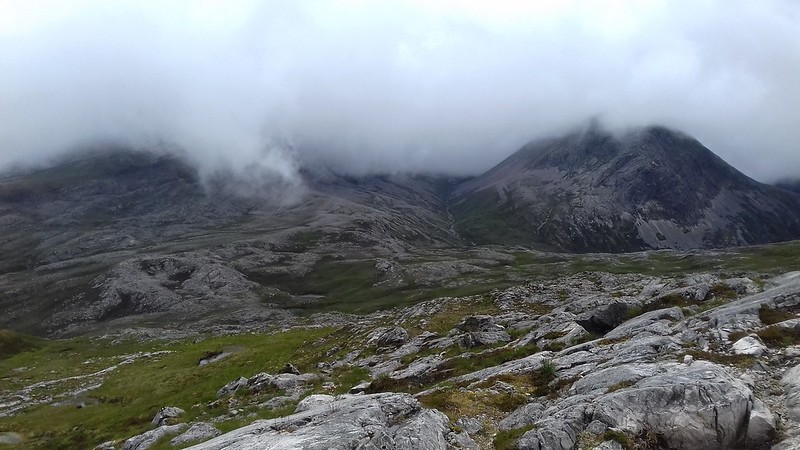 I managed to walk past the obvious cairn by the Lunar Loch and had to backtrack.

I then made my way to the lower slopes at NG984 635 and began my climb. This was quite a tough climb, the ground was loose and steep up to the outcrops at NG979 636. As I had been climbing the cloud had descended from about 700m and the mountainside felt very bleak. I had seen no other walkers. Unlike my fear on Suilven a few years ago I am glad to say I have become much more confident about being on my own on a mountain in poor visibility. I am never complacent though and there is still something uncanny about these conditions. 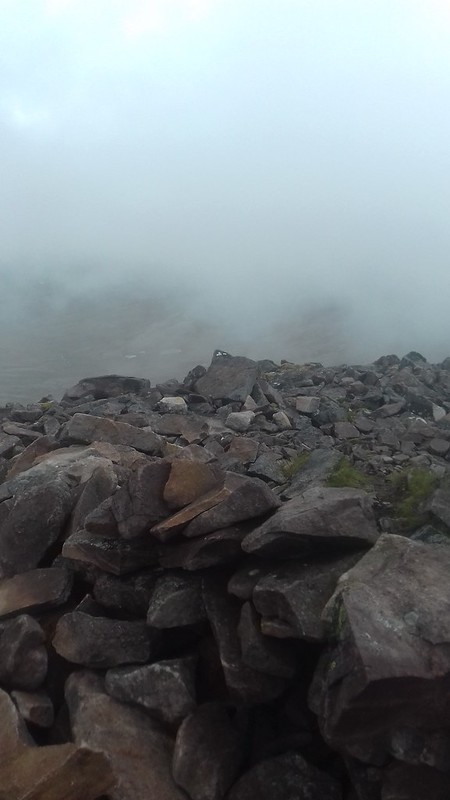 I navigated myself successfully to the summit but there was only one tiny shifting glimpse of the marvellous panorama; I took a few photos and headed back only to be buffeted by very strong winds which for a while made walking difficult. I then managed to stray too far North East that brought me to some precipitous crags that I hastily retreated from and then back to the outcrops and the increasingly clear sight of the Lunar Loch below.

The descent to the loch was tricky and slippy. I rejoined the Mountain Trail path where I promptly slipped and plugged my right leg deep into mud/bog.

It wasn’t long before I fell again on my backside

and twisted my walking pole (fixable). I chatted briefly to two walkers and headed quickly back to the car park. Not quite the walk I had expected, but then they never really are. It was then a matter of heading south: A832/835/832/833/82 to Crainlarich through the eerie gloom of Glencoe and Rannoch Moor;a reluctant departure from Torridon.
Click to mark this as a great report. Register or Login free to be able to rate and comment on reports (as well as access 1:25000 mapping).


A view from the ridge:Beinn Liath Mhor/ Sgorr Ruadh

Beinn Alligin:Horns on the Fourth of July

The magnificence of Beinn Eighe

A fine day for Foinaven