Having read many walk reports I had yet to complete one myself and felt it only right to share my own experiences. I did try once last year and failed badly because I could not master importing the photos and then found the thread instructing those of us that suffer IT issues.

Inspired by Mountainlove and her 2 day jaunt and also Dooterbug before her too, I looked at this and considered I could squeeze all 5 in just before the clocks go back. I arrived at the car park and set off immediately at 0830 hours raring to go, there was only car there and being midweek I didn't expect to meet many people. The path leading to the loch

The landrover track leads to the head of the lock before you break right and gather some height which affords good views of the crags in front. The path was quite sodden and was a good test of my new trainers Solomon Speedcross 3. Visiblity was excellent and I could soon see the summit and had fantstic view accross the Nevis range to my right (less the Ben). I could also see across the loch on the left to Stob Coire Sgriodain, it already felt like I would have an epic day on the hills. In the direction of the Grey Corries The way ahead from Meall Cian Dearg

Within an hour the clag had came in and sheilded the 1st summit and I was in a right huff thinking of having to suffer 5 peaks in poor visibility, but on reaching SaCM the clag faded and I had impressive views again of the Nevis range and the lovely Autumnal colours that make this time of year special. The clag sets in

As is normally the case for me, I did not stop at the summit and motored on up to Stob Coire Easain which did not take very long. By now I could not really see down to the loch as the clag had literally settled on the edge of the ridge looking like a bowl of steaming grey soup. Down to the loch side

From here it was an enjoyable walk down the ridge to the glen, again excellent views now to the front and the head of the loch slowly came into view showing the route round to Beinn na Lap. It was around 4 kms to lose all the height I had worked hard to gain, but when I finally got the bottom it was really nice indeed and I had talked over with my Mrs about camping over night. Down the shoulder of Stob Coire Easain As I was avoiding some crags at the end of the ridge I suddenly came across about 30-40 vension burgers all just as suprised to see me as I them. Then I as finally reached the valley floor where there was a really good view of Creag Ghuanach to my front and low and behold just to top off an already great day I see a lone Golden Eagle at the summit. It was there for ages and this is the only time I managed to get a snap of one out of all those I have seen. At the foot of Creag Ghuanach 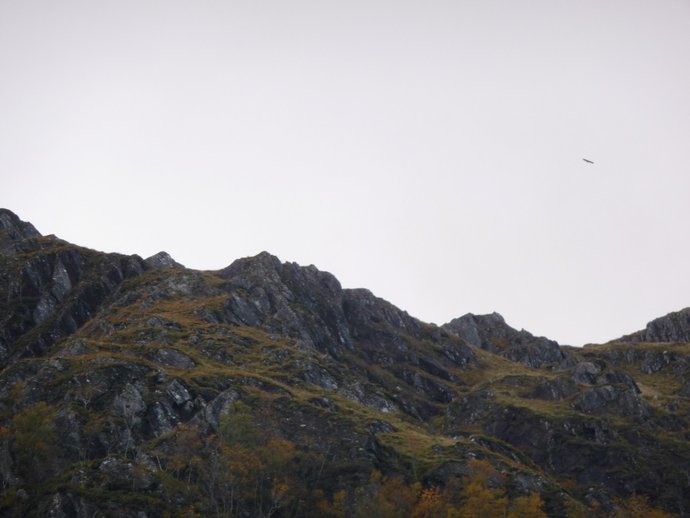 By now I was really happy with the trainers, they are Goretex and had never let a drip in despite tramping up the sodden path at the foot of the first summit. However, now I had a wee test of my balance and what often appears for us hillwalkers, the National sport of burn jumping and for me I normally fair very well, but on this occasion, I put my foot right in it (ahem!).


I had sight of the wee cottage at the head of the loch I had seen pictures of before, but before you get there, a short section of path leads you through a small gulley like the set of Pan's Labyrinth!! At the top of the loch I seen two North Face tents, but it seemed no one was at home, I had cursory look around and made off in the direction of the railway line crossing the new bridge and also admiring the excellent views all around. It is a really, really nice spot and with all the great Autumn colours around it felt quite isolated, but then a good path soon appears making way for an ugly track that leads up to the railway line. The nasty Troll lies beneath

It was here I met The Oracle and his colleague whom I believe was from Spain. He was a local man who knew everyone and everything; now I rarely stop for more than 2 mins, but had a right ear bashing of this fella regaling me with all his stories of which I am sure he had many. As I had thankfully failed to pack my sleeping bag, I had to make my excuses and duly bade him farewell and pressed on up the steady hill to the trainline. Before I left he told me of an older gentlemen who obviously lives in the two tents on a permanent basis and apparently walks to Loch Ossian every night and back to get blootered, no matter what the weather is. I never did meet that hardy wee soul, but then I suspect he lives there and does not necessarily want some company. The loch and back to Easain

By now it seemed an age since I last stood on a summit and there was a fair trek to the start point of Beinn na Lap. It was only when I made my way under the railway bridge, that I finally stopped for my first drink and a wee bite to eat. I checked my map and was working out with the available time left and distance still to travel that this walk may be a tight squeeze.

Onwards and upwards I plodded to the summit, a long steady pull up to the summit it was, with no real track to speak of, occasionaly, I found a trace of something, but it was a bit of a trudge over the grass and cold enough at the summit to don a hat and gloves for the first time. Finally ascending after the long trek between 2 and 3

On the way up I could the station at Corrour for the first time and the other two Munro's which were next on my list, Carn Dearg and Sgor Gaibhre. Save the railway line, this area is really quite remote, but would be a great day out on a mountain bike which you could cover a great amount of distance on good tracks. Ptarmigan getting their winter plummage At the enormous summit cairn I could still see a pumpkin sitting there and here I stopped briefly to check my map and intended route up Chno Dearg which loomed right in front of me. I decided to lose height quickly and diaganally to take a route up the obvious right hand shoulder to where the summit stood about 5 clicks due north. I lost height easily, but also found the light fading fast as I rapidly descended into the massive u shaped valley below and the first real doubts entered my brain that I would be tramping back to my car in the dark. The steep pull up to Chno Dearg

At this time I still had my new trainers on and my soggy sock had long since dried out. I had thought of putting my boots on a few times as I went down the tussocky grass, but thought the trainers would aid my speed on the other side. It only took me only 40 minutes from the very bottom of the valley floor to get to around 900m at the top of the right hand spur. I was flagging now and needed to eat more, which I did on the hoof and once at the summit of Chno Dearg had a quick look at the way I came from to the last peak and started running all the way down to the triple bealach and then walked and ran from the 924 m spot height to the 954 m one, but my hear sank as there was more height to lose again, albeit it briefly before arriving at the true summit of Stob Coire Sgriodain. Now I could see Loch Trieg once again and some lights on in Fersit. I had around 35 minutes before the lights went off and knew I would be in the dark after all. So I sought to lose as much height as I could quickly and put the summit behind me. Here I made use of the paths and ran most of the way down to the end of the northern shoulder before I choosing a steep route to the right, just after the 75 northing. I could now see and hear the burn, fed from the lochan behind me (which I never had sight of). I was happy now and knew handrailing this would see me out to the road soon enough.

The burn eventually split into the 3 and here it went all dark, but I was fine by now and still motoring, running now and then as it was almost flat, just very wet and soggy. I had been running through big puddles and endless small burns so I was no longer bothered about trying to keep dry and my feet were soaking, but in otherwise good shape after knocking in over 30 klicks and 5 summits . Loch Trieg was the ultimate kit test and I was to wear my trainers for the next 25 odd hills, right up until late November.

When I got back to the car the air had turned icy cold quite quickly and my feet were blister free. After a quick wash and change I was on the road heading for the golden arches of Fort William where I wolfed down my annual trip to McDonald's, still sucking on my thickshake as I entered Gelncoe reflecting on my best day in the hills of 2014.

I was quite pleased with 10 and a half hours, especially at that time of year when I could not afford too many stops, although I can still hear the Oracle telling me, "And there was this time................"

That was an epic day in hills, but really best saved for a long summer day on reflection; or better still, camping at the head of the loch and heading over to see the craic at the Loch Ossian youth hostel.
Click to mark this as a great report. Register or Login free to be able to rate and comment on reports (as well as access 1:25000 mapping).