Wet and wild at times, Visibility variable, Wind 225 at 25

After missing these two out of my last tour up Glas Maol circuit, parked at the Devils Elbow car park 2km south from the ski centre. NO139757


activity_8866185532.gpx Open full screen  NB: Walkhighlands is not responsible for the accuracy of gpx files in users posts

It started dry and warm as we followed the clear path, as on the map, but very soon is overgrown as you head NE up the south ridge of Leacann Dubh 144755. Looking west towards the A93

The path comes back again as the ridge levels off NNE up towards the mountain hut at 145768. From there its a good landrover track up to the ski tows for Meall Odhar. Take a right E at 151773 up to the Top of Meall Odhar. 922m

From Meall Odhar its a well marked path SE towards the summit of Glas Maol. 1068m This is where I turned round to see.. absolutely nothing behind me as the first front of the day moved in. The first of many and it was a mad dash to the shelter cairn to get out the outer shells and take cover for a bite to eat. Hence not many photos today From Glas Maol take a SW bearing along the path to Bathach Beag. Looking back towards Bathach Beag and Glas Maol beyond The climb up to Creag Leacach

Up to the summit of Creag Leacach. 987m. Blink and you'll miss it.

Visibility was coming and going through the squalls all the way between the two Munros, but from the top of Creag Leacach it was a straightforward down and up to the SW Top. 943m at 149742. 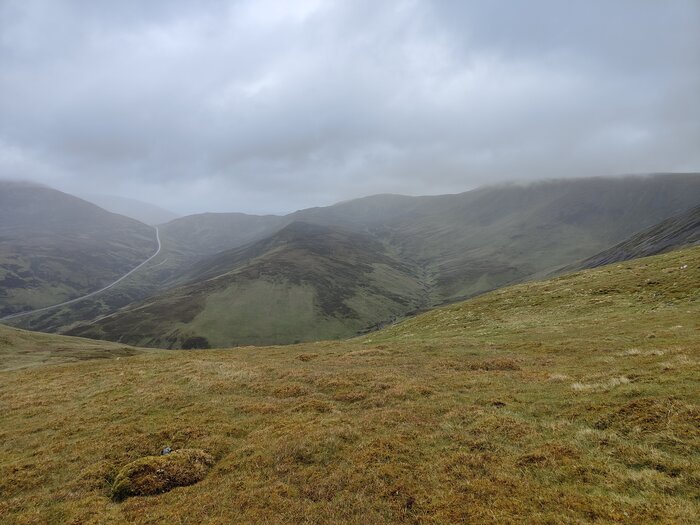 The decent from Creag Leacach was right into the face of the wind and rain. Im glad my 20+ year old Berghaus Axis ProShell was still up to the task

The route off and back to the car park was a heading WNW aiming for the elevation marked on the map at 716m 142745 to pick up the overgrown path. Then heading N down the flank of Meall Gorm towards Allt Coire a Bhathaich and finding a spot to cross. The paths marked on the north side of the stream on OSM maps are almost completely eroded away, landslip from recent storms and trees that have slid into the water. It took 20+mins just to do this 1km back to the car park.
Click to mark this as a great report. Register or Login free to be able to rate and comment on reports (as well as access 1:25000 mapping).