Yorjick's last Meall (of the year!)

During my New Years Day 2019 ascent of ​Beinn Mheadhoin, I had looked across to Meall na Faochaig and thought what a good hill it would be to do on New Years Day 2020. Looking at the weather forecast, it looked like the best weather would be on New Years Eve with winds developing later in the day. So I went a day early.

Both walks start from Inverchoran. In fact, this was to be my third walk from Inverchoran and I feel that I am becoming quite familiar with this relatively unknown glen. There was a Grampian TV series called Strathconon: A Glen For All Seasons and it can be viewed here: https://www.youtube.com/watch?v=CXJU1iQ0oME. It was filmed in 1996, when I was in my prime and completed the Munros. Back then, I was totally unaware of the wonders of this glen. Why would I be? There are no Munros! At least, it is fair to say that it is not an obvious starting point for bagging Munros as there are much shorter approaches, even in the case of Maoile Lunndaidh, which is best approached from Craig on the A890.

Driving along Strathconan, a lady flagged me down as she had a flat and wanted a lift to a small disused chapel further up the glen. She commented on the fact that Strathconon is close to Inverness, yet has the characteristics of a western glen. I would not argue with that. I am never sure of the local feeling about where I park but a 4x4 pickup arrived from the farm and the man inside waved, so I guess I must have been alright. I remember that the man from Corriechoille was once concerned about people parking on his grass before heading up into the Grey Corries. I'm going back over twenty years ago.

Just as I was setting off, a man arrived. He had presumably parked at the cattle feeding station a few hundred metres away. I am always interested to hear about other people's plans. "Bac an Eich and then hopefully the other two across the way". Depending on the route, I reckon that has to be 20+km and 1800+metres of ascent. Pretty good going with so few hours of daylight. I am not as fit as I used to be and 7km and less than 600m suited me just fine. I could be back home before nightfall!

After walking about 250m along the road, the track heads up right at a nice angle, making the first half of the ascent quick and painless. This switches back almost as far as Creag Lucharaidh. On reaching Creag Lucharaidh, there are a number of structures including this one. Does anyone know what it is?

Is it some sort of triangulation pillar or the mounting for a TV aerial? Perhaps TV aerials are now defunct in the digital age with internet TV and satellites? The date on the base was difficult to make out: 23 July 198?. 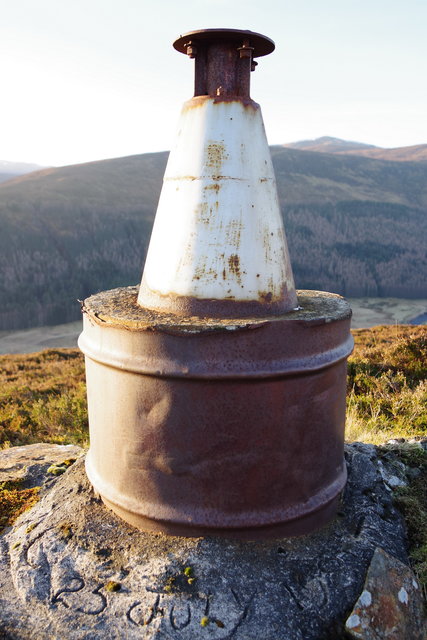 Looking west across Loch Beannacharain, I could make out Liathach in the distance. Retracing my steps and heading up the spur up to the Meall na Faochaig ridge, I noticed this little fella. I guess that he was fooled into thinking that it was the springtime and crawled to the op of the heather to sunbathe. After doing a little bit of research, I think that it is a Fox Moth caterpillar. Is it the same species as this one taken from wikipedia? It was reasonably easy going, even without a path. The photograph below is looking southwest, with Bac an Eich left. Maoile Lunndaidh is also just visible.

While I do not share the world's obsession with selfies, I do like to take a summit photo. I have very few photographs from my Munro bagging days, to remind me of when I was young and fit. I do want to have some record of my time in the hills and having a photo of myself at the top of the hill to remind myself of the man that I was will put all the other photos into a personal context. Perhaps, the fact that I have few photographs from my first 20 years of exploring the Highlands and very much wish that I have more, means that I make an extra effort to make sure that I have a photograph on each summit that I climb. Sometimes, there is an obliging fellow walker and sometimes I use the shutter delay on my camera, but on this occasion, I connected my phone to my camera (via WiFi) and used it as a remote shutter release! How things have moved on! climbed Meallan nan Uan and Sgurr a'Mhuillin in July 2001, about a month or so before my best marathon time of 3h 17mins. I considered myself fit. Starting up the hillside I met the Head Stalker, who was out counting the deer. I asked him if I was alright following my intended route. He was absolutely fine about things. he just asked me to keep to the ridges. Thin as a rake and wearing running tights and fell shoes, I was sure that I would soon leave him behind, dressed in his tweeds, but looking across the slopes he seemed to be gaining height just as quickly as me! I suppose I was always quicker running along the ridges and down steep grass and moss. Perhaps he knew of a slight path that I could not see? Just to rub things in, he stopped for a smoke!

​In my copy of "The Corbetts And Other Scottish Hills", my entry says"Missed out Sgurr a' Choire Rainnich and Sgurr a'Ghlas Leathaid due to slightly unpleasant weather. May be worth going back to do in my old age". When doing the Corbetts, although prominent features, I did not really consider them to be of importance in terms of "bagging", but it seems they are in fact Simms, Corbett tops and Yeamans. Sgurr a' Choire Rainnich is also a Hump

. Clearly, they are both of a higher status than I thought! Once I have rounded up my remaining 14 Corbetts, these will be elevated towards the top of my things to do list! My eye is always draw towards them when travelling south-east from Achnasheen and often thought it would be nice to have a summit camp and watch the sun set over Torridon.

Is that Fionn Bheinn to the left?

Looking in the opposite direction, into the sun in the southern sky, there was a clear view of the Glen Strathfarrar Munros. The sun does not rise very high in the sky at this time of the year! Descending the steep southern slopes, I was curious about this relatively flat area, apparently surrounded by a ditch. I could not see any ruins or signs of a settlement. While I am no archaeologist, I am thinking that it must be the result of some historical human activity. At this point, the gradient was easing and it was easy going, considering there was no path, and I was soon back at the car, feeling satisfied with my modest achievements. I'm thinking of returning to the area for the Graham, Carn na Coinnich next New Year!
Click to mark this as a great report. Register or Login free to be able to rate and comment on reports (as well as access 1:25000 mapping).