I woke up early, had a light breakfast and ONLY THEN decided to go out and do a hill. This shows the advantage of living in the Highlands!

When "mopping up" the remaining Munro tops, I ran Sgùrr na Lapaich and ​Càrn nan Gobhar in 2000. I was at my very fittest and was doing it in a good time. I was close to reaching the road when my foot landed badly and there was the sound of crunching gristle. This was the first day of my annual summer trip to the Highlands which would end 3-4 weeks later with the Glasgow Millennium Marathon. I had never felt so good and was expecting to bag a lot of Munro tops and the plan was to add to my fitness, leading to a personal best in the marathon. As it was, I had to rest up for several days and then limp/walk very carefully over some lesser hills. It still was not 100% better when I completed the marathon in my slowest time of just over four hours.

I did An Socach along with the Graham Carn na Breabaig from Glen Elchaig during a Walkhighlands weekend.

So An Rhiabachan had not been climbed as part of my second round. I had long thought about approaching it from the Glen Strathfarrar side. I had driven as far as the Monar dam before but I could not remember if it was possible to drive across the dam and get closer to An Riabhachan. On arrival at the glen, I checked with the man at the gate and you can drive all the way up to the installation shown below. In fact, I think that you could continue along a stony track for a little bit further, to knock off 10 minutes at each end of the walk. 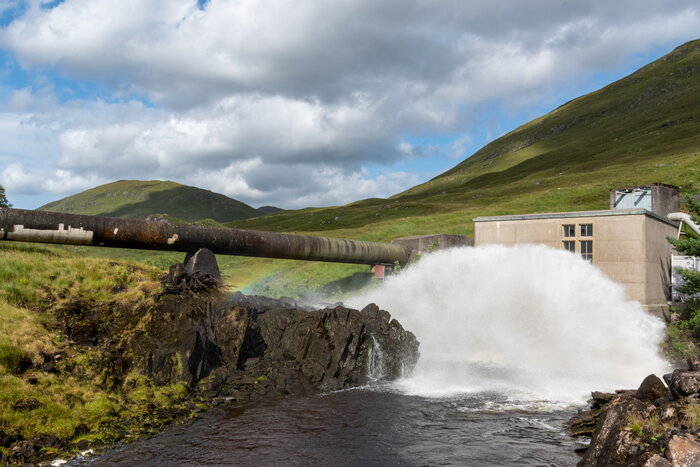 I was aiming for the stalker's path up to the two lochans. There is a track that forks left, but I missed the small pile of stones that marked the junction. I was probably too busy taking photographs, so I missed it and had to cut across boggy terrain to connect with it. This was not a big problem and added very little extra effort to the overall day. I have not included the photograph below for its artistic merit but so that readers know what to look for. 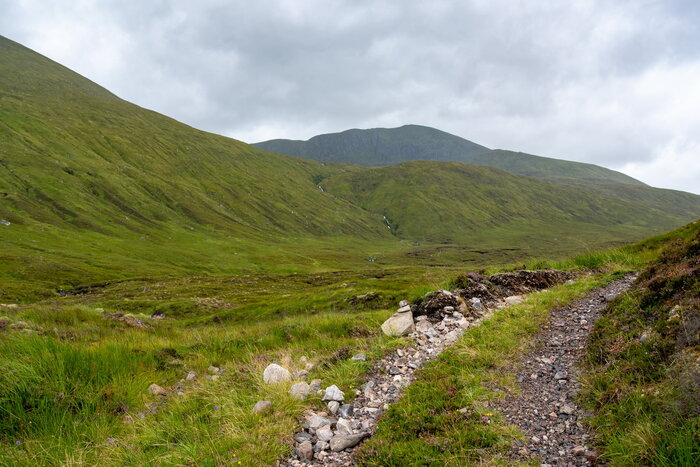 The day's objective of An Riabhachan lay ahead though the actual summit was out of sight. Here the gentle rise of the stalker's path is visible. 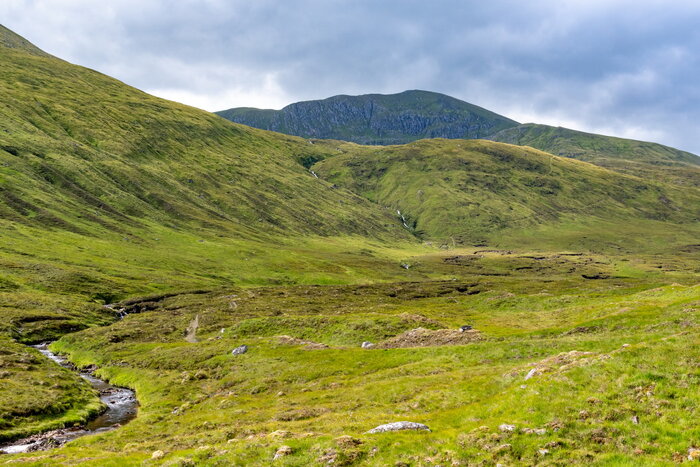 Looking north beyond Loch Monar and to the Glen Strathfarrar Munros to the right - I was glad to have clear tops but having some cloud added to the composition of the photos.

As an experienced walker, on reaching the lip of the corrie, I looked at the ridge I would later be descending. I identified a smoother green route of descent. I imagined what approaching from above would be like - down - levelling out - down a bit further until levelling out a bit before heading off down the slopes to the right.

​I walked across the isthmus between the two lochans and considered heading directly up to the eastern ridge of An Riabhachan but decided to do a rising contour to the bealach.

As I continued from the bealach, I could see a lone walker descending Sgùrr na Lapaich and I wondered if he was strong enough to catch me up and photograph me at the summit of An Riabhachan. As it was, He headed down to the An Garbh-choire. Compared to my previous outing, I felt that I was going much better. Perhaps I was a bit more hill fit or no longer suffering the effects of the Pfizer–BioNTech COVID-19 vaccine, but I think the main thing was that it was mostly cloudy and much cooler with a good breeze. We all like sunny days but this was better walking weather. 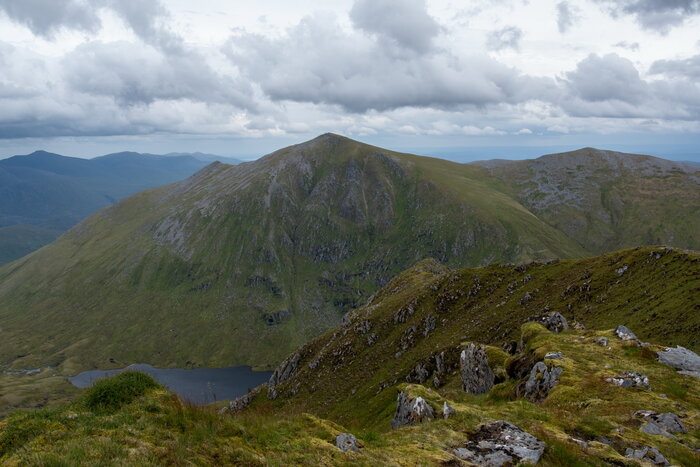 It was in fact quite blustery on the summit and I was a little concerned about the possibility of my tripod blowing over and damaging the camera, but I weighted it down with my backpack and everything was fine. However, once the photoshoot was over, I headed down to eat my lunch out of the wind. 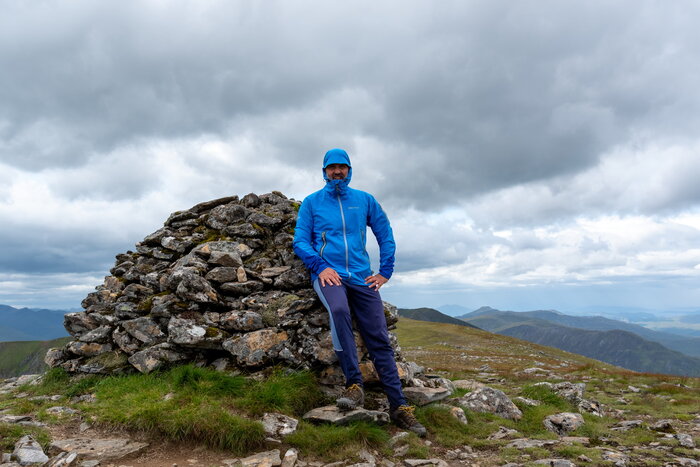 As an experienced hillwalker, there are two things going through your head when looking at a view like the one below. One is picking out the hills I have climbed and remembering all the wonderful memories (and at the same time wondering what happened to my youth). The second is identifying something that I have not climbed and considering the possible strategies of reaching the summit. For the latter, An Cruachan is a case in point. It may only be a Graham dwarfed by An Socach and An Riabhachan, but it is very remote. I had intended to climb it after An Socach but I did not want to be still covering difficult ground after dark and I wanted to get back for the Walkhighlands quiz and partying at Ratagan. So my plan is to combine iAn Cruachan with a return visit to Maol-Bhuidhe. It is something that I am very much looking forward to.

Looking across the Corrie to Sgùrr nan Clachan Geala, Sgùrr na Lapaich is to the left. Spot the herd of deer in the botton quarter of the photograph. 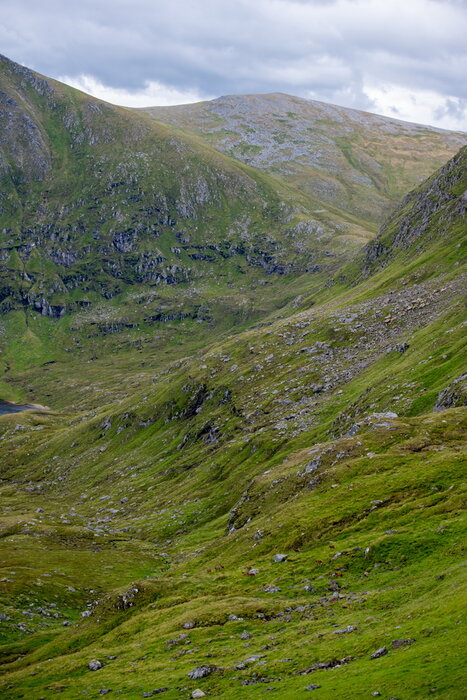 Looking back, my eyes were drawn to the patches of bright green moss and the white bits which is presumably a bit of remaining snow! 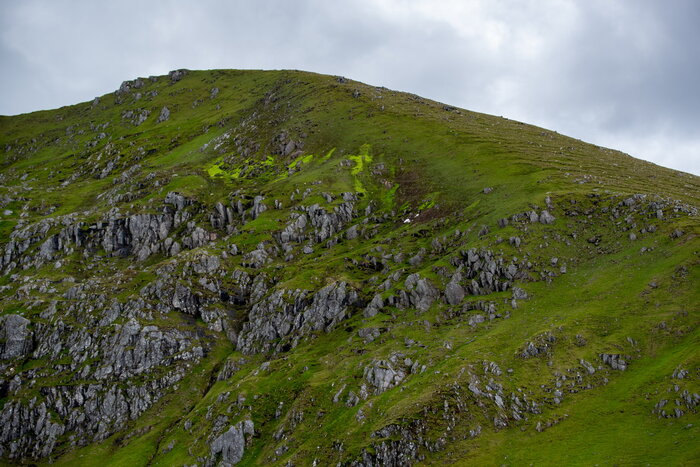 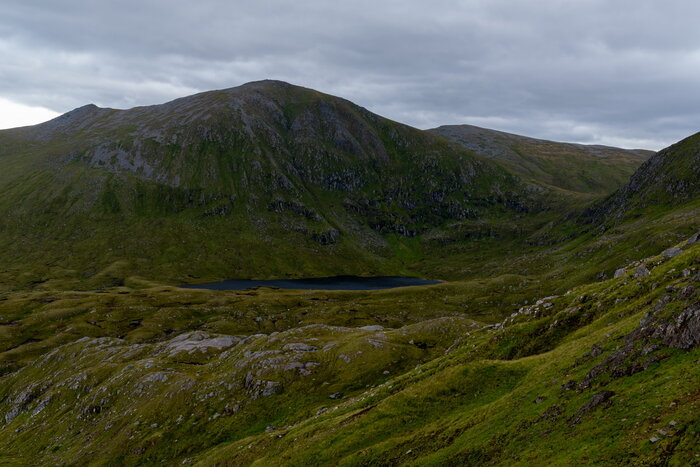 While looking at the views, remember to look at what lies down by your feet. Look at the number of insects on each flower. "​Parnassia palustris, the marsh grass of Parnassus, northern grass-of-Parnassus, or just grass-of-Parnassus, and bog star, is a flowering plant in the staff-vine family Celastraceae. It is the county flower of Cumberland in England, and appears on its flag." - Wikipedia. 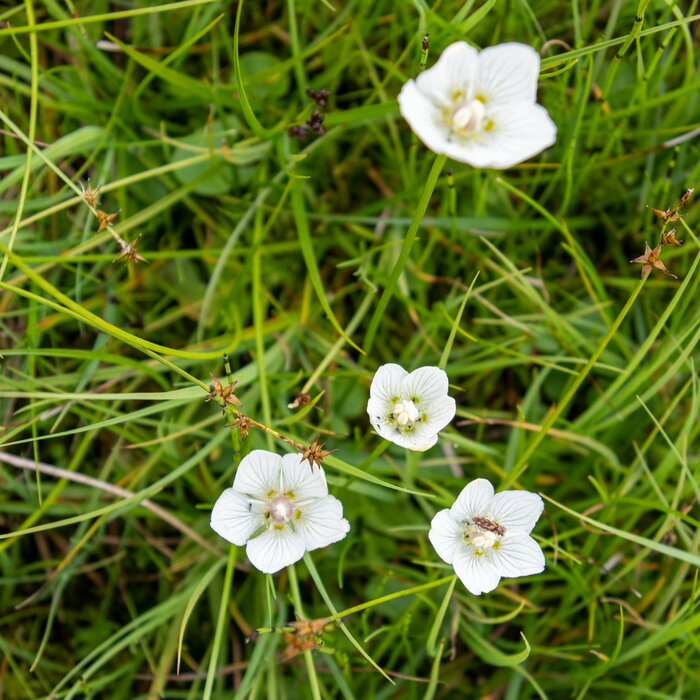 I was almost tempted to get out of the car on my outward journey to take some photos of the two dams and Beinn na Muice, which I had recently climbed with Thomas. However, I wanted to make a start on climbing An Riabhachan. I was off the hill fairly early and had plenty of time to take photographs on my return. I had about four hours before they locked the gate.

First, the smaller dam - not that it was holding back any water! The reservoir was very low. 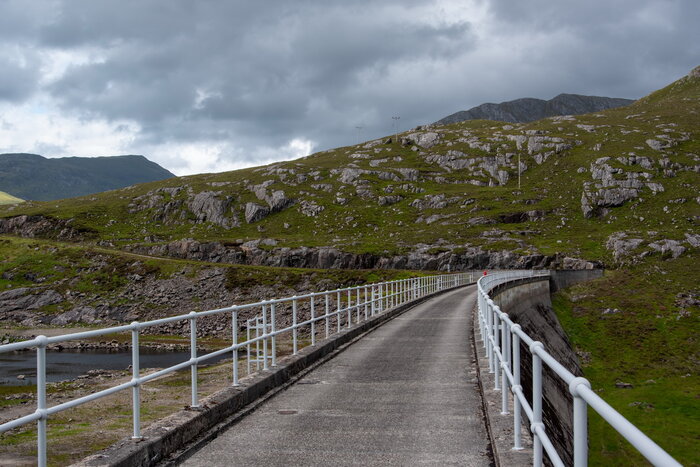 Then the second (in the return direction) dam and Beinn na Muice. 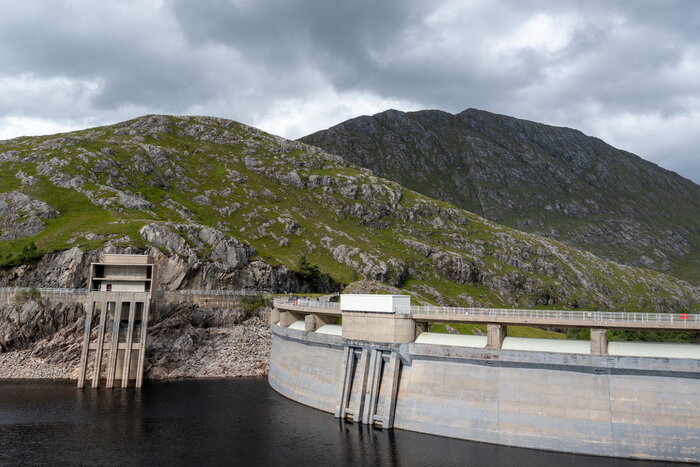 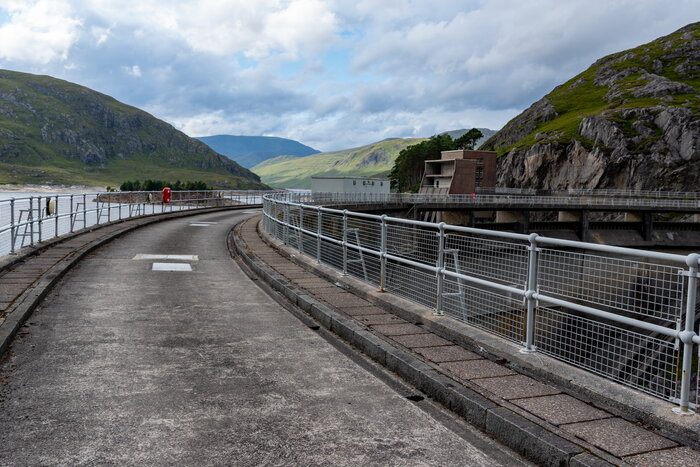 This was my last chance to get in a hill before leaving for Kazakhstan. The next day saw me driving down to Edinburgh for a PCR test - 5 hours to get there and 3 hours back!

All was well and I flew three days later.

I was really pleased with my choice of route. I just wish that my son Thomas had been able to join me, but he had to stay at home and look after his little brother. Maybe next year, all three of us can climb a hill together. I have a couple in mind!
Click to mark this as a great report. Register or Login free to be able to rate and comment on reports (as well as access 1:25000 mapping).

Yorjick's last Meall (of the year!)