our_route.gpx Open full screen  NB: Walkhighlands is not responsible for the accuracy of gpx files in users posts
The morning began with me dispensing a large quantity of alcohol.

Particularly, methanol, in the screen wash the car had used up. Then I hopped in and drove to Luichart Power Station. It was time to march on the route described by malky_c. I started the walk thinking I was just going to repeat the walk exactly as told - but over time, I decided I was making enough changes to warrant a proper report.

Speaking of marching, what's an ideal walk for March? I'd say something where the snow had melted but the bracken that would bury everything later hadn't grown yet. Would these two hills fit the criteria? Let us see! The start of the Sgurr Marcasaidh ridge beyond the Luichart dam - and immediately, the first change I made, as instead of the forested slope on the right of the cliff, I went up the empty slope on the left, staying on the track a couple minutes past the dam Well, 'empty'... it would be a Paleozoic-worthy bracken forest in its own right in a few months. But not in March! :D There were times I might've been following a path. Regardless, I crossed a fence and made it up the heathery/dead-brackeny hillside to the next fence, right before the steep bit began. The 'monument' of Sgurr Marcasaidh could be found further down the ridge; not keeping to the crest at all times, I bypassed it from a distance

On the actual steep part below the 506 m top, though, I was surprised to find an honest-to-goodness path leading up the heather. Maybe I'm wrong, but at the moment of writing this, Sgurr Marcasaidh 'boasts' 63 visitors; on Munros, they're counted in the thousands. Still, what I'd taken for an off-the-beaten-path Sub was very much on the beaten path - and I wasn't going to complain about that! The path disappeared as the slope was levelling off. But the ridge, which could be now seen in its entirety ending with Sgurr Marcasaidh itself, provided easy and relatively dry walking. With the sun and the lack of a proper wind, walking this ridge was absolutely lovely

Meaning I made it to the summit in no time at all. From the car, it took me 1.5 hours (compared to Naismith's 2) until I could feast my eyes on the N panorama (with the ridge I'd walked on the right)

As well as the S panorama, where the sun was making the snow-capped Munros and Corbetts blend into the background Since I was already on the ridge, I thought I might as well walk it until the end - so I passed by Loch a' Bhealaich (the smaller one, not the separate larger loch with the same name that's half a mile away)... ...on the way to Sgurrachd Ire, which provided even more lovely views, especially towards the W

The big loch ahead was the other end of Loch Luichart, whose dam I started the walk from. The one I was heading for, though, was the one on the left: Loch Bhad Ghaineamhaich.

This was actually a part of the reason why I extended the ridgewalk to Sgurrachd Ire. Malky_c's report cuts through the plantation above Loch a' Chairn Duibh, and though he mentions the trees being spread out, that report dates back to 2012. I wasn't sure how much the trees could have grown since then, plus I wasn't that thrilled about the idea of climbing over deer fences. Towards the loch it was, then. Braigh Lochan from close up. The descent was absolutely okay - though the plateauy bit, around where this picture was taken from, seemed like it had the potential to turn boggy Loch Bhad Ghaineamhaich with Carn na Cre beyond. In the end, I couldn't avoid crossing a deer fence right next to it - but made use of a wooden contraption to get to the other side easily And I didn't have to cross another one; the fence encircled the plantation but didn't come to meet the loch again So it was uphill again towards the second Sub of the day, Creag Loch nan Dearcag. Deceptively enough, it's on the very left of this picture, nearly hidden by Meall a' Choire Leith, while I'm walking up the slopes of Meall Bhad Ghaineamhaich

The Meall had tussocks and higher heather on the steeper parts, and there was the occasional boggy bit to avoid, but nothing too bad. On the shoulder about halfway through, the foliage shrank for a moment, before perking up again as the incline increased. For a strange reason - though possibly just because the angle of the ascent was similar - I was reminded quite heavily of the (longer) way up Leum Uilleim from the Corrour station. 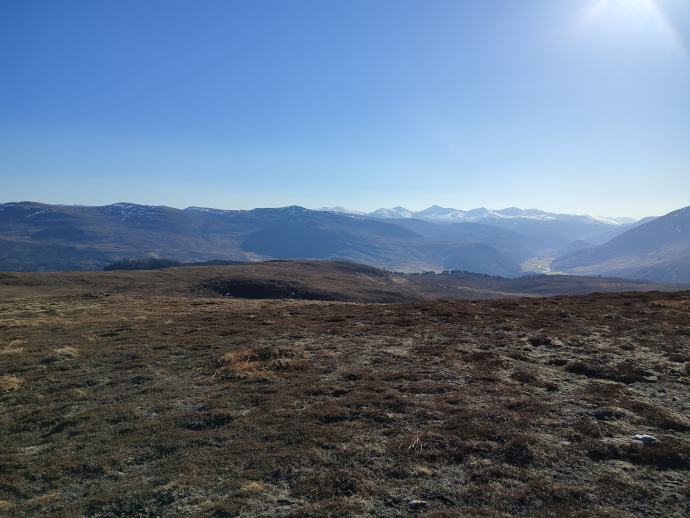 The views from the top were quite different, though - regardless of whether I was looking down Strathconon Ahead to the Sub where I was heading Or back to where I'd just been

This ridge was quite bumpy, and there was a time on Meall a' Choire Leith when I didn't feel like going up either bump around me so I walked in between them (and then had to stick close to the left one, which I might've been better off ascending), but I reached the summit of Creag Loch nan Dearcag. Exactly 2 hours since Sgurr Marcasaidh - so Naismith was correct on this section. It was getting a little windier now, but was warm enough that the wind was more refreshing than a hindrance. Back to Loch a' Bhealaich (yes, another one!) and the ridge I'd just walked. Like a ruffled, fluffy quilt - though the quilt is actually made out of scratchy heather And the ridge ahead, which would lead me to the car

Malky_c mentions he thought this ridge would be hard going but turned out okay. As far as I'm concerned, it was hard going. Tussocks, heather, bogs, the ridge had it all. Including an awkward sliding-down-on-the-bum-while-holding-onto-heather moment when the drop from Carn a' Mhearlaich was steeper than I'd expected. Could be a fun challenge, sure. But when I got into the mindset of 'I've bagged all I planned to' and developed a vision of dinner in my eyes propelling me forward, I didn't really have the patience for stuff like that. The flatter bit next to Loch na' Sgarbh was especially boggy. But I would leave the ridge after the next little top, so it was almost over, right? Looking down, I thought I'd just aim for the edge of the evergreens

Half a minute later, I was quickly backtracking from the idea, heading back up and continuing on the ridge where it descended more reasonably. The ridge then met a fence, which I followed down to the forest. It wasn't so bad while it was flattish, but then... Can you imagine what sort of nightmare this would be in the summer/autumn? Even when it wasn't currently an absolute fern rainforest, some parts were still quite steep and working out how to get down them took some effort. But slowly, step by step, with the road getting closer, I kept marching on

Honestly, the weather, the conditions, were perfect, irrespective of the actual place where I was walking. So if March would offer walks like this, then yes, please, keep Marching on. (And thinking that way, I really didn't expect it would take me until mid-May to write this one up.)

Anyway, with the song playing on repeat in my head (since by this time I'd decided on the name for this report), I found a kind of path once I entered the forest, and followed it mindlessly after it turned left. After all, left was where I wanted to go. Except the path didn't really feel like it wanted to connect to the road.

Well, I shouldn't have gone that far left. The gradient looked okay if I'd just continued straight on towards the road, but where I currently was, it was rocky and mossy and steep. Rejecting the very idea of backtracking, though, I climbed down some slippery rocks and more ferns and joined the road.

Reaching the car, I realised the last section - the descent from Creag Loch nan Dearcag - should've taken me 1.5 hours, but it took me a full 2. Was it fate? Was this walk meant to take 5.5 hours no matter what? Or did Naismith just hit upon the serendipity some Maths/Physics teachers show little regard for: using the wrong formula to arrive at the correct answer? Take your pick.

The Bhuird/Avon Side Road Corbetts