our_route.gpx Open full screen  NB: Walkhighlands is not responsible for the accuracy of gpx files in users posts
In a manner of speaking, any tree is a Christmas tree on Christmas, right?

I mainly just wanted to use the nice weather, though, irrespective of the date. Besides, I had no one to spend the holidays with, and where I'm from, the main day is the 24th anyway, so there was no use in waiting for the hills to get buried under snow as the forecast suggested might happen over the next few days.

The weather was meant to be the best in the NW, but with the short days, I didn't want to spend the whole day just in the car, so similarly to 3 weeks earlier, the choice fell on a couple of Subs in Argyll.

For Cruach na Seilcheig, I took the same route as described in weaselmaster's report, even down to the parking spot. A little boggy in places, but I actually found that the higher up I was, the easier the walking got, as the grass became shorter and it was easier to see what was hiding underneath.

Loch Losgainn Mor looking a bit tempestuous... which actually meant I had to cross Eas na Caillich a good bit below the dam as I wanted to avoid the shower from the waves crashing against it :D Loch a' Chlachain, Mull in the distance Another pull and I was on the summit. The summit area has two (tiny) cairns - one NE and one SW. I visited both to be safe (and to make better pictures in the respective directions

) but I'm pretty sure the SW cairn is the actual summit. The look N, Ben Cruachan et al. the major hills beyond the wrinkled land of hills, lochs and forests that is Argyll The look E, Loch and Daimh, and Carn Duchara prominent against the sky

The look S, as it was apparently a bit too windy to make panoramas...

Speaking of the wind, MWIS did warn against it, but I also checked 3 or 4 other websites, none of them displaying the same warning, so I went for it. Fair enough, I checked Oban every time as the search bars somehow refused to accept Cruach na Seilcheig, and even in the car, I only started to feel the wind after I'd turned onto the winding road in Kilmelford. But the wind wasn't too bad, pushed me up the last bit of Cruach na Seilcheig even; going for panoramas was just asking too much. (Not that I learnt from that...)

...well, initially, I wanted to make a shortcut and aim sort-of straight for the 295 m top, but the ravine holding the second burn was more substantial than I thought, so I had to back up a little. It also held a fence, but a low one that could be climbed over without issue. And yet another fence was encountered further along the ridge. Gleann Domhain with Barbreck River in the centre

The 'River' in its name should've been telling enough, but I'd still hoped crossing the Barbreck shouldn't be that much trouble; it was just a single thin blue line on the map after all. It seemed that the crossing wouldn't be so simple, though.

Making it down the last grassy lump and sending sheep running, I started to scout the river for a friendly-looking place. There were rocks aplenty embedded in the stream, but they still looked far too sparse and far too slippery. It would be humanly possible to just jump over the river - the world record for the long jump is 8.95 m after all - but not for me and not on this terrain. I ended up jumping perhaps slightly over a metre over the fast-flowing part of the river, landed on a few rocks that were barely below the water surface, and picked some 3 other groups of similar rocks before I made it to the other side.

My shoes held up pretty well, which was the important thing. There was another fence running alongside the river here that I needed to cross, this one quite high, but fortunately it made way for a lower one and headed uphill instead, so I crossed the lower fence and tried to look for a place suitable for heading uphill as well.

In summer, I'd imagine this would've been a choice between a dense forest on one side and denser bracken on the other. But in December, the bracken was brown and dead, so I headed up where the forest ended and shooed away some more sheep until the gradient abated a little. 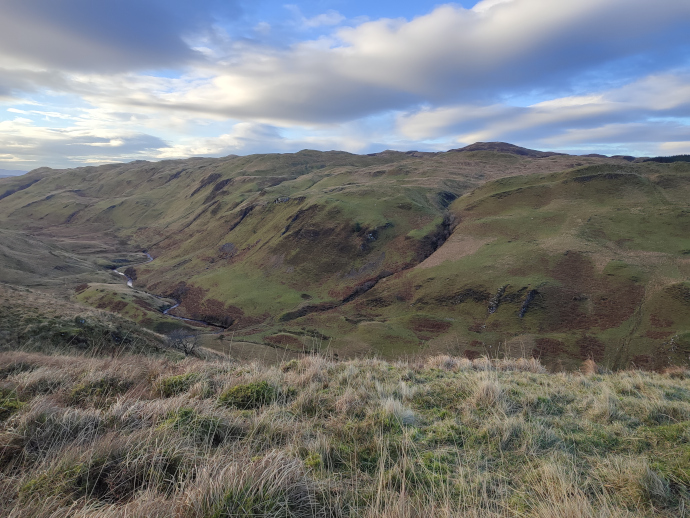 On the other side of the glen now; the fact that I was lower than the last, 264 m high top of Cruach na Seilcheig (whose main summit was visible too) was a little depressing A look ahead; I'd meet the high fence I mentioned earlier as it enclosed the forest seen ahead, the summit of Carn Duchara hiding somewhere beyond the trees The high fence seen from closer up where a lower one branched off of it. From a distance, I thought there was an overturned bicycle leaning against the fence; it was a bit of a relief to find out I was wrong... :D

Past the final pull to Lochan Mhic Chuaraig, the tall fence bent left as the map said, and there was a gate in the small bit leading to the lochan. The gate was tied shut on both ends, though, so I found it easier to simply squeeze between two of the planks before picking up a path / rough track on the other side. 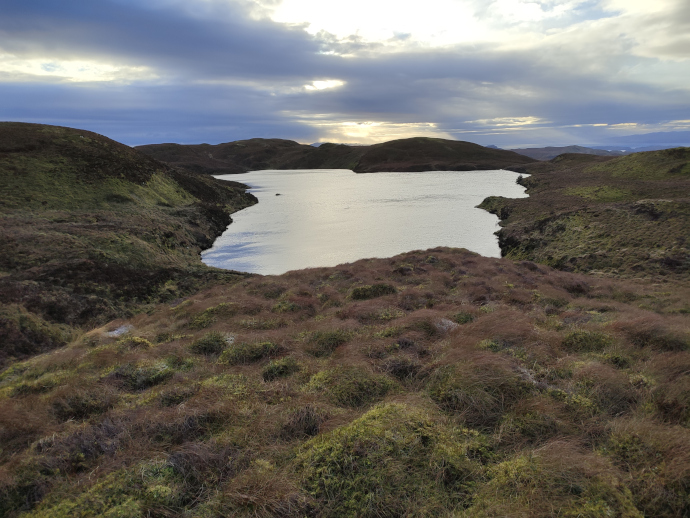 Lochan Mhic Chuaraig; the surface might look snowy against the sun like this, but I guarantee it was 100% liquid water Now, which one of you is Carn Duchara?

Ha, none of these! And none of the next bunch that popped up, either, I believe, despite one of the tops sporting a structure I could convince myself was the trig. The path left me at some point (or rather, I left it when it started heading S), so I just headed over the grass to the next lump, and then the one after. Some were even steep in a way I didn't really expect from a hill in this part of the country. The added variety just made the climb more fun, though. And an absolute mess of a panorama from the summit; heading from the SW, I'd been shielded from the wind until that point, but up there, even stepping into the quasi-wind shelter encircling the trig took some effort S/SW towards the clouds (and Jura?) NW: Mull on the horizon yet again, and Loch an Losgainn Mor shows how far the car was

Heading down towards the conifers - and out of the wind, which I was quite eager to do - I planned to follow the burn flowing down from the summit of Carn Duchara until I hit the firebreak that held a track, which I wanted to follow to the road. First, though... remember the high fence I was glad I didn't have to cross on two previous occasions? Well, now I did... But then I found this. My belly does have the worrisome tendency to expand, but I still haven't reached the point where slipping right through the fence gaps wasn't permissive :D The sight below reminded me a lot of the Cruach an Lochain / Creachan Dubh walk I did just 3 weeks earlier. Except this time, when it was more appropriate than ever, I wasn't walking to the beat of Christmas songs; back then, I couldn't get them out of my head the whole walk! (Well, Sabaton's 'Christmas Truce' to be exact, but who says festive songs can't be of the metal variety?

I was about to be more reminded than was appropriate, though. I'd checked Google Maps to see that the burn should flow down a firebreak. So I followed the burn and came across a firebreak on the left. The map said a track should branch off of the firebreak after a few metres and head downhill before turning left. I saw no track branching to the right, though; if anything, my own firebreak was starting to look like a track. Checking the map again, that firebreak would just end in the middle of nowhere - so, thinking I had the wrong one, I returned to the burn and descended some more. The firebreak I'd taken didn't have a continuation on the other side, either - another reason to believe I went down an incorrect one. Except then the ground flattened around me. Where the firebreak was, there should've still been some decent gradient...

I missed the firebreak, I came to realise.

Checking the map again (and sweatdropping a little), I then decided to keep following the burn. (Or river? At which point does it become the Barbreck?) The track I wanted to find would cross it at some point; I just hoped I wouldn't miss it.

Fortunately #1: I didn't miss it. It even crossed the water on a bridge instead of the ford I'd begun to fear as the river was increasing in width.

Fortunately #2: The trees kept their distance the whole time. The ground wasn't even that bad to walk on. Sure enough, there was tall grass, but I imagined I might be sinking deep into bog with every step. Didn't happen. The track. I'm not letting go of you again!

I can say that now, at least. As it turns out, I hadn't been that attentive when checking Google Maps, for there was one more firebreak on the left side of the burn than what the map shows: the one the track would eventually fall into. The firebreak I'd taken had looked like a track, because it actually was one. The one I'd aimed for. Coming back to the comparison to the Cowal walk, that experience had told me I was always slower in firebreaks than I thought. I never even considered that I might've missed the correct firebreak; I automatically assumed I hadn't got to it yet, and returned to search lower down.

Note to self: if counting on firebreaks, have the Google Maps image available alongside the OS map!

Anyway, so I found the track, followed it to the road, and followed the road to the car. I even had the road to myself, not having to move aside for any other car - a welcome fact, most certainly, although given how empty even the bigger roads like the A85 were, not entirely surprising. Sure enough, if you have the chance, Christmas Day should be spent with family; leave exploring obscure hills in the wilderness to loners like me!

The Bhuird/Avon Side Road Corbetts

Sailing More Without Sailing Back

Crawling Out from the Dungeon