Who Cares About Kagami's Flow State?

The Law of Diminishing Ascents


Once Upon a Playground Rainich


our_route.gpx Open full screen  NB: Walkhighlands is not responsible for the accuracy of gpx files in users posts
An interesting note to start with: exactly a year had passed since the first (and only) time I'd driven up the A832. (Or, to be precise, it was the equivalent Saturday, so 364 days.) Not the reason why I picked this group of hills, though, only a coincidence I found funny once I took note of it.

I thought I'd just be retracing malky_c's steps, but in the end, I picked a slightly different route. That seems to be a trend nowadays. The Marilyns bagged didn't change, though. L to R, it would still be Groban, Beinn Bheag, (skipping over the Fisherfield Munros) and Creag Rainich. Which is the hill in the background, slightly more prominent and towering over Meall Dubh. Furthest R and closest is then Meall an t-Sithe 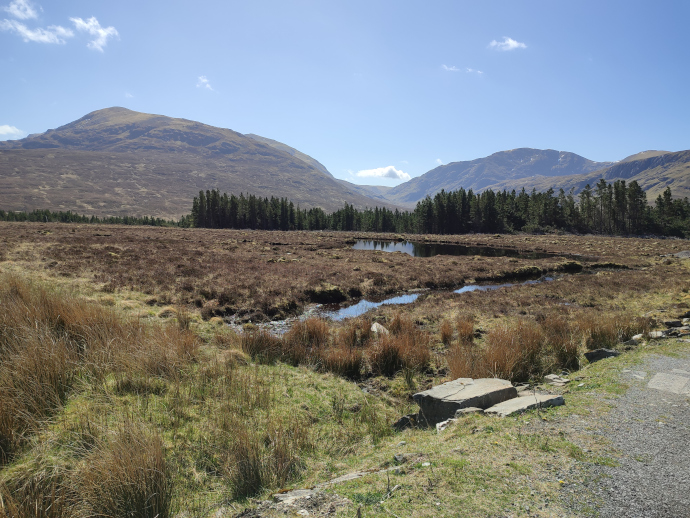 The Fannichs S of the initial track

Speaking of the track, I ended up parking across the road from it, as the layby was completely full and there was a bit of space on the other side. Funnily enough, I wouldn't meet any of those people the entire day, and the layby would be down to the last 2 cars when I'd get back. It does make sense that there wouldn't be much traffic on two Grahams and a Corbett that are surrounded by Munros, though. 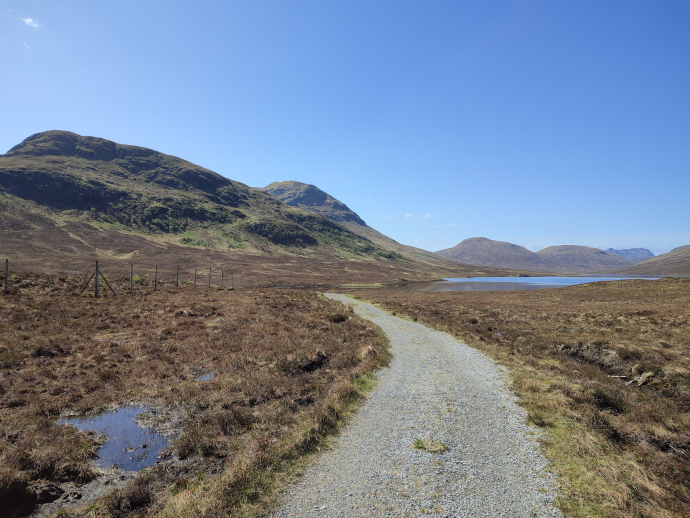 The track led to Loch a' Bhraoin, then followed its shore

The track was fine all the way to Lochivraon, though a few of the many burn crossings had to be bypassed on the side if I wanted to get across with dry feet. I stuck to the track for a bit after I'd passed the bothy, then left it once it started to lead me away from Groban's slopes instead of towards them

Crossing Abhainn Loch a'Bhraoin wouldn't have been much of an issue right there, I could see a line of sort-of stepping stones, but they looked a bit slippery; nothing dangerous, but it wasn't worth the risk of getting the allt into my shoes. After a bit of searching, I found a place where I could jump from the higher bank across the entire width of the allt. Then, it was time to tackle Groban.

And the lower slopes were boggy. The map wouldn't really show that even if I tried to depict it, but a lot of zig-zagging had to be done in order to stay on drier land. Eventually, though, the surface got better as it got steeper. The last section even felt properly mountainous with how steep and covered in the rough, short yellow grasses it was. Made it to the summit. A' Chailleach from a different angle (and the Beinn Dearg group in the distance) from Groban S/W towards Slioch and Torridon. The table in the middle is Beinn a' Mhuinidh, right? 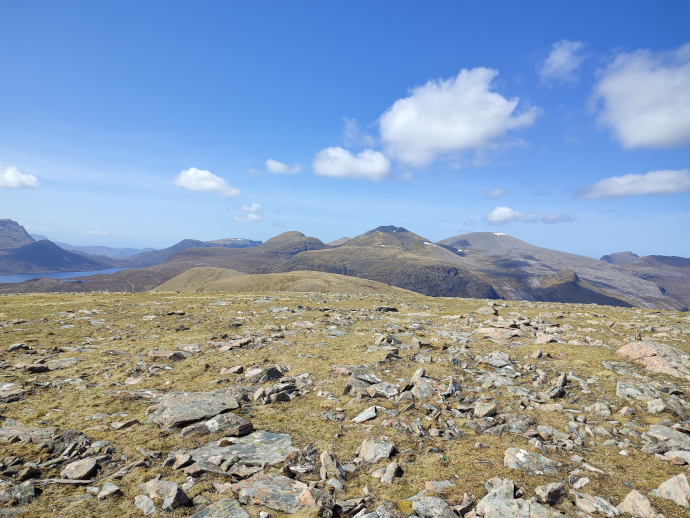 Over Beinn Bheag towards Fisherfield

Next: descending from Groban into Bealach Gorm. Looking down before I started the descent, I thought, 'This is going to be steep.' But once I started heading down, it was pretty okay. As a cherry on top, the deer herd in the bealach that appeared to be about to flee exactly the way I was going actually looked at me for a while, pondered over their options, and then decided to go N instead, along Allt a'Bhealaich Ghuirm. Smart guys! Creag Rainich (and An Teallach in the distance) from the bealach. Not yet, though; Beinn Bheag had to be ascended first

The way up Beinn Bheag wasn't unlike the way down Groban (which is sort of unsurprising). Also in terms of the time required; thanks to the 80-metre difference between the two Grahams, the descent and the subsequent ascent took about 20 minutes each. I made it to the summit, took S/E pictures, then strolled over to the NW minor top and took N/W pictures. Such as this one down Loch a' Bhraoin

Perhaps the latter picture could've looked even better if I made my way to the 615 m top ahead. Or perhaps the view to Loch an Nid would've been obscured by then. Whichever the case, I simply headed for Creag Rainich. A few minutes later, I came across steeper ground and remembered I wanted to descend Beinn Bheag in the NE direction. Some rough ground and tussocks, but the slope wasn't that boggy. The bealach was quite okay, too.

On a similar note, the Creag Rainich ascent wasn't any steeper than the initial slopes of Groban. No paths there, either. But also, no bogs. As the driest of the three, Creag Rainich's name absolutely can't be simplified as Creag Rainy. (A reminder to my past self who'd already picked the title of the report.) Groban should be taking notes! Meanwhile, I could feast my eyes on the sight of Mullach Coire Mhic Fhearchair and Sgurr Ban across the glen

Thus, ascending towards the N was fun. After the sharp turn E, though, the - suddenly much rockier - slopes seemed endless. At least to me, who'd convinced myself that the summit was right by the turn. In the end, it wasn't more than 15 minutes, but it was 15 unexpected minutes... 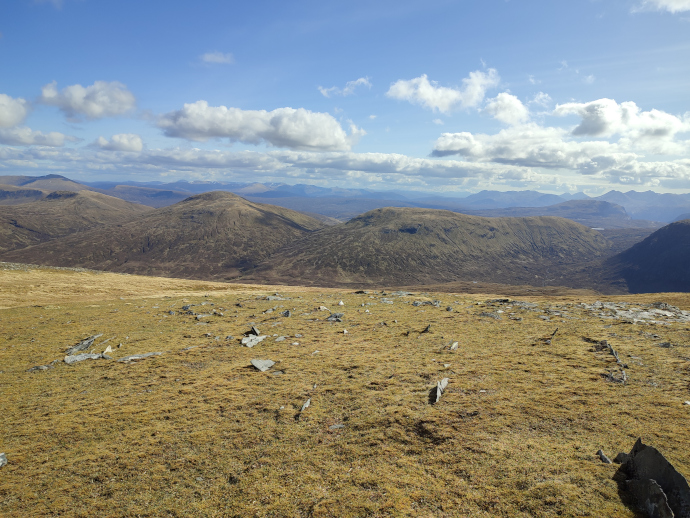 So Creag Rainich had looked decently pointy in the picture I took at the beginning, yeah? Turns out it still is one of the summits that doesn't really allow panoramas to be taken. So here's Groban and Beinn Bheag An Teallach (and Beinn a' Chlaidheimh) 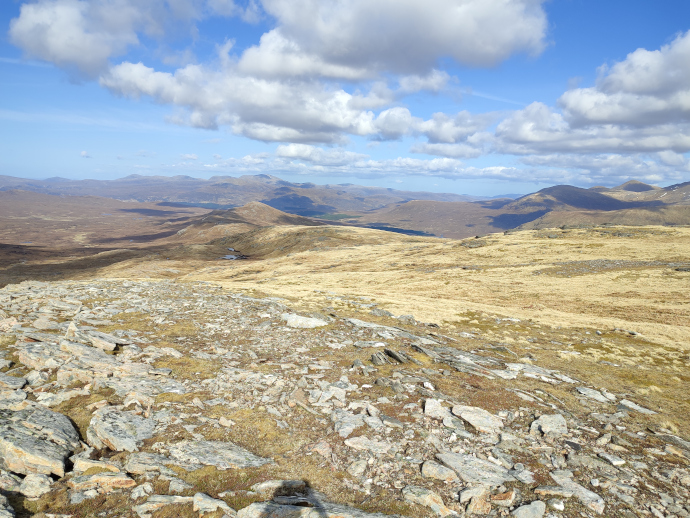 The last picture was actually taken from Meall Dubh, not Creag Rainich. The short stretch between the two was way boggier than the entire ascent of Creag Rainich. Then, I decided to stay on the ridge until Meall an t-Sithe. After all, I thought, I already knew what the track below was like, and this ridge didn't give me the feeling of a much explored place.

Initially, though, the ridge seemed to follow the trend of bogginess. At least while I stayed a little NW of the crest. On the actual crest, it was a little better, but still had its boggy places. Meall an t-Sithe from closer up And a look across the loch to the Fannichs

This final ascent - or, I guess, the entire section since the Bristeadh a' Mhill Dhuibh col - changed the character of the ridge a little. The bog wasn't completely gone, but the ridge was rockier and more fun to walk overall.

Also, when I mentioned the ridge didn't seem like a crowded place... By humans, at least. Because there were dozens of mammals on the ridge; the last picture catches at least a couple. Meall an t-Sithe must be a... dear place to all those deer... And once again, the Fannichs above the entire length of Loch a' Bhraoin

From there, I could've simply headed straight for the car. I didn't feel like testing the bogginess of the ground I'd have to cross, though. Since I'd checked what the hill looked like from the loch side, I descended back to it. A bit rough and tussocky, but not an inherently tricky or difficult descent - and I was down on the track that led back to the layby. On the way back, I was surprised to see one of the deer came down to say goodbye in person. Or... should I say in deer, in this case?