The Ever Changing Creag Meagaidh Circuit

As myself and Ewa travelled to our Munros of the day, the Creag Meagaidh Circuit, the sun was shining and sky was blue which filled us with excitement. The weather forecast had said that visability would be excellent but very poor in snow showers but at this point we were hopeful we could 'beat' the forecast and the conditions would be of the "greater than 90% cloud free summits" predicted. As we drove along Loch Laggan we got some sneaky peeks of 'The Window' which distracted Ewa from her driving

so we stopped to soak in the views and get some glimpses of what we would be climbing. As we started the walk the weather was still looking good and our excitement was maintained. A few other walkers and runners were setting off around the same time as well who appeared to be equally optimistic about the day's prospects. 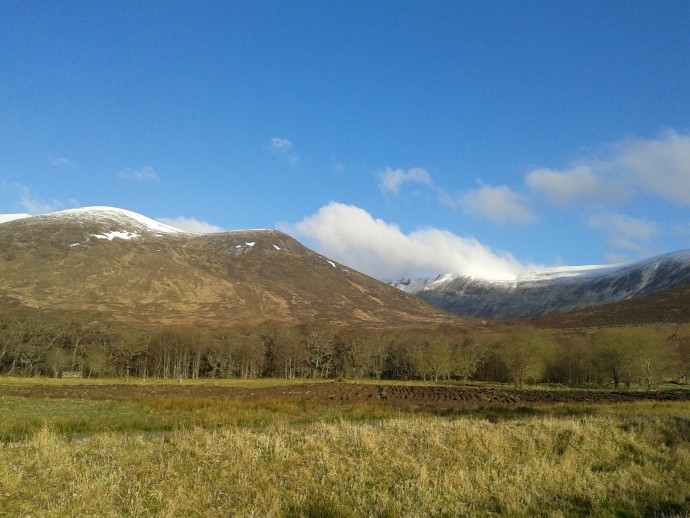 During the climb of Carn Liath we got another glimpse of 'The Window' but soon after, as forecast, the weather began to close in. By the time we got the summit of Carn Liath we were up above the snow line (much more than we expected), completely in the clouds and the weather was nasty. Visability was nil and we were being battered by snow and hail so at this point we had to decide if we should carry on in the hope the weather would improve again or turn back. We were concerned that if we continued, and the bad weather continued, we would miss some amazing views and this was a circuit we had eyed up for a wee while. One walker who was already at the summit decided to turn back while another pair shared our thoughts about choosing to head to the second summit and would re-evaluate from there.

And as luck would have it, shortly after leaving the summit the clouds cleared and the views were as amazing as hoped. The walker who had decided to head back down also changed his mind and was heading along the ridge. Lucky for him that the weather had changed so quickly before he got so far down that coming back up didn't make sense. 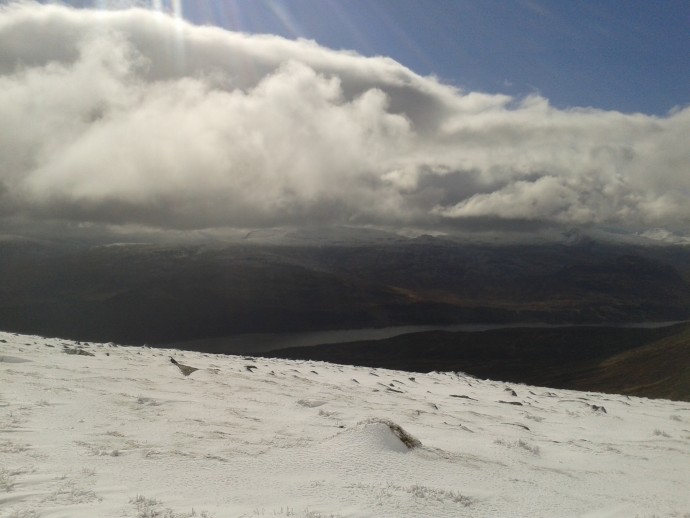 With our exitement restored we continued along to the second summit of the day. The snow on the ground however, was determined to hamper our progress as we were forced to wade through it. Shortly before the summit we were caught in white out conditions. The picture doesn't quite show it in its full form as the winds had picked up significantly and I only had my strapless phone for a camera. This was the first time we experienced proper white out conditions where we could not tell the ground from the sky or make out the edge of the ridge. It was quite a scary experience but thankfuly it didn't last too long and there were the ever faithful fence posts to help guide us. 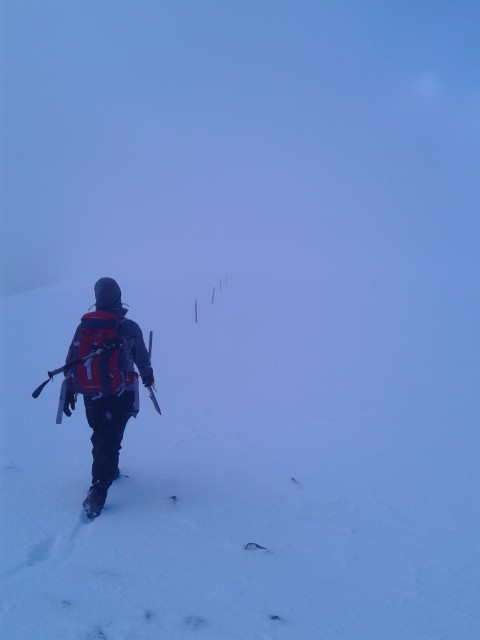 The summit of Stob Poite Coire Ardair was a world away from Carn Liath and we were treated to some spectacular views. 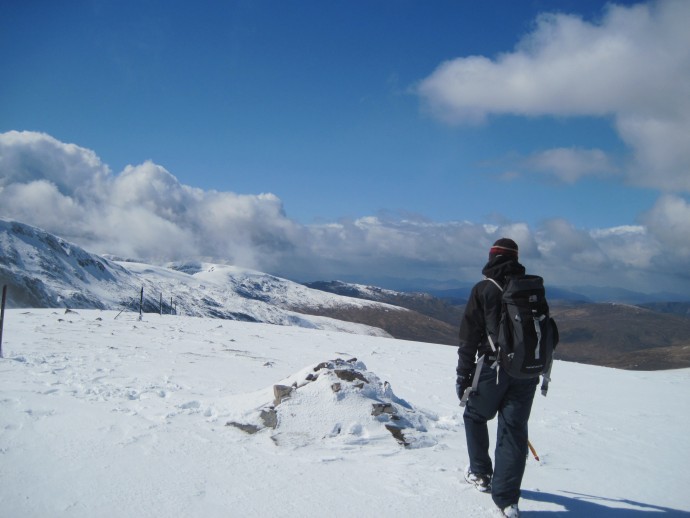 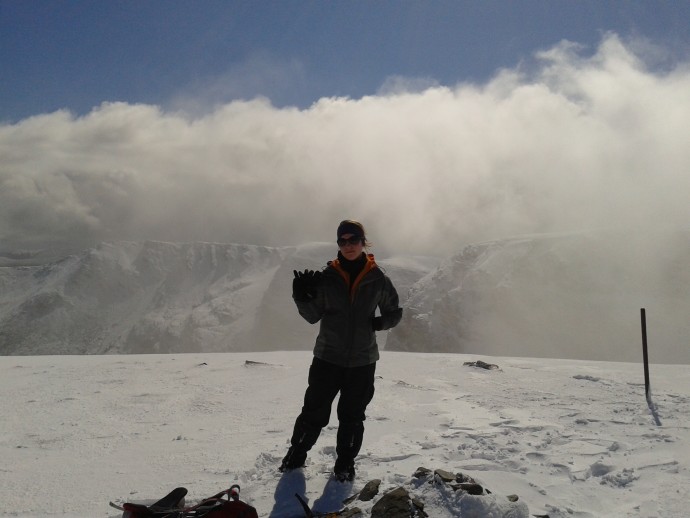 We then headed down to 'The Window' where we decided to continue on to the third. We slowly made our way up and along the summit ridge desperately trying to save energy and use the footsteps of a group about half an hour in front of us but the wind was filling in the footsteps almost as quickly as they were made. We finally got to the summit where the clouds had closed in once again. However we decided to hang around for as long as we could bear with the cold in the hope that the weather would do it's usual U-turn and it did, some more terrific views were had. 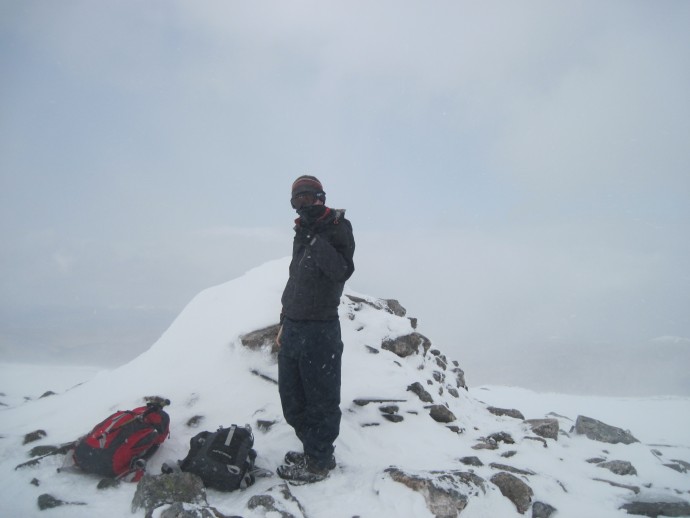 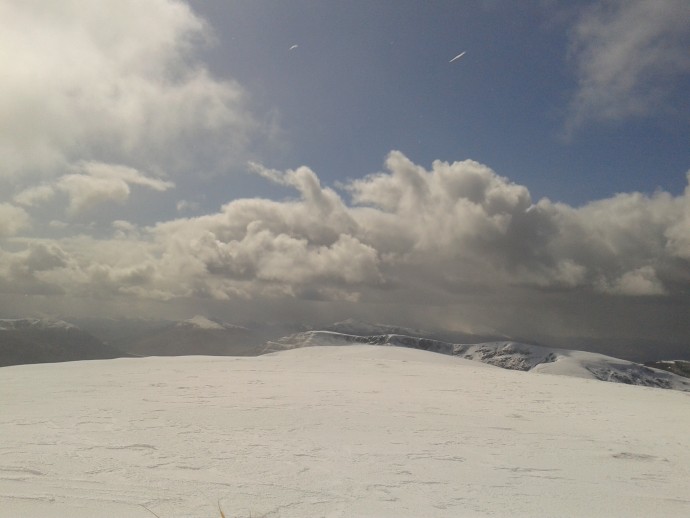 After lapping up as many views as we could we began the walk/wade back where we met another couple of walkers who shared our feelings on the slog of the walk in these conditions. 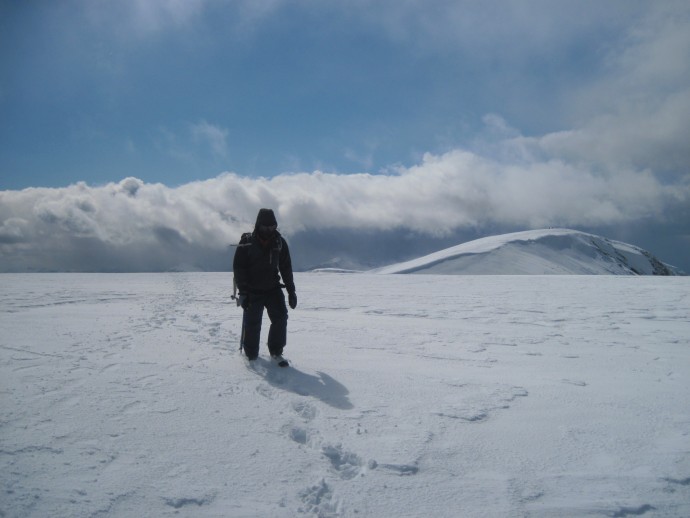 While our walk back along the ridge was slowed down by the white stuff our walk along the path, once off the hillside, was slowed down by constantly looking back at the view of Creag Meagaidh's cliffs. Right to the end of the day the weather was ever changing as we were treated to a final snow shower in a silent glen with zero wind before reaching the carpark completely shattered in sunny and relatively warm conditions where we felt like we had made the whole day up! A great day's walking!

When the forecast looks dubious head for the Grahams!