I have to confess that to date all my hiking and running has pretty much been in the hills. After a pretty grotty February, the promise of a couple of days decent weather had my wife and myself looking for a nice 2 day trek. We landed on the Berwickshire Coastal Path. If you want a nice alternative to the hills, this trail may be exactly what you are looking for. Its well marked, quiet, passes beautiful bays, dramatic cliffs and quaint villages. The sound of the birds and the ocean are a constant companion as you wind your way down from Cockburnspath to Berwick. There are some short steep ascents and descents, but for the most part it is easy walking on grassy paths, country roads and gravel tracks. Nothing technical, so you can look up, enjoy the surroundings and clear your mind.

Day 1 - 26km. Cockburnspath to Linkim Shore.
The quiet village of Cockburnspath had a lovely central square, with ample places to park and leave the car. The first section followed the Southern Uplands Way, under the A1 and out to the coast with great views over Cove and Pease Bay. 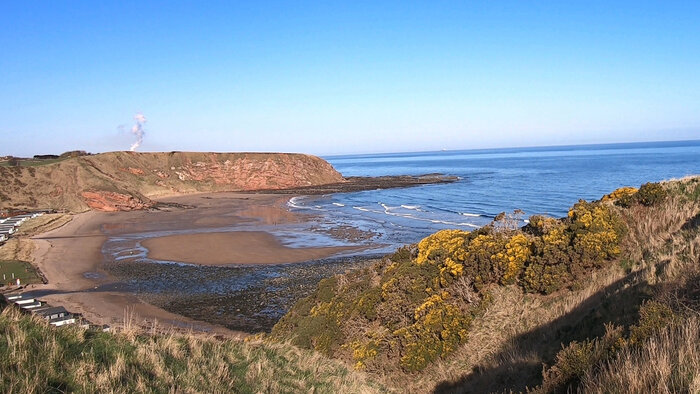 After some easy road walking on a quiet country road the trail climbed steadily uphill and away from the coast. There then followed a great section to Dowlaw, high up and with great views down the coast. The trail is just north of a minor road and was a delight to walk on, through grass and bracken. 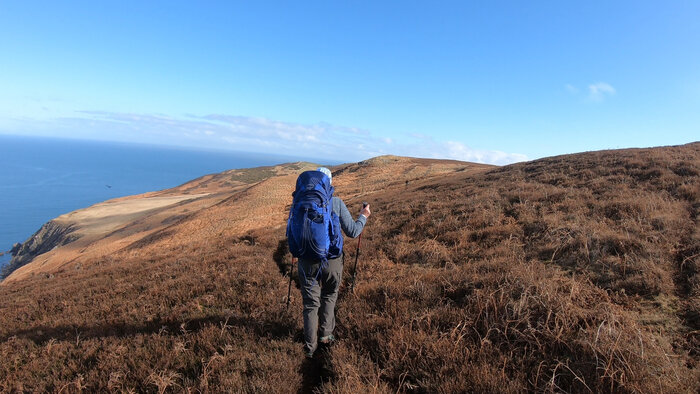 We passed through Dowlaw and lunched at a pretty stone bridge in the sunshine. The next section to St Abbs Head then just got better and better. As you move back towards the coast the cliffs and coves get ever more impressive. After one steep descent and ascent a small hilltop gave a great view down to a waterfall. 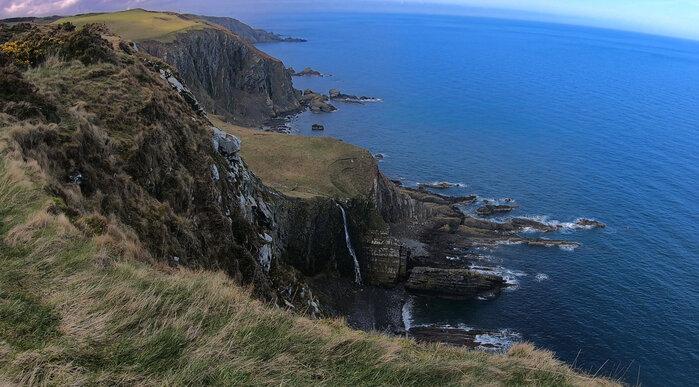 From here was the highlight of the day, the walk around St Abbs Head. It was quiet, the sun was out and the views around the coast were beautiful. If I could have camped here I would, just to enjoy the serenity. 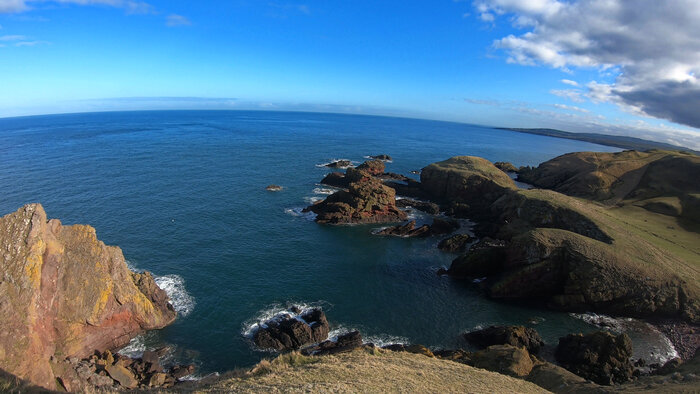 A short walk took us through the quaint village of St Abbs, past the picturesque Coldingham Sands and on to Linkim Shore where we had planned to camp. There were clearly two camping 'spots' on this beach which is in a great setting. Unfortunately, previous visitors had not adhered to 'Leave no Trace'. Lots of stone arranging and two ugly 'firepits' marred what is a lovely wild camping space. We pitched up, ate and quickly retreated to sleeping bags. It was a cold night. 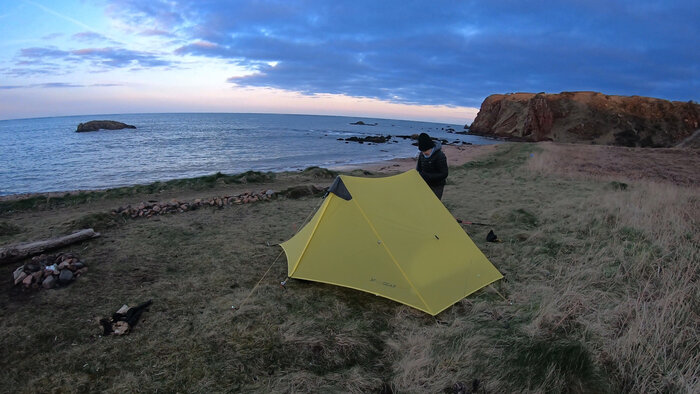 Day 2 - 22km. Linkim Shore to Berwick.
Waking to the sound of the birds and waves on the shore was joyous. Getting out of the sleeping bags wasn't. We watched the sunrise, had a quick breakfast then got on our way. 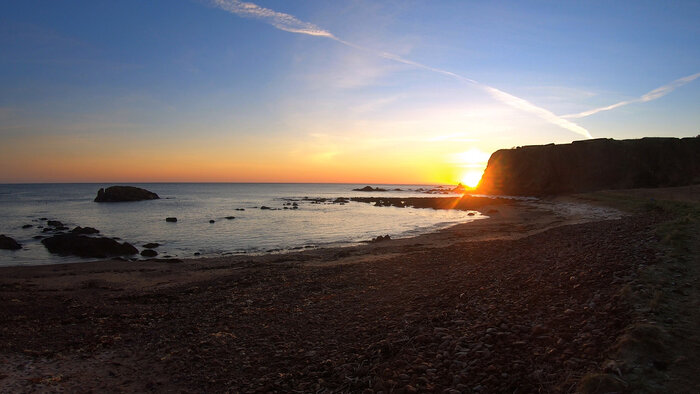 It was a short brisk walk to Eyemouth, enough to get the circulation going and our bodies warm. Eyemouth is a small town with a nice harbour and river. From there we hugged the coast next to impressive cliffs. 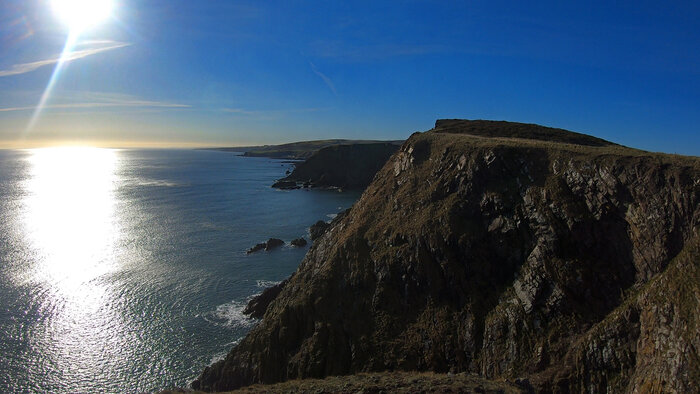 The path dropped down to Burnmouth and its small sheltered harbour with a lovely commemorative statue to a past fishing disaster. Then after a short steep climb it was a high level promenade all along the coast, alongside the railway line and besides two caravan parks, but always with the sound of the sea close by. 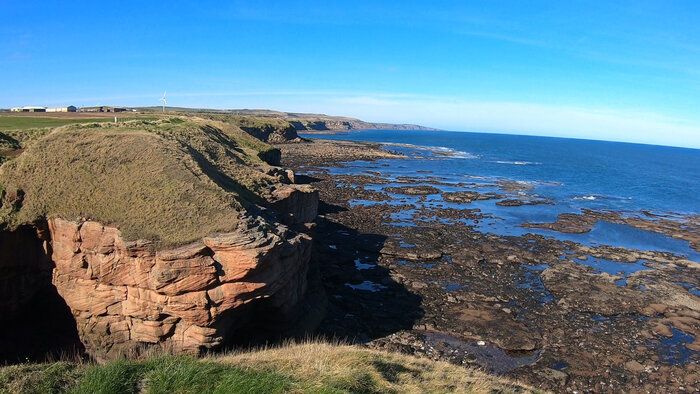 Berwick soon approached and we followed it in alongside the walls and some lovely old buildings until the estuary was reached at journeys end. There was only one thing left to do. Tea and cake! 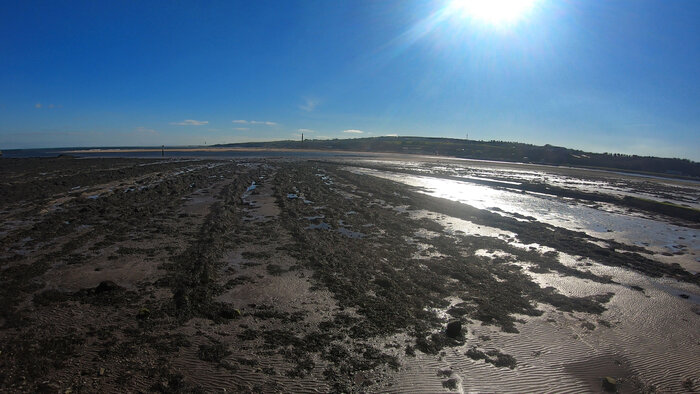 We started day 1 at 9am and finished slightly after 4pm which included a stop for lunch. The second half of the day from Dowlaw is a bit harder as there is more ascent and descent.
We left camp on Day 2 at 8am and finished by 1pm. We didn't hang around as although it was sunny there was a very cold wind. Oh and my wife wanted cake.

I did a video of this trip which shows more of the scenery and the type of trails encountered.
https://www.youtube.com/watch?v=iLBkPVAs4M8
Click to mark this as a great report. Register or Login free to be able to rate and comment on reports (as well as access 1:25000 mapping).


Scottish National Trail - Is there a better walk in the UK ?