This walk covered the three westerly Glen Affric Munros on the first day, a stay at Camban bothy and then Beinn Fhada and A'Ghlas Bheinn on the second day. The section covered on both days along Glen Elchaig was done on bikes. Here's how we got on...

We drove up to Kintail on the Friday night, parked at Killilan and camped close to the car. Waking early we got our first view in daylight of the fantastic Kintail scenery. After breakfast we got our stuff together and headed up the glen around 6.30am. The private road was tarmac for about 4km then a good track the rest of the way in. We left the bikes at the junction with the Glomach Falls path - our return route the next day. The amazing surroundings where we woke up Adam and I ready to set off up the glen

After leaving the bikes we continued up towards Iron Lodge alongside Loch na Leitreach. We saw loads of deer in the glen - some of the stags were occasionally clashing as part of their rutting season. After the lodge we headed west along the slightly rougher track that zigzagged up out of the glen. As we progressed Loch Mullardoch came into view along with the ridge we were to ascend. With our heavy packs and the rising temperature, the climb up onto the ridge was hard going, and only gave us half the ascent to the summit. The haze slowly burned off and as we progressed along the ridge we started getting glimpses of all the surrounding mountain ranges - Ben Nevis, Cuillin, Torridon, Knoydart and of course Glen Shiel. 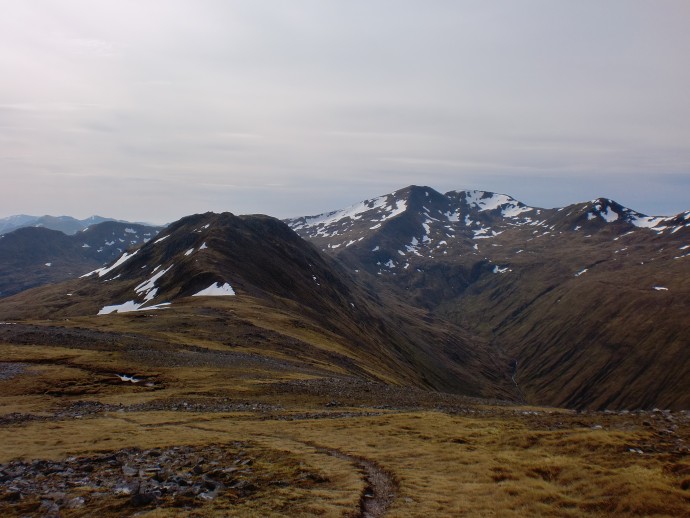 View of The Cuillin After reaching the summit of Sgurr nan Ceathreamhnan we headed down the west ridge towards An Socach. The Ascent of the last hill of the day was not very difficult but the summit was a welcome sight. From here the descent down to Alltbeithe hostel and across to the Camban bothy on the North side of Beinn Fhada was easy going apart from the extremely boggy ground in the middle of the glen (despite the long period of dry weather). Last descent of the day, down into the glen

Camban Bothy came into view as we headed along the path. As we arrived we were surprised to find we had the place to ourselves, considering the hostel was shut for the winter. The bothy was in great condition and of a very high standard. There are two rooms, each with raised wooden sleeping platforms and a fireplace. One has a proper kitchen area and the other, our preferred choice, has a table and bench. The front of the bothy in the morning

We packed up after breakfast and headed up the hill straight behind the bothy shortly after sunrise. It was satisfying reaching the top of the ridge having covered most of the ascent for the day before 9am. Looking back across Loch Affric was amazing - the pink-ish sky reflecting in the still water. The calm in the glen did not extend to higher altitude. The views, however, made up for the wind and only improved as we reached the summit. From the summit we had opted to descend via the NW ridge as opposed to the path that drops down into the north coire, allowing us to get in a bit of scrambling. The first section looks like the most serious part from the summit but doesn't really require scrambling, although in the ferocious wind and carrying heavy packs we had to be really careful on the narrow ridge.

The Five Sisters of Kintail from Beinn Fhada Summit of Beinn Fhada from the SE ridge

Looking along the NW ridge of Beinn Fhada

After the bealach is reached the 'bad step' was facing us. Our intent was to descend from here so we took our packs off to do this small section. This part is graded as a 1 for the centre left line up the recess, but we were feeling adventurous and headed up off to the right which had some tricky moves in places. I would say this part was a grade 2/3 depending on the route taken. Afterwards we simply descended down the grade 1 part. The 'Bad Step' from the bealach (looking NW)

The route from the ridge took us down to pick up the path from the north coire of Beinn Fhada which then heads round to Bealach an Sgairne. Although unmarked, there is a decent path up to A'Ghlas Bheinn from here - after our long weekend this last ascent proved to be quite tough going, the summit was a welcome sight. From the summit we headed north, initially on a sketchy path which disappeared after the steep section. We continued picking up the path that heads down past the Falls of Glomach. The falls are well worth the detour or even dedicated wall to see them. From the top of the falls there was a fair bit of descent, but we quickly reached the bikes and we got back to the car at 6pm. Loch na Leitreach as we reach the glen