Am Faochagach – The Enjoyable Route!

Am Faochagach – The Enjoyable Route!


our_route.gpx Open full screen  NB: Walkhighlands is not responsible for the accuracy of gpx files in users posts
When you research Am Faochagach an overwhelming percentage of the reviews would put it in the ‘boring Munro’ category; undistinguished, boggy & difficult river crossing. I hope to put a more positive spin on it, and justification for why the longer route from Loch Glascarnoch dam is a better option (for some).

It was the 17th April 2021, i.e. the day after “travel within Scotland for outdoor socialising, recreation and exercise will be allowed”

. To stay within the rules meant staying anywhere was out of the window (I wasn’t certain on the camping restrictions, so played it safe). As soon as the announcement was made, accompanied by favourable weekend weather forecast, I began looking for a suitable Munro that would be within my hill fitness levels after seven months out, and driveable within a day from Aberdeen.

Loch Glascarnoch was (only) a three-hour drive from my house so that made Am Faochagach one of the closest Munros I hadn’t already completed. Reading up various reports from Am Faochagach didn’t really sell the hill well, but after plotting it out I decided the longer route would still tick all my boxes.

To give me the greatest chance of success I set off from Aberdeen at 5am and I had arrived at the car park next to Loch Glascarnoch dam just after 8am. The roads were remarkably quiet and driving along I had the much-missed nervous excitement for the day ahead. I had envisaged pandemonium on the roads and even had a plan B if I was unable to get parked at the dam.

No difficulties getting parked… 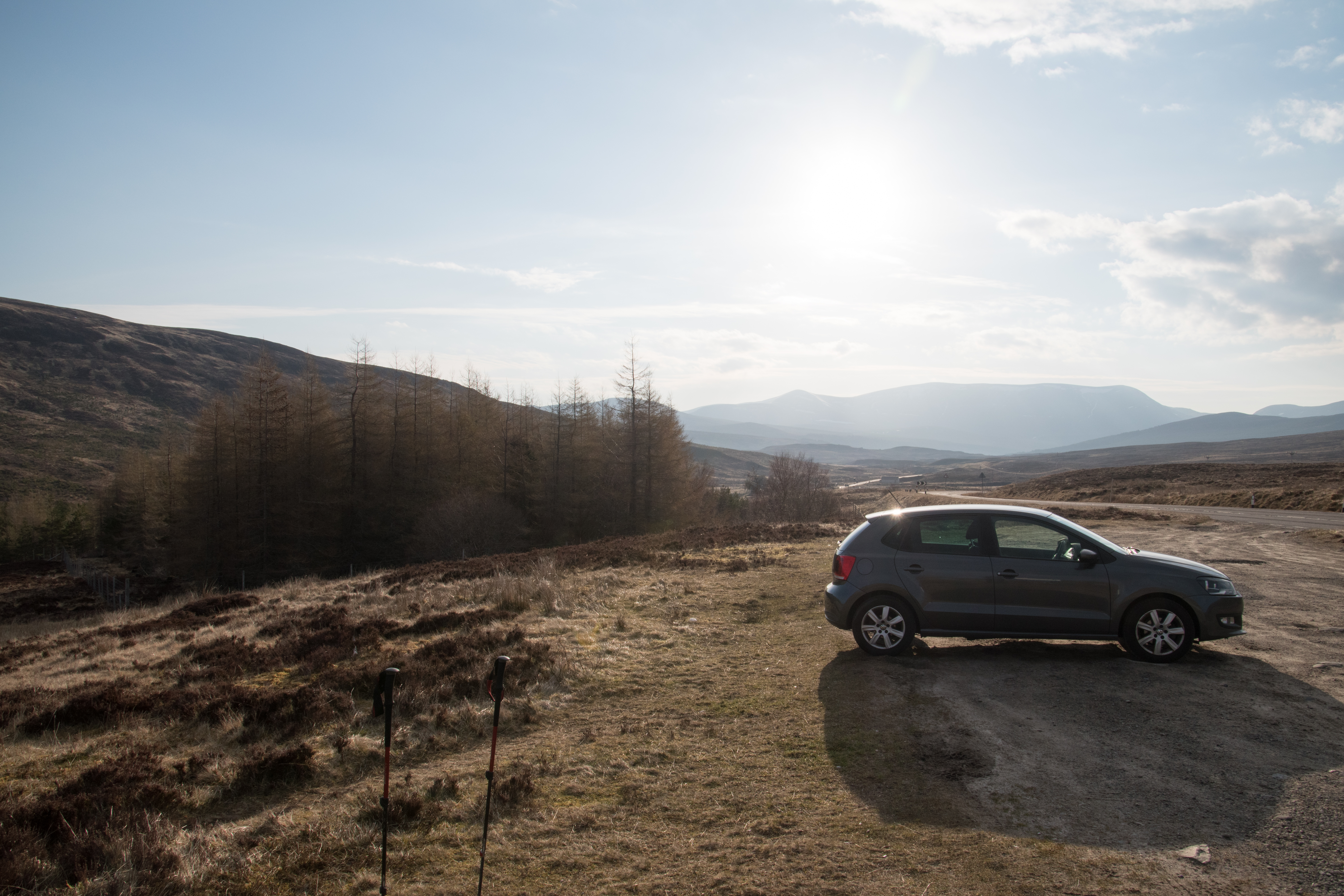 In fact, as it turned out I was the only parked car and within the 10-15 minutes it took me to eat my breakfast and get dressed and ready to go, I only seen 1 or 2 other cars go past.

We had a fresh spell of snow at the start of April and driving up from Inverness a lot of the hills looked sufficiently covered. Although I couldn’t see the summit of Am Faochagach from the car I opted to take the full winter kit, which meant heavier, less Land Rover track friendly winter boots.

When I set off there was hardly a breath of wind and Loch Glascarnoch was like a giant mirror. 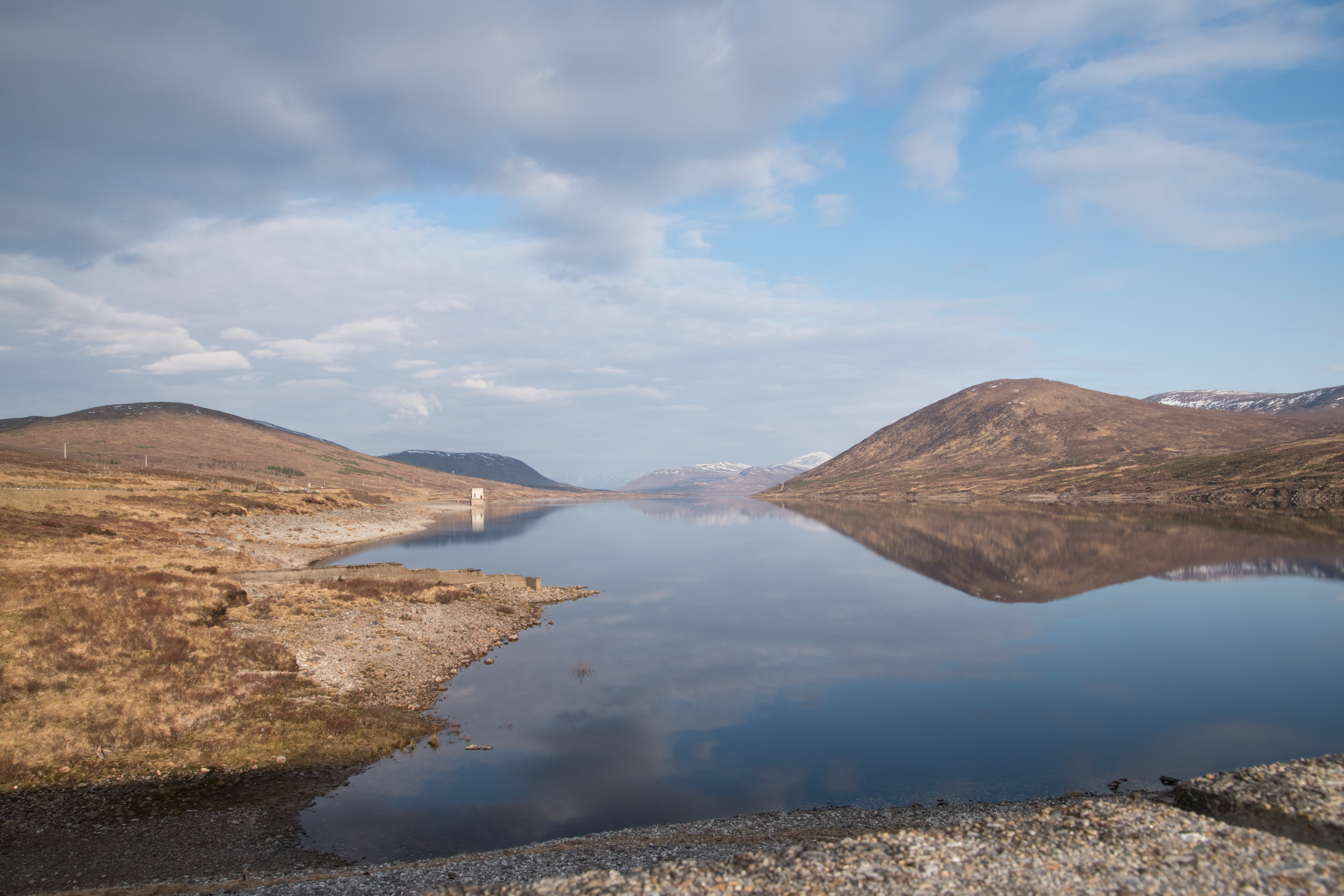 It felt almost dreamlike to be somewhere different from the North East, quite hard to explain. I made good progress along the track on the north side of the loch in complete silence; with the exception of the occasional car heading along the A835 and the abundance of little birds. 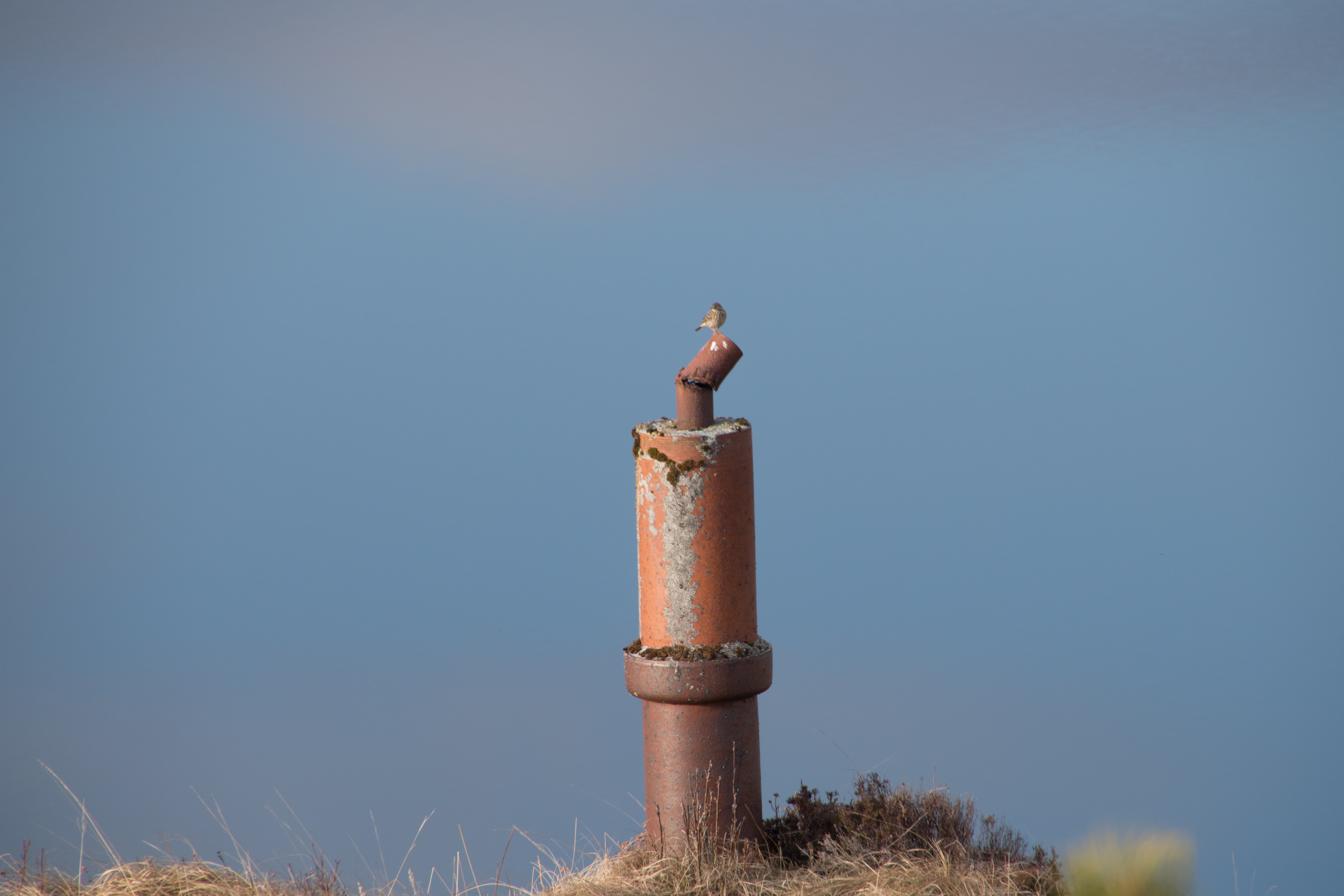 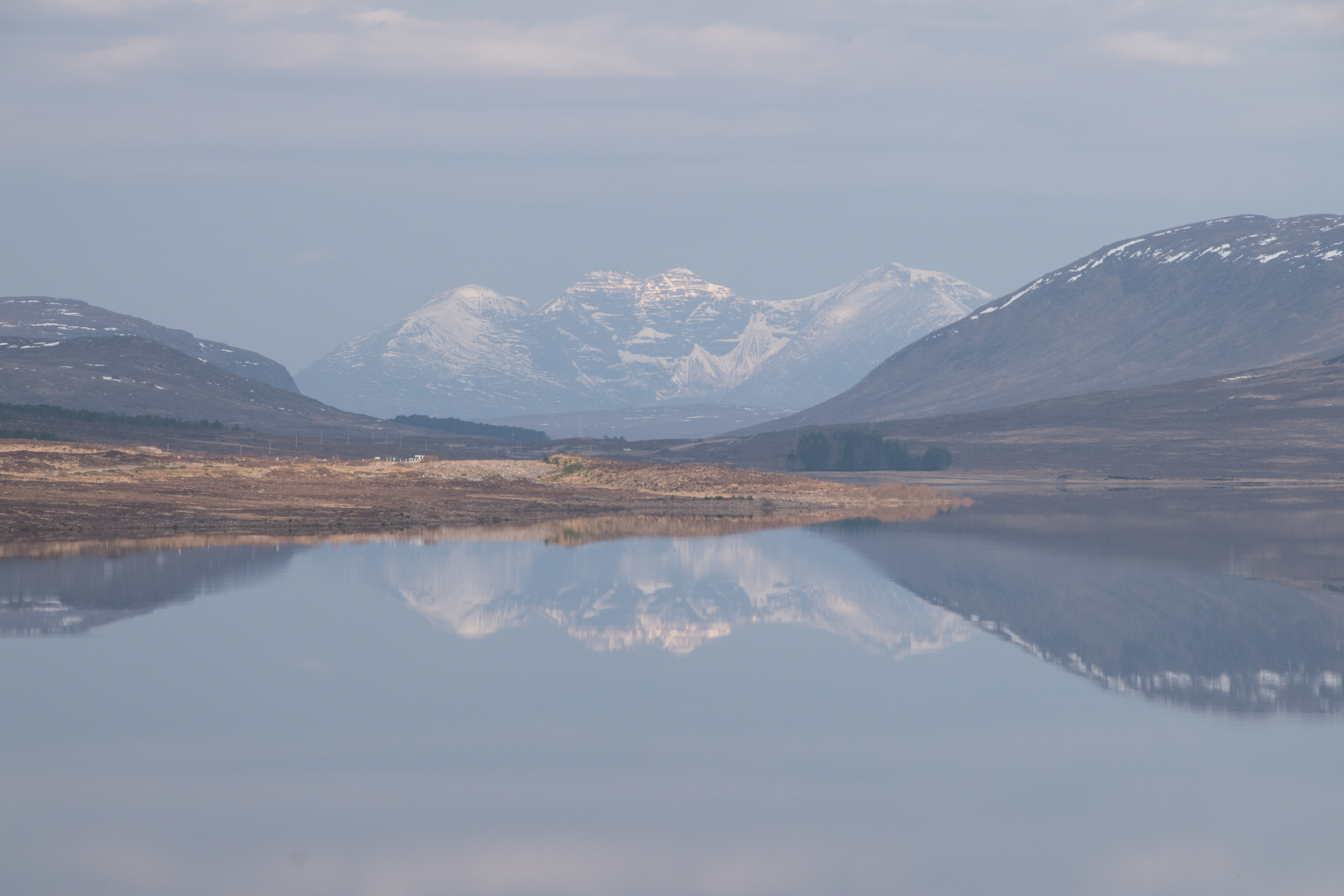 I had made good time and before too long had reached the radio mast and power station which represented the end of the main Land Rover track. I could appreciate why it may be deemed a less enjoyable walk in, and maybe it was only because I hadn’t been out in so long, but I thoroughly enjoyed it. I just plodded along with the occasional stop to appreciate An Teallach in the distance (more on An Teallach in the near future…

I continued along a faint path after the hydro power generation, bypassing a rotting dear who hadn’t survived the winter, before hopping across the Allt Coire nan Laogh.

Allt Coire nan Laogh was pretty dry, so the snow melt I had feared probably wouldn’t have caused any concerns if I opted to do the ‘tourist’ route.

Once across I made a B line for Tom Ban Beag as suggested by Walk Highlands. It was slightly spongy underfoot but there was a lot of newly planted trees and lots of smaller wildlife, including spiders whose webs which kept aligning perfectly with my face…

One thing none of my maps or research highlighted was a (presumably) new dear fence at around the 300-400m mark. Once it came into focus, I scanned along to see if there was a gate or stile – I couldn’t see anything obvious, so I routed for of the reinforced poles. 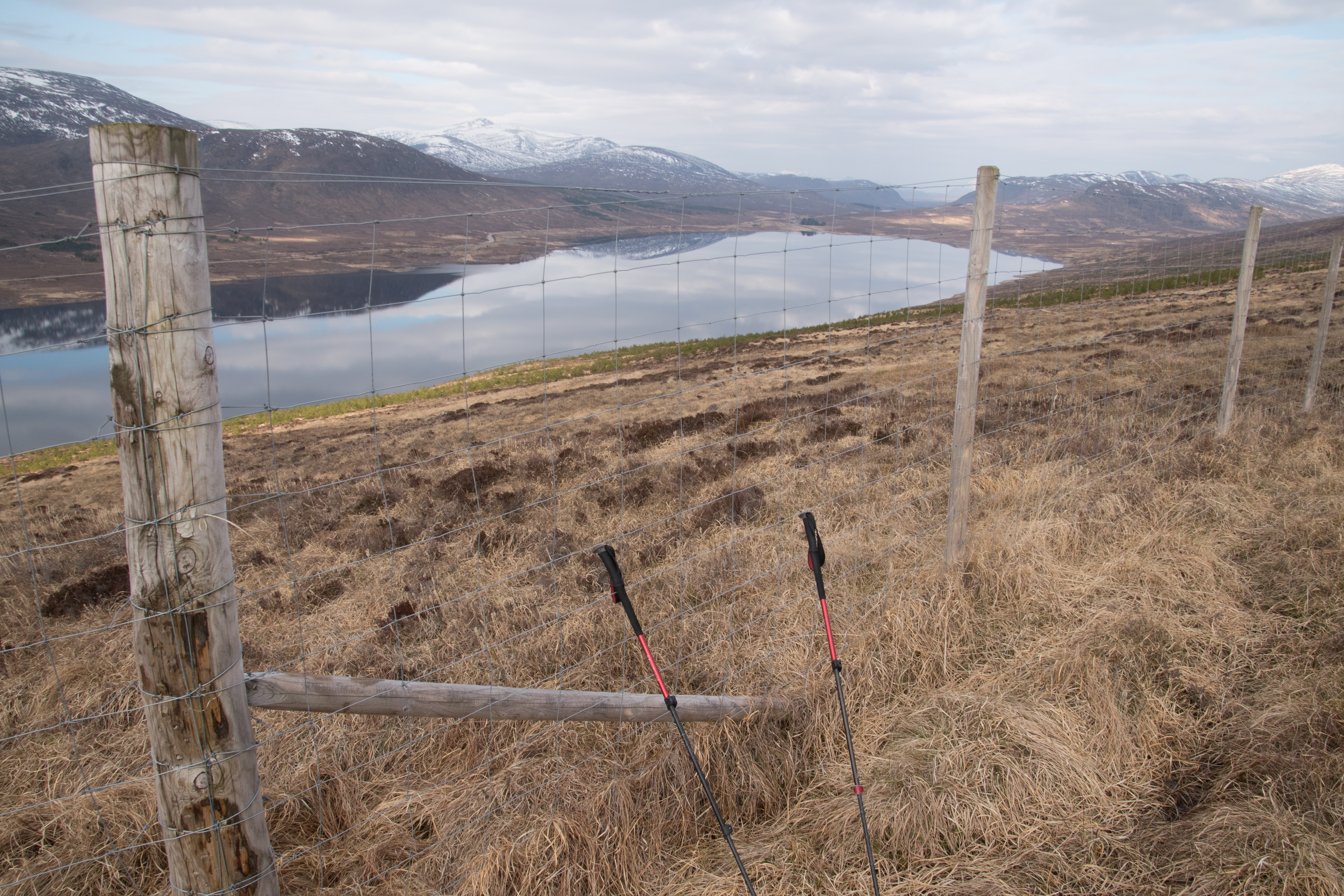 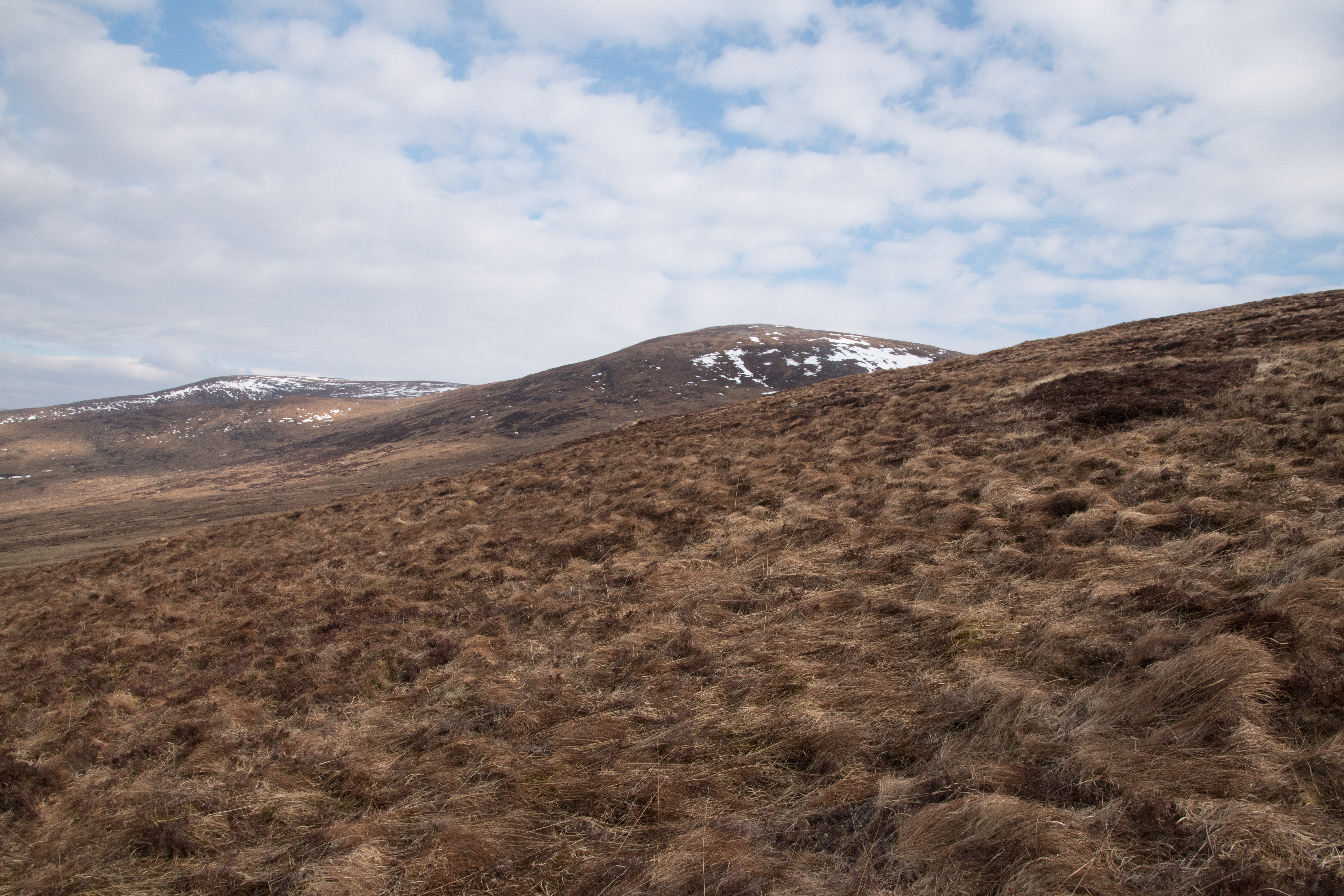 The peat bog towards Tom Ban Mor was easily navigated and before long I was at ~500m where the ground became steeper, and the first patches of snow appeared. I didn’t feel particularly unfit, but I had smashed through more than my fair share of my water, so I skirted around and found a little stream to replenish my supplies before continuing up to the 742m summit of Tom Ban Mor.

It was still calm, and the peacefulness was only interrupted by me struggling to catch my breath and the unmistakable croaky call of the ptarmigan which I hadn’t heard if what felt like forever. I took a brief seat to recover and two ptarmigans, presumably a male and female, were plodding around just about 10m away.

Although not an uncommon bird in the mountains of the Highlands, it was good to see something that wasn’t our local pigeon. 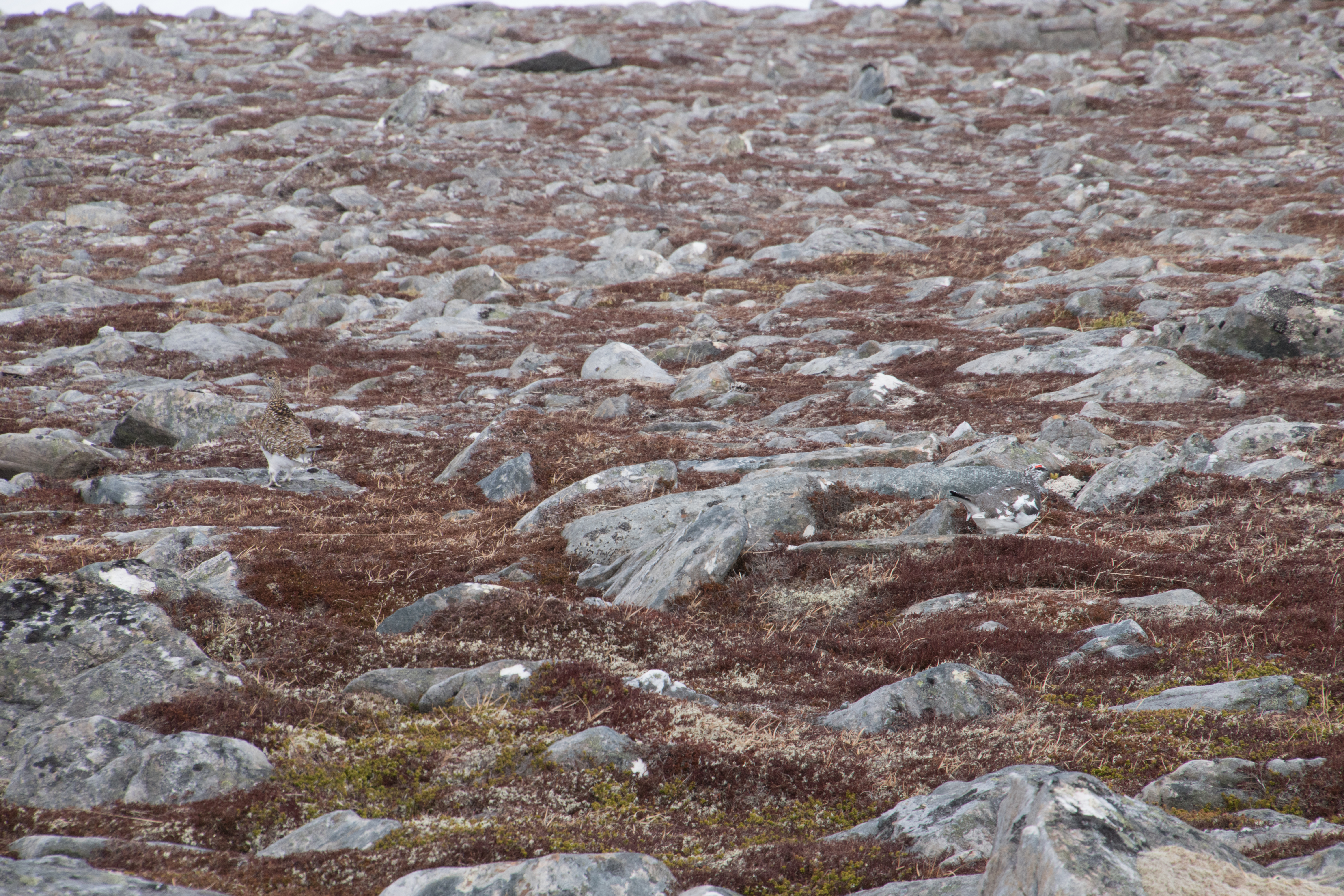 Once heading toward Creag Rainich you join a faint track and the views along the shoulder to Am Faochagach were great.

It may sound strange but having been away from hill walking for so long it was almost overwhelming – such a great feeling to be back! Looking at the photos it may not be the most beautiful location in Scotland, but for me on the 17th April 2021 it couldn’t have been better!

I reckon if I opted for a more scenic location (like An Teallach), it would have been ‘scenic overload’ and I may not have appreciated it as much as it deserved – this was the right level of scenic…

Happy to be back – got one of the ptarmigans to take my picture! 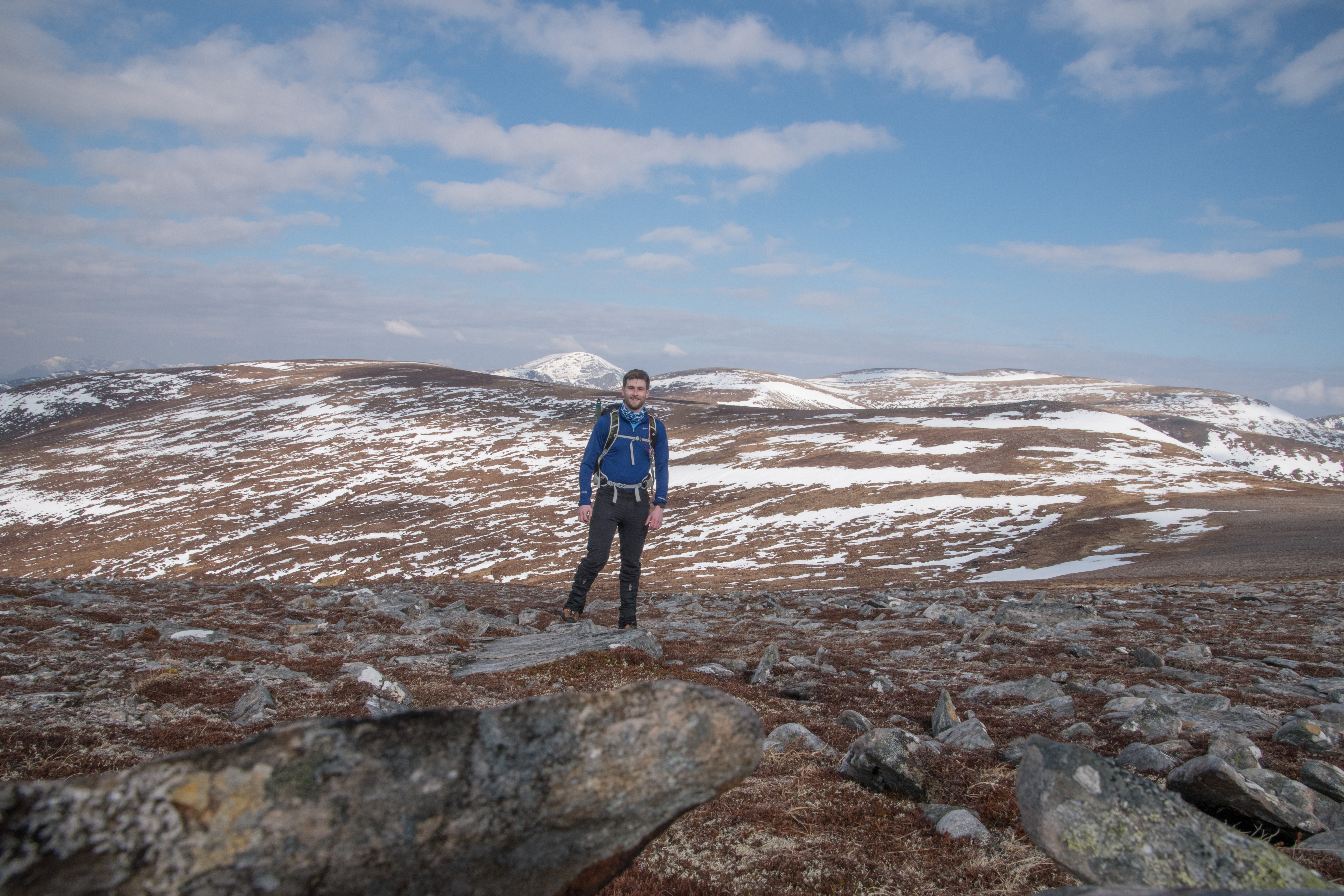 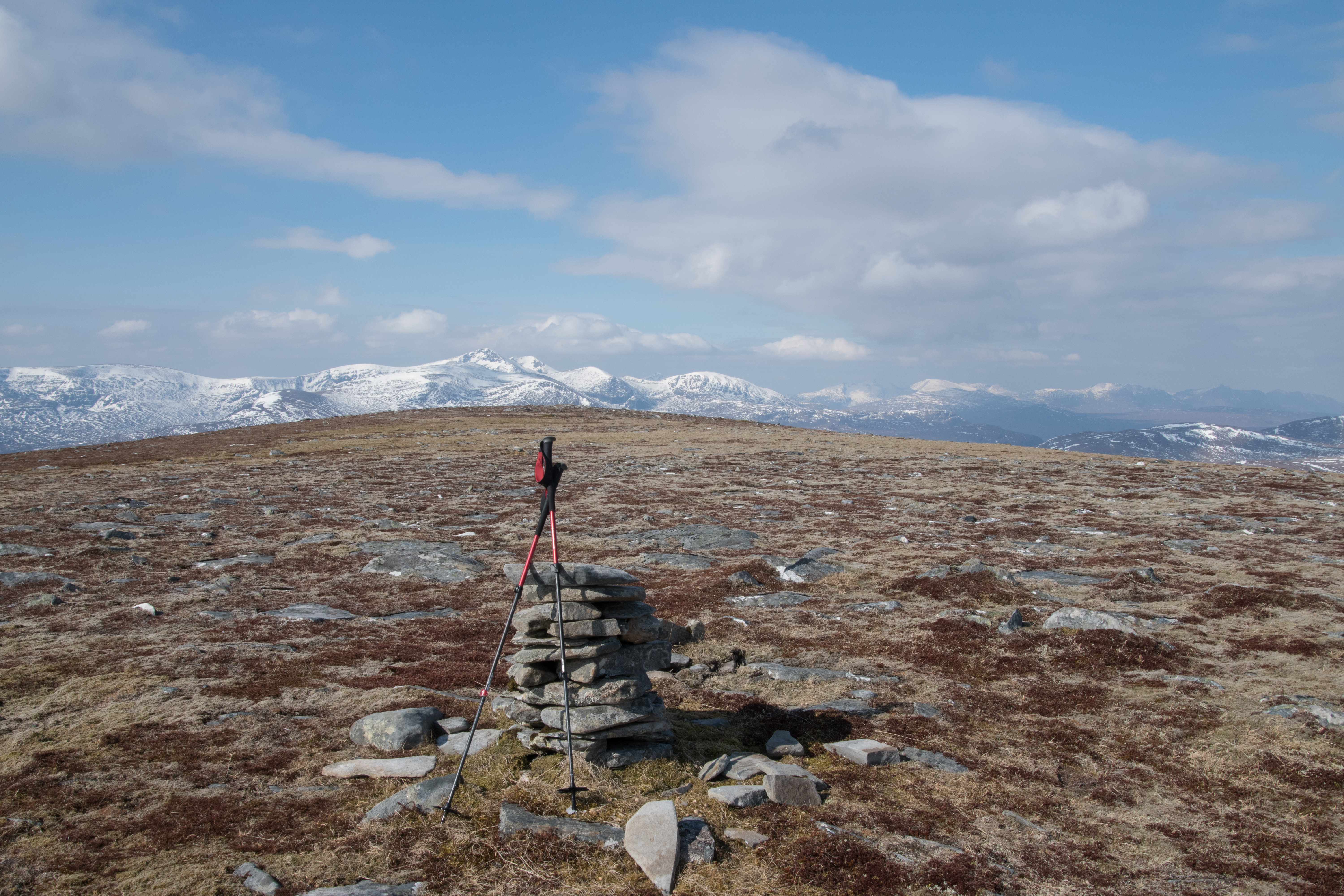 It was 10:45 when I reached the summit of Sron Liath and I hadn’t seen a single person all day. I was soon to be approaching the bealach where I would join ‘tourist path’ for the final two kilometres up towards the summit of Am Faochagach. I could see one couple in the distance, but there wasn’t much chance of this being a busy hill! 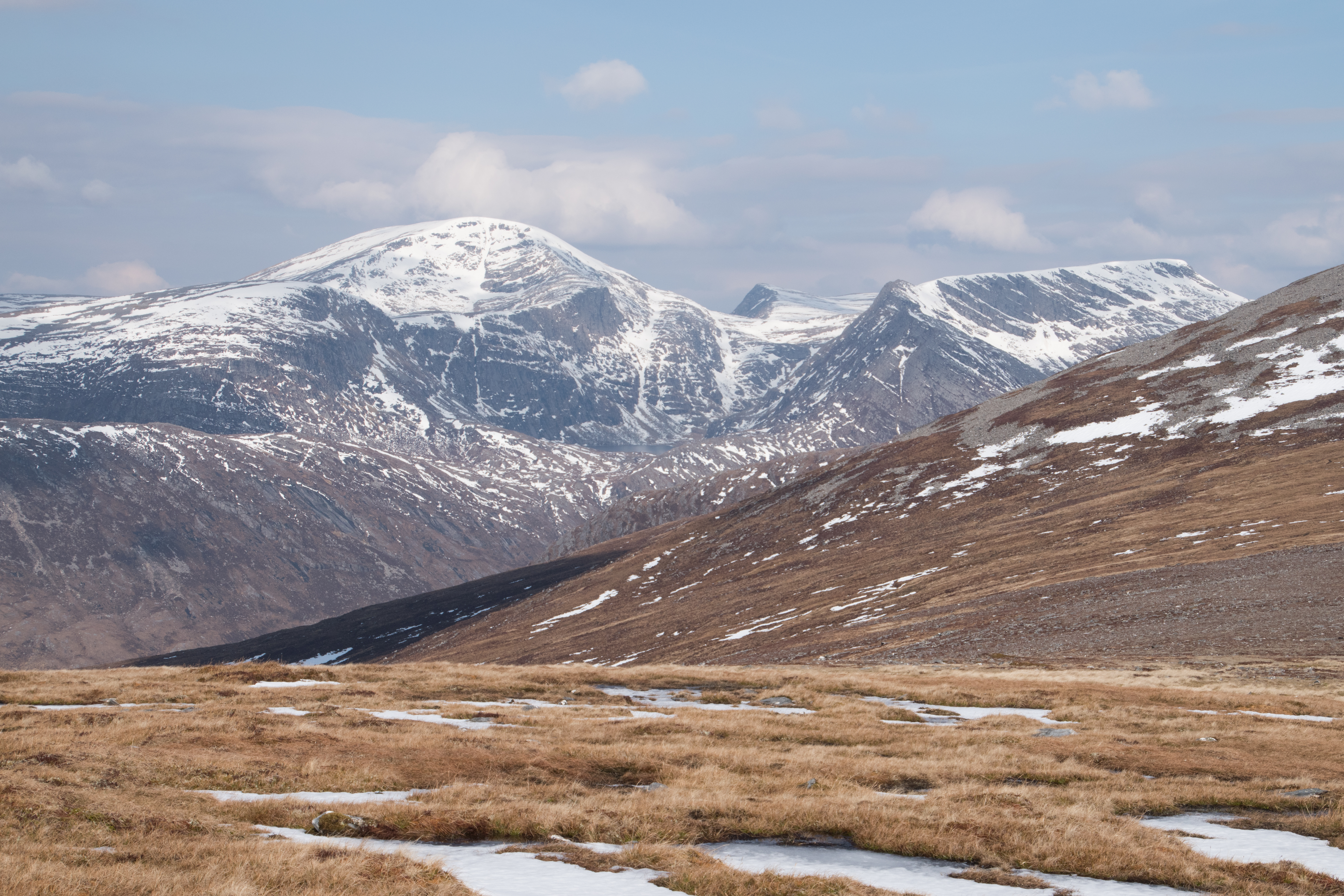 The final approach to the summit was straightforward. There were patches of lying snow, but they were extremely soft, meaning my winter kit had been carried for no reason – better safe than sorry, I guess…

I reached the summit at almost the exact same time as the couple who I had seen in the distance some time ago. We chatted briefly, but their wet feet from the river crossing quickly became cold so they set off. My feet were bone dry – smug…

I perched myself on a rock from the summit admired the views and tucked into my lunch. Often in a rush, today I wasn’t so I got out my deep winter down jacket and snuggled up. 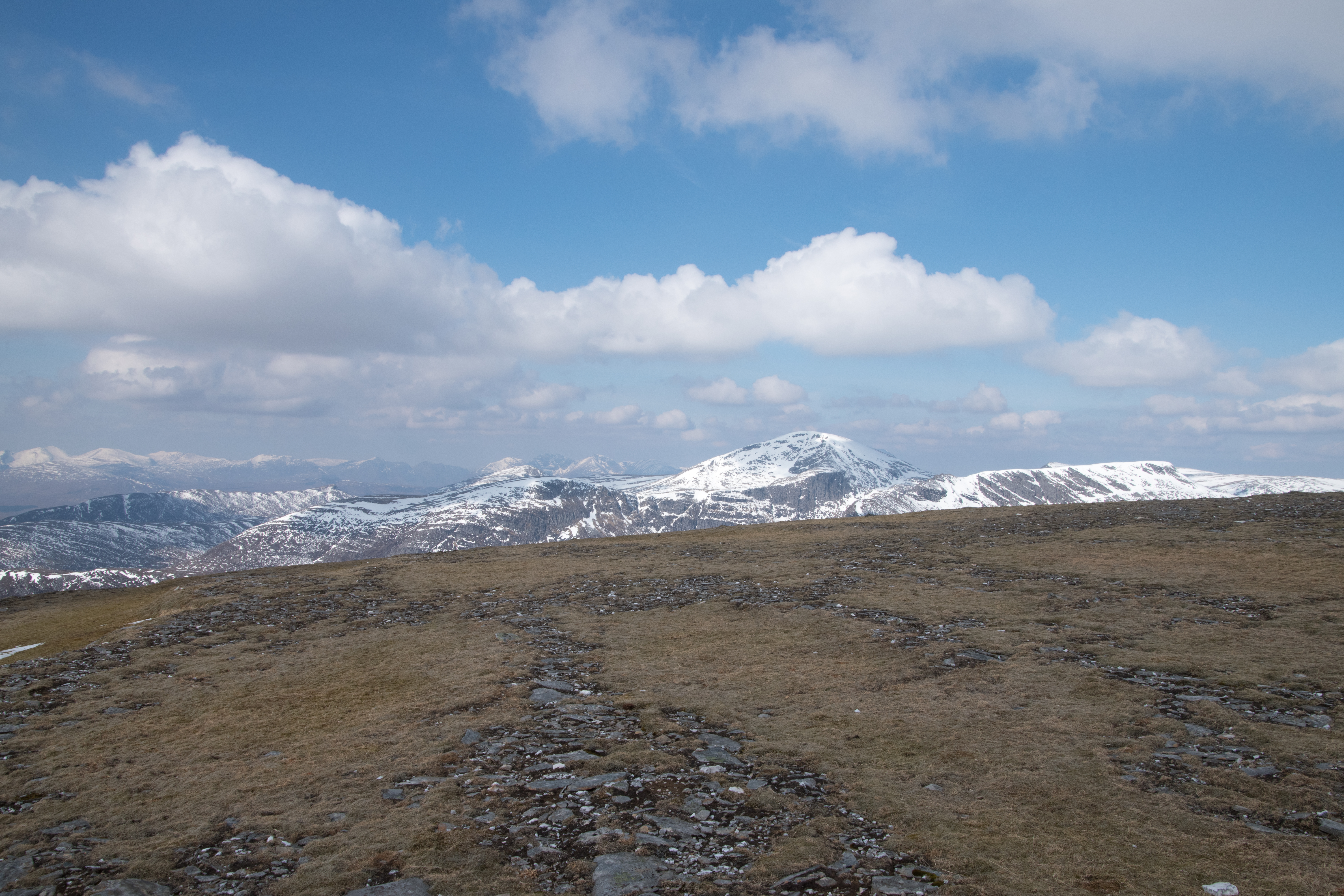 It may not be the most sensational summit, a somewhat rounded dome, but it in good visibility there is so great views in all directions.

Once I had finished my first bag of Jelly Babies in over seven months (boy how I missed them!), I packed away the down jacket and set off retracing my steps back to the car. 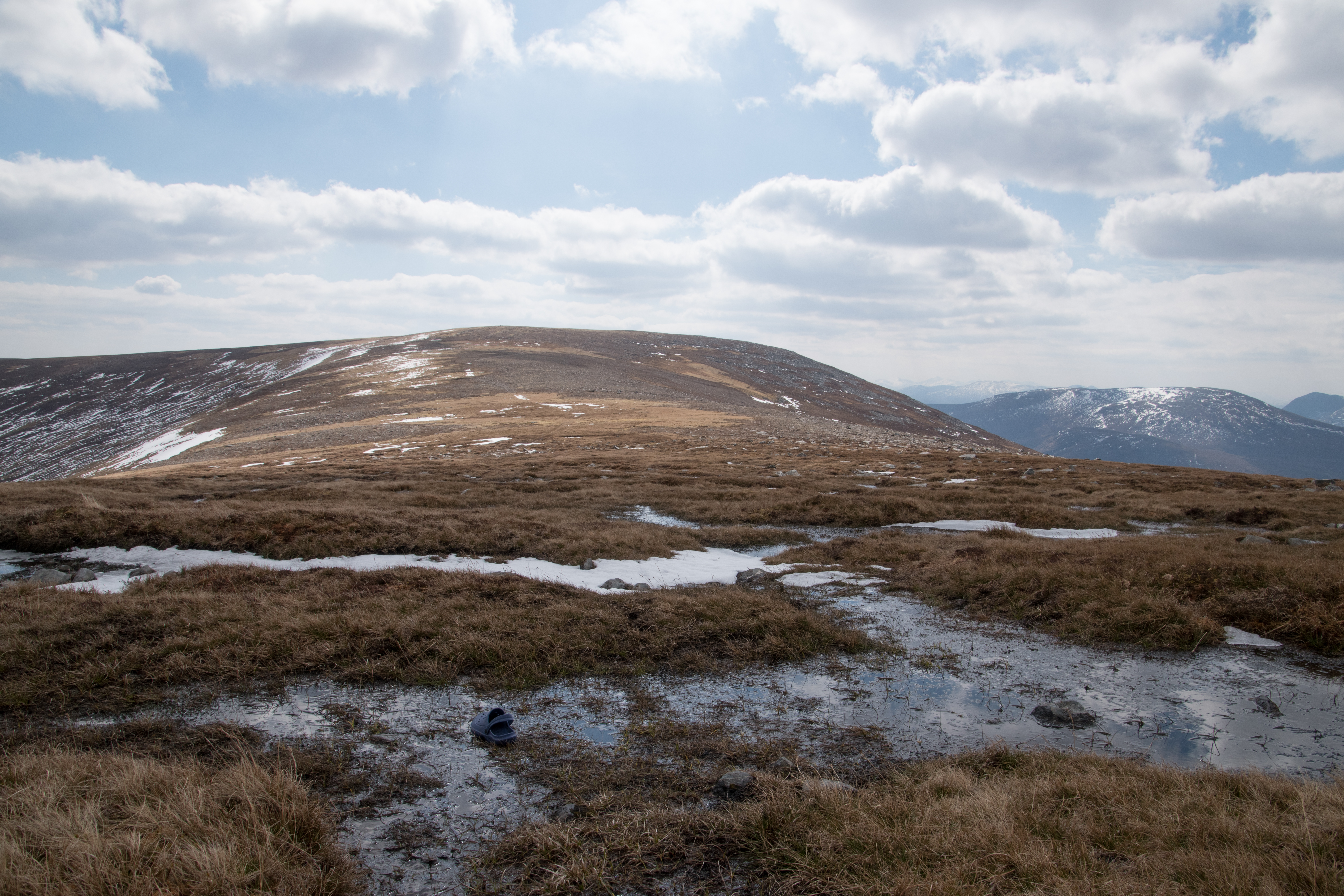 Not often you see a native wild Scottish croc, and the first time I had in 189 Munros – unfortunately as its partner was no longer around it probably wouldn’t survive much longer on its own. I did what any good hillwalker would and packed it up and took it back to its final resting place (some recycling bin in Aberdeenshire). 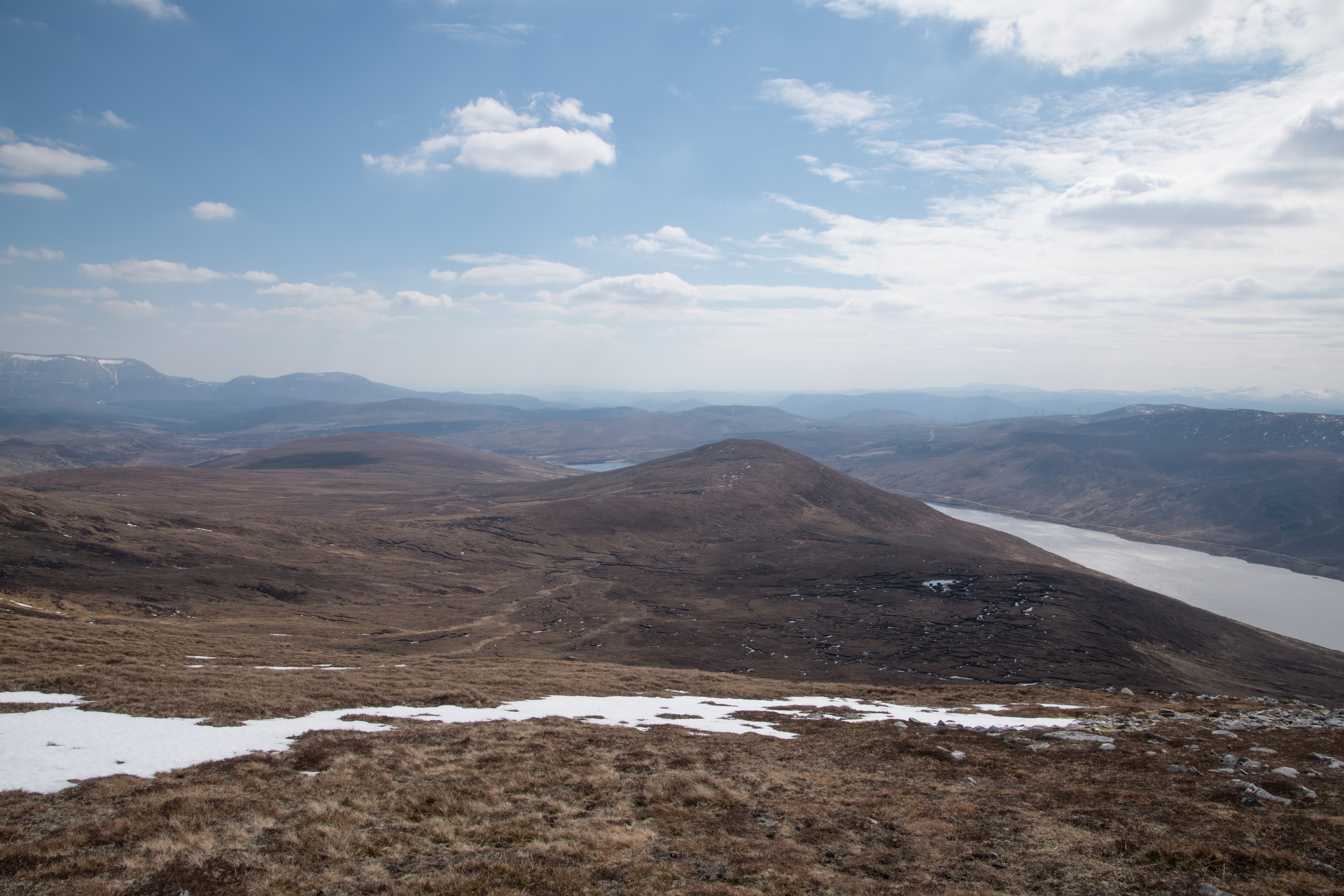 From the summit of Tom Ban Mor I was aiming just to the right of Tom Ban Beag and Loch Glascarnoch looked somewhat longer than it did on the way out! Dam (and my car) just visible on the left-hand side of Tom Ban Mor. I retraced my steps almost exactly, stopping in the same spot to take on some more water and I had remarkably hit the exact same reinforced pole to cross over. Either that or two poles had very similar bird poo markings on the top (highly possible).

Once I reached the Land Rover track this was where I really wished I had taken my summer boots. Each step in my winter boots my feet were becoming more ungrateful for this outing. 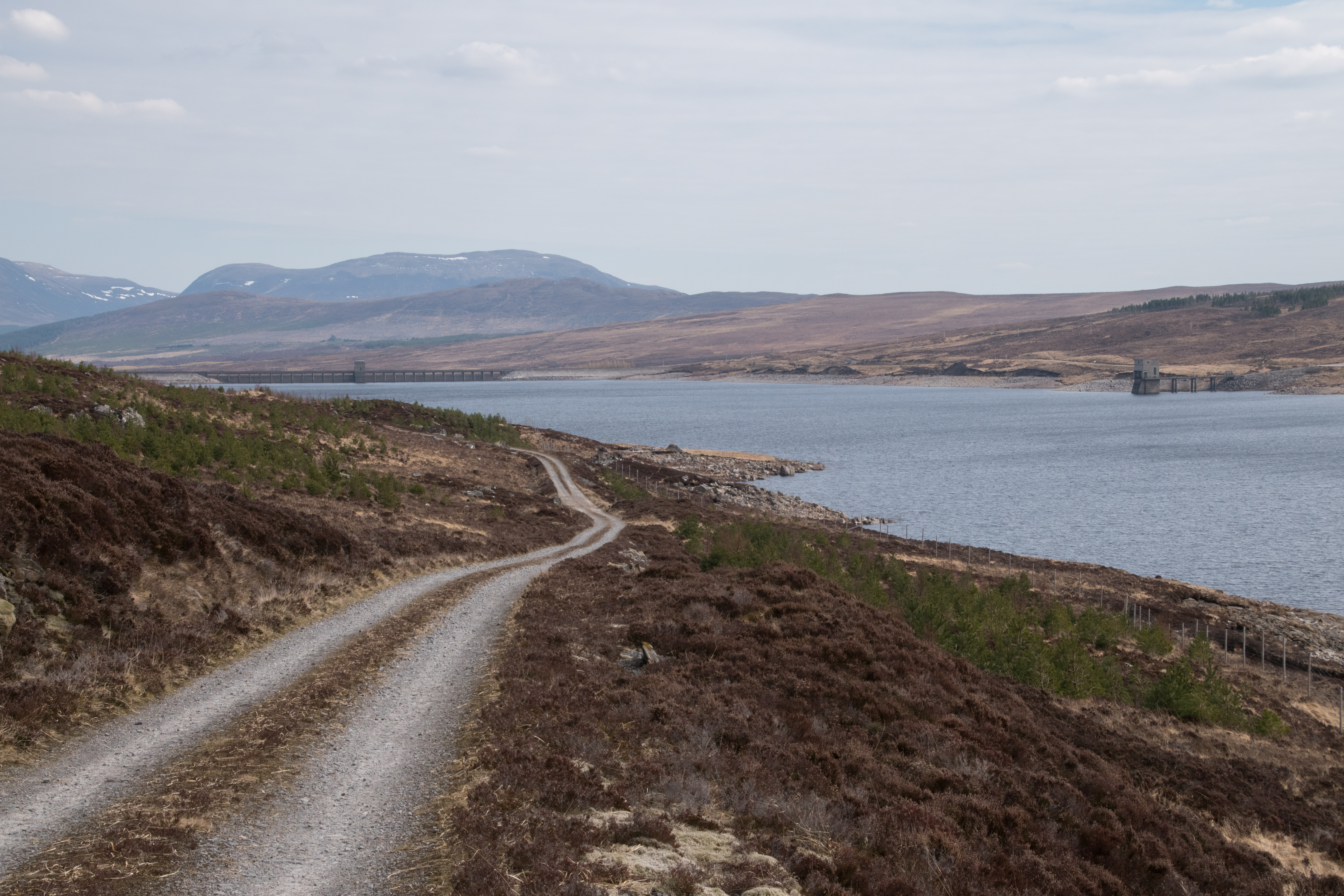 Knowing I wasn’t too far away from the dam and it was only 14:30 I pinged my good pal Chris a WhatsApp to see if he was kicking about for a catch up in Inverness-shire on my way back.

As I was crossing the dam there was only one other car idling next to mine, who kindly launched a banana peel against my wheel and the sped off. Plums.

I stopped for one final picture and noticed the water marker on the building in the middle of the dam. Took me a while to roughly convert the feet to metres but was certain that 830 feet wasn’t the depth of the loch – assuming it’s a depth above sea level. Which seems daft, but never mind – there must be a good explanation? 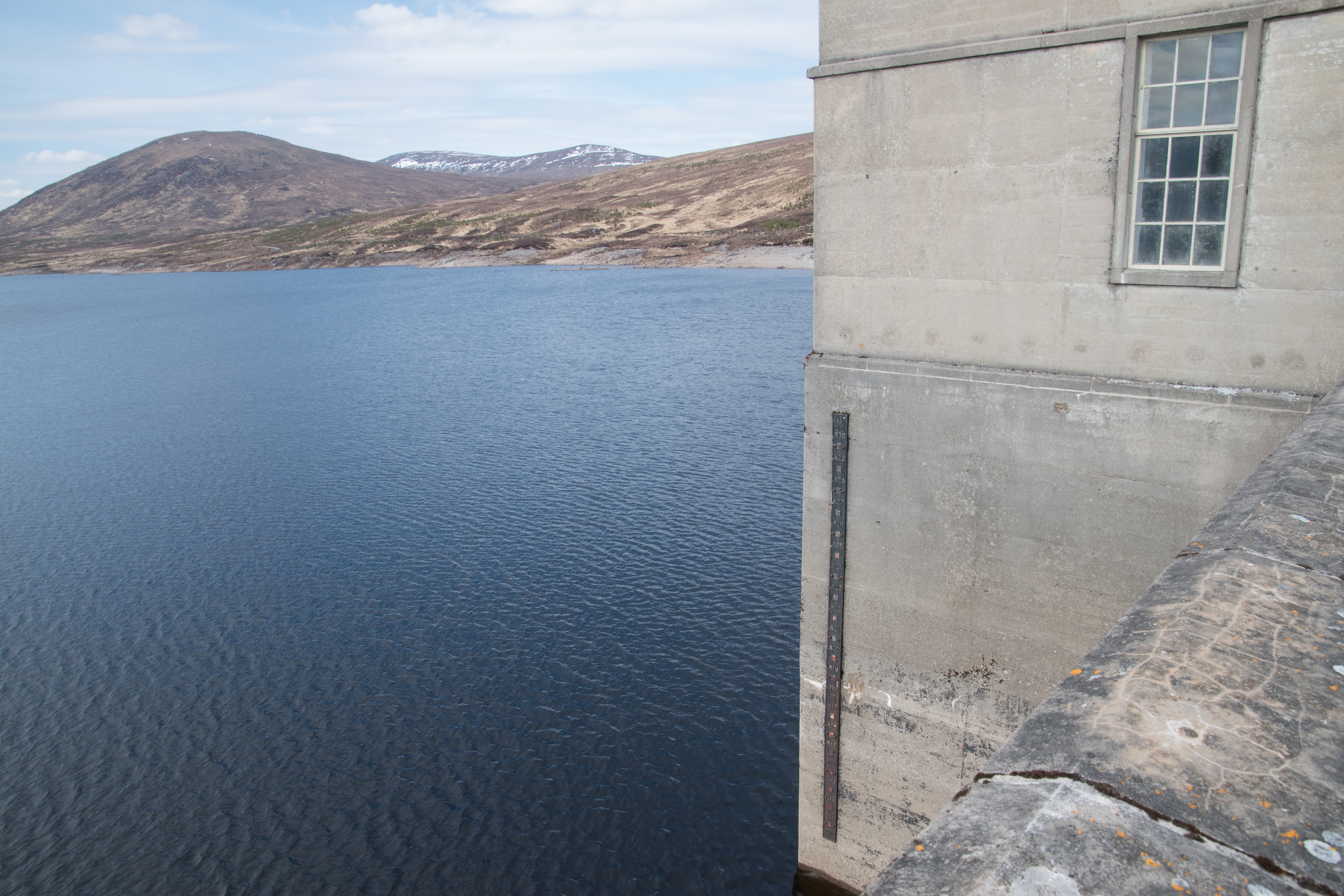 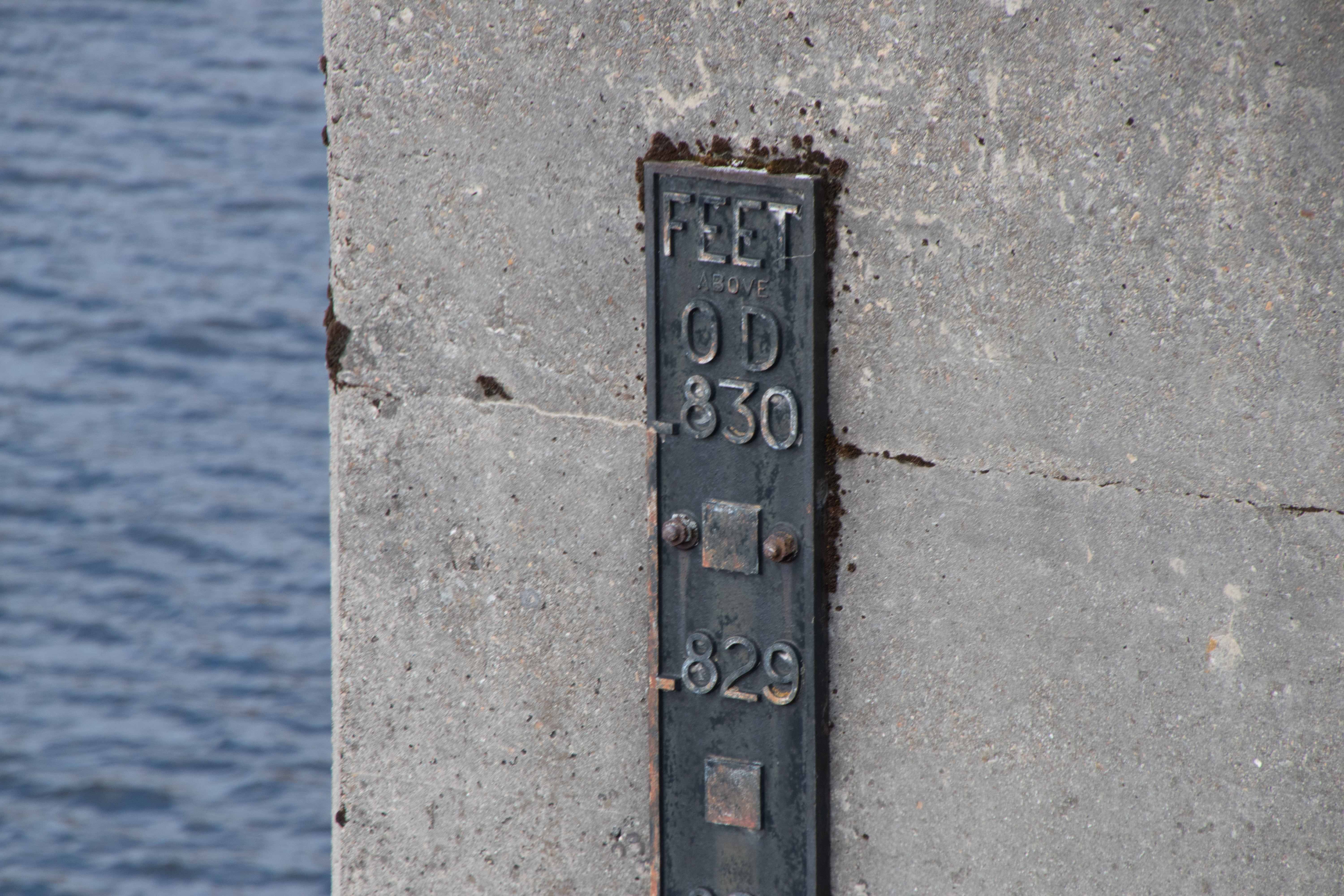 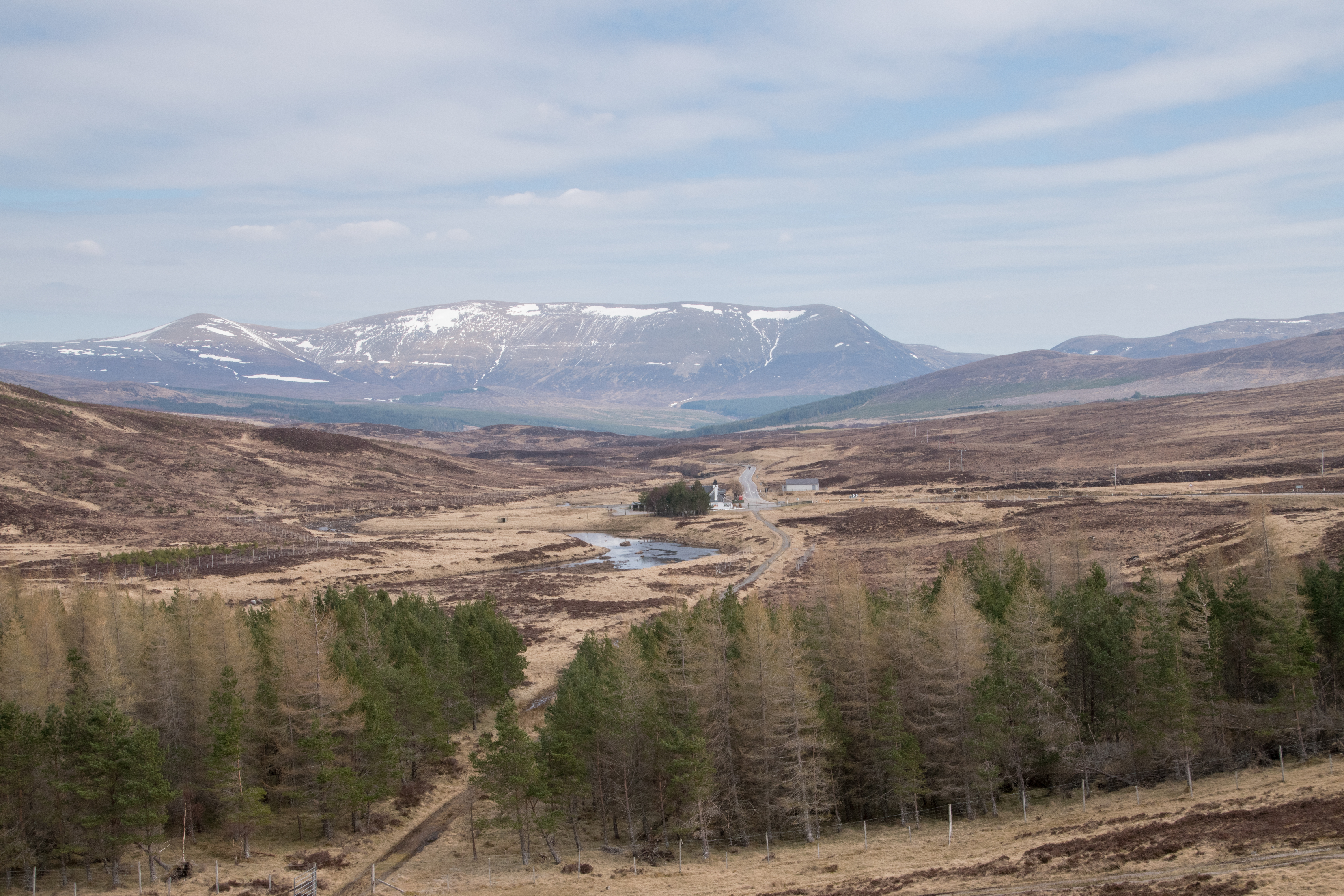 Although the Aultguish Inn was closed when I did this route, if it was open, even more reason for this being a better option than the normal route – who doesn’t like finishing at a pub!

There was one final hill treat in store for me. Taking my boots off and a quick wet wipe of the feet – wowzers.

I set off enjoying the still surprisingly quiet roads and headed towards Conon Bridge to meet Chris for a socially distanced outdoors coffee.

After a quick caffeine boost and laugh at the somewhat over engineered monstrosity of a roundabout next to the Conon Bridge Co-Op / primary school I set off down the much-dreaded A96.

I swear each and every time I return to Aberdeen from Inverness, I promise myself that next time I will take the slightly longer route over the Lecht to avoid the monotony of all the little villages, millions of roundabouts and a severe lack of overtaking places the A96 has to offer

. Although a tiring day out it was a Saturday I thoroughly, thoroughly enjoyed.

Overall, I seen 9 other people, all within 1km of the summit. On a day where all the popular beauty spots were rammed – I couldn’t have picked a better hill or route. For me Am Faochagach will be remembered as a great little hill!

What a pleasure to be back in the hills and most importantly here is hoping for no more restrictions in 2021!

Thanks
Andy
Click to mark this as a great report. Register or Login free to be able to rate and comment on reports (as well as access 1:25000 mapping).


Before the Lockdown Boredom - Ben Starav 5

A Grand Day Out

Location: Aberdeen
Mountain: The next one
Gear: AlpackaRaft - Explorer 42