Beinn Ghlas and Ben Lawyers in the clag

Today the weather forecast was not the greatest so I decided to go for a shorter solo hike up Beinn Ghlas and Ben Lawyers. The path was clear and well maintained. I got some amazing views before walking into the cloud. The way up Beinn Ghlas was covered by mist. The summit was marked by a small cairn and as it was cold, windy and no views I didn't hang around there for too long. After the summit of Beinn Ghlas the clear path continued on the ridge which felt like walking on top of the cloud with just a path emerging from a white fluffy mist. After descending to a bealach where a small half frozen lochen marked the lowest point, the rocky path started climbing again. There is something magical and eerie about the mist that makes me feel like there path does never end. After lunch and and coffee and a few shots of the mist, I started descending back the same route back. At the bealach I took the path to the right descending on the side of the hill. 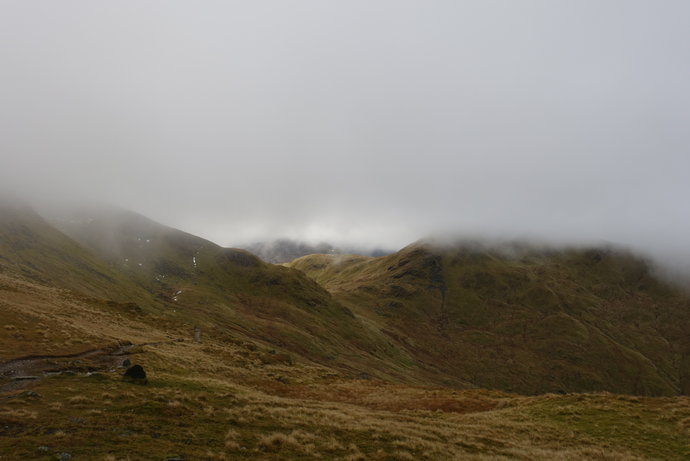 I saw the end of the faint rainbow but the sheep got the before me and stole the pot of gold. When the walk was almost finished I saw very dark clouds coming, I was very fortunate that the weather played the ball for me so far. I had a great time hiking another two Munros now its time for a long drive back to Inverness.
Click to mark this as a great report. Register or Login free to be able to rate and comment on reports (as well as access 1:25000 mapping).