Finally just about back in the game

I know - its been bloomin ages since I posted anything..

Had another ankle operation back in January, and boy has it been slow to come back.. You think everything is healing fine, then just the slightest jarring on the wrong terrain, and I'm back to square one..

Dad has been nagging me to go out and he mentioned last week he would be wanting some scrambling, so my days off this week we went.. A warm up on Gear Aonach on Monday - Up the nose and down the zigzags.. 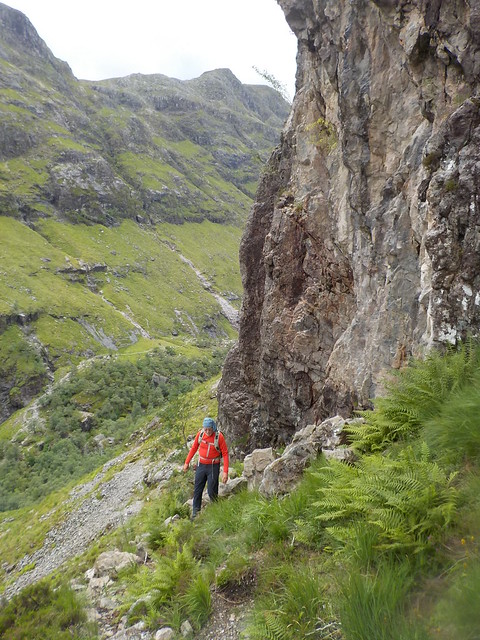 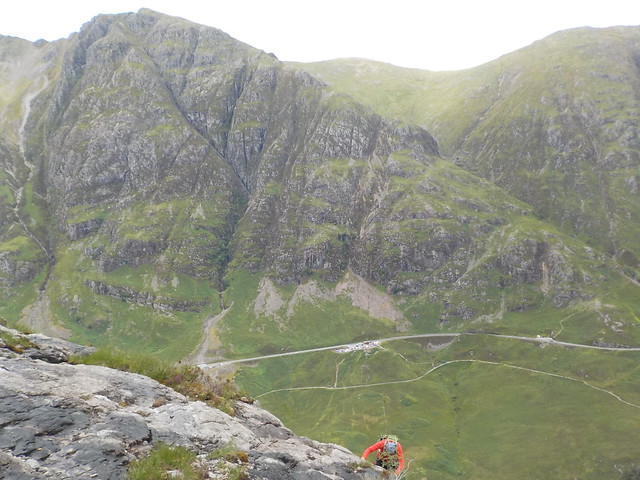 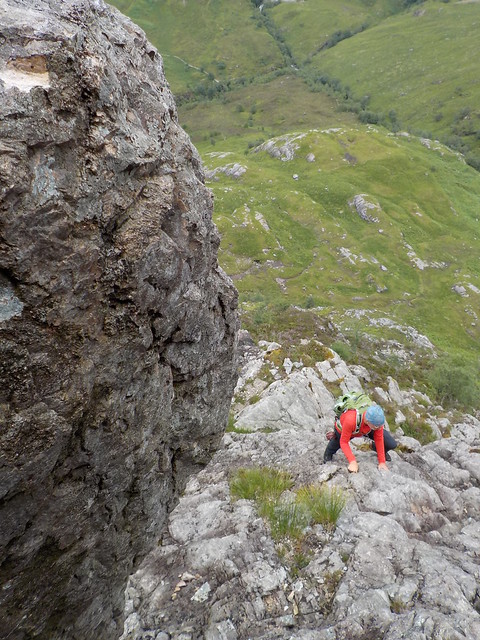 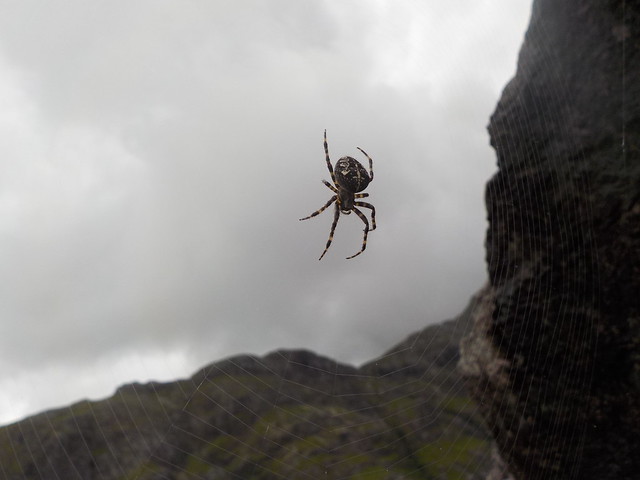 Orb web spider - what a beauty (if you like that kind of thing!) 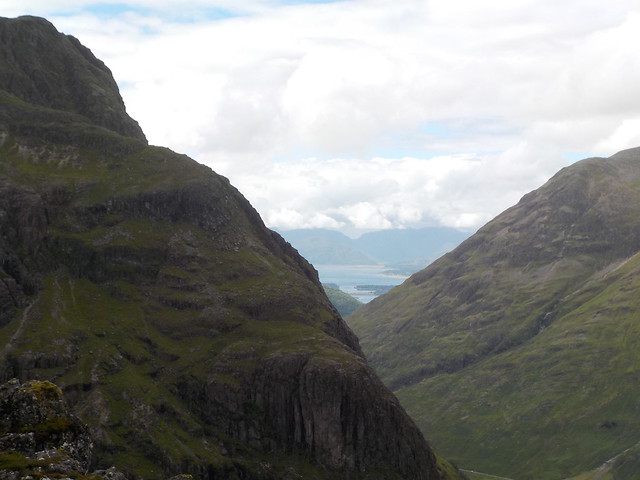 Awoke in Strontian camp site to find it was raining.. Looked like it was clearing up though, so we set off, arriving in the deserted parking spot about 10. Another heavy shower came over and things looked a bit grim.. Still we had come all this way.. might as well set off with fingers crossed..

Garbh Bheinn.gpx Open full screen  NB: Walkhighlands is not responsible for the accuracy of gpx files in users posts

We headed up the glen. Just as boggy as I remembered it.. Last time was in the dark, with only one torch between us, and I had hoped we could pick a bit of a drier path but no.. My scrambling shoes were squelching within 5 mins 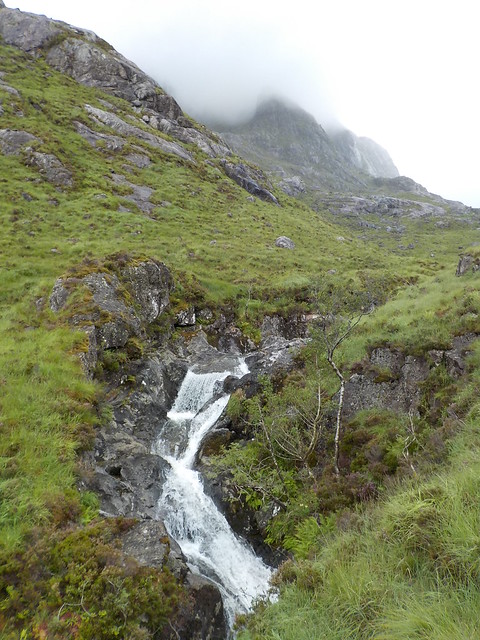 We had thought about doing eagles nest slabs as a prelude, but we passed them with our heads down, and didn't realise until it was too late.. When we saw the descent we would of had to do from the other side, it was far more than the 100m promised by the book, we were glad we skipped them in the end.. 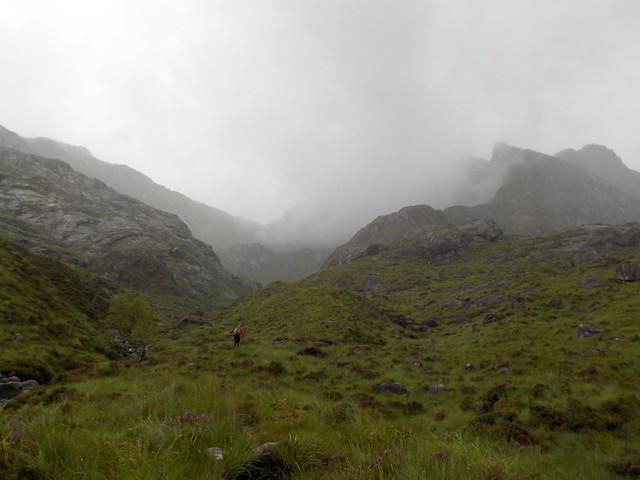 The rain eased as we got up into the corrie, although we did miss the first wee crag, at that point I wasn't caring - feet so waterlogged they were starting to get ripped apart, and trousers sticking to thighs badly enough to chafe.. I was having type 2 fun at that point.. But, boy, what a corrie and peaks and cliffs whirled about in the mist.. spectacular 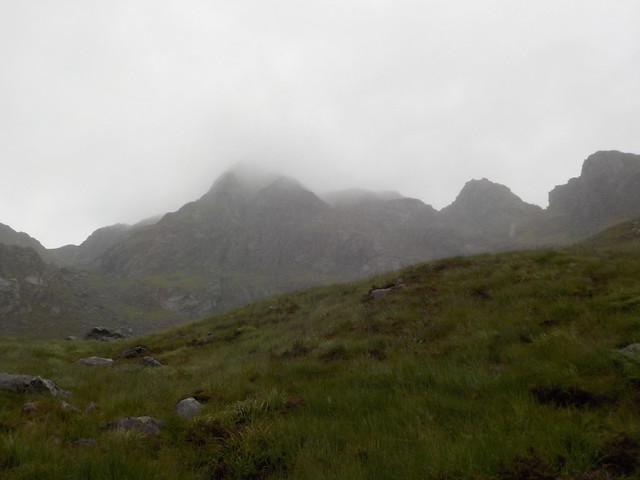 We trudged up steeply to the route, and took a bit to eat before it started.. A slabby nose, first pitch easy, but a little harder than it looked at he second tier.. I was worried for the crux if this was the easy bit 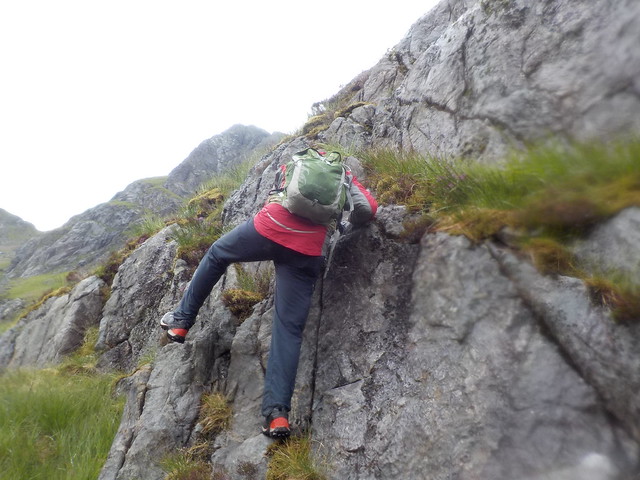 The main ridge loomed ahead.. 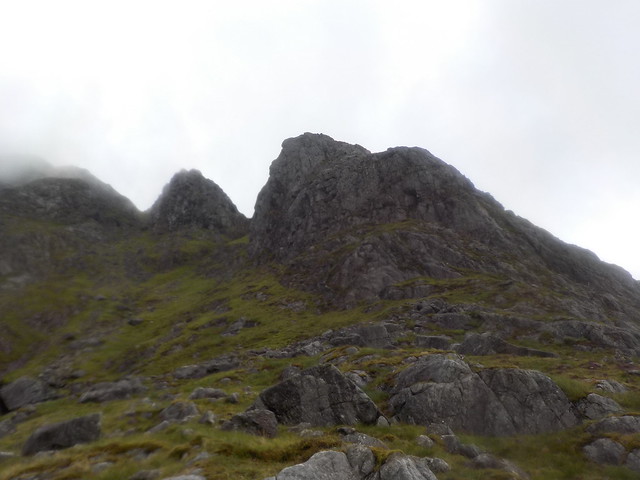 The first bit of it, I tried the crest, as recommended in the book, but I ended up stuck half way up, with an overhanging cleft above.. The legs started to wobble.. I couldnt get up nor down

But with some directions and encouragement from below I managed along a wet sloping ledge covered in foliage that was too easily detached for my liking.. but found the right spot - ledges filled with gravel are a sure sign of the right track

Then there was the crux (Nae photos

) just left of the crest there was a clean slippery chute, that wasnt so bad, then up right on a heathery ledge to two giant blocks.. I couldn't work out the first one, ended up using a touch of scramblers knee with a shove from behind.. Dad subtley teased me about that later - 'he can climb with finesse'..
The second block was a bit easier thanks to a jammed flake.. We were up quite high now, and the angle was bloomin steep... The ledge was only just big enough for two, so I started up the groove above, while dad tackled the second block. I lost my bottle 2 moves in when Dad voiced concern about whether it was the right way.. There was nowhere else that could be though, and now we were both on the ledge Dad had to go first.. There were good big jugs all the way, but you were straight up for ages, and while we climbed more rain came

We finally got to a grassy ledge just as the heavens really opened, and we scrabbled for waterproof troos 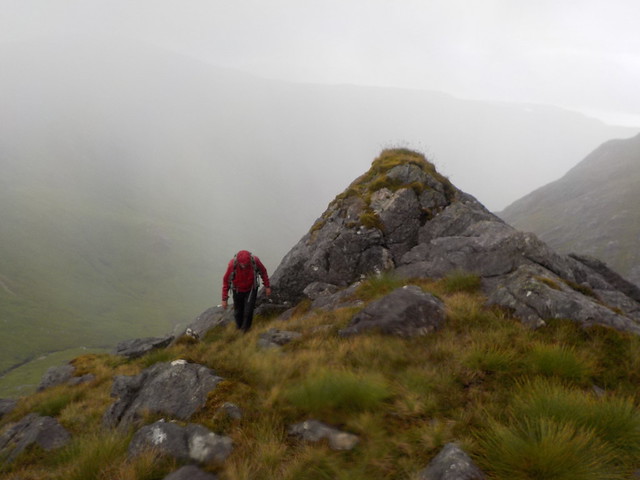 The ridge got narrower and the outcrops more entertaining, rain ran up my arms and down the back of my troos, but it didn't matter, so much fun was being had.. It looked like we were coming up to a huge face which looked impregnable, but our ridge curved round the side in a narrow pinnacley swoop - loved it! although the photo reveals how wet it was rather than the details of how good it was.. 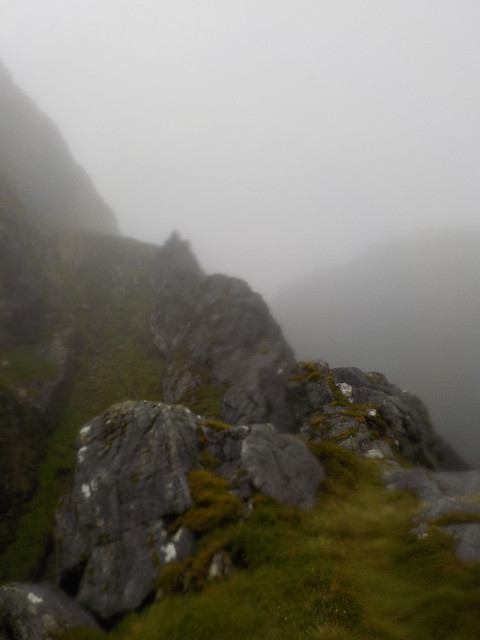 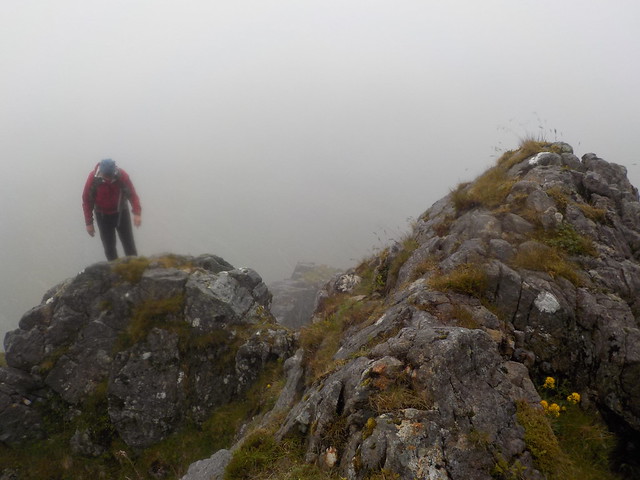 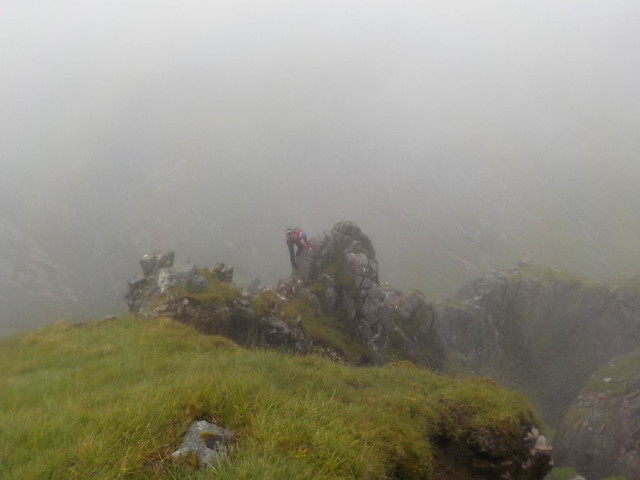 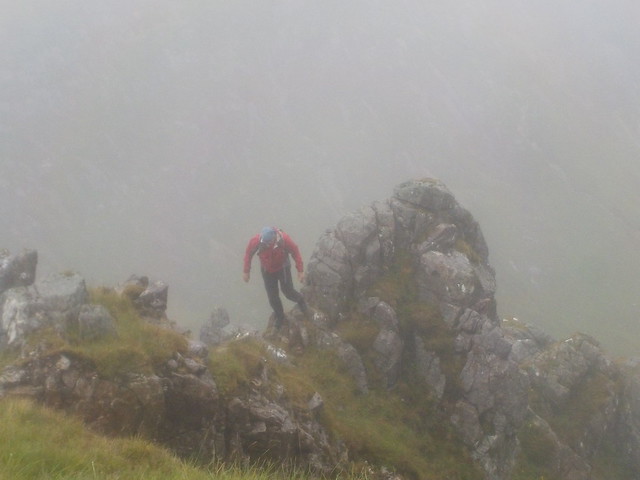 After that, the ridge ran into the main hillside.. The book said left, but my Dad wanted to go right - it looked like a grassy plod that way, but there have been some land slips or avalanches there and the terrace doesnt go far, so we went left as suggested.. The grassy ledge that led to the non-vertical slabs beyond, had also suffered from some kind of dramatic erosive event so it was a precarious traverse.. only to find that in the wet, the slabs were treacherous.. All the dimples you would use for traction were filled with slippery black mossy stuff, so it was a delicate operation and I was forced onto a grassy rake.. I worried we would get lost in the mist, but I found a big arete, that could only be the one described in the book, and once the tricky pull up onto it was over, it proved easy, and led to a walk 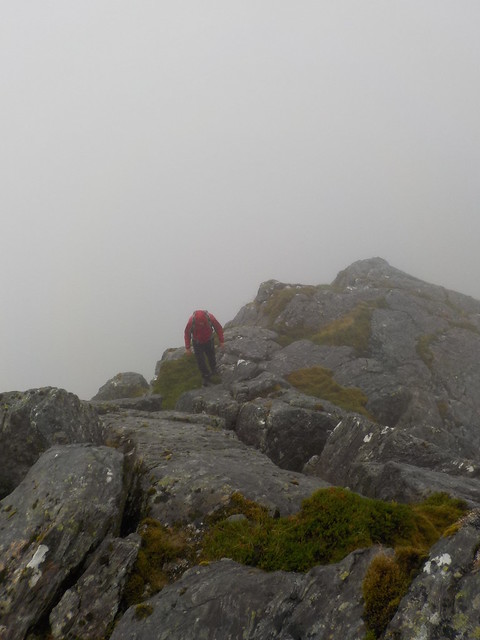 There were a couple of rocky tops on the way to the summit, some of the outcrops good, but all avoidable if you wanted.. The wind was up and the rain was still pouring so a relief to finally see the summit 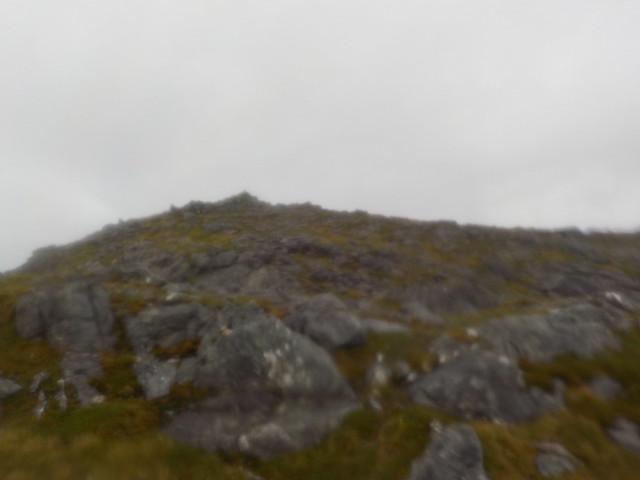 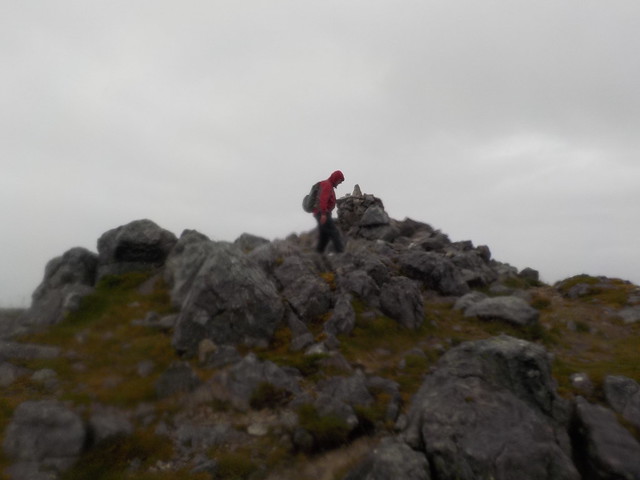 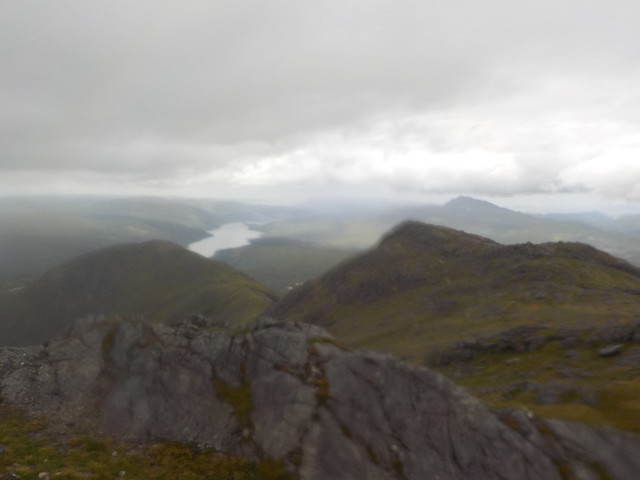 Before we were down to the Bealach, the rain stopped and being on the lea side of the hill, we finally stopped for some energy.. Weather continued to improve from then on 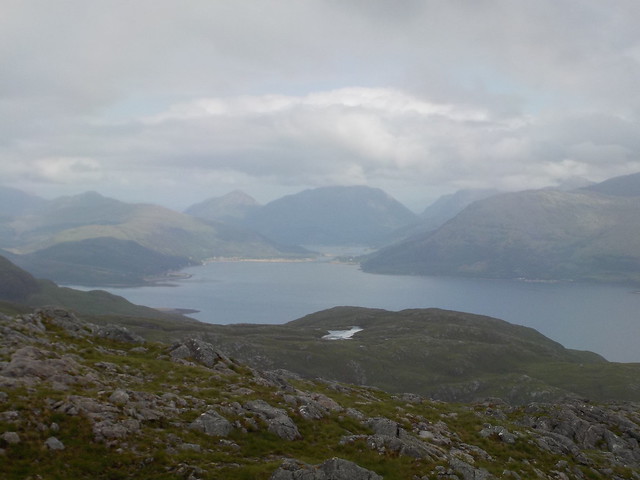 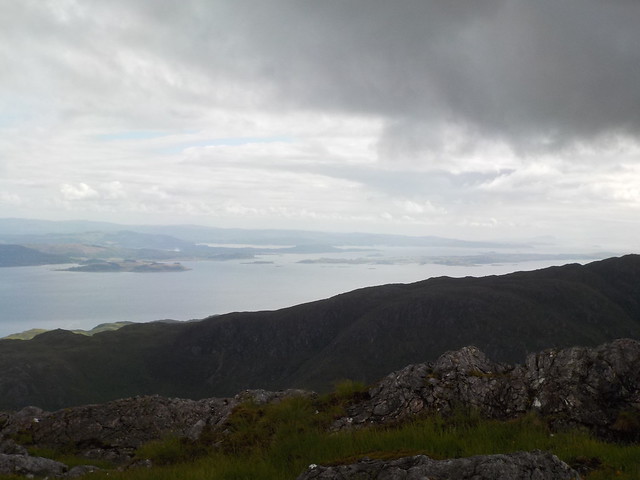 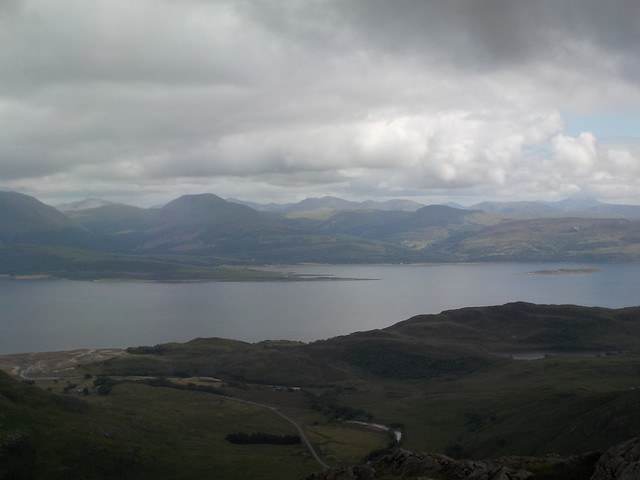 All of a sudden, the car park was just below - hurrah! Met a new friend on the way back too, he was cold and snuggled cutely into my hand when I picked him up 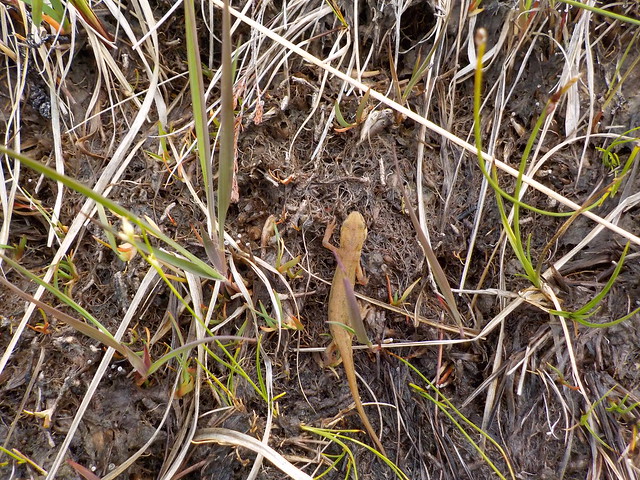 Got back to the van, feeling like we had had an epic day

We just slept in the van and got the ferry back over this morning. Have to say the quality and length of the scramble were top notch - rivals anything I've ever done - cant wait to go back on a more enjoyable day

Fell & Pike - Must be Langdale

The last of the Pentland hills

Three of Cinque Cime and 40 tunnels