An easter wander around Knoydart

Given the awesome weather over the Easter weekend and the fact that, for once, good weather coincided with a bit of time off work, I decided to head up to Kinlochhourn early on Monday armed with a backpack and head up into Knoydart. Leaving the busy carpark at 9.30 I headed out along the path on the lochside towards Barrisdale, passing a decent number of people walking back out from a weekend in the hills, many looking like they'd caught the sun. It was hot, there were no midges, the sky was blue, the wind was light, things were looking promising!

As Barrisdale bay swung into view after a few hours, I got my first peek up towards Luinne Bheinn and the Mam Barrisdale - my intended base for the next night or two. This was my first time in Knoydart and so far it was living up to its reputation as rough, remote, and staggeringly beautiful. A golden plover (I think) welcomed me into the bay.

I headed over the bridge and off up towards the bealach. Stopping at a wee burn I stripped right down and cooled myself off in the lovely cold water - this was hot work with a big pack.

Back towards Barrisdale from the path to the Mam Barrisdale

Arriving at the bealach at 1.30 (4h from the car), I pitched my tent, dumped most of my gear, had a quick sandwich and headed across the boggy terrain towards Stob a' Chearcaill, eventually gaining a distincter ridge, scrambling up some crags and traversing up to the low point of the ridge between Stob a' Chearcaill and pt.849.

Meall Buidhe from the Mam Barrisdale 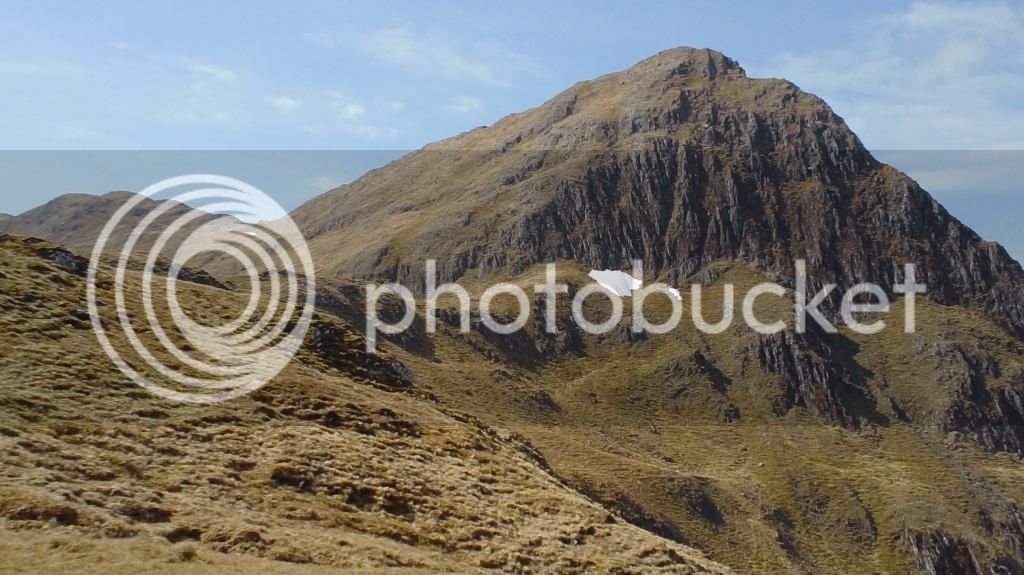 Gaining the ridge felt like an achievement - the legs starting to feel it now! Heading towards the looming bulk of Ladhar Bheinn, I began to appreciate what a huge undertaking climbing this hill is - it's huge! Slowly but surely, after many ups and downs, the final approach to the summit came into view and, stopping to fill up my bottle with snow, I clambered up the rocky slopes and onto the summit, heading over to to the broken trig point, finding a spot on the lee side of the hill with a sea view and proceeding to lie down and drink it all in. 6.5h car to summit.

Barrisdale bay from the ridge

Down to Loch Nevis and Inverie

Loch Hourn and Ben Sgritheall from the summit

Back along the ridge, Luinne Bheinn and Sgurr na Ciche in the distance

After a good hour on the summit (I may have dropped off for a bit of a nap...) I reluctantly left this incredible spot and headed down the the tent, the re-ascents on the ridge feeling painful, the final descent motivated by the thought of the chicken jalfrezi and rice waiting for me in the tent. After a 9.5h day, 2100m ascent and 24km walking, I slipped off my boots, hung up my socks to dry, ate my dinner, jumped in the sleeping bag, and popped off to sleep.

After a windy night I reluctantly got out of the sleeping bag, ate some pre-cooked bacon and beans in tomato sauce for breakfast, downed a coffee, and left the tent at 8am to a slightly different looking day. I had felt the wind picking up over night and despite being on the lee side of the pass my tent was still getting blown to bits. I worried slightly that it might have blown away by the time I got back from today's hills! Oh well, good excuse to buy some new gear.

I headed East away from the bealach along a muddy path, joining a line of fence posts which I followed up between the crags around to the South West side of Luinne Bheinn, heading up steep ground to the wind blasted summit, arriving there at 9am and promptly heading towards the East top to get a bit of shelter. The wind was strong, there were high clouds (though patches of sunshine) but I could see the dark skies to the East rolling over the Loch Quoich hills and slowly closing in on me. I hastily headed down the SE ridge of Luinne Bheinn, turning SW to head along the top of Coire Odhar towards the bulk of Meall Buidhe up ahead.

Meall Buidhe from the tent 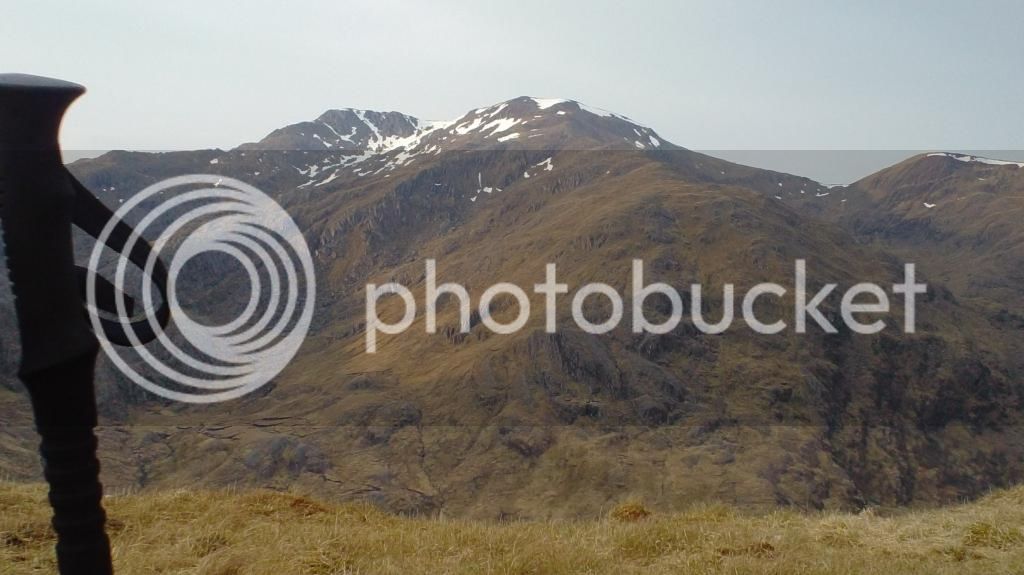 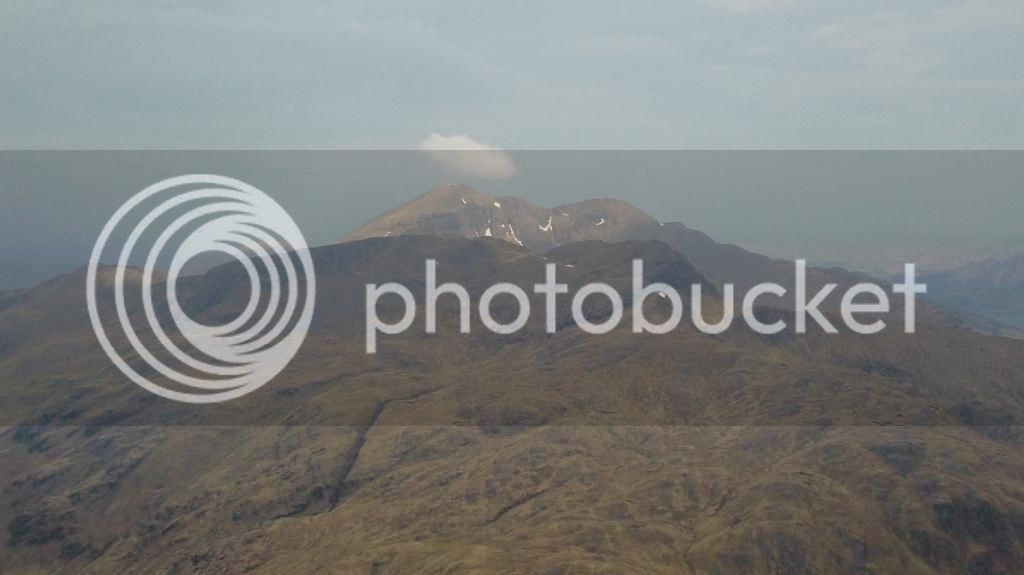 After startling a pair of Ptarmigan, I dumped the sack at the Bealach Ile Coire and headed up the steep rocky ridge onto Meall Buidhe, getting really buffeted by the wind by the time I reached the top. The weather was really closing in from the East - I didn't spend more than 10mins on the summit, knowing I had a long way to go yet today. 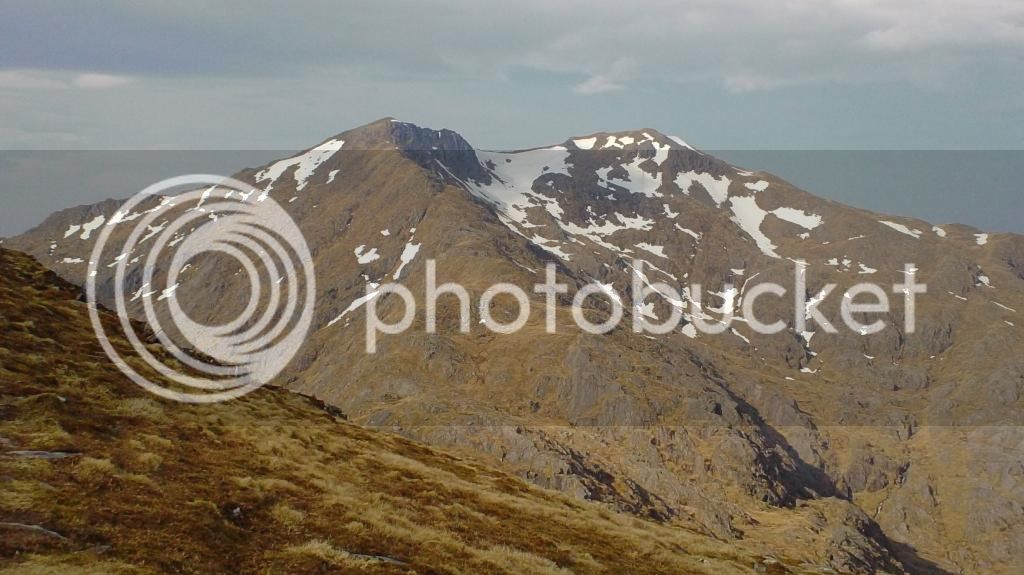 I headed back to the bealach, and having picked out a route from above avoiding a re-ascent of Luinne Bheinn and to get a bit of respite from the now really strong wind, I descended into the coire towards two lochans. Passing a few deer I arrived at the lochans to find they're sandy bottomed - this would have been a great place to stop for a swim yesterday, but, maybe not today...!

Beyond the lochans I clambered up a grassy ramp, towards the top traversing left along the top of some crags, scrambling over a few rocky patches, and arriving back on the fence post path which I followed back to the Mam Barrisdale where my tent was, incredibly, still in one piece!

Leaving the bealach at 12.30 after packing up my gear I started the long walk back to Kinlochhourn, heavy pack once more. Passing Barrisdale I trundled past a bemused bunch of stags, antlers not yet fully formed, following the track made of seashells, and arriving at the start of the footpath back to Kinlochhourn, really feeling it on the feet now.

Back on the coast

I headed back along the path, having forgotten how much ascent and descent it involved. This path is a killer. About halfway, I stopped for some tasty Ainsley Harriot sundried tomato and garlic cous cous to motivate me for the last few miles. The only problem was the dreadful aftertaste it left for the remaining couple of hours!

Oh herro you too 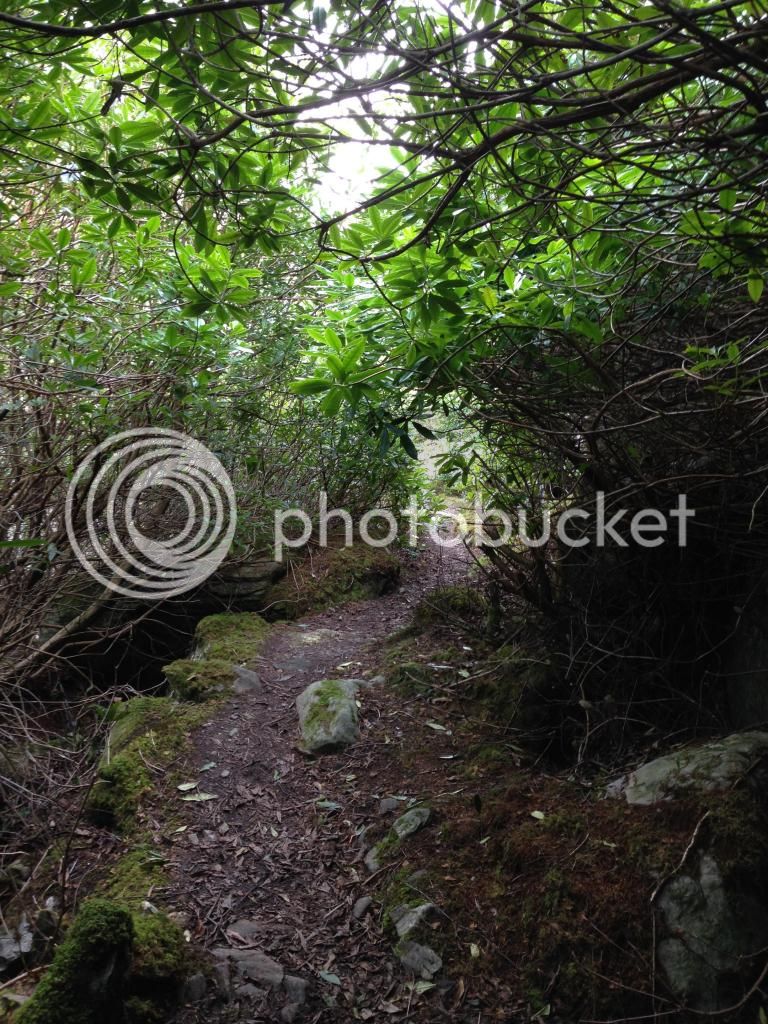 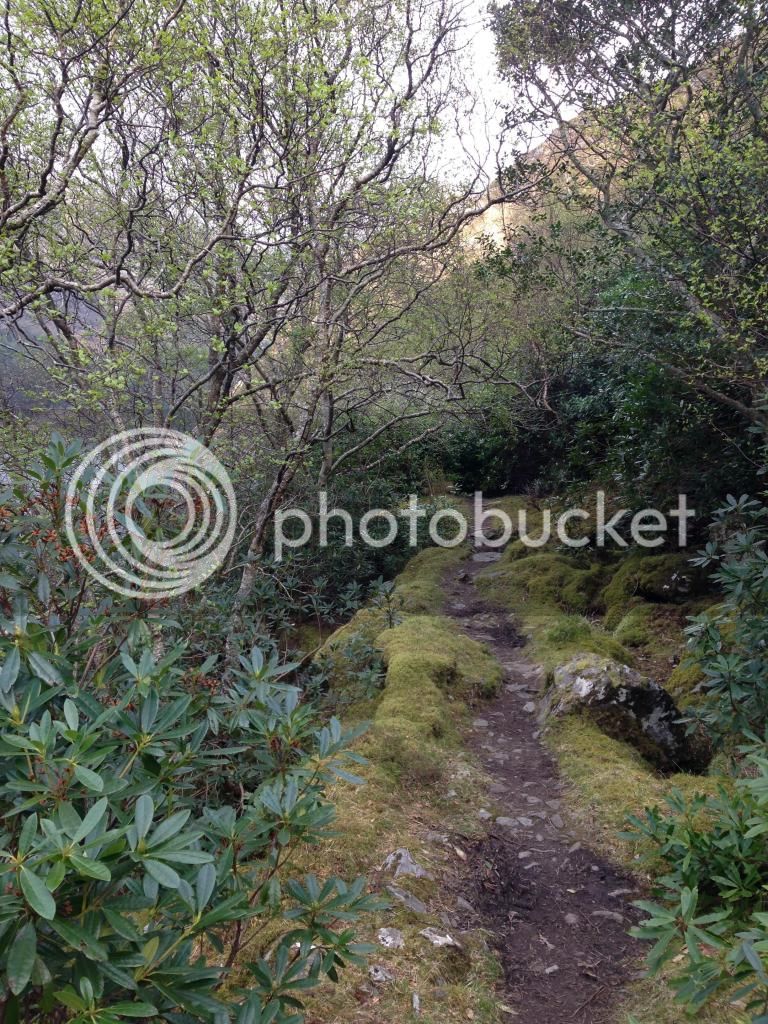 Back on the road

On the final bit, some more bemused deer watched me stumble past with little interest 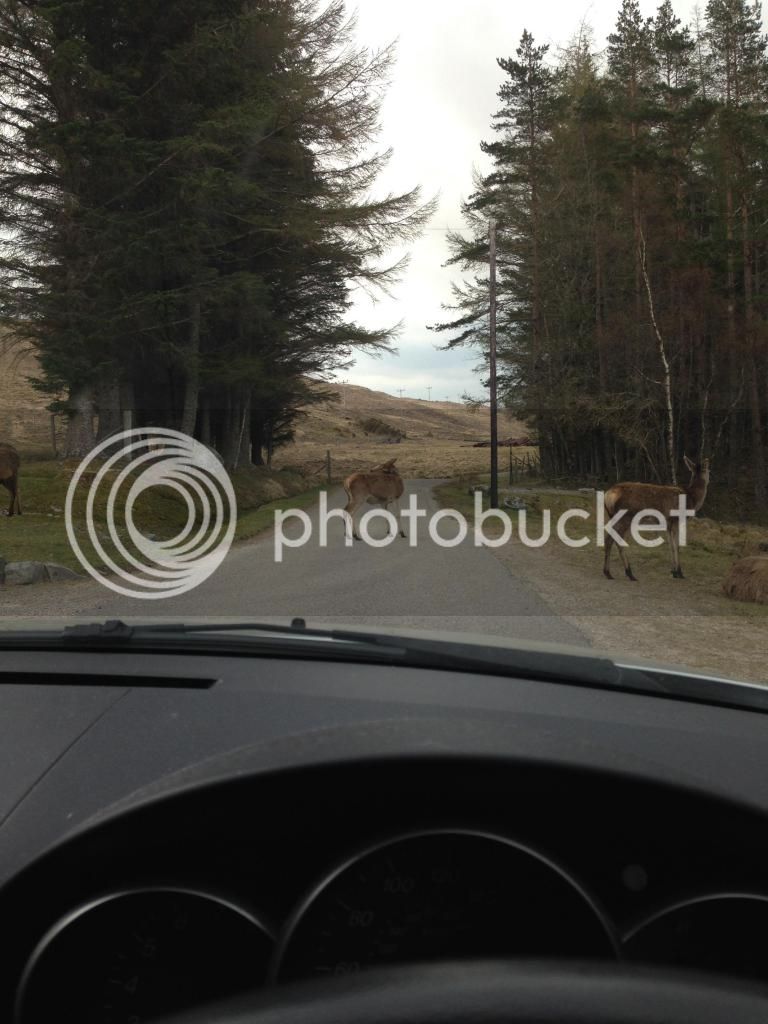 Arriving back at the carpark just after 5 I found it almost empty - a stark contrast to the previous morning.

So all in all, a long and knackering walk, but an absolutely awesome experience. Lucky with the weather and the snow cover (even though I carried my cramps and axe in they were just wasted weight), experienced what is now one of my favourite spots in all of the highlands, spent a night on the hill, saw some great wildlife, and felt exhilarated. Lucky me eh.


New_Route(3).gpx Open full screen  NB: Walkhighlands is not responsible for the accuracy of gpx files in users posts
Click to mark this as a great report. Register or Login free to be able to rate and comment on reports (as well as access 1:25000 mapping).


Walls, Screes, Aretes and 2 'last munros' in a week

A stravaig up the Cape Wrath Trail

What a day to be out in the hills

Nearly blown to bits on the isle of Culebra

Cluanie to the Saddle - I must be crazy