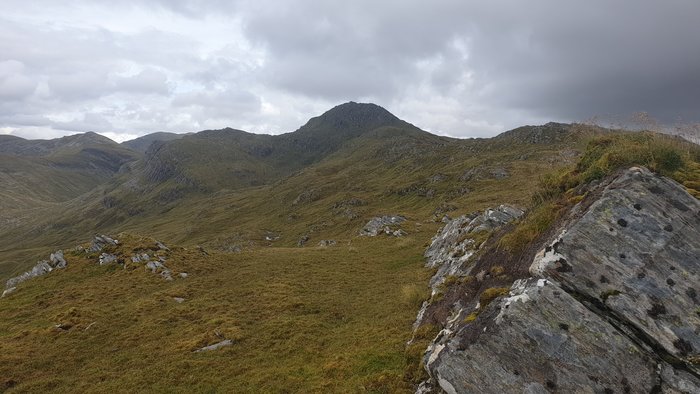 Looking back up to Sheasgaich on the ridge descent.

Coming down and just off the top of Sheasgaich I got a good break as the murk lifted a little so I could see the Sail Rhiabhach ridge. I still couldn't see a track and it was a little intimidating to venture on to the ridge where I thought the route would go, but after just 20 metres or so I could see a modestly worn path in the grassy edge of the ridge ahead of me. The cloud lifted even more and I could see the whole ridge ahead, looking straightforward and nice 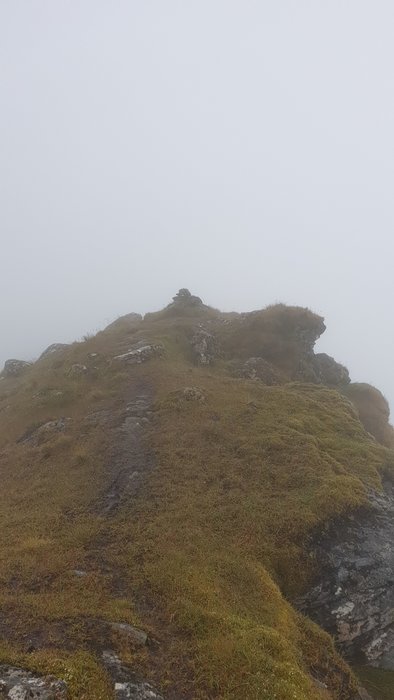 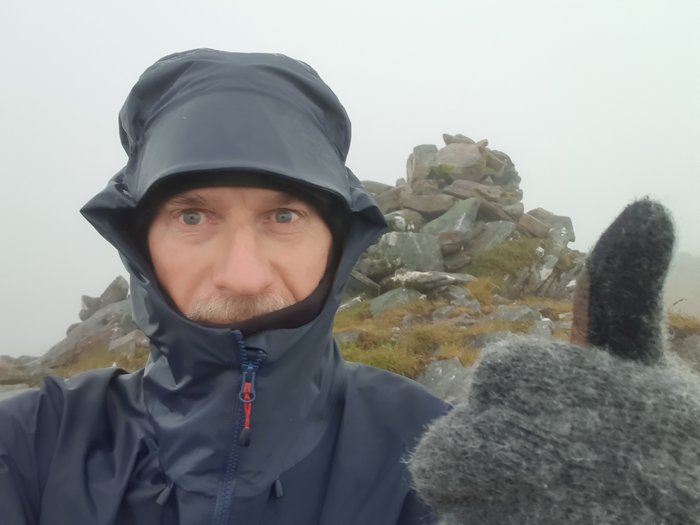 Cute sign helpfully pointing the way up the pathless grassy slope to the bealach between the two peaks.

A steeper and rougher section.

Just out of Attadale Gardens looking back.

Apologies for the messy mix of photos and narrative. I'm still getting used to submitting a walk report. Am trying to edit and improve it. Hope it helps anyway 🙄.

Having finally managed to make a contribution by writing my first walk report a week ago after 268 Munros for Tom a Choinich and Toll Creagach (so far no likes and no comments, sheesh, WH is a tough audience 😳) here is my second contribution. I'm partly spurred on after I stumbled across the table of number of Walk Reports for each Munro on the WH site. Poor old Lurg Mhor and Bidein a Choire Sheasgaich are rock bottom of the pile. Everybody loves an underdog so here I am doing my bit.

You can see why there aren't a lot of reports for these hills: the c 14 km track in and out means that only multi-day adventurers and Munro Baggers (and probably mainly only those nearing the magical 282 total) will take up this challenge.

I was camping in Cannich, an hour and 40 minutes (beautiful) drive away so set off early. At 8:00 a.m. I mounted my bike in Attadale gardens and set off along the lovely smooth tarmac. When I had given my proposed route to my wife (Basecamp Chief) I had struggled to estimate accurate timings for the track because I wasn't sure how rough it would be. Having now biked it I would say the track is good. There's about 1.5 km of tarmac through the gardens and the rest is nearly all decent hard-pack. One of the worst bits is for about a kilometre after you exit the gardens where potholes have been filled in with loose hardcore but even that is OK.

There is a sustained uphill section straight out of Attadale Gardens, roughly 7 km or so. I rode as much of this as I could but also pushed a lot. I tried to take it sensibly but it was hard work at times. At the top of the "hill" I met two friendly cheerful guys carrying big packs who had been camping and hiking for the weekend and were heading home. From there it was an easy, if cautious for me, run down to Bendronaig Lodge. I left my bike and helmet in the heather just after the bridge and right turn shortly after the lodge. 2 hours 10 minutes to that point. Then I carried on along to Loch Calavie, following the WH route.

There's a little sign pointing the way up the hill from the lochside. I couldn't find a path and pathless grassy slopes aren't my favourite but it wasn't too bad and after what felt like only minimal grinding upwards I reached the bealach between the two hills.

The weather closed in at the Bealach as I turned right and started ascending Lurg Mhor. It was pretty uncomfortable to be honest, I was in full rain gear and visibility was poor. At one point I saw two people appear out of the mist and cloud about 50 metres away. We waved at each other and then carried on on our different routes. A bit sad. Navigation was tricky in the clag and I was really glad I had the WH gpx file on my GPS to supplement my map and compass. After a couple of steeper sections and some easy scrambling I got to the top and put more warm gear on.

After not exactly retracing my steps to the bealach (the visibility! 😬😬) I started ascending Sheasgaich and soon ran into the two people I had seen earlier in the mist. They were now descending from Sheasgaich. It was a man and a woman and we chatted for a couple of minutes. They'd decided to descend by retracing their route up to the bealach from the loch. The climb to Sheasgaich was straightforward with a couple of easy and short hands-on sections. Nothing to worry about. Visibility was still poor and I couldn't see any sign of the turn for the descent route down Sail Riabhach ridge although I looked carefully as I ascended.

Coming off the top there was a break in the cloud and I could briefly see the ridge but no obvious path. I tentatively explored easy terrain where I thought the ridge route would start and after 20 metres or so found a bit of a path in the grassy slope set back from the steep edge of the ridge. I headed down the ridge and was rewarded with the clouds lifting and good visibility. After a while I could even look back and see the top if Sheasgaich. Result.

I really enjoyed the ridge descent. It's just pleasant tootling down a nice slope with (finally 😀) lovely views. It's got fairly steep drops to the sides but felt broad and unthreatening to me. I lost the path a couple of times but in the now-excellent VISIBILITY the general way was clear.

The final grassy, steepish, descent back to the track.

At the track I had a bit of a moment wondering if I'd ever find my bike again 🤭 but got there in the end 6.5 hours after leaving it in the heather. Then I had a nice extra sit down enjoying the views, more sandwiches and knowing I had a pretty straightforward trip back to the car. Going back is a lot easier than coming in, after some initial downhill/flat and then what seemed like much less pushing i was back at the high point of the track in, where I'd met the two cheery guys with backpacks. I put on a bit more gear for the downhill run and thoroughly enjoyed freewheeling back to Attadale. Stopped for a few minutes to chat with a man and a woman carrying rods and nets: they'd caught a couple of brown trout. Nice people.

I just so enjoyed the little 1.5 km section through the Attadale gardens area at the end, rolling along on my bike knowing my car (and coffee and nice food) was just a few minutes away. I felt like I'd had another challenging at times, but thoroughly enjoyable day in the hills. Total time was 9 hours 50 minutes, never pushing it, just carefully making progress.

Thank you Lurg Mhor and Bidein a Choire Sheasgaich 😀😀😀👍👍👍
Click to mark this as a great report. Register or Login free to be able to rate and comment on reports (as well as access 1:25000 mapping).


Tom a Choinich & Toll Creagach. Clockwise to avoid the rain.