Normal service is resumed: getting wet in Glen Carron

Well, you don't get to walk them all in brilliant sunshine

- after a spectacular start to a week with a family group up at Lochcarron in early June, when I DID actually get to walk both the two Achnashellach Munros and Beinn Alligin in brilliant sunshine on the Sunday and Monday respectively, the Weather had inevitably Turned by the Wednesday and the forecast was for patchy drizzle for most of the day

. Still, with numerous Munros sitting temptingly on the doorstep, I was determined to get out and get something else bagged, so I thought I'd have a look at the two Munros that sit east of Craig in Glen Carron, Sgurr Choinnich and Sgurr a' Chaorachain.
Is it just me, or is locating the right car park often the hardest bit of a walk

? I do seem to have a knack of parking needlessly far away, and today was no exception: I missed the sharp left turn for the forestry car park just at the north edge of Craig (to be fair, it looks like someone's driveway when driving up from the south, although it would be easier to spot if approaching from the north), and I ended up parking in a lay-by a good 700 metres further up the A890 ... ah well, hopefully I'll remember this if and when I ever come back to do Maoile Lunndaidh, which has the same starting point

!
It was a quick enough stoat back down the roadside to Craig, however, where the route proper leaves the east side of the A890 to cross the railway line at a level crossing, then heads northeast to cross the River Carron at a wide bridge, followed by an excellent forestry track that heads pleasantly but relentlessly uphill, on the eastern side of the deep gorge of the Allt a' Chonais river. Soon enough, the former Munro (now demoted to Corbett) Sgurr nan Ceannaichean was looking impressive in the distance, just lifting its summit out of the Clag: Sgurr nan Ceannaichean is a good-looking hill, and it knows it: in fact it's a bit of a show-off, to be frank, and it was flexing its buttresses impressively as I got closer. Ah well, if you've got it, flaunt it, I suppose... Probably the best view of the day, so we may as well have it twice; here's another shot of those buttresses: 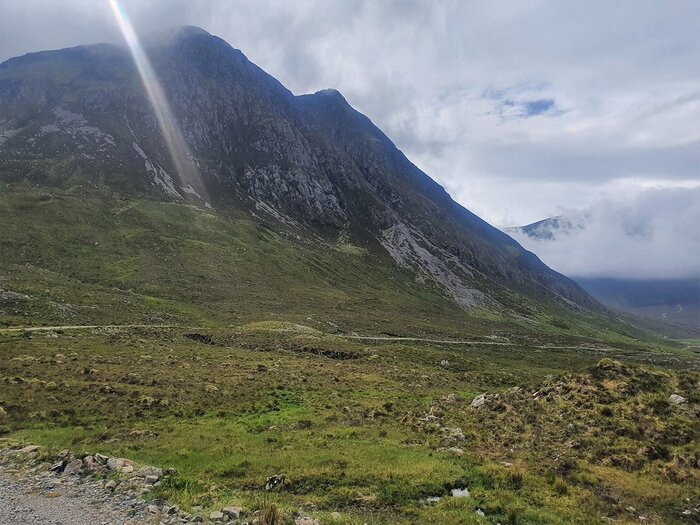 After passing through a high forestry gate, the forestry track eventually bends left to head due east towards distant Maoile Lunndaidh, and the target Munros were finally looming hazily through the Clag ahead. There was a fairly sizeable watercourse in the way, however, namely the Allt a' Chonais river, although thankfully it gets quickly less intimidating as you get higher up it. Before long, I came to a very shoogly wire bridge with a single rope available for balance

. You Use This Bridge At Your Own Risk - um no thanks. I decided not to risk this, but just to head on up the track for a wee bit to a cairned path on the right, which heads off south to cross the Allt a' Chonais at a shallow ford - just about possible with dry feet using boulders as stepping stones, even on a relatively dreich day like this.
Heading for the Allt a' Chonais crossing, with Sgurr Choinnich's summit briefly Clag-free: There was another derelict wire bridge just west of the ford, with the wire now hanging slack and no use to anyone, but still entertainingly signed "You Use This Bridge At Your Own Risk"... Once across the Allt a' Chonais, the path heads southwest along the Allt Leathad an Tobhair, which is one of the two tributaries of the Allt a' Chonais, to eventually reach the Bealach Bhearnais at the foot of Sgurr Choinnich's long west ridge.
At this stage, the cloud base lifted temporarily to give me brief but impressive views of Sgurr Choinnich, and I allowed myself to get my hopes up that the day might be better than forecast ... sadly it was only a brief respite, though, and the Clag soon descended again with a vengeance.
Heading up to the Bealach Bhearnais with Sgurr Choinnich impressive to the left: As I approached the Bealach Bhearnais, I met a French student from Bordeaux, who was one of only three other people I met all day (of which, more later). He was doing a fairly ambitious long-distance low-level route using a series of bothies, and he'd been having a great time in the last few days' good weather, by the sounds of it. I wished him luck and headed on up to the Bealach Varnish - no, sorry, Bhearnais - where there was a nice view back down the glen of the Allt Leathad an Tobhair. At the start of the ridge now, having picked up a path again, and crossing a delapidated old drystane dyke with Sgurr Choinnich's upper west ridge looming impressively beyond it

. The Clag had descended with a vengeance now, however, and it had started to rain steadily Sgurr Choinnich's west ridge proved to be entertainingly rocky throughout without ever becoming actually difficult, and on the whole it was a delight, even in the Clag and the rain

. Higher up, there was another brief break in the Clag, providing an impressive distant view of Sgurr nan Ceannaichean again: It wasn't much further to Sgurr Choinnich's summit cairn, which stands at the edge of a big drop.
The inevitable Summit Selfie: although fairly drookit by now, I was well chuffed to be up here today, as you can see! 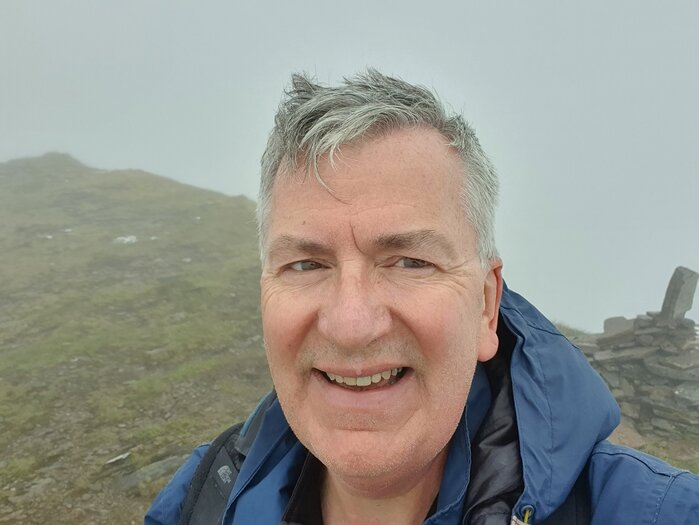 Sgurr Choinnich's summit cairn, mercifully unenhanced by my drookit face this time. There was a delicious sense of airiness and exposure, even in today's Clag: Although still good fun, the next section of ridge linking the two Munros (still enjoyably rocky, but still easy enough with a good path all the way) proved to be the wettest part of the day. The rain wasn't mucking about now, and needless to say there are no further photos until we magically find ourselves at Sgurr a' Chaorachain's summit windshelter, surrounding the remnants of its trig point: Although this is the second and higher of the two Munros, and the one which is also a Marilyn (Sgurr Choinnich doesn't quite qualify as a Marilyn because it doesn't quite have 150 metres of descent and re-ascent from the higher Sgurr a' Chaorachain), Chaorachain isn't quite such a fine peak as Sgurr Choinnich, being a more rounded beast although still enjoyable enough.
Me at Sgurr a' Chaorachain summit, looking even more drookit by now, and perhaps a tad less enthusiastic The descent from here is pathless, but straightforward enough, heading down due north for a good few hundred metres down Chaorachain's grassy north ridge, before turning leftwards for a steeper (though still grassy) descent back down to the glen of the lower Pollan Buidhe. There was a tantalising glimpse of another craggy peak through the Clag on descent - I'd taken this to be that eternal show-off Sgurr nan Ceannaichean yet again, but on looking at the map again just now, I think it was actually Sgurr Choinnich: A good view of the track on descent, with some lovely meanders on the Pollan Buidhe: Although pathless, it was an easy enough romp back down to the glen and across the Pollan Buidhe, just before it meets the Allt Leathad an Tobhar to form the Allt a' Chonais. On the north side of the Pollan Buidhe, I rejoined that excellent forestry track that eventually leads all the way back down to Craig.
I hadn't met a single other soul on the hills themselves, but only a hundred metres or so down the forestry track from the Pollan Buidhe crossing, two guys about my age passed me on mountain bikes. Who looked strangely familiar. Yes, all three of us did a quick double take, and I realised that I was in the presence of two fellow members of the Bearsden Choir bass section, who had by sheer coincidence decided to bag Maoile Lunndaidh on the same day

. We stopped for a good natter before they cycled off merrily down the track, leaving me to plod away rather more slowly on foot...
Ah well, at least the Clag had eventually relented and started to lift a bit, giving some nice distant views.
This was the view north-west on the initial descent, with the foothills of Beinn Liath Mhor I think visible in the distance, although its summit wasn't quite in view yet: A bit lower down, I did get a brief but impressive view of all three Coire Lair hills through the Clag: Beinn Liath Mhor on the right, then its fellow Munro Sgurr Ruadh in the middle, and finally the very impressive Corbett Fuar Tholl. Looking almost due west a bit further down the track, with an impressively knobbly hill away in the distance - possibly An Ruadh Stac A grand day out, despite the soaking

It's big & grey! It's red & pointy! The Achnashellach Munros

The One and Only Ladhar Bheinn

Snoop Dogg, in the bag at last!

Fionn Bheinn - maybe not very pointy, but what a viewpoint!