I've gotten well behind with my Walk Reports this year - I've been too busy walking, which has been nice

! Anyway, this one is from back at the beginning of August. For once, inspiration has utterly failed me for a painfully punning title, so I'm just going for "The Barns of Bynack More" - which sounds rather like an ancient Scots fiddle tune (and may well be one for all I know! - a stately Strathspey, I suspect it would be).
I had the Sunday 1st August free for a day-trip walk, and Bynack More was one of the few day-trippable hills that I still had to do, so today would be the day. The forecast was slightly iffy, but set to improve as the day went on. If I remember correctly, I think the www.mwis.org.uk forecast gave a fifty per cent chance of cloud-free Munros in the Cairngorms - so, was I feeling lucky

?
I got a reasonably early (but not ridiculous) start, and arrived at the parking area just beyond Glenmore Lodge in good time to nab a prime roadside spot. This is a high start, providing a good leg up at the start of the route, which should hopefully make it not too strenuous a day, with less than 800 metres of ascent - not at all bad for one of the 'Gorms

!
Although the start of the route on the ongoing track east from Glenmore Lodge was already busy with walkers and cyclists, it was very scenic from the outset, travelling through some lovely Scots pinewoods. Before long I arrived at the rather lovely (although mobbed) An Lochan Uaine - after some strategic camera angling, I managed to get this shot that left out most of the crowds. It is a very bonny spot, and as its name suggests, its waters really are strikingly green - said to be due to the presence of Fairies, I believe

. Perhaps supporting these supernatural associations is the odd fact that it has no obvious outlet stream. 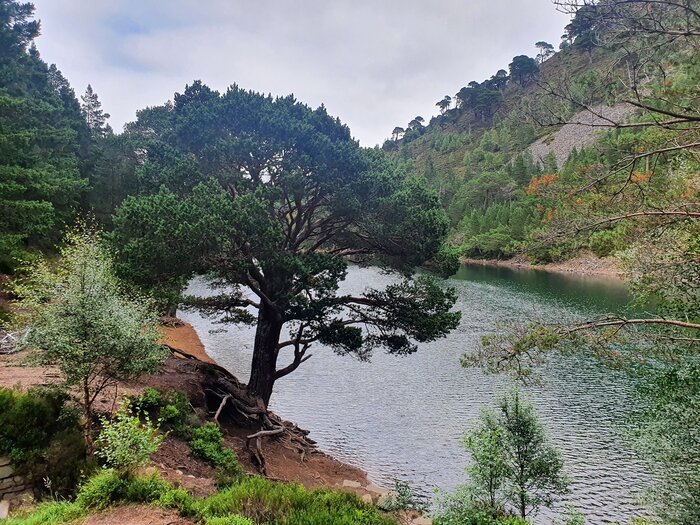 A wee bit further down the track, I exited the pinewoods to arrive at the signed junction where the Lairig an Laoigh heads right: the leftward fork leads to Ryvoan Bothy, and eventually onwards to Nethybridge, as the sign says. 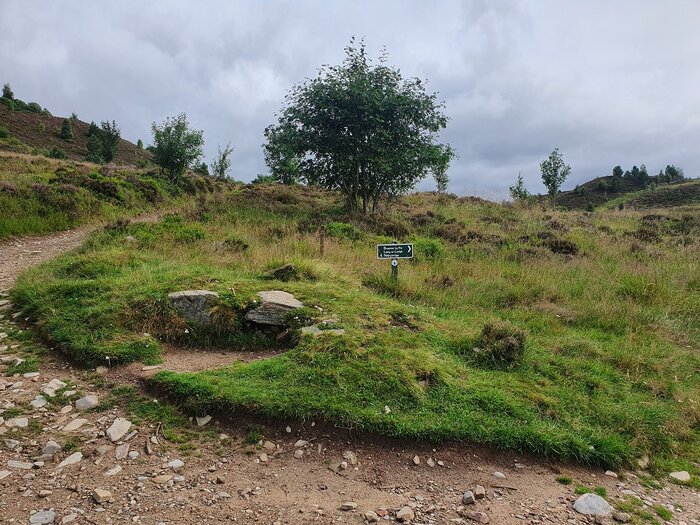 As its name suggests, the Lairig an Laoigh - the Pass of the Calves - is an ancient Cairngorm drovers' route, and (like the more famous Lairig Ghru) one of the main historical routes through the Cairngorm massif. The approach to Bynack More follows its western side pretty much to its high point on the Munro's northern flanks.
A bit beyond the track junction: I think the minor prominence to the right must be Stac na h-Iolaire which is a northern outlier on Cairn Gorm's north ridge. 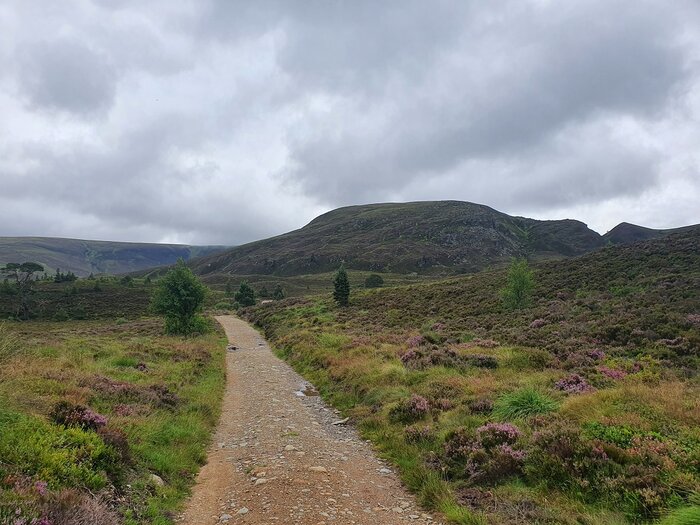 A wee bit further on, I came to the well-built bridge over the River Nethy: just as well it's here, too, since this is a substantial waterway. 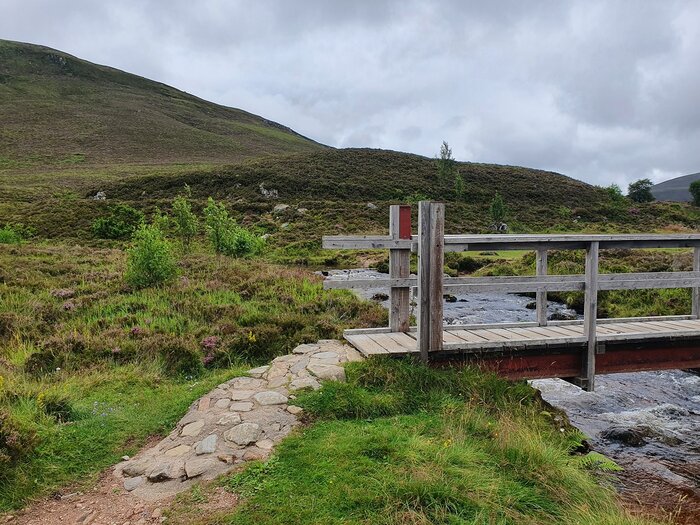 From the other side of the bridge, there was a grand view south down Strath Nethy, although there was still a lot of Clag about at this early stage of the day. 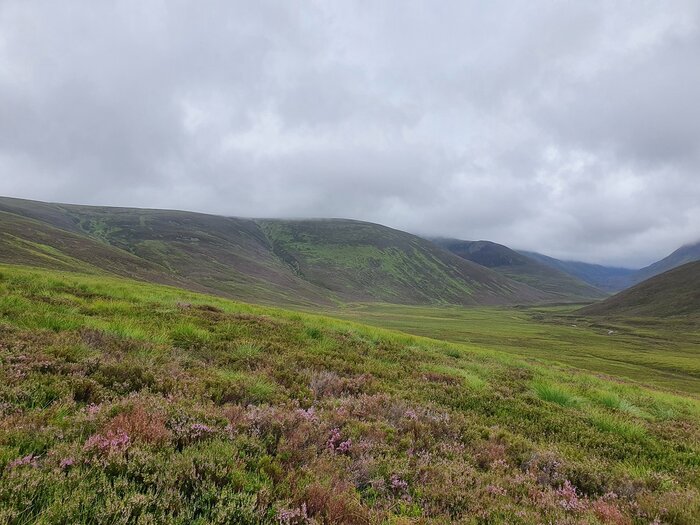 As usual when walking in these parts, I found myself musing about how different the Cairngorms are from the West Coast hills. Much drier underfoot, for a start, and sporting a lot of lovely alpine flora, although lacking the West Coast's impressive ruggedness. It's Big Country out here all the same, with big, impressive scenery, perhaps most impressive when viewed from a distance, on the whole. There was a fine vista over the Wide Dominions to the north, with the Bonny Blooming Heather putting on a very fine display 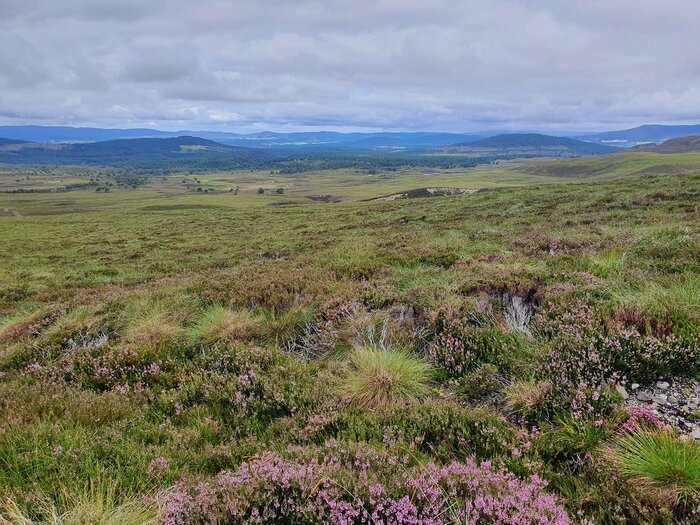 Looking back westwards from the far side of the River Nethy bridge, with the Corbett Meall a' Bhuachaille prominent in the middle distance: 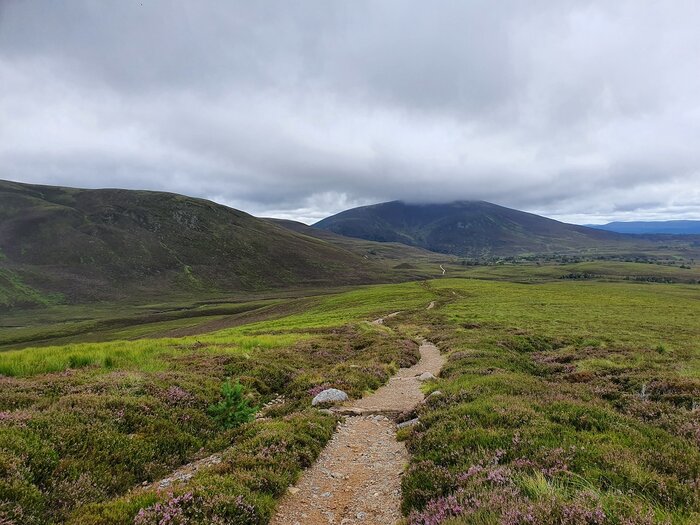 Another pleasing view of Meall a' Bhuachaille from the start of the ascent eastwards towards the high point of the Lairig an Laoidh: 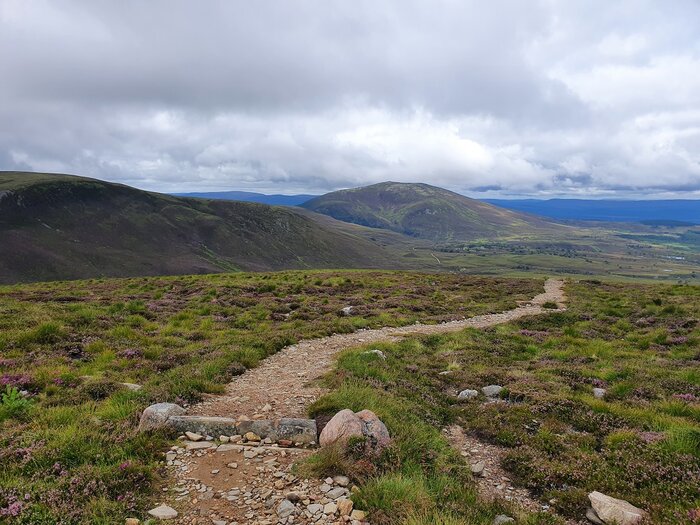 Just short of the Lairig's high point, the obvious path leading to Bynack More branches off right at a small cairn: 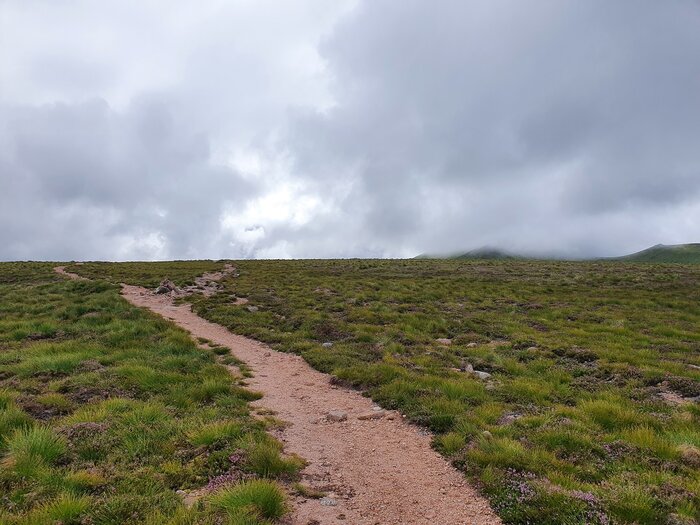 A short distance further on, and Bynack "Surprisingly Pointy" More had come into view at last; the smaller peak to its right is of course its lower Top, Bynack Beg. 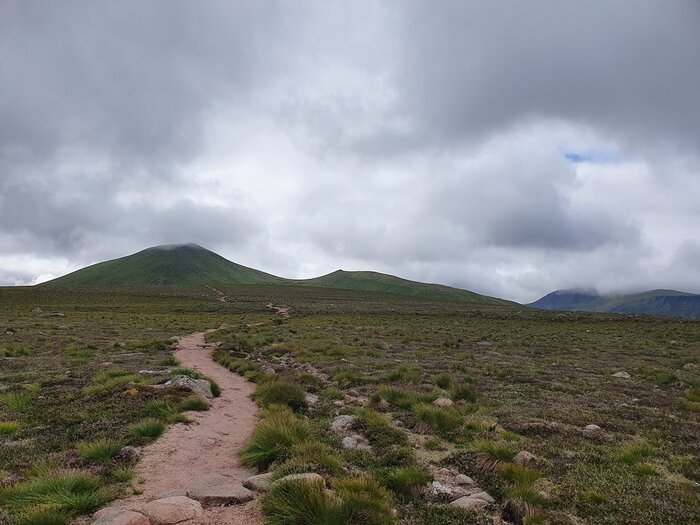 On the ongoing ascent, the eastern cliffs of the Cairngorm massif were starting to look seriously impressive, looking back westwards across Strath Nethy: 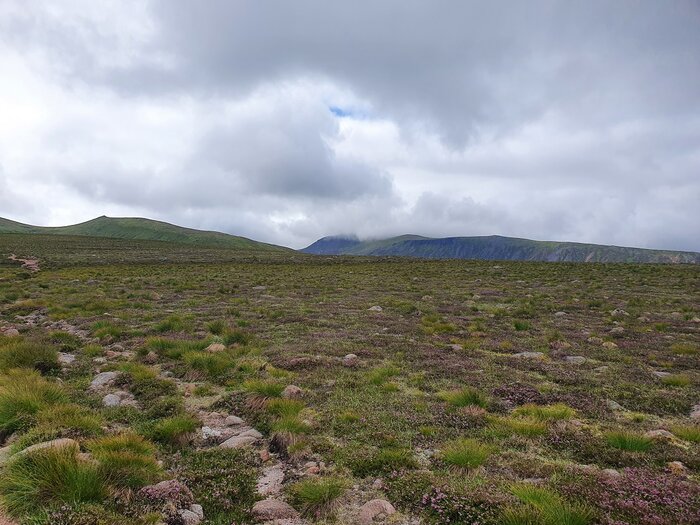 The Clag was lifting steadily, as per forecast - but would it lift quickly enough to give me any summit view 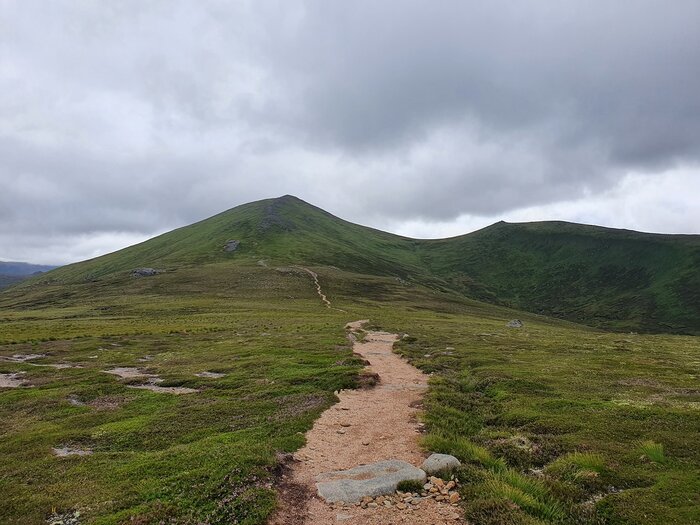 I got to the summit environs a bit quicker than expected, but sadly the Munro was still resolutely refusing to lift its head from the Clag... so, somewhat uncharacteristically, I bypassed the summit cairn for the time being and headed on south-eastwards towards what was arguably the main attraction. WE WERE PROMISED BARNS! SHOW ME THE BARNS!
Oh, on you go then... 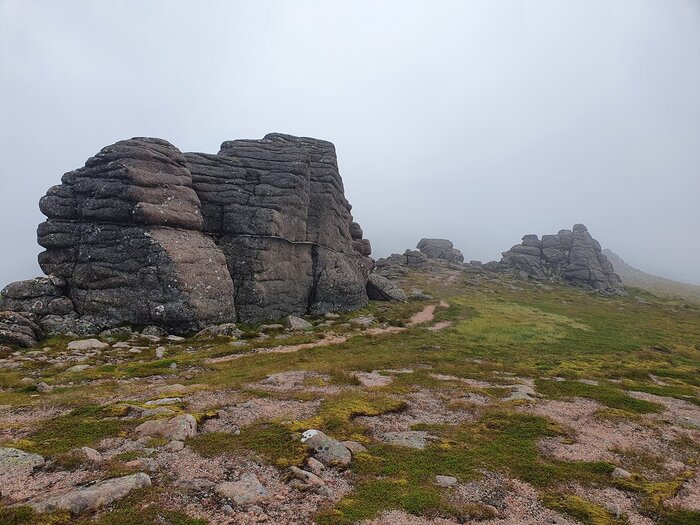 The "Barns of Bynack" are of course an extremely impressive series of rocky tors that run down the hill's southeastern flanks from just beyond the summit. These ones looming impressively through the Clag in the photo above are just the "Little Barns". The Big Barns are a wee bit further on to the south-east, and I was delighted to find them well below the cloudline: A closer view of the Big Barns, with the deep defile of the south-eastern bit of the Lairig an Laoigh visible beyond them, running between Bynack More and its Corbett neighbour, Creag Mhor: 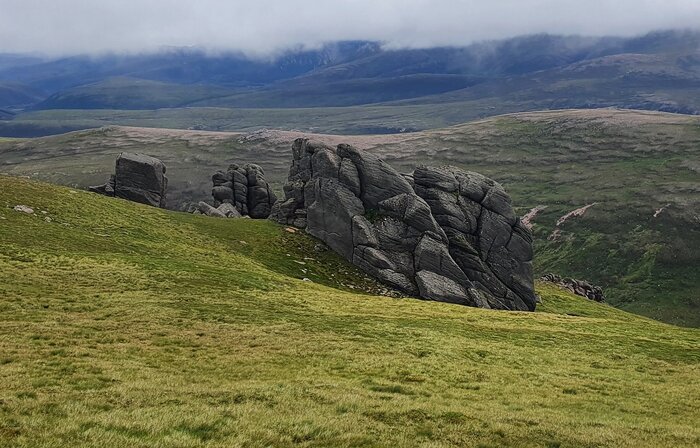 I didn't go right up to the Big Barns: tempting as they look, it is by all accounts a rather hard scramble to get on top of them, and probably beyond my abilities! I therefore just backtracked westwards towards the Munro's summit cairn, which was coming in and out of the Clag by now - might I just catch a summit view after all

?
At yer actual Bynack More Summit now, with a big red cairn and all, and yes - a bit of a view too 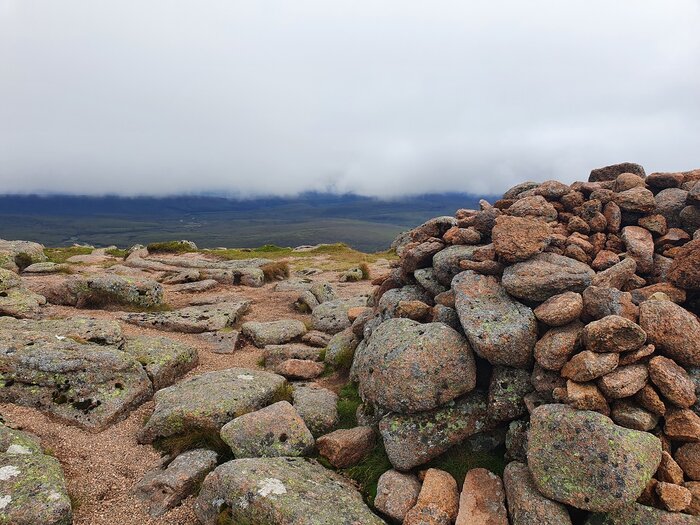 Looking approximately WNW, with the eastern cliffs of the Cairngorm massif very impressive indeed when viewed from up here, but poor Meall a' Bhuachaille now looking rather diminutive: 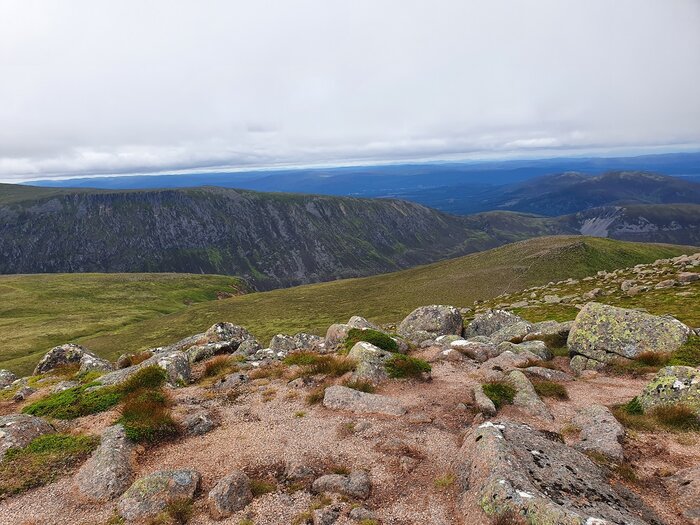 Many a Barn in view now that the Clag was lifting! 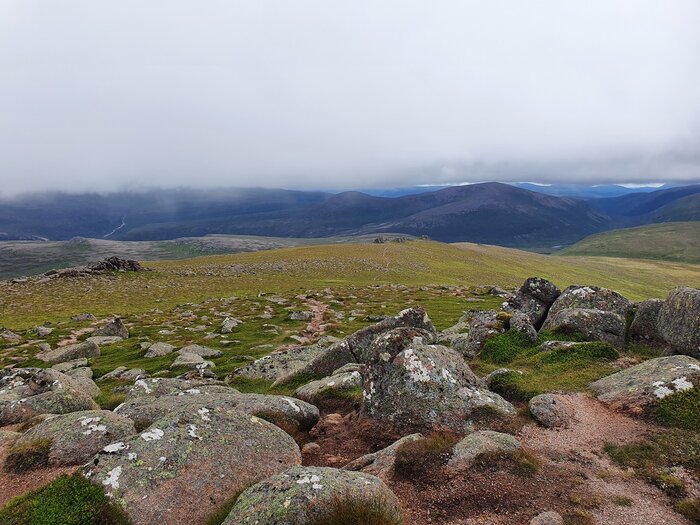 Another stirring view of the eastern cliffs of Cairn Gorm across Strath Nethy. That's very much the Gorms for you, I suppose - you walk for ages across rather flat and uninteresting terrain, then suddenly you come to a sheer 300-foot drop 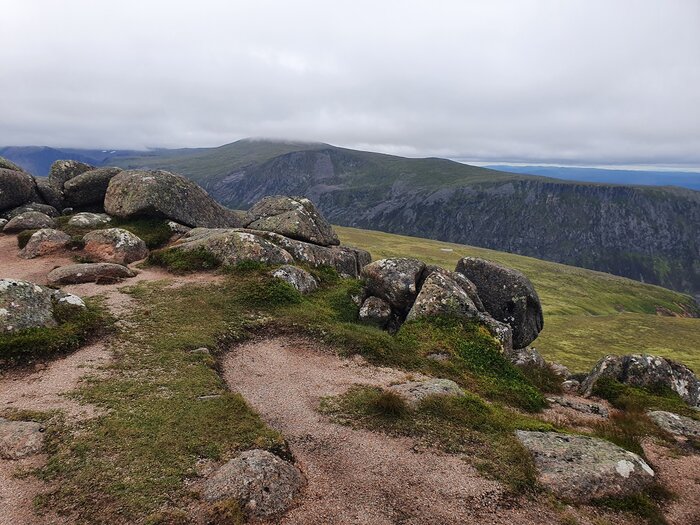 Thankfully Bynack More doesn't sport any such sheer cliffs, although it's an distinctive enough hill and really rather a distinguished summit for such straightforward walking. It really does sport some seriously impressive rocky tors and various other geomorphological thingamajigs and twiddly bits, including this somewhat obscene-looking outcrop just below the summit: 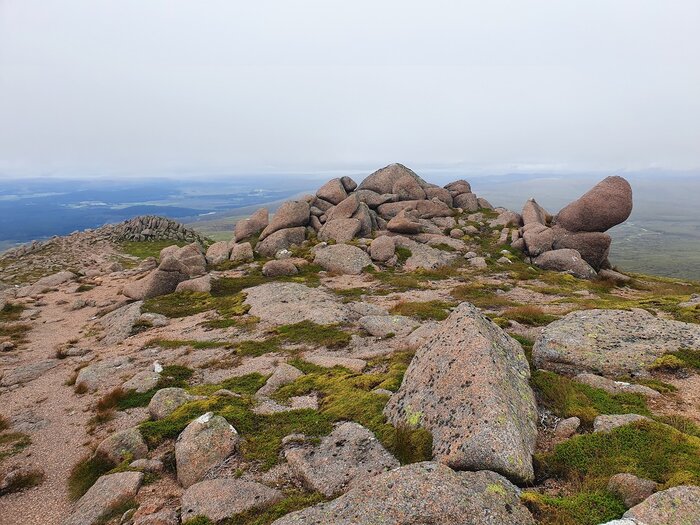 Enough Barns, now, already! Time to get back down. It was a scenic and straightforward stoat back to the car park, and the Clag had lifted a lot by now, giving a stirring view southwards down Strath Nethy on the way home: 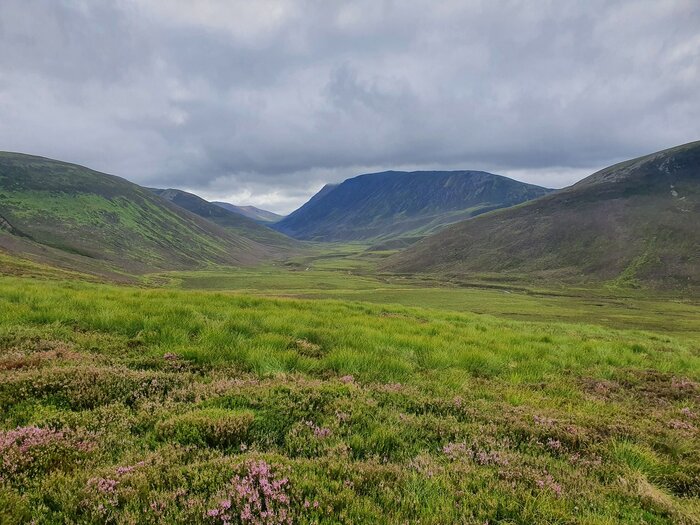 Another grand day oot in the Gorms, on the whole


If this is Oireabhal, does that make me Keith Harris?