Snoop Dogg, in the bag at last!

Stob a' Choin is the "Stub of the Dog" - not of course to be confused with various other very similarly named mountains in the vicinity, such as Beinn a' Choin, Beinn a' Chroin or Stuc a' Chroin

- those early cartographers have a lot to answer for! It seems a rather uninspiring name for a fine wee hill, and for reasons that were never entirely clear, it seems to have forever morphed for me into "Snoop Dogg", after I'd started calling it that to myself while bagging the adjacent Graham, Stob Breac, back in Autumn 2020. Anyway, it's an unexpectedly pointy and distinguished Corbett, and given its proximity to Glasgow, I promised myself to come back and try to bag it ere long. The unseasonal spell of lovely weather at the end of March seemed like the perfect opportunity, so off I went

our_route.gpx Open full screen  NB: Walkhighlands is not responsible for the accuracy of gpx files in users posts
The target hill was clearly visible from the start of the route at the big walkers' car park at Inverlochlarig, and it was looking a tad steep The Doggfather was looking no less steep when viewed through the trees a bit further down the track, either... I headed on undeterred toward Inverlochlarig Farm. The sun was shining, and this did look like one fine wee hill, all right. After crossing the farmyard at Inverlochlarig (venison on sale; I was tempted but didn't stop - another day, perhaps!), there is a good track that continues westward down the north side of the River Larig, reaching a gated bridge over the river before long. Once across the bridge, there is no track or path, and you just have to choose your own way up. My Corbetts guide (it was the Cicerone one, I think) recommended making a rising traverse towards a "tree-lined gully" and then heading up the side of that to eventually reach the summit ridge. The problem was, there were several tree-lined gullies!
So, would I go for Gully A, which looked intimidatingly steep in this foreshortened view, but which with the benefit of hindsight was almost certainly the Correct Answer...? 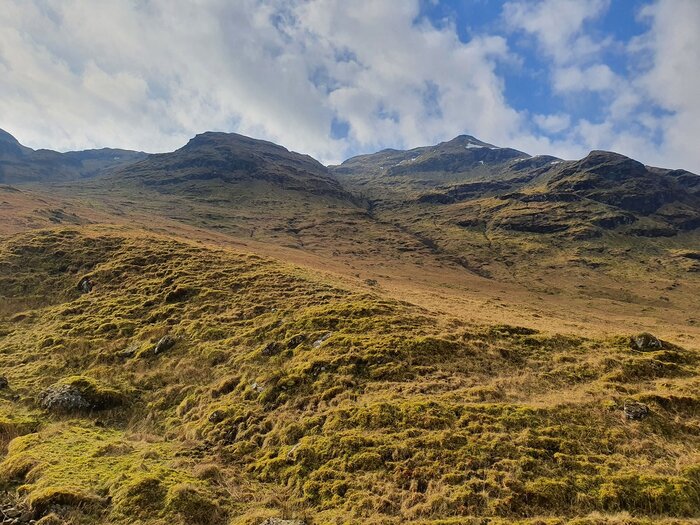 OR - would I go for Gully B, which looked deceptively easy lower down, but which inevitably concealed considerable hidden steepness higher up Inevitably, I went for Gully B. Ah well, you live and learn. If you don't fall down those very steep and exposed grassy slopes into that incised stream gully, that is

.It was fine to start off with, but that rocky lump after the gully bifurcation looks potentially tricky in this photo - and it was! A zoomed shot of the Beast that caused me such fun! I just took my time over it - well, to be honest I didn't have much option! - but at least I had some fine views across the glen by way of distraction, with the Crianlarich Munros Beinn Tulaichean and Cruach Ardrain having lifted their heads out of the clout by now. Having negotiated the flanks of the rocky Beast without falling into that stream gully, I was worried about whether there might be yet more steepness higher up, as well as potential Snow Issues on these north-facing slopes. It was therefore quite a relief to find, once I eventually got up there, that there was a steep but grassy and snow-free route all the way up to the summit ridge. Up on the ridge at last, with Snoop Dogg looking deceptively close by now, but there is a deep hidden bealach between the main Corbett summit and its eastern Top, Meall Reamhar. Thankfully however, a reasonably good path materialised out of nowhere once I reached the summit ridge, and the path made light of the entertainingly scrambly descent down to the bealach and the easier (though still steep) ascent back up the other side. Looking westwards, I think - I'm not entirely sure, but it was a nice view anyway! Looking back north to the Crianlarich Munros and the Corbett's north Top, which is only about 150 metres away from the main summit, and which I therefore planned to visit for the views before heading back down: Yours truly, passing the time of day with the Doggfather! I headed over to the north Top, which did indeed boast a grand view east to Loch Voil (I think it's Loch Voil, anyway): 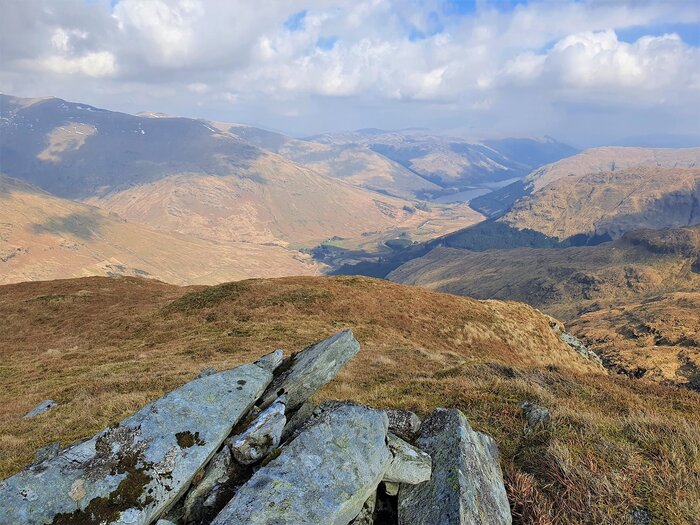 It also had a slightly better view of the Crianlarich Munros across the glen than the main summit did: I headed back down to the bealach and then back up to Meall Reamhar, following the path along the ridge to eventually join the remnants of an ancient fence (just iron fenceposts, basically), which would provide a handy navigational marker in Clag. I was lucky enough to get lovely weather all day, however! There was a wee glimpse of the western end of Loch Katrine (I think that's what it must have been, anyway!) to the north on the way back along the ridge: Eventually, the fenceline headed down steeply northwards, heading down the steep but straighforward Creag nam Saighead ridge. It would be possible to come up that way for an easy life, but where's the fun in that, now Looking back along the fenceline to Snoop Dogg's main summit: On the way down, I got a look in passing at the steep way that I'd come up - probably not recommended, on the whole, although it was fun in its way... A surprisingly steep and funsome hill, this, considering that it's so close to Glasgow

Fionn Bheinn - maybe not very pointy, but what a viewpoint!