! It was, however, blighted by what I can only describe as Attack of the Cairn Flies

- of which, more later.
Mrs Bobble Hat and myself had planned a week's holiday in Strathpeffer with family and friends in late August & early September, what with Cannes, the Bahamas and the likes being off-limits this summer

, but I'd taken a couple of extra Annual Leave days myself so that I could get a bit more walking in first, tackling some of those tempting-but-logistically-awkward Far North Munros that I still had to do. I'd driven up to Inverness after work on Wednesday night, got Ben Hope ticked off on the Thursday, and then driven down to Ullapool on the Thursday evening so that I could hopefully tackle Conival and Ben More Assynt on the Friday.
I enjoyed a comfortable night (also good beer and a tasty seafood dinner

) at the Morefield Motel on the north side of Ullapool, and set off with a good hotel cooked breakfast in my belly, to attempt Conival and Ben More Assynt by the standard route from Inchnadamph. I couldn't believe my luck - the sun was already splitting the skies, and the forecast was excellent all day

! Shurely shome mishtake.
I started from the walkers' car park just south of the Inchnadamph Hotel, as per the website route description, and set off on the private road past Inchnadamph Lodge that heads off inland from the A837 just after the bridge over the River Traligill. This is apparently one of the UK's premier spelunking sites, with a big complex of limestone caverns lying just a bit to the south-west of the two Munros. The caves are signed from the start of the route: 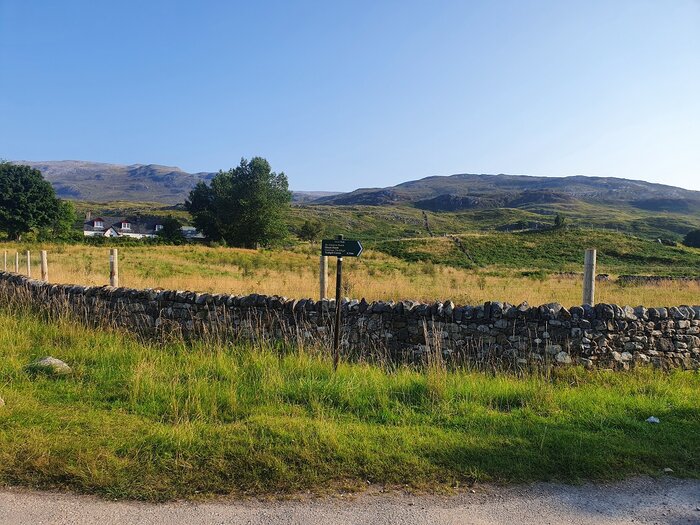 It was a relatively long but scenic walk in along the Gleann Dubh, forking left when the track to the Traligill Caves branches off right, and continuing on a surprisingly serviceable path. Before that long, Conival was looming up dead ahead, and the path was trending leftwards into a small hanging valley containing the tumbling Allt a' Choinne Mhill burn: 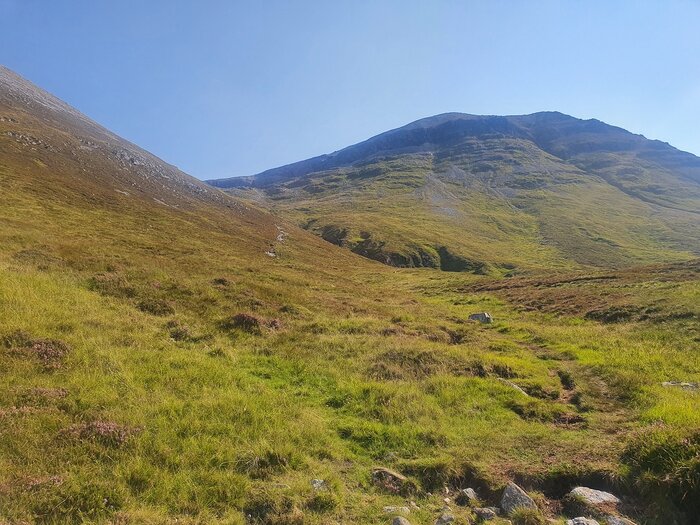 So far it had been a straightforward walk, but the path gets a bit steeper and rougher as it rises through the hanging valley. As is usually the case when the going gets tougher, however, some fine views were opening up by way of distraction: the tough may get going in such scenarios, but personally I tend to stop for some photo-shots

.
An impressive view back south-westwards, with Cul Mor extremely impressive to the left of this shot, and Canisp only slightly less so, to the right: 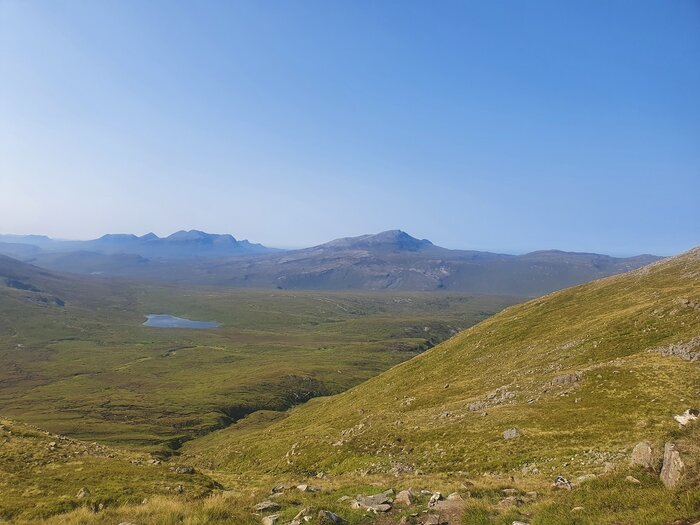 A zoomed shot of Cul Mor, with Stac Pollaidh's unmistakeable profile clearly visible just to the right away in the distance: 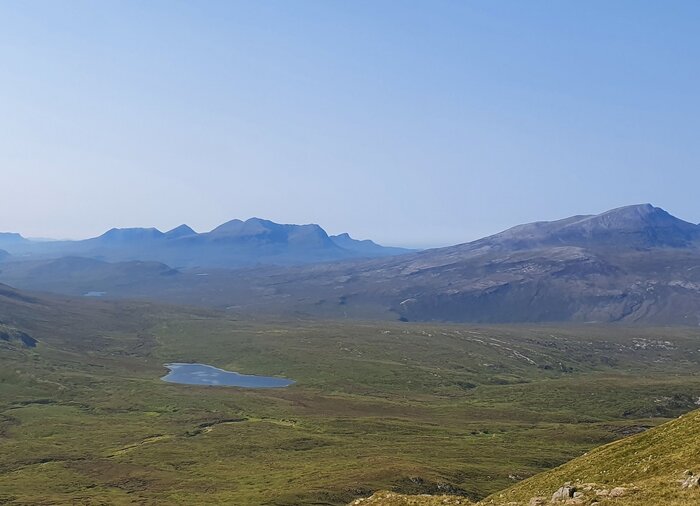 After passing an attractive series of small waterfalls and rock pools on the Allt a' Choinne Mhill, the path up through the hanging valley culminated in an entertaining wee scramble up through a band of crags. It wasn't at all difficult (well, not in perfect weather conditions such as I enjoyed anyway), and there were some marker cairns to show the way 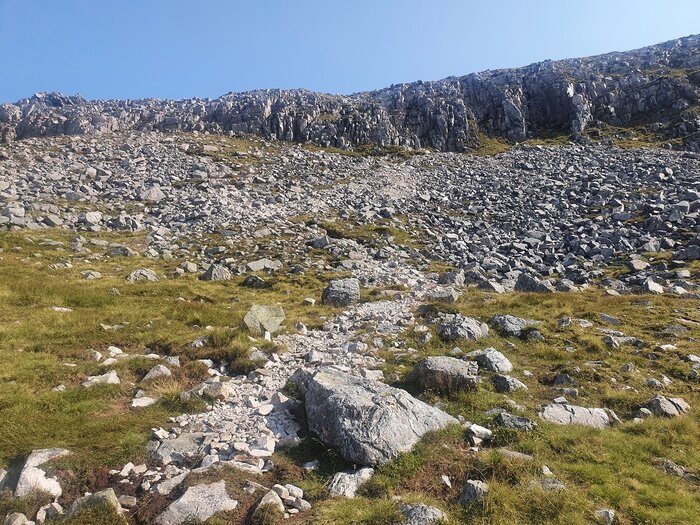 A grand vista back down over the hanging valley, with Conival's summit environs coming into view up to the left: 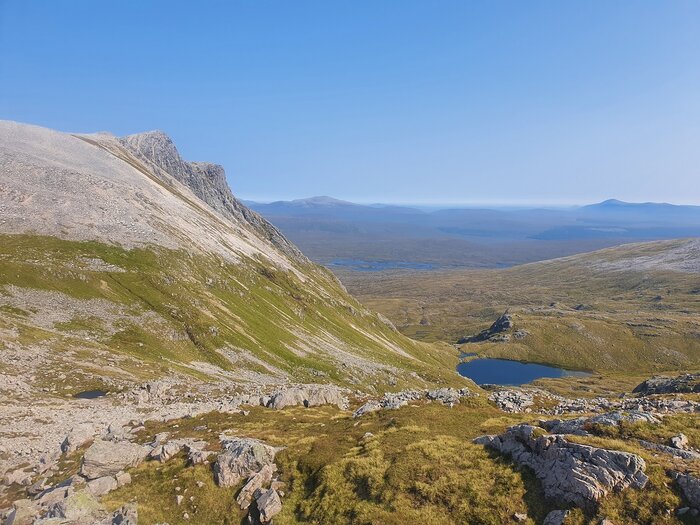 Conival's summit didn't look too much further up now, and I got my first proper look at the fine but extremely reclusive Ben More Assynt, as well as the impressive connecting ridge between the two Munros, complete with lots of lovely scree! 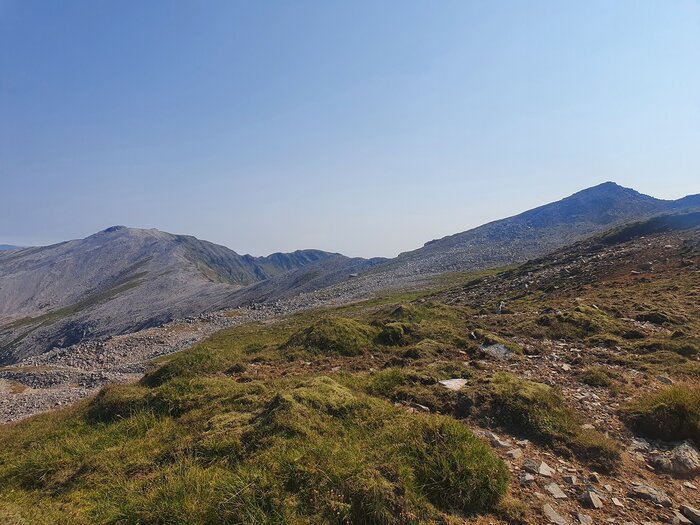 I'd been aware all the way up the glen of the Allt a' Choinne Mhill, however, of increasing numbers of rather irritating insects. These were neither the dreaded Scottish Midgie, nor the equally loathsome Scottish Cleg (which unlike the Midgie can deliver a nasty bite right through a T-shirt or even a pair of cotton breeks

). No, these seemed to be some evil, intermediate-sized dipteran species that I think are known as "blackfly" - I believe that they usually prey on deer, which makes sense as there must be large numbers of deer in these parts.
However, small creatures with short lifespans can evolve scarily quickly to fill new environmental niches

. As I arrived at Conival's impressive windshelter summit cairn, I discovered to my surprise that a whole new subspecies of blackfly has clearly emerged during the recent increasing popularity of Munro-bagging, which now makes its living out of hovering in huge swarms over the cairns of popular Munros, waiting for unsuspecting hillwalkers to arrive as unwitting sources of nice Blood Meals for the little darlings

. I'm not sure if they have an official entomological name, but I can only describe them as "Cairn Flies".
Attack of the Cairn Flies 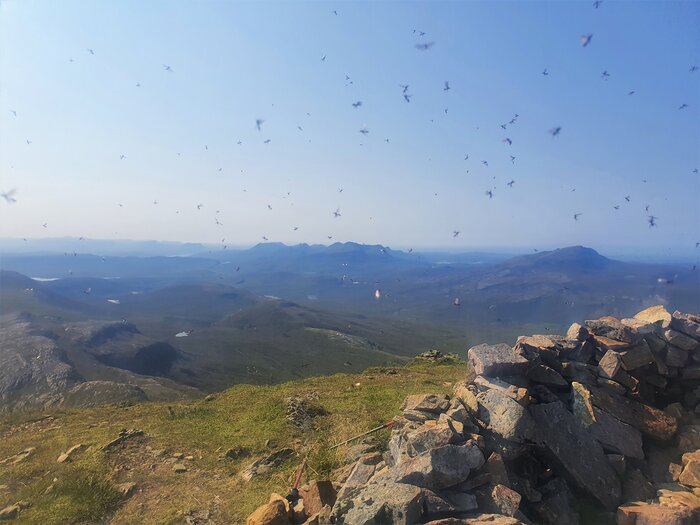 Honestly, it had a distinct Star Wars feel - I was very much reminded of Count Dooku's insectile drone army in that rather dodgy Star Wars film "Episode II - Attack of the Clones". You'll remember the one, I'm sure: Christopher Lee was actually rather impressive as the sinister Count Dooku, but the film is let down badly by some truly plonking dialogue. For instance:
YODA [addressing Count Dooku, who is clutching a red light sabre and is backed by a vast army of insectile robot drones]: "Ah, the Dark Side of the Force in you I sense, Count Dooku."
THE AUDIENCE [collectively]: Duh!
Anyway, you get the picture. The views were some of the most stunning I've ever enjoyed, but it was difficult to appreciate them to their full while simultaneously slapping madly at all exposed skin surfaces to avoid being eaten alive...
I did my best to get some photos, nevertheless.
There was a truly spectacular vista down over Loch Assynt towards Cul Mor, with only one solitary Cairn Fly managing to make it into the shot (probably because all the rest of them were busy drinking my blood by now 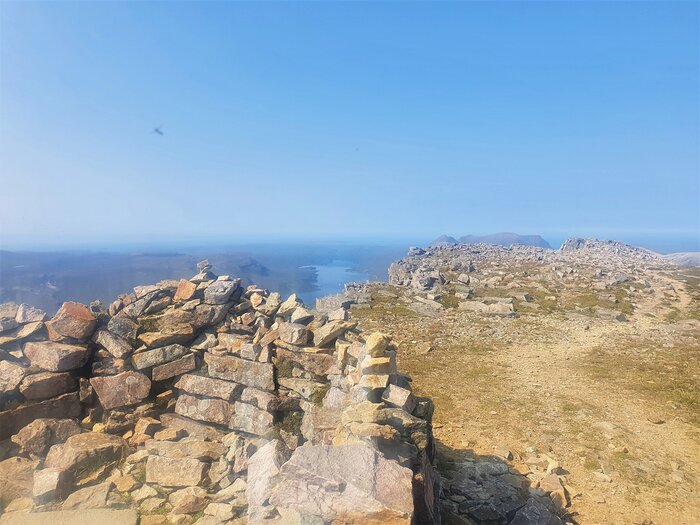 The onwards route towards Ben More Assynt, with a good view of Ben More Assynt's seriously impressive southwestern ridge: this looks to be truly marvellous, but it ends in the back of beyond, and I wouldn't be tackling it today! 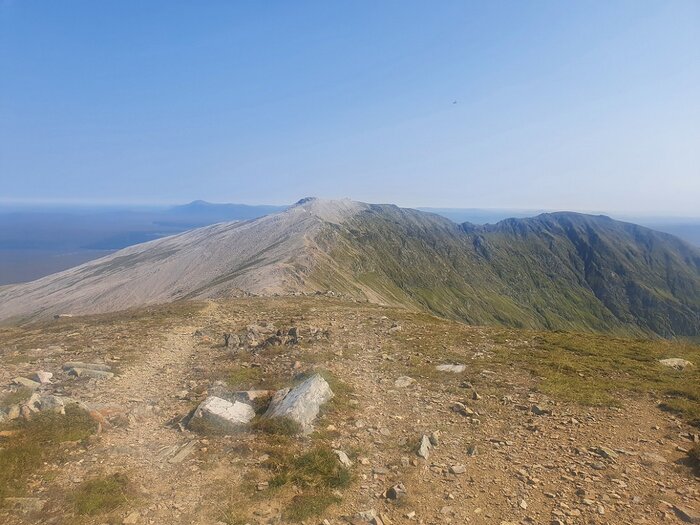 Looking northwards from Conival summit environs, with Ben Hope (which I'd climbed yesterday) visible away in the distance I think, and with the impressive Na Tuadhan buttress prominent in the foreground: 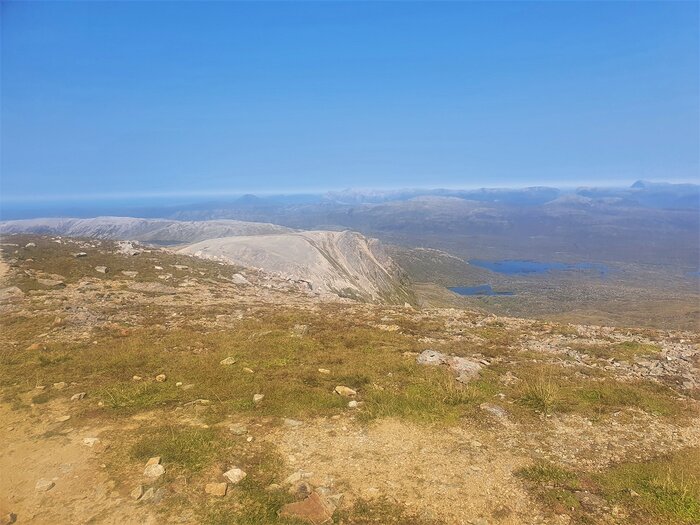 A zoomed shot of Na Tuadhan with that fine northern vista in the distance: 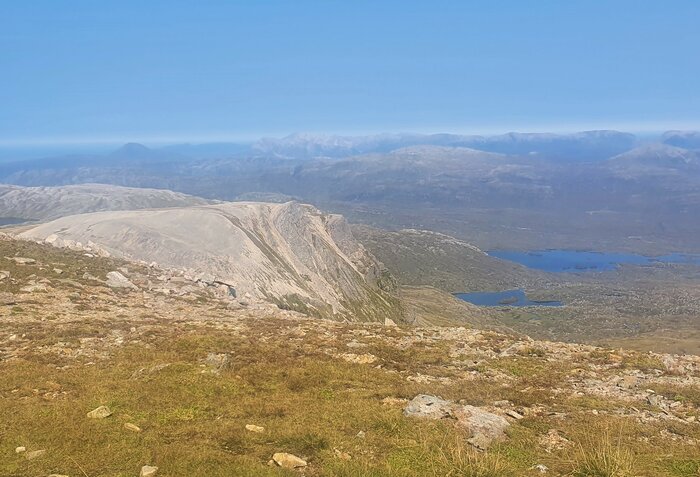 And another look at that marvellously scrambly southwestern ridge of Ben More Assynt: 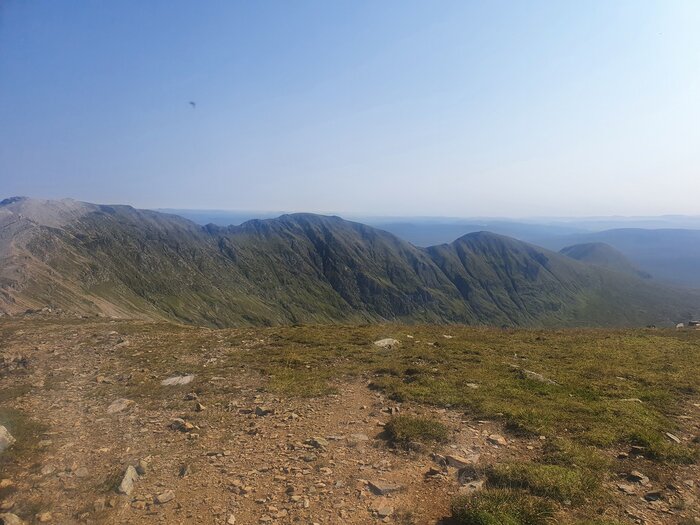 Anyway, it was clearly time to move on now, as I really couldn't withstand much more Cairn Fly Attack

! Thankfully, I outwalked them fairly soon as I set off along the rocky connecting ridge between the two Munros. The foreshortened view from Conival summit makes it look straightforward, but as all the Munro Guides warn, the terrain is rather tricky with a lot of scree and boulderfield, and it takes longer than you'd expect (well, it took me longer than I'd expected anyway). Nevertheless, the absence of Cairn Flies was a huge relief. There were several other parties enjoying today's marvellous weather, however, and as I neared the final ascent towards Ben More Assynt, I met a somewhat exasperated Englishman who imparted the glad tidings that "THE FLIES ARE EVEN WORSE ON THIS ONE!"
And they were 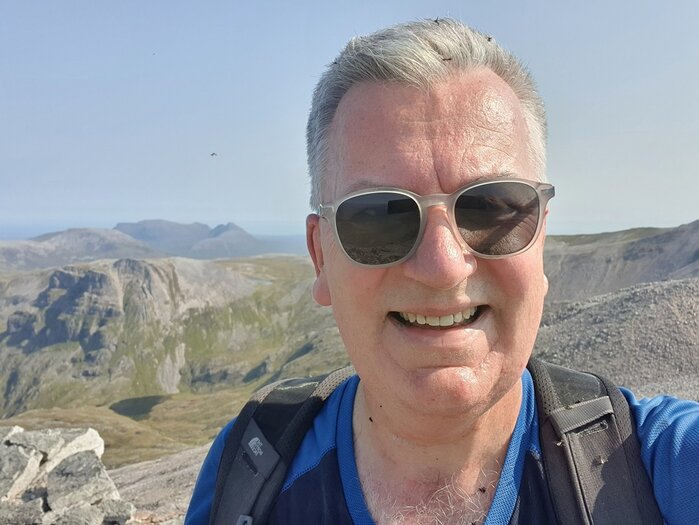 Ah well, the flies may have been even worse, but the views were probably even better.
Looking back to Conival from the more northerly of Ben More Assynt's two cairns (which I think marks the true summit; you could tell because it had a larger swarm of Cairn Flies than the other one!): 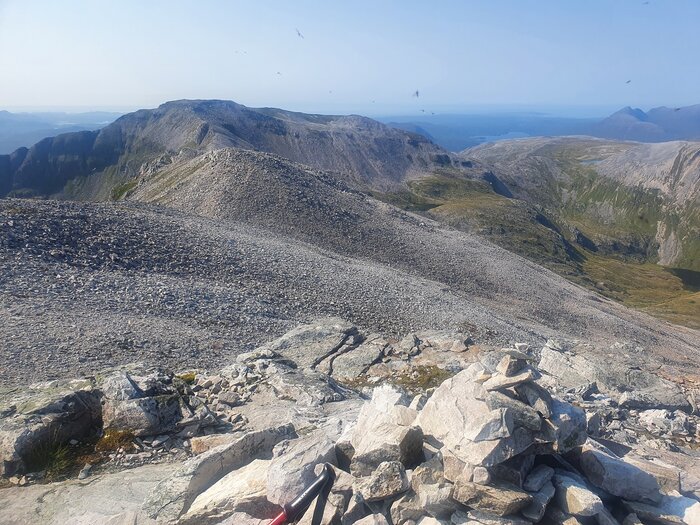 At the other cairn just to the south, and looking back towards the main summit: 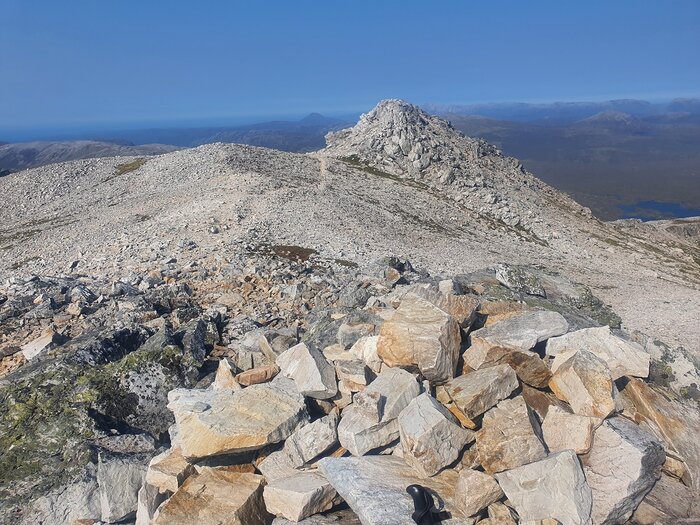 Looking southwestwards down that seriously impressive continuing ridge. Another day, maybe, although this ridge ventures into some seriously remote Back Country

. To paraphrase Joel Fleischmann in "Northern Exposure": "This isn't the middle of Nowhere. This is the obscure outermost fringe of Nowhere." 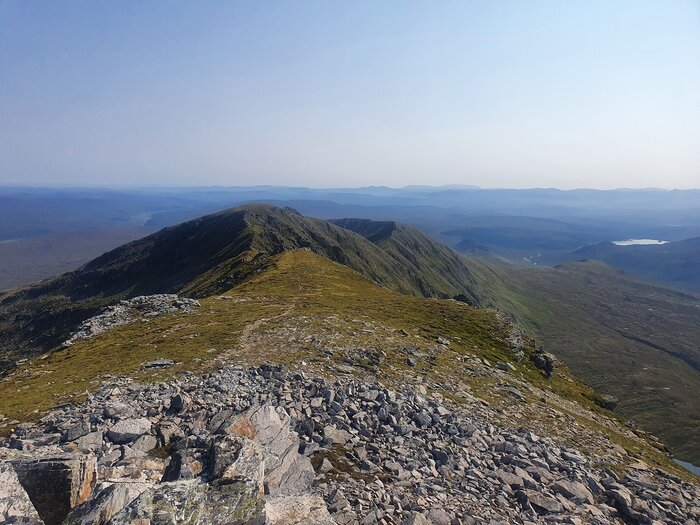 Looking back again to Conival, with Cul Mor et cetera still very impressive in the distance: 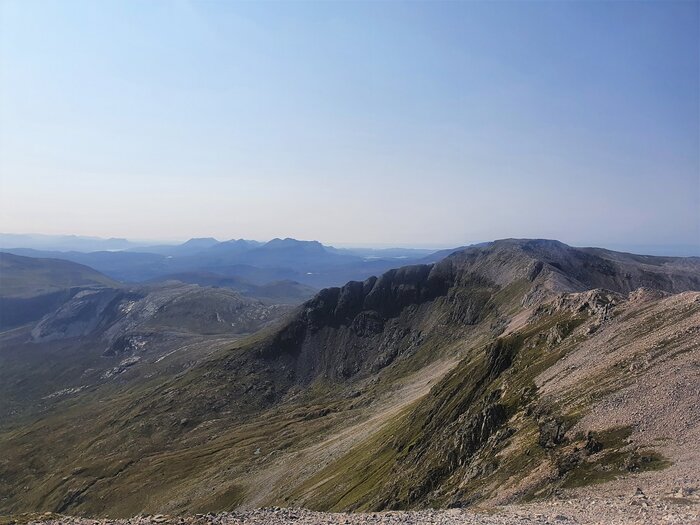 The only realistic way of bagging these two Munros involves re-tracing one's steps from Ben More Assynt, so that it it necessary to climb Conival twice. Ah well, I set off undaunted back along the connecting ridge, relishing the opportunity to enjoy all that scree and boulderfield a second time round!
When I got back to Conival's summit environs, however, the views were ample reward for all the physical effort, all the Cairn Fly mauling ... really, for all the nightmare of the last couple of years. It was a truly magical moment. Really, this is what it's all about

.
An impressive view over utter desolation to the north, with Na Tuadhan buttress again in the foreground and lots of wee lochs stretching away into the distance: 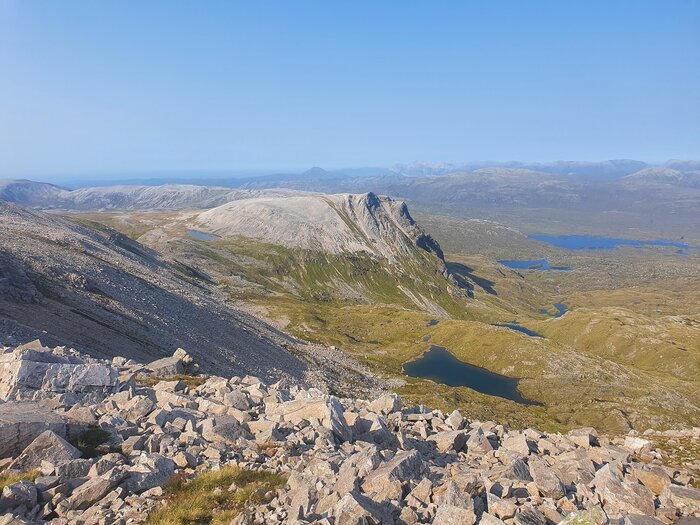 Back at Conival's windshelter cairn, with the Cairn Flies thankfully by now mostly having gone off to bed with full tummies, so that I got to enjoy this jaw-dropping view down Loch Assynt relatively unmolested: 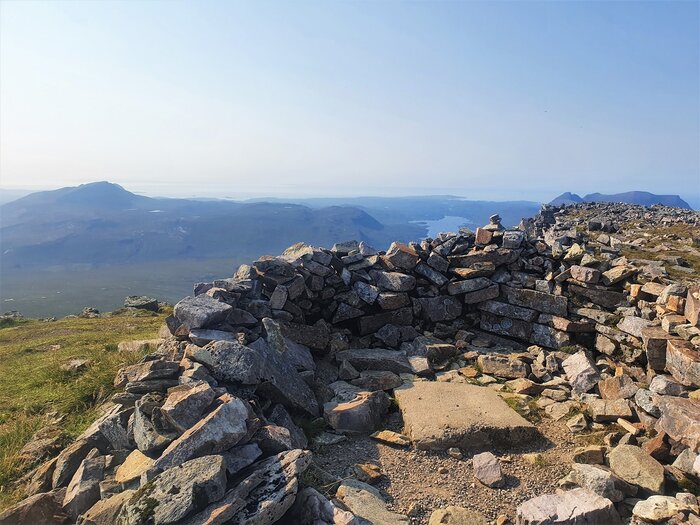 Another spectacular vista over Cul Mor and Loch Assynt on the start of the descent from Conival: 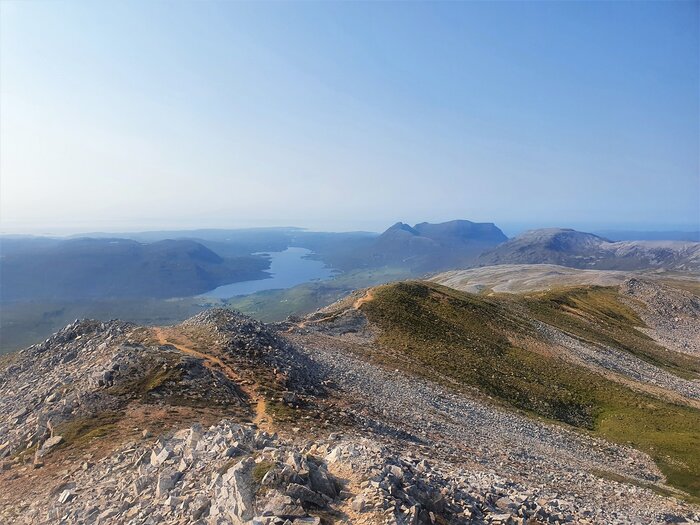 A zoomed shot towards Canisp - and I think that is maybe a wee corner of Suilven keeking out just to its right? I was slightly worried about the down-scramble through the band of crags leading back down into the glen of the Allt a' Choinne Mhill, but I needn't have fretted: once again there were a couple of marker cairns that marked the best spot to start the descent, and in fact it proved to be easier to go down than it had been to go up. Soon enough, I was back on the Gleann Dubh path, casting a fond look back towards Conival in the late afternoon light: 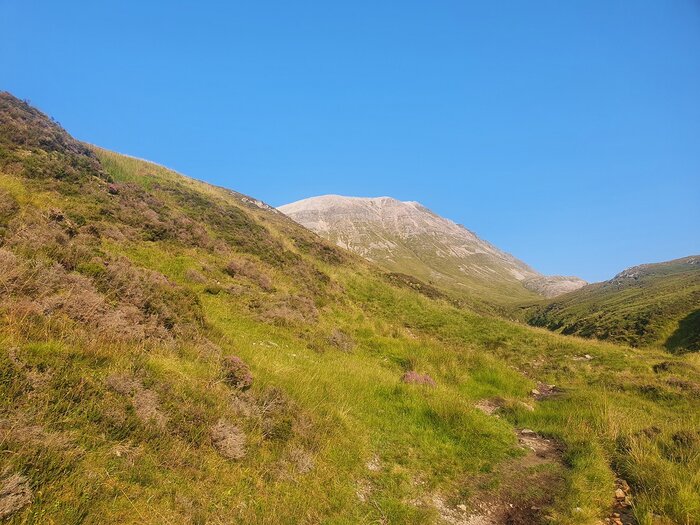 An almost perfect day - despite the Cairn Flies