our_route.gpx Open full screen  NB: Walkhighlands is not responsible for the accuracy of gpx files in users posts
Hope you enjoy my first walking report at Walkhighlands...
Every year we plan a short trip to the Scotland, a tradition we started some years ago. After the Ben Lomond region, the Ben Nevis region and the Cairngorms, this year we had our mind set on Knoydart/the first three days of the Cape Wrath Trail.
Normally we're a party of three, but my brother in law Peter joined in: he wanted to check for himself if these walking trips were as good and enjoyable as in the stories we told upon our return

Considerable planning, that's what it's all about. So, having done our research with a lot of help from the Walkhighlands forum, we decided a selfsupporting walk from Glenfinnan to Kintail Lodge in 3,5 days was doable. Maybe even ending it of via the south glen shiel ridge, wouldn't that be marvellous.
I'll give the spoiler right away: we did reach Kintail Lodge, but with a slight detour

Day one: Glenfinnan - Strathan (15 km)
Leaving home around 4 o'clock at night, we arrived at Schiphol Airport. A couple of hours later we found ourselves in rainy Glasgow, rented a car and drove to Fort William in two hours. Here we changed vehicles again: just in time for boarding the train to Glenfinnan. Around lunchtime we set of for the first walking stretch. Our goal today: Glen Pean/Strathan.

Enjoying the scenery we quickly reached Corryhully, where we were surprised by three WWII fighter-planes flying low in the valley.. The going was easy and the weather better than expected: heavy clouds, beautiful light and...no rain (yet). Passing by a seemingly useless gate we wondered if this had ever been in use. Although still sunny, we saw dark clouds ahead when we made our way up to Strathan. 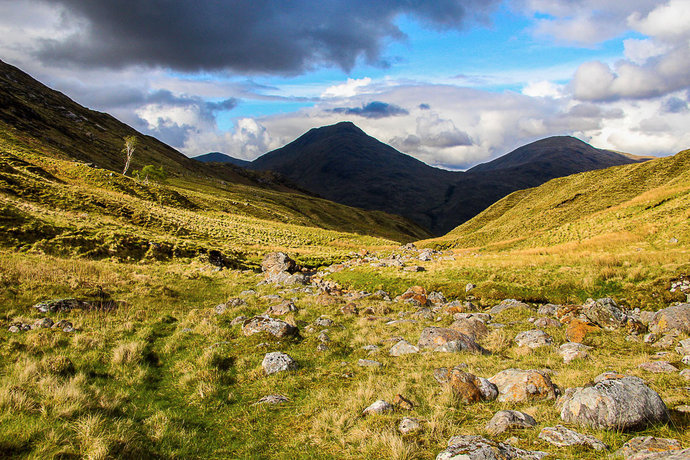 After a very long day we arrived at our designated camping spot around 7 PM. We met some other hillwalkers, participating in the challange and found ourselves a lonely spot near the river. Just as we set up our tents the rain came in and we quickly sought shelter inside. Tired as we were, we fell asleep and woke up hungry a few hours later.
With only a drizzly rain outside, we decided it was time for our first "goodie bag": everybody had taken something to surprise his fellow travellers, mostly it had something to do with a foodsnack and alcohol. But tonight's surprise was of a different kind: a Swedish torch (essentially a big heavy piece of dry wood with saw-cuts, filled with highly flammable material). What seemed like a good idea at the time, had turned out to be a heavy burden (an extra 3 kg) that didn't give the warmth and fire we expected. But we enjoyed it anyway, decided not to carry this with us ever again, made a quick picture and went to bed. camping spot on the banks of the river at strathan looking back at glendessary and beyond

After a rainy night the sky cleared and we were off again, our plan was to camp at the river Carnach overlooking Beinn an Aodainn. But after we reached (upper)Glendessary the going got tough and the path rougher. Rain started to come down and we made slow progress. Lochan a Mhaim in the rain

Halfway through the day we decided that in these conditions we probably would not reach our wildcamp-spot this day, but also feared we would be short in time to reach Kintail Lodge - with the risk that we might miss out on our transport-schedule that would ultimately bring us back in the Netherlands again. Sure, we could make longer days, but it was also supposed to be a fun and exhilerating experience, to be enyoed and not to be rushed.
After a quick vote we decided to change our plan: we would stay the night at Sourlies, and head for Inverie the next day. going down to Sourlies

After we passed Lochan a Mhaim it stopped raining and we followed the path along Finiskaig river, and the first views of Sourlies bothy came in sight. 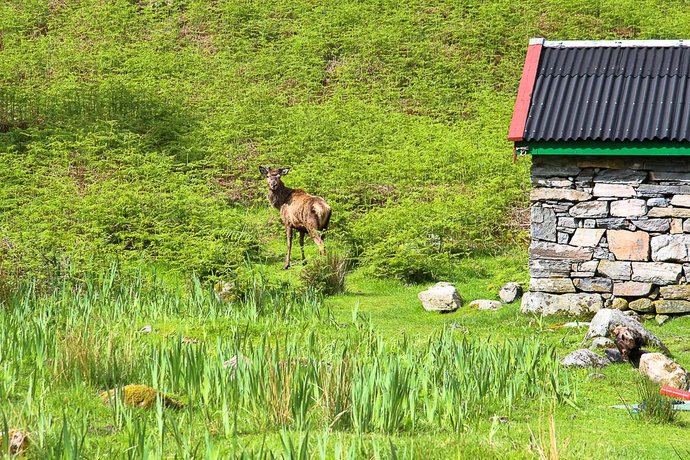 Around 4 PM we reached the bothy, where fellow travellers already had found refuge. We found ourselves a nice camping-spot overlooking Loch Nevis. Because it started raining again, we went inside for our second 'goodie bag', this time without swedisch torch, but in good spirits

We swapped stories and were told that the path through Barrisdale was rough en unforgiving. Afraid we had to little time, we decided to stick to our earlier decision to head for Inverie next morning.

Day 3: Sourlies - Inverie (14 km)
After a good night's sleep we went our way again. The tide was low and we had a great walk along the beach to Carnoch where we crossed the 'dangerous bridge'. along the beach to Carnoch

Climbing up to Mam Meadail was heavy, but rewarding. No rain, nice views and good paths, compared to yesterday it felt like a highway. climbing up to Mam Meadail Because we hadn't planned to be here, we weren't exactly sure what to expect and where to put up our tents. So we were pleasently surprised to find one of the best camping spots ever at the Long Beach, overlooking Inverie Bay. We warmed up some food, looked into the last goodie bag (limoncello rainbow in the Rough Bounds

It was getting dark, so it started to rain again

. We went for a visit to the The Old Forge, had a great time and bought us som nice reddish shirts to prove we had been to Scotlands remotest pub. Sundown at Inverie camp-site at the beach

Normally I don't get up easy, but when I peeked outside around 7 in the morning, I was awe-struck. What a view!
I later mailed this picture to a friend and she got tears in her eyes.
Yes, we had our fair share of rain, but that's easily forgotten when you look at scenery like this. love to go, hate to leave

We packed our bags again, walking to the harbour, arriving just in time for the ferry to Mallaig.
At the boat we we met a party of three elder men we had seen earlier at Sourlies. We took pictures, while they informed us about a rumour of some guys from Holland that had carried a Swedish Torch with them

We pleaded guilty and promised never to do it again

With some time to spare and the weather so beautiful (the sun was shining, it was hot!), we dried our gear while waiting for the train to Fort William. We were a long way from Shiel Bridge, but because we had made reservations at Kintail Lodge and wanted to see what we had missed out on when we changed our plan, we decided to drive up North anyway.
After a long and beautiful drive, we saw the munro's of the South Glen Shiel Ridge we had planned to climb, waiting for us in perfect weather, but not enough time to complete them We settled for a short trip to see Eilean Donan Castle and went back to our hotel, where we had some drinks in the evening sun. And we found out that the reddish shirts we had bought at The Old Forge were actually kinda pink

Late in the evening, having our diner at the hotel, we saw familiar faces coming, looking exhausted and very puzzled that they saw us here and wondering how we got here (looking so relaxed) when they last saw is at Sourlies bothy... Next day we drove back to Glasgow, but not without a stop at the Kings House Hotel. A few years back, on an earlier trip, we passed the hotel, but forgot to take a picture of the funniest sign ever. And guess what, it was still there. Been there, done that Somewhere along the way, we saw so many people looking at the railway that we stopped to ask what was so special. Well, this double headed steam train. We had some of the foulest tasting coffee near Loch Lomond before we catched our plane, and were back home before midnight.
As always, we had a great time in the Highlands, can't wait to get back again ! In fact, the next trip is set for this april, flying to inverness. But how to fill these full four days is undecided, so if any of you have a good tip

And my brother in law? He had a great time and wouldn't have missed it for the world