Quinags - Three ticks of the Corbett and Arthropod Variety

It's been a while (over a year) since I've posted a walk report here. Work commitments have taken over and I only have the time to read them now but it's the summer holidays now and we had an amazing trip to Assynt this week that I just had to share.

A few days in the far North West? Who can ever say no to Assynt? We had plans to stay a few nights at Achmelvich Beach and explore Assynt.

This would be our second trip to Assynt this year, the last being Alex’s first visit to Assynt (my second.) My dad had taken me to Assynt when I was in S1 at High School and I had been obsessed with the distinctive and somehow huge outlines of Assynt’s small mountains. Whilst other girls were doodling “I <3 *insert boyband member’s name here*, I was doodling Suilven’s majestic outline. The obsession continued but time constraints and work commitments always made Assynt a distant wish. Alex was quite reserved on our way up in April and I did wonder if my excitement for going to Assynt was because I had fond childhood memories and the reality 12 years on would disappoint. It did not. We had a phenomenal trip and climbed Suilven in the thick clag with views only of the other’s rucksack but the intermittent views were enough to have us transfixed on Assynt.

We had made arrangements to camp for a few days with a couple of friend who pulled out last minute stating “We don’t want to spend 4 days of our holidays in the ****ing wet.” I was a bit dubious at the forecast myself but stubbornness and the love of the far north saw us packing up and driving up regardless.

It rained heavily on the way up but was dry for us pitching our tent and our first evening. We scrambled around the rocks, practised some abseiling and rope work around the gneiss coastline (see what I did there – as a geographer gneiss, schist and thrust jokes will never get old) and wandered around the beaches. As beautiful and warm as the air was, the sea – not so much. 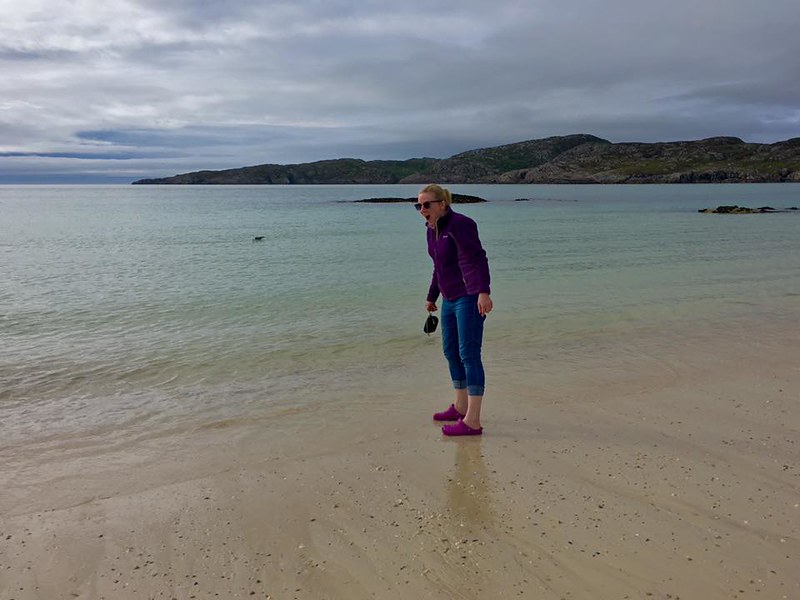 Sure my face says it all.

The next day it drizzled all day. We were holding out for Tuesday – the best of a bad forecast to climb the mighty Cuinneag. To fill our time we explored low level and visited the Old Man of Stoer. Were our friends right to pull out? I mean we were having a good time but Lunan bay up the road would also have been a nice coastal trip (not gneiss though.)

Tuesday arrived and it looked grim. We arrived at the deserted car park at half 9. I’d read the WalkHighlands description in the car and was suffering a bout of motion sickness so we didn’t set off until 10am. 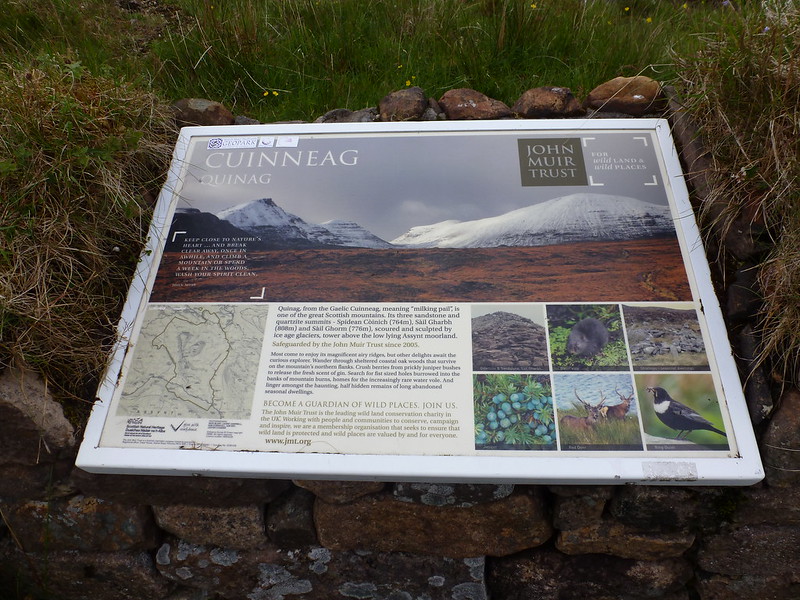 The start of the route is marked by a JMT info board.

The WalkHighlands guide and the board requested that we stuck to the excellent path. Having forgotten to pack my gaiters I was very pleased to see such a well maintained path.

The views ahead were uninspiring to say the least. If it hadn’t been for our ability to read a map neither of us would ever have known there was a mountain ahead.

As per the guide, we left the path at the cairn and climbed the shoulder of Spidean Coinich. The cloud was thick and visibility was still poor. The rock however, was excellent. A base of Lewisian Gneiss turned into Torridonian Sandstone, both of which gripped nicely despite the dreich conditions. From time to time, the cloud lifted her skirt and showed us Loch Assynt and the ankle of Suilven but we were sure it was going to be a day of compass bearings and waterproofs. We took a bearing every so often to stay safe and soon reached the double cairned summit of Spidean Coinich. The view was very familiar and it made me wonder if I had been here before. 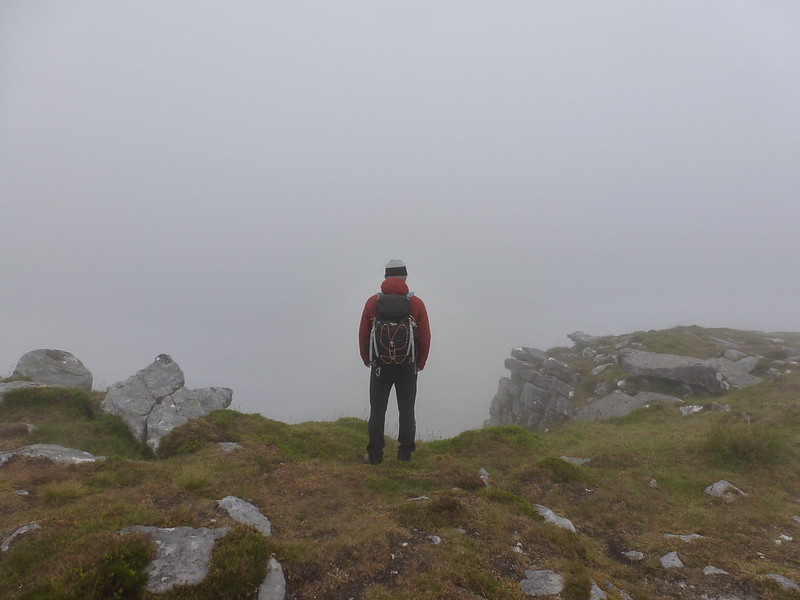 It wasn’t immediately clear which way we should descend. Surrounding us seemed to be intimidating drops and cliffs but eventual we spotted a path trotting off down the north.

I’m not sure how narrow the ridge was or if there was much exposure because the cloud kept it covered for us. As we dropped in height, the cloud teased us and allowed us brief glimpses of what lay ahead. 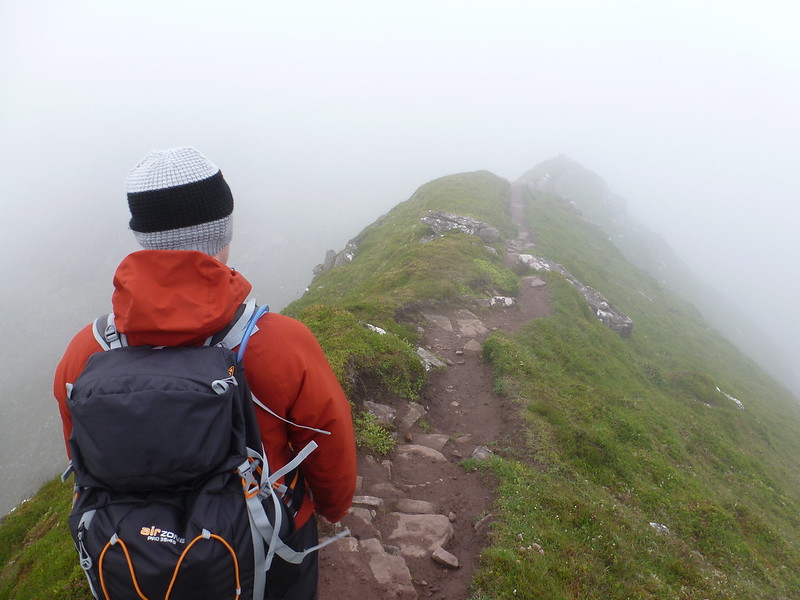 Alex marching along the ridge 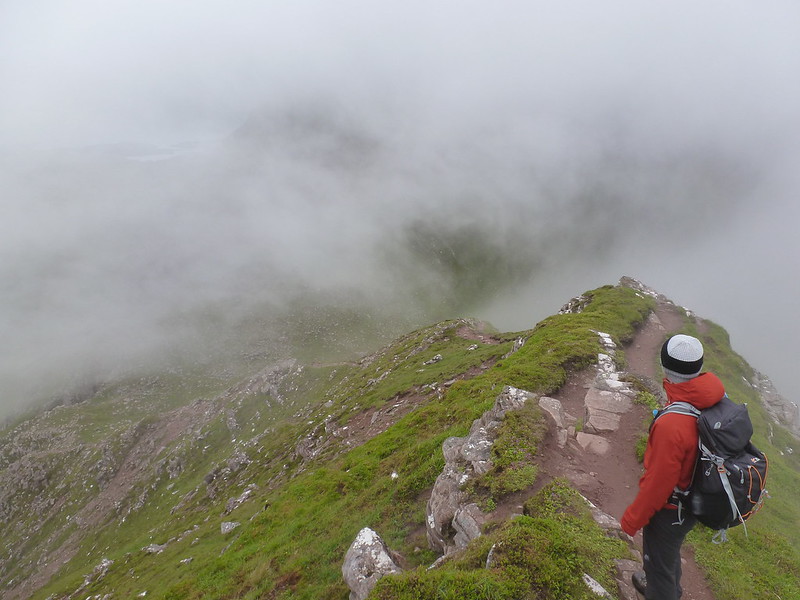 The cloud teasing as we lost height

After a fair few ups and downs and a spot of very easy scrambling, we reached the far away peak of Sail Ghorm. We met a French couple very close to the summit who told us they didn’t speak great English but it was only 100m away and there were no views. It did lead to us discussong how a French couple find a mountain like Cuinneag. Scottish ancestry? A lost bet? Who knows but I doubt the majority of my non-hillwalking friends and colleagues would have a clue that Quinag was a mountain is Assynt or even where Assynt was.

The French couple were correct – no view. We sat for a while in the hope it might lift but no luck. We retraced our steps as per the WalkHighlands description and just as we reached the point where people pose for scary photos something happened…. We turned around and there was Sail Ghorm. 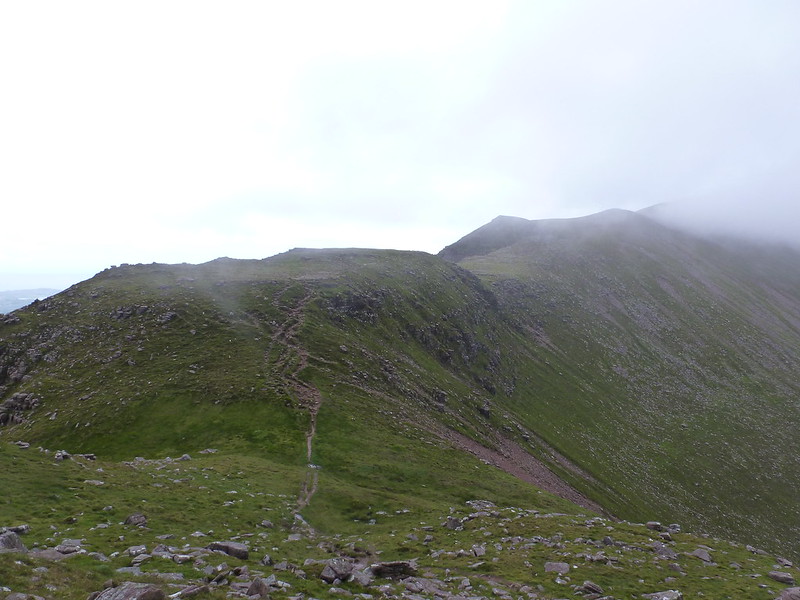 The view back towards Sail Ghorm

It wasn’t long before the entire mountain and her surroundings came out. We could see Suilven, Canisp and more. The spectacular knock and lochain coastline. Although it was all visible, it was difficult to photograph as the cloud was still lingering thinly and there was a haze. We had to take a photo at the scary bit, except I wouldn’t let it be too scary as there was quite a wind and it was very exposed! 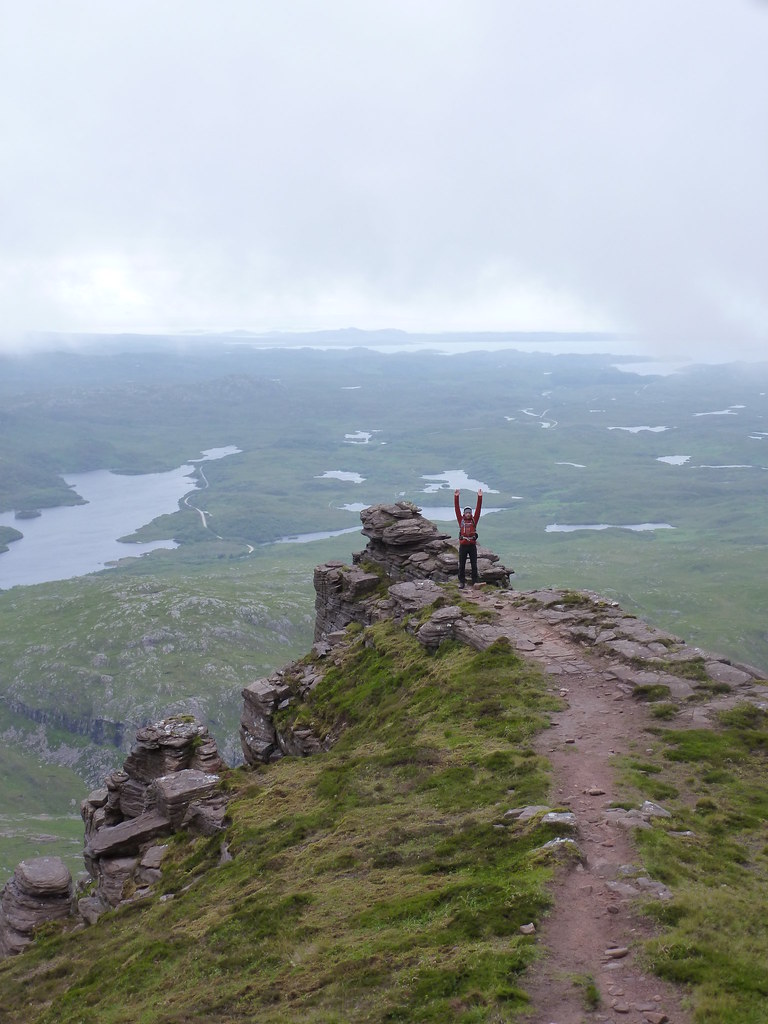 Alex disappointed I wouldn’t let him climb out onto the ledge but happy anyway. 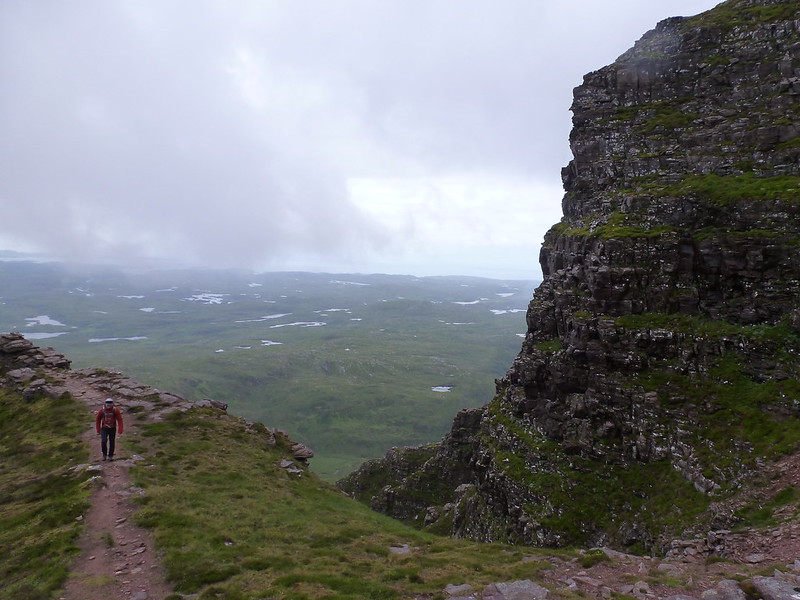 Returning from the ledge 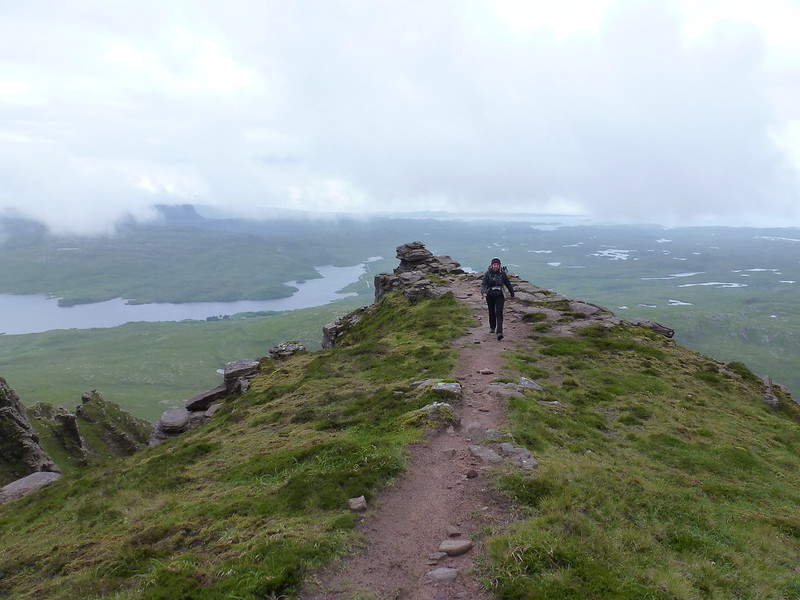 I was out there too – I promise.

As we retraced our steps, we bypassed the 745m summit and headed for Sail Gharbh who was out now. It looked a mere skip away. 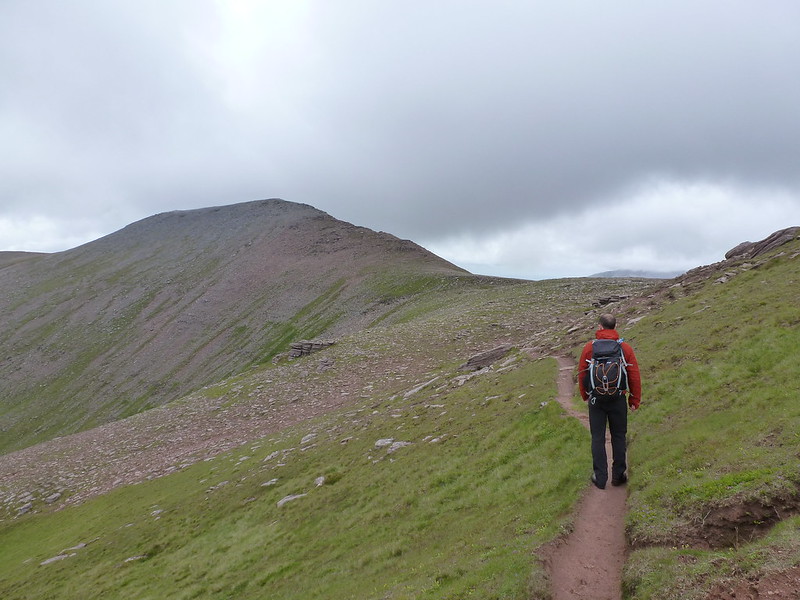 As we approached the bealach where we would descend after our third and final summit, the view was breath-taking. Spidean Coinich was on full view with Suilven and Canisp behind her. This was shaping up to be one of the best days I had ever had in the mountains. 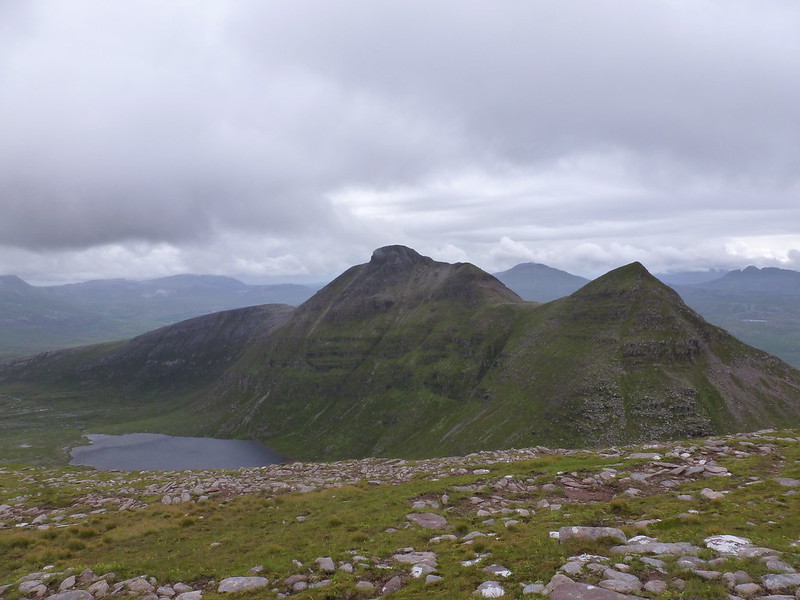 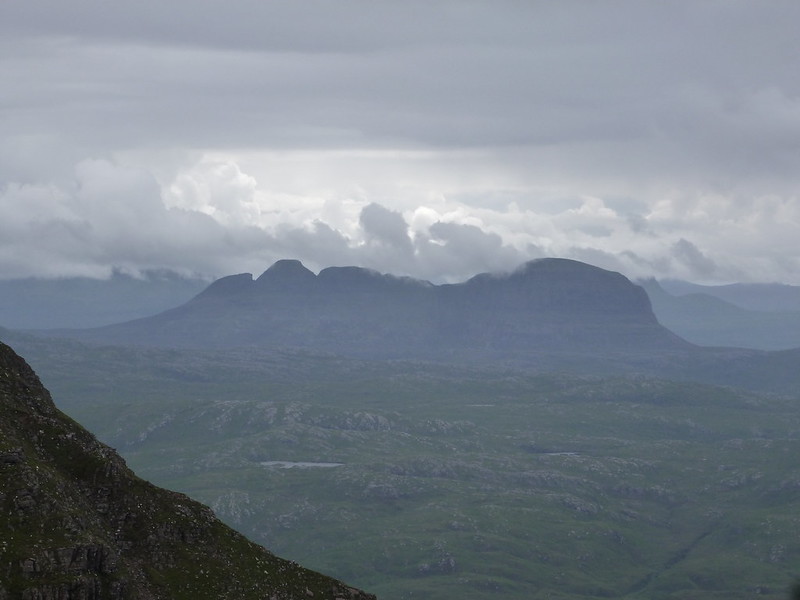 The unmistakable figure of Suilven appearing. 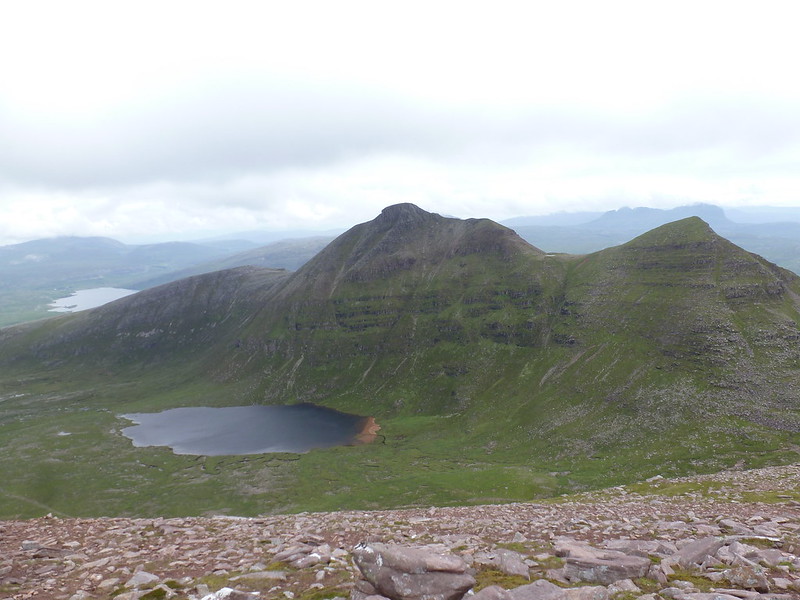 A slightly different view with no Canisp but Suilven instead (fair trade I would say). 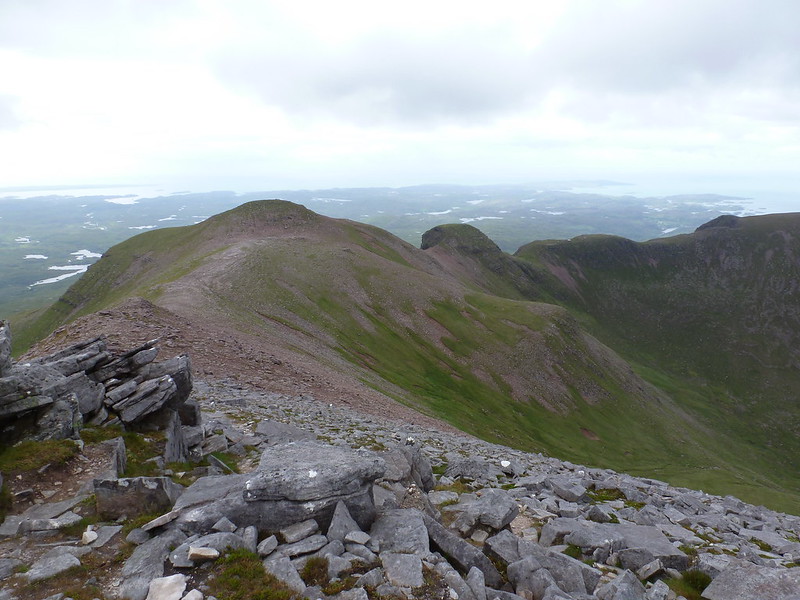 The view back along the notched ridge to Sail Ghorm

Almost right at the summit of Sail Garbh, we spotted a wee puddock and wondered how such a creature survived at 2,500ft such a distance from any lochains or puddles or bogs. 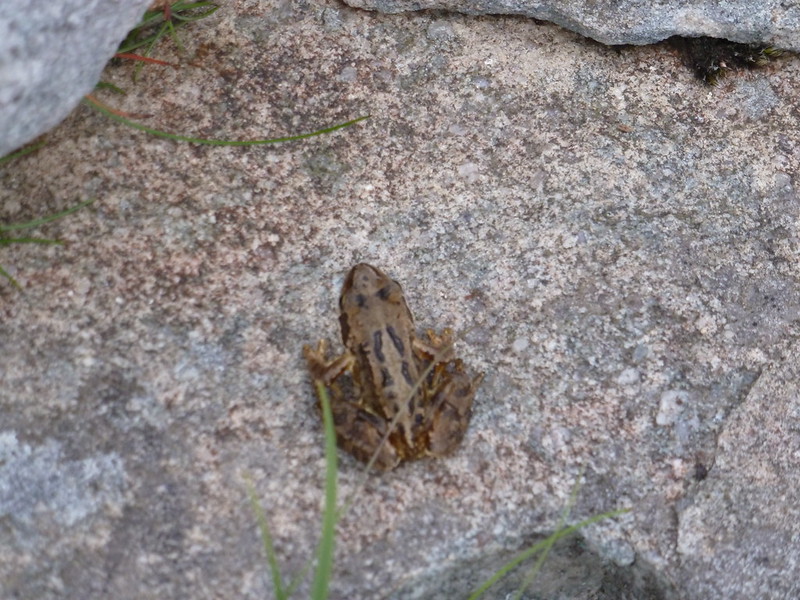 By this point, the cloud wasn’t lifting to show an ankle, she was almost completely off and showing us everything she had to hide. Ben More Assynt and Conival nearly made a full appearance. 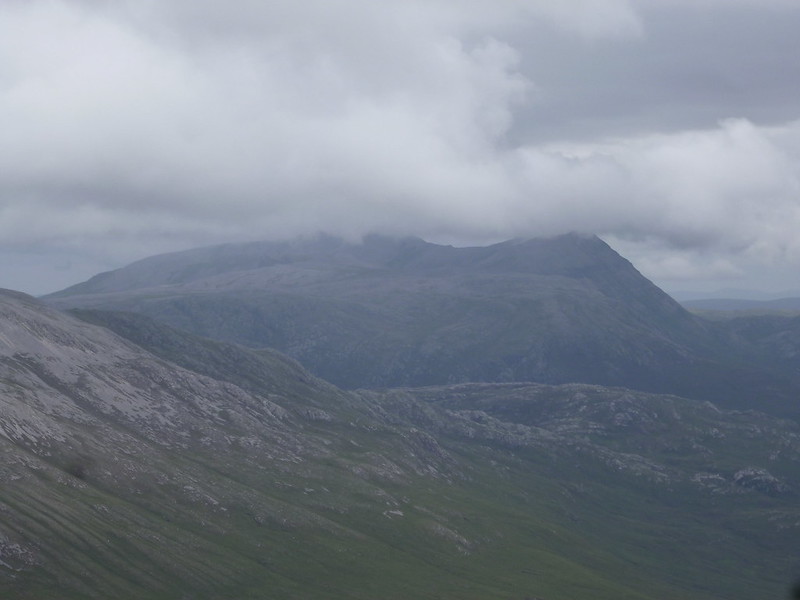 Cloud not quite revealing the Munros. 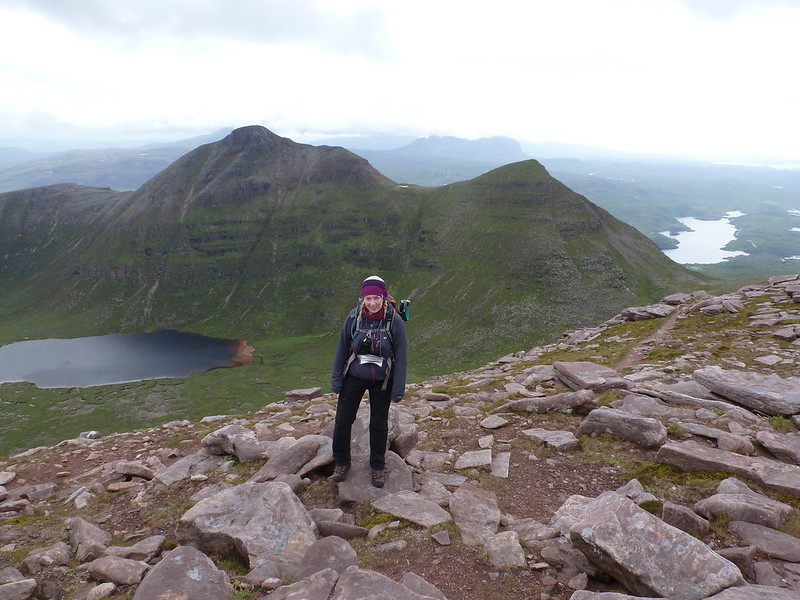 The descent was marked by a cairn and although eroded at first, a beautifully maintained JMT path is joined which leads all the way back to the car. We often don’t give these guys enough credit. I’ve helped to deliver the John Muir Award recently and have become very interested in their work. 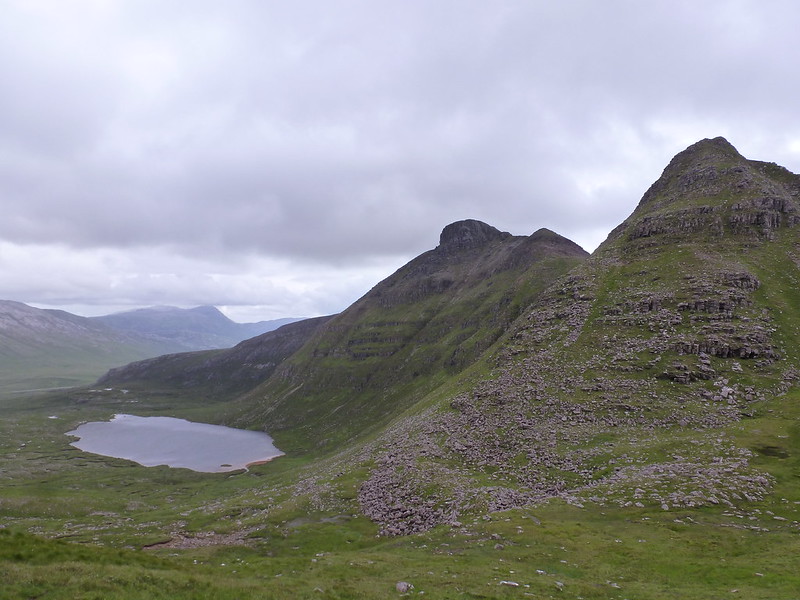 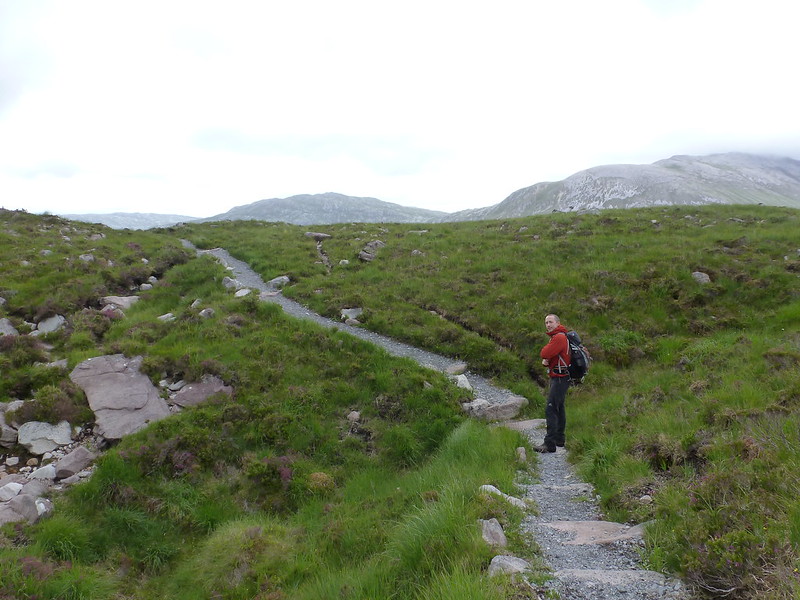 The final push to the car on an excellent path.

And as if by magic – upon reaching the car the rain came thundering down. 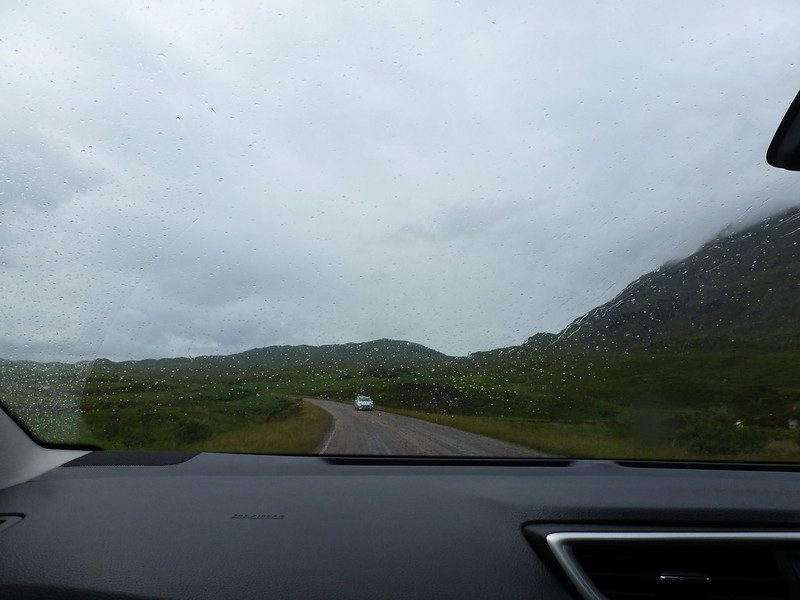 Later Alex discovered 3 ticks. Not sure if he picked them up at the camp site or on the hill. They were absolutely minute - smaller than a pin head. I made him follow my ritual of crushing them once removing them to ensure they're genuinely dead and don't going to reoffend.

All in all, Quinag gave me one of the best days I’ve ever had on a mountain and Assynt remains my favourite place in the world. 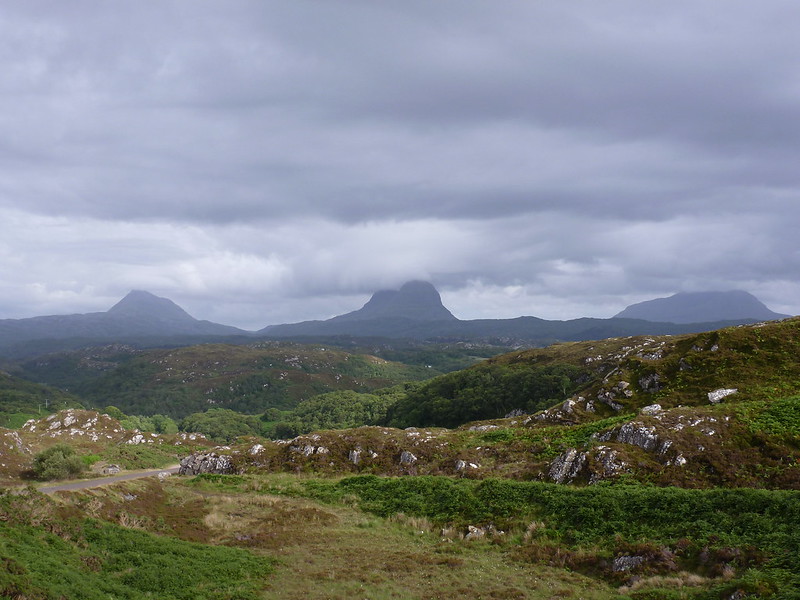 A picture from close to our campsite for no other reason than Assynt is amazing.
Click to mark this as a great report. Register or Login free to be able to rate and comment on reports (as well as access 1:25000 mapping).

Overcoming Obstacles on the Aonach Eagach

Welcome to the Jungle