I walk through Colinton and Craiglockart Dells once a week as a patrol volunteer for the Water of Leith Conservation Trust. I'm there to collect litter, report on pollution incidents, note how many people use the area for walking, angling, cycling, running or horse riding and to note wildlife. I'm also there to enjoy what is one of the most beautiful green areas in Edinburgh.

I start my walk every week at the path that goes past the Blue Goose pub (which used to be the Dell Inn) on Slateford Road (opposite the Water of Leith Conservation Trust Visitor Centre). There is a network of paths running through the Dells and I try to cover as many of them as possible during every visit, though often taking a different route so I get a different perspective on things!

Walking down from the pub, you quite soon come to one of the Ladies Grottos. These were built in the 1750s by the landscape gardener of the Redhall Estate. The idea was that the ladies in the party would rest in a grotto while the gentlemen went hunting. Today they are used as roosts by bats. The grotto in the photo is on the path by a tributary off the main river. 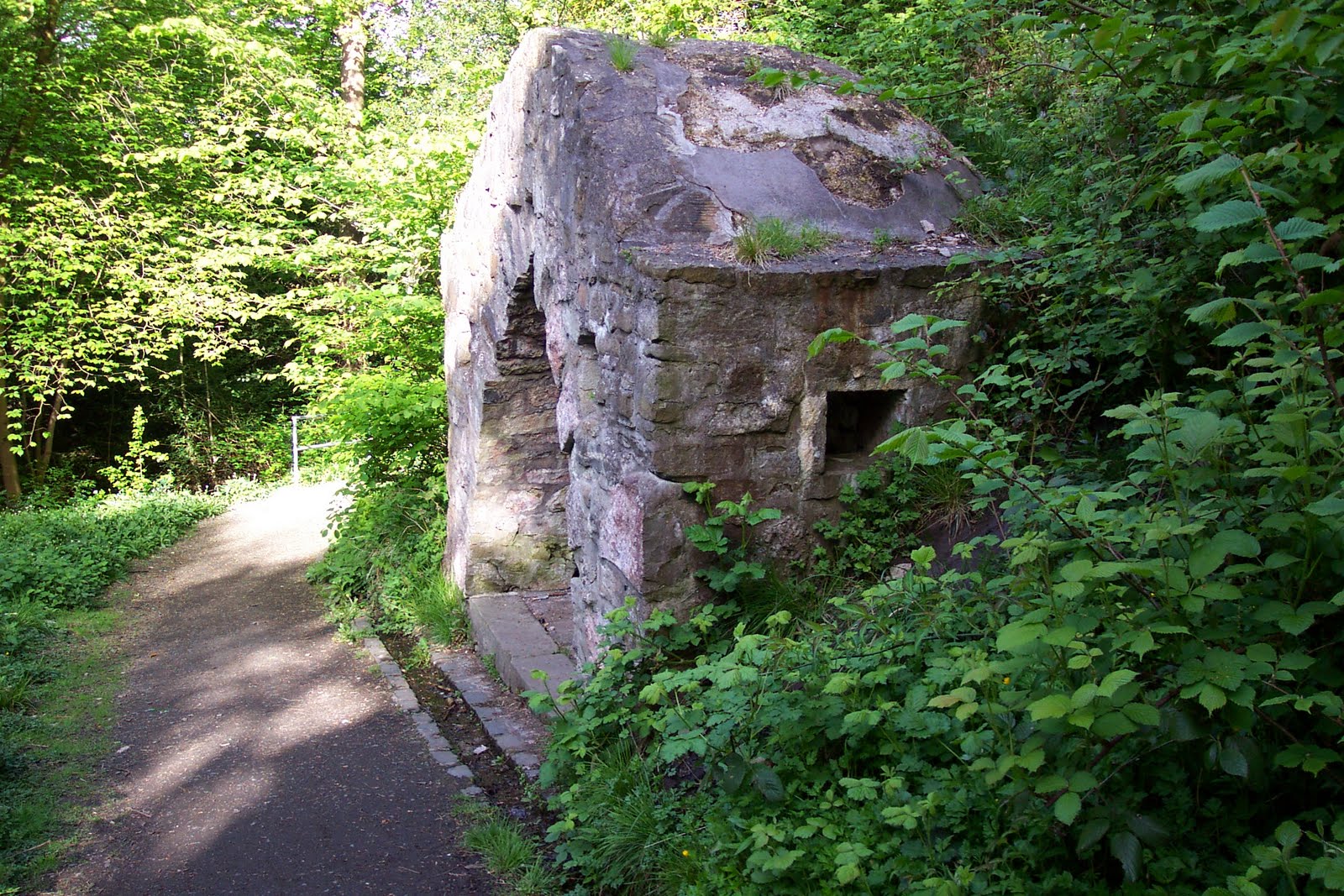 Slightly further on from the grotto you come to a small wooden bridge over the river. I always stop on the bridge, I have been told on good authority that a kingfisher flies under this bridge every day at 10am. It can also be seen at other times!

Having crossed the bridge, I generally take a little detour by walking back downstream along the walls of Redhall Gardens to visit the Hidden Meadow. This is an open grassy area, surrounded by trees, where in summer willow warblers sing and other species of birds too. There's a rabbit warren here too. 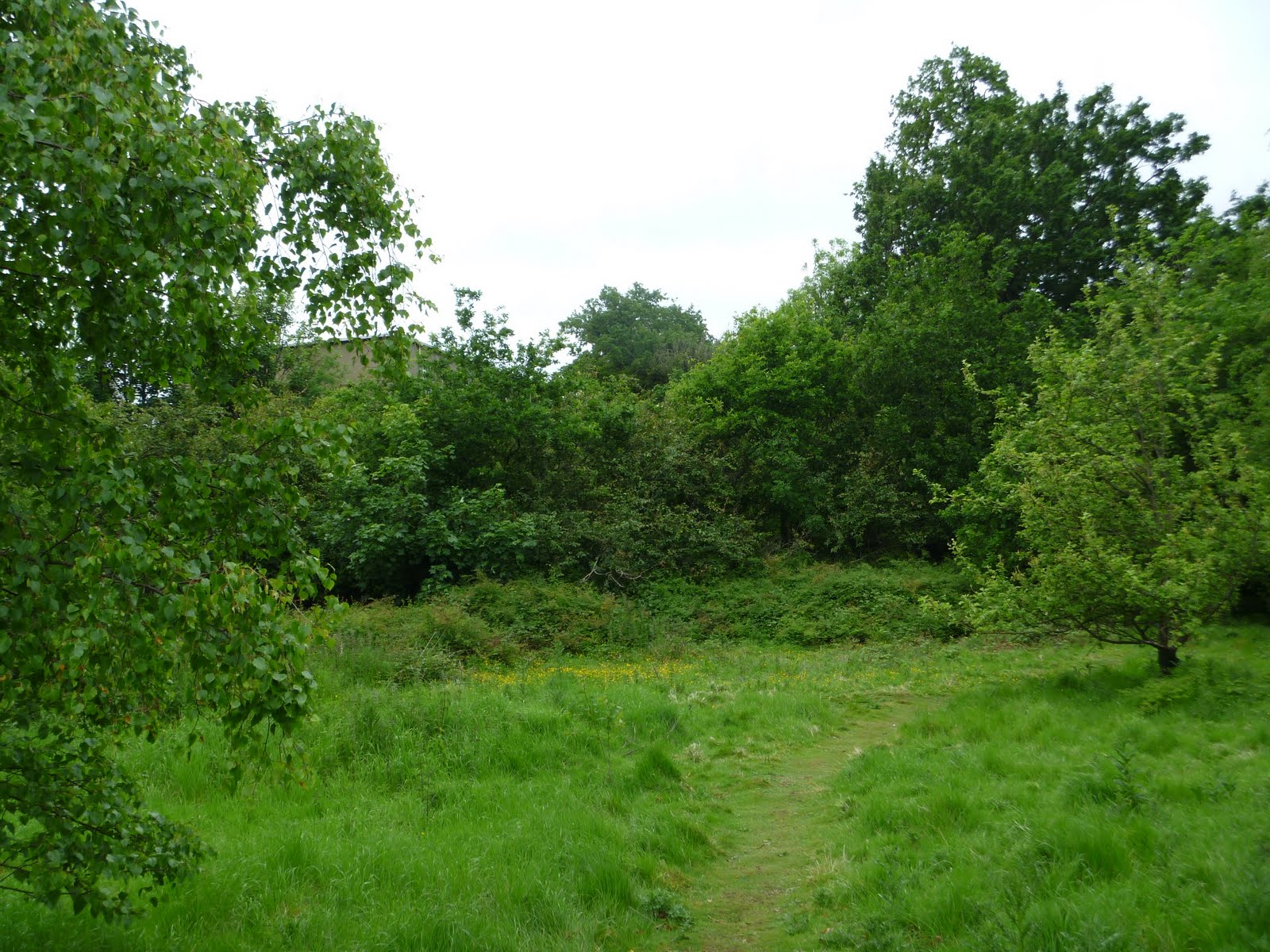 I then retrace my steps and then go past the bridge continuing alongside the Redhall Garden walls. The Redhall Gardens were originally the kitchen gardens for the Redhall House and could be seen from the windows of the house. Nowadays the gardens are used by Scottish Association of Mental Health as a therapeutic centre for people with mental health issues.

Soon after passing the gardens, the path passes alongside an allotment site. This always strikes me as quite a wildlife friendly site, with plenty of bird feeders. I've seen a fox there too, which is not such good news for the birds!

Just upstream of the allotments is Bogs Bridge, an old stone bridge. On the other side of the river from where we're currently walking, there's a small picnic area under a group of hornbeam trees. These trees (which have gorgeous hanging catkins in the summer and autumn) are not native to Scotland and were planted to provide timber for the mills, as they have a particularly strong and hard wood (hence the name hornbeam). 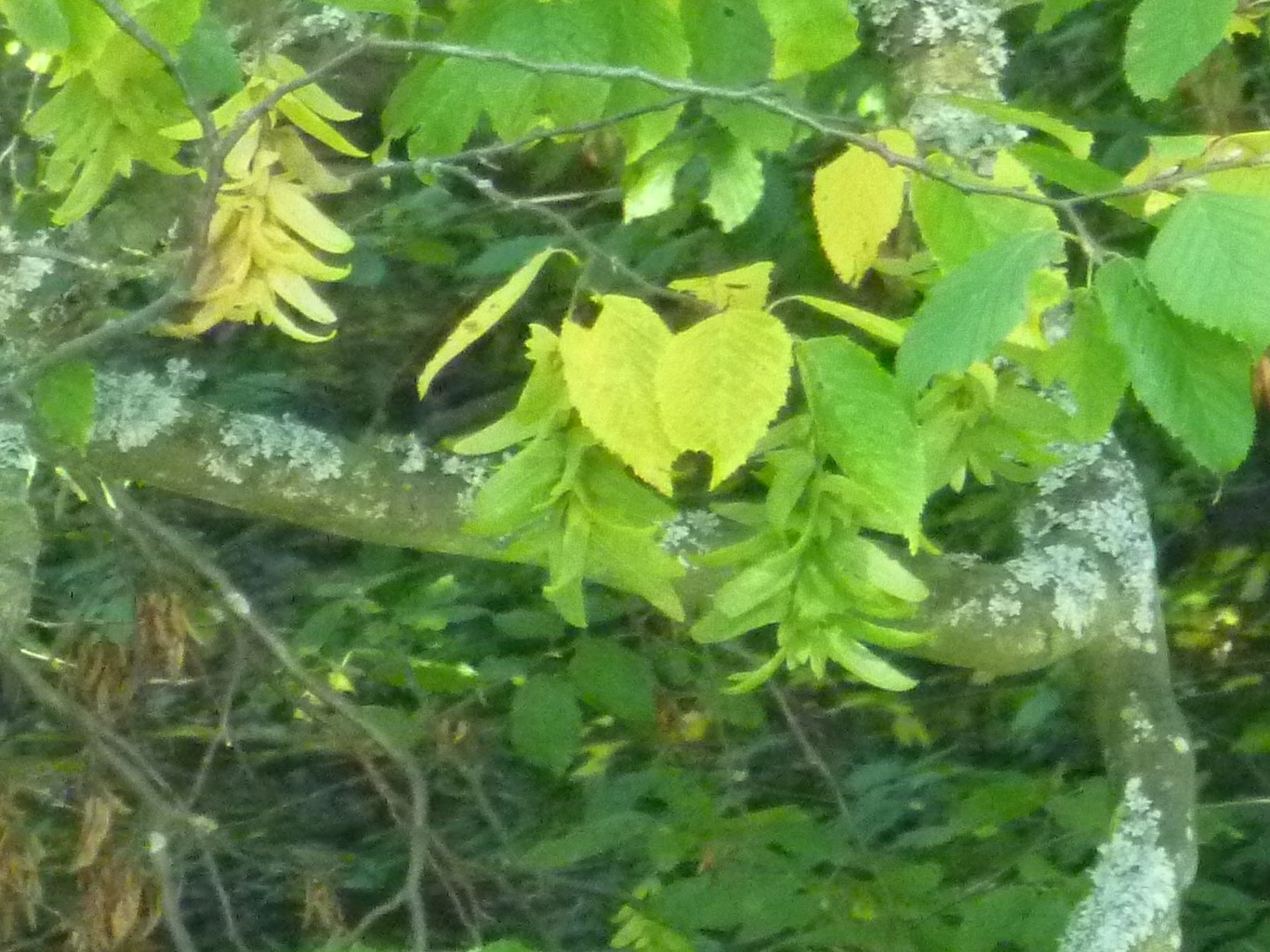 Carrying on along the same side of the river as we were, we come to the site of the old Bogs Mill. In 1735 this mill was making the first Scottish banknotes and had to be guarded by the army! These days it is nothing but an area of overgrown grass. The old mill lade can be seen in the grass and the whole area is being transformed into a wildflower meadow by the Water of Leith Conservation Trust.

Further along upstream the path starts to run parallel with the cyclepath, which runs along the old Balerno to Edinburgh railway line. I always stay on the lower path here as it runs through a prettier route into a wide green open area, where there is a picnic table. At the top of this area is another small bridge where excellent views can sometimes be had of the kingfisher (though no set timing for this one!).

Continuing on upstream the path passes by Kates Mill (once the 20th largest paper mill in Scotland - it's hard these days to imagine that once 71 people lived and worked here!). The mill itself is no longer there but the mill house is now a private residence. Close by is Redhall Mill, which still has a very clear lade runs alongside the river upstream of the mill buildings.

Past these mills we soon reach Colinton Weir which we cross with a strong wooden bridge. 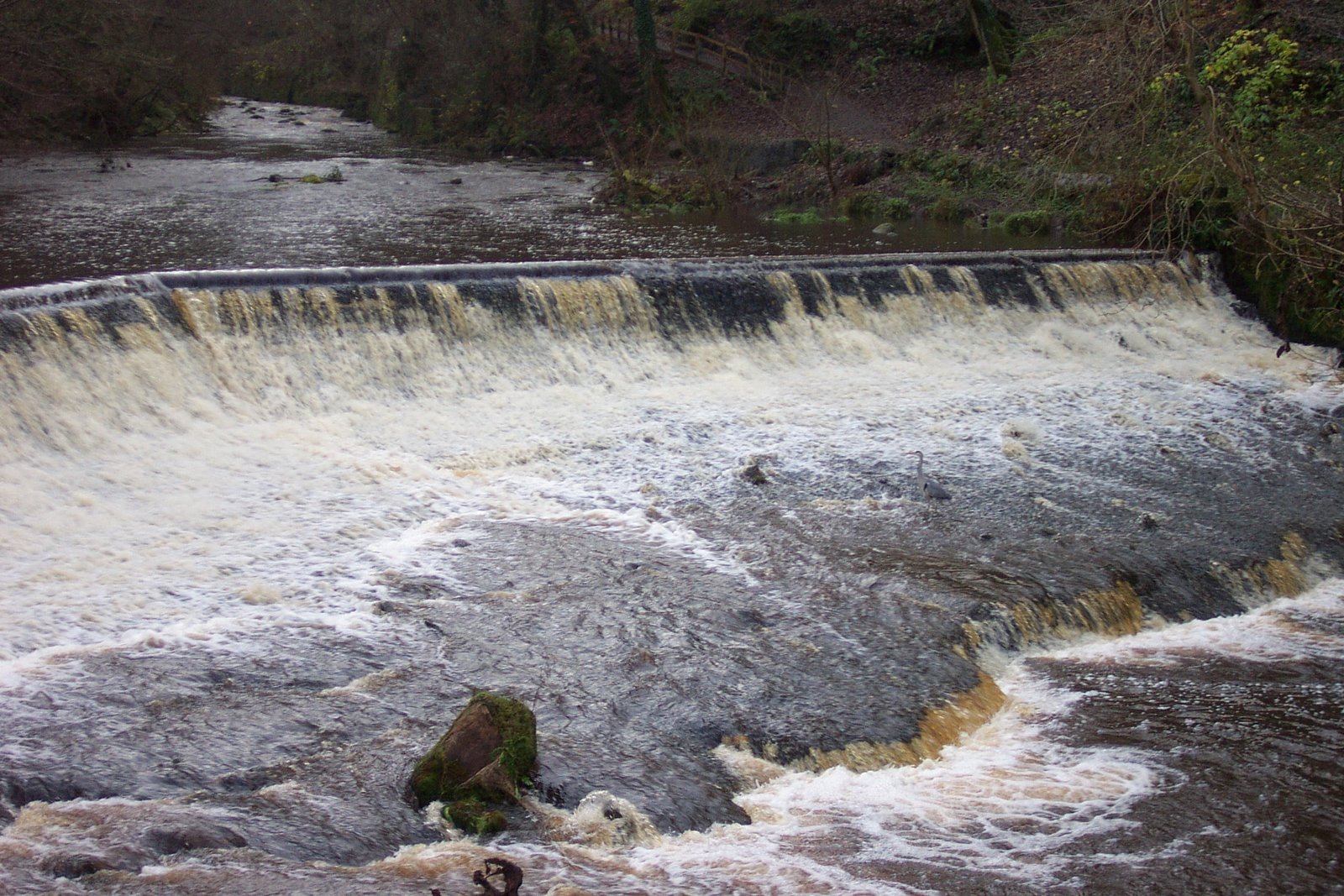 The path continues alongside the river, although steps take you up to the cyclepath as an alternative route. I generally stay by the river and have been rewarded with excellent sightings of roe deer here as well as river birds.

This part of the river feels particularly secluded as the banks are very steep and covered in trees. In spring the undergrowth here (as in most of the Dells) is a mass of wild garlic 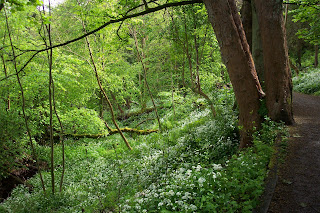 Soon the path becomes a stairway, which leads to Colinton Village. This is a very pretty village, one of the oldest villages around Edinburgh, now part of the city itself. There is a nice pub for a lunch break should you want it! The walk could stop here, but generally I then continue through Spylaw Park. There is a very high stone bridge over the river here, carrying a major road. Underneath the bridge is the remains of some form of mill workings.

Once through Spylaw Park this is where I join the cyclepath and change direction to come downstream back to Slateford. Using the cyclepath here means that i get a different perspective on the river and ensures that i pick as much rubbish as possible (though if there's too much rubbish I report it to the Conservation Trust staff who then arrange for a clean up team to tackle it) The path passes by the old Colinton railway station, which now hosts a carpark, a small display of mill wheels and a newly planted wildflower meadow.

The cyclepath isn't quite as pleasant to stroll along as the lower path nearer the river. In spring though it is loud with birdsong and there is a lovely meadow, just upstream and behind Redhall and Kate's Mills where orchids grow in summer and deer graze. Two weeks ago I saw my first butterflies of the year here, which seemed unbelievable in today's snow and sleet! The photo shows common spotted orchids. 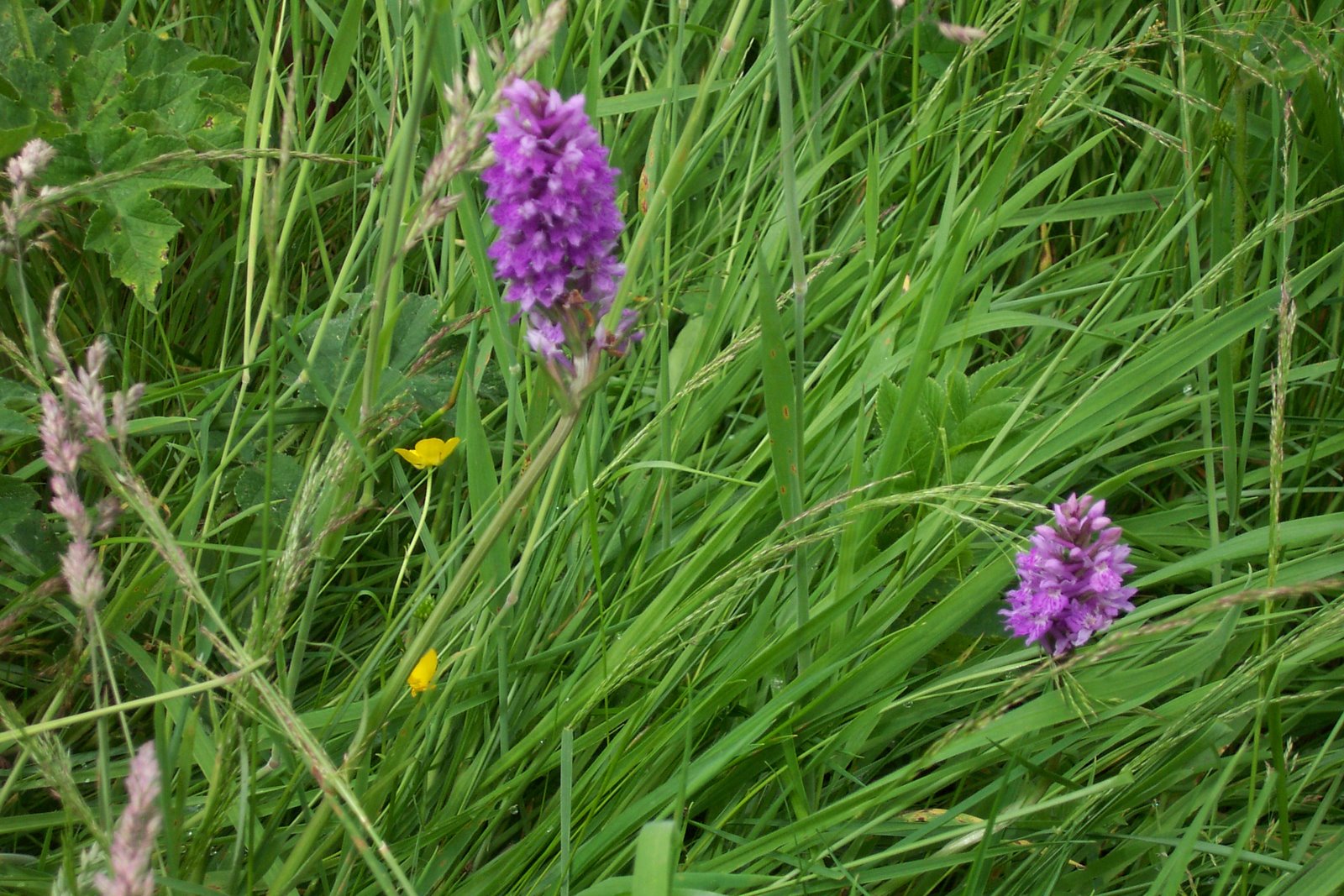 A wee bit further along and there are a number of paths that take you back into the Dells. I tend to turn back into the Dells just downstream of Kate's Mill. I cross over the stone bridge and walk back along the opposite side of the river to that which I walked up. There are a few really nice yew trees dotted along this side of the river. Just before Bogs Mill there is an open area and if you look upwards you see the old Redhall House, which is currently being redeveloped, housing having been built in its grounds in the past few years. This is a good area to see birds of prey and in summer swallows and house martins often swoop round the area.

Just past Bogs Bridge the path splits into two, the lower path goes right by the river and passes a funny little tree sculpture. 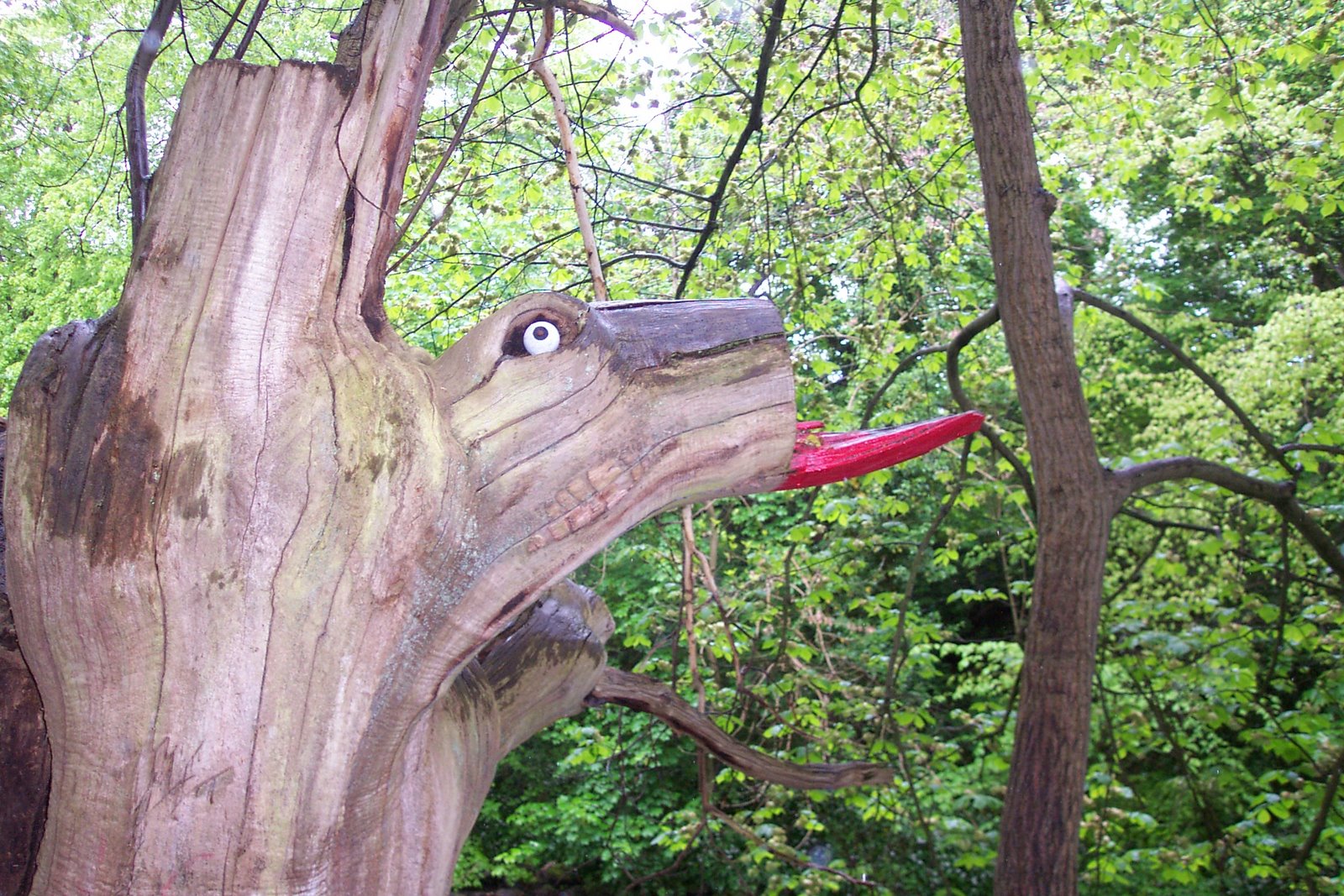 The upper path goes past gorse bushes and hawthorn trees. 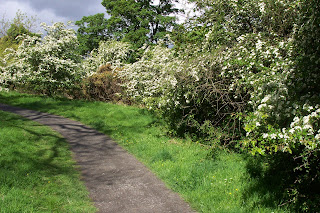 Then its a straight walk back to the beginning!

As I do this walk every week, the photos are a mix, taken at various times of the year.
Click to mark this as a great report. Register or Login free to be able to rate and comment on reports (as well as access 1:25000 mapping).