Continuing my training and preparation for the West Highland Way, yesterday was a trip along the Kelvin Walkway as it's another handy route that's relatively local to me.

After getting the train to Partick station, the route begins a short walk away at the Riverside Museum where the Clyde and Kelvin meet, and is also where the Clyde Walkway and Kelvin Walkways meet. Path is visible here with a walker on it, view from the Clydeside Expressway. Incidentally if you have time I would highly recommend spending an hour or 2 in the museum (booking required at present due to Covid, but it's free, it only costs to park your car), there's some great exhibits on Glasgow transport and life including a recreation of an old street and subway station. 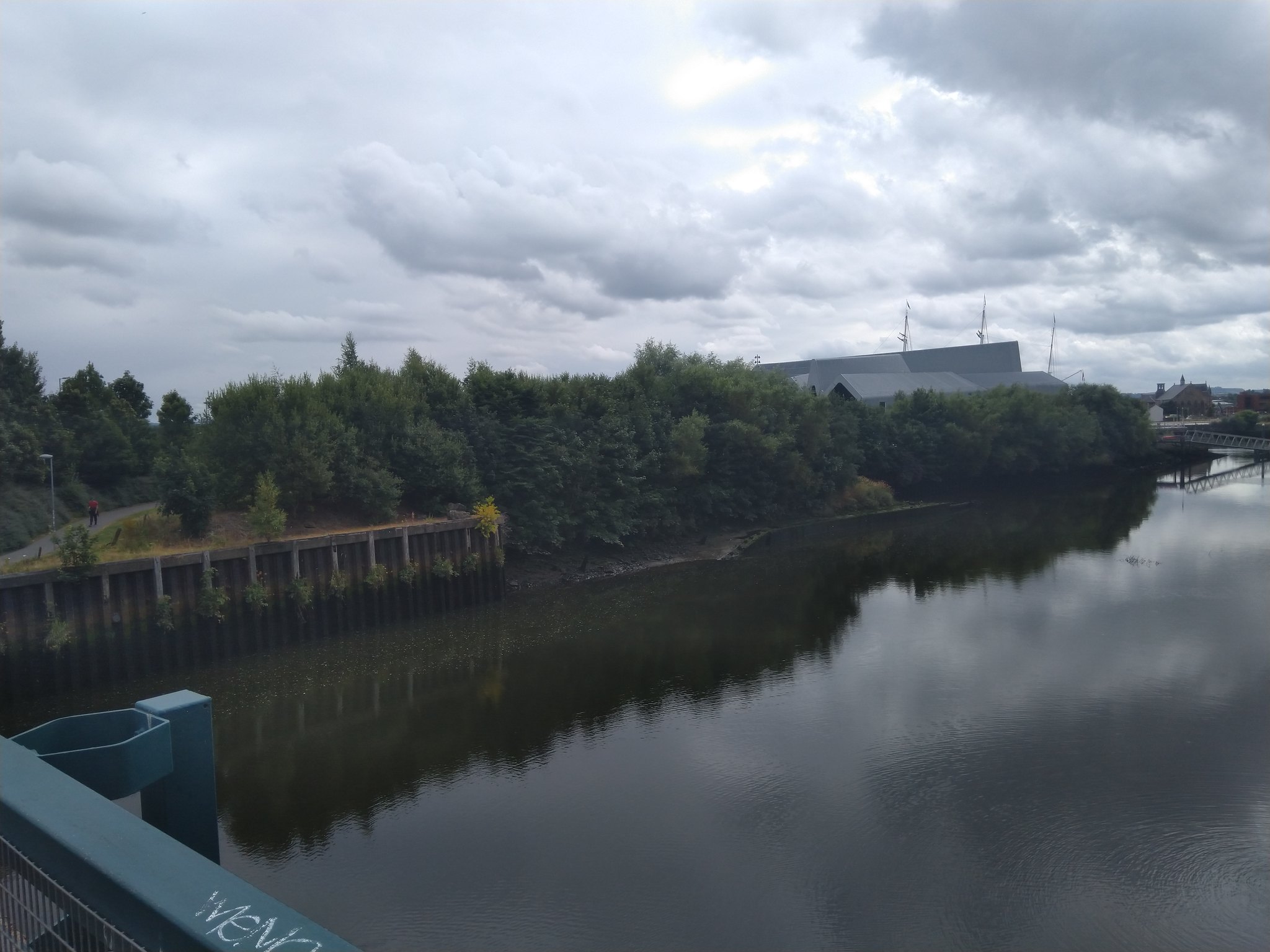 The path takes you under the main road and initially up Ferry Road through a housing estate and along Old Dumbarton Road past a car park, where you can see the first of the (many!) remnants of the Glasgow Central Railway along the path, the bridge below led to Partick Central station. 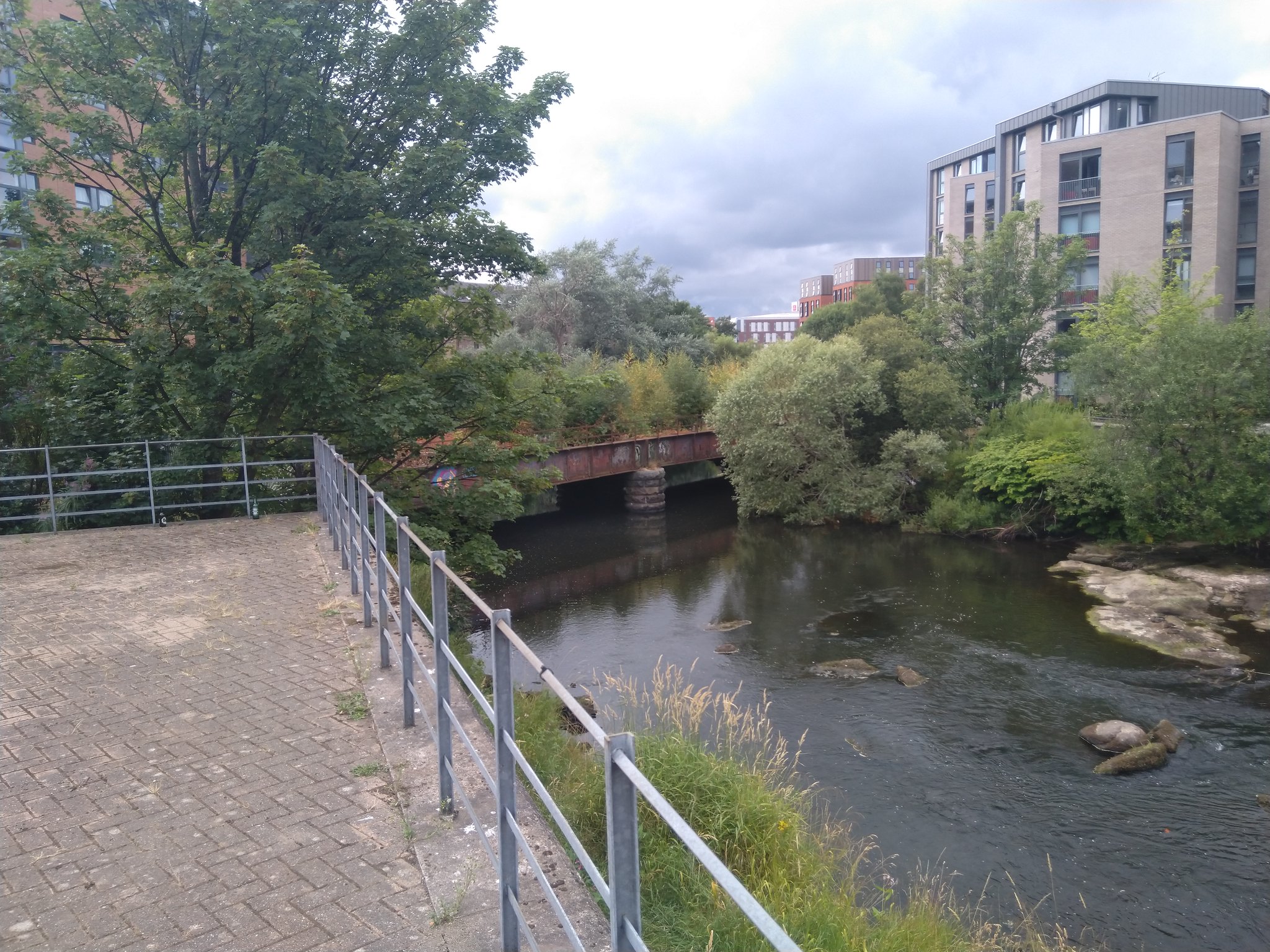 Continuing along takes you over Argyle Street at the bridge pictured below and very close to the Kelvin Hall where you enter Kelvingrove Park and start to feel like you're actually on the walk. 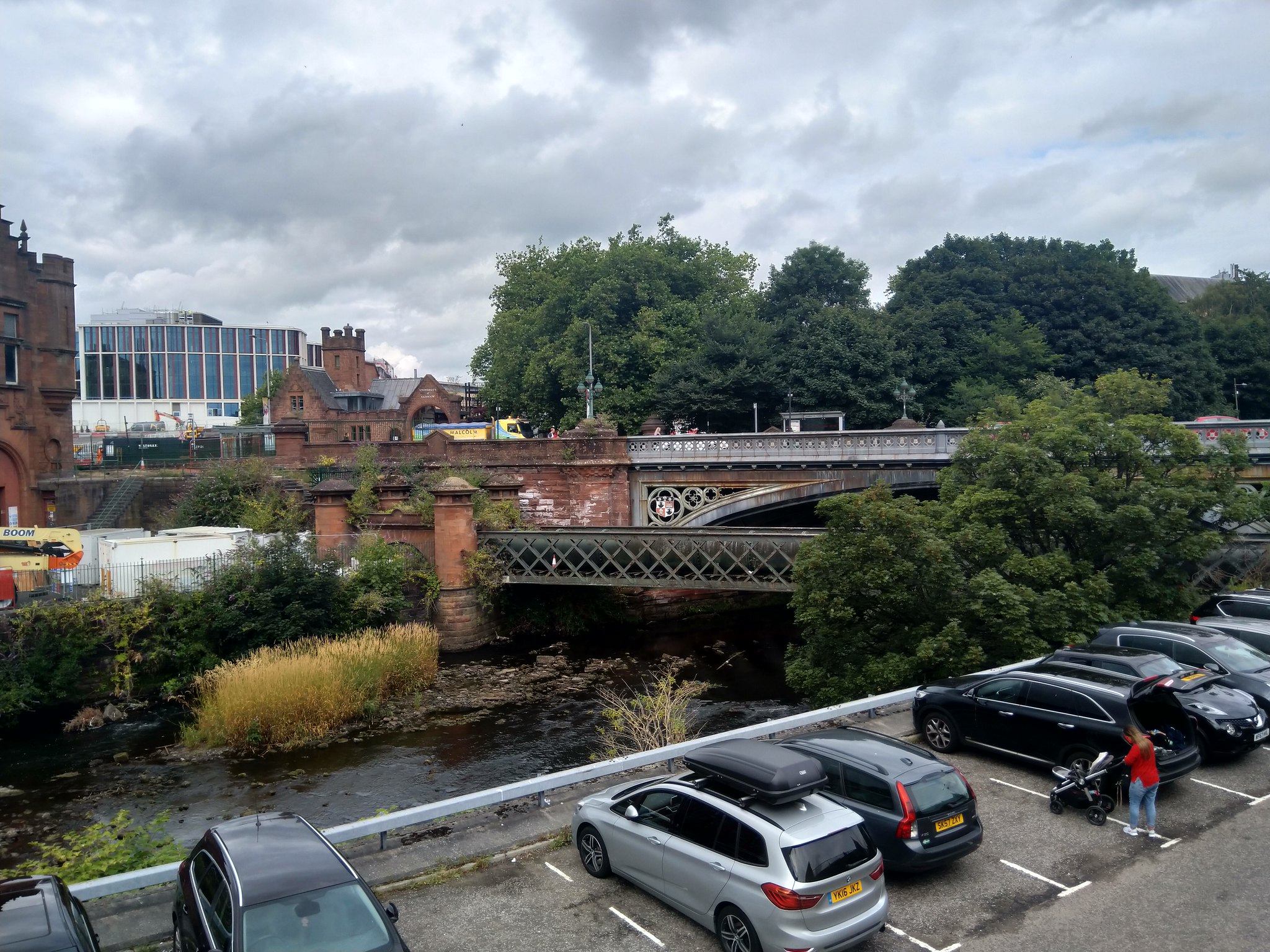 It's now a case of following the river through the park, which was very busy when I was there despite the weather being rather less nice than it has been. It's all wide paved paths through this section so plenty of space for the many cyclists as well. The path crosses the river close to Kelvinbridge Subway Station at the site of what was Kelvinbridge Railway Station. 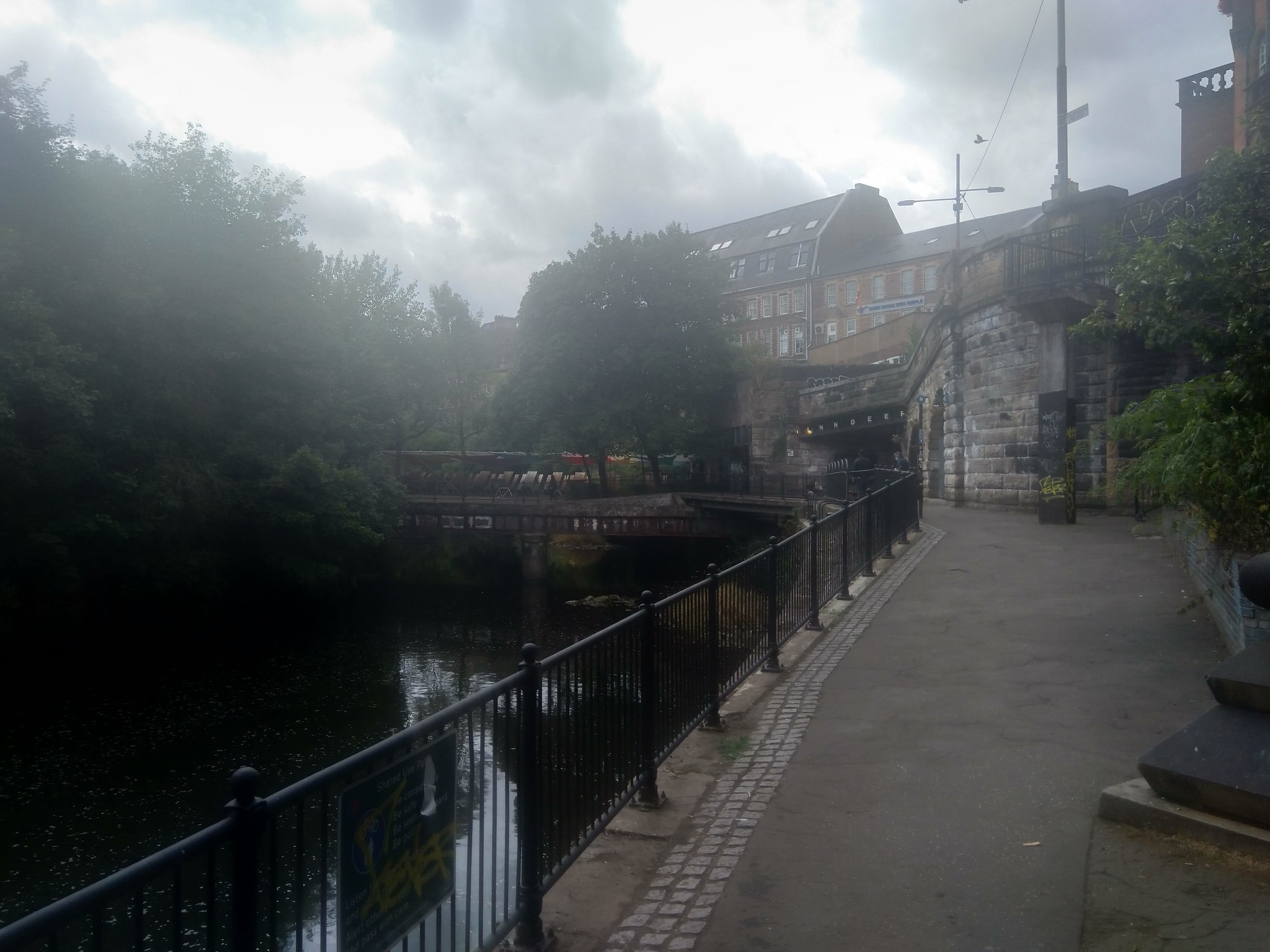 Crossing back over the river you'll see some ruins of a former flint mill, the weir and mill race pictured below used to provide the power to the mill. The bridge in the backgroud of the first picture carries Queen Margaret Drive over the river. 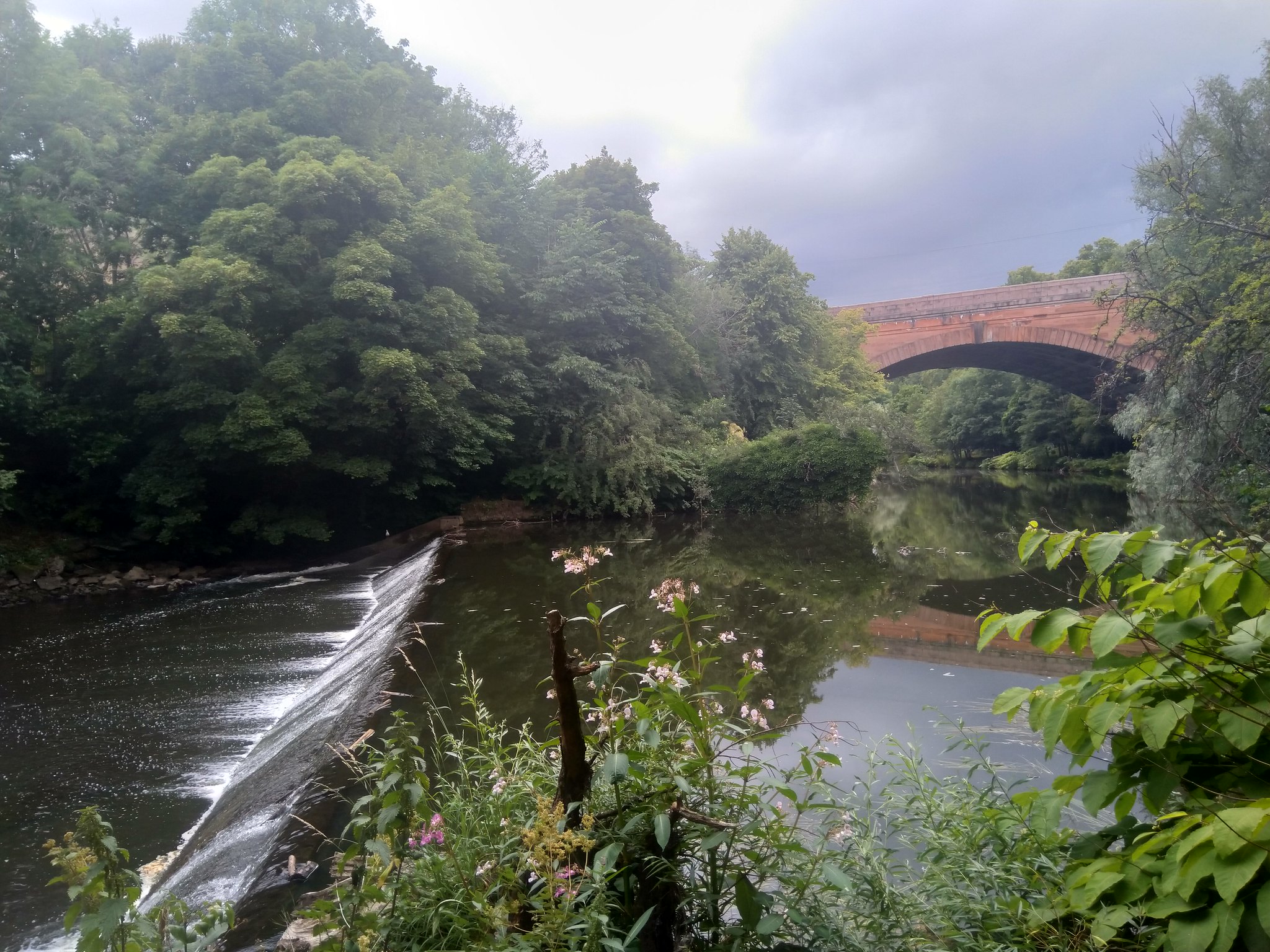 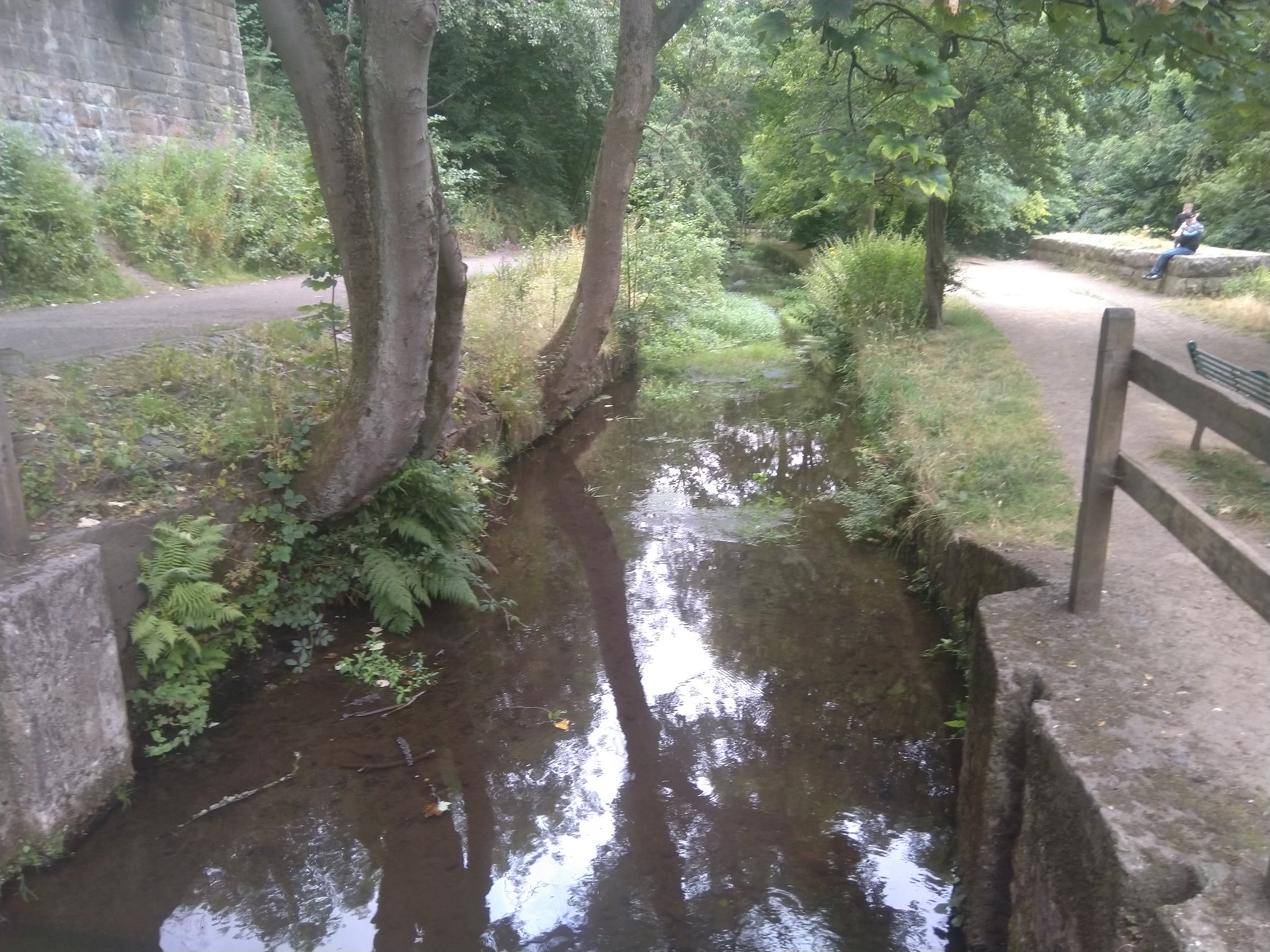 Just beyond this is a pedestrian bridge, the Humpback Bridge, which allows access to Glasgow's Botanic Gardens 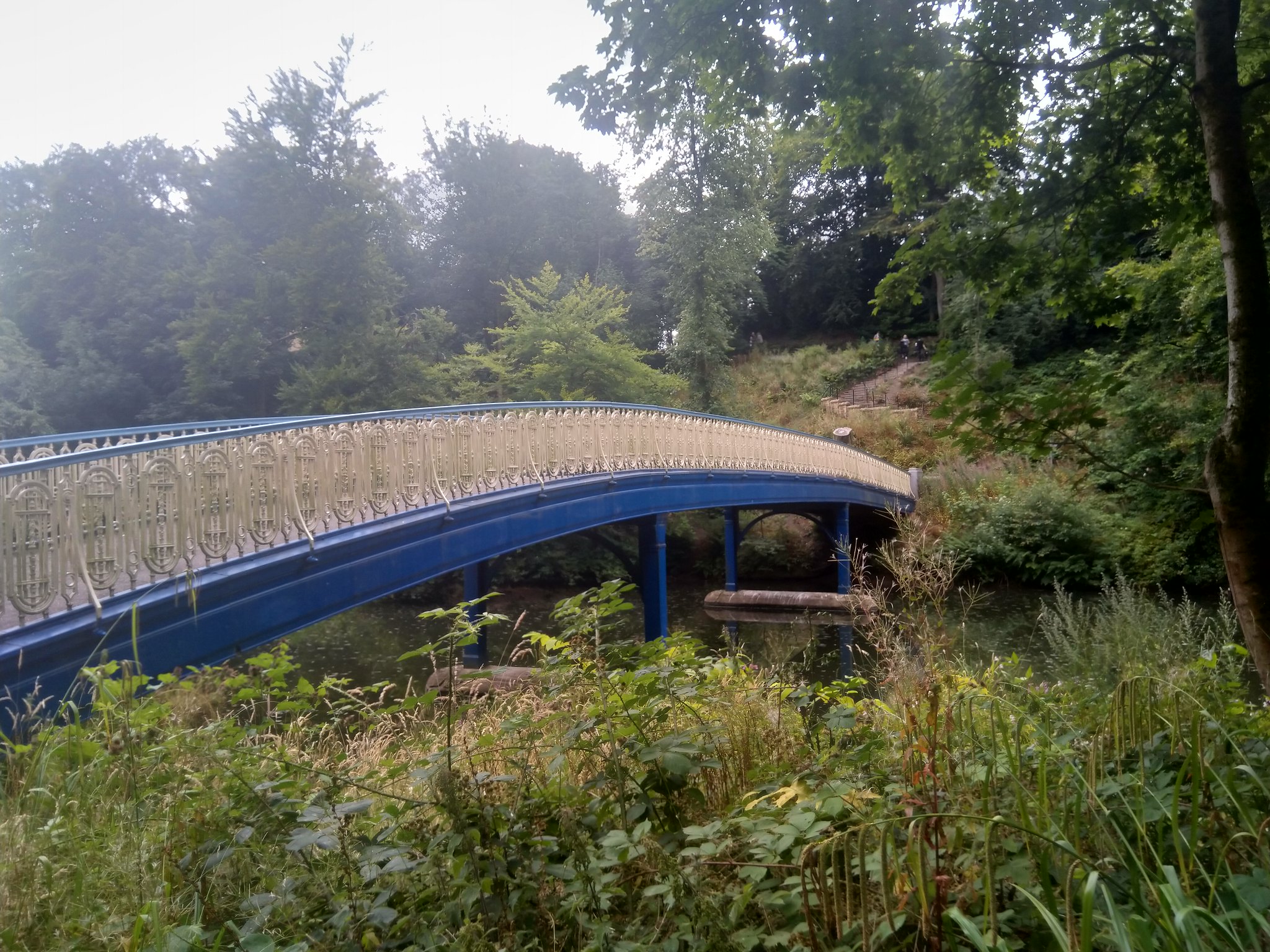 Under yet another railway bridge, this one carried the line in to Maryhill Central, now the site of a Tesco 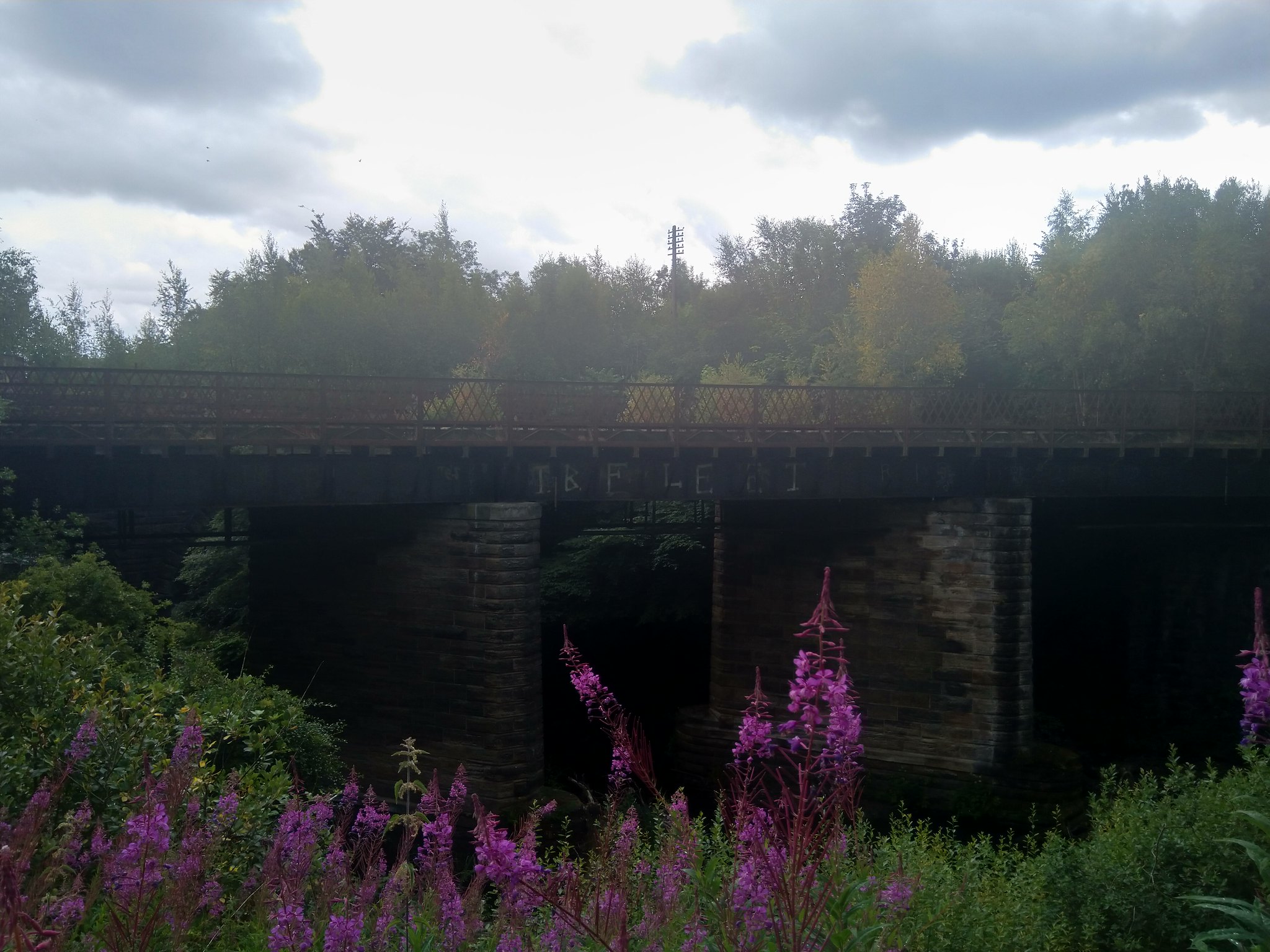 Heading up towards Dawsholm now, there is another weir in the river and the piers of several more ruined bridges and then the Kelvin Aqueduct. This carries the Forth & Clyde Canal over the Kelvin 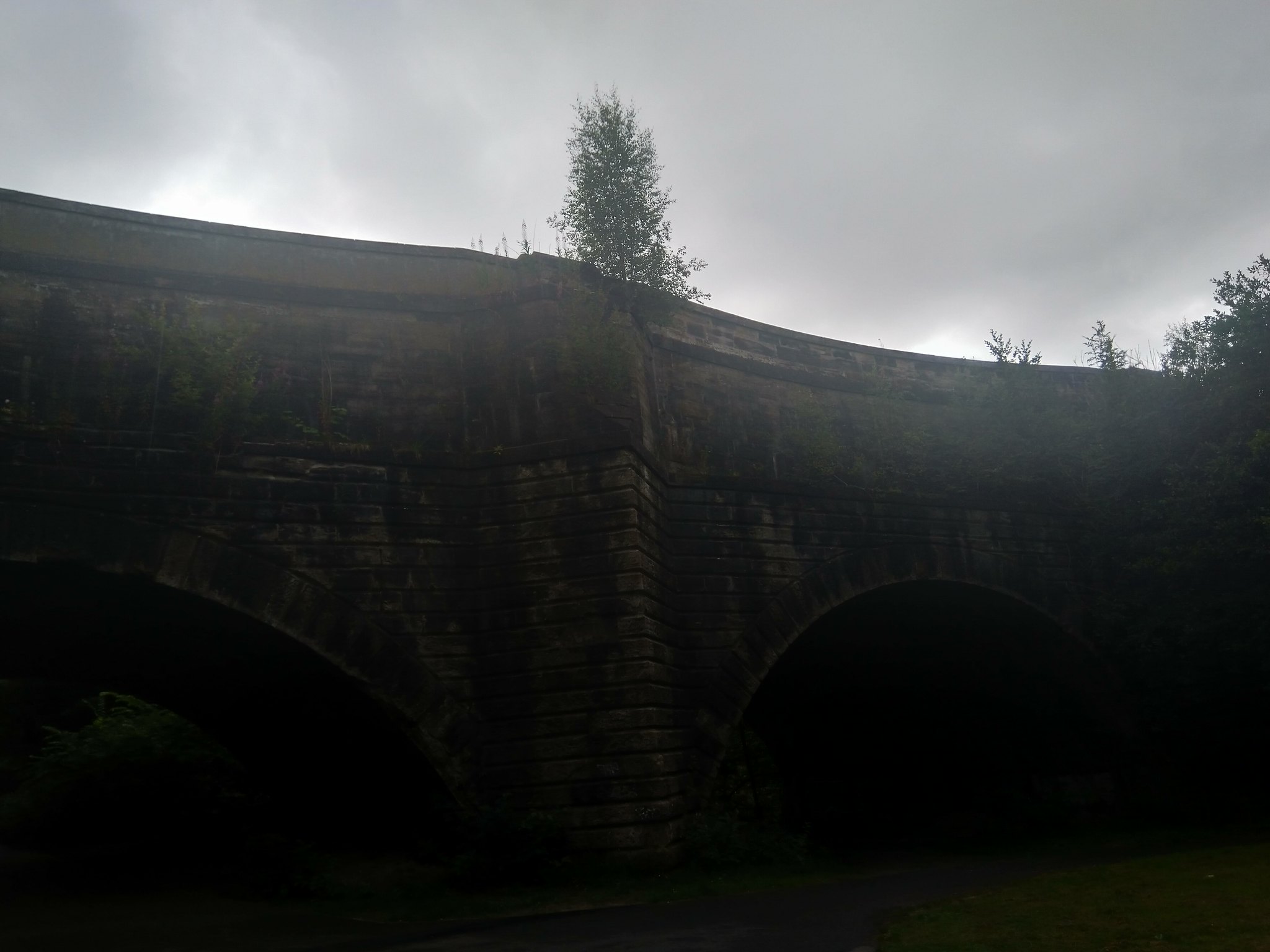 Passing under Maryhill Viaduct (one still in use for a change on this route) is where the first half of the walk ends. The many helpful signs telling you that you are on the Kelvin Walkway and distances to other places end just after this and the route changes dramatically from paths through a park to narrow and often overgrown dirt trails 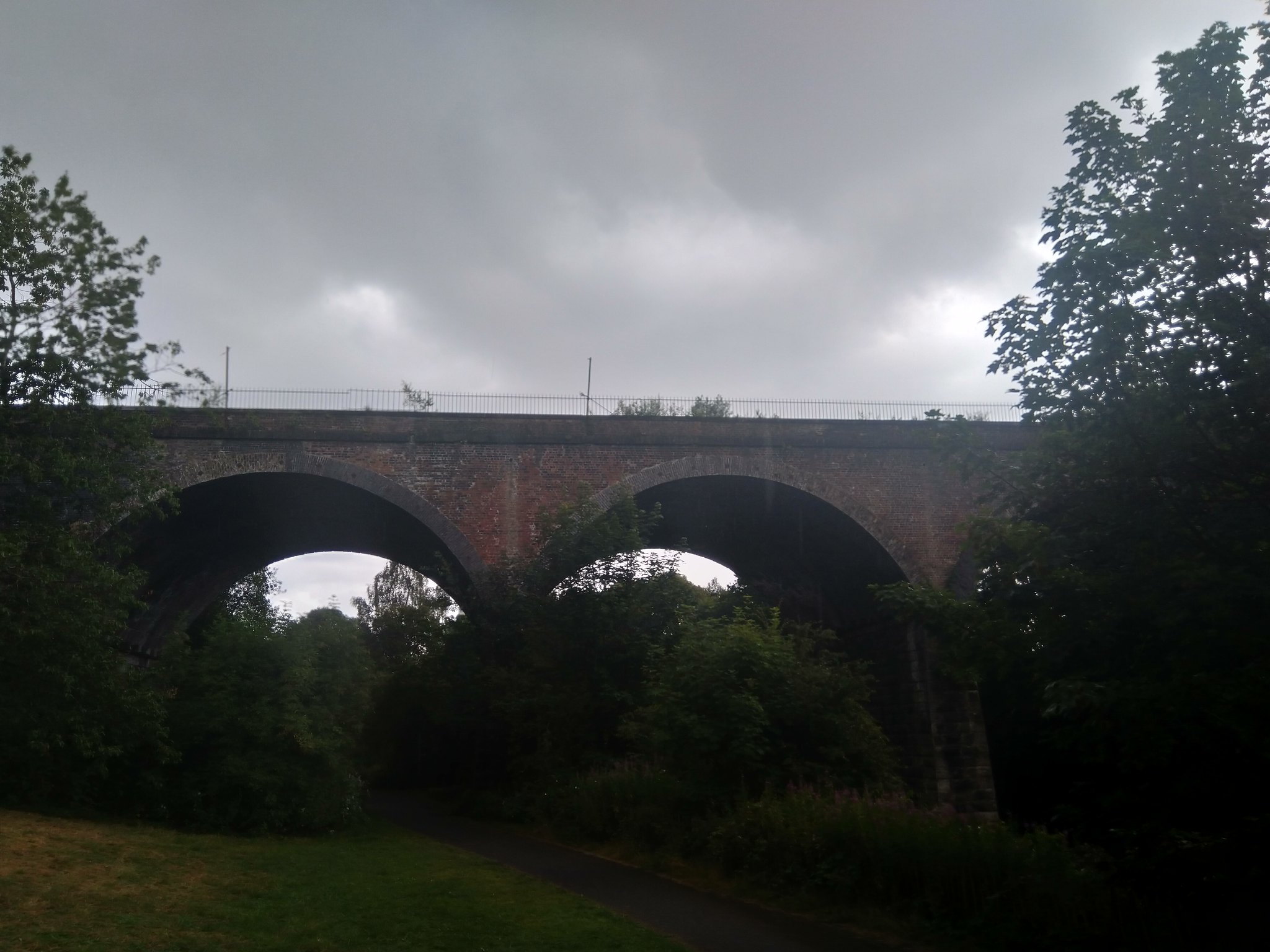 There are 2 options here for abandoning the Kelvin Walkway, one is following the signs at the Agueduct to Maryhill Locks and following the canal towpath back to Port Dundas and the city centre. Alternatively Maryhill Road has frequent bus services back to the city centre as well. If I'd known how dull the second half of the walk is I'd probably have chosen the canal path, and would do so if I do the route again. You'll notice a startling lack of pictures from the second half compared to the first, simply because there was very little to see.

North of the viaduct the path starts to turn right and you can hear the traffic noise from the busy Maryhill Road. As you get close to the road the path immediately turns left back on itself and follows the road for a stretch until you end up in the West of Scotland Science Park Kelvin Campus. Turn right and there's a gate to the main road on your right just ahead. Now you have to cross the road (traffic lights at the roundabout) to reach the Todd Campus and head on through there to continue the route.

Enter the Todd Campus and veer right at the mini-roundabout through the Science Park. Near the end is a small convenience store if you need supplies, the route is entirely rural until Milngavie from this point, and given the smell and colour of the river plus the extensive work being done by Scottish Water all along the route I wouldn't be drinking anything that came out of it personally, filter or not.

Past the shop and some pitches the path is obvious. However there is an unsignposted left turn to take to get back to the river. I missed this and carried on to the end of the path at a school. If you do this carry on left past a riding school and there is another path down to the river, although watch your feet as it's both wet and obviously used by the riding school as well (why aren't horse owners required to clear up their much nastier mess like dog owners are?). Turn right at the end of the path at the river and rejoin the walkway.

Much of this section is narrow and overgrown, and given the rain meant getting wet. Apart from a cyclist at this point, who had stopped, I didn't see a single person on the trail from this point until Milngavie. After a bit of a slog thorugh the wet undergrowth the path leaves the river slightly and the trees give way to a field meaning easier going. Back through some trees and the path is maintained again, with wooden borders and a wide path through the woods to the A879.

Were there a pavement on this road I'd recommend taking it and skipping the next section. You'll cross back under the road about 1.2km north, however the meander of the river means you walk about 2.5km. This is the most overgrown section of the path, so I got soaked again through here. The guide on this site also warns of the path being very close to the river, it seems to have been reprofiled since then as after the first few minutes it moves away from the river and next to a fence. Nothing to see of the river and an empty field. About half way round this loop is the merge of the Kelvin and Allander Water, the later of which is what the route follows in to Milngavie.

After passing back under the A879 you reach a minor road which must also be crossed. The guide on here says go straight across and over the crash barrier and back to the path. However this is the last heavily overgrown section (another soaking, thankfully my Peter Storm trousers dry quickly) and Google maps shows the official entrance to the Allander Walkway a bit further up the road just before a Dobbies Garden Centre. There's a random bridge here, it's fenced off and despite looking like a railway bridge there's no sign of a route in the area,

From here you're essentially on what feels like a canal path. It's straight and flat, not too overgrown, but pretty dull again. The only thing of note was what looked like a stampede. I saw a pair of cows running across the field, followed by a full herd. Unfortunately my camera barely picked it up but they were either (optimistically) chasing a pair of deer, or just running after them. Honest there are 2 deer in the highlighted area! 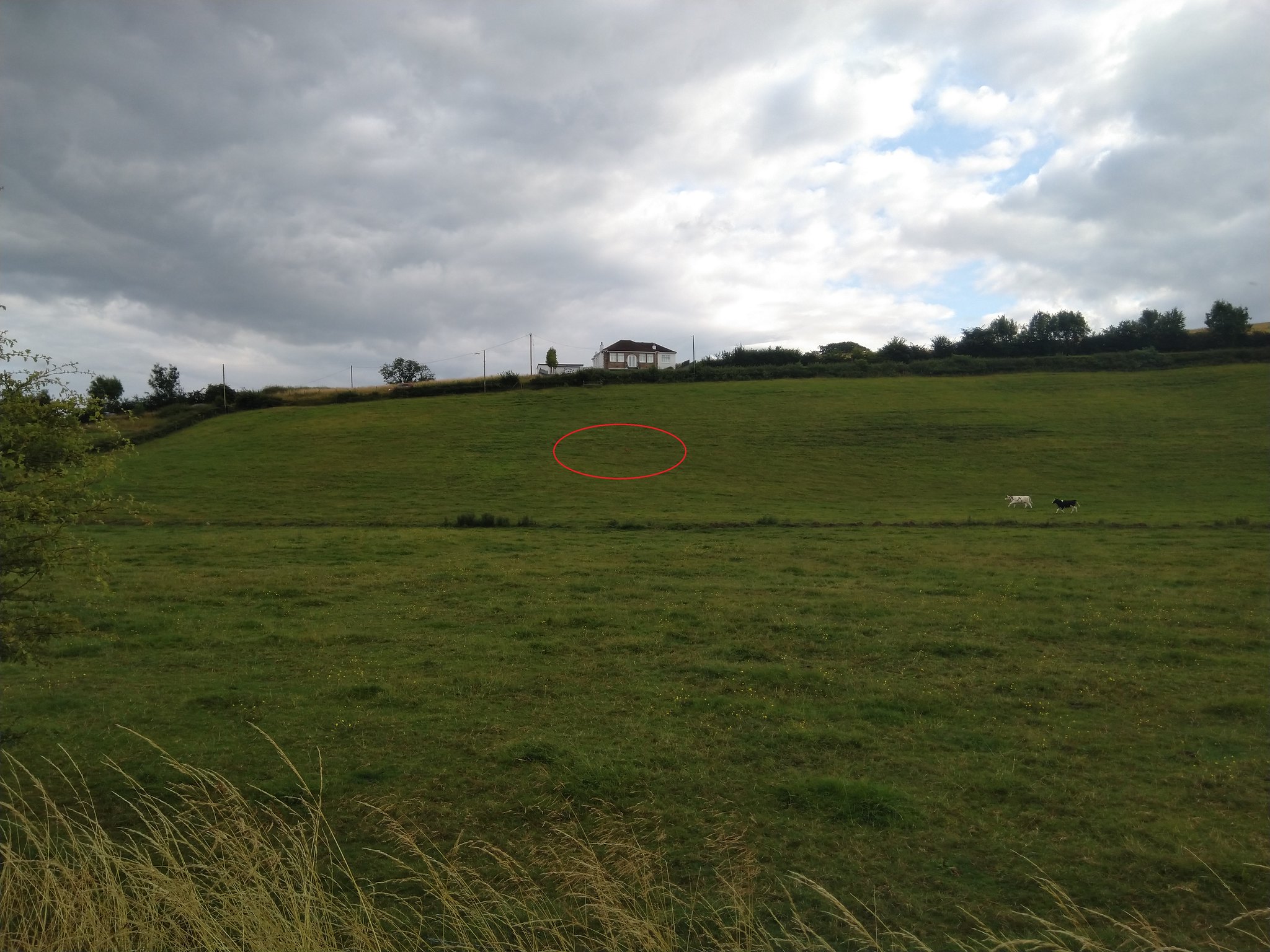 At the end of this section you reach a golf course, and a wooden bridge takes you back over Allander Water. A plaque on the bridge is dedicated to Sgt Jim Prescott, who was killed during the Falklands War. The path changes back to paved and you pass beside the railway on your left and the Rangers FC training centre on your right. There was a diversion in place when I was there so instead of crossing the railway I continued past the tennis courts to the main road. Left here, then right and past an Esso Petrol Station and the station is signposted where I stopped to get the train home. Not far past the station is the centre of Milngavie and the start of the West Highland Way.

Whilst it got me out and put some more miles in the legs, I personally wouldn't recommend the second half of this route. There's very little to see, it's very overgrown in places, so whilst it's good that it's there to link up the Clyde Walkway and West Highland Way, I much preferred the first half and would go back down the Forth & Clyde Canal towpath if I was doing it again.
Click to mark this as a great report. Register or Login free to be able to rate and comment on reports (as well as access 1:25000 mapping).