Clyde Walkway Stage 5 - worth the whole walk for the Falls

And so we reach the end, my first long distance route completed. Eagle-eyed readers will have spotted that I actually ended Stage 4 early by finishing at Kirkfieldbank. It was however always my intention to do the Falls of Clyde circuit rather than the "classic" route to complete the walk, as the bus back to Hamilton (up the Clyde Valley via Larkhall) runs from Kirkfieldbank. Anyone getting public transport from Lanark would be better finishing at New Lanark as suggested by the guide.

I'm also rather mixing the routes, because although I did the full circuit I started at the car park at West Lodge, which is the start point for the hidden side route. This was purely because Kirkfieldbank is a small village and the only parking is on the road, and there isn't always much of it available. I found the car park easily enough using the GPS co-ordinates given in the guide, but the road is poor and very narrow and not well suited to low slung cars!

Last recommendation before we get to the actual report - this is probably a route best done outside summer time if weather permits. Although it was a lovely day everything is in full bloom and so views are often obscured a bit, even at the viewpoints, and there is nothing that could be done about this unless someone has a jetpack to trim the trees in the valley, even if anyone wanted to as the whole area is a nature reserve. There are lots of spots to wild camp on the hidden side as it's pine woodland, but be very careful in choosing a spot as there are lots of downed trees and hanging "widowmakers" around.

Being a nature reserve though, the trail is better kept and properly signed and waymarked (for the most part) than Stages 1-4 are, at least on the New Lanark side. 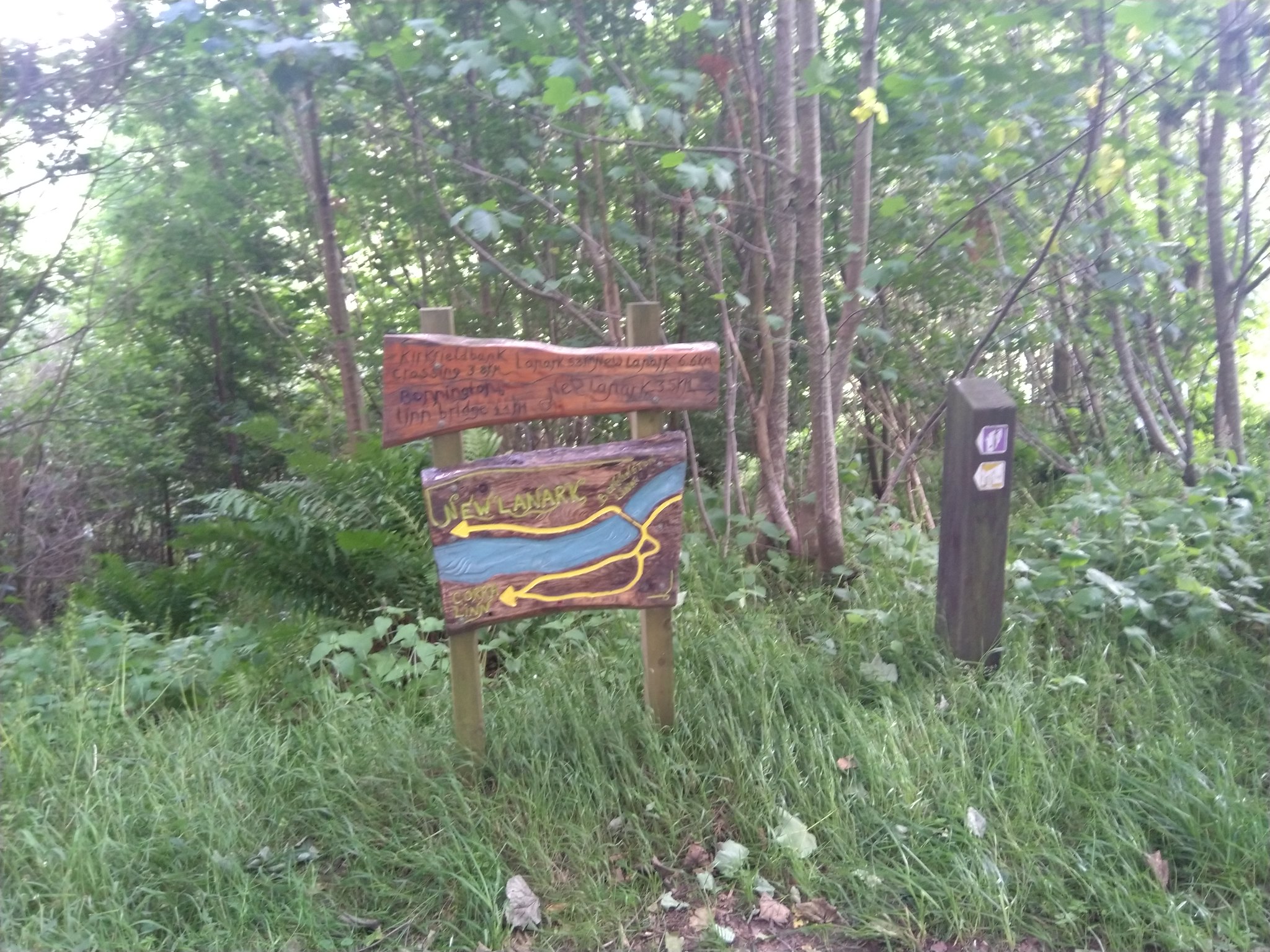 Proper waymarking unlike most of the trail

From West Lodge there's a short walk on a Forestry Road (paths around here can sometimes be closed off due to Forestry operations but are usually only short-term) before reaching the path, and almost immediately you start to hear the roar of Corra Linn. The path is well above the valley floor and the river for much of its route, but there are frequent viewpoints on both sides. 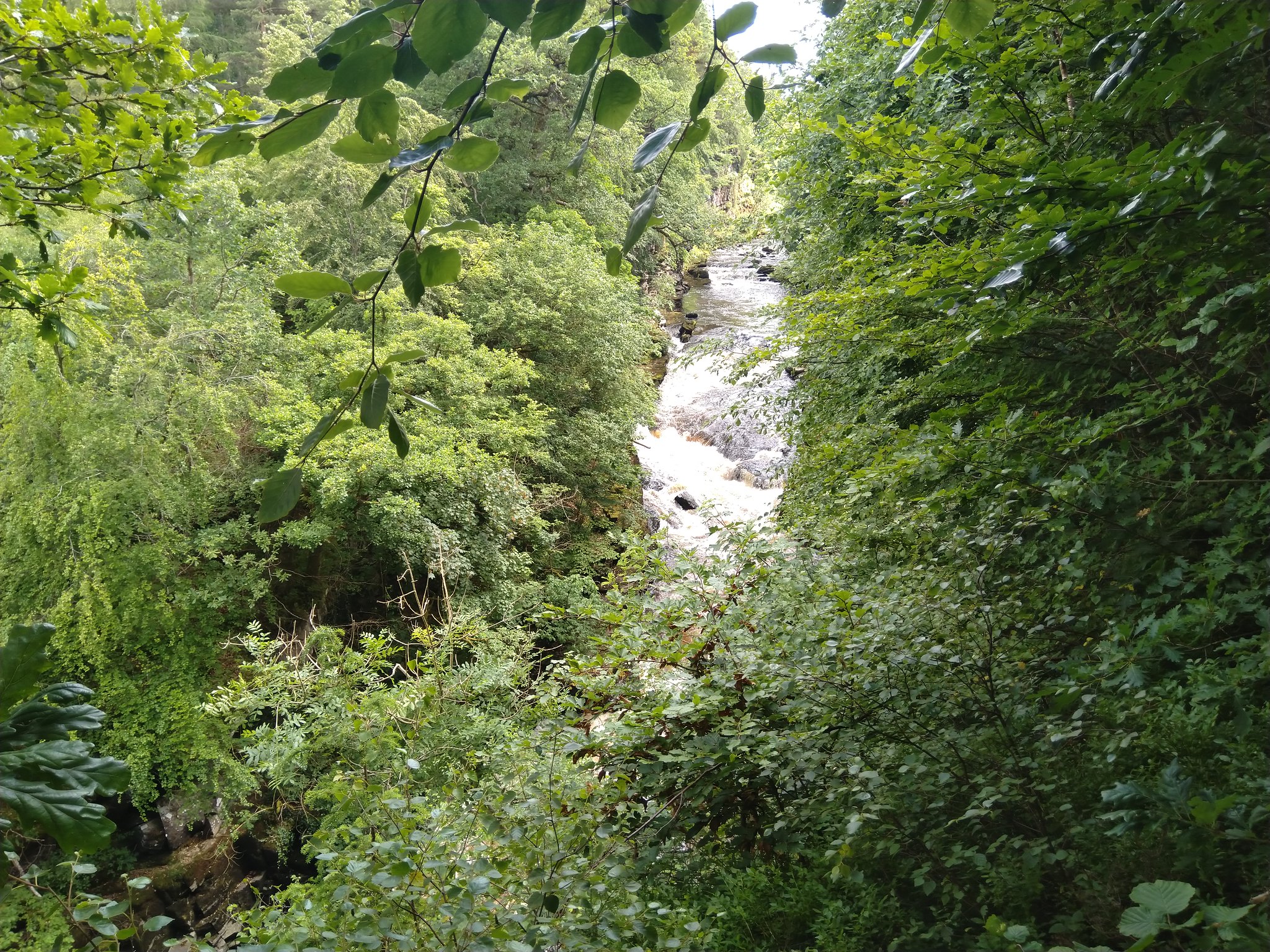 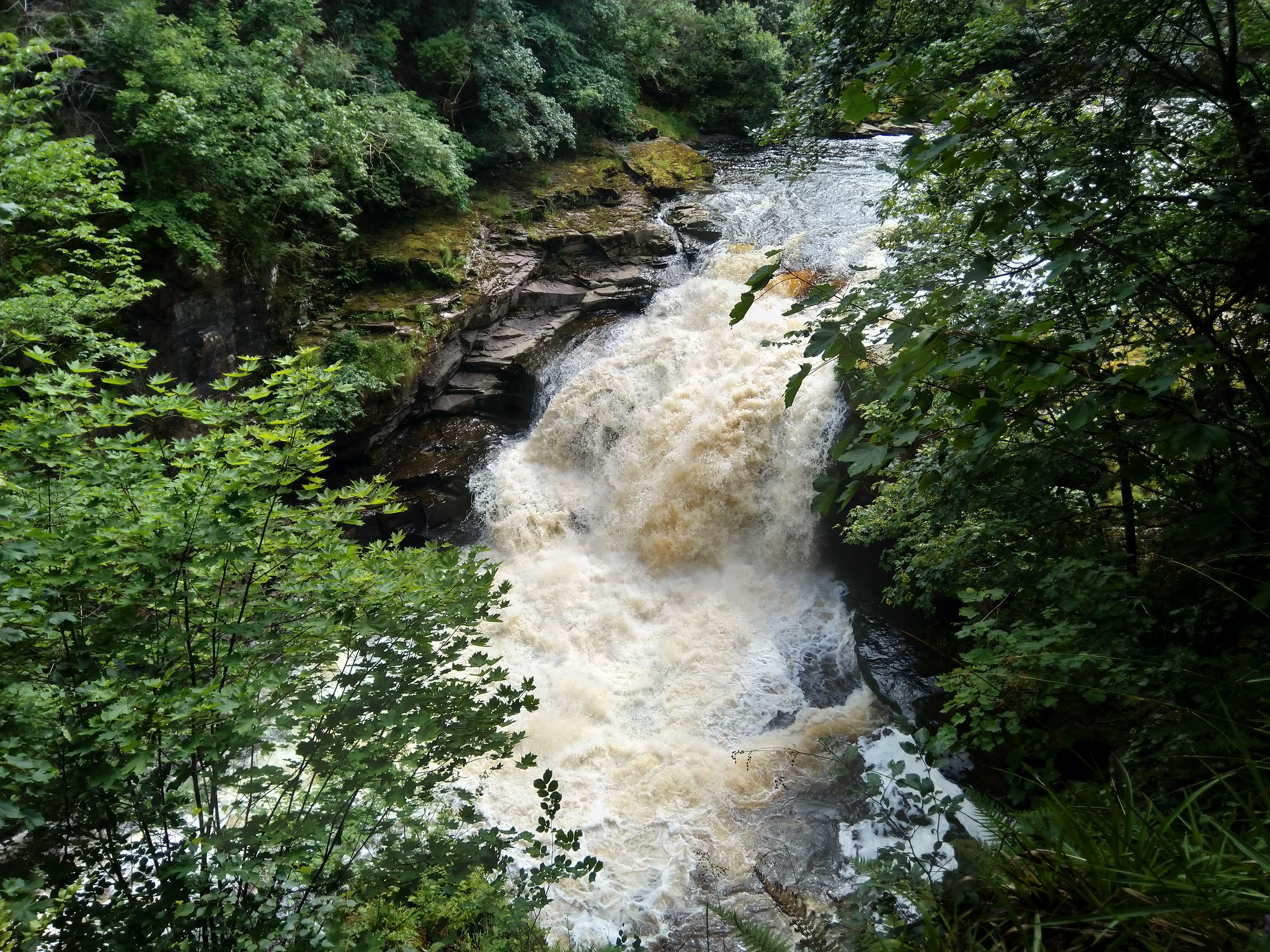 It's also at this point that I have to say photos do not do the Falls justice, whilst Stonebyres Linn (on Stage 4) is almost entirely hidden by trees and Dundaff Linn is pretty small, Corra Linn and Bonnington Linn are spectacular and the sound is a large part of that as well. 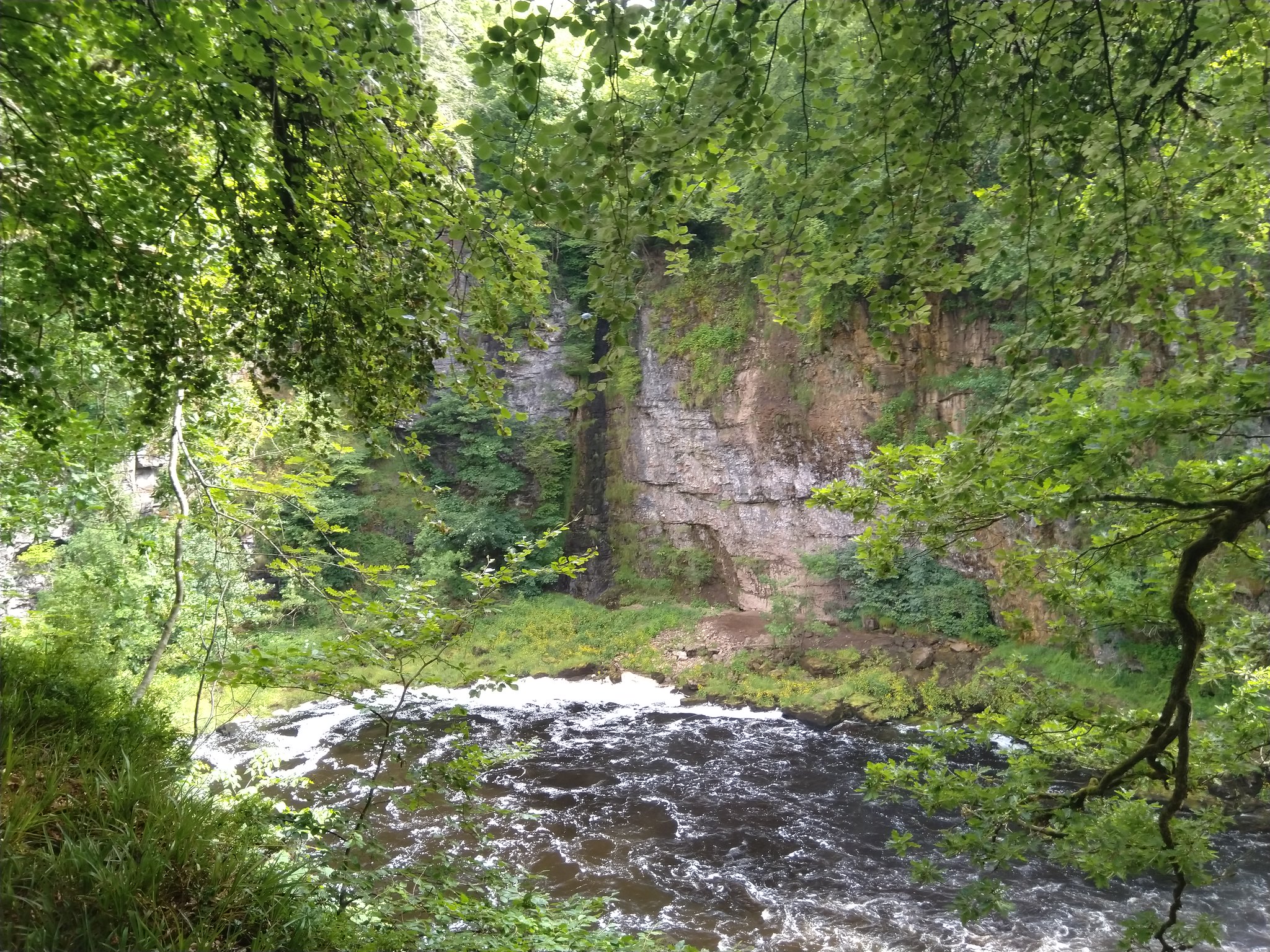 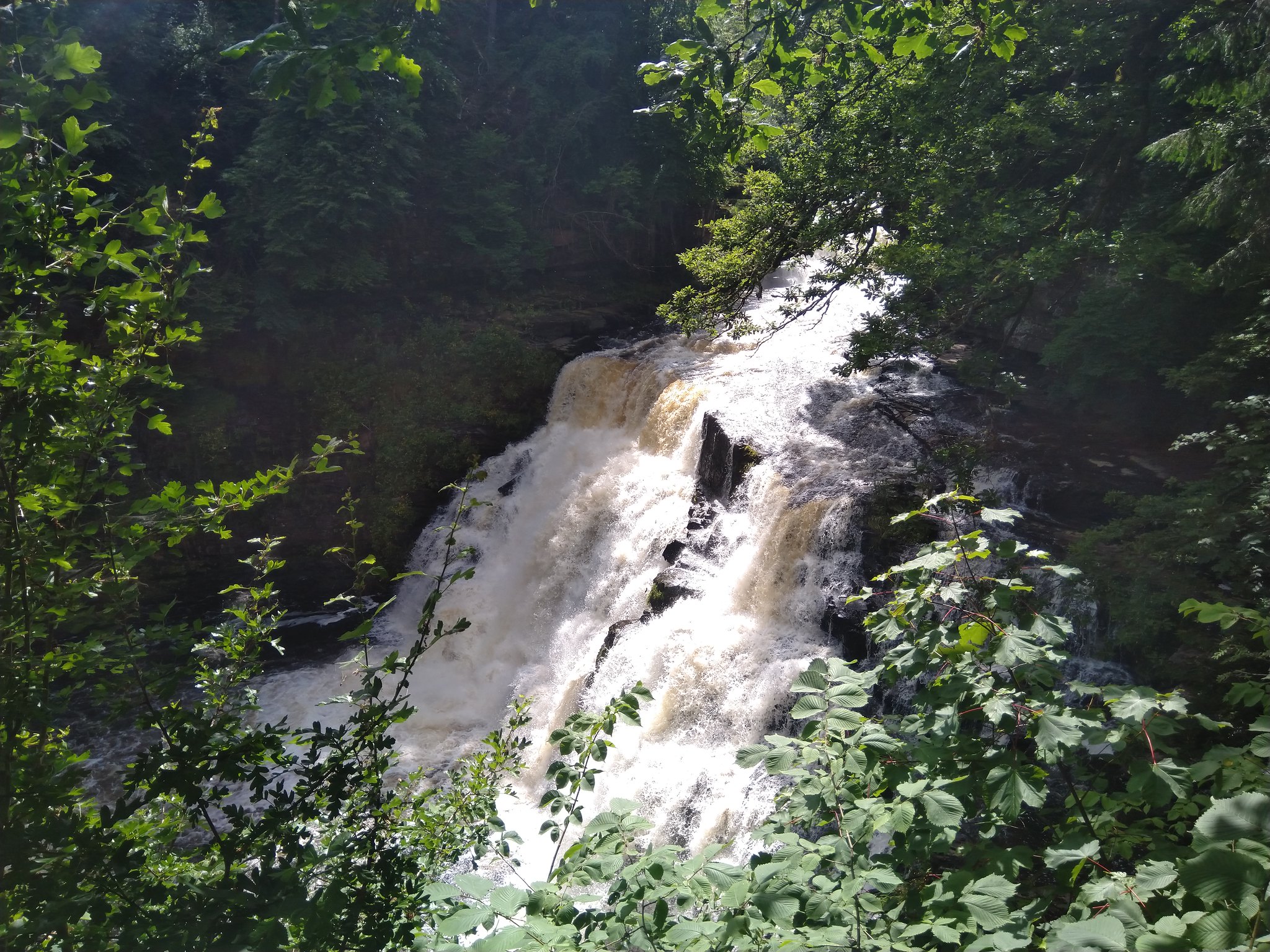 I headed left towards Kirkfieldbank so that I would end at Bonnington Weir, where the classic route would turn and return to New Lanark. Whilst the paths on this side are nice to walk on, being mostly pine woods and so like being on a carpet, they are muddy in parts and there are a LOT of downed trees. Ducking under or climbing over them was a common occurrence - this side of the trail is obviously not as promptly cleared as the classic side. 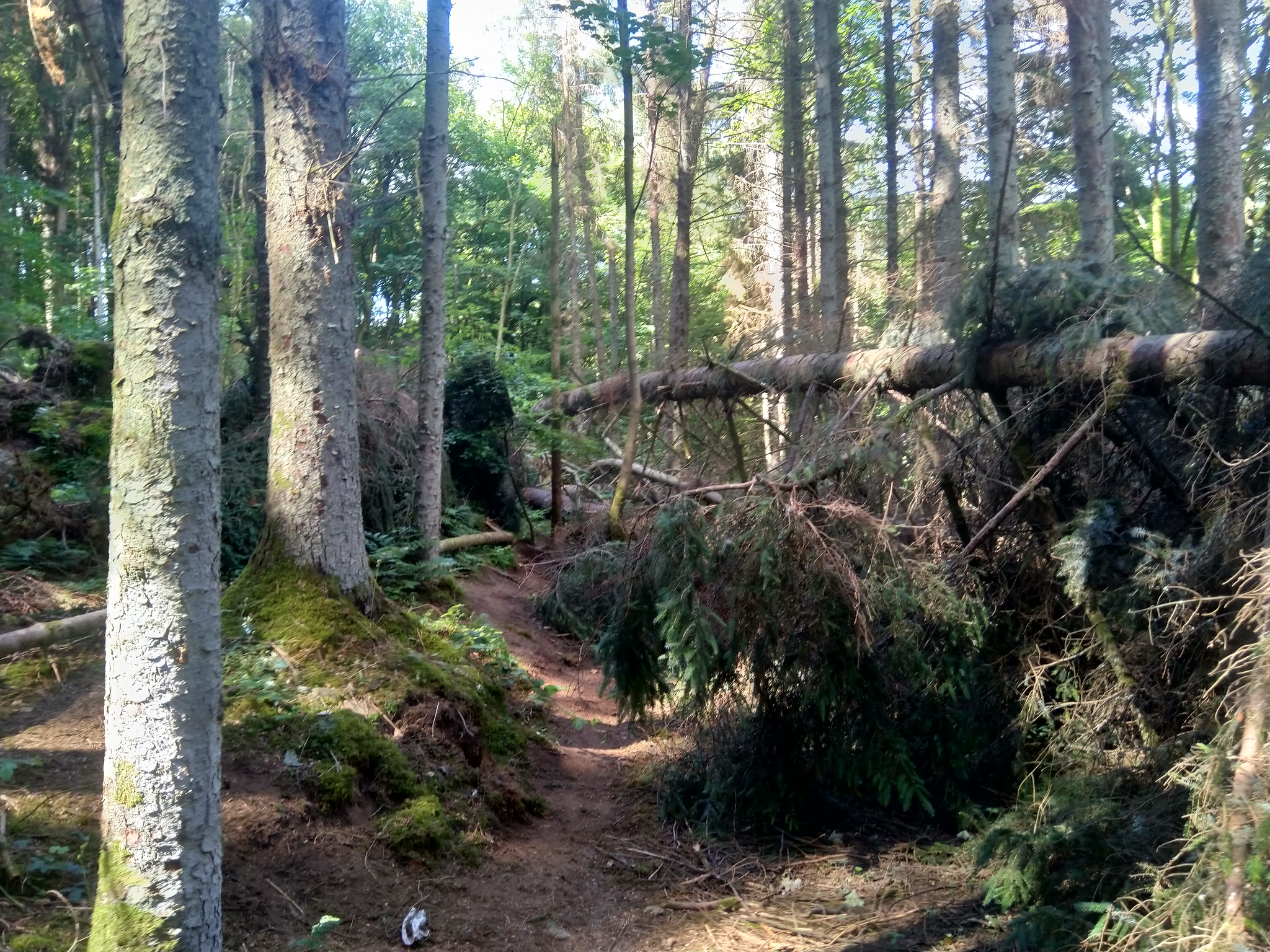 Around 4km in to the route the path emerges at Kirkfieldbank and then there's a short section on the pavements before reaching Clydesholm Bridge (parallel to the road bridge) to cross the Clyde. If you are starting in Kirkfieldbank and want to go the opposite way from me head about 250m up Kirkfield Road and you'll see an arch on the left with 2 large bits of tree stump blocking it to vehicles which is the start of the path. 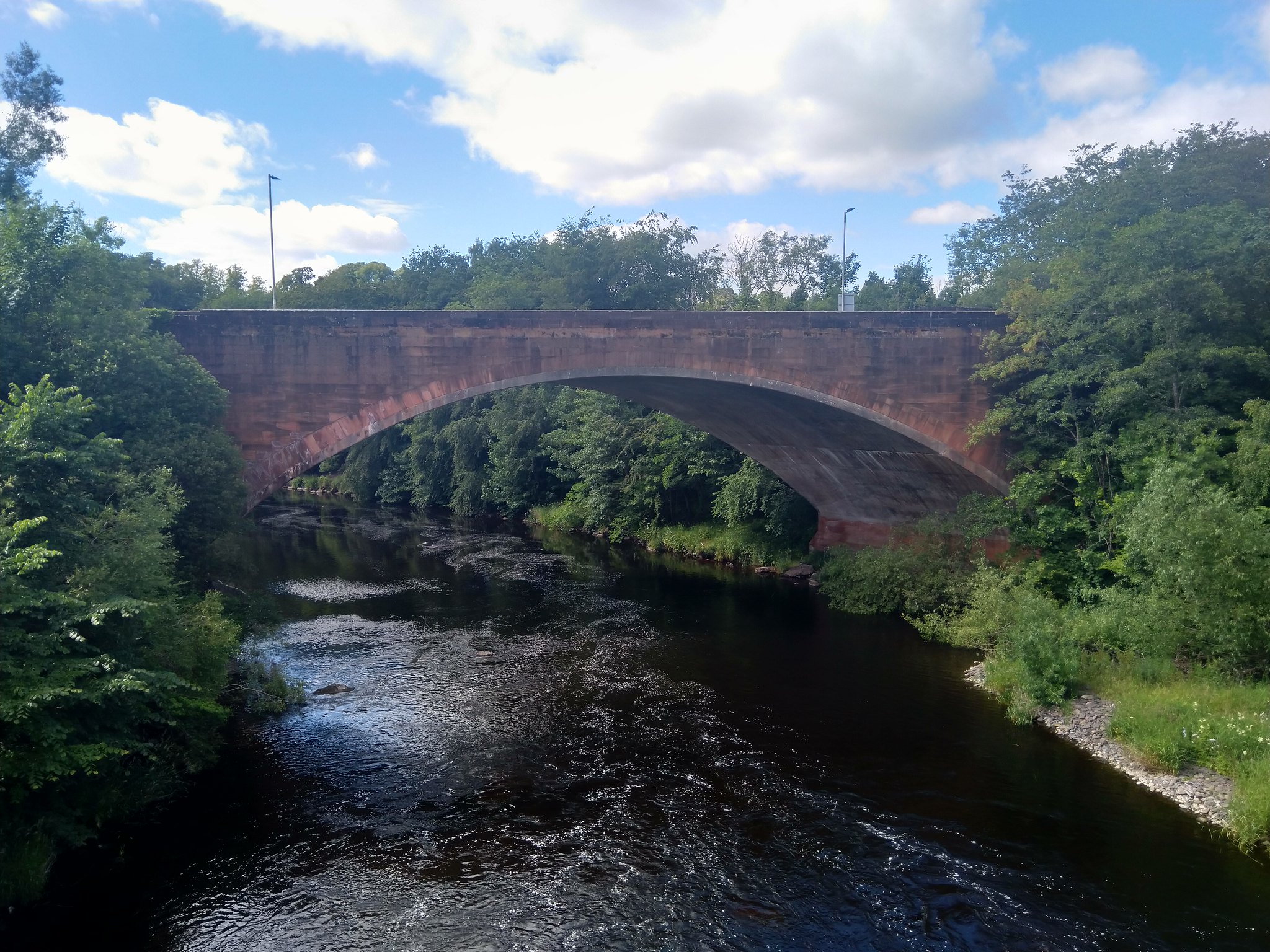 The path loops around some houses down to the river side before a steep climb and a road section up towards Castlebank Park. Almost immediately on entering the park the path heads off right and is a bit overgrown through this section before returning to pine woodlands with a climb back down to the river and then straight back up again to meet the road in to New Lanark which can be seen through the trees at various points. 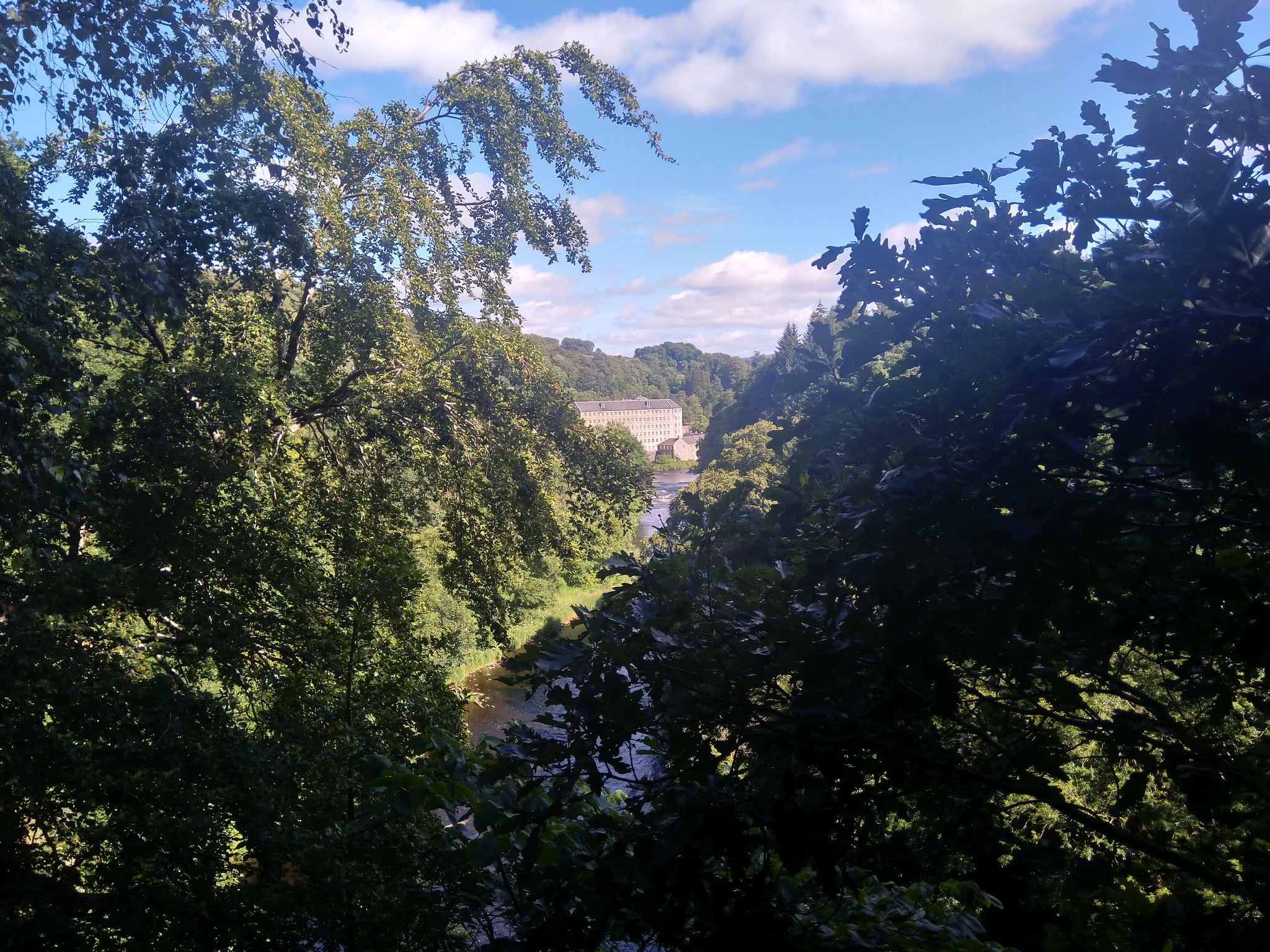 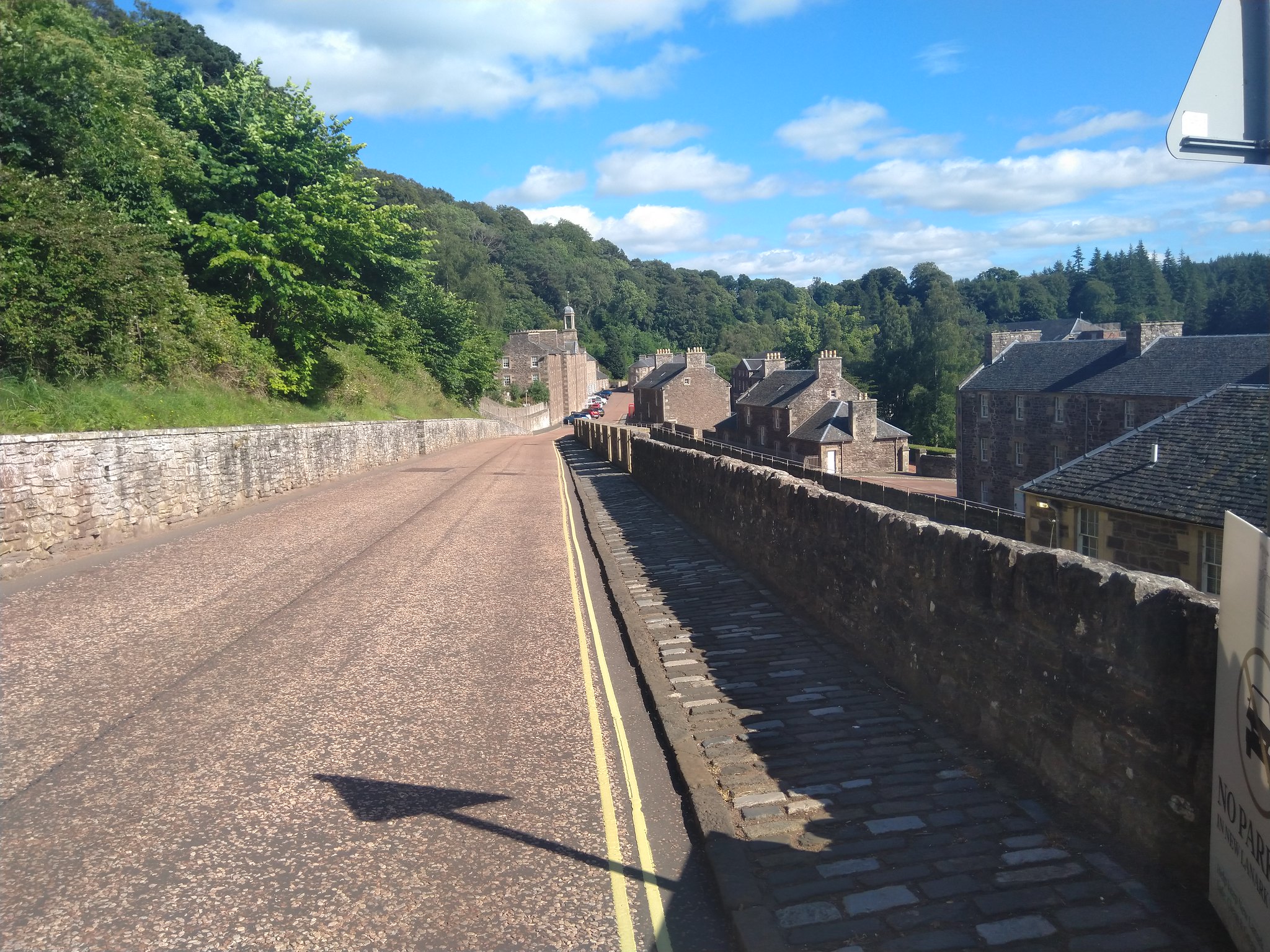 Road in to New Lanark

New Lanark was very busy with tourists, and is well worth a visit if you've never been before. There's also a hotel, cafe, play park, picnic area (where I stopped for a sandwich and cofee that I'd brought with me) and for some reason loads of dinosaur models. The kids I saw around seemed to like them anyway. 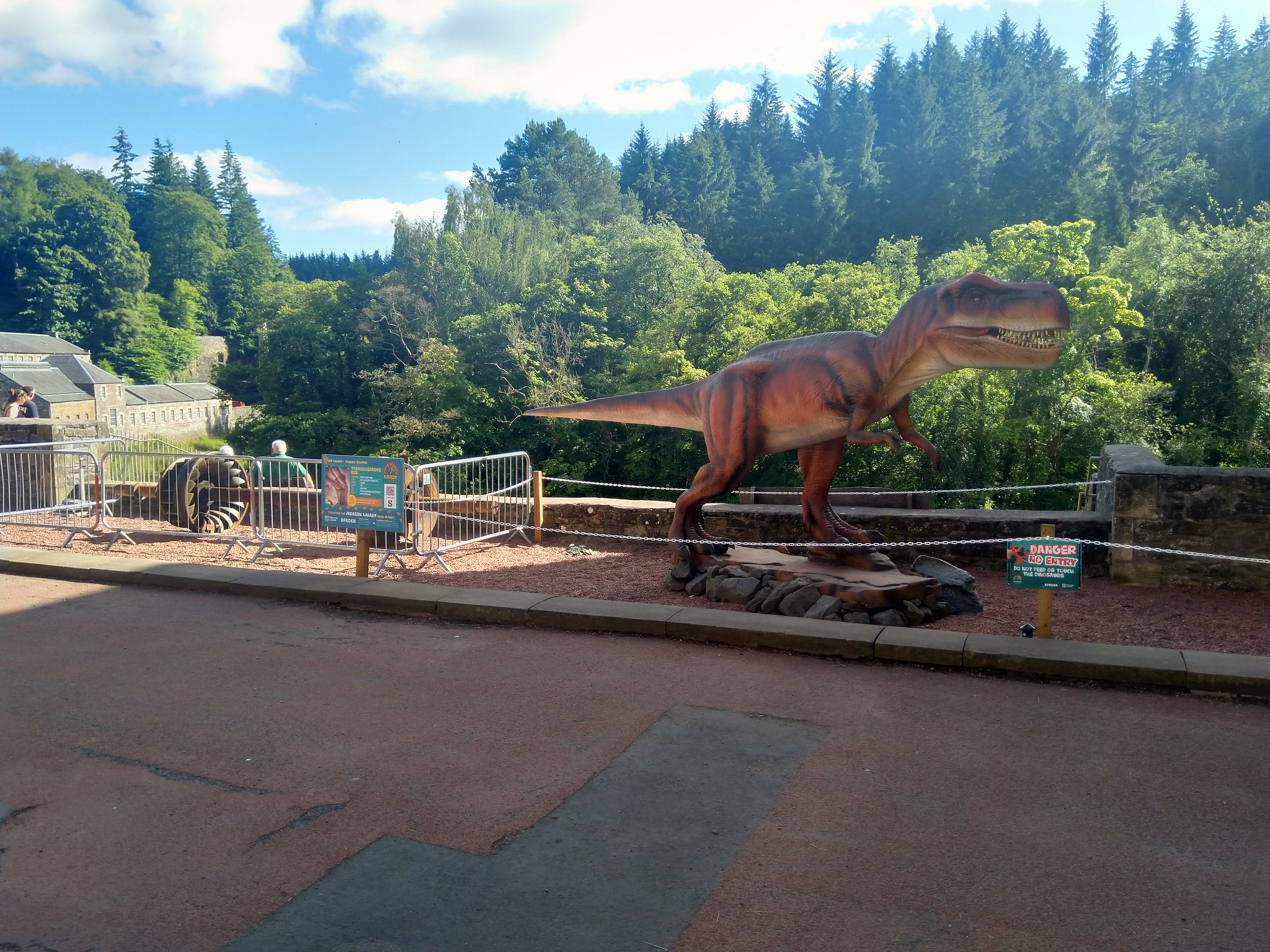 Don't think this was a native species! 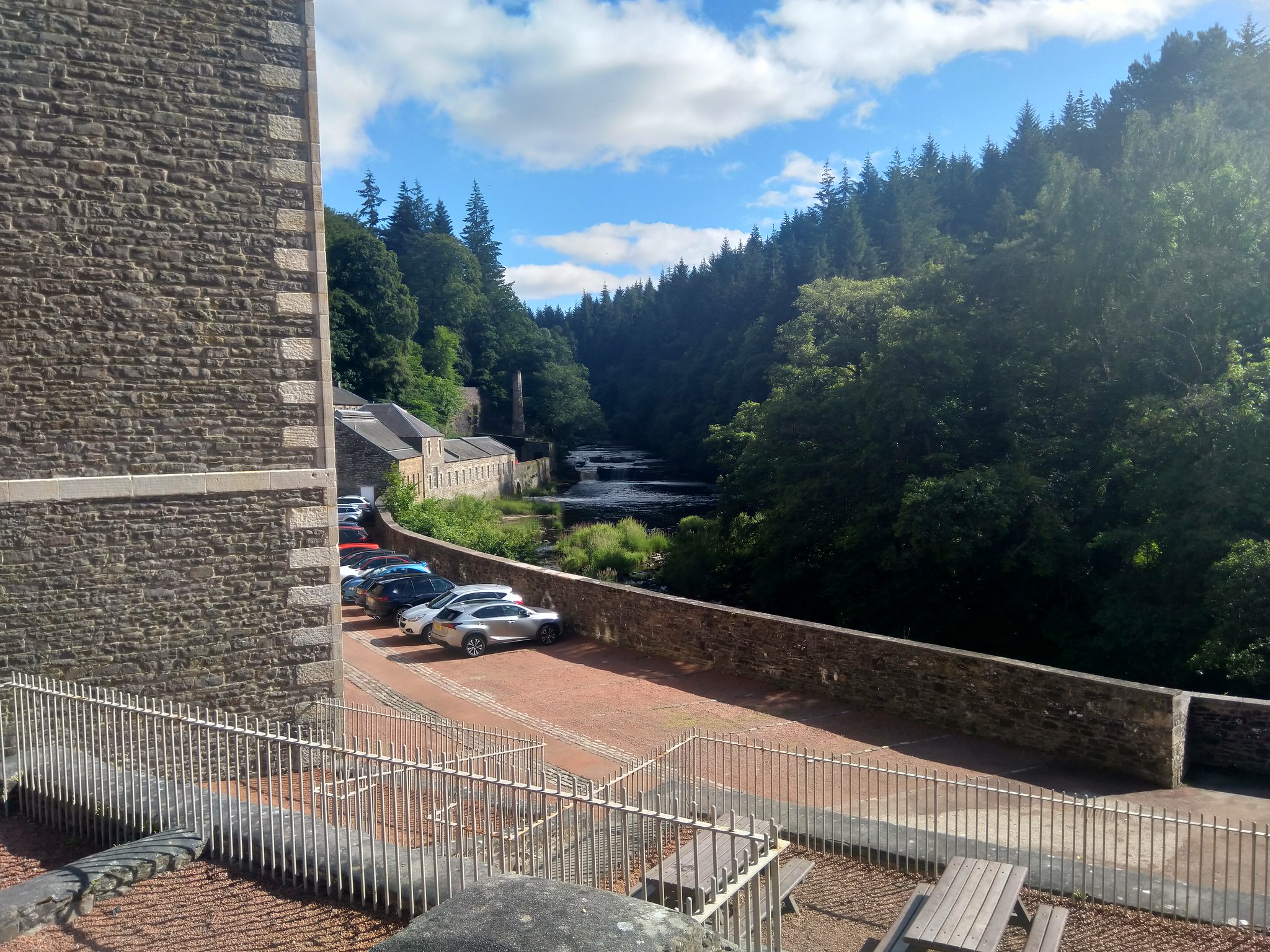 Suitably refeshed after a rest and some food, the route carries on out of New Lanark and in to the nature reserve. This is managed by the Scottish Wildlife Trust so there is lots of information about the work they do and the animals and plants that you can see through the reserve. Much of this section is on wooden boardwalks near the river until a climb at Corra Linn past Bonnington Power Station. 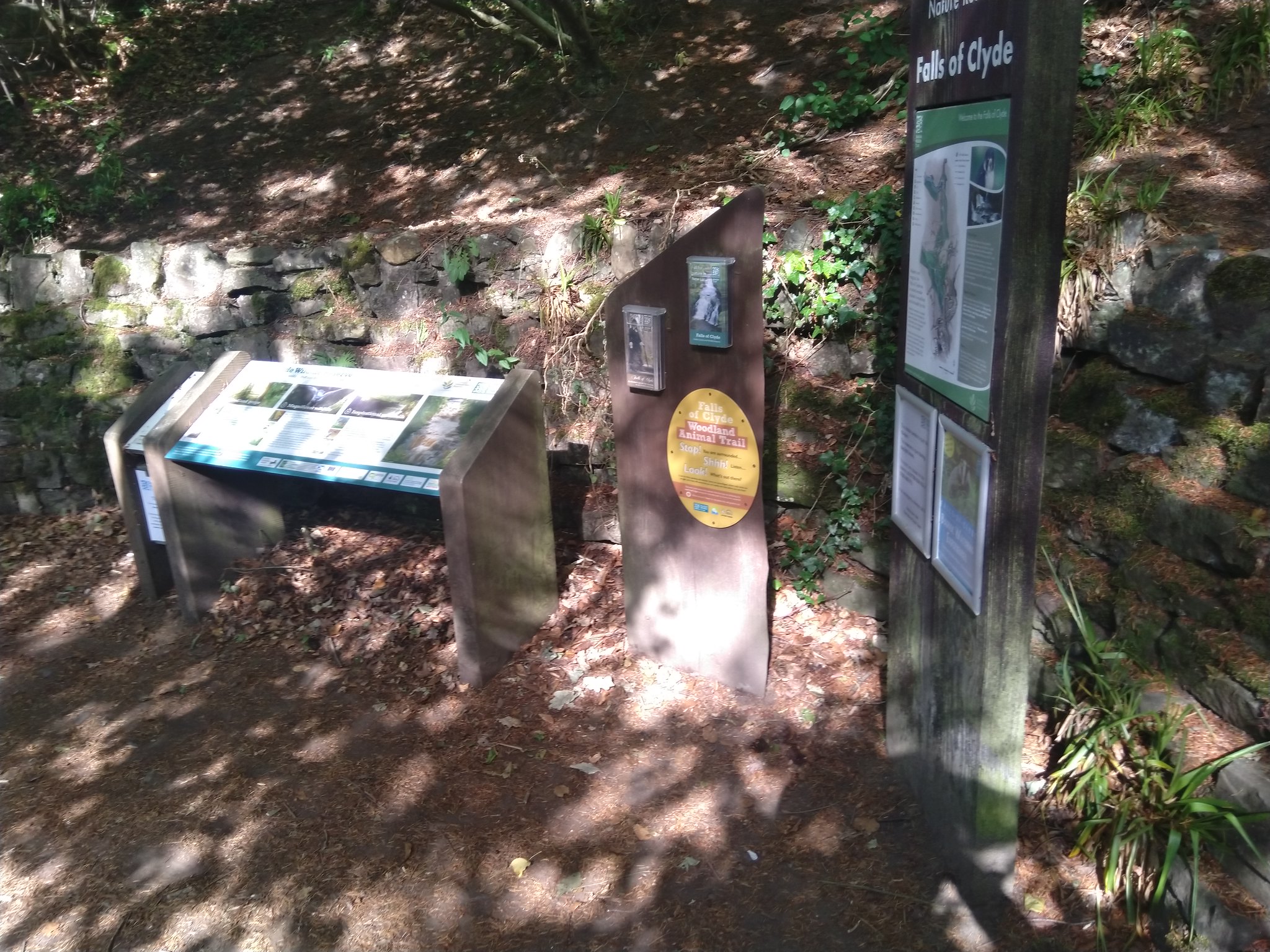 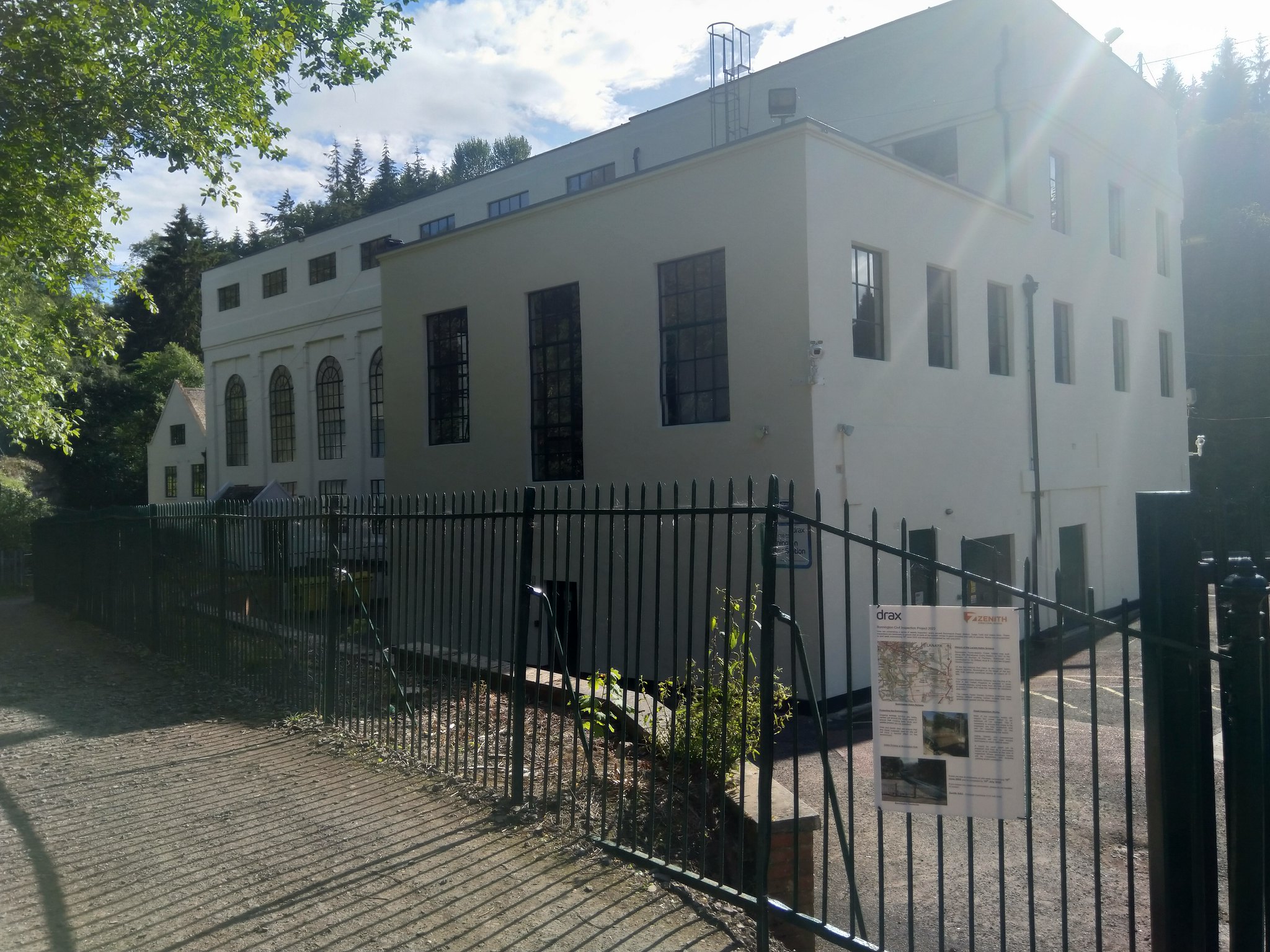 We're back in to woodland again now with viewpoints along the way. The views of Corra Linn are (IMO) better from the hidden side, about 1km further upriver we start to see and hear Bonnington Linn, the last of the Falls of Clyde. 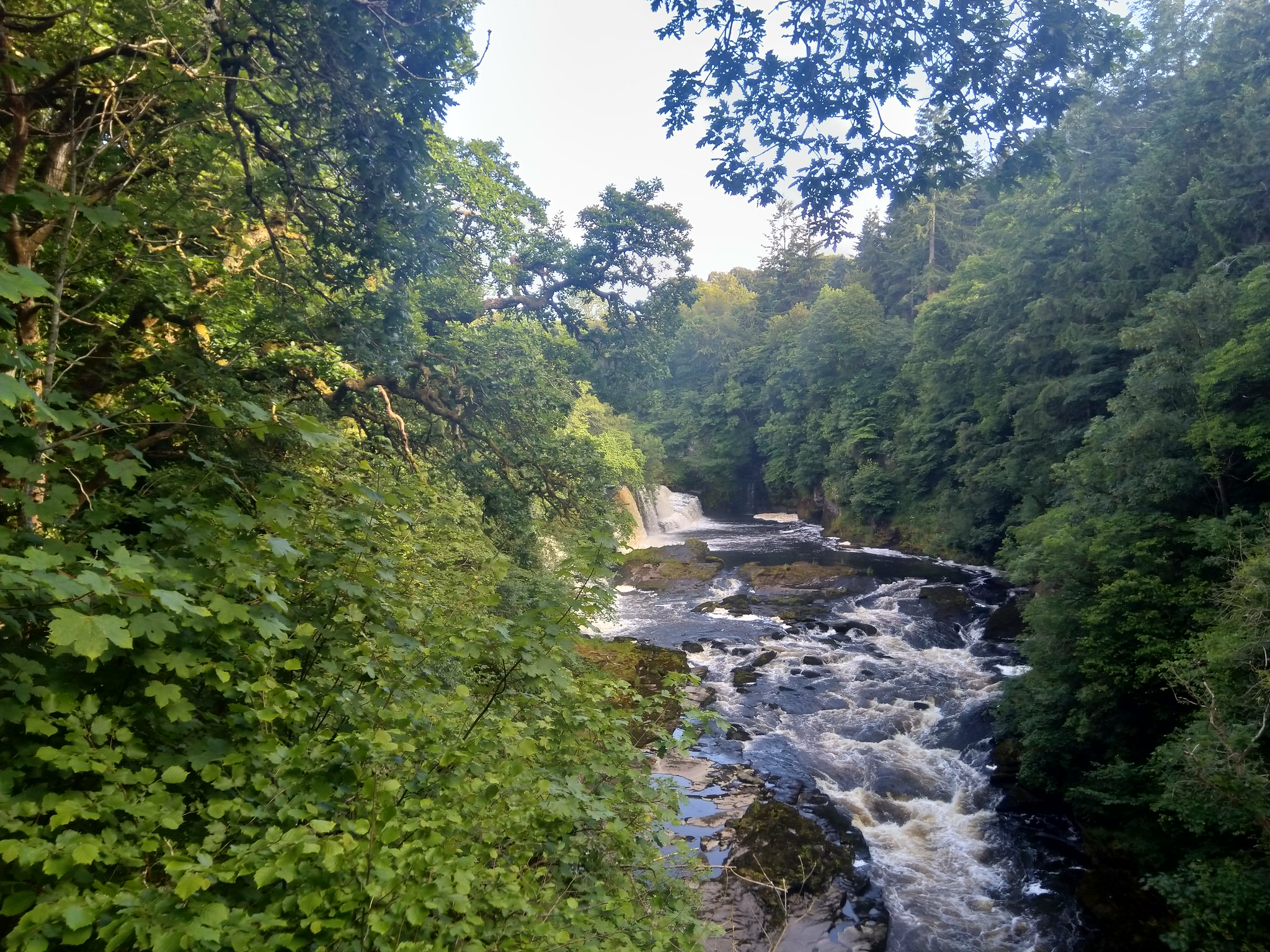 Bonnington Linn hiding around the corner 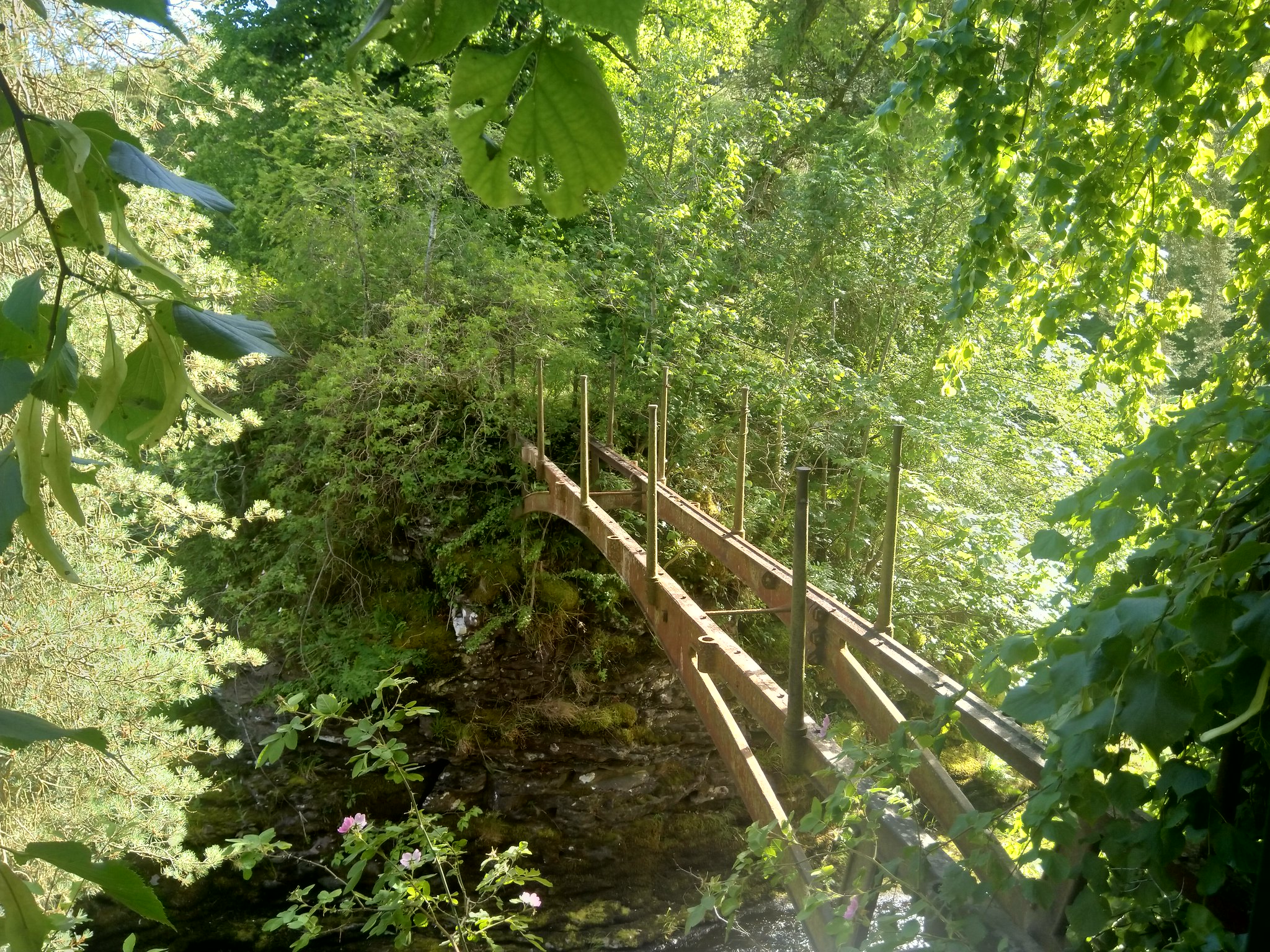 Old Iron bridge to the island at Bonnington Linn 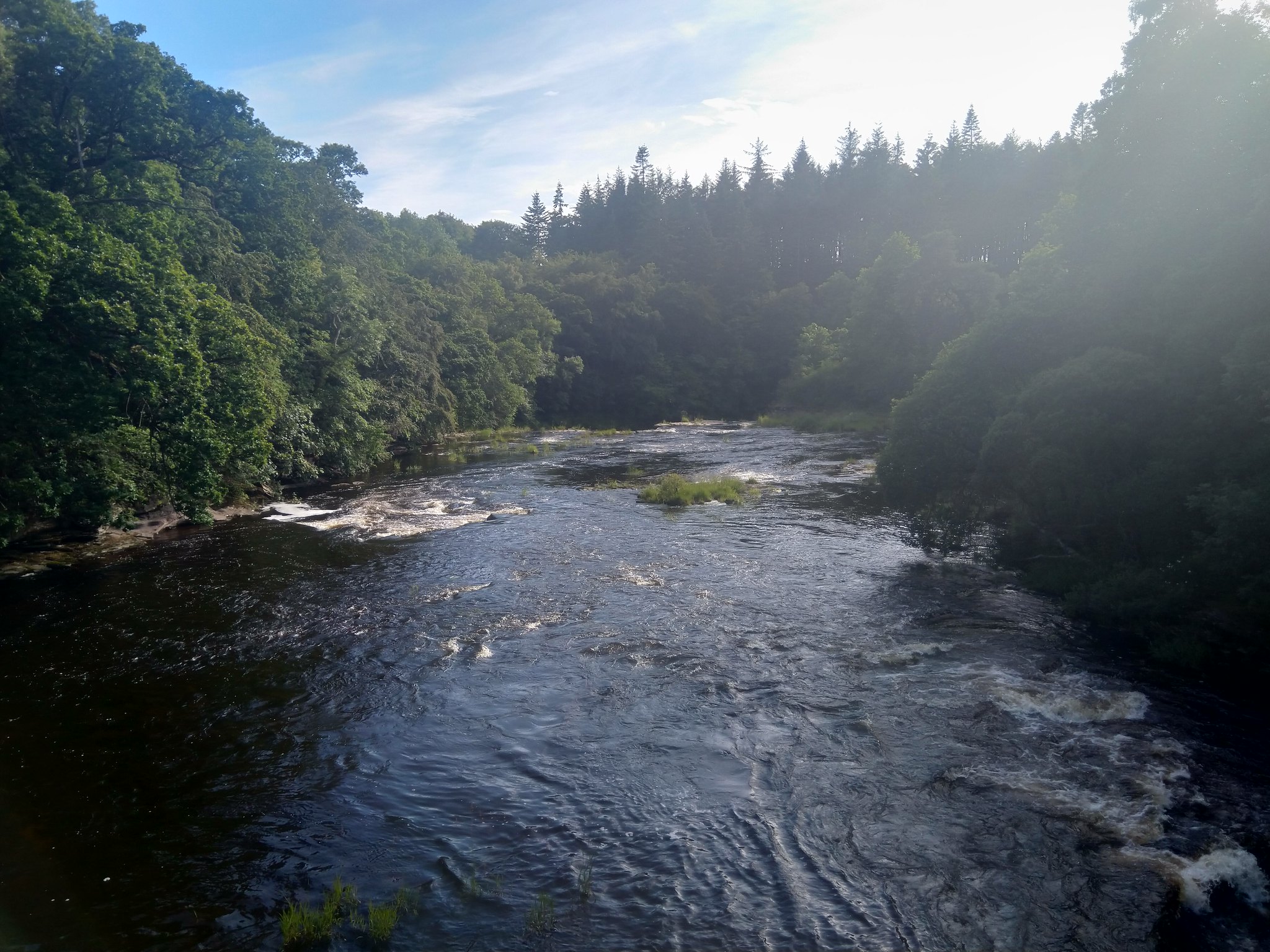 Crossing the river at Bonnington Weir is where the classic route would turn and go back to New Lanark, but the views of the Linn are better from the hidden side. 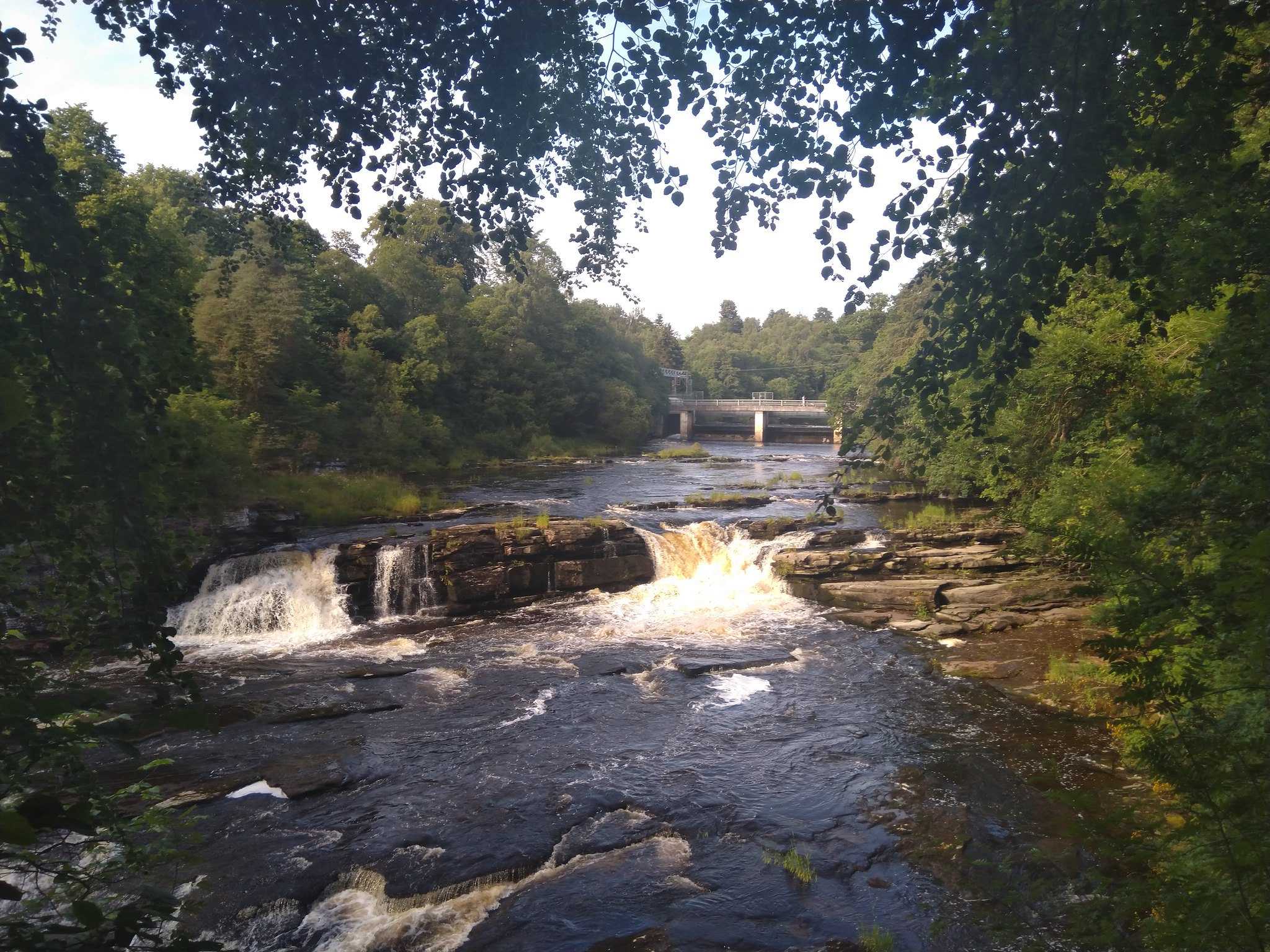 Bonnington Linn with the weir in the background 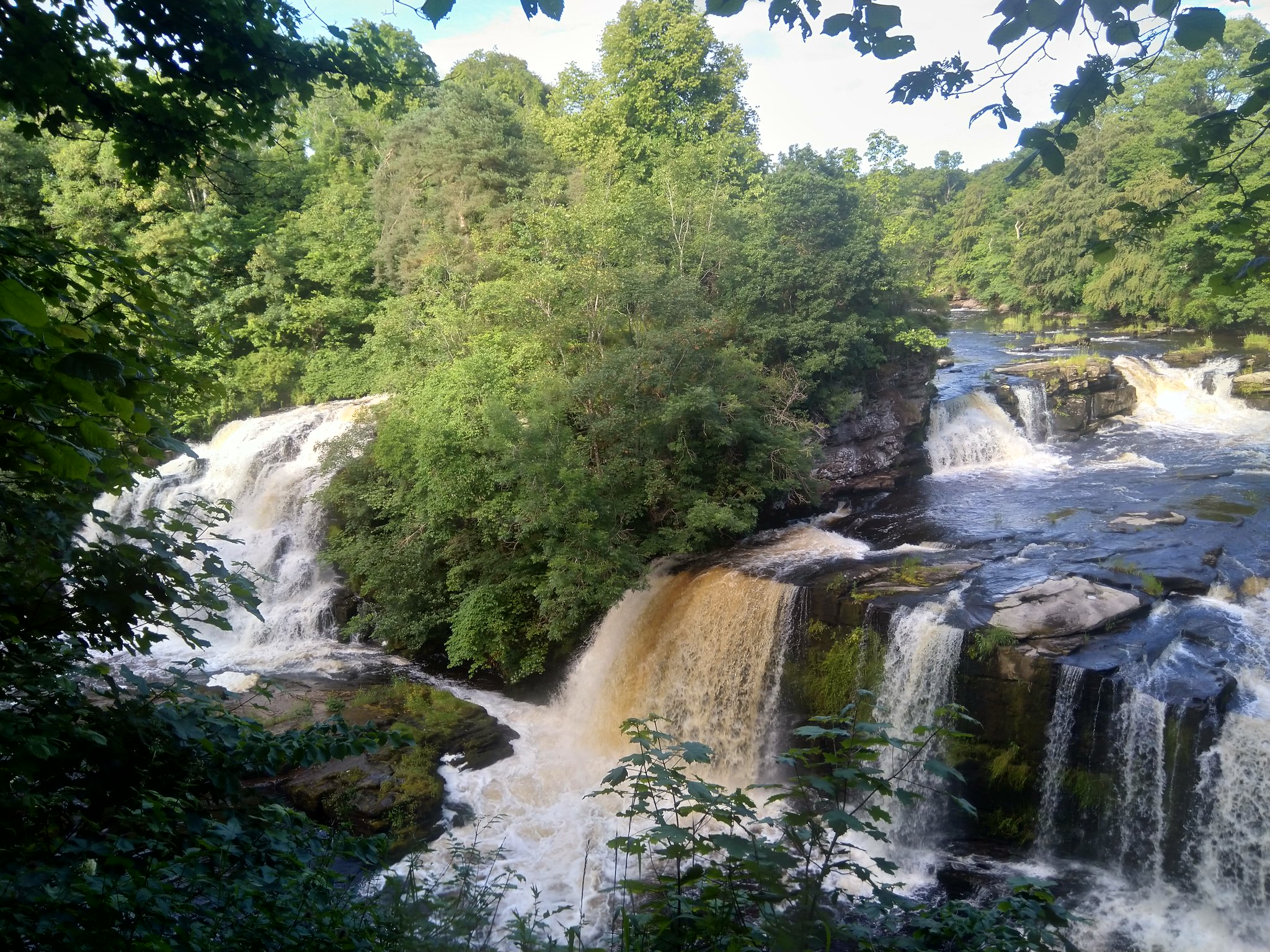 Bonnington Linn. The old iron bridge is on the far side of the island hidden by the trees

About 1km along the path the loop is complete at Corra Linn and I headed left back on to the Forestry Road to get back to my car.

Overall a great walk, it's about 12km in total and could be done as quickly or as slowly as you like. There's a lot to see with the Falls, ruins of Corra Castle, Bonnington Pavilion and New Lanark so could easily be stretched out to a day trip and there are public transport options to/from Lanark and Kirkfieldbank.
Click to mark this as a great report. Register or Login free to be able to rate and comment on reports (as well as access 1:25000 mapping).

Bagged my first hill in Scotland, Tinto from the North