It seems the Howgills are popular now!

Judging by Walkhighlands, the Howgills seems a popular spot at the moment! Maybe the thought of nose to tail traffic and nightmare parking in the Lakes and Snowdonia has attracted the discerning walker to this (normally) quiet edge of Cumbria that I never knew was Cumbria

Based on reports on here, I decided to park at the Cross Keys and start by climbing alongside Cautley Spout. A route that from the valley looks vertical. And when you're on it, it's a well engineered staircase with amazing views over the falls.

Following Cautley Crags around a steady climb over subsidiary peaks, soon arrive at Calders. Here the path does a 90 degree bend on to the highway of the Dales High Way! Big wide path that a tank could take!

From here it gets a little more guesswork. I followed the path partly into Bowderdale and then picked a route up Yarlside from the opposite side of the valley. I decided on the route up from Bowderdale Head which would involve a quick there and back to the summit on linked sheep trods but it worked and soon I was on the ridge.

The descent off Yarlside was very steep but direct back to the Cross Keys footbridge. Bridge from the car park 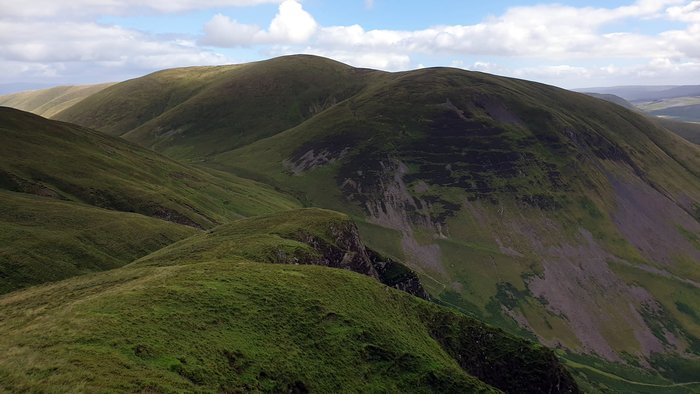 Quick look over Yarlside (final Hewitt) before heading the other way The rather prosiac Calf top on the highway A look back over Cautley Crag from the descent of Yarlside And finally of selfie of an eejut!
Click to mark this as a great report. Register or Login free to be able to rate and comment on reports (as well as access 1:25000 mapping).