Arrived in kathmandu 13 March and had a very interesting two days of exploration and waiting on my luggage to appear - lost somewhere in transit! 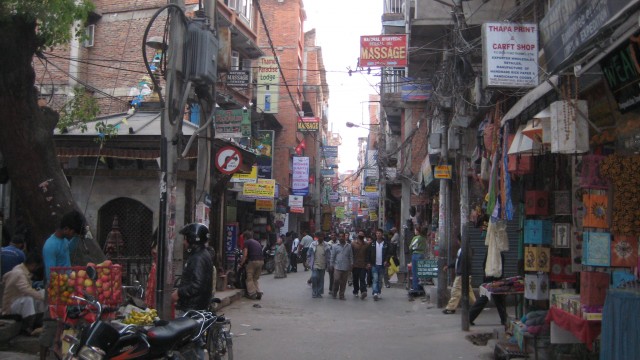 My first thoughts were not good about Kathmandu, dirty, stinks like hell, very noisy, and could not wait to get going on our trek. This opinion change on my return.
Sunday 14th March still no bag, leaving 1st flight to Lukla airport on Monday morning, therefore had to go buy the minimum amount of equipment required to do this trek. Managed to get nearly everything except underwear which was an issue in kathmandu? found some xxxL Asian designer pants - no option but to buy. We left on Monday morning with a flight to Lukla airport, very nice flight up the valley with some really good views Inside the small plane View just prior to approach into Lukla

Just landed and off on a 6 hour walk to our first lodge at Phakding, 2652M This is where the xxxxL underwear brought a smile to everyone's face, I went to change my undies on arrival so I could wash the only proper pair I had, I opened the packet and pulled them on as far as my mid thigh level, I pulled a we bit harder and those pants became an instant Tourniquet and hair removal device! Not funny but my room mate was in fits of laughter and as the walls are only thin plyboard everyone in the lodge heard what was going on

Well I had a look and sniff at the underwear i had taken off and to be honest it would do for another day or two!!

The walk in was very hard at times and with the altitude ever increasing you soon realise that your breathing does get more laboured. here is a quick photo summary of the way in. Arrived Namche and stayed at the Khumbu resort Lodge 3440M The view from the lounge and our bedroom - fantastic! As part of the Trek we were told there was going to be optional afternoon treks up to a higher altitude to allow for acclimatisation, optional they were not and we all done them, every one was hard but we were told they would stand us in good stead for the trek ahead.
One trek was to go see Mount Everest from a weeks walking away - how could you refuse, I thought this was a hard afternoon trek after walking for 6 hours in the morning just to get there, my mistake there was a lot more challenging optional walks later one!!! Walk up from Namche to see Everest

EVEREST is the mountain top just above the ridge line to the right of my head with the plume coming off it, also shown to my left is Mt Amadablam, this is a very inspiring sight - fantastic looking mountain. This little trek took us up to just below 4000M and back down to Namche at 3440M. I did manage to buy some undies which with a little modification by cutting the sides a little would allow me to change and wash - toga style. Lesson to be learned here, travel with change of clothes and vital equipment, boots medicine etc...
Onward to Tengbouche Monastery and lodge, we were allowed to sit in and experience morning prayers in the monastery and then watch the young monks play football against the porters - not a lot of skill but how they can manage to run like that at 3900M is amazing, I was out of breath just getting to the football pitch! A typical lodge room of average size, we did get smaller - yes smaller, Not a lot of room and the walls are very thin plywood = no privacy at all, toilets were just ... well you cant imagine them - trust me. You just adapt as that is life up there some good toilets and a lot of very bad ones.
Getting closer, another optional excursion this time to 4000m again and yes I am as tired as I look!. On the way up and down we passed a lot of boxes which we were told had the human remains in them! there were also a lot of prayer huts which we had to pass very quietly.
Onward to Pheriche Village, actually just a few huts and lodges. time for another optional climb, this one was nicknamed little bugger but was re-named little B@stard once I got to the top of it all 5000M, first time at this height and it was again the hardest thing I have ever done! worth it for the stunning panoramic views Cloud rolls up the valley

One step at a time is all it took but this climb did take its tool on me I never really felt I had time to recover from this and everything from now on which involved a climb became a real battle of mind over body tiredness and soreness. The valley floor down on the right hand side (blue Lodge roof) is where we came from and are returning too. It was an acclimatisation trip that was required but it was physically hard. To put this in perspective I only started going up hills in Scotland in November 2009 to get some hill fitness before the trip, so yes I was not as physically prepared as some people on the trip who were hill fit.
I will jump to the walk into Everest, left the lodge at 3am in the morning to walk the 4/5 hours into the base of Kala Patar, off into the darkness we travelled, very cold, very tired and cant wait to get there, get there we did, stopped off for breakfast of porridge and hot tee and the lodge before heading on up KP. I think it was about a Munroe in height gain but took me 4 hours to get there! One foot at a time and just had to keep going. We arrived just below the scramble up a couple of hundred meters ok rocks and sat for some drinks and snacks and had our first real long look at Mt Everest and Nuptse, The vastness of the whole area is what made me sit up and just stare, it is beyond description.. Khumbu Glacier and the way in.

And finally what you come for.... Everest is above my head and at the back with Nuptse foreground to my left.
View of me at top of Kala Patar Top of Kala Patar with Pumori in the background

Next photo, Below and to the left is Everest base camp which had just started to come together for the season And finally the way home and just to bring a smile to your face... New hat for the golf course!!!!

and the dog, scruffy, ugly, unkempt, but happy it must be all the fresh air and prayer!!! The happiest dog in the world

Arrived back in Lukla three days later and found heaven well not quite but it was an alternative Everest conquest!? Everest beer - fantastic and went down a treat

If you ever wanted to experience this trip then do it sooner rather than later, it is a life experience and one to both challenge and amaze you with its culture, people and visual extravaganza. I was not hill fit and it did become a battle of mind over body but if you have the desire then you will do it. I am 50 years old and thought I was fit for my age - not hill fit though so get the training in and you will enjoy it all the more.
I also told my wife on my return that if I ever suggested doing something like that again she was to give me a hard slap! Well I am now preparing for that slap as i now wish to do the Anapurna trail, it has got into my blood just to experience those mountains and people again, I can't wait .... so dont you dare.... do it now.

Enjoy what it gives to you.