Rather than do just the standard pair Beinn a' Chaorainn and Beinn Bhreac, why not add in Beinn Mheadhoin as well, which I'd seen from the other side of Loch Avon last week doing the Bynack More/Saddle/Cairngorm circuit. I set off from Linn of Dee just before 11am by bike, on a hot day under a cloudless sky. Definitely a shorts and T-shirt day from start to finish. The track up Glen Lui is good quality, and including the odd stop to take in the view, it took 40 minutes to get past Derry Lodge and find a place to leave the bike. Luckily there was enough of a breeze to keep the temperature tolerable even in Glen Derry, so the conditions were ideal for a walk. Even better, once in Glen Derry, the first target, Beinn Mheadhoin, can be seen not too distant ahead (the photos make it look further than it actually did on the walk). There was no problem whatsoever in crossing the sometimes treacherous Glas Allt Mor! And today there was no real point to the bridge over the Derry Burn either, after the turn-off towards Coire Etchachan. Bridge over Derry Burn, with Stob Coire Etchachan behind

The path then starts to climb up into Coire Etchachan, where the Hutchison Memorial Hut is sited. 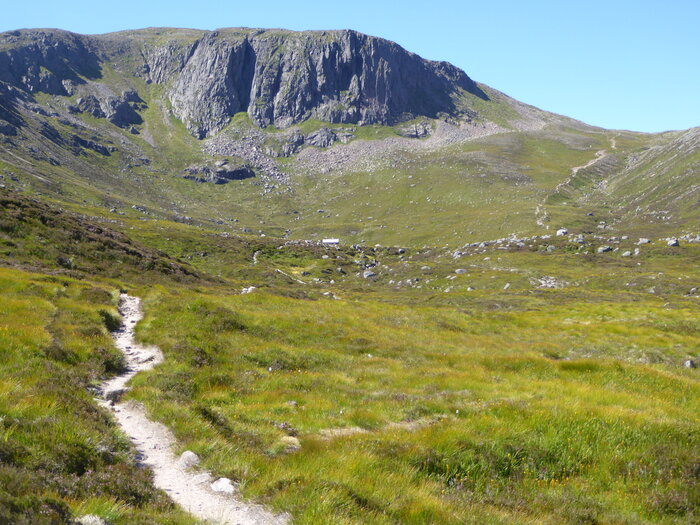 By the hut, a Czech gentleman was lounging, reading, with nearby sleeping bag airing in the breeze. He was in the highlands for a few weeks, so could afford to spend time taking advantage of the weather. It provided one of those unexpected encounters which can add to the interest and enjoyment of a walk. On from the hut, the path steepened. Coire Etchachan from near the top

Once at the top, the ground flattens beside Loch Etchachan, which was a lovely sight on a day like this. Straight on the path leads down to Loch Avon and Cairngorm beyond, but it was now time to turn right to take the path up Beinn Mheadhoin. It is fairly steep, but not difficult - much work must has been put in to create the flights of rock steps which help the climb. 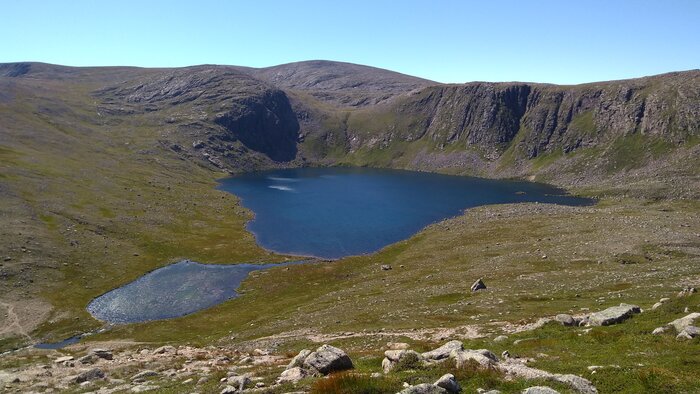 Loch Etchachan from higher up

After half an hour, I reached the South West top. Thereafter, it was an easy walk over fairly level ground to reach the summit. The Barns of Mheadhoin, including the summit, with Loch Avon below The rock forming the summit

Scrambling up the rock which forms the highest point of the mountain was mostly ok, thanks to the sticky quality of the granite. One bit is awkward, though, needing a step sideways onto the wrong foot, with not much to hold onto and depending on boots not slipping on sloping surfaces - I wouldn't like to have to do this in the wet. Like on Ben Avon, the top of the rock has interesting circular holes reminiscent of the Linn of Quoich. Hole in summit rock, with Derry Cairngorm behind

The views from the summit are impressive - the most notable mountains being Cairngorm and Bynack More to the north, Ben Macdui to the south west, Derry Cairngorm to the south, plus Beinn a' Chaorainn and Beinn a' Bhùird to the east. The next target, Beinn a' Chaorainn, seen from Beinn Mheadhoin summit, with Beinn a' Bhùird behind

The next stage of the walk was to climb Beinn a' Chaorainn. There seemed little point in going back round through Coire Etchachan - on the way up Glen Derry, I could see that the direct route down the east side of Beinn Mheadhoin, although steep, was perfectly manageable. After taking in Stob Coire Etchachan, I headed east and, heading towards the path which was visible up the side of Beinn a' Chaorainn, was soon at the bottom. There were some boggy bits to cross there, but after the recent dry conditions, nothing too much. The path up the other side was somewhat patchy - it certainly hadn't been worked on like that on Beinn Mheadhoin. Looking back to Beinn Mheadhoin (with Stob Coire Etchachan on its left), after starting to ascend Beinn a' Chaorainn

It disappeared sometimes, and once up the steepest section, it seemed to disappear completely (maybe I just lost it). It was a bit of a trek over some boulder fields to the top, but again the views were good and 6½ hours after setting off, it was good to know that it was back home from here. 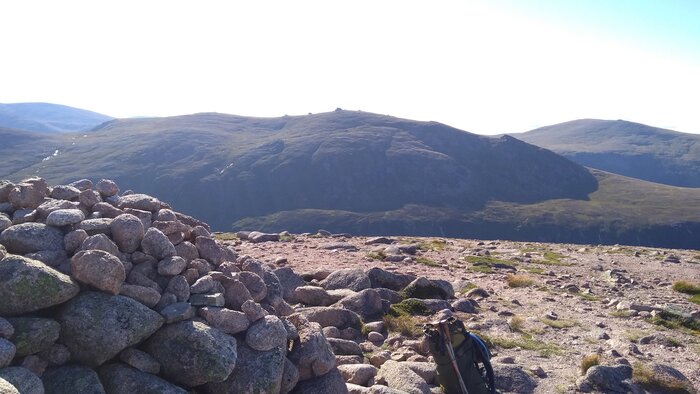 It was time to finish the sandwich which I'd started at the top of Beinn Mheadhoin. Now fortified, came the steepish descent towards the dreaded bogs of Mòine Bhealaidh, the huge flattish expanse between Beinn a' Chaorainn and Beinn Bhreac. I kept to the higher bits to try to stay dry, but due to the lack of rain in recent times, I actually encountered very few really boggy patches. I suspect that in wetter conditions it might be better to head over towards Beinn a' Chaorainn Bheag and use its ridge to keep higher over Mòine Bhealaidh, but that didn't really matter today. All the reports comment on the time it takes to cross between Beinn a' Chaorainn and Beinn Bhreac, and despite the good conditions, but perhaps because of tiredness, it did seem to take a surprisingly long time. Then, climbing Beinn Bhreac was a bit long drawn out too, again over boulder fields some of the time. I was thankful to finally reach its summit. The path down from Beinn Bhreac wasn't obvious to begin with, and was further west than I expected, and initially quite faint. But once found, it didn't disappear, and eventually it joined the path up Glen Derry which I'd walked on my way out. Soon, I reached my bike. Unfortunately, the light was fading a bit by this time, and although I hadn't encountered any up to then, as soon as I stopped, I was enveloped by swarms of midges which settled on me in large numbers. A quick application of Smidge helped a bit, but couldn't really hold the creatures at bay. Needless to say, my changeover between boots and cycling shoes, and retrieving my bike, was very much quicker than it had been in the morning. Cycling down the track in the dusk, I kept colliding with invisible clouds of midges which often got in my eyes. There would definitely be no stopping until I reached the car, where I quickly bundled my bike into the boot and shut myself inside. Safe now from the marauders, all that was left after a satisfying day was to reach the Coop in Braemar for some food before it shut.
Click to mark this as a great report. Register or Login free to be able to rate and comment on reports (as well as access 1:25000 mapping).