Charged up rams and loved up deer on Little Wyvis

It was Easter Saturday and my new Asian friend Amy's first introduction to the Scottish hills. We had considered a simple up and down of Cairngorm but the forecast strongly suggested there would be no views and it was a better outlook further north. So we agreed on Little Wyvis which perfectly fitted our remit of an easy half day climb with decent views, using the current WH route. When I first did it with Moira we followed the original WH route which included a pathless ascent from the Ben Wyvis path and perhaps on reflection not the best idea for first hill after ankle surgery.

The starting point was the same car park off the A835 that Pete and I used last July for the Silverbridge river walk. 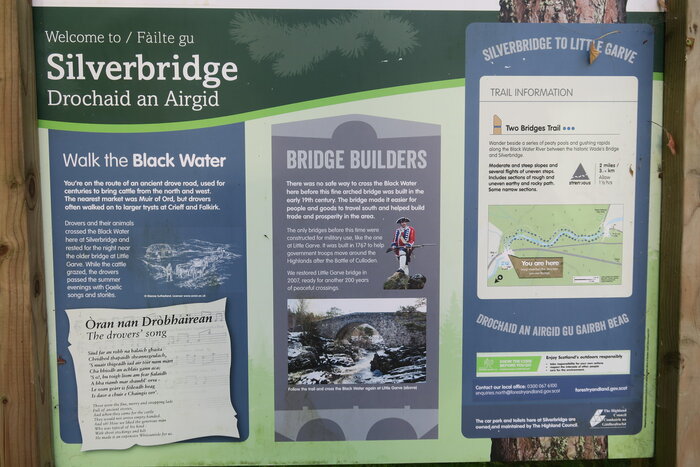 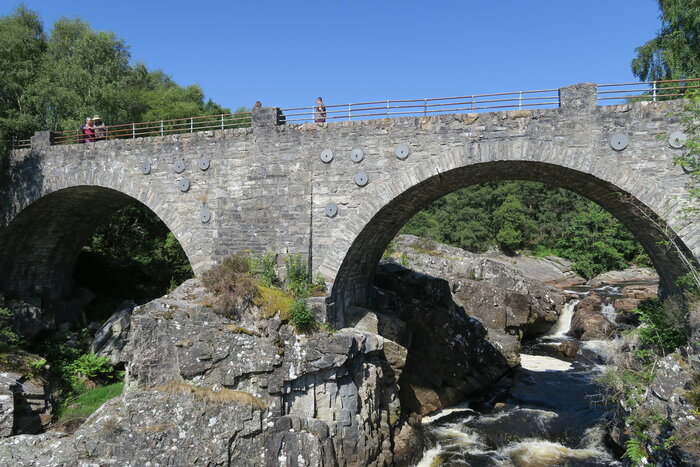 My car load arrived at 10.50 but there was a message from one of the other groups to say there was a hold up and we should head off without them. I replied that we'd wait. Starting late morning in some places risks parking difficulties, but here there wasn't a problem thanks to an overflow car park. By 11.20 everyone had arrived and we crossed the old stone bridge where I got the group to stand for a photo. 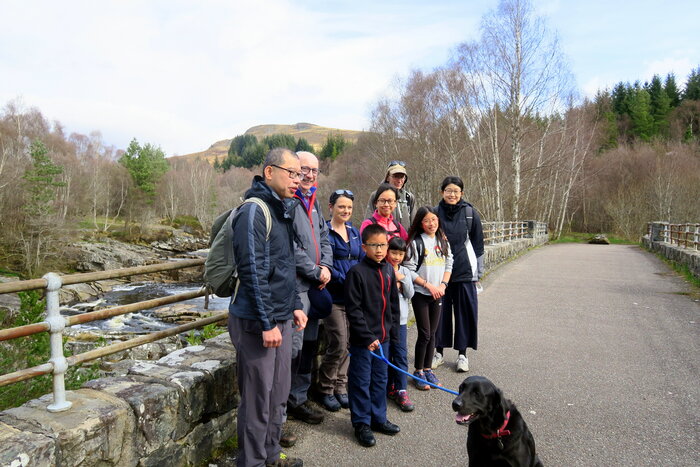 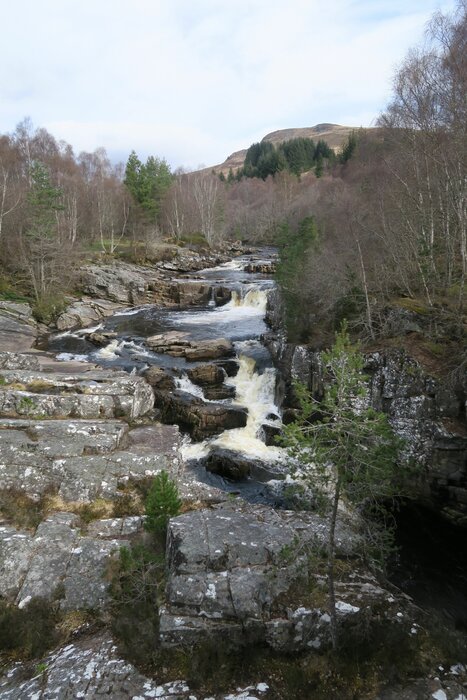 We crossed the main road carefully as traffic speeds through here on its way to Ullapool and took the track opposite signed for Silverbridge Lodge. We turned left at the junction, skirted round some industrial stuff and went through our first gate. That was us into sheep territory so the dog stayed on her lead. Bonny black faced sheep with lambs, good sized lambs for hill sheep in April. 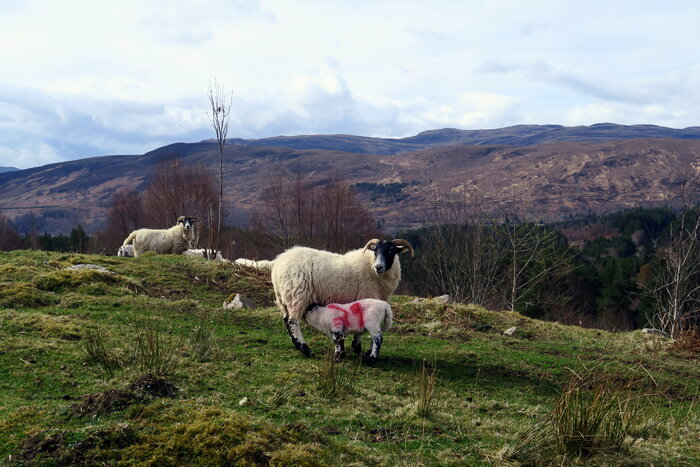 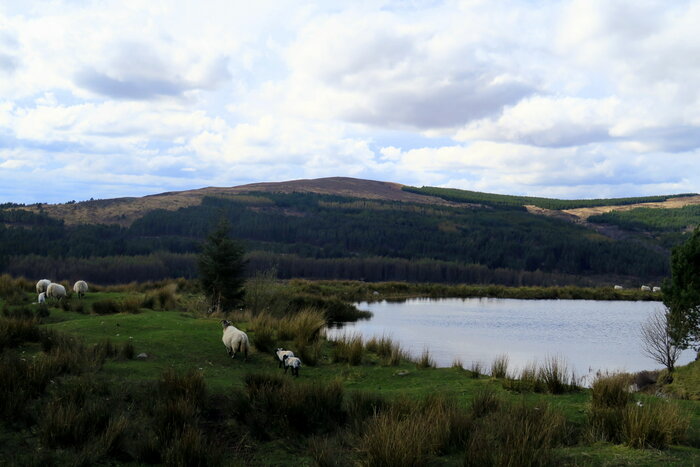 The only one of us who'd previously been up Little Wyvis by this route was Ian. It was memorable to him mainly for a slightly alarming interaction with two rams when (for some reason known only to them) they set about ramming him and he had to use his poles to fend them off. I'd never come across rams behaving like that, wondered briefly about the safety of the children and concluded there were enough of us in the group to stave off any testosterone fuelled behaviour, should it arise. What I didn't expect was what happened next.

What has joined the group in front? 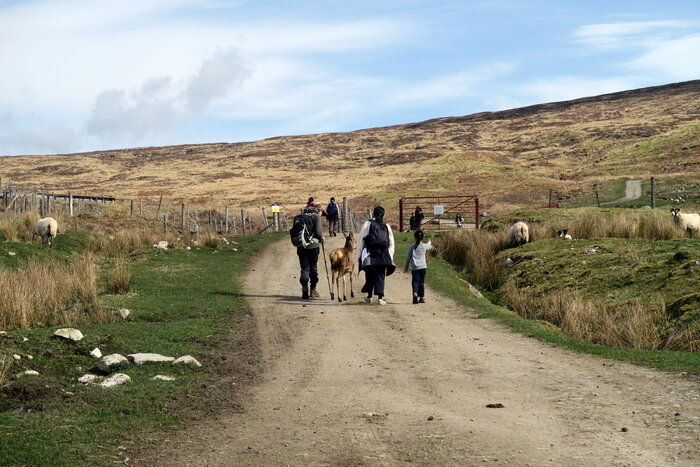 A young red deer hind suddenly appeared on the track and fell in with the group just ahead of me - and again it was Ian who was the focus of attention. He did nothing to encourage this but she walked close behind with her nose almost touching his back.

Taken a shine to our Ian 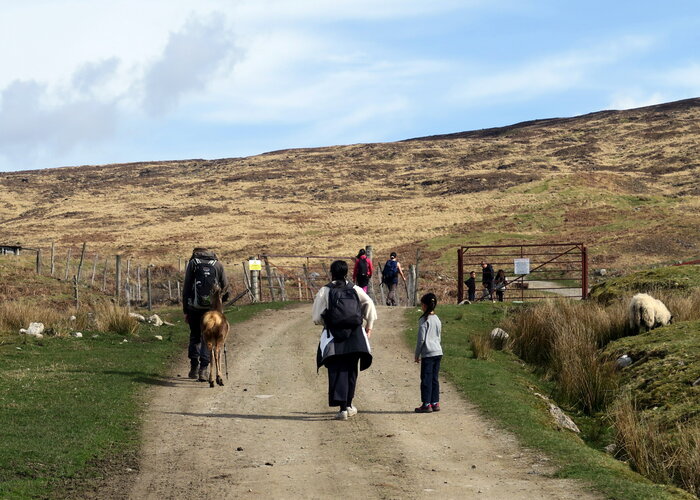 I'm not sure how long this endearing situation might have continued if we hadn't come to a gate, which we went through carefully, making sure she didn't get through with us. She then stood forlornly watching as Ian walked away. So James went back to take her photo as a compensation for her disappointment. 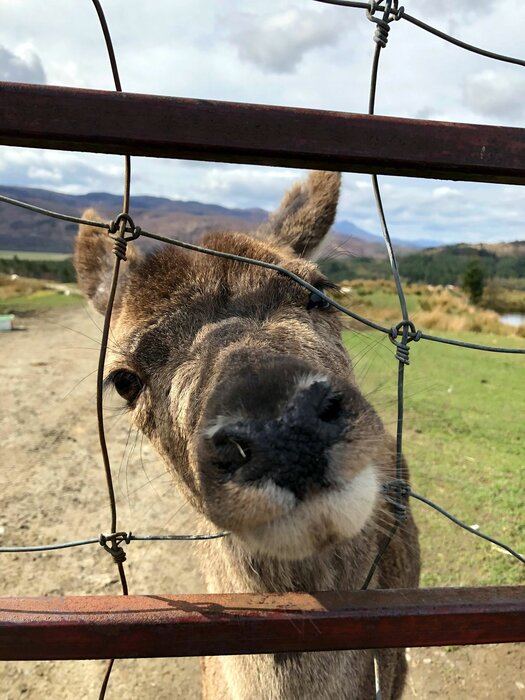 The track continued to zig zag uphill following the course of the burn before swinging away from it in the direction of Beinn a' Ghuilbein and another gate. Once through it we came to a fork in the track where we took the left option which led onto the open hill with An Cabar looking impressive on our left.

Cattle but no rams 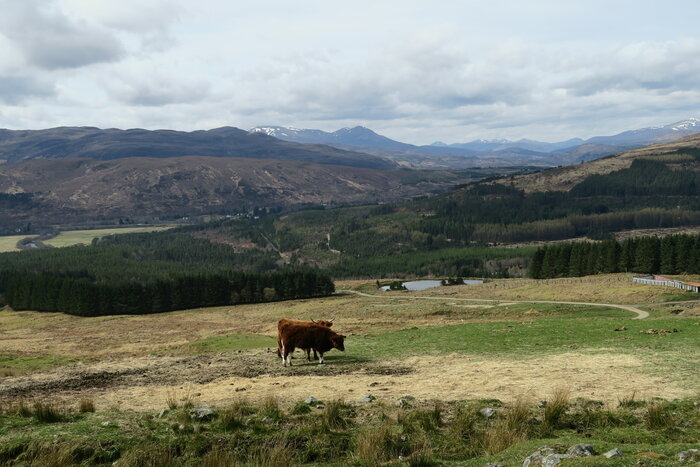 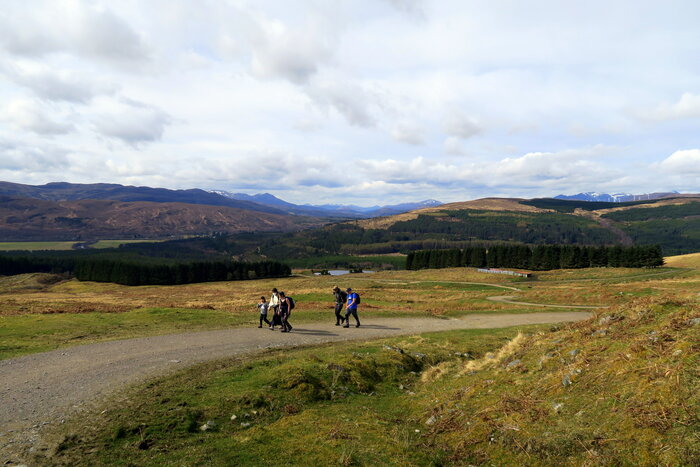 The track surface was rougher as we climbed and wet in places but nothing that waterproof trainers wouldn't cope with. Amy's shoes were lighter than ideal but she managed to negotiate the slippy bits and where the track fizzled out shortly before the summit, the last part was over grass, moss and stones and not a problem. Ian and I stood at the top, naming the hills we could see, of which there are quite a lot on a clear day from Little Wyvis. This seems to be a ritual hill people have to go through, while normal people get straight down to the business of lunch. This turned out to include an unexpected treat. Before leaving home that morning Mei had made what looked like Forfar Bridies (or Cornish Pasties if you're from the south) - filled with tasty potato curry, wrapped in crumbly light pastry and still warm from the oven. I know everything tastes better in the open air but they were delicious!

And so back to those views for anyone who would listen. I think Amy was duly chuffed to have conquered her first Scottish hill and the experience can't have put her off as a few days later she went out and bought footwear more suitable for hill terrain. We spent a good half hour at the top before heading back down the way we came. The kids had been first to the top and went at even greater speed on their way down. It had turned out to be a beautiful afternoon. When we reached the gate where we'd left Ian's cervine admirer we noticed the farmer working around the sheds there. And closely following him in the same way she'd attached herself to Ian was the deer hind. Ian and he were of similar height and build so that explained it. Her instant attraction to Ian was down to mistaken identity and presumably the farmer had been in the habit of feeding her. 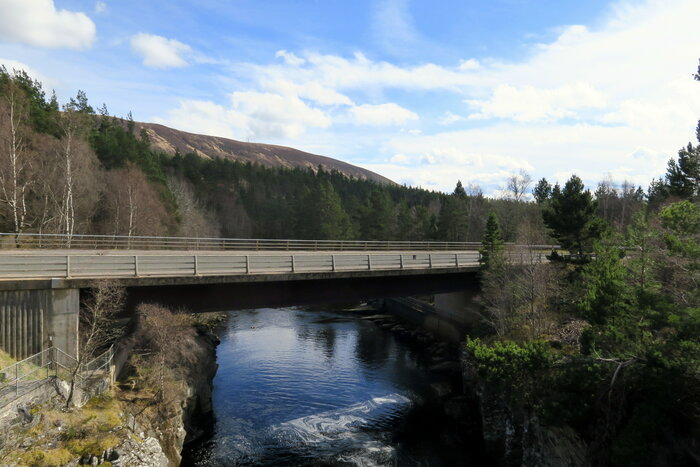 Falls of Black Water sparkling in the sunshine 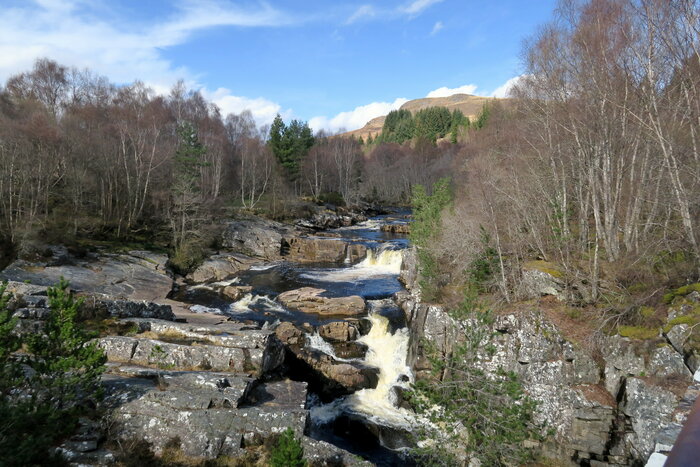 If you don't mind walking almost all the way by land rover track it makes it a very easy and straightforward Corbett, a less challenging route than the one Moira and I took in 2012.
Click to mark this as a great report. Register or Login free to be able to rate and comment on reports (as well as access 1:25000 mapping).


A brilliant encounter on a hill straight from the door

Knowing when to turn back and wait for a better day

Intoxicated with views and did a daft thing

Shenanigans in the Queen's back yard