Well it has been a while since posting anything or doing any walking so this was a real and refreshing change!! Sadly work has kept me away from the hills and the Willywalker and I had originally planned to head up to the lakes on this weekend but couldn't really stretch the time off. So instead I went across to what turned turned out to be a very sunny Wales and WW planned this trip as "somewhere a bit different and away from Pen y Fan"!!

We were also joined by another friend of our's Martin who was having his first wander in the hills for some time and so we headed off looking forward to getting out somewhere a bit different!!

You start this walk just north of Ystradfellte and we managed to squeeze in between 2 Army landies and the whole walk was pretty much spread out before us! The Three Amigo's! (or Muppets perhaps?)

It's a steady climb as you head up the fairly obvious path towards Fan Nedd and once you get there you realise the cairn that you can see isn't really the summit but simply a marker one the way to the summit. Martin at the Cairn

As WW was a bit out of shape we waited there a short while admiring the view across towards Pen-y-Fan and the surrounding countryside. Is that WW or Ivor the Engine?

A stunning day with superb visibility all around! 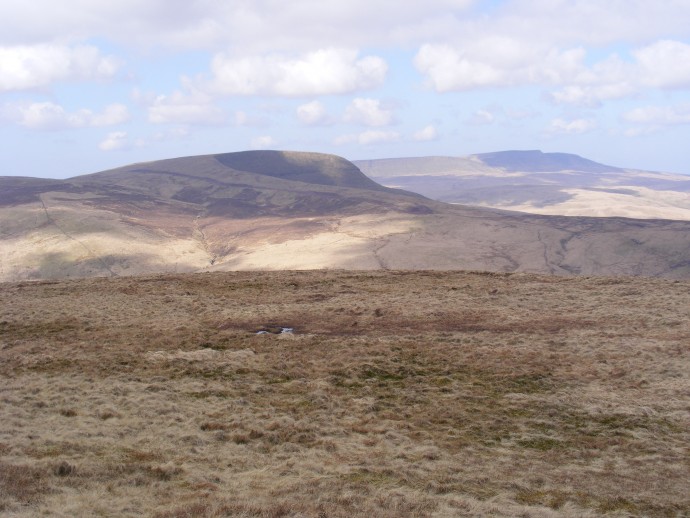 From Fan Nedd you head down the other side into the valley and towards an obvious track running along the bottom of the valley. Following this you then simply look for a spot to veer off and head up the side of the escaprment toward the summit of Fan Gyhirych (Don't ask me to pronounce this - I was with 2 welshmen and neither one of them could agree on the correct pronounciation!). Once on the summit we had the well earned break for butties, coffee, choccy and anything else we could lay our hands on! 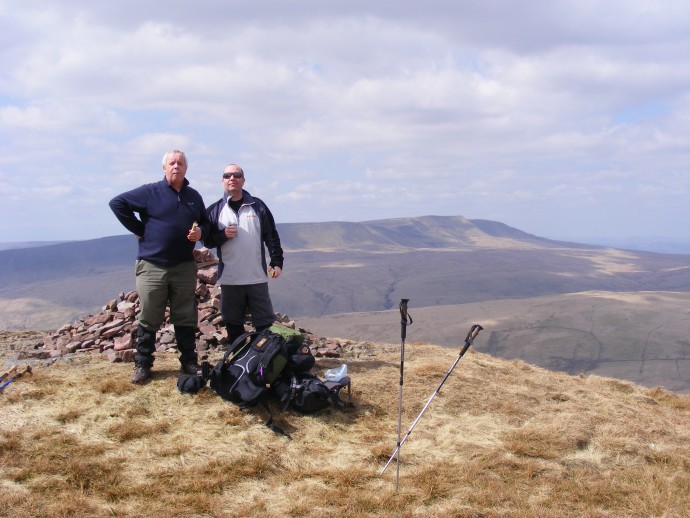 Chris and Martin on the Cairn near the summit - feeding their faces!

It was then simply a question of about turn - well nearly - we followed the edge of the escarpment along and back the way we came. We decided on a slight detour on the way back. Rather than go back over Fan Nedd we followed the wall around the face of the escarpment and back to the car.....and a stop off at the New Inn in Ystradfellte for a well earned cold one!! (I can strongly recommend the welsh cider!)

All in all a superb walk and frankly a lot more enjoyable then the usual Beacons wander with the crowds around Pen Y Fan!!
Click to mark this as a great report. Register or Login free to be able to rate and comment on reports (as well as access 1:25000 mapping).