Wanderings up and around Saddle Hill and Beinn Bhuidhe Mhor

Had a few days working in Kingussie, so was keen to get a bit of exercise when I finished on Monday morning, before heading back up the road to Inverness. It had been bitterly cold most of the time, way below freezing, and the snow levels any further east in the Cairngorms and along the A9 were pretty daunting (beautiful to look at though!), but Monday appeared and it was relatively balmy, above freezing anyway. Having had to travel around the area a bit over the preceding few days, I'd seen that the hills around Kingussie, Newtonmore and Laggan weren't anywhere near as deep in snow, so after breakfast drove the couple of miles to Newtonmore, parked in the village and headed up Old Glen Road and along the single track road to Glen Banchor.

our_route.gpx Open full screen  NB: Walkhighlands is not responsible for the accuracy of gpx files in users posts
I'd been considering doing the graham Creag Liath as I didn't do it when I was here for the 3 Monadhliath munros also done from the Glen Banchor parking area ... but the clouds were quite low and I was wanting to enjoy the walk rather than stumble around in clag. That's when I decided just to park in Newtonmore itself to get a bit more distance for the walk, and do a smaller hill instead - Creag an Loin being the one I settled on. Not a classification of hill I tick off (apparently it's a Dodd, Highland Five and Tump), but one that looked like an easy, straightforward hill walk with no avalanche risk and practically no chance of getting lost. 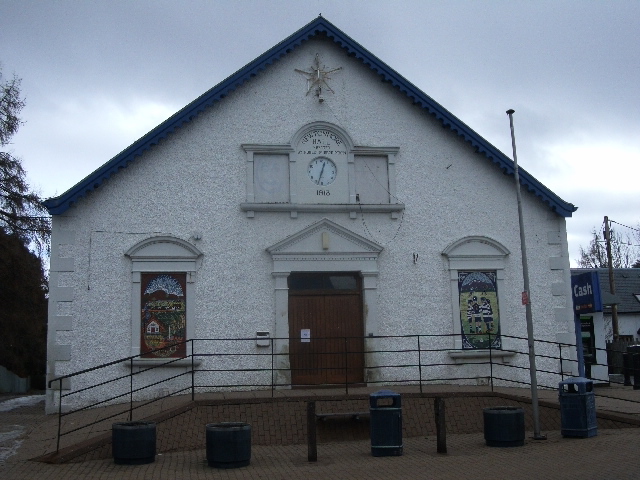 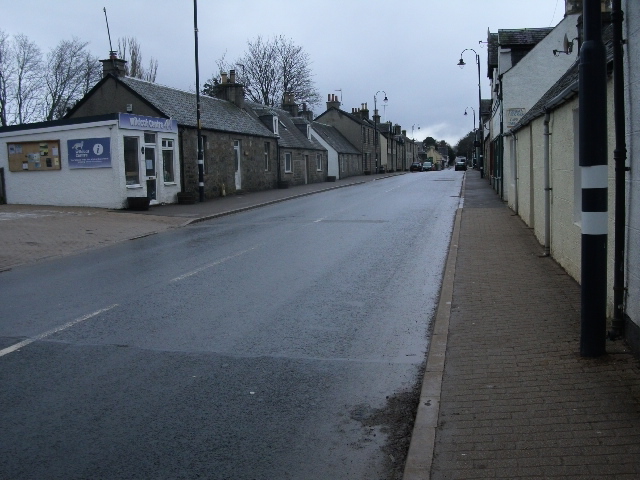 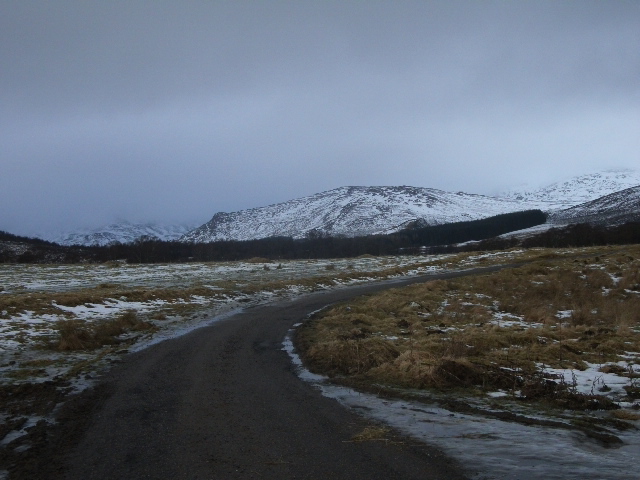 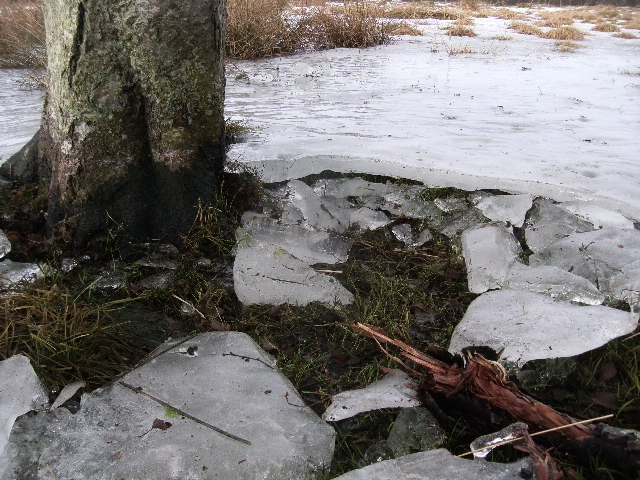 Not much snow down at this level here, but plenty thick ice with the -18C temps of recent days 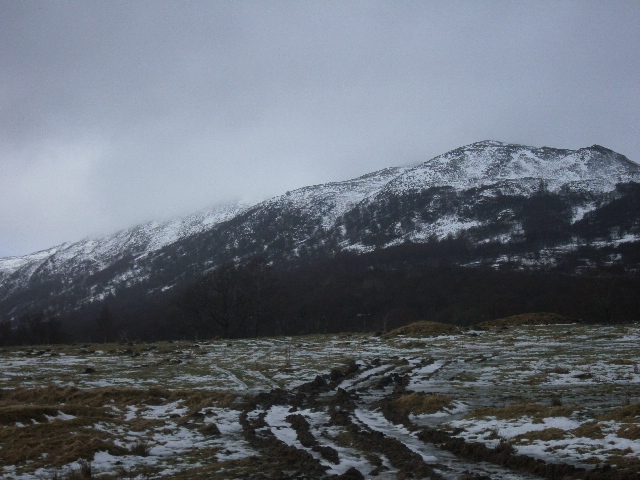 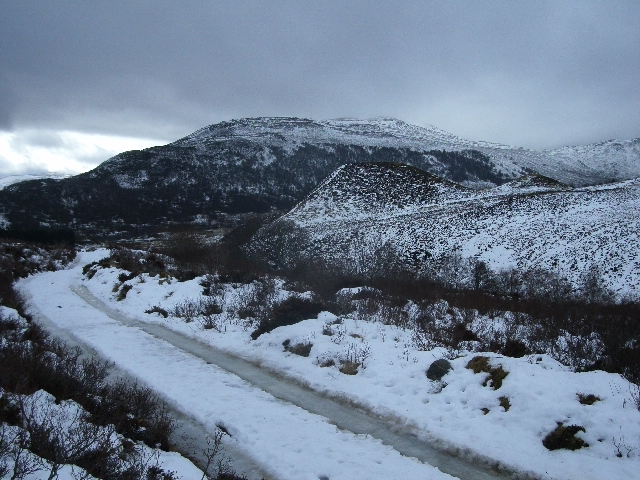 The track heading north on the east side of the Allt a Chaorainn, looking at Creag na h-Iolare on the other side of the burn

The single track road along to the parking area had nice views to Creag Dubh (another graham) and was clear of ice so an easy stroll. On getting to the parking area, I headed up the track to the right, a bit icy in parts, but easy to walk on the snow in the middle of the track or off to the sides. I had no idea if there was a path anywhere up to the summit, but I just left the track to strike up the slope at some random point and ended up coming out on top almost exactly at the summit cairn. Despite the proximity to the Monadhliath munros, views of them were pretty poor because of the cloud, but it was a good viewpoint otherwise. 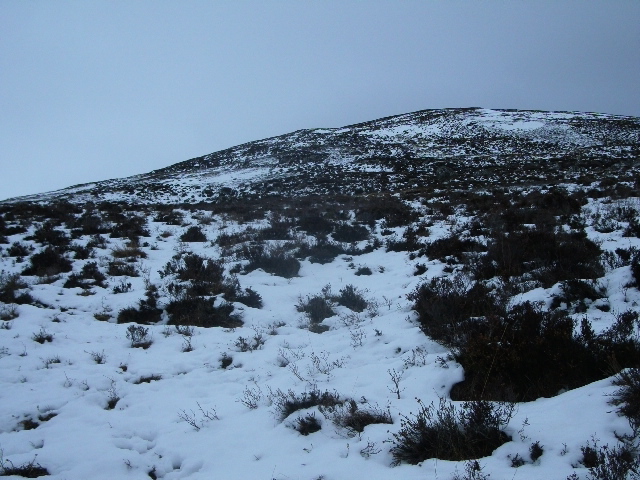 Left the track to head directly up Creag an Loin here 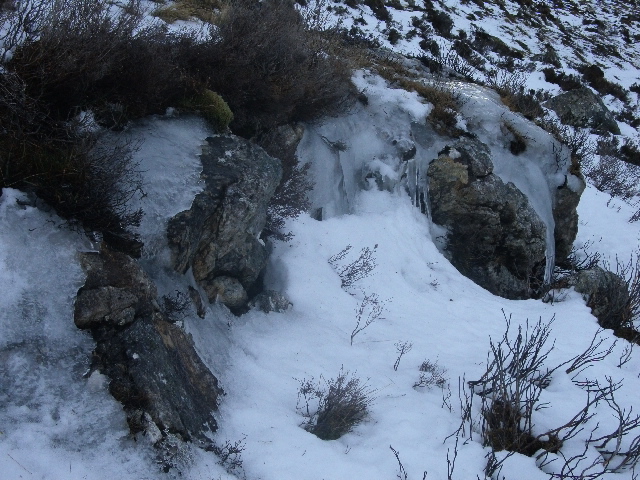 Felt quite warm compared to the previous few days, but the scenery still said winter 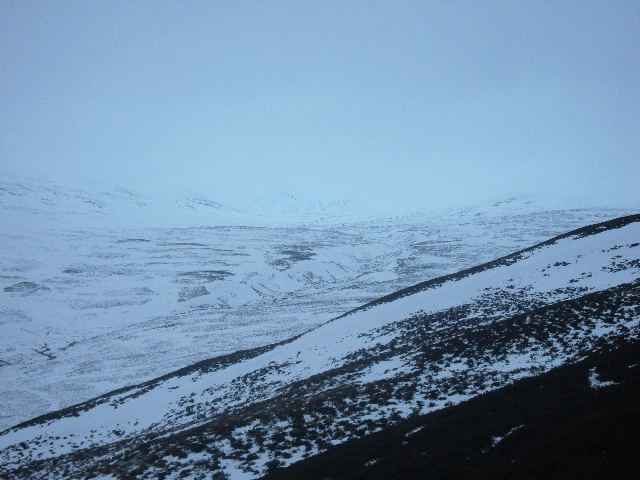 Couldn't actually see the tops of the Monadhliath munros today 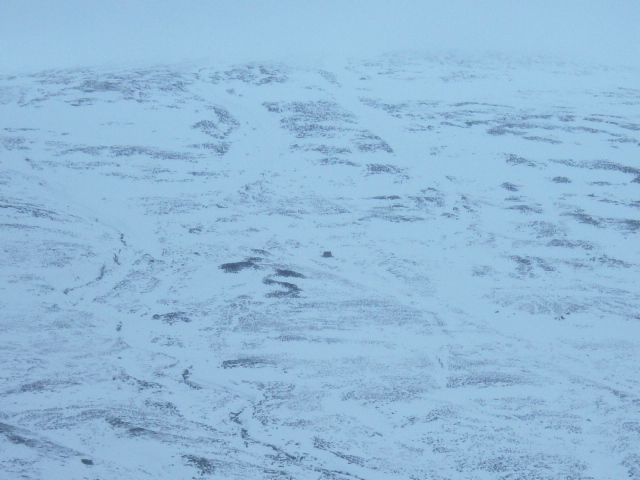 ..did manage to spot the wee bothy on the descent route from A' Chailleach though

There wasn't much snow at all on the summit area and I could see a path running along the ridge. I followed it along north for a bit to see where it went, but once it disappeared into snow I just headed down the west side of the hill again to rejoin the track and head back the same way. I think it would have been easy enough to go down the east side too and join a track down there which went back to the single track tarmac road and that would have given a circular hill walk, but I can do that another time. 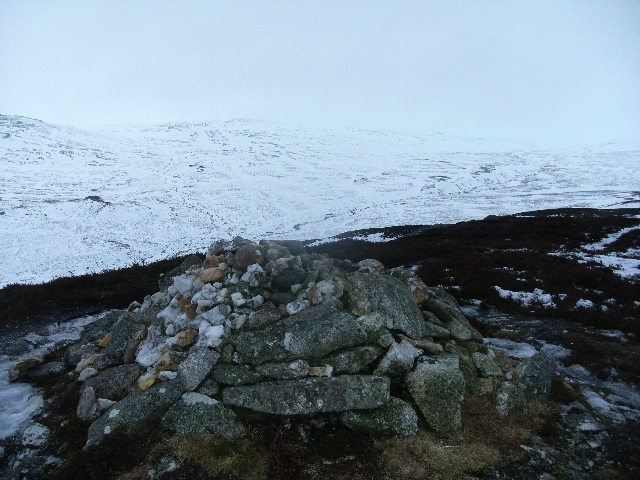 At the summit, still not great views to the north/ north west 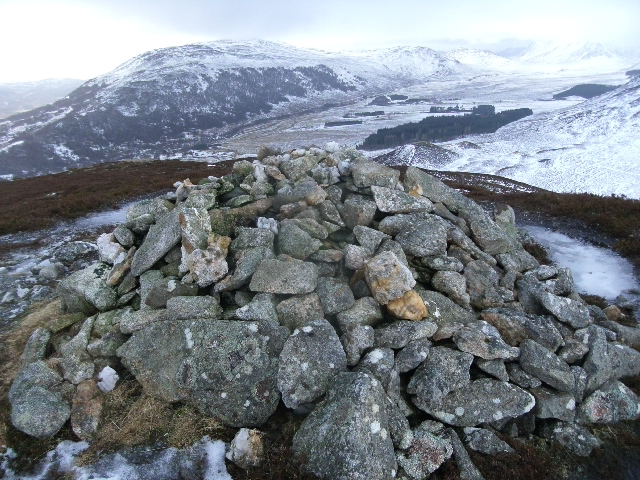 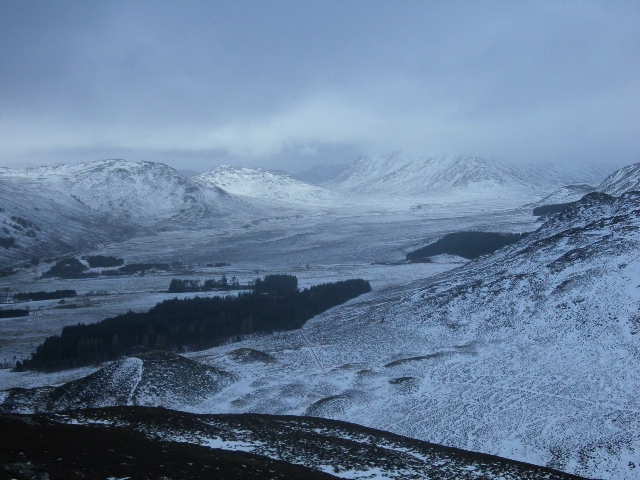 The hill in the middle of the picture is Creag Bheag to the east, next to Kingussie. (There are actually 3 Creag Bheag's all within walking distance of the town centre, but that's the most popular one) Looking back at Creag an Loin from the SW on the walk back to Newtonmore. Would be straightforward to use this side for ascent or descent to make a circular walk

I got back to the car and was going to drive straight back to Inverness, but I still had most of the afternoon left, the weather was improving, and I've done so few hill walks recently I didn't want to waste the chance for another wee 'un. So a look at the OS map, and I decided to stop at Slochd to do a little hill there that showed tracks going to the summit.

our_route.gpx Open full screen  NB: Walkhighlands is not responsible for the accuracy of gpx files in users posts
In all the hundreds of times I've been up and down the A9 since I moved to the Highlands a few years ago, I've never stopped at Slochd - so I'm glad I've finally done it now and have seen what lies below and around the main road! The snow was much deeper in this area and although the A9 was clear, I wasn't sure about the bit of old road which loops down to Slochd, so I parked near the start of it at it's southern end which again would give me a bit more distance rather than just going up the hill directly. Turned out the road itself was okay, and used more than I thought as it seems to be a popular place for skiers. A few cars were parked under the A9 road bridge and I saw people packing up their skis into them there, then further along, reaching the buildings of the lodge and cycle shop there was a bigger car park, the cars here being those of a few cross country skiers using the tracks of the hill I was going to - Carn Bad nan Luibhean. View of the transmitter on the forested hill. Could easily park right beside the hill for a shorter walk though! I've driven over that bridge hundreds of times (the A9), but this was my first time ever going under it. Crossing over the railway line on the road bridge ...then from the car park by the lodge, going along this track to cross back over the railway line Never get to see this viaduct from the A9 Once across the bridge over the railway, the track branches and I took the left one to start heading uphill

Apparently Carn Bad nan Luibhean, classified as a HuMP, is the 6802nd highest peak in the British Isles and the 4699th tallest in Scotland - so it's not a towering mountain by any stretch of the imagination. In summer, I expect it would take no time to walk up the good tracks from the car park to the top. It worked out quite well then that I was doing it in snow as that certainly required more effort. A few cross country skiers on the lower tracks ...I didn't see as many higher up in the deep snow. I stuck to the track here, though probably could have gone straight up the slope aiming for the transmitter here, it was pretty deep snow either way I don't think the skiers like walkers stomping along their smooth tracks, so I tried wherever possible to walk in the centre of the forestry tracks or at the very sides. This became pretty much irrelevant at the tracks higher up where fewer skiers reached and the snow was much deeper; I just tried to walk anywhere where I stayed knee deep in snow rather than thigh deep. It was difficult walking around the summit area due to the depth of the snow. Pretty sure no-one had been to do any work on the transmitter recently.. Looking over to the Cromdale Hills I think? Headed further over to try and get a view of the A9 heading through Slochd... ..but the view in the other direction to the Cairngorms was nicer The summit area is quite flat, has a transmitter compound on it, and doesn't seem to have any actual summit marker from what I could see. The northern end looked a bit higher so I had a wade through the snow to have a look down on the road and railway line from there. In less snowy conditions I'd have taken a longer route back using tracks continuing around the southern side of the hill, but I just retraced my route back this time to make sure I wouldn't be walking back along the road at dusk. A surprisingly enjoyable walk, and interesting to see the Slochd from some different angles! Milestone passed on the walk back to the car


Cnoc Corr Guinie, nice easy one in the snow

Up Meall Fuar-mhonaidh in the snow, from Allt Sigh

Carn an Fhreiceadain in lockdown, snow and sun

Burghead to Lossiemouth (and back) - Moray Coast Trail

Findhorn to Burghead (and back) - Moray Coast Trail