Route: Aonach Mòr and Beag via the Gondola

Packed up and left Glen Nevis pretty early after 2 great days of walking there ... I'd considered doing 2 remaining eastern Mamores from the Kinlochleven side, but as I was needing to head home, I decided to leave those for another time and do Aonach Mor and Aonach Beag instead, as I'd be passing them as I set off north. This meant doing them by the Gondola route, but I had no desire to miss out on the exercise of walking up and also no desire to pay for the Nevis Range car park at the gondola, so decided to make a much longer walk for myself by doing it from the North Face car park at Torlundy. Took 2 hours in total along good forestry tracks to get to Nevis Range and onwards up the mix of paths alongside the mountain bike runs, or heading up rough ground, to get to the upper gondola station where the WH route starts from. 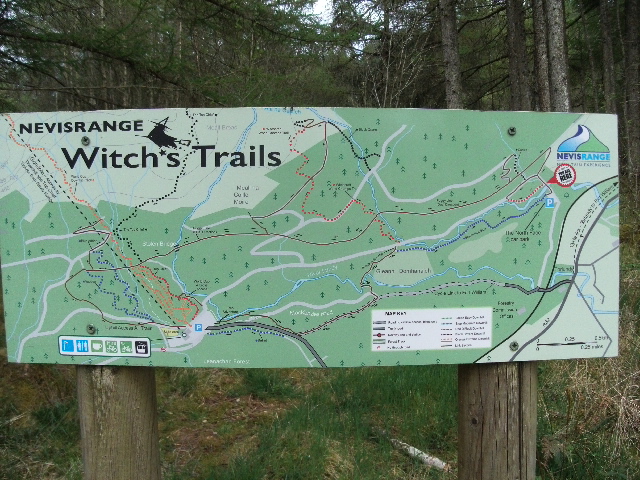 The gondolas weren't operating yet, I think it was 0930 they suddenly started up but I was in sight of the top gondola station by then. Lack of transport up explained why there were no mountain bikers on the downhill runs as I walked up, so with hindsight, I could have walked on the mountain bike track if I'd known I wasn't risking a collision before that! Rough tracks and paths beside the downhill tracks ended above the trees, but I took a direct line up rough, boggy vegetation from here towards the upper gondola station rather than walking up the mountain bike track View back down from near the top gondola station, gondolas started up just after this photo. Going up the slopes aboe the gondola station, amongst the ski lifts and tows, looking down to Fort William and Loch Eil

Wonderfully impressive sight down into Coire Choille-rais and along the corniced edge of Aonach Mor when the steep slog up the slope finally got to the top of the ridge. From there, it was a lovely easy walk (in these clear conditions) to Aonach Mor's summit and then down to the bealach between the 2 hills. Stunning views into the still-snow-filled Coire Choille-rais. Not visible in this photo, but there was a set of footprints zig zagging up the snow from Coire Choille-rais which seemed utterly insane given the avalanche risk. Heading along the edge of Aonach Mor's plateau The zig zagging footprints came out on the top plateau here. Don't know if it was an ascent or descent route .. I wouldn't have fancied it either way Continuing along the plateau towards Aonach Mor's summit cairn, Carn Mor Dearg and Ben Nevis lie off to the right 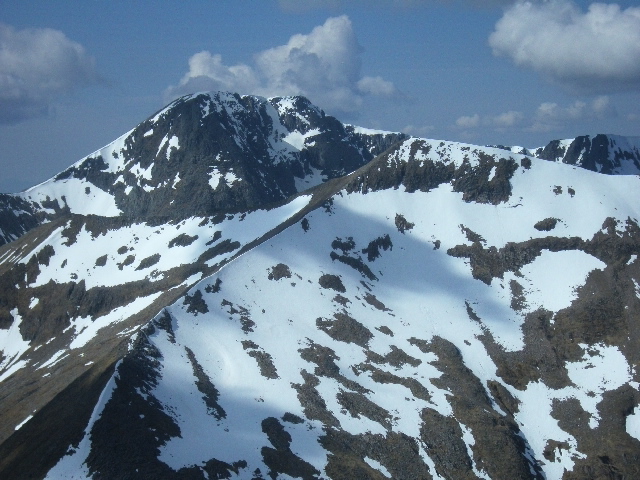 Heading up Aonach Beag was easier than it looked from a distance, with a path zig zagging up the rocks. The summit area was still covered in snow, and with the small summit cairn being on the edge, it was difficult to accurately tell where the exact summit was and where the cornice started. There were just a handful of other footprints from the last couple of days, all tentatively stopping around the same place I ventured to before retreating. It looked like the high point, at least to a couple of metres. 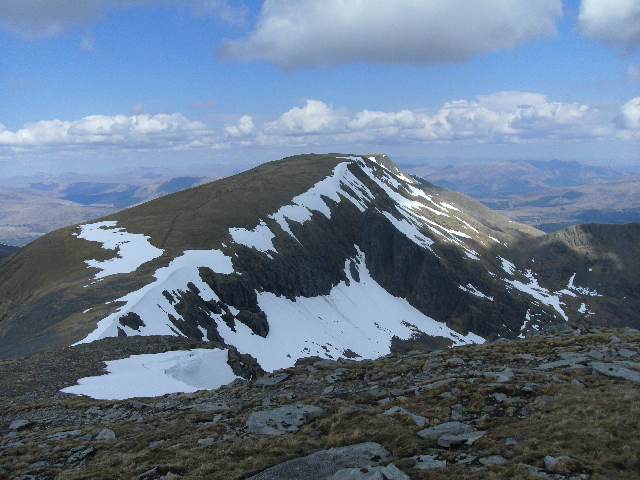 View back to Aonach Mor as I headed up Aonach Beag The Mamores to the south of Aonach Beag's snow covered summit Ben Nevis and the CMD arete As I headed back down to the bealach from Aonach Beag's summit, I noticed more tracks in the steep snow dropping down the eastern side ... Gondola in full flow by this time, quite a few mountain bikers taking the easy way up :)


Ring of Steall - Day 2 in Lochaber

Navigating the far end of Strathfarrar

A windy one on Creag a' Chliabhain again