Carn na h-Easgainn is so close to Inverness and so easy to get up and down in a short time from the usual Lynebeg start point, that any hillwalkers in the area have probably done it a dozen times. Starting from Dalmagarry farm further down the A9 (or going via that on a circular route) makes a longer walk, but in these times of staying local and trying to find new ways up old hills, I decided to try and do it from the other side for a change, starting at Farr to go up the west side of the hill rather than the east. Although a change of route can be nice, having now been up that way, I won't do this route again! (unless I ever feel the urge to cycle to a summit, which is highly, highly unlikely!).

As usual for the handful of local grahams I've done in the last couple of weeks, I didn't bother setting off early, so only started the walk at lunchtime. There's parking in Farr in the woods, then the track I was taking starts by the playground, crosses the bridge, passes a couple of houses and then becomes a forestry track into the woods. This first stretch through woodland and alongside the river is quite pleasant. Once past the couple of houses, the track becomes a nice one through the woods 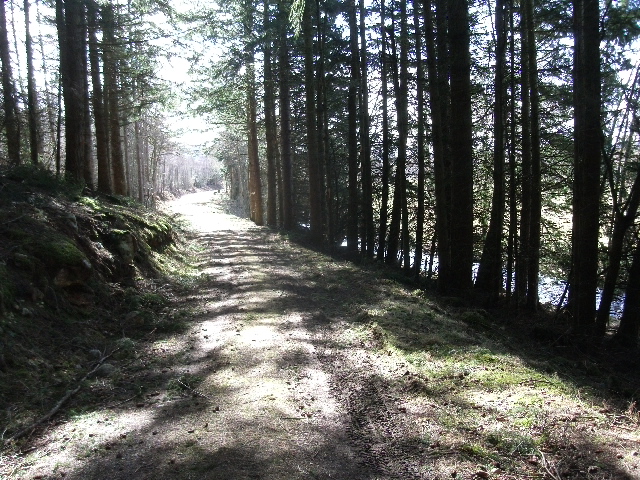 River on the right as the track continues on

The track then merged onto another "track". On my map, it just showed as a track but of course that can mean anything from a faint grassy track to a stony estate track to a superhighway windfarm construction road. This was the latter. I knew my intended route would take me up via Farr windfarm, but what I hadn't realised is that another big windfarm is being built next to it. I've seen the compound for the Glen Kyllachy windfarm just off the western side of the A9 near Moy, but I didn't know the road from there came round to this side of the hill and up the route I was taking. Woah! I didn't expect the wee track on my map to look like this... 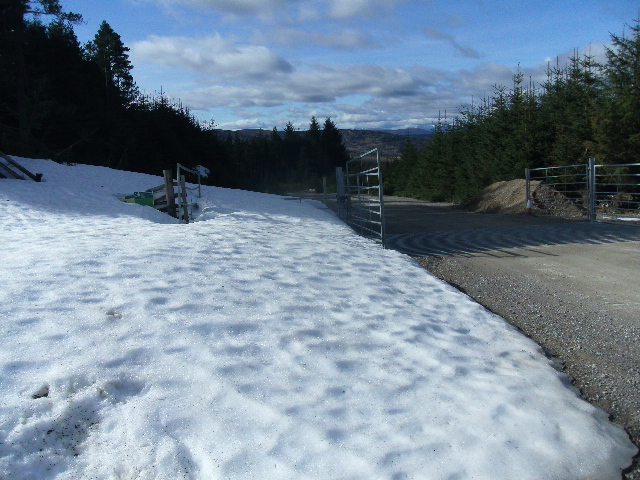 The track bends and goes up the hill, quite a lot of snow still in the shaded parts

Fortunately not too much traffic was on it; in the whole walk, there and back, a total of 5 pick-ups, 1 van and 2 lorries passed me, all drivers giving a friendly wave. It wasn't the most enjoyable of hill walks though. I went up the hill on the access road to where the track splits, left to the existing Farr windfarm and its dozens of wind turbines, right to the Glen Kyllachy construction site. I headed left, Carn na h-Easgainn in sight but a roundabout way to get to it going round the windfarm roads. Highlight of the walk was seeing a cheeky wee pine martin pop up onto the track 4 times to take a look at me , diving off into the ditches and heather as soon as I tried to get a photo. With hindsight, wished I'd gone up one of these hills today instead! Tried to look at nice clouds to distract myself from the wind turbines! Anyway, it was a much longer route than I thought going by the windfarm roads, (and a relief just to get on the smaller estate track to the summit) so by the time I got to the trig point, I just turned and headed back to get back to the car by dusk, wishing I'd started out a bit earlier and worn trainers instead of walking shoes! One more turbine to pass... ...then just following the estate track across the moor to the summit 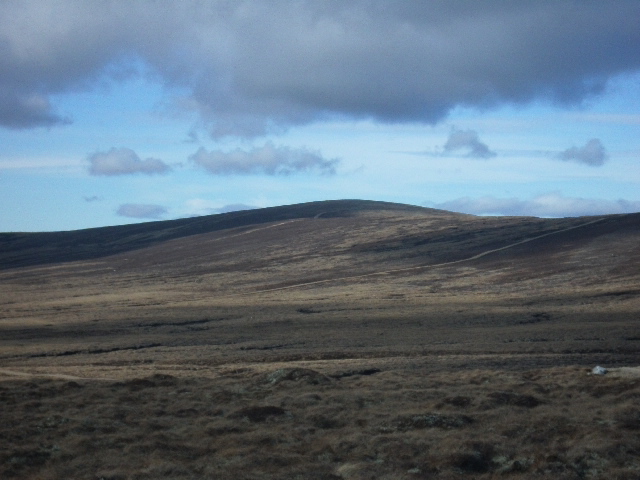 Even without the forest of wind turbines, it's not the most stunning of mountains! Wind farm map - need to head for the ones numbered 4XX (on the right of this map) to get to the estate track to the summit, I took a couple of wrong turns on the way before I found the right way through

Not a route I'd recommend for walkers, but maybe okay for anyone fancies cycling up a graham.
Click to mark this as a great report. Register or Login free to be able to rate and comment on reports (as well as access 1:25000 mapping).