Ben Lomond - am I brave enough for Ptarmigan Ridge?

On checking the mountain weather forecast for the weekend, there was a pretty similar pattern across Scotland - gale force winds on Saturday, calm and sunny on Sunday. That made my decision about which day to go hiking pretty straightforward, and given that I had to be in Glasgow on Sunday evening, meant that instead of heading up my closest stomping ground, the Cairngorms, the most logical choice was to head down to Loch Lomond so that I could get the most out of the day. 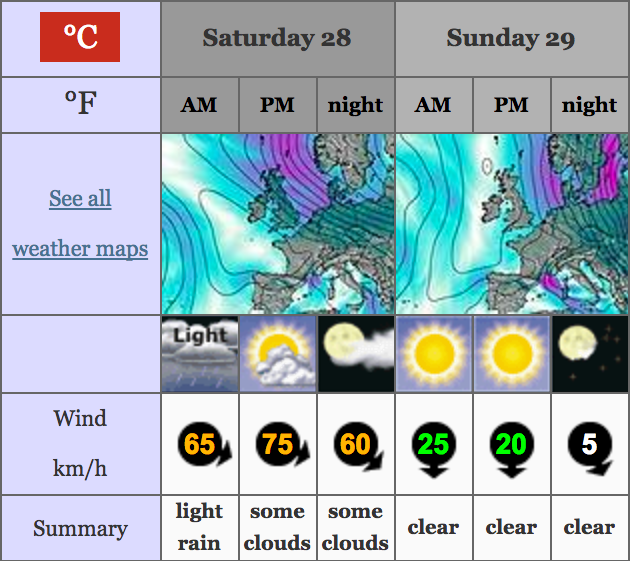 The clock change worked in my favour and made it easy to get a good start on Sunday and by 9.45am I was at the car park at Rowardennan and grumbling slightly to myself about the number of cars already parked there. As I watched a bus disgorge a large number of passengers I worried that my choice meant that I'd be tripping over people all day and wondered if I'd made a mistake in my choice.  The presence of two families parked next to me with a collection of children and dogs, all chattering/barking incessantly made me glad that I'd spent quite some time reading the walk reports and had already decided to hike the route in reverse - climbing up by the Ptarmigan Ridge and returning back via the more populated tourist route. This turned out to be an excellent decision as I exited the car park in the opposite direction to everyone else and very quickly left the clamour behind.

I headed out along the shore of Loch Lomond, soon passing the memorial which I stopped to photograph, particularly enjoying the reflection of the trees on the sculpture. 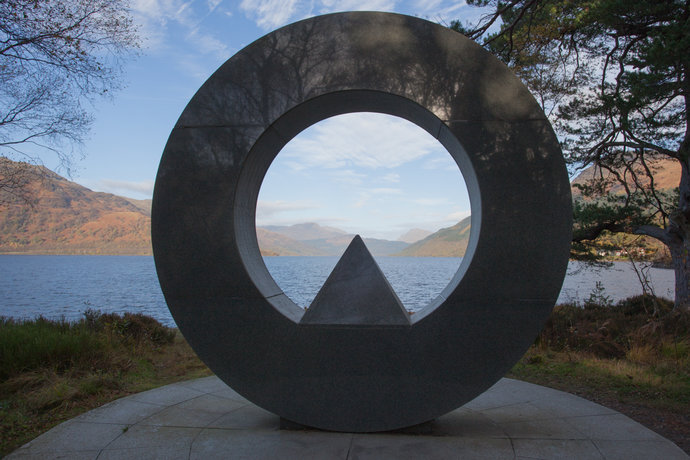 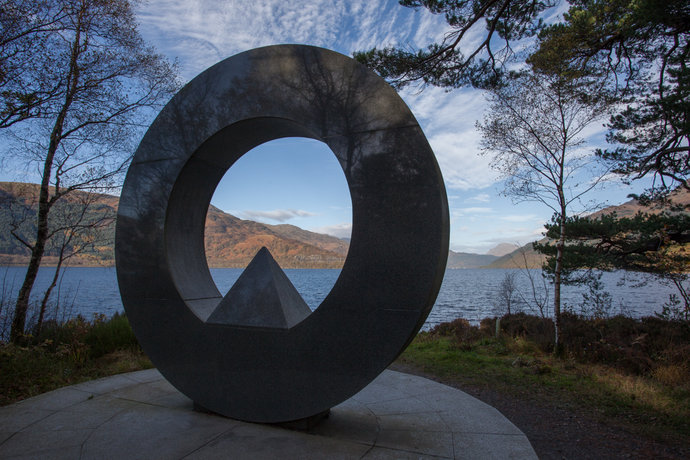 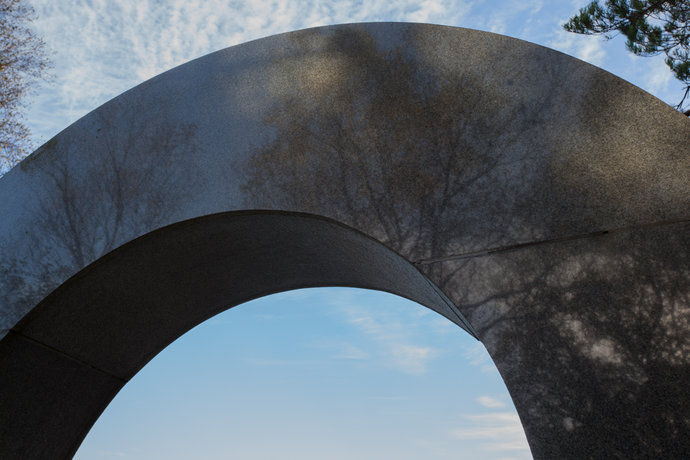 The weather was showing every sign of living up to the forecast's promise, and although it was cold enough that I started out with my fleece and hat, I was soon overheating and packing them back into my bag.

Reaching the Rowardennen Lodge Youth Hostel, I was a little unclear where the path went and felt a bit embarrassed wandering around looking for it whilst people were sat outside chatting. Fortunately this must happen often as I soon found a sign pointing me back towards the car park where I found another sign, complete with a very relaxed robin on top, which let me get close enough to get a few photos with my wide angle lens. 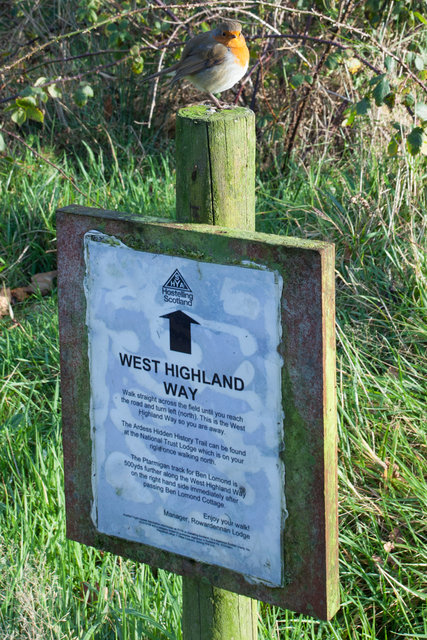 Following the sign I quickly found myself on a track heading into the woods. I knew that there should be one more turn off, which I found just after passing by a little stand selling bottles of water. The sign blended into the trees, so you had to be on the lookout for it. 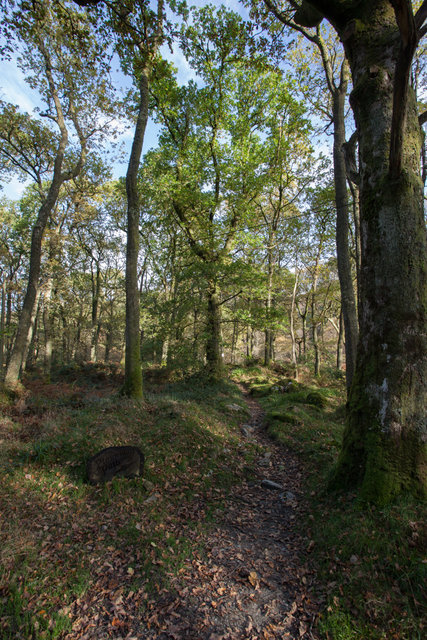 Now that I had left the West Highland Way and was officially on the Ben Lomond route it was very quickly time to leave the woods and start climbing. There was a clear path through the grass and bracken which took me past what looks like the ruins of an old dwelling.

As I climbed I stopped numerous times to photograph the view behind me down to Loch Lomond, breaking one of the cardinal rules of photography that you should never take a photograph into the light. Tough luck, that's generally where the views were! With each little bit higher the perspective changed and yet another photo was warranted. 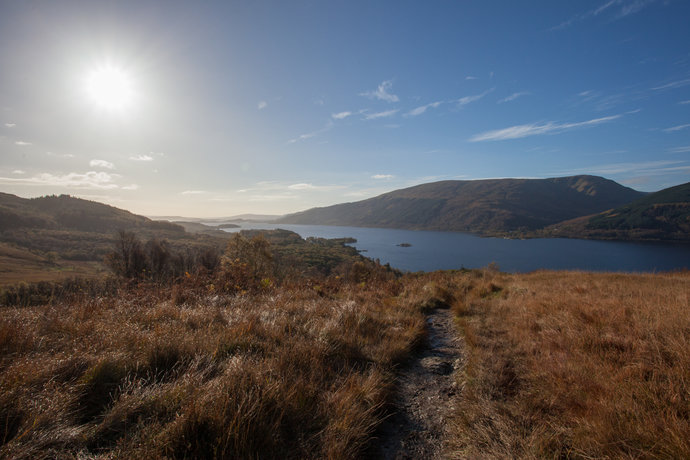 As I climbed higher, Loch Lomond receded further into the distance and the view ahead began to open up to the mountains on west side of the loch, including good views of The Cobbler, another hill yet to be climbed! 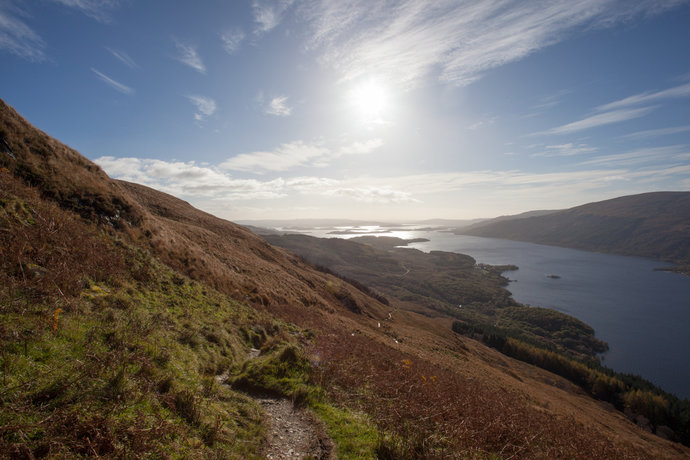 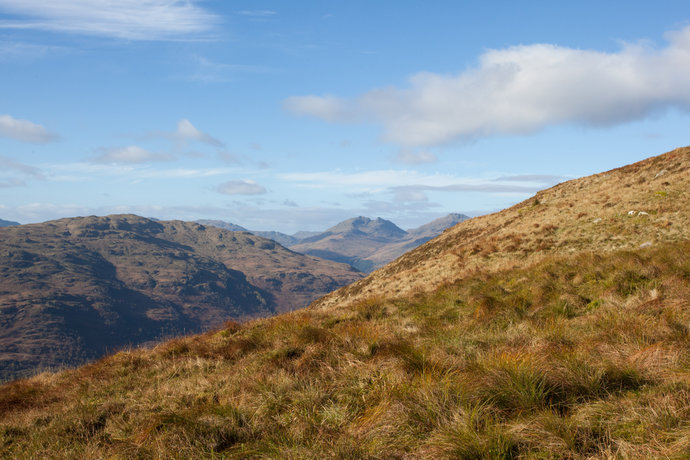 Earlier I had a spotted a group of four along with a dog slowly catching up to me each time I stopped for a photograph. As we approached the climb up to the ridge I stopped to let them pass, worrying that I find it stressful having them on my heels when we got to the toughest part of the hike. One of my biggest uncertainties when setting out on the hike was how I was going to cope with the actual ridge, not having anything like a good head for heights. As it happens the ridge was still a little further ahead than I originally realised, but the worrying was beginning to niggle at me. The path started zig-zagging in earnest now and the loch looked ever more remote as I turned around for yet another photograph. 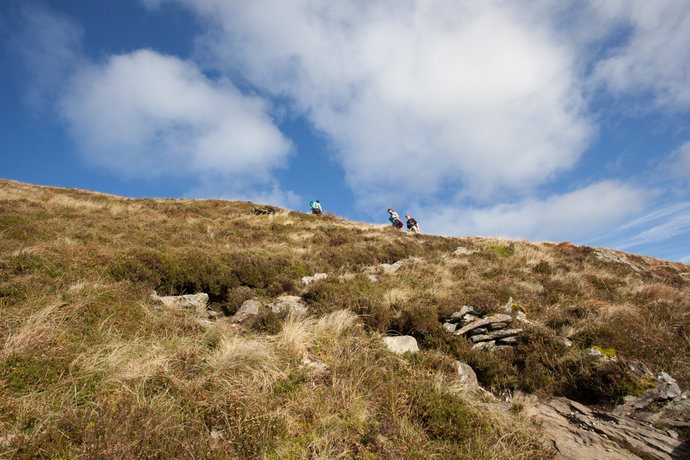 Finally, the view of what was to come opened out in front of me. I stopped and gulped a little when I realised that where I needed to be was a summit over to the right of me, and yet at the moment I was still climbing the summit in front of me. Clearly what lay between was the ridge, but I didn't yet have a good view of what it was going to involve so I did my best to just focus on the climb ahead and worrying about the ridge when I got a bit further. 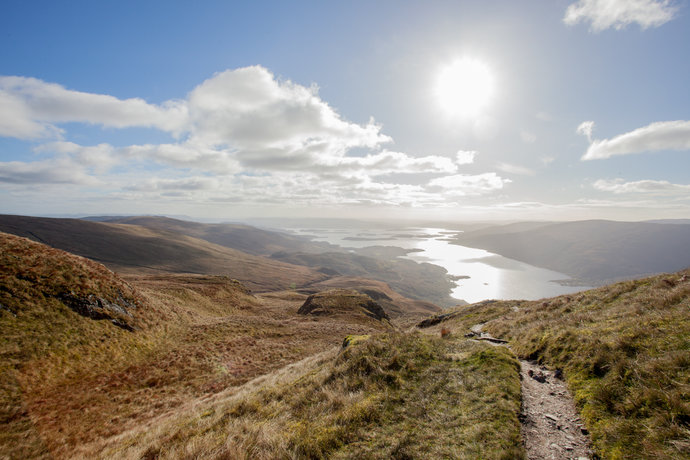 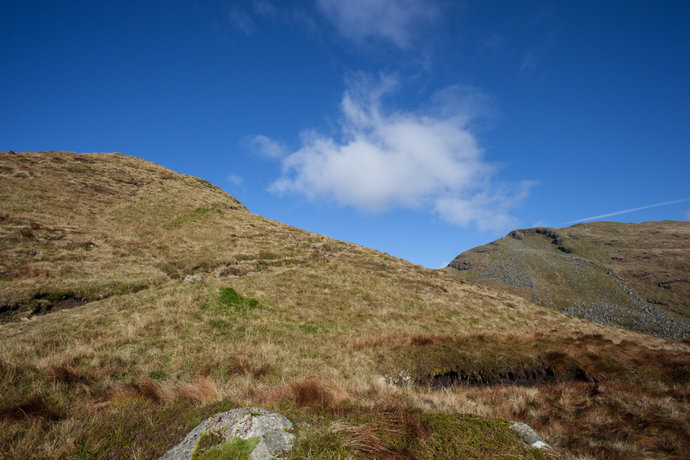 By this point I was beginning to meet quite a few people coming down from Ptarmigan, including a few kids. I did think to myself 'well, if they can do it, surely I can', but then logic never does have much place when it comes to phobias! Having been sheltered most of the way up, it was now getting quite windy and with a temperature near freezing at the top, time to get the woollies out again.

I could now get a view of the ridge but couldn't see where the path was. I was getting quite nervous at this point, but kept plodding upwards and reassuring myself that I could handle whatever it had to throw at me. 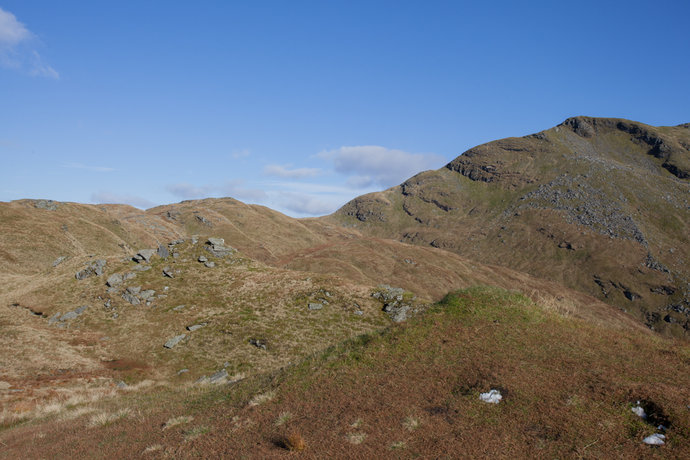 A little lochan provided a bit more photographic distraction along the way as I turned my back to Loch Lomond and headed inexorably towards the ridge. 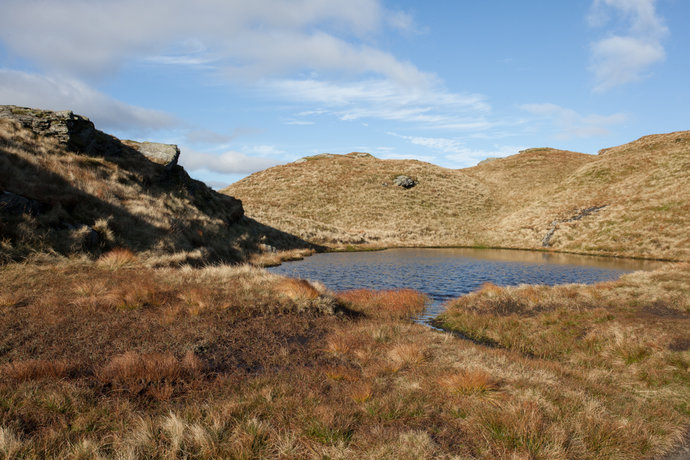 Over the first wee summit and the ridge opened up to me finally. Hmm, well it's not too bad, I thought. Not so much of a ridge with steep drops to either side as something rather steep to get myself up. 'I can do this', muttering to myself reassuringly. 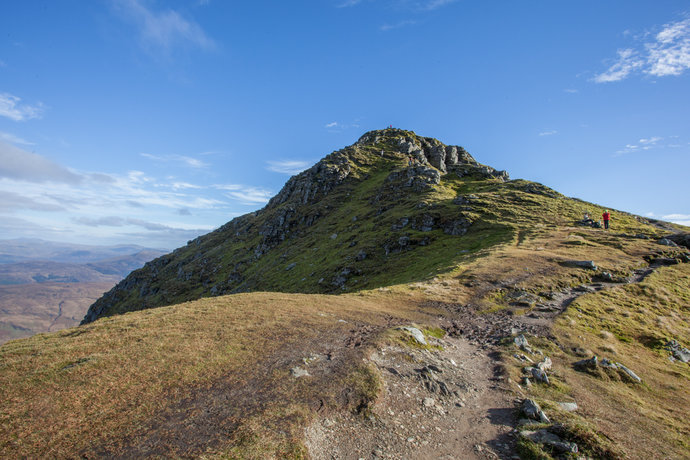 One last photograph behind me and it was time to put my camera away so that I had free hands for the scramble and nothing flapping around to get in my way. It was beginning to look like a long way down. 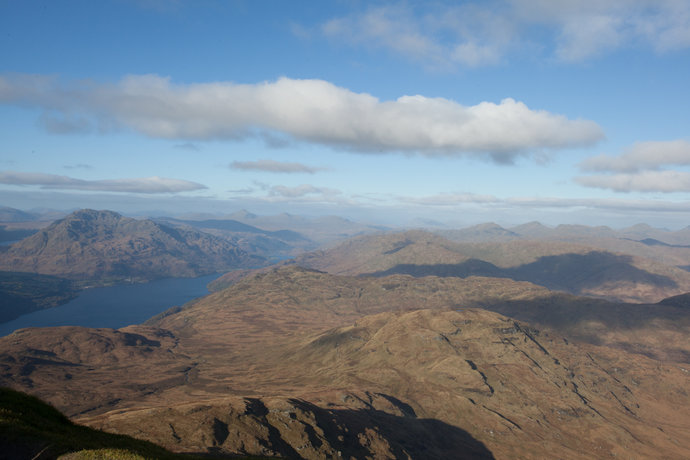 No photos, therefore, of the actual scramble. Some of it was fairly decent, albeit steeply zig-zagging path. My heart was beating pretty fast by this point, a combination of fear and exertion. When I saw people coming down towards me I waited to let them get out of the way. I was terrified of finding myself in a position I was uncomfortable with and having to wait for them to pass. Then, I could see the top, one last scramble and I should be there.

No, a false summit. I had to stop a little and let my breathing settle before tackling what I really hoped was the final climb. Some of the gaps between the rocks were quite large and hard to manage with my short, wobbly legs and I had to fight back the panic when I couldn't quite figure out where the path was leading, but I carried on. One thing was for certain, going back wasn't an option!

One last haul and I found myself on the summit, trig point in front of me, and a surprising number of people hauled out eating their lunch. I'd done it, and I was pretty pleased with myself for facing up to my fear. 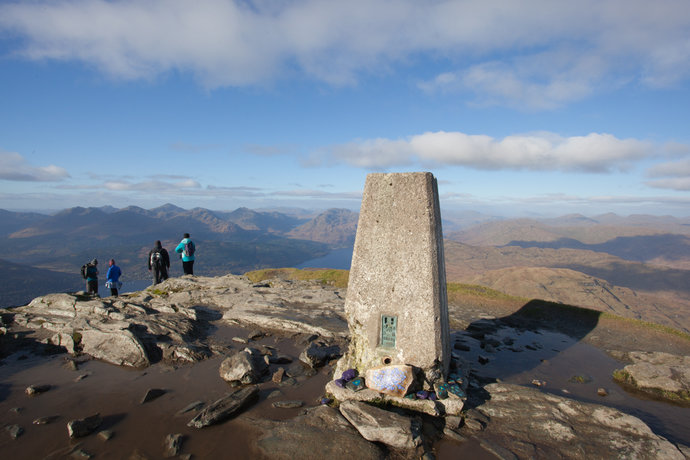 I didn't hang around for long, just enough to take a few photos and eat my lunch. The busload of people I'd seen in the car park turned out to be fundraising for Alzheimer's Scotland and were filling the summit. I wanted to start heading down before I got stuck in the crowds, and the gorgeous views weren't enough to compensate for the large number of people. 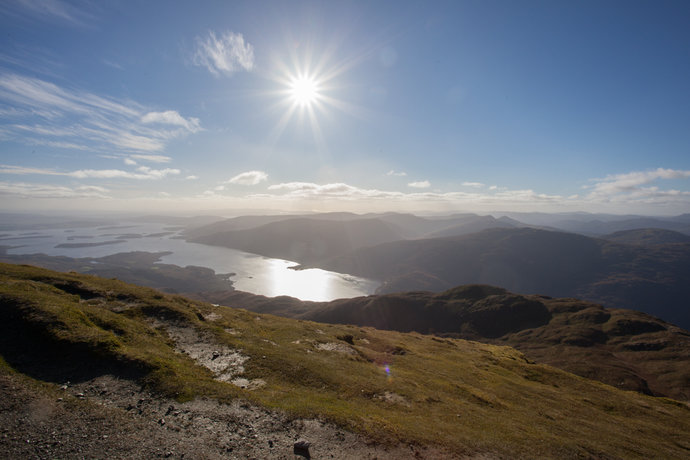 The path down leads worrying towards another ridge and I did think to myself 'you've got to be kidding me'. Fortunately it wasn't too intimidating and we quickly left the ridge to start dropping back down to the loch. 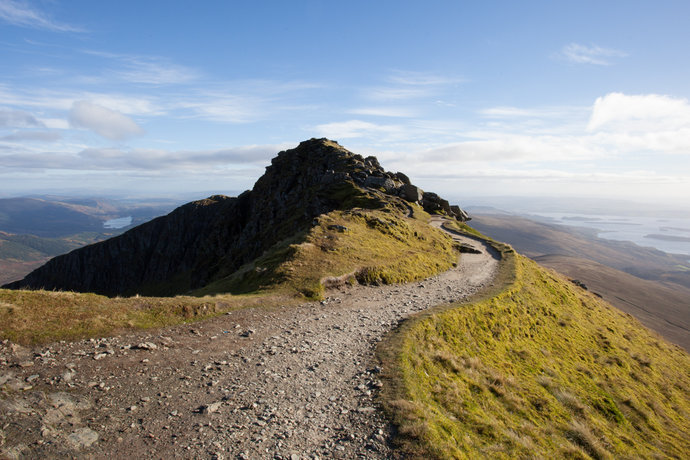 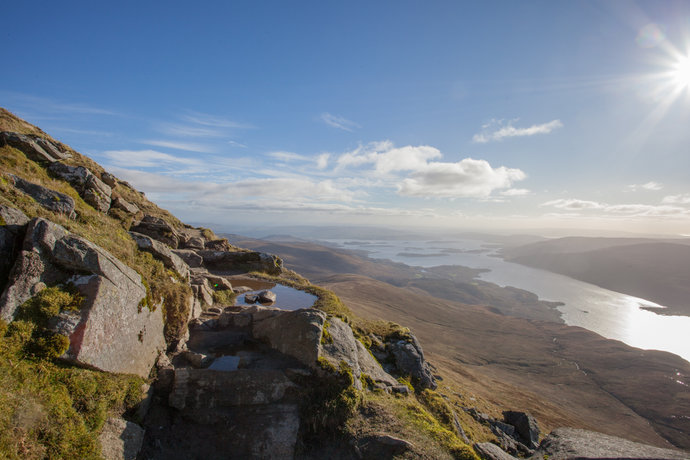 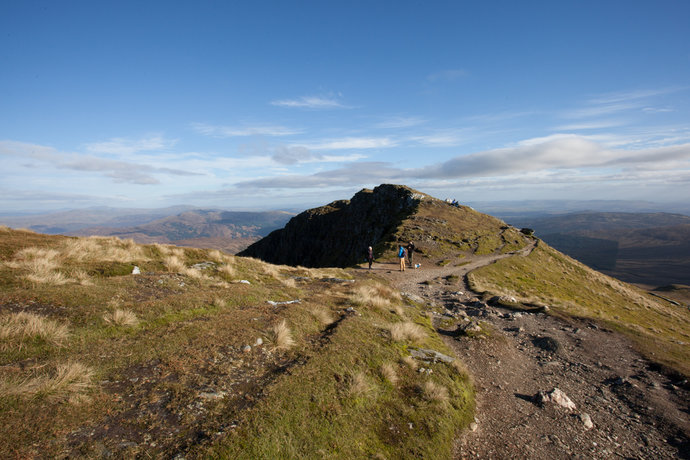 Although there were quite a few photo stops on my downhill journey the views weren't as good as on the way up and I'd certainly recommend taking the Ptarmigan route rather than using the tourist path both ways. The late afternoon light, though, was fantastic. 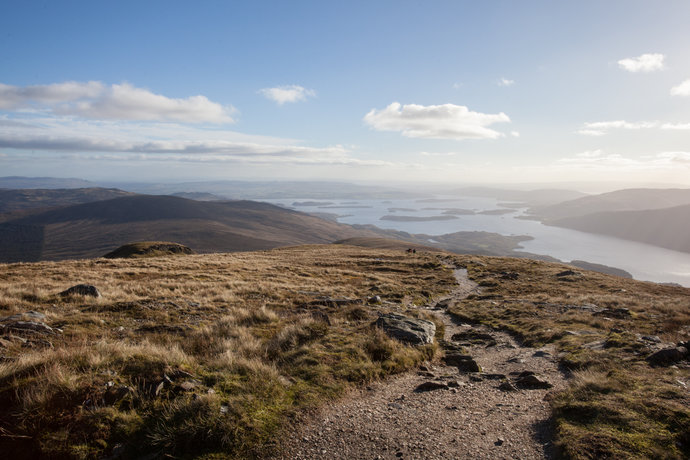 The way back down was rockier than the Ptarmigan route and I didn't find it very comfortable for my knees or my right ankle, which has been misbehaving the last few weeks. Not only was there a fairly constant stream of people coming past me downhill, but also a fair number of people still heading uphill and a few cows on the path for added entertainment. It certainly wasn't as peaceful as my morning had been. 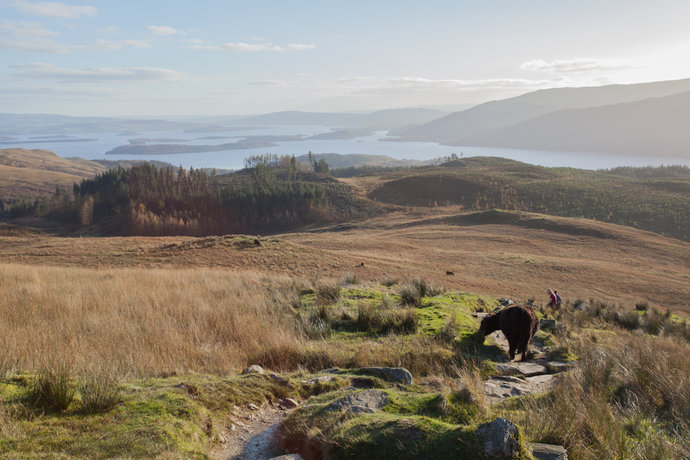 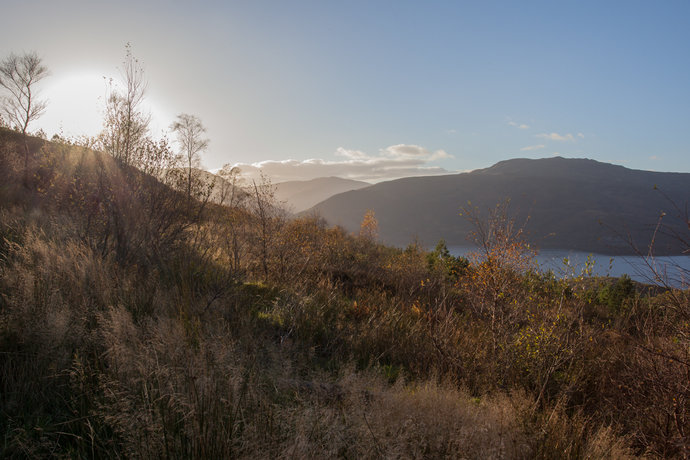 I returned to the car park almost exactly 6 hours after setting off - a bit longer than the suggested time of 4.5-5.5 hours, which was not surprising given all the photos stops and my slower pace and hobbling coming back down again. An excellent day out even if Ben Lomond is a bit too popular for my liking!
Click to mark this as a great report. Register or Login free to be able to rate and comment on reports (as well as access 1:25000 mapping).