This hill is quite remote and can be accessed from either the head of Loch Etive or from Victoria Bridge near Loch Tulla, Bridge of Orchy. The route in from Glen Etive duplicates the routes on Ben Starav and Glas Bein Mhor and is quite a long hike too, so I decided to use the bike from Victoria Bridge. I like to use my bike where I can because of the arthritic knee, so that seemed the better option.

You can see the profile etc., details on
http://connect.garmin.com/modern/jsPlayer/572331649

Drove up from Glagow and got into the car park at about 8.30am. This place is infested with migies

. Out of the car, put on hat quickly, took bike off roof, put on boots and checked rucksack and got mooooving as quickly as possible. Note for the future. Put on insecticide before getting out of the car!!! Also forgot to switch on the Garmin because of the wee buggers. I must say I feel sorry for the West Highland Way Trampers who camp out round about here.

Anyway, biked all the way to the Clashgour cottage and duly dismounted as requested to avoid running down children, dogs and hens, then found my way down to the river through a low security gate. Aah, got to cross the river here. You will understand that I am not very attentive about detailed route planning. Never mind, even though there has been some rain recently, the water was only about 18 inches deep and some kind person has thoughtfully provided some large stepping stones I am getting quite good at using the bike as a prop while I step over stones. Moreover, I DID NOT fall in and the bike was needing a wash anyway.

However, a few hundred yards up stream, discovered there is a foot bridge. More of that on the way back.

From there up the glen, the track is the usual stalkers standard. Quite walkable and really not too bad for biking. It also seems that this is a designated Right of Way, according to various little signs. The Scottish Rights of Way Society website is worth a look. See http://www.scotways.com/

Quite a pleasant morning so far, if a bit chilly for the middle of August. The forecast was for zero deg C overnight and occasional light showers during the day, with it being cold on the tops (generally is, anyway, in my experience). 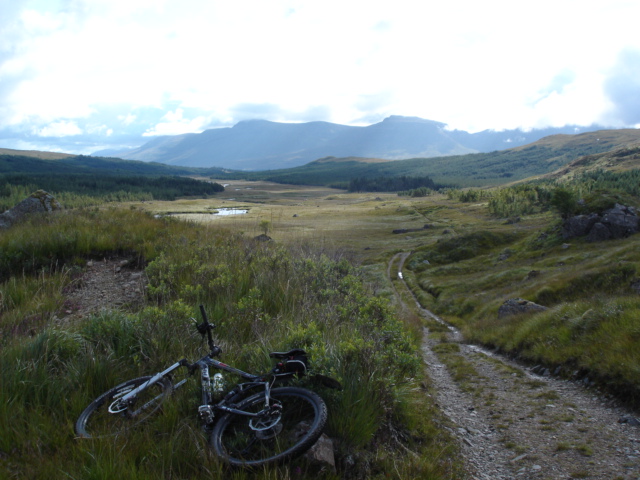 Just been there (Looking East towards Victoria Bridge)

This glen is very scenic and tranquil. Loch Duchard was twinkling in the sunshine and fishermen's boats were bobbing around their moorings. Why not spend the day here and avoid toiling up a mountain? Perish the thought. Get on with it.

Dumped the bike at the top point of the watershed. (marked as Coire Beithe on the map). There is bit of descent to be done here before tackling the hill proper so I saw no point in pushing the bike back up. This is not exactly Sauchiehall Street on a Saturday afternoon so probably no danger of anyone nicking the bike or letting the tyres down. Unless, of course, a sticky fingered game keeper were to take a fancy to it.

Talking about such, I did try the estate phone number before I left, as the stalking season has started and this must be prime deer country, but only got an answering machine. No recorded message. However, there is a little sign at Victoria Bridge which says, in the absence of other information it is OK to go, provided you stick to the paths. I wasn't sure which estate Beinn nan Aighenan is actually in but I went anyway. In the event, I saw no estate types, landed gentry, hooray Henrys, stalking activity or deer, all day, though there is a shooting lodge in Glen Kinglass.

I had planned to access the hill via Coire a Bhennien, and stuck to that but, beware, it makes the route longer and involves about 150m of descent and re-ascent on top of what is a long day out.

Also, when I got higher, I realised that there is a bridge over the River Kinglass a little further down from where I forded it. This would be useful knowledge if the River was in spate. The bridge is not visible from the Right of Way path.

There is a poor and steep stalkers track up into Coire a Bhennien but I reckoned that was better than the extremely steep East face of the shoulder that runs east to/from the summit (no path). Also be aware that it took me 3 hours to get to the start of the ascent just above Glen Kinglass Lodge. Walking would take much longer, despite anything Nasmith says. 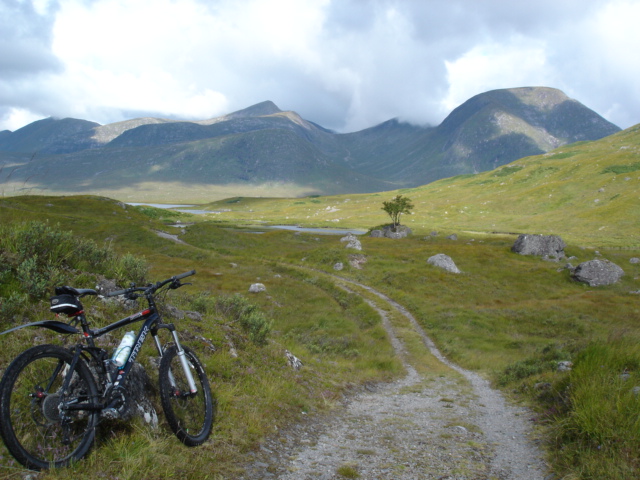 and going there (Westwards) 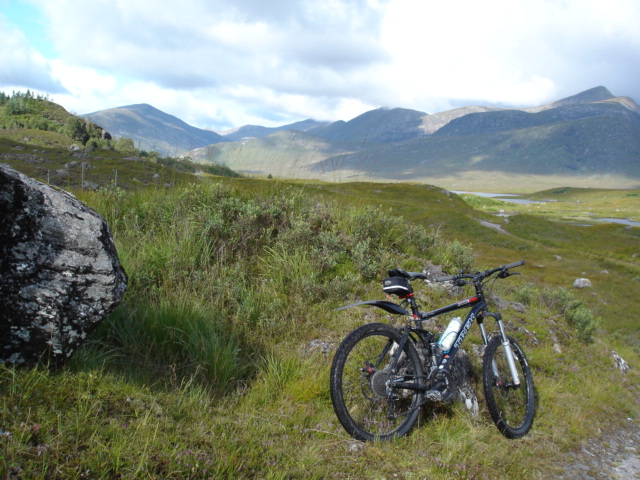 and there ( Beinn nan Aighenan is on the extreme left)

At the point where I branched off the main path to head up the hill, there are some inviting looking rock pools on the River Kinglass, just inviting one in for a dip but I didn't have time or a towel.

The climbing part of the day was fairly uneventful and not even too sweaty because of the cold. There were a couple of light showers but generally the hills were clear all around. One feature of the hill is that although it doesn't have spectacular coires it is the 'barest' rock if have come across in all my 93 Munros so far. Above about 450m there is very little soil or vegetation. This leaves large expanses of bare rock with glaciation striations clearly visible.

From the summit there is a good view down Loch Etive and beyond, and Ben Starav, Glas Bheinn Mhor, Stob Coire Albannaich and Meall nan Eun are all there. For the dedicated, these could all be done together but the delights af a bivi tent and re-hydrated Chilli con Carne are not for me. 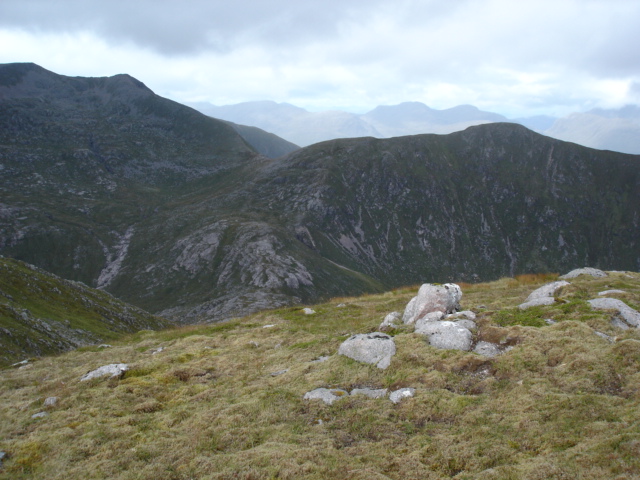 If approaching from the head of Loch Etive, this is is your route, 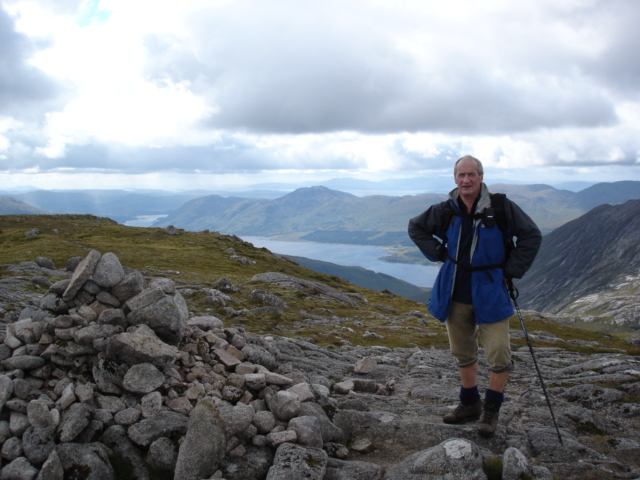 What the well dressed hill walker is wearing this week end. (On the summit with Loch Etive behind) 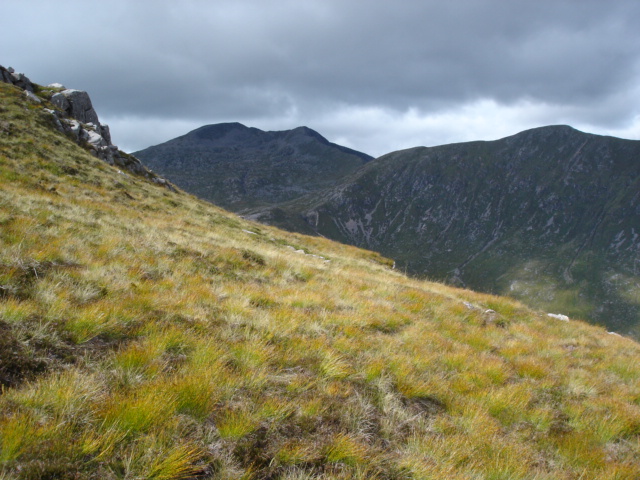 The descent and return were much as the outward leg though I did shorten the route by following downwards, the shoulder to the South East. Beware of the hump at 160 405. To avoid the ascent, of about 75m, I tried to skirt around the south side and ended up doing some tricky scrambling over the steep slabs. Better just to go over the top. At the end of the shoulder you have no choice but to descend the steep grassy sope (partly on backside) to the point marked on the map as Innseag na - lurniche (don't know what this means). 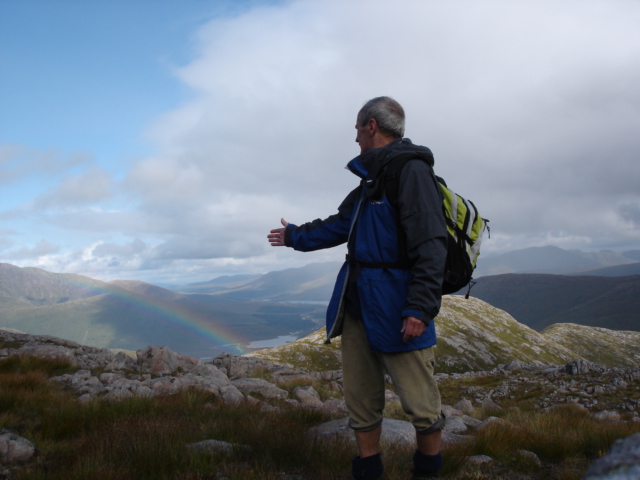 Pot of gold is over there

As I was descending the hill I did meet a couple who were doing much the same route as me (with bikes). They were still climbing at that point and I reckoned they were about 2 1/2 hours behind me and running out of daylight. Hope they had torches. I got back to the car with only about half an hour of daylight to spare. If they actually continued to the summit, they would have had to tackle the bike down in the dark. Hmmmm! Just come down there (very steep)

Was looking forward to a free wheel down towards Clashgour but mountain biking is never quite as easy as that.

Oh, yes the bridge. The snag is the bog and the deer fence but I will leave that for the reader to find out for him/her self.

Total disatance on my Garmin was about 34km, Elevational gain 1,290 and Time 11 hours 10mins after adding on a bit for forgetting to switch it on. The FBs could do it quicker but I have to rest my bent leg occassionally and take in the ambience.

It should be possible to bike right down to the shore at Glen Etive but I am not sure what the track up to Kinlochetive is like. How people get into Glenkinglass Lodge, I do not know. Certainly no handy Tesco there!

If you want better resolution photos, you could look at my Dropbox https://www.dropbox.com/sh/jkkcdcreknfuub8/AABVFNeXCTrylvZjXfEjuDrMa?dl=0
Click to mark this as a great report. Register or Login free to be able to rate and comment on reports (as well as access 1:25000 mapping).