I'd been to Glen Affric a few times, at the Tom a' Choinich/Toll Creagach walk car park. Some wooded areas here but nothing much to speak of. Also,to the top end of the glen, which has a bare and unforgiving look about it. So i'd always wondered where Glen Affric got its title of " The Most Beautiful Glen In Scotland." Untill today!
I started from the car park at the end of the public road at 11.00am and headed along the track to Affric Lodge. Low cloud was breaking up fast, the sun was out but clag was still holding onto some of the distant peaks. The lodge was the starting place of the fine scenery. A good path veers right from the lodge and leads into the heart of the stunning Caladonian pine forest above Loch Affric. Kinda wished i'd chosen this route for my An Socach/Mullach na Dheiragain walk even if it is a few extra miles. The scenery would've jogged along my tired feet.

Lots of insects on the wing today, some nice to look at; Some not so nice; Fiendish clegg. Hopeful and trying her luck on my rucksack!

Yes, cleggs were out in their droves today, and I know from past experinces that a T-shirt is no barrier to their bloodlust. I reached the bottom of Coire Coulavie and took the path it houses. This tops out onto the ridge just below and south of Mam Sodhail cone. Thought this path would've been much wetter.

Struggled with the heat and cleggs, was glad when the remnants of the now lifted clag drifted in front of the sun. From the ridge top; A quick shimmy to the top of Mam Sodhail then sat for a bite to eat. A couple of other walkers had beat me to the top. Decided to do Beinn Fhionnlaidh next. Cut straight accross Carn Eige's west flank from the col and picked up on the far side path running north from Eige's summit. Dumped my bag at the foot of B.F. and wasn't too long 'till I'd topped out. Stopped and chatted to another walker en route. Loch Mullardoch from the summit. Now for what's possibly the hardest part of the walk, The ascent of Carn Eige ~ and my last Munro on mainland Scotland! Took the ridge route back via An Leth-chreag then dropped the 100 odd meters to Garth-bealach in what seemed like the width of 10 meters. The ridge to An Leth-chreag

Started descending from the bealach aiming in a generally straight line for the burn in Gleann nam Fiadh. Had some crags to negotiate before dropping down to the next step of Coire Mhic Fhearchair. 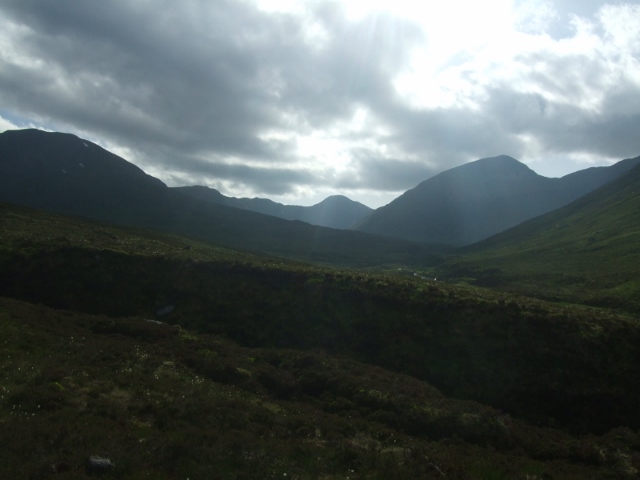 
Joined up with the path over the moor between Sgurr na Lapaich and the Am Meallan bump which meanders down to Affric lodge. Not as wet as I thought it would be.
Spotted a noisey raven harrying an eagle!

Too far away for pictures.

Also a red legged partridge family. The tiny chicks were pecking at the roadside when I stopped the car for a photo. Before I could get the camera ready they'd squeezed through and dissappeared like water into the vegetation.

I wasn't risking standing on one chasing them like some paparattzi (sp?) guy.

No photos there either!

Sgurr Dubh too much!