Finally, the news we had all been waiting for... High pressure over the mountains!

With such excellent weather conditions forecast for Sunday, I thought it would be foolish to miss out on such a rare opportunity. Met Office promising high chance of cloud free summits & low winds, I decided to return to one of my favourite hills in Scotland - Bidean nam Bian

This adventure begins with my alarm blasting into my ear at 0500...

I slowly came around, packing my lunch and eating breakfast before catching the 0700 bus to Glencoe! Unable to sleep on the journey up, I was able to enjoy the spectacular scenery as the early morning sun illuminated the highest peaks in a beautiful golden glow!

Arriving at the start point at 0900, I met up with the four others I would have the privilege of sharing this fantastic day with... Daniel, Rachel, Tatiana & Tigger (team dog) - members of the "Scottish Hillwalking & Activities Group"

We started walking at 0930, ascending into Coire nan Lochan. It was simply stunning! With views of massive snow covered peaks getting closer and closer it was becoming increasingly difficult to keep my excitement under control!

We reached Coire nan Lochan fairly quickly, breaching into the sunlight and its warmth!

Surrounded by towering buttresses & icy peaks it was shaping up to be a truly special day in the Scottish hills! 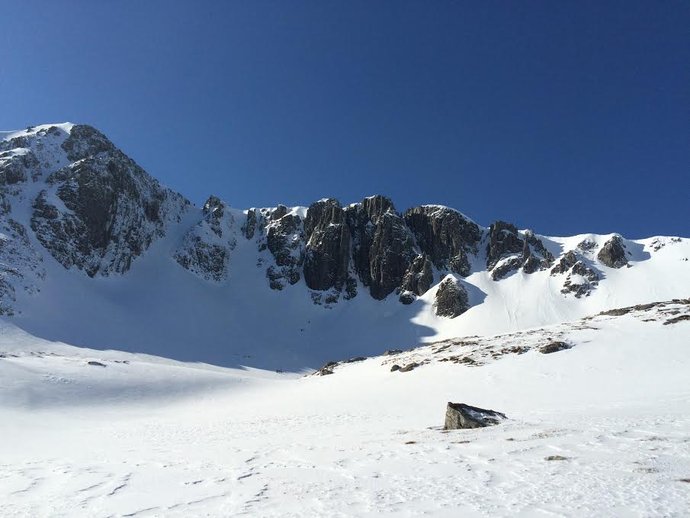 We ascended the corrie's western side wall in order to gain the North Ridge of Stob Coire nan Lochan... In perfect snow conditions we thundered up the slope in crampons, snapping pictures along the way! Feeling like we were in the heart of the Alps in mid summer, we all felt incredibly cool!

Posing for some actions shots along the way! Continuing along the North Ridge of Stob Coire nan Lochan, passing above the imposing Pinnacle Buttress & South Buttress! Continuing along the ridge, it was incredible watching numerous climbing parties topping out and breaking through cornices along the way!

It was beginning to get very warm! I was down to a base layer... in March?

We reached the summit of Stob Coire nan Lochan around 1130, stopping to take in the views and a quick lunch break! After lunch, we set off to obtain our highest objective of the day - Bidean nam Bian (1150m)

We descended to the bealach between Stob Coire nan Lochan & Bidean nam Bian, looking ahead at the intimidating ascent we would need to make... Diving straight into it head first, we blasted up the ridge powered on pure buzz! 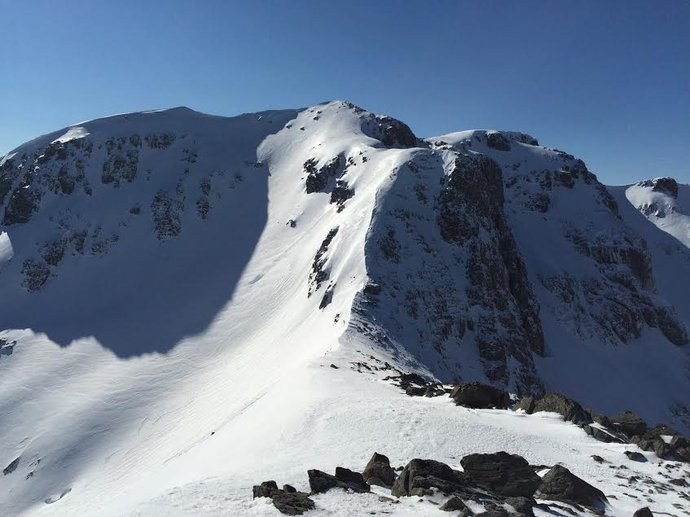 The initial ascent was steep, however it offered excellent purchase in the hard neve... We were all glad when the ridge evened out, our calves on fire we slowly made the final push to the summit of Bidean At this point I was half expecting to wake up, I thought I was dreaming...

It was just too good to be true!

We decided to continue, descending to Bealach Dearg followed by an ascent of Stob Coire Sgreamhach. Our original plan was to descent to the Lost Valley via Bealach Dearg's incredibly steep head wall!

However, it was becoming increasingly apparent that this would not be possible... A massive over hanging cornice blocked access! It would be to dangerous to even attempt descending this way!

... Plan B was quickly put into effect! In order to make a relatively safe descent, we would first need to ascent Stob Coire Sgreamhach... We would then make our descent via Sgreamhach NE Ridge, taking in Beinn Fhada at 952m

The ridge from Beinn Fhada onward isn't difficult, however a very steep 170m descent would be required... 55 degree hard neve slopes allowed us to make rapid progress... followed by a 70m grade 1 scramble to reach the safety of the ridge...

This sections of the route would now be referred to as "Tiggers Wall" due to our team dog making an incredible unassisted descent! The dog worlds answer to Ueli Steck! 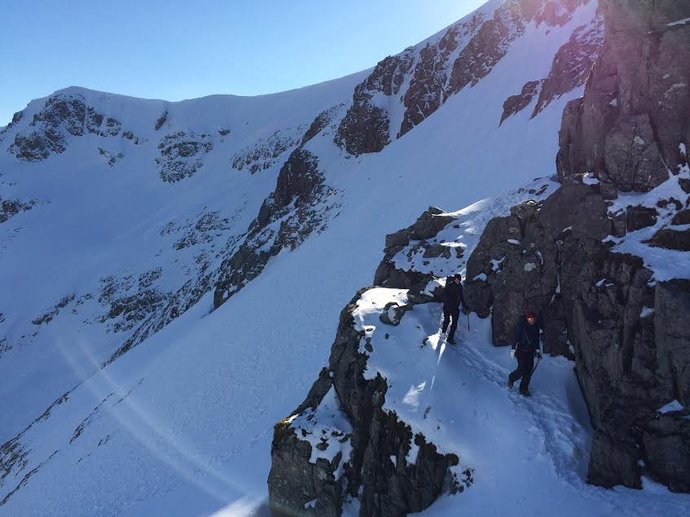 Home ward bound, we made steady progress descending to the Lost Valley... The route was steep but direct! We soon took our crampons off... the end was in sight! Picking up the Lost Valley trail we made our way back to the cars laughing about how much fun we had! In conclusion, I experience the best day I have ever had in the Scottish mountains!

The views were out of this world, the weather was spectacular and the company was unmatchable!

I hope to see many more days like this, however for now, this will stay in my memories for a very very long time!

Harrison
Click to mark this as a great report. Register or Login free to be able to rate and comment on reports (as well as access 1:25000 mapping).