4 from the North, and a bridge gamble


Big_day_via_Glen_Orrin.gpx Open full screen  NB: Walkhighlands is not responsible for the accuracy of gpx files in users posts

Something has always stuck in my throat about the Strathfarrar access arrangements. Its not that I think the estate are doing anything wrong, on the contrary its great that there is public vehicular access at all. Its just that none of:- arriving at a certain time, hoping there aren't too many cars that day, planning my day around getting back through the gate in time, etc. match my ideal of a relaxed day in the hills. Because of this I started looking at options for climbing the 4 Strathfarrar Munros from the North via Glen Orrin. It would involve a bit more effort, but also take me further off the beaten track into an area I had never seen. There wasn't any material online showing all 4 Munros done from the North, so I am posting this in case others fancy a similar route.

The route starts and ends with a climb/descent through the pass east of Beinn Mheadhoin. This pass connects Strathconon to Glen Orrin. The climb from Inverchoran to the top of the pass is 270m, while the descent into Glen Orrin is only 130m, so at least its significantly easier on the way out that on the way in!

Initially during the planning, I thought that I would need to use the footbridge just SE of Creag a' Ghastail to cross the River Orrin on both the way out and back. But I also wanted to start my circuit by climbing up the glen south of Corrysleuch ruins to reach Sgurr na Ruaidhe without any double ascents. While pondering this on Google Earth's aerial view I saw what looked like a bridge at Corrysleuch. It wasn't on the OS maps. I went on OS Maps online - it wasn't on the detailed maps but appeared on the base map. I decided to gamble on a bridge being there - with the back up plan being a trouser-less wade if the river was up. This made a significant cut to the route, but made me slightly nervous to see what was there!

I left my home in Aberdeenshire around 0600 and started around 0900. I chose a Tuesday, as Strathfarrar access isn't open that day and I wanted the place to myself. The route from the North starts at Inverchoran, and I parked my car a couple of hundred metres East of the farm entrance in a big area of hard standing. I had my lightweight camping kit with me, as its a reasonably long day and I thought a camp in Glen Orrin on the way out might be preferable to (even more) knackered legs.

The climb from Inverchoran is initially quite steep, but once over the pass you get a stunning view of Glen Orrin. It is a perfect highland glen, surrounded by peaks and with a flat area of pasture beside a beautiful river. There is no habitation, although from the scale of the ruins at Corrysleuch I guess the glen once supported several families. There are an endless choice of fantastic camp spots. 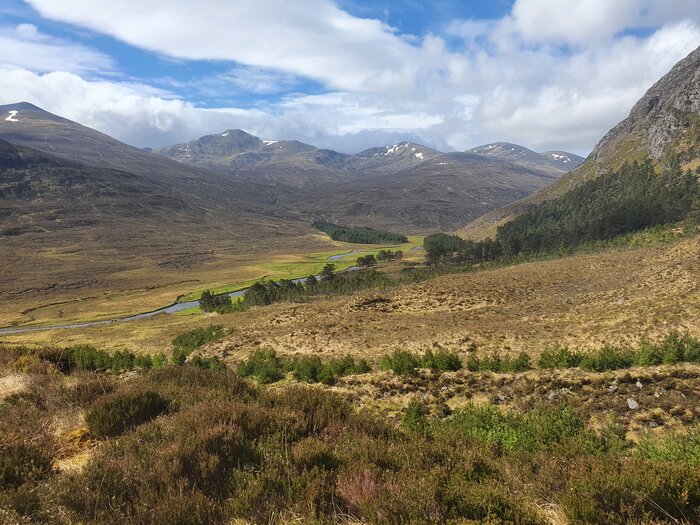 I turned East once over the pass and followed an estate path just above the flatter meadow. I couldn't see a bridge....although the river didn't look too high so wading was certainly an option 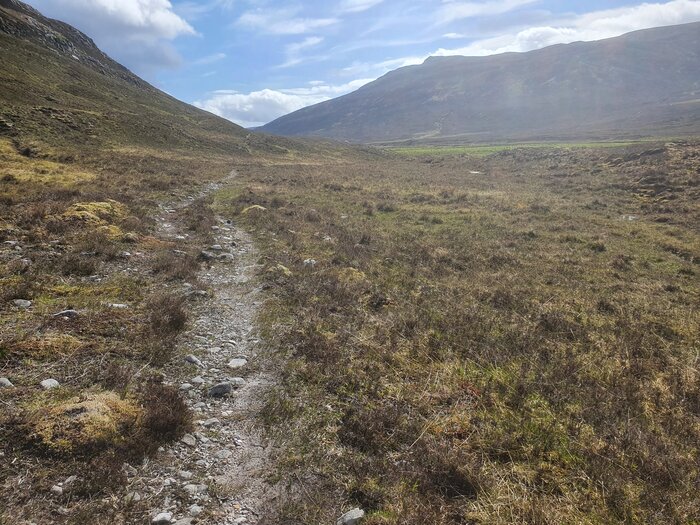 and then I caught a glimpse at the narrows adjacent to the Corrysleuch narrows.... A fantastic new-ish footbridge at NH 29025 47201 ! Worry over, and a good one for WH people to know about for various routes in Glen Orrin. The ruins at Corrysleuch looking east Now I started the ascent proper, climbing up the glen directly south of Corrysleuch, alongside the Allt Coire na Sleaghaich. There is a rough path through the heather, which makes it a pleasant walk up this very scenic glen. The burn is bigger than I expected and it's a beautiful place I was trying to gauge the best spot to climb to my left out of the glen and onto the ridge. I did this at approx. NH 28835 44160 where there was a good stream I could follow up. This gave me the chance to fill up with water quite close to the top of the ridge. After 3 hours walking, I reached the summit of Sgùrr na Ruaidhe and could see most of the ridge ahead I then had a great walk along the ridge, ticking off Càrn nan Gobhar, Sgùrr a' Choire Ghlais, and Sgùrr Fhuar-thuill. I was feeling the weight of my camping gear on the ascents, but enjoying the views between rain showers. I didn't take any photos, but this section was as per the WH route.

My route departed from the 'normal one' again at the top of Sgùrr Fhuar-thuill. I headed just west of North down the shoulder for a rapid descent to Loch an Fhuar-thuill Mhoir. The descent is steep, but not too difficult or dangerous. It is mossy scree underfoot. I wouldn't choose to ascend this way, but plenty of deer had been up and down it!

I had originally thought of camping at Loch an Fhuar-thuill Mhoir, and it would indeed be a perfect camp spot. Nice flat areas beneath the towering eastern face of Sgùrr Fhuar-thuill However, it was now only 1630 and I felt fine. I also knew that rain was to come that evening and decided to try and finish up and get home that night.

I headed NE from Loch an Fhuar-thuill Mhoir, staying high in the bowl to avoid gullies I had seen from above. Skirting around Carn an Fhiodha and dropping though the gully east of Carn nam Fiacal. I could see a good track on the Northern side of the River Orrin and so decided to wade across it near the end of Am Fiar-Loch rather than detour via the footbridge.

The trudge on the landrover track over the pass on tired legs was a challenge, but by 1900 I was back at the car. I did not see a single person all day.

A fantastic day on a route I would recommend as an alternative to the normal Strathfarrar one. Spending time in Glen Orrin is itself a bit special, and I will be back for a camp one day.
Click to mark this as a great report. Register or Login free to be able to rate and comment on reports (as well as access 1:25000 mapping).