This post is not published on the Walkhighlands forum
Munros: An Gearanach, Binnein Beag, Binnein Mòr, Stob Coire a' Chàirn
Date walked: 30/06/2014
Views: 836

This post is not published on the Walkhighlands forum
Munros: Stob Choire Claurigh, Stob Coire an Laoigh
Date walked: 18/06/2014
Views: 672

This post is not published on the Walkhighlands forum
Grahams: Hartaval
Date walked: 07/06/2014
Views: 693

Scree above the Slig

This post is not published on the Walkhighlands forum
Grahams: The Storr
Date walked: 26/05/2014
Views: 601

Having been watching the hill forecasts keenly for weeks we finally decided to head out yesterday for our first proper hill day this year. We had thought of a couple of Munros in Glen Affric that I still have to do, but the forecast looked better further East. The big problem with going further East......there's a distinct lack of big hills

We didn't fancy Ben Wyvis again, as stunning as it looked first thing as the sunrise lit the snow clad slopes with a rosy hue. We settled on a Graham we've had our eye on for a while, Meall Mor. It's East of Ben Wyvis so we thought we should stay in sunshine for a good part of the day. We checked the hill reports on WH and decided to head up through the Novar Windfarm. Although a good chunk of the day would be spent amongst wind turbines, we realised that as we were setting out later than usual we would be descending as it got dark, and I felt happier on proper tracks if we had to have a headtorch descent.

The weather was stunning, clear blue skies and no wind for most of the ascent. The views in all directions were amazing, and it was clear that the North and East of the country was definitely getting the best of the sun. We set off along the windfarm track, past a farm and on up to the substation where we turned right. To our left 2 diggers were lifting clumps of earth ready for tree planting on the slopes opposite. The track steepened and we began our first section of ascent. A van had been up the road ahead of us clearing tracks in the snow making the going much easier, but I still felt the strain on my legs. How had I ever thought I'd be up to 2 munros at this time of year

We continued on and up and the mighty windfarms came into view. After about an hour we stopped for a cuppa and some Christmas cake in the sun, resting against the side of one of the huge turbines. Luckily this one wasn't working today so we could enjoy the snack in peace. The views out over Wyvis were already stunning, seeing the side of it which we don't often see. The corries had evidence of avalanche debris and some cornicing already. We soaked in the views and the sun before continuing along the track and through the windfarm. The weather was beautiful and the views stunning and even the wind tubines couldn't dampen my spirits today.

Eventually we got to the end of the windfarm and had to begin to make our own way to our summit, about 2.5km further on. By this time we were pretty high though so there wasn't too much in the way of further ascent. We were getting breathtaking views of the Ben and the hills beyond. The terrain was pretty haggy though, and Derek broke trail through the snow covered bogs, luckily, or maybe skillfully avoiding any deep bog! We made for a large boulder on the hillside, and could see the tracks of an all terrain vehicle heading across the side of the rolling hill ahead leading us towards the fence and the route to the summit.

Once through the worst of the peat hags the terrain was wonderfully flat and springy, covered in vast swathes of mosses and lichens. The air here is so pure and the habitats reflect this. We soon reached the fenceposts which lead right to the trig point. The sun had disappeared behind some high level clouds by this time, but we still had amazing views, down to Loch Glass, close ups of the East of Wyvis, and then up to the far North and into Sutherland. The sun kept coming and going behind clouds, giving off a lemony glow, but we didn't get the stunning sunset I had hoped for. As we took the summit photos an icy wind picked up from nowhere and chased us off and back down the hill.

A lovely hill offering unusual views of familiar landscapes. If you don't mind walking through windfarms it's a good route up, with only 5km of the 20km or so being pathless terrain. We headed back down without headtorches as the almost full moon provided enough light to see the windfarm tracks. Making use of the wind turbine Heading through the vast windfarm Peat hags, East of Wyvis beyond 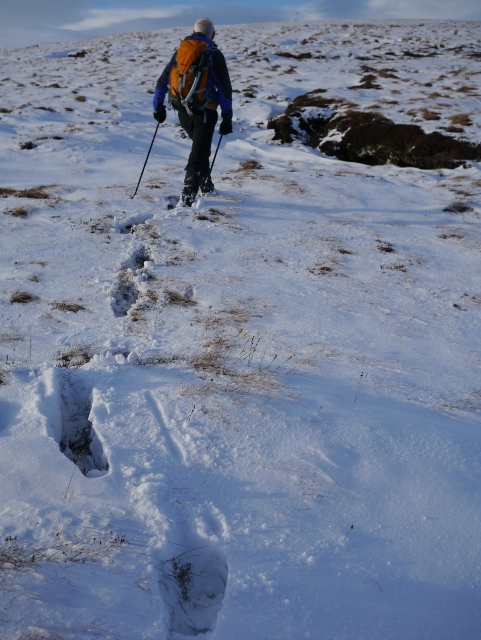 Views down to end of Loch Glass Fence leading to the summit Ben Wyvis from the East View back to summit