Scafell, Slight Side and Done!

With a dodgy left knee and an operation looming which means I'll probably be off my feet let alone a hill for a while I'd been wanting to walk the last two (of my first Wainwright round), Scafell and Slight Side since September last year and with my better half.

The title of the walk should maybe be Slight Side and Scafell and Done as that is the order we did them in, parking Beside Wha House Farm in Eskdale and taking a generally northern linear route from there but never mind. For quite some time I'd planned that the last Wainwright of my first round should be Scafell and really it seemed to be the best way to do the walk as I was left with Slight Side to do as well. I don't normally like linear walks, I much prefer a round and as you can see from the planner we did our best to make sure it was not totally linear with a detour across the south western slopes of Scafell and Slight Side on our way back.

The next thing we'd been waiting for was the right weather conditions which matched a weekend off that we had together, as we only get one every 5 weeks you can see that we have to be quite lucky. At the beginning of last week after a great weekend at the end of March, the forecast seemed to show that Saturday 1st was looking a bit iffy and Sunday 2nd seemed to be the better day, which is exactly how it turned out. I really wanted to have a view when I got to the top, more of that later.

So after a quiet night in Ambleside, don't by the way go and see the film Ghost in the Shell

, it's one of the worst I've seen in ages. We were parked up and ready just before 10am, the sun was blazing and there was hardly a breath of wind, off we went up the path with Hare and Goat Crags to our left and views gradually opening up of Hard Knott and the Roman Fort. Hard Knott and the Roman Fort

After that it became a bit of a slog through some very wet and boggy ground under Bull How and Dawsonground Craggs, past or through Catcove Beck, which to be honest wasn't such a hardship as views like this towards Bowfell were opening up all the time. The water really was pouring off Quagrigg Moss, I'm not sure this picture does it justice it looks quite dry, but we could now see what lay ahead. Slight Side with Scafell looming behind

Looking back you can maybe see how wet the ground was and how good a day it was. The slog up the south western side of Slight Side is quite a fearsome one, but worth it when it gives you views like this. 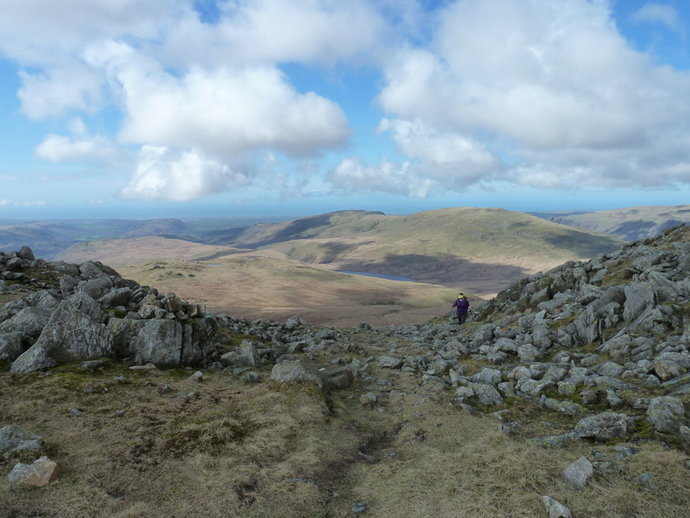 We'd made it to the top of Slight Side and up to this point there had hardly been a cloud around Scafell, but there were a few looming Scafell from Slight Side Esk Pike, Bowfell and Crinkle Crags from Slight Side The Coniston Fells from Slight Side

Well 213 down and 1 left to go to complete my first round. I'd really only started walking again midway through 2013 following a bit of a change in my life, I'd done the odd bit when younger and had access to the Highlands of Scotland as a child with family in Muir of Ord near Inverness and Shieldaig which is a little village to the West of the Torridon giants so I would spend countless hours in the wilds with my cousins, but in all honesty had become a bit of a Townie in my adult years

Like I say a change in my circumstances made me "rediscover" the great outdoors and what a place we in Britain have at our fingertips, I include England and Scotland as I have a foot in both camps being half Scottish, half Geordie. I am sure Wales and Ireland offer the same, I'm yet to sample their delights though. Can there be anything better than having completed a hard slog up a hill, drinking in the views? I don't think so. Anyway back to the walk the cloudless day we'd enjoyed up to that point was having second thoughts, whilst it was still fine to the east of Long Green.. ..there were a few clouds creeping over Scafell Fingers crossed for the hill gods

So it was with great aplomb and after a long drawn out ceremony (my better half said don't touch it till the camera is ready) I summited my 214th Wainwright. Me on top of Scafell We stayed around at the top for a while speaking to a chap from Dundee and a couple from down South looking over to Scafell Pike and the dozens on its summit... was I glad I had chose Scafell for my final Wainwright, heck yes

I wasn't sure what I'd feel when I got to the top, euphoria, relief, great sense of achievement or what. In all honesty as I am sitting here now the next day writing this I still cannot put my finger on it. I don't have any great desire to summit all the hills the country has to offer, for a start when I'm next able to is anyone's guess as I go under the knife again in just over a weeks time. I know I'll be back in the lakes as my better half has a good few to go and I'm planning to start and up my Munro count, not to mention the Welsh and Irish hills. I think I'll say this, yes I reached a milestone yesterday (one that I am proud of especially since for around 20 months I've had issues with my left knee), was it the destination, no simply part of the wonderful journey open to us all in our great outdoors.

Oh and just to show you the weather gods have a sense of irony, no sooner were we 15 minutes off the summit, did the clouds clear totally and leave for the day !