A Highland walk - some of the EHW


our_route.gpx Open full screen  NB: Walkhighlands is not responsible for the accuracy of gpx files in users posts
After several false starts, I finally got round to doing some walking in Scotland. I had fancied doing a long distance walk, initially the WHW, but I was put off by some reports suggesting it is too popular – a victim of its own success, as it were. I considered the Upland way, but I wasn’t convinced – I finally settled on the EHW. Except reports suggest it is too repetitive with too much forest track walking. I read a report by Whiteburn (East Highland Wild Way) which sounded interesting, as it replaced part of the EHW route with something a little wilder. So that was it, I booked a train ticket that would get me to Rannoch (just sounds evocative) in the afternoon and discovered I was the only one getting off. Changed my top on the platform and rearranged some gear (2 packs due to flying into Glasgow, 1 being a small daysack for camera etc) before setting off down the road. I headed East along the B846 before I could swing NW on a track at Loch Eigheach. I pitched the tent at Corrour Old Lodge and just enjoyed the peace and tranquillity for the night. The open space and solitude was just wanted I was looking for. Morning dawned and I enjoyed breakfast just gazing around the scenery before striking and continuing on toward Loch Ossian. I stopped off for a brew at some small rapids on the Uisge Labhair before continuing up the valley towards the Bealach Dubh and the wreckage of the Wellington bomber. Although the path up the valley was boggy, it wasn’t particularly difficult, and the sense of remoteness felt greater the further up the valley I went. I was in a world of my own when someone suddenly appeared not far from me, but he was heading in the opposite direction after bagging a few tops. 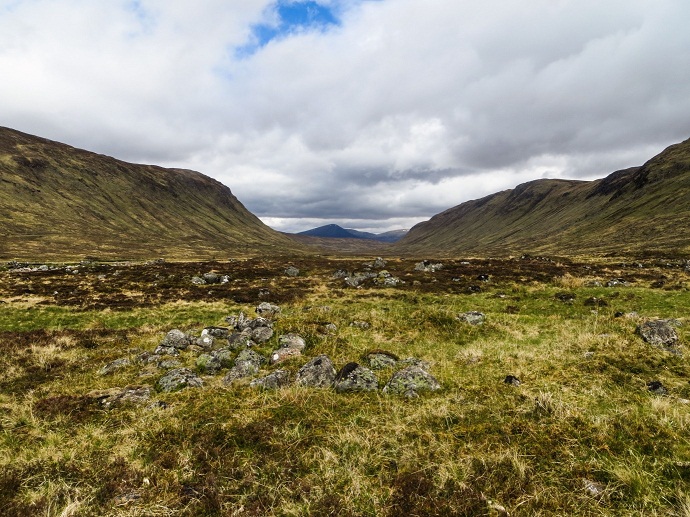 Dropping down the other side toward Culra was pleasant walking, but closer to the bothy it started to feel like Piccadilly Circus, there were so many people around. After the previous walking, this wasn’t what I was expecting, but then I realised it was Saturday, and everyone would be out and about. 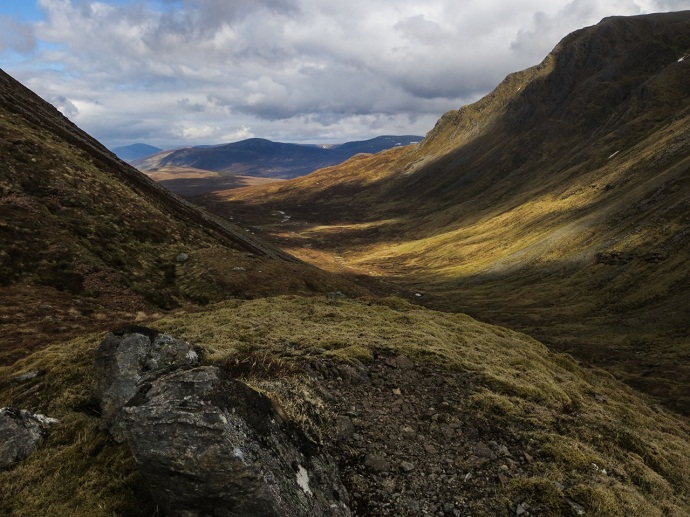 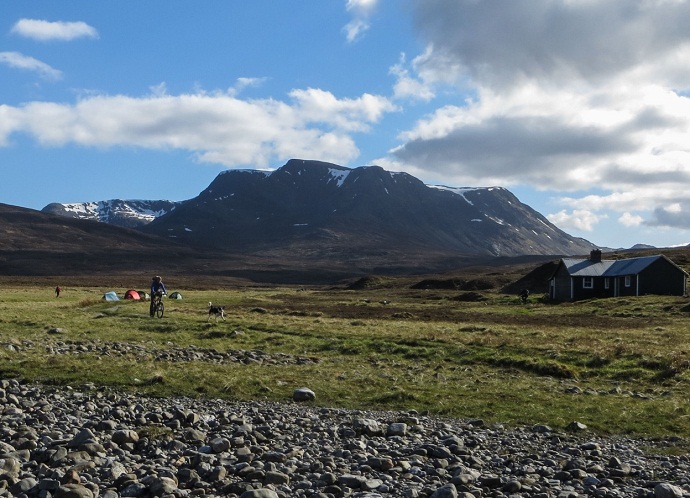 I camped on the side of Loch Pattack for the night. Next day saw me follow the river down to the Falls of Pattack (stopping off for a swim in the river on the way), and thence on to meet up with the EHW. 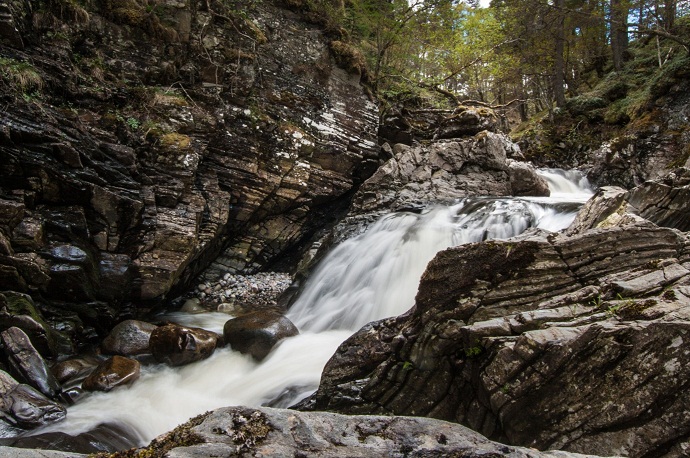 Climbing up through Black Wood, I took the detour to see Dun da Lahm fort. 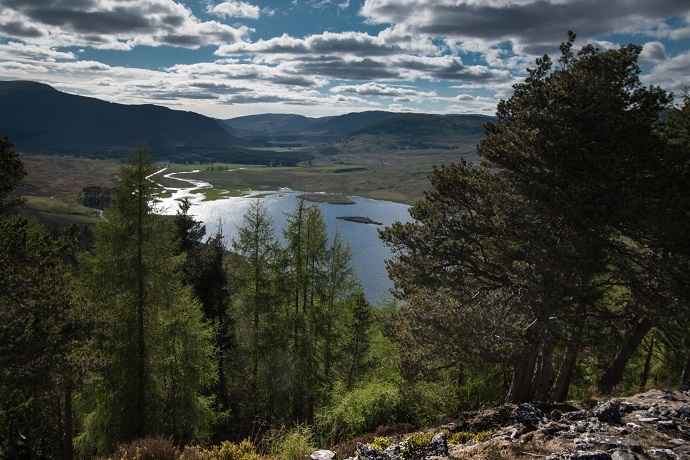 Although, I was planning on camping on the North side of the Spey for the night, it was not to be, as everywhere seemed to be fenced off and have sheep installed. I reasoned I could get b+b in Laggan, but it had a full notice outside, and I didn’t see any alternatives. I kept going, trying the hotel on the A86 – it, too, was full. It was getting late as I climbed up the hill toward Strath an Eilich, but I got pitched at the site of an old croft and got stuck into a late supper. Despite having to walk later than intended, it was nice to be camping, rather than in a room, but a couple of beers would have been more than welcome!
I woke to a lovely morning and as I lay there having a brew, I was really pleased to have spent the night outdoors instead of in a room somewhere. 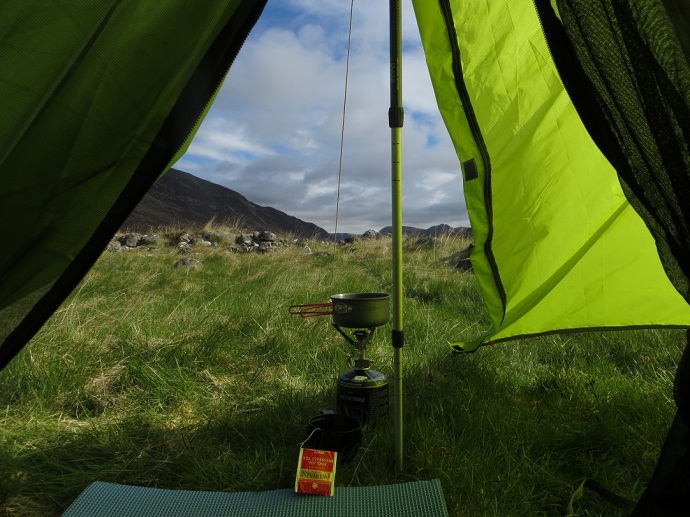 As I walked through Strath an Eilich towards Dalnashallag bothy at the head of Glen Banchor, I passed a couple who had been out camping in Glen Banchor for a few days, and were heading back to their car. The peace was utterly shattered as a couple of jets roared down the valley, but they were impressive to watch, even if I was half an hour too late with the camera! After crossing the river, the EHW book says ‘head for a gate …’, but doesn’t say pass through it. So, on reaching said gate, I just followed the fence and then the riverbank. This was great until I came to a partly collapsed fence that met up with the river, and was forced to clamber somewhat clumsily over it – to the amusement, I suspect, of 3 ladies on horseback who were watching. They asked if it was possible to ride all the way up the Glen. I told them about the gate that I had omitted, suggesting that it should be possible for them to reach it, so they set off in that direction. I continued on toward Newtonmore, seeing a few deer on the way. I opted to spend the night at Newtonmore Hostel (£17) with dinner in the Glen Hotel (good food and beer and reasonably priced). Breakfast was down the road at Newtonmore Grill (again, excellent value). Having refuelled myself, I set off for Loch Gynack via the Wildcat trail – enjoyable walking. The path by the golf course, listed as boggy in the book, has benefitted from a lot of work. The Mill Trail brought me to the Duke of Gordon hotel – lovely pint and a thoroughly enjoyable sandwich. Next up was the short walk down to Ruthven barracks – an impressively forlorn looking structure. Picking up the Badenoch way with views down to the Insh marshes gave some lovely views, and the curlews accompanied with their soundtrack again. Loch Insh looked delightful, and I thought to stay overnight at the watersports centre, but with a party of school kids, they were not accepting bookings other than for a chalet – minimum 3 nights. I walked into Kincraig, but the Ossian hotel was full, the Suie is no longer a hotel (Pub and prebooked Group accommodation only) and the Christian centre was all closed up. However, when talking to the landlord (Mike) at the Suie, he offered me to pitch on the pub garden which has an outside tap – had to think about that one for a nanosecond, or two, before dropping the rucksack and ordering the first pint. A few (exceedingly good) beers and I tottered out to the garden to build my house for the night – what a great spot, although a little noisy in the morning with traffic.
I took the opportunity to re-organise my pack on a picnic table before setting out for Feshiebridge via the sculpture park. I had to laugh at a little fieldmouse that kept sticking his nose out to see if the coast was clear, but on spying me, he disappeared into hiding again. I think he must have been very glad to see me pick up the pack and head off. The day included a fair bit of forest walking, although that included some lovely old areas, before arriving at Loch an Eilean. 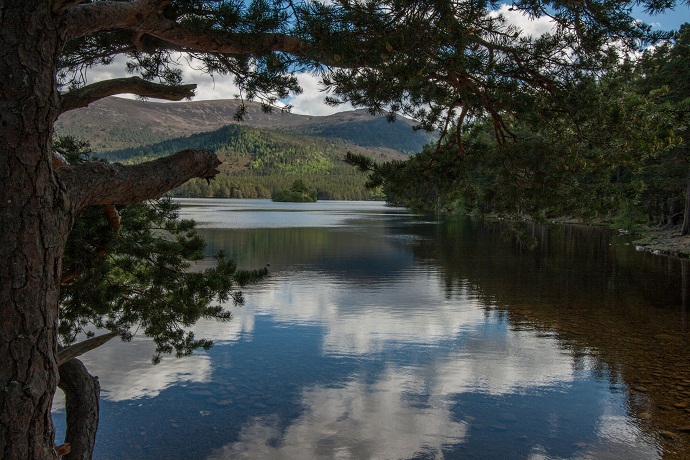 I left the route at the Rothiemurchus estate café and walked to the Rothiemurchus camp site where I spent the next few days camped in the woods at the river side, for a tenner a night. Hugh, a real character, and his wife, who ran the place, were exceedingly helpful, even giving me a lift up to the train station on the last day.
I did originally allow 7 days to stroll to Aviemore from Rannoch, but having done it in 5, I was left with a couple of extra days to fill. Rather than start lugging the pack around again, I settled for day hikes, but also rented a bike for a day and a half. Day trips included the Lhairig Ghru and Loch Einich, but if I had realised how beautiful Loch Einich was, I would have had a night up there!
Having done it, I am glad I took an alternative for the first half – I think it would have been a bit monotonous otherwise. For me, personally, I enjoyed the open spaces at the beginning of the trip, and would like to spend more time around there, camping for a couple of nights at a time and doing day walks, before moving on a bit further