High camp magic in the Mamores

The last two days of my annual leave coincided with a very promising forecast for the hills. After some brief negotiations, the bag was packed early Tuesday morning, and off I drove to Kinlochleven for a high camp in the Mamores. A family commitment on Wednesday meant I wouldn't be doing all 10 munros, but would get four to six done.

After witnessing some of the worst driving and overtaking I have ever seen on the A82, I was thankful to reach Kinlochleven in one piece at noon. I parked at the waterfall car park and headed off towards Sgurr Eilde Mor. I was very pleased to note that there were no midges about as I made my way up through the trees and out onto the open hillside. It was very warm and I was rewarded with some cracking views back down Loch Leven. 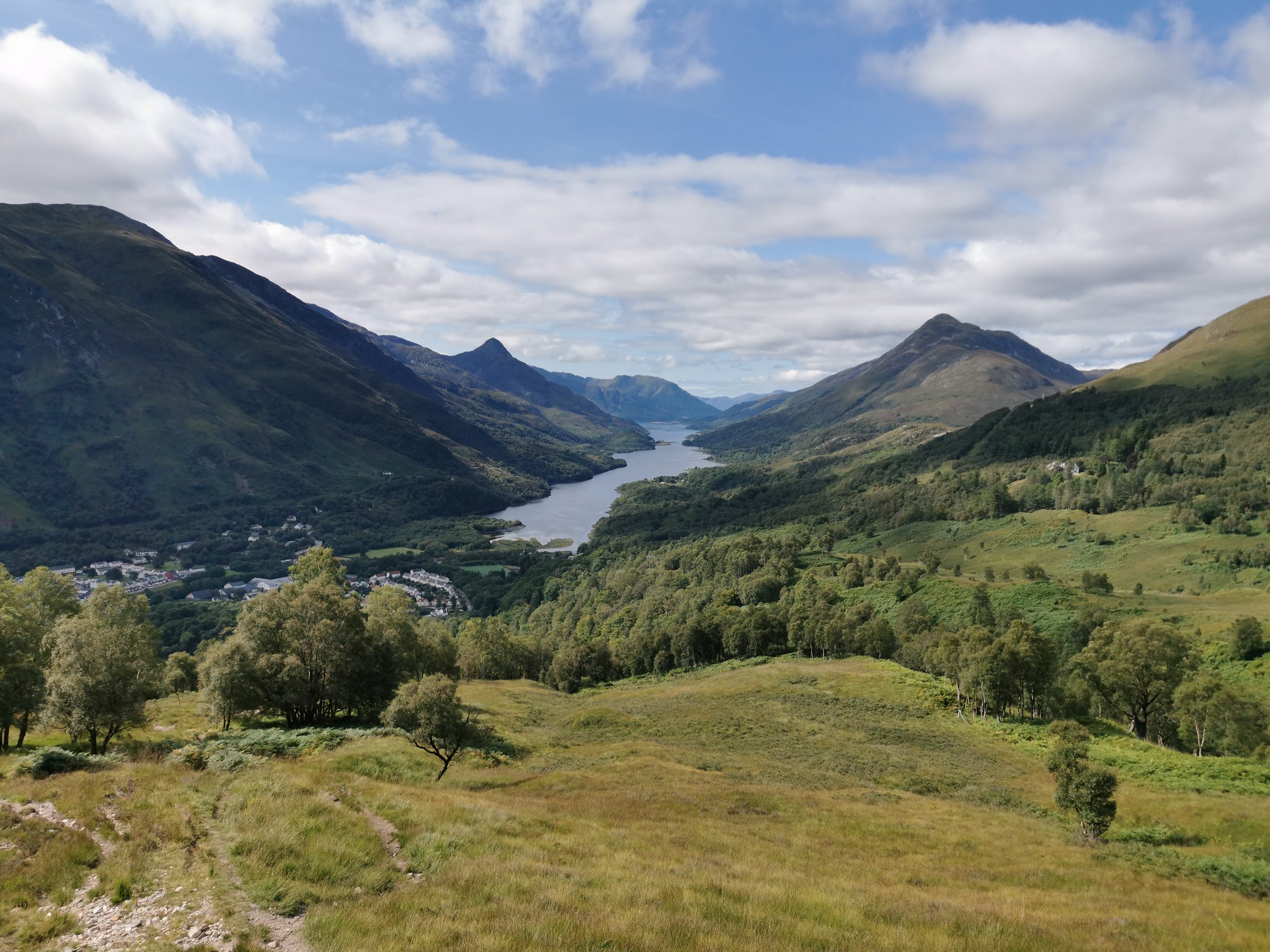 I never really stopped at all until I reached Coire an Lochain below Sgurr Eilde Mor. It's a cracking spot! After a brief stop I dumped my bag near the lochan and started up the path/scree slide to the summit. After 2 hours 15 minutes, I was on the summit of Sgurr Eilde Mor, thankful that I never had to lug my pack up the scree slide! A cracking viewpoint, however it had turned a bit grey. No complaints though since all summits were still clear 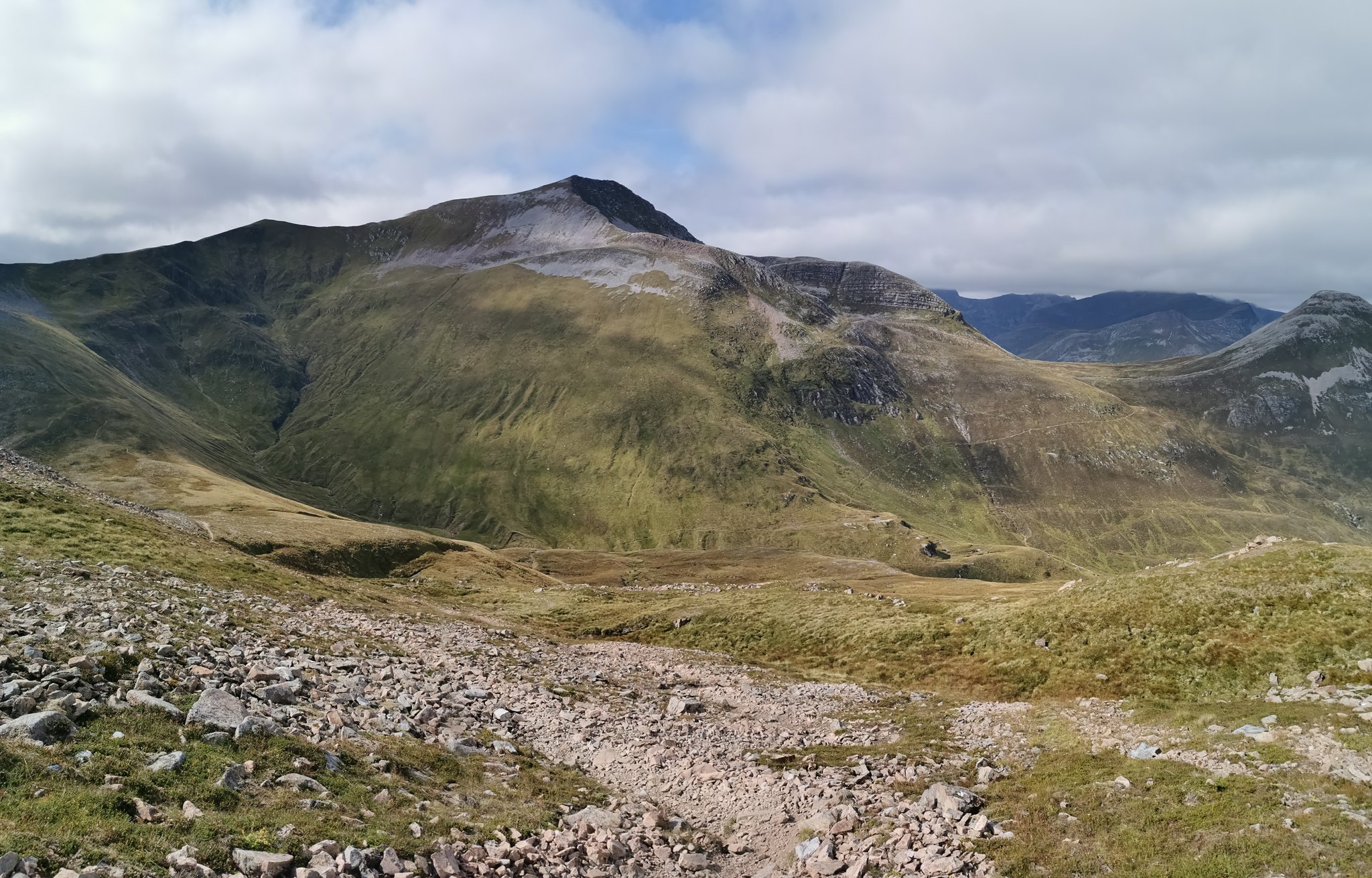 The scree path and Binnein Mor beyond (click to enlarge) 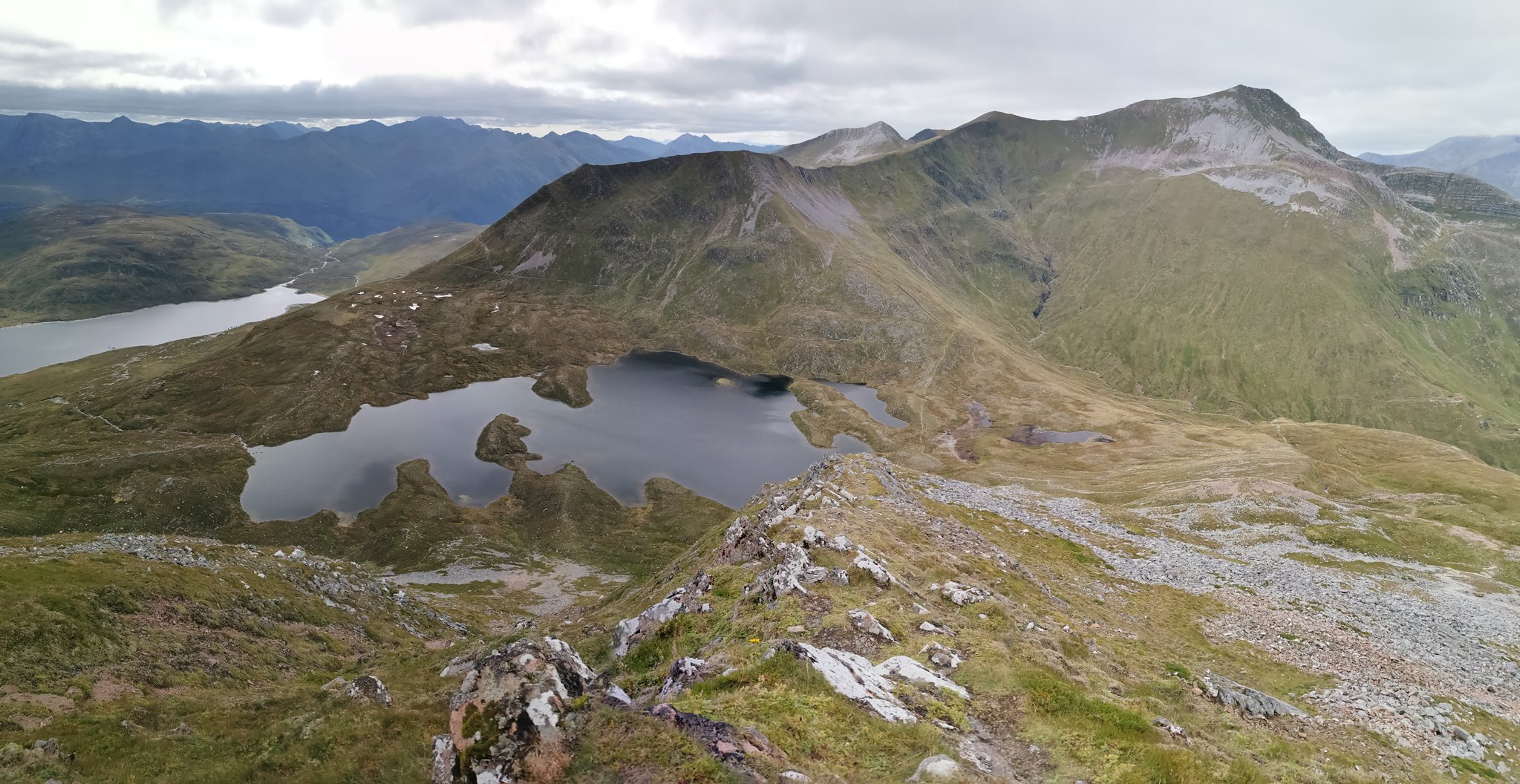 Skiing back to my bag was a giggle, aided by my poles and lack of backpack weight. The path then descends from the lochans to cross Allt Coire a' Bhinnein before climbing back up to the lochan at the foot of Binnein Beag. I topped up my bottles from the exit stream from the lochan and then dumped the bag once more and set off up Binnein Beag. The Mamores are excellent for bag dumping due to the number of 'out and back' summit routes. It makes a big difference with an overnight bag, especially since they are all steep buggers! After a relatively speedy short ascent, I hit the summit at 943m. Another belter of a viewpoint, and I had only seen one person so far. I was surprised how empty the hills were. 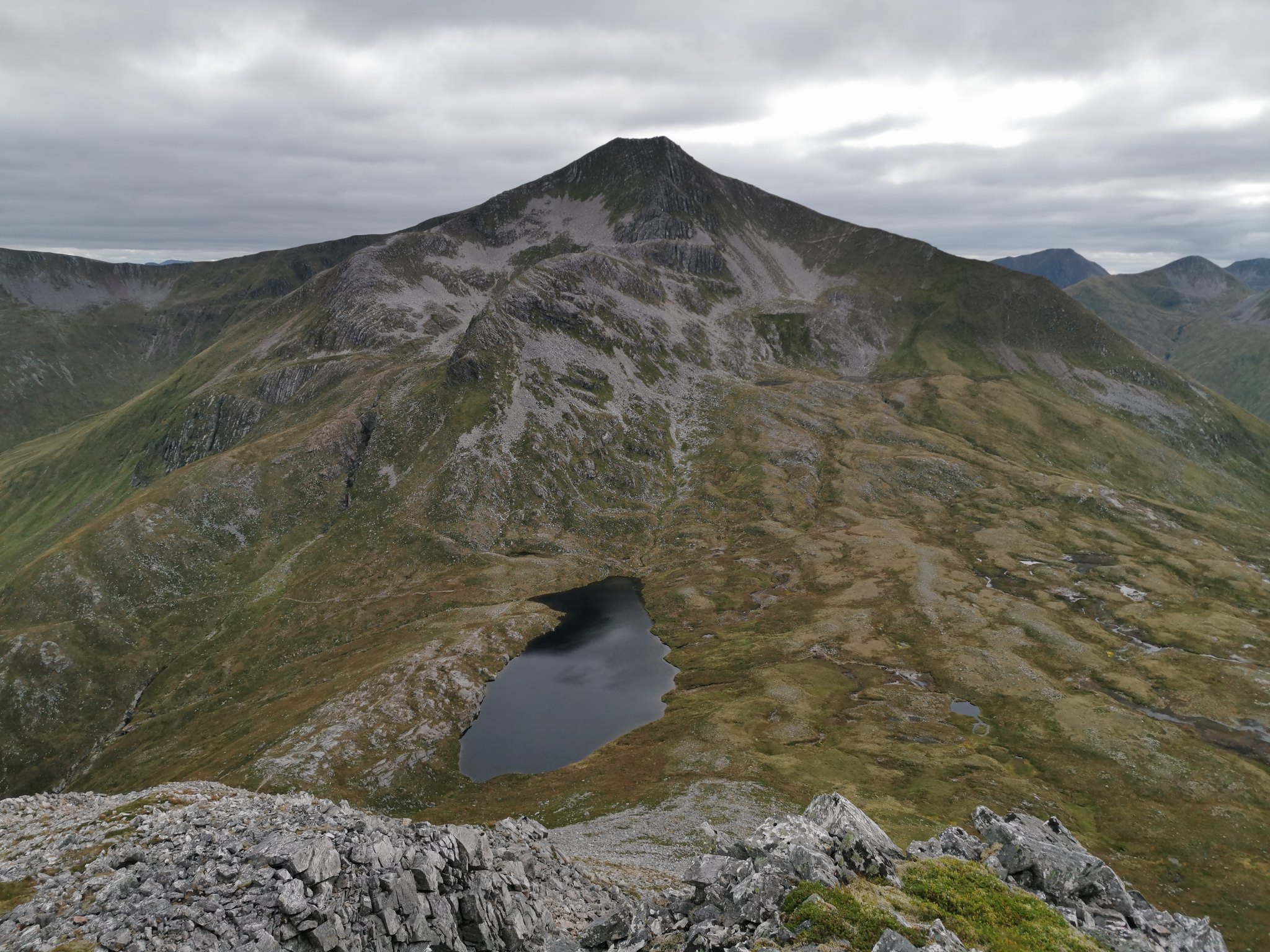 From near the summit of Binnein Beag, looking at the imposing hulk of Binnein Mor (I ascended the right hand ridge) 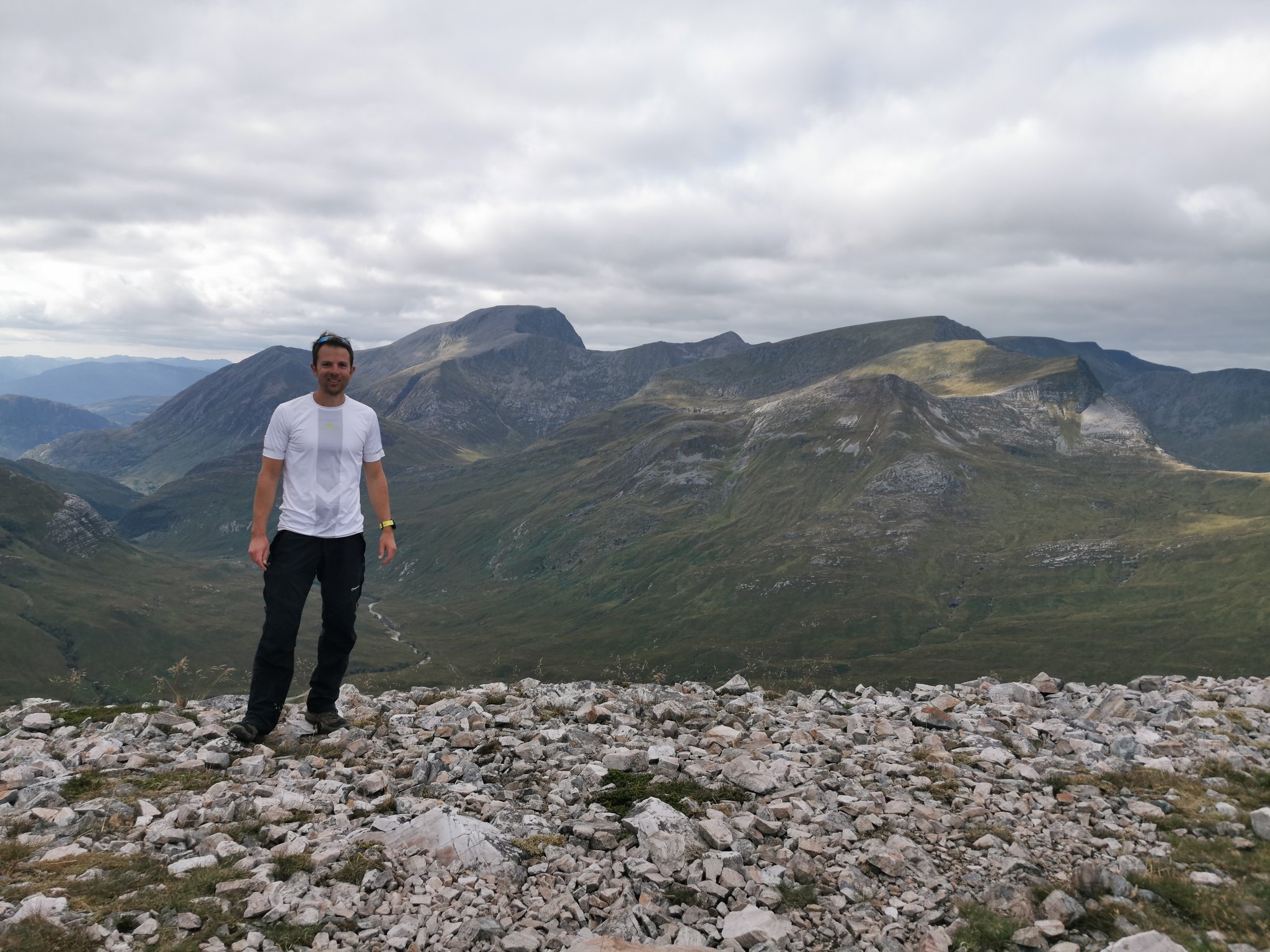 On the summit of Binnein Beag, with Ben Nevis and co in the background 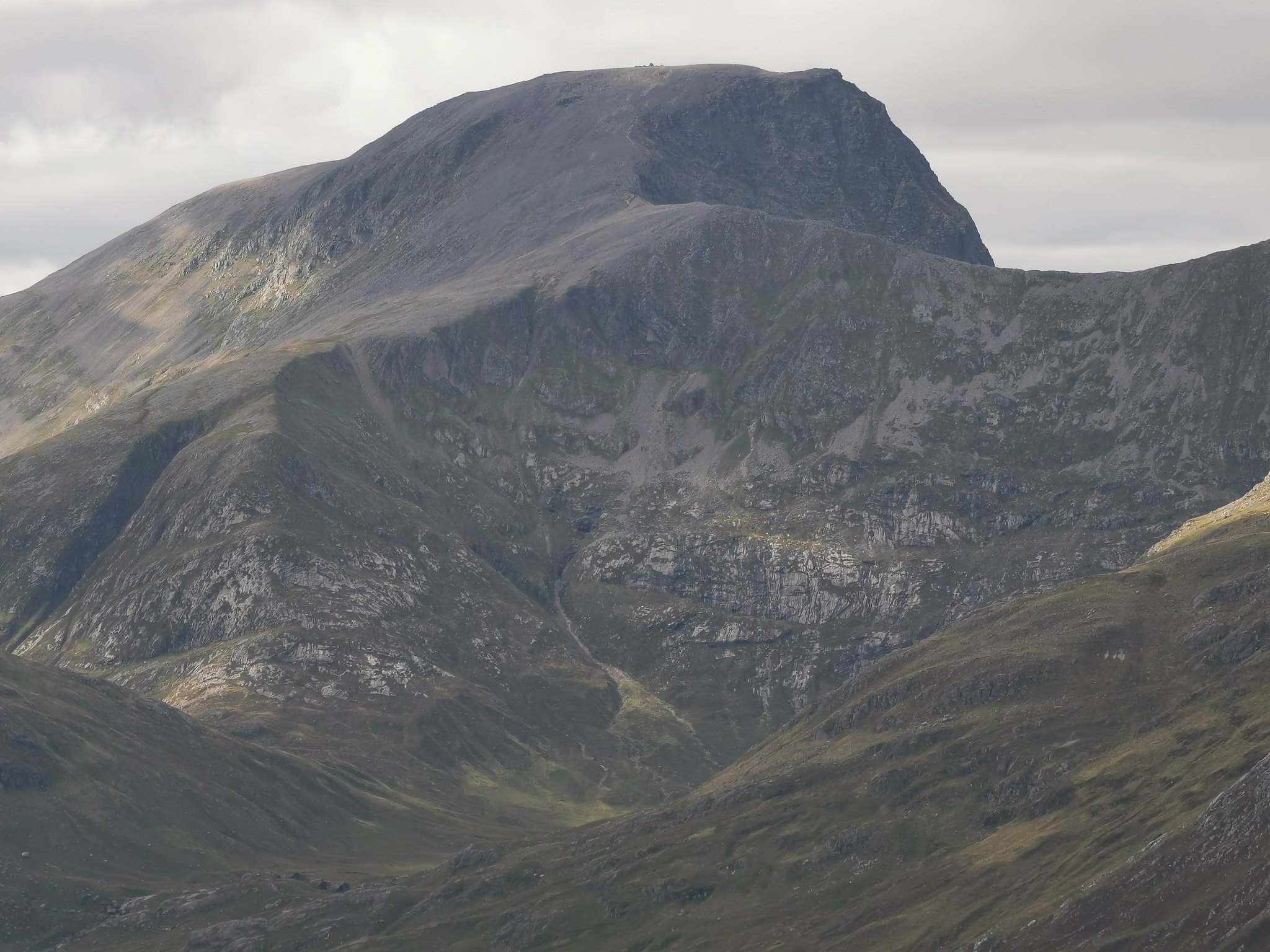 Whilst on the summit I spied a Golden Eagle. Annoyingly I was actually mid-wee when I spotted it so missed my chance to get a photo of it flying overhead

What are the chances....sigh. A quick descend earned me a sandwich at the lochan whilst staring up at the wall that is Binnein Mor, all routes look imposing. I filled up with 3 litres of water as it looked like the last water source before camping high somewhere. I opted for the right hand ridge as you look at it (Gualainn a' Bhinnein Mhoir). This was an absolute bugger to get up with camping gear and 3 tons of water, mega steep rough grassy/stony slopes that had my heart racing. Once I gained the main ridge, it's much easier until near the summit. The views are just epic though in all directions. 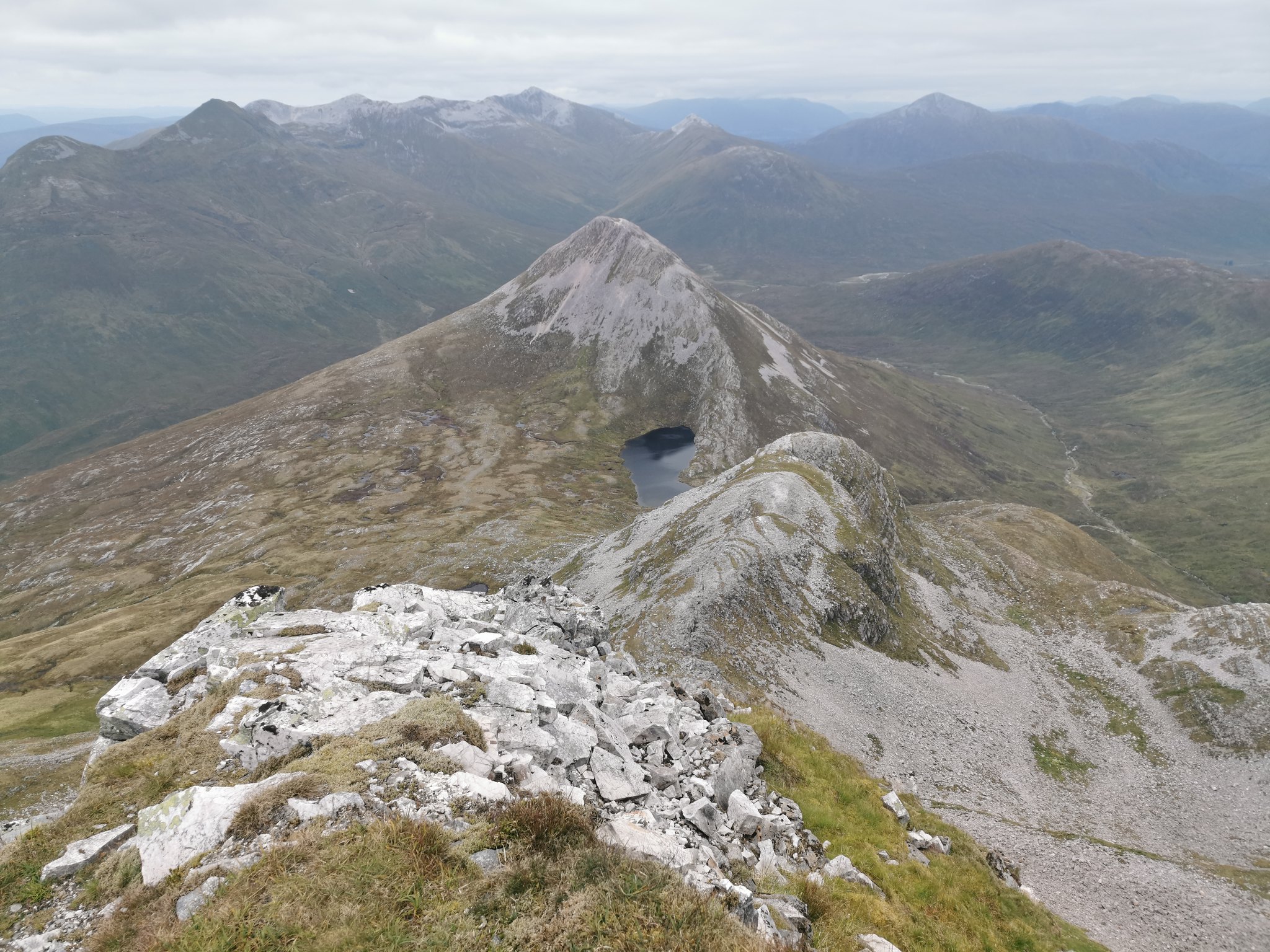 A long way down from the ridge! And how small does Binnein Beag look? 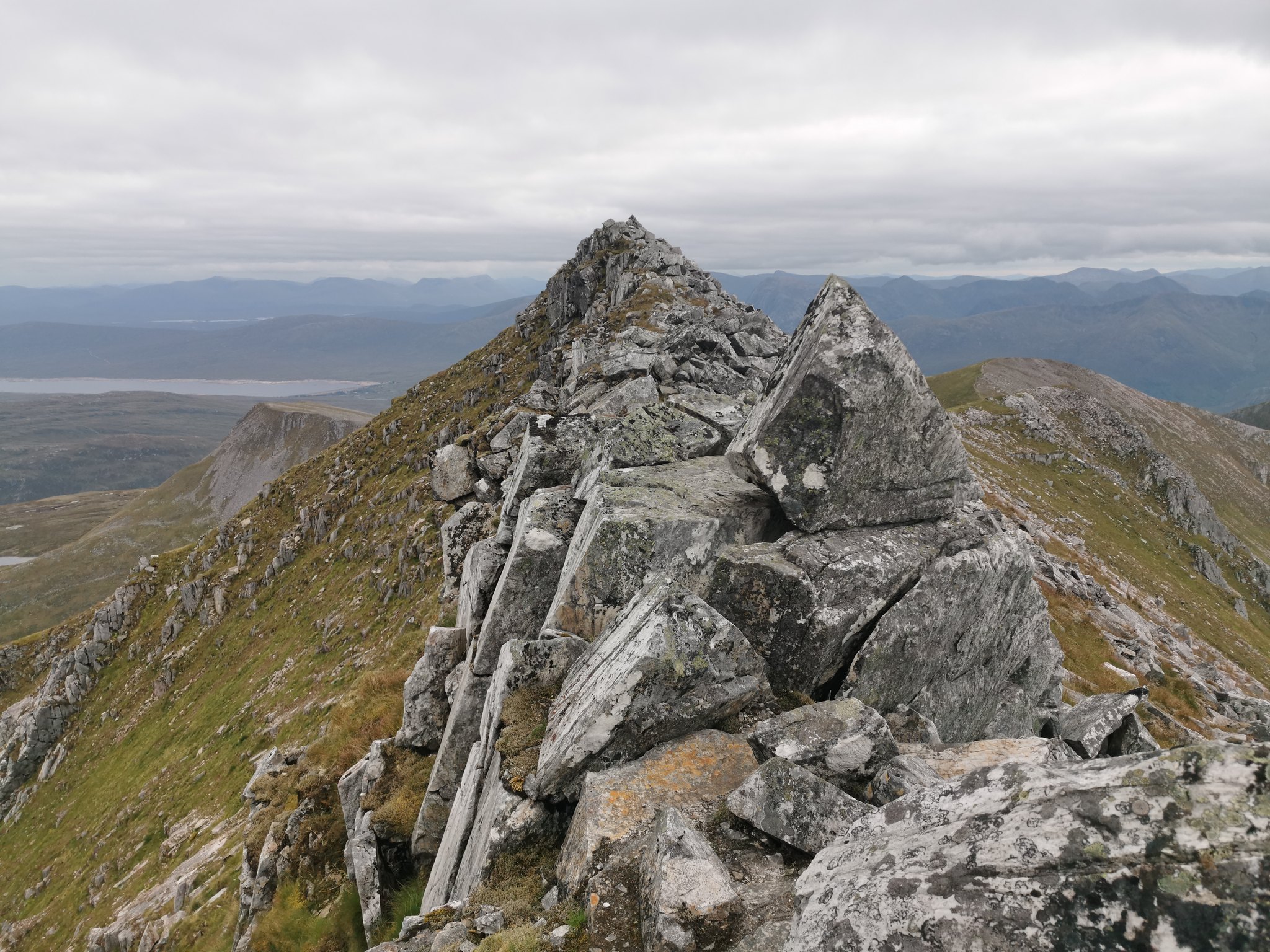 
The summit of Binnein Mor is fantastic, a pretty small summit with steep drops either side. At 1130m it is comfortably the highest summit in the Mamores range. My mind was starting to think about camping spots, particularly since I had been in a scree wonderland for much of the day up high. I spied a grassy top near Na Gruagaichean so pinned my hopes on that working out. The legs were starting to get a wee bit tired and I was looking forward to a relaxing evening by the tent, waiting for sunset. I didn't want to batter on until 10 minutes before sunset and then set up camp in a frenzy. Relaxation was the order of the evening.

The walk from Binnein Mor to Na Gruagaichean was an absolute skoosh compared to the tough ascents of the previous 3 munros and distance between them. It felt like it took about 15 minutes to get there! 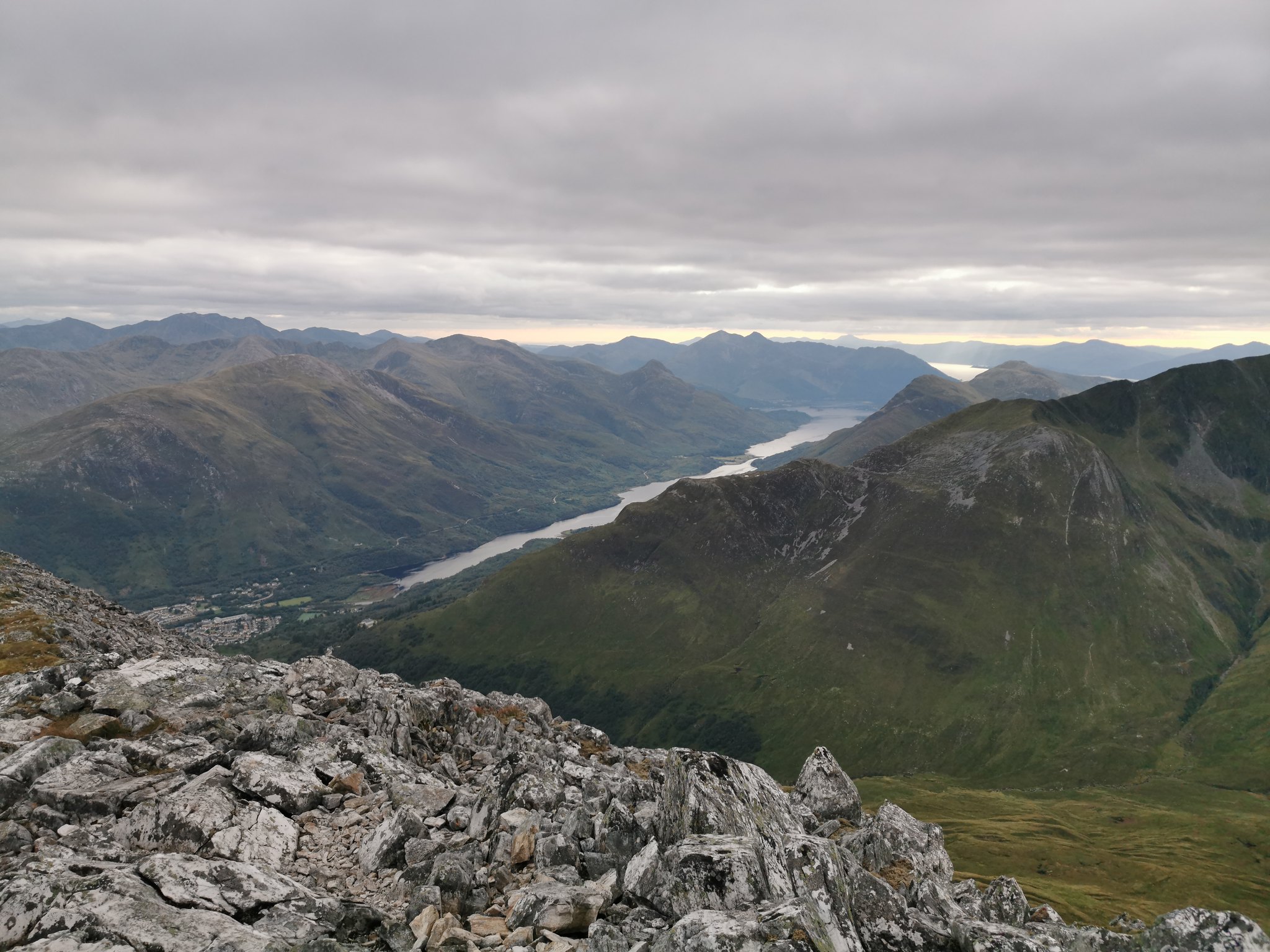 A long way down to Kinlochleven!

From the summit, I could see the grassy top a short distance away, and it looked like it was indeed going to be the spot for the night. Relief! Another steep scree descent and steep up and I was there, job done. The unnamed top is 1036m, and has a flat portion just wide enough for my MSR Access 2. It was about 6.30pm and I wasted no time in getting the tent up, coffee on and dinner lined up. 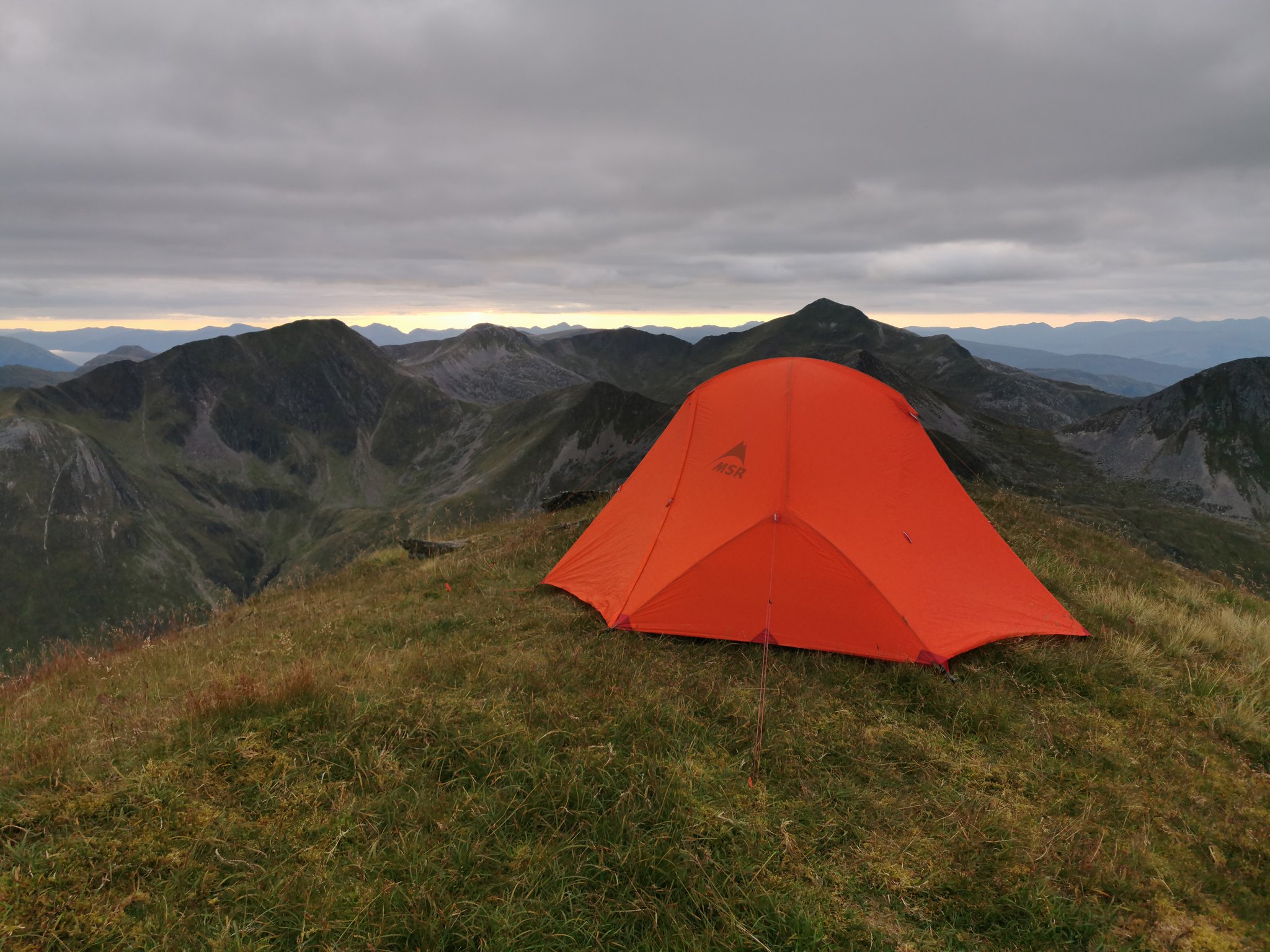 Home for the night - perfect 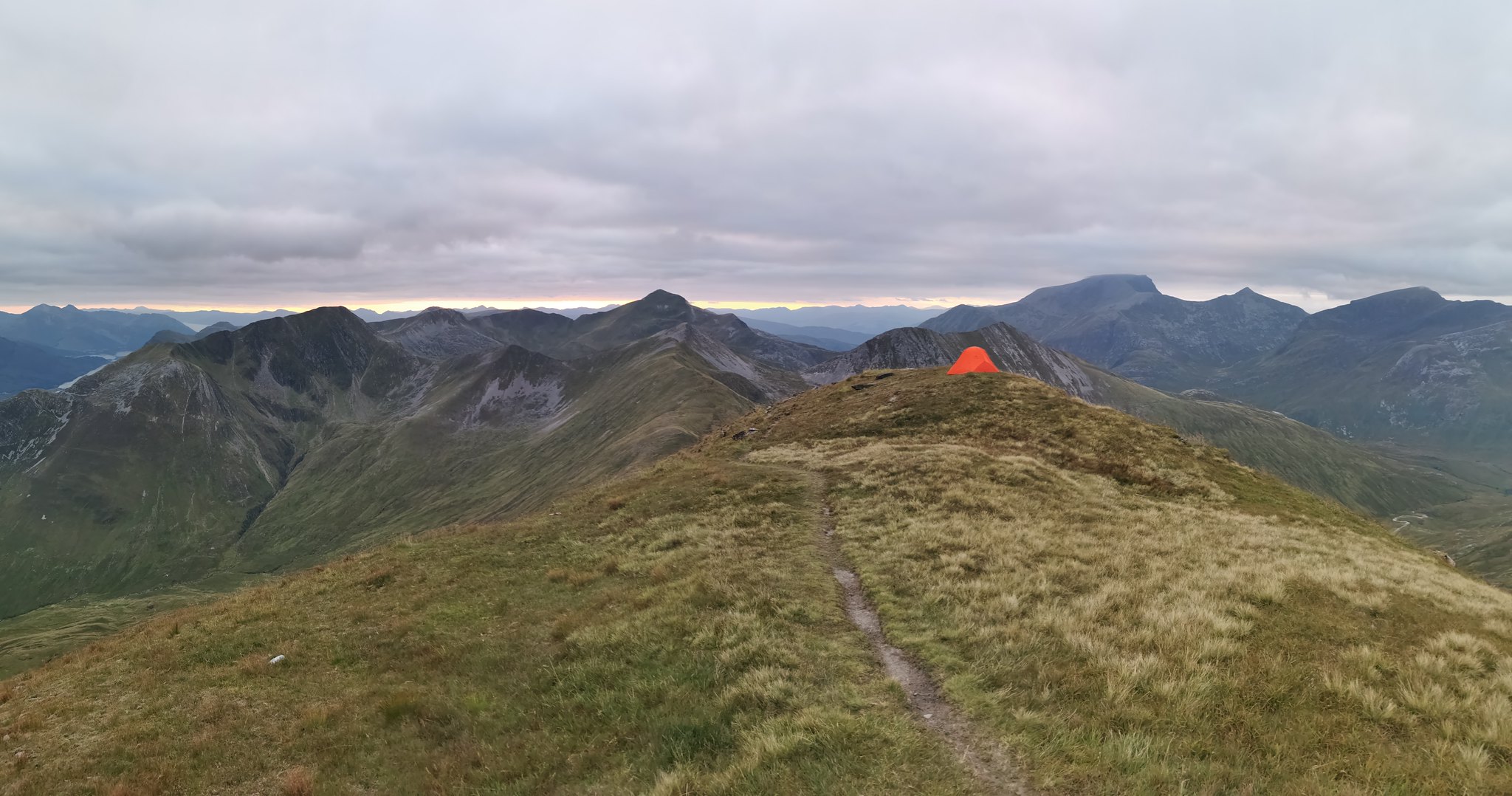 Wider angle view of the hotel views (click to enlarge)

There was almost zero wind up there, and thankfully no midges either. I expected a couple of people to pass by, but I never saw a soul anywhere all evening. I noted there were no clouds to the west, so I had high hopes for sunset, but it never happened. The views were still grand though looking over the rest of the Mamores and way beyond to the west. 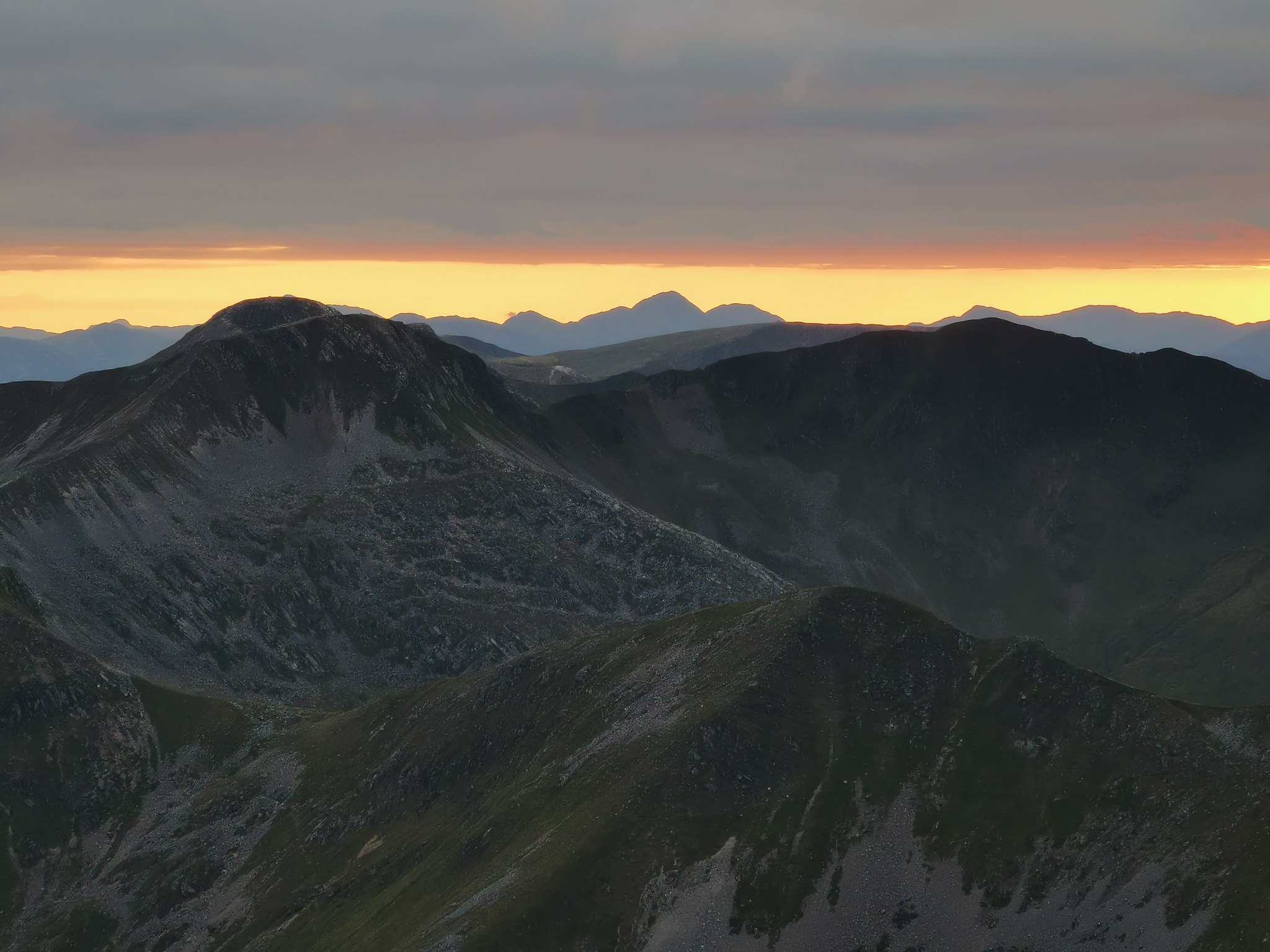 Clouds looked good for lighting up, but not to be. Still a beautiful evening watching the sun set behind Sgurr a'Mhaim 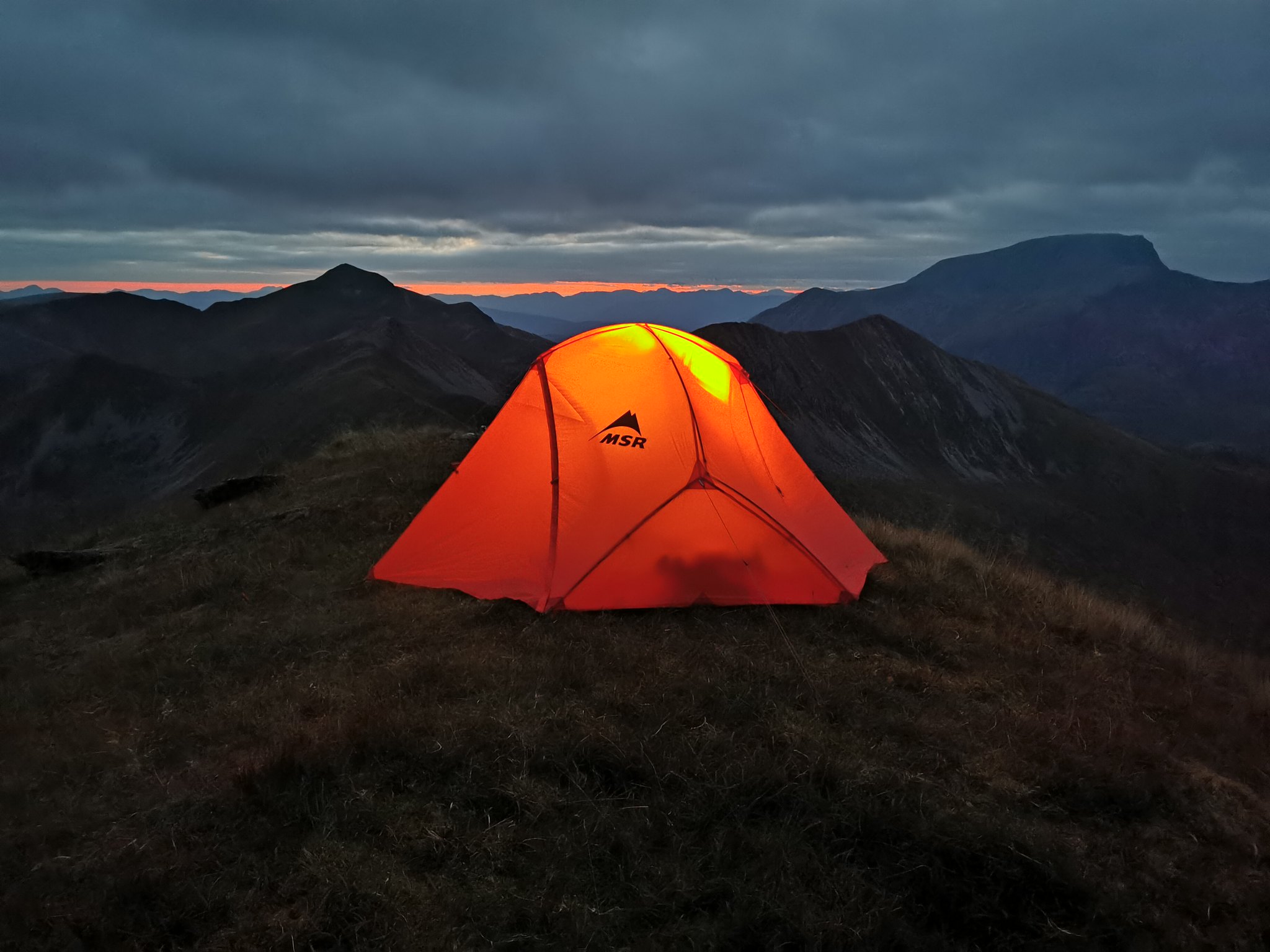 Pre-bed shot before lights out

I set my alarm for 6am and hit the hay. Annoyingly the wind picked up quite a bit for a couple of hours after getting into bed, but I still managed a decent enough sleep. When the alarm went off, there was no wind at all and I was excited to unzip the tent to see what was happening. There wasn't quite an inversion but it was pretty close looking towards the Grey Corries. The coffee was jacked up immediately.....and a pot noodle

A bit interesting for breakfast but hot food and calories are always welcome. 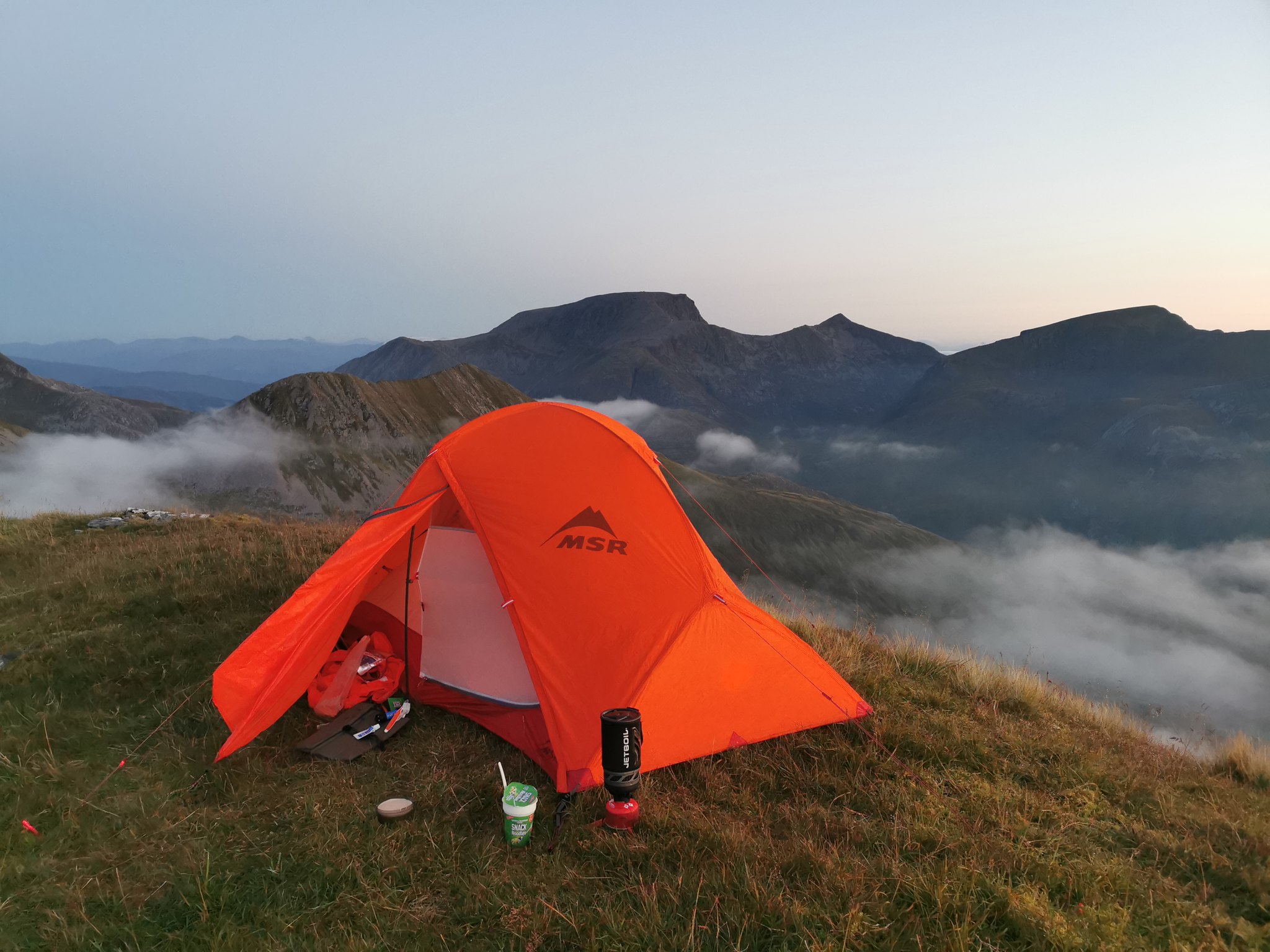 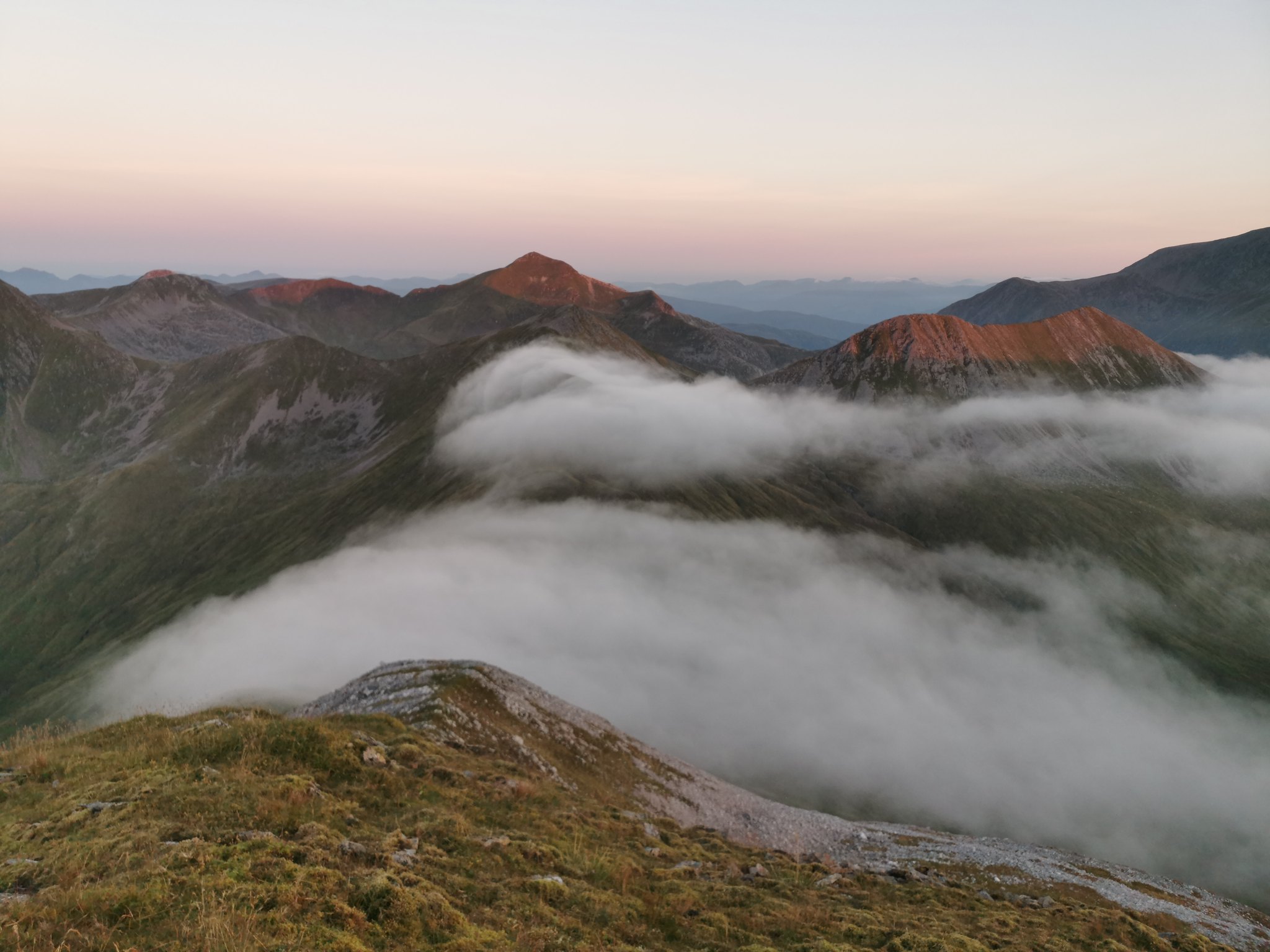 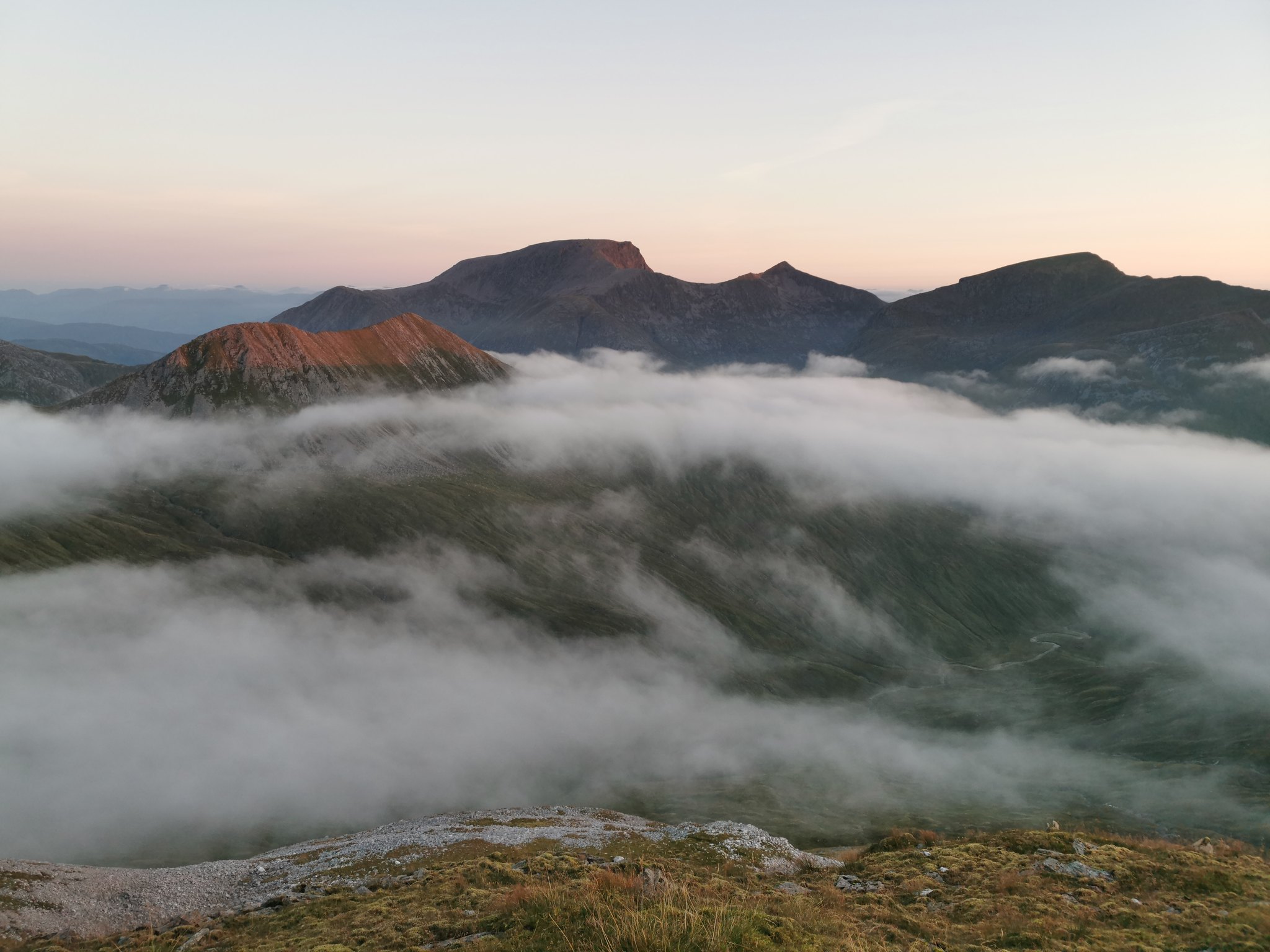 Morning light on An Gearanach 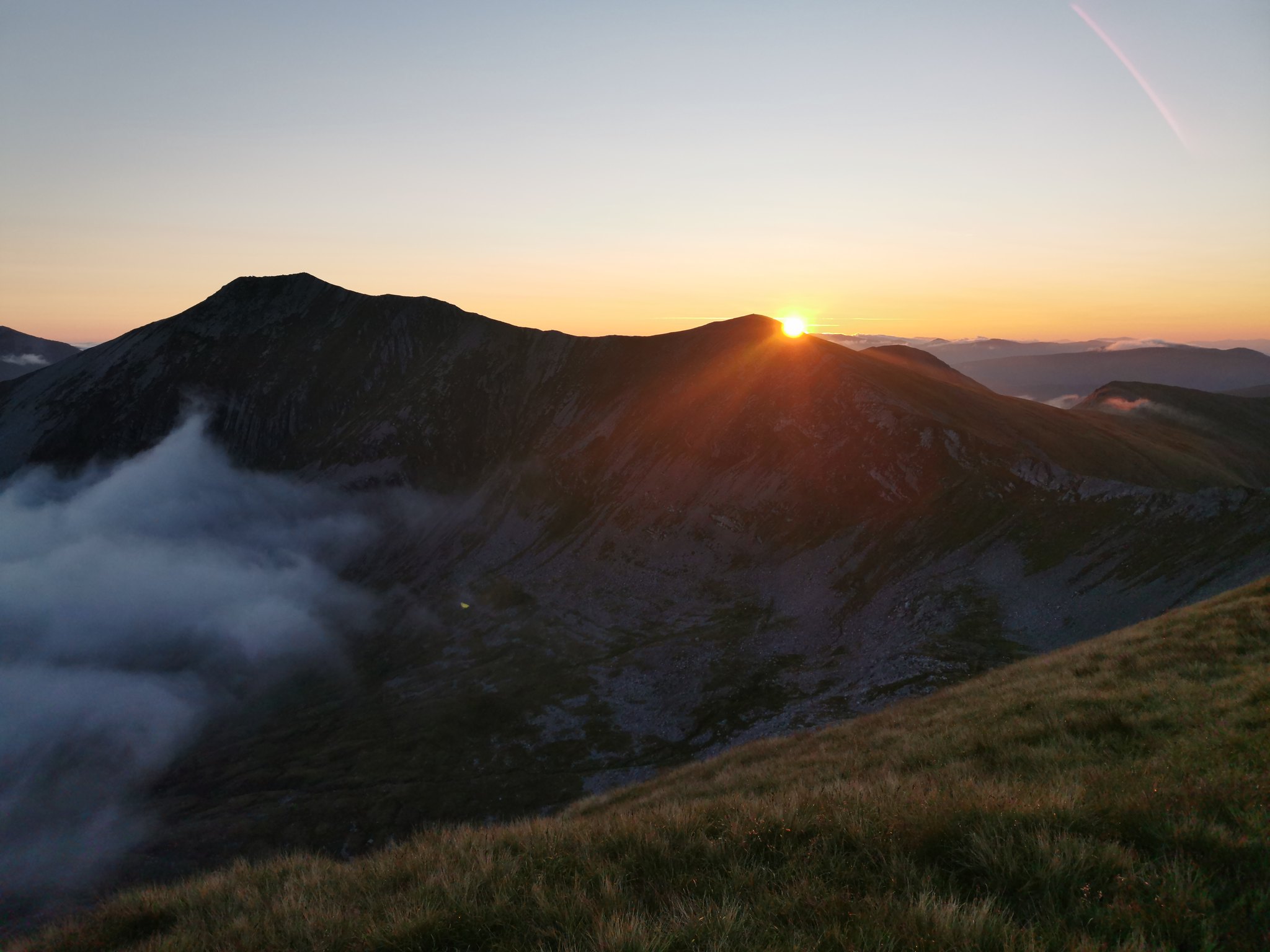 The sun finally rising above the shoulder of Binnein Mor 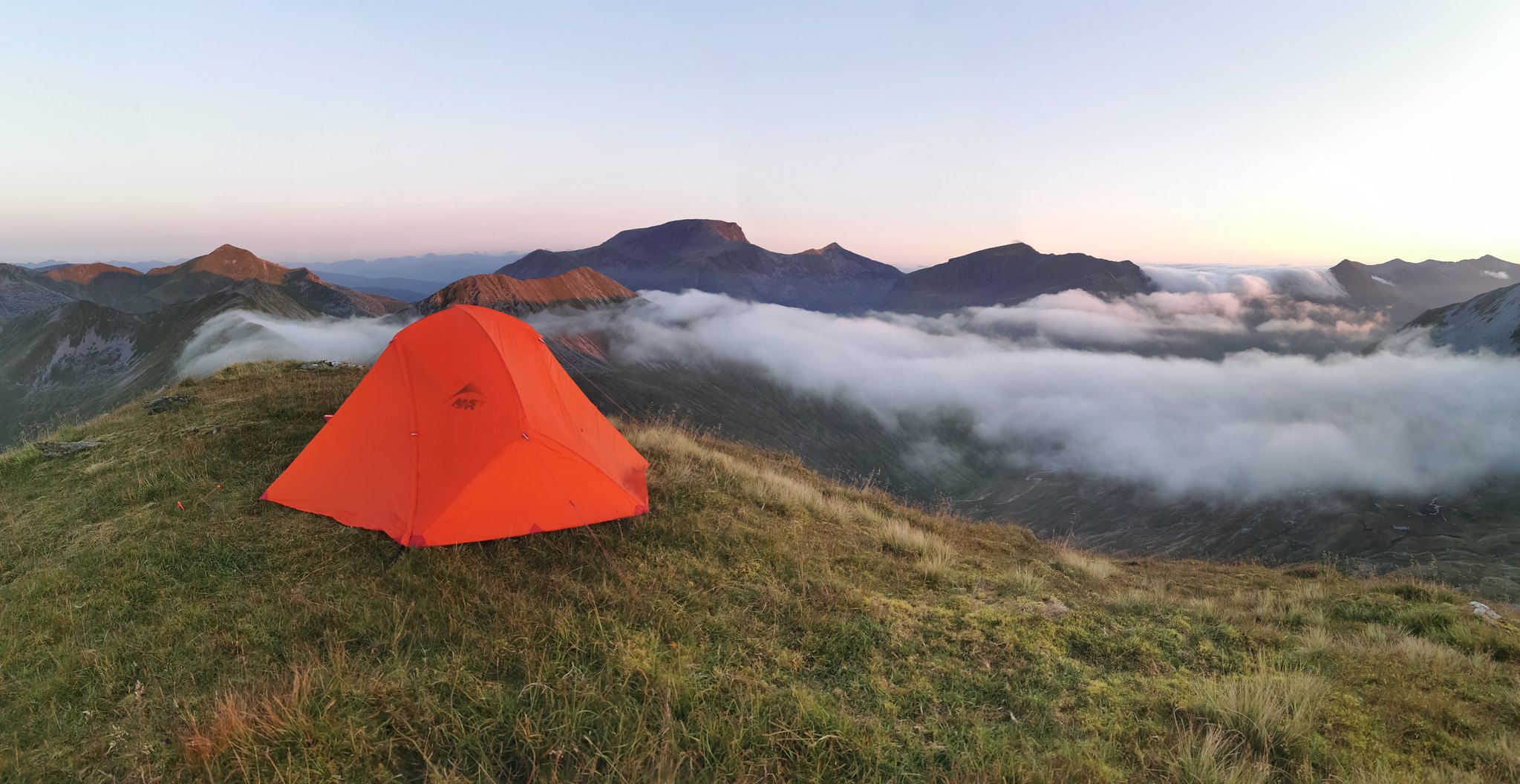 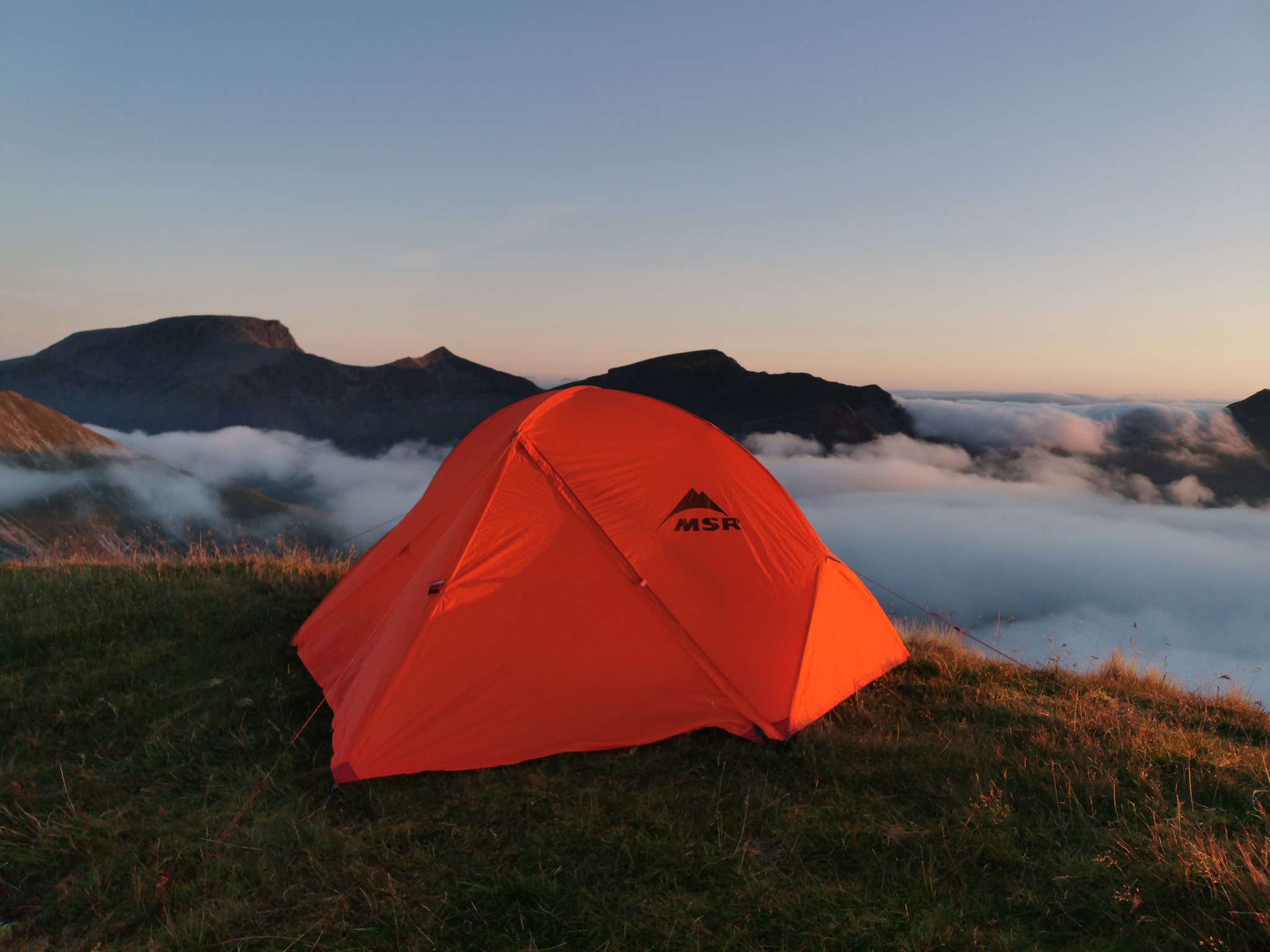 Last shot of the tent before packing up

I was packed up and on the move at 6.50am. It was already warm and I was already just wearing a long sleeved base layer, still not a breath of wind. Looking ahead, it wasn't far to Stob Coire a'Chairn and An Gearanach, so I planned to quickly fire up both of those and then descend via the zig zag path into Coire na Ba. I took on plenty water and then dumped my bag again before the final ascent of Stob Coire a'Chairn, which meant I would be bagless for both summits. Ideal! 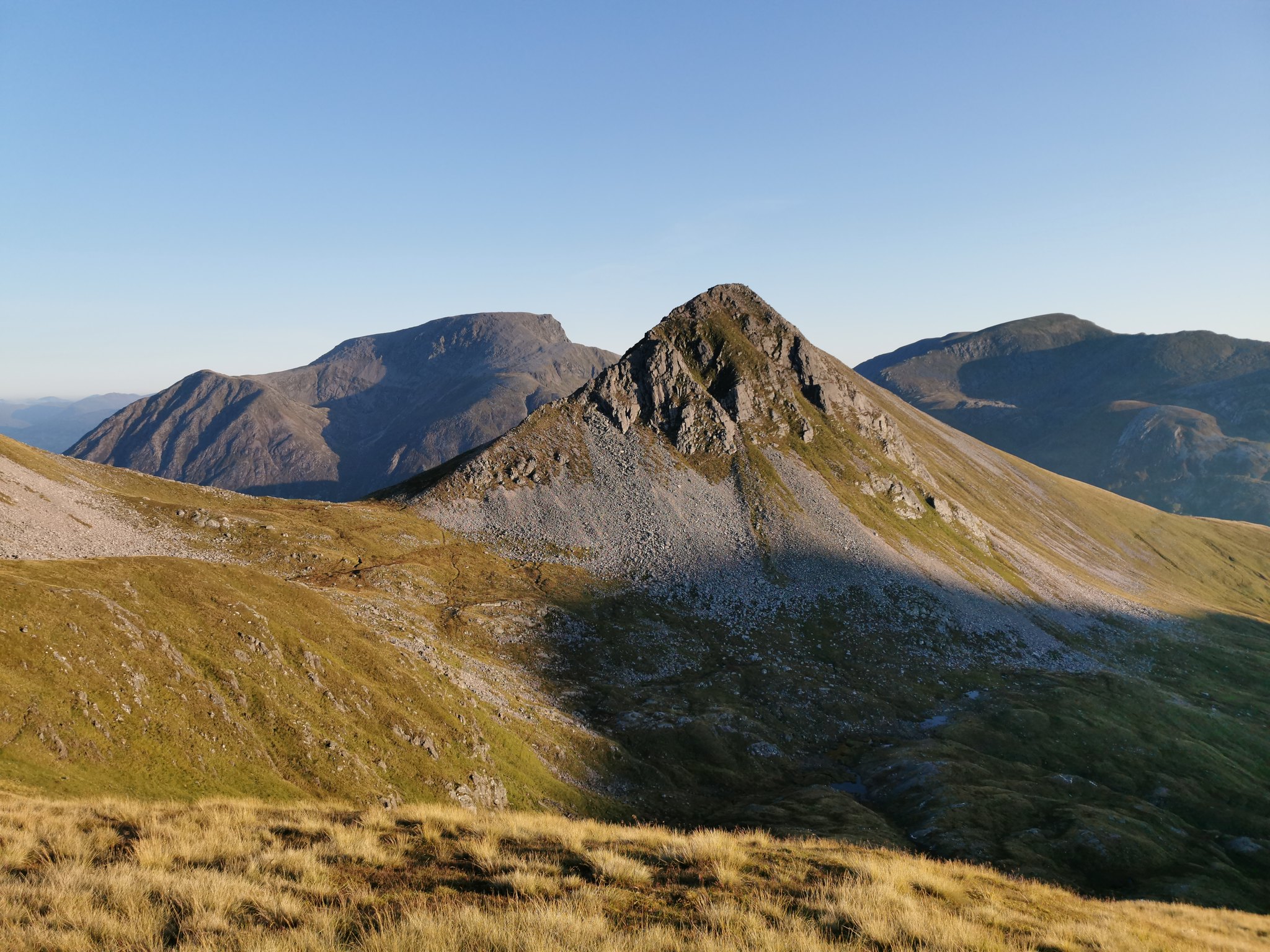 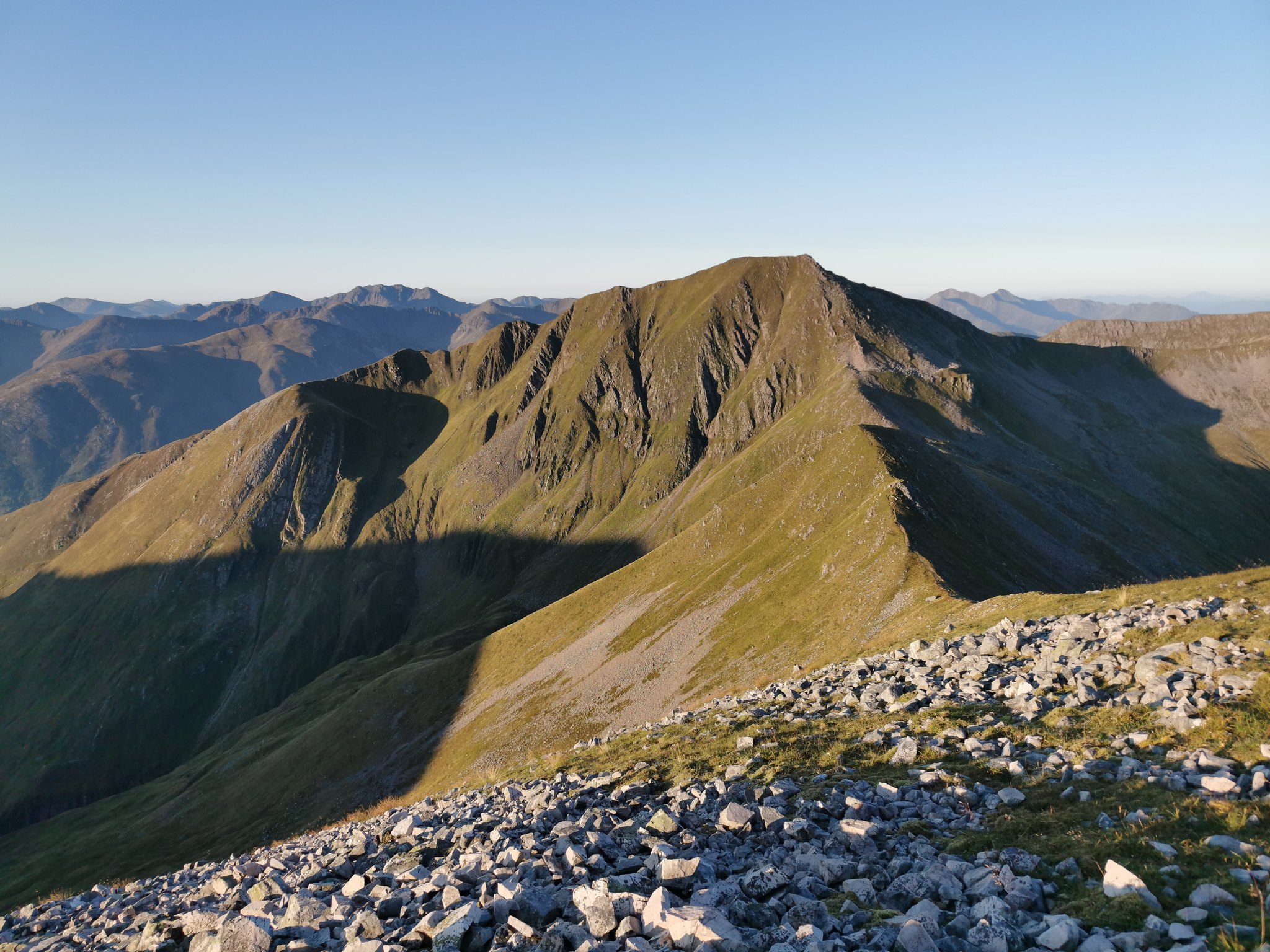 Am Bodach from near the summit of Stob Coire a' Chairn

It only took around half an hour from my camp spot to the summit of Stob Coire a' Chairn. Another summit with nobody around and views to die for, I was absolutely loving it up there. Keeping one eye on the time, I headed off to start the final out and back to An Gearanach, which was looking absolutely stunning in the morning light. I spied a wee green tent at the bealach which you can see in the photo below if you zoom in. It gives a great idea of scale. 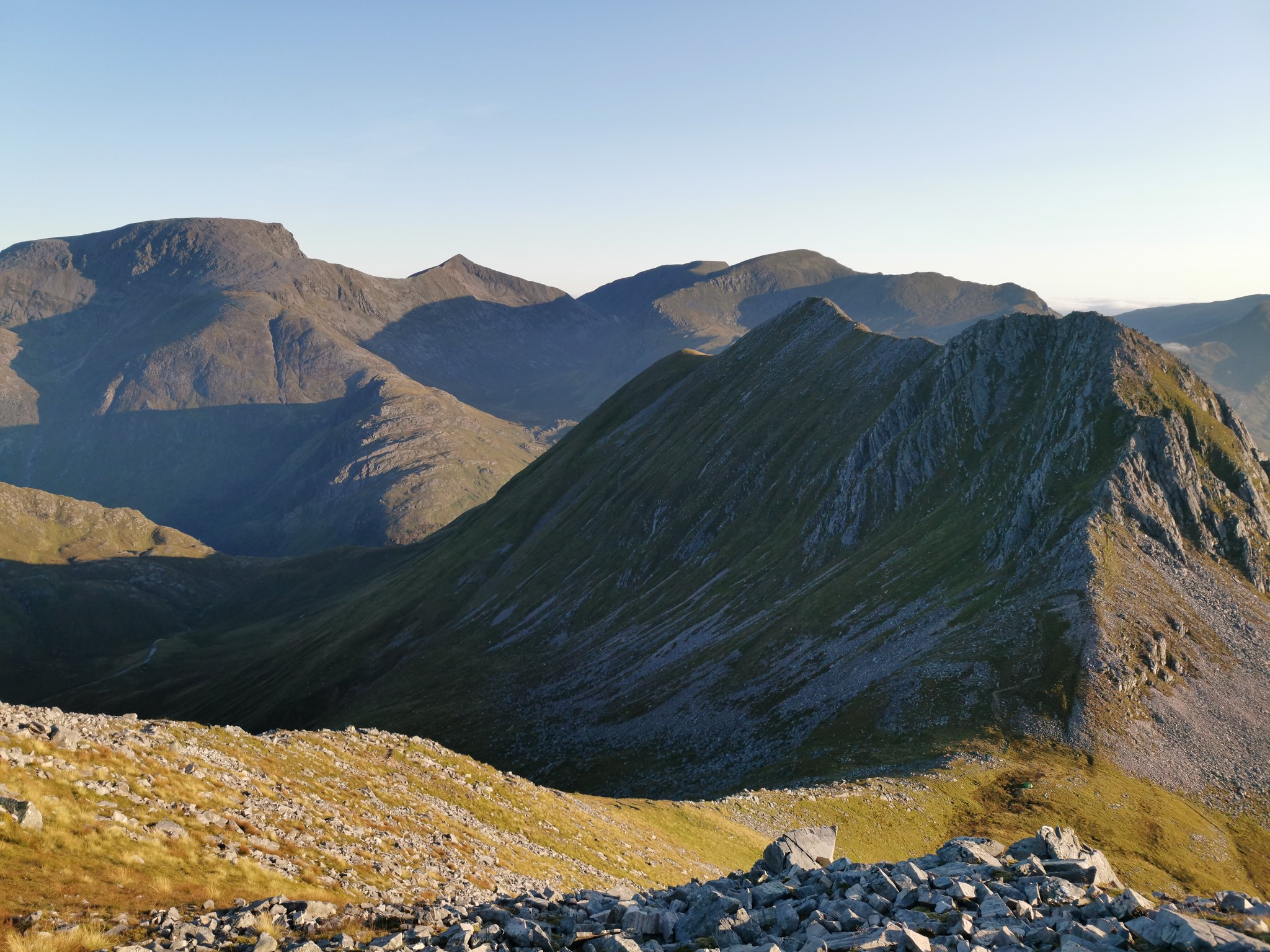 Absolute perfection. Can you spot the tent?

Once down at the tent, I had a quick chat with an Irish couple who were enjoying a chilled start to their day in the tent with the doors open. They were doing the 10 Mamores so had brilliant conditions for the full trip. I then continued up the ridge of An Gearanach, which is great fun and fairly exposed scrambling in places, good fun! 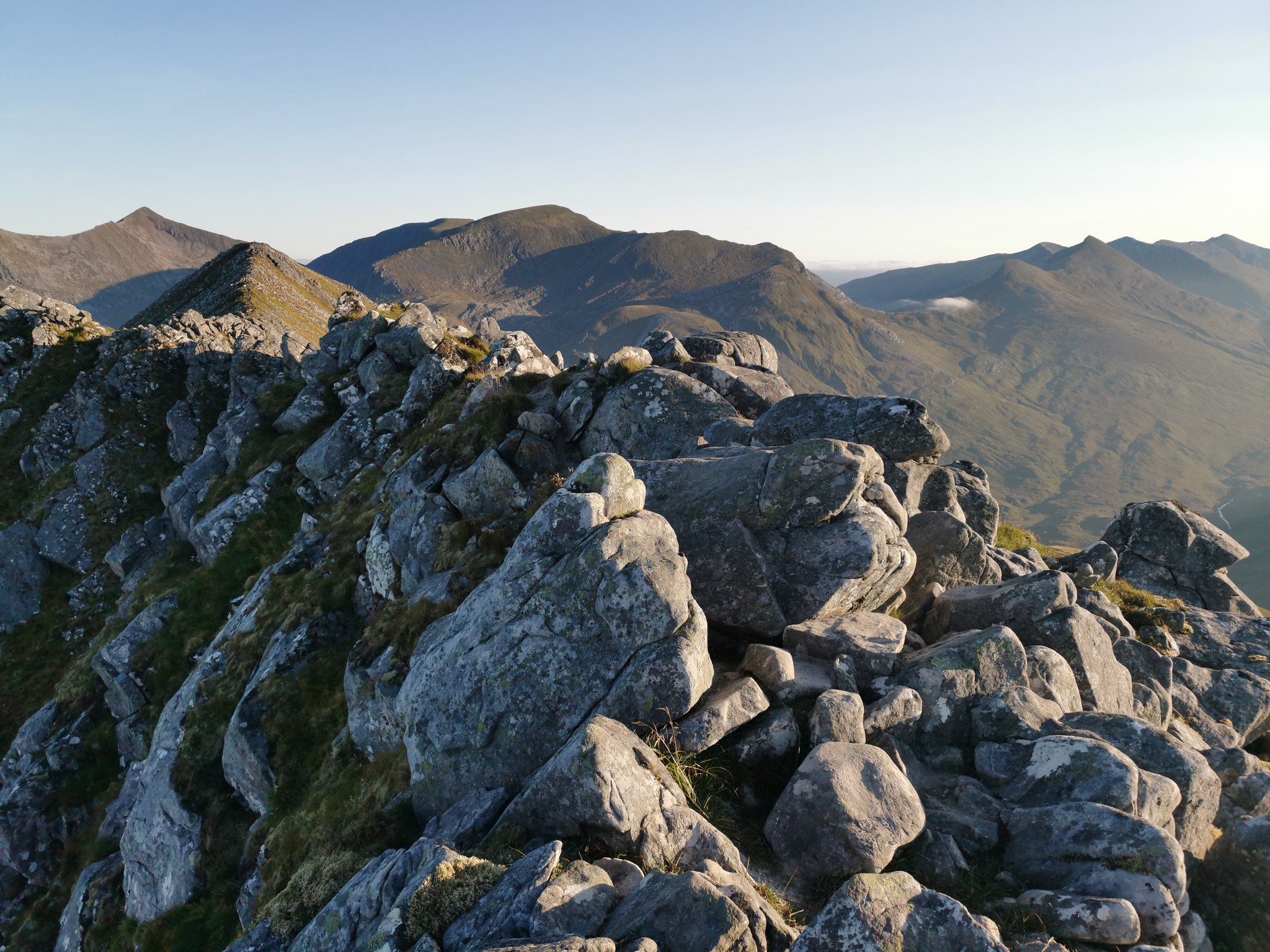 Hitting the summit before 8am, the light and views were just magnificent. I parked my bum and enjoyed them for a good while. As viewpoints go, this is hard to beat. Every direction is just as good to look at.

Pano of the Ring of Steall. Phenomenal scenes (click to enlarge) 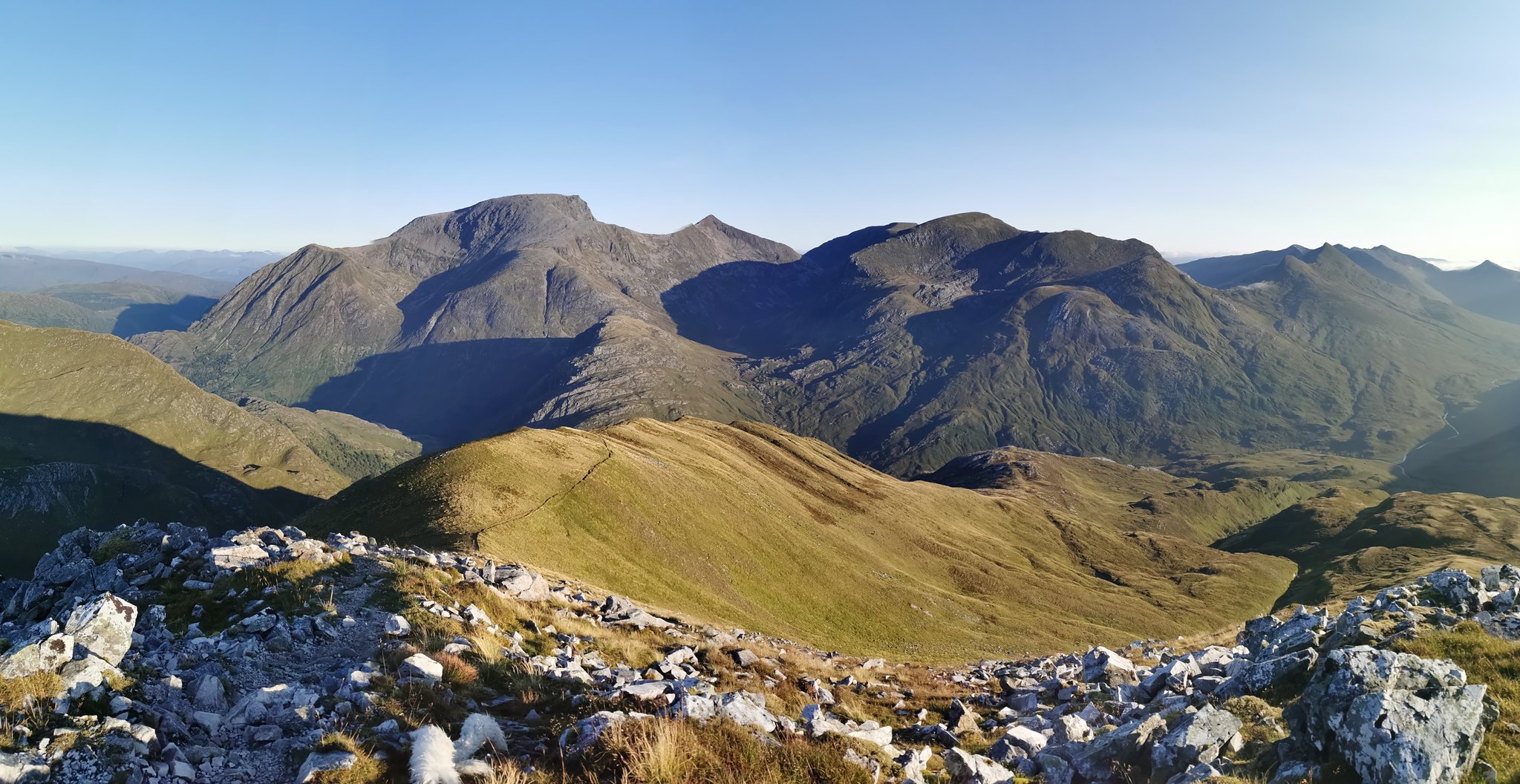 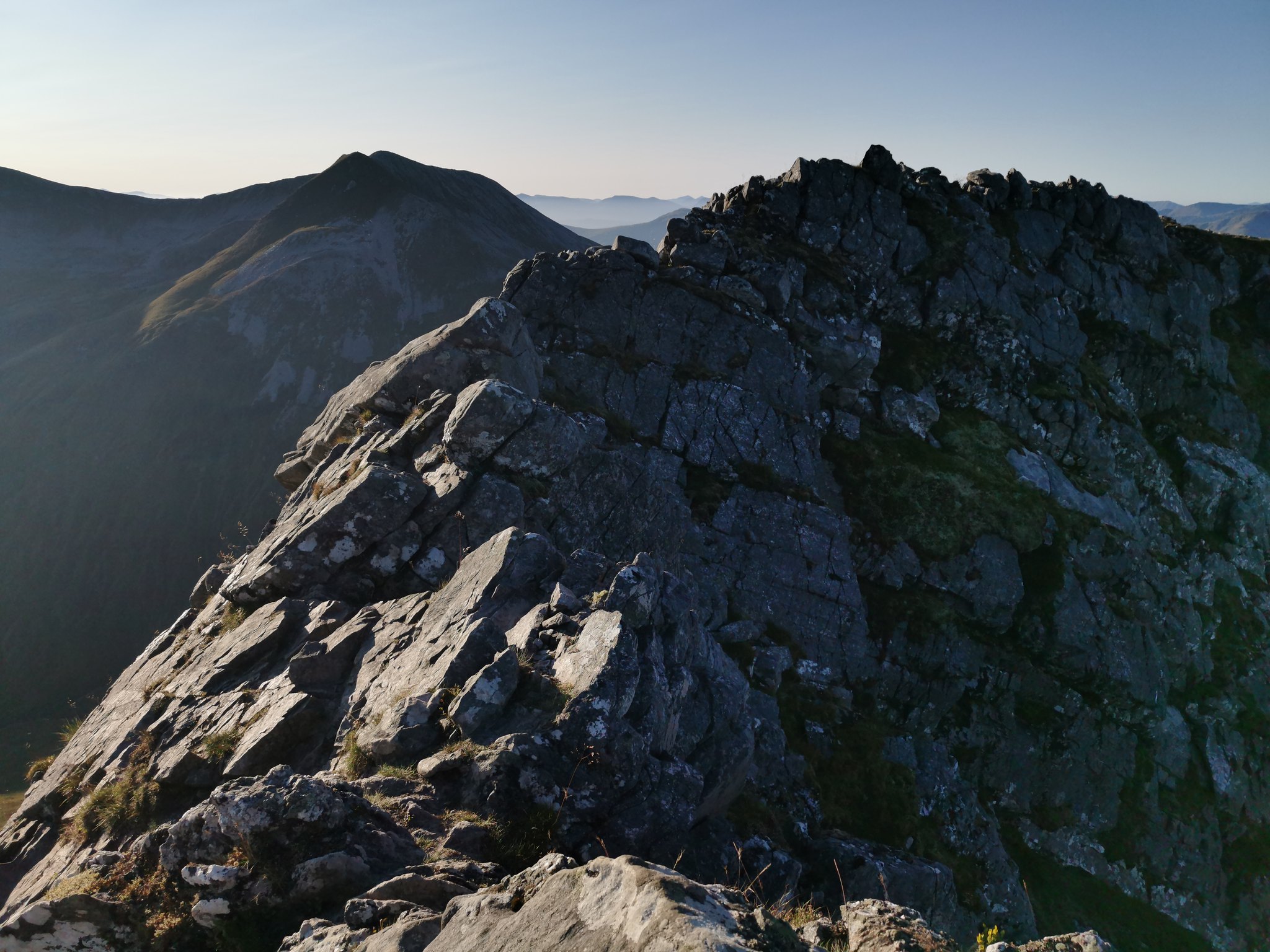 Re-tracing my steps along the ridge 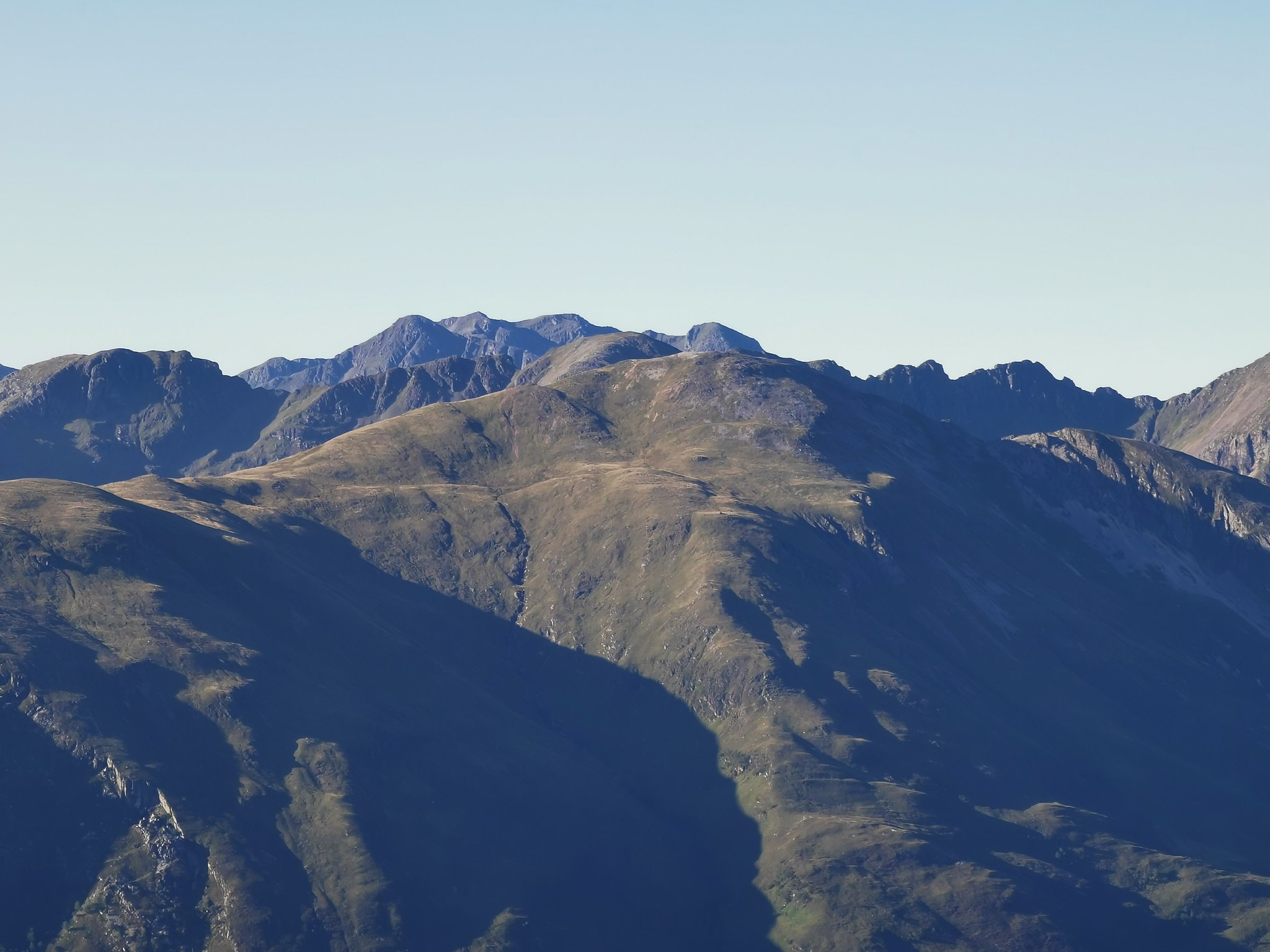 A rare picture towards Bidean and the Aonach Eagach

After leaving the summit, it was time to start heading back to the car, which meant going back over Stob Coire a'Chairn, picking up my bag, down to the bealach and finding the top of the zig-zag path (which is helpfully marked by a small cairn), and battering down to Kinlochleven. The path fairly winds it's way down the coire, but the grassy slopes are very steep so I found it worth following. Before I knew it, I approached the sheep pens and then plain sailing back on the gravel land rover track. I continued on the land rover track longer than I could have and gained a little unnecessary height to get a last view down Loch Leven, before taking the path back down towards Kinlochleven. 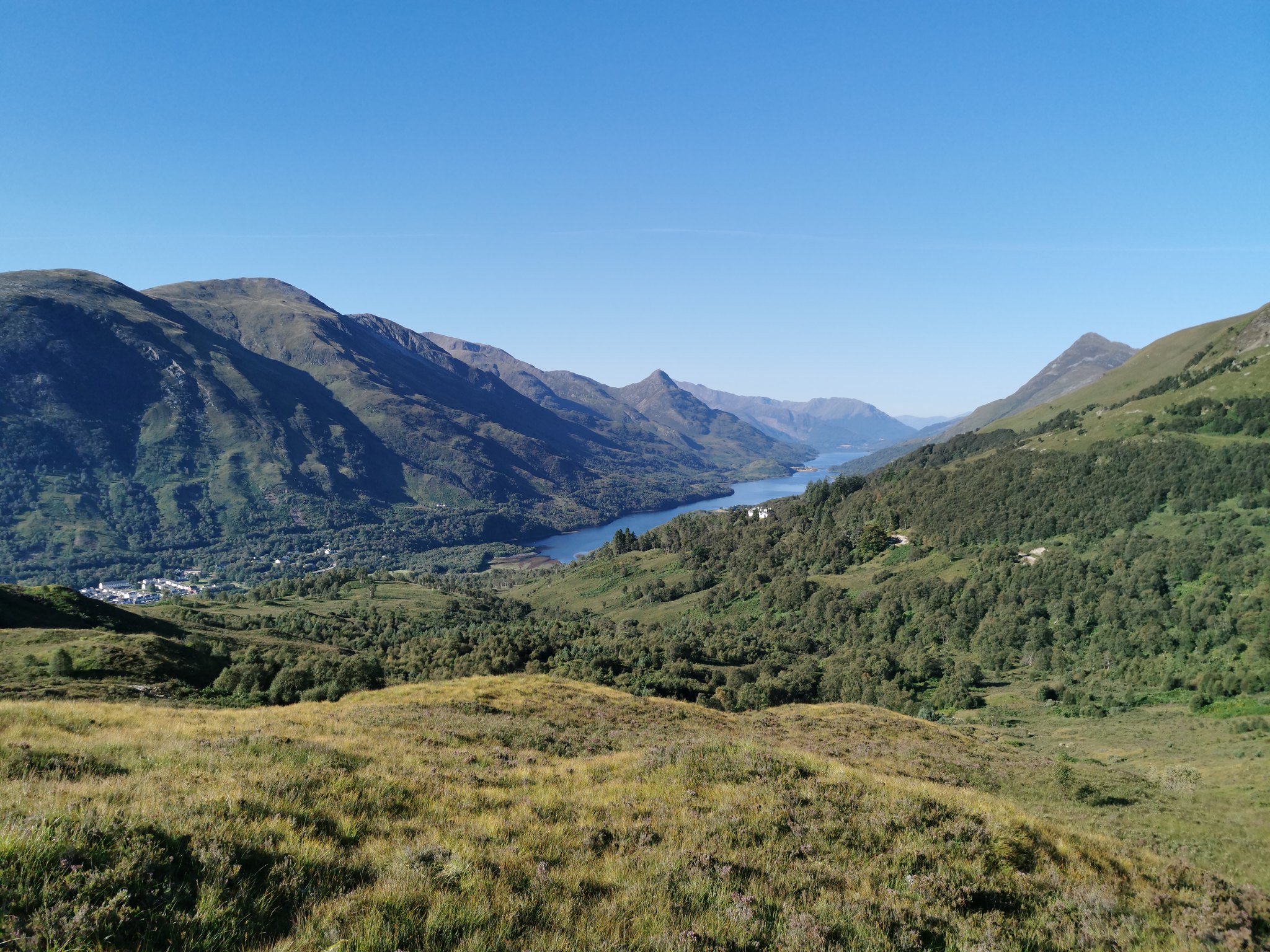 I was back at the car about 10am, delighted with how the morning had gone. Even better, I had time for a second breakfast at Craft and Things before heading home

This didn't disappoint! I couldn't have been luckier with the conditions, yes it was forecast, but I was very lucky not to be plagued by midges given the lack of wind. Result. It would have been great to do the 10 Mamores, but I'll do this over two days another time, it's such a fantastic area to go back to.

My overall time was 22 hours, and walking time was just over 9 hours for the 6 munros. Dumping the bag certainly helps on this route, Binnein Mor and Na Gruagaichean were the only summits that it appeared on! This route was well up there with my favourite overnight routes so far, I'm looking forward to going back already...


Meall a' Bhuachaille with Annie and Laura