Winter is back! Beinn Teallach and Beinn a' Chaorainn

After a lengthy forced absence from the hills due to endless lockdowns and the arrival a new baby, it was finally time to return to the hills, at least for a day. My chance also coincided with a hefty dump of fresh snow across much of the Highlands. I decided on Beinn Teallach and Beinn a'Chaorainn and left the house at 5am.

As per the WH description, there's space for around 5 cars perhaps at the start of the walk, but I was the only car there when I set off at 7.20am. The route starts off on a good forest track for around 1.5km, before turning off through a sheep field on a boggy faint ATV type track. Definitely make sure you have your waterproof boots and gaitors on for this, as it would be completely underwater during wet periods. Shortly after, I was into the snow line and never saw a path again until I was off the hills. I basically just took a straight line up Beinn a'Chaorainn and trudged my way through the snow. The weather was annoyingly a bit cloudy but I hoped it would clear before the summit. It didn't, but thankfully it did shortly afterwards. 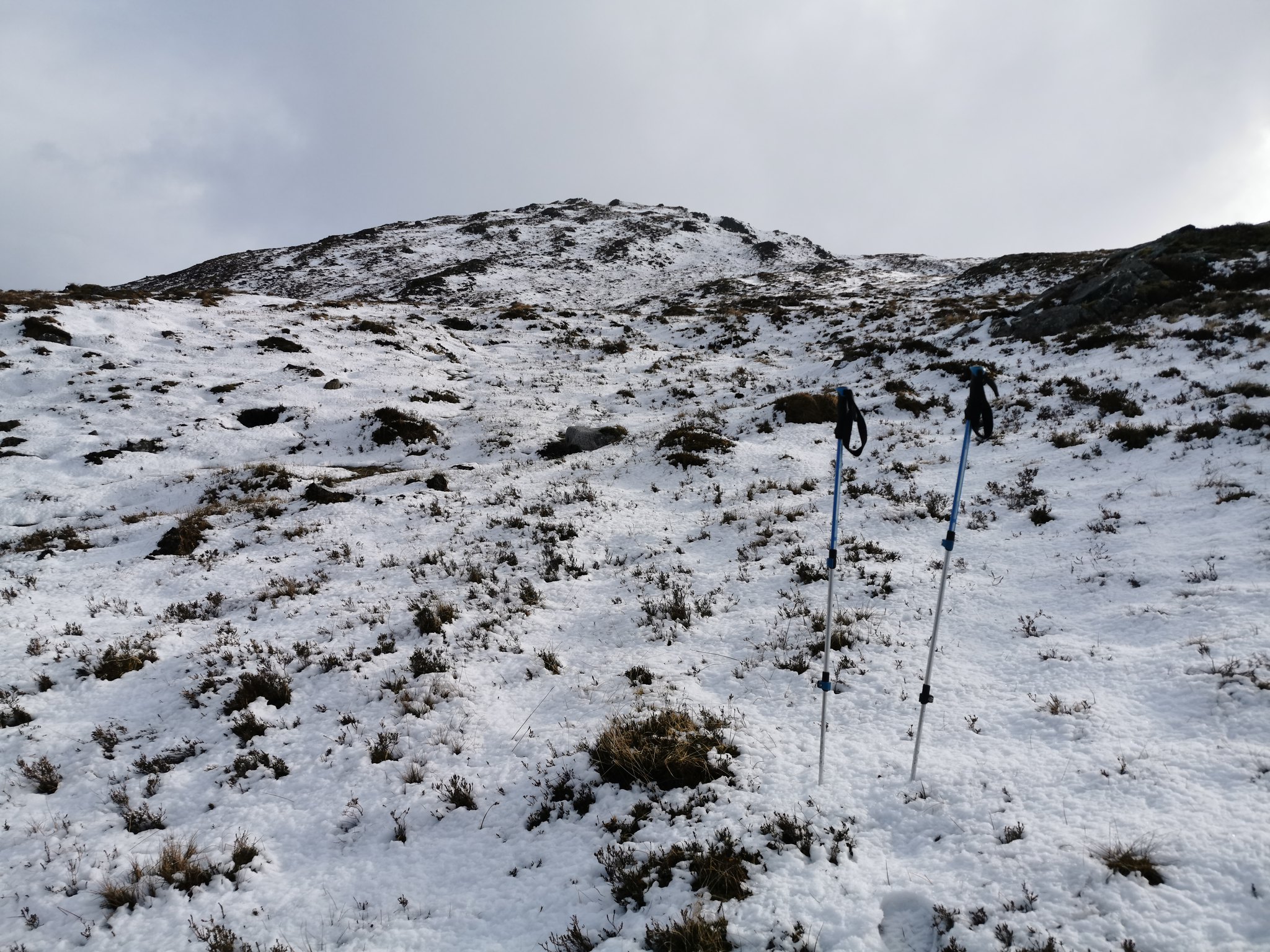 Taking a straight line towards the summit of Beinn a'Chaorainn

The summit of Beinn a'Chaorainn took 1hr 35 mins from the car and is pretty straightforward. No idea if there is a path or not due to the snow! Whilst on the summit, in a whiteout, I noticed glimpses of the ridge and also large cornices around the edge, so took my time to stay well clear of these and waited for the cloud to clear... 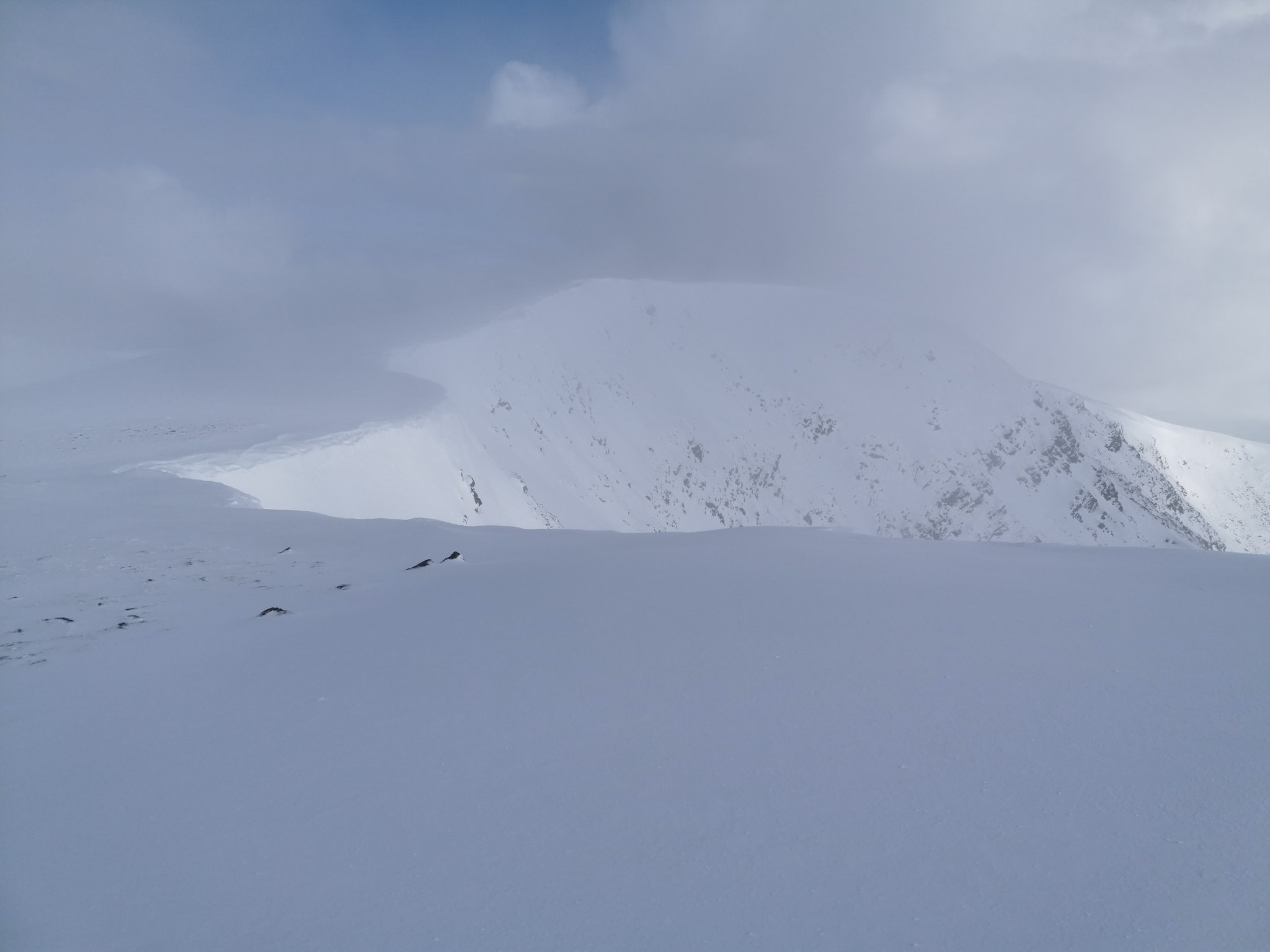 First glimpses of the summit ridge, never went anywhere near the edge unless I saw rock 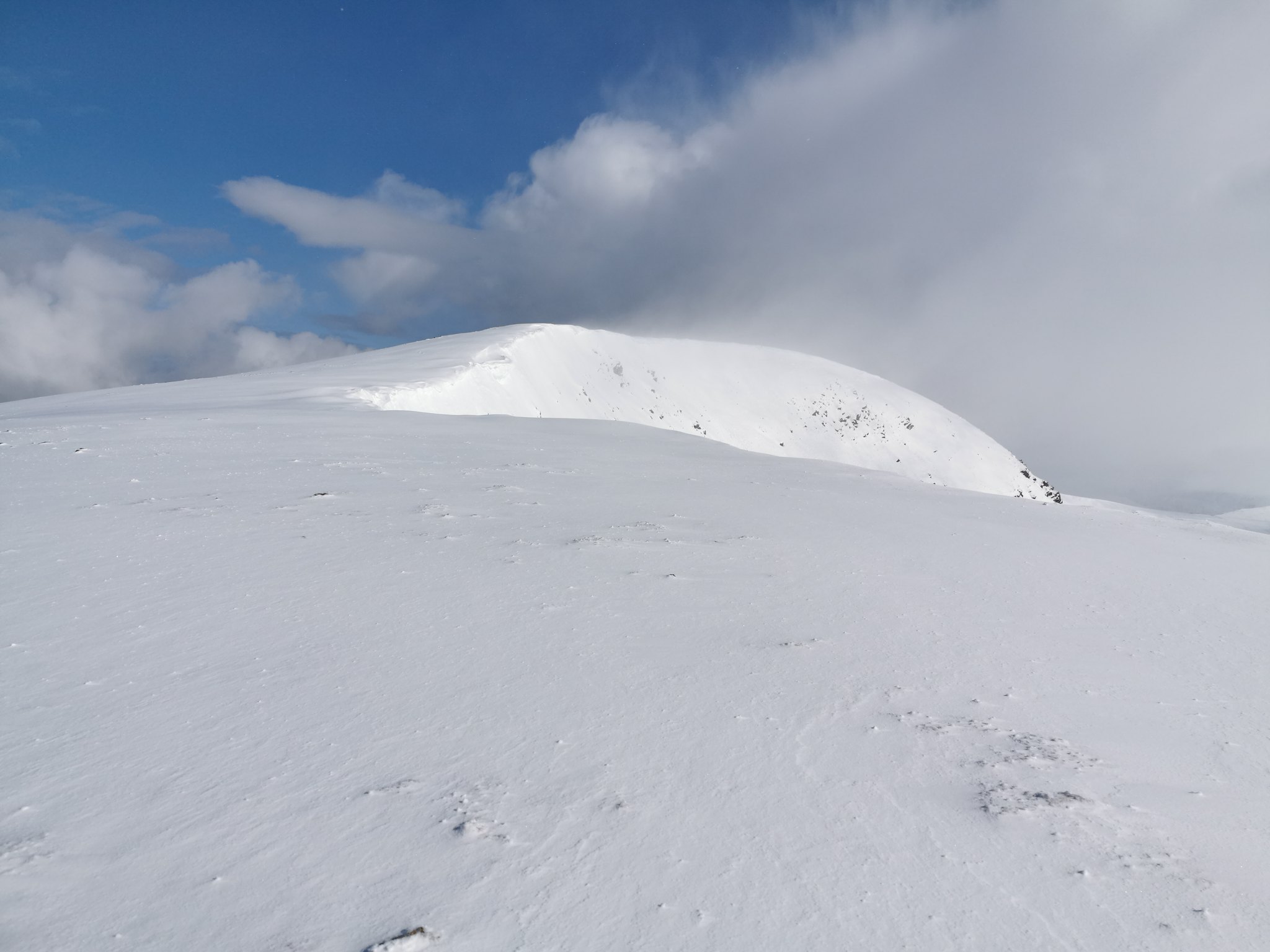 Conditions improving, trudging my way along the ridge in a foot of fresh snow 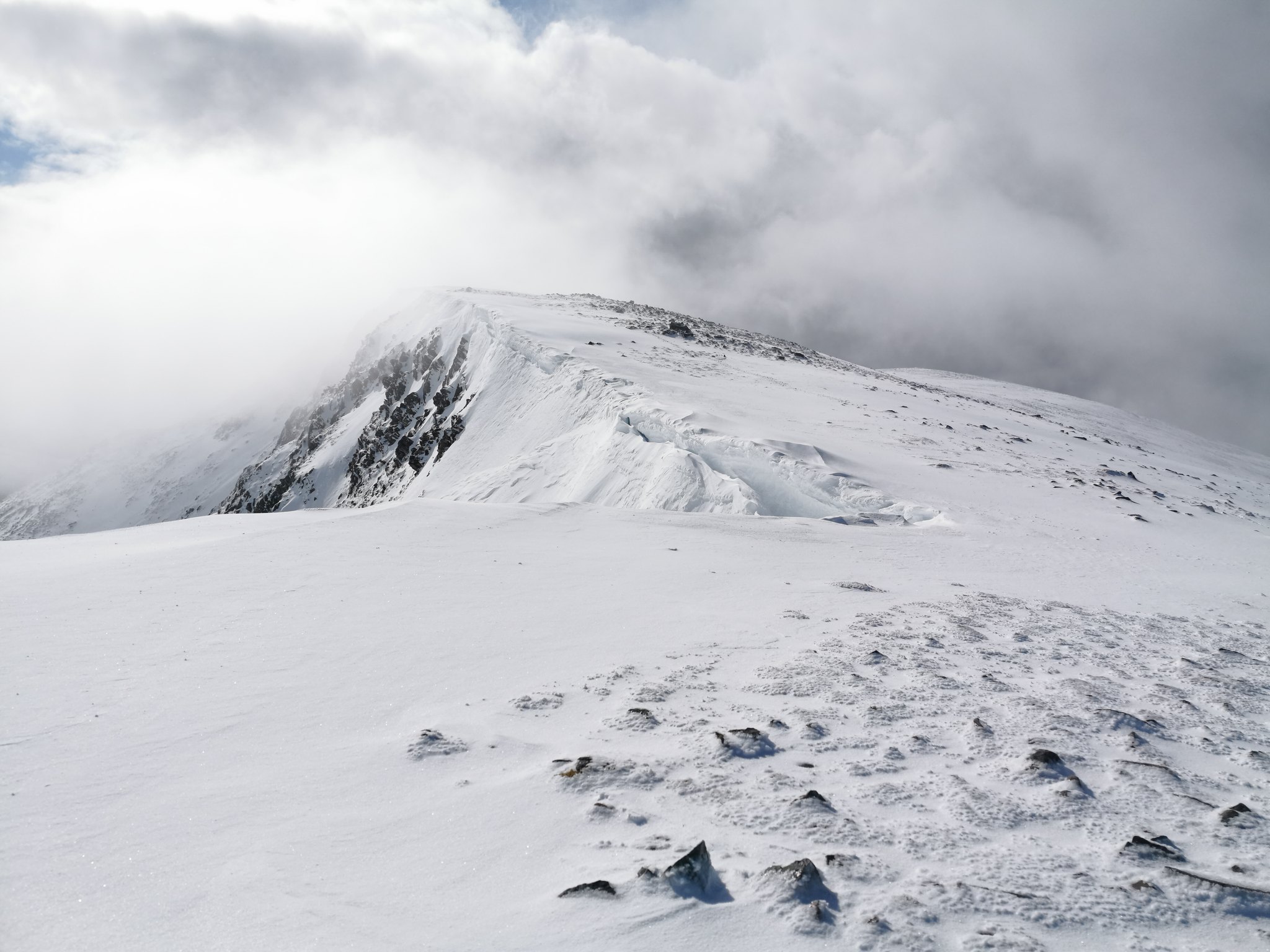 Looking back at the large cornice 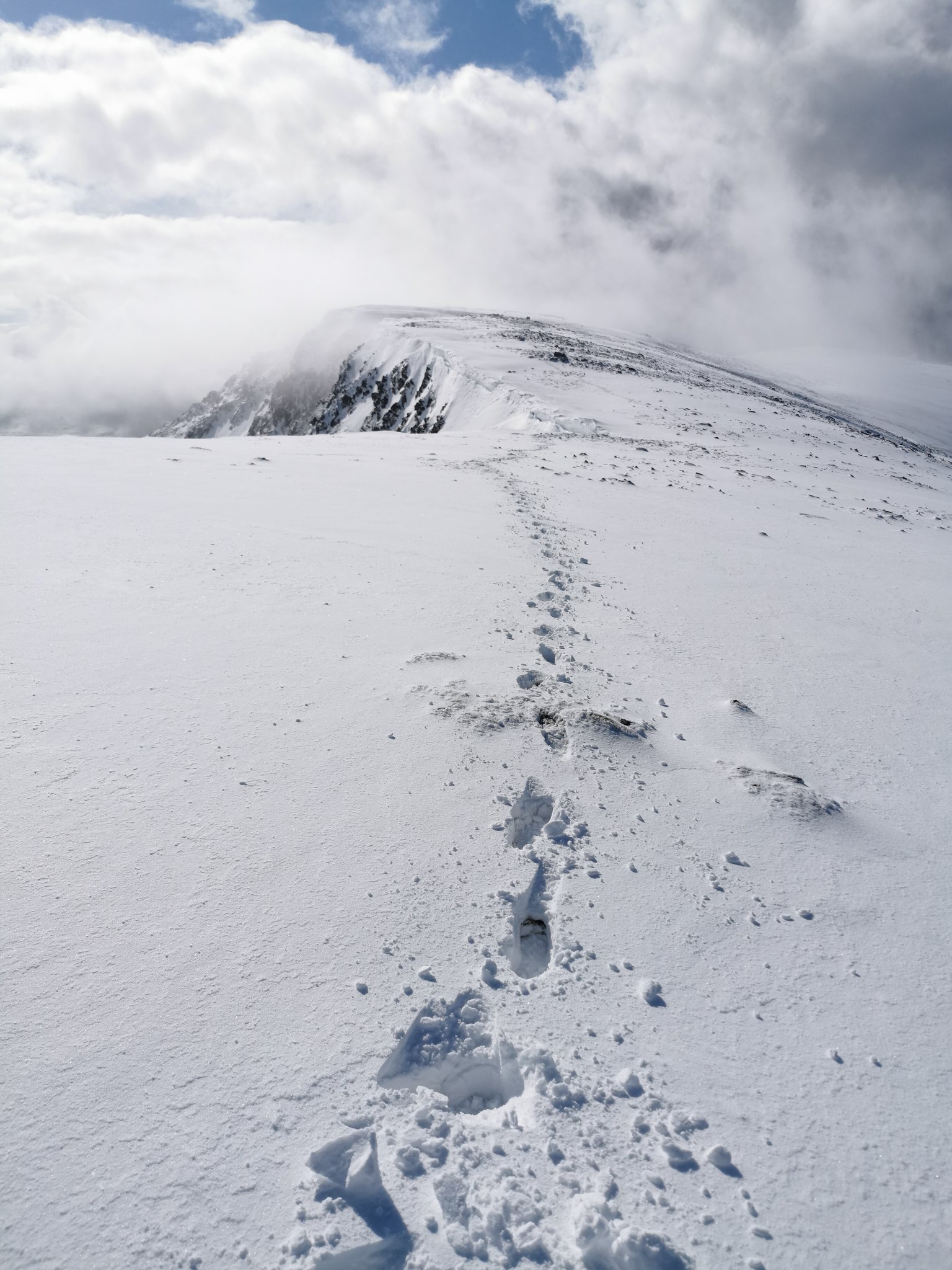 Looking back at my footprints, I had a blank canvas all day and never saw a soul. 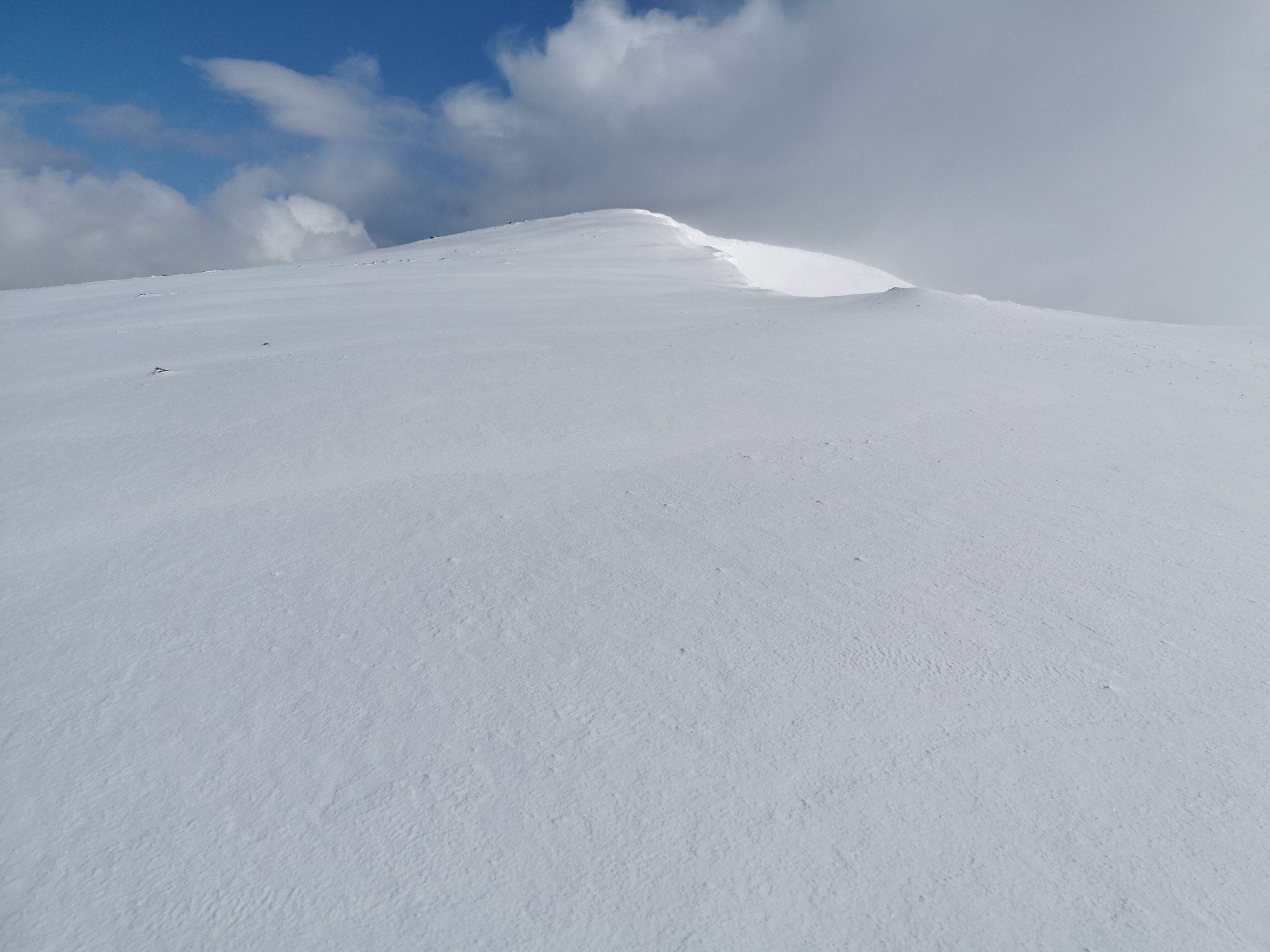 Pure white everywhere, keeping way back from the edge. 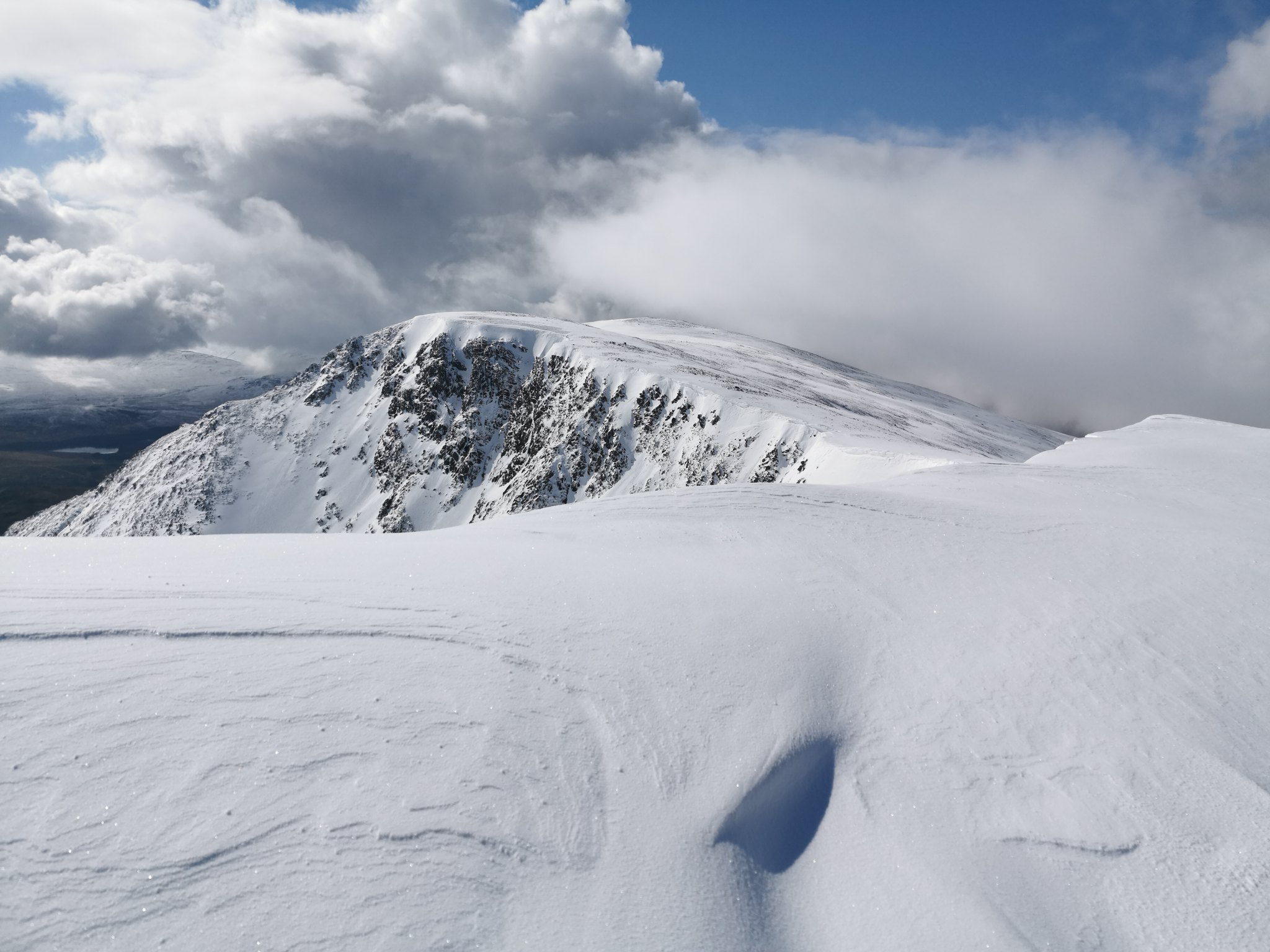 Looking back to the summit of Beinn a'Chaorainn as the sun established itself. 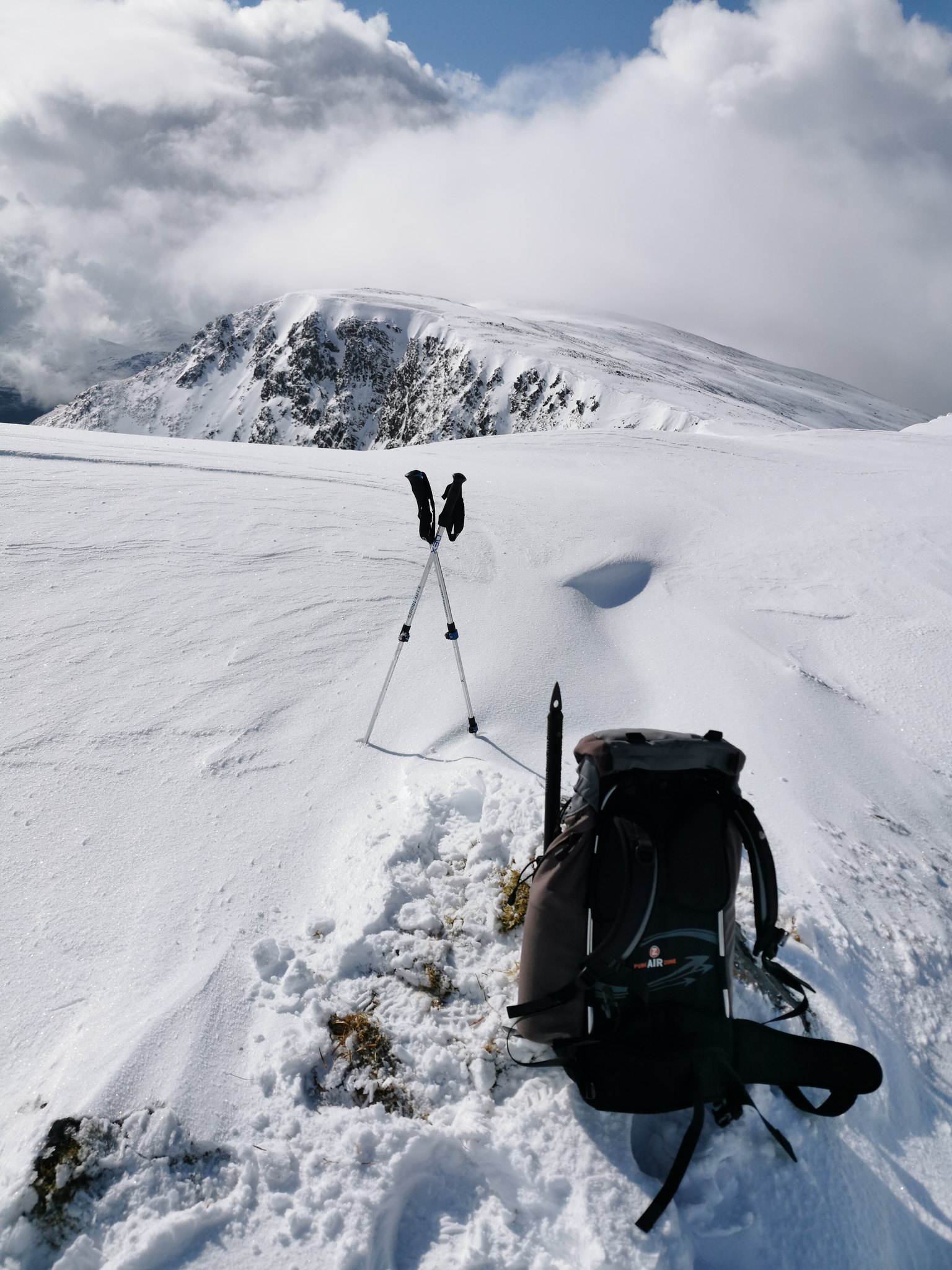 Sandwich time by some rocks with a view. The glare off the snow was incredible, taking the shades off for even a second was unbearable! 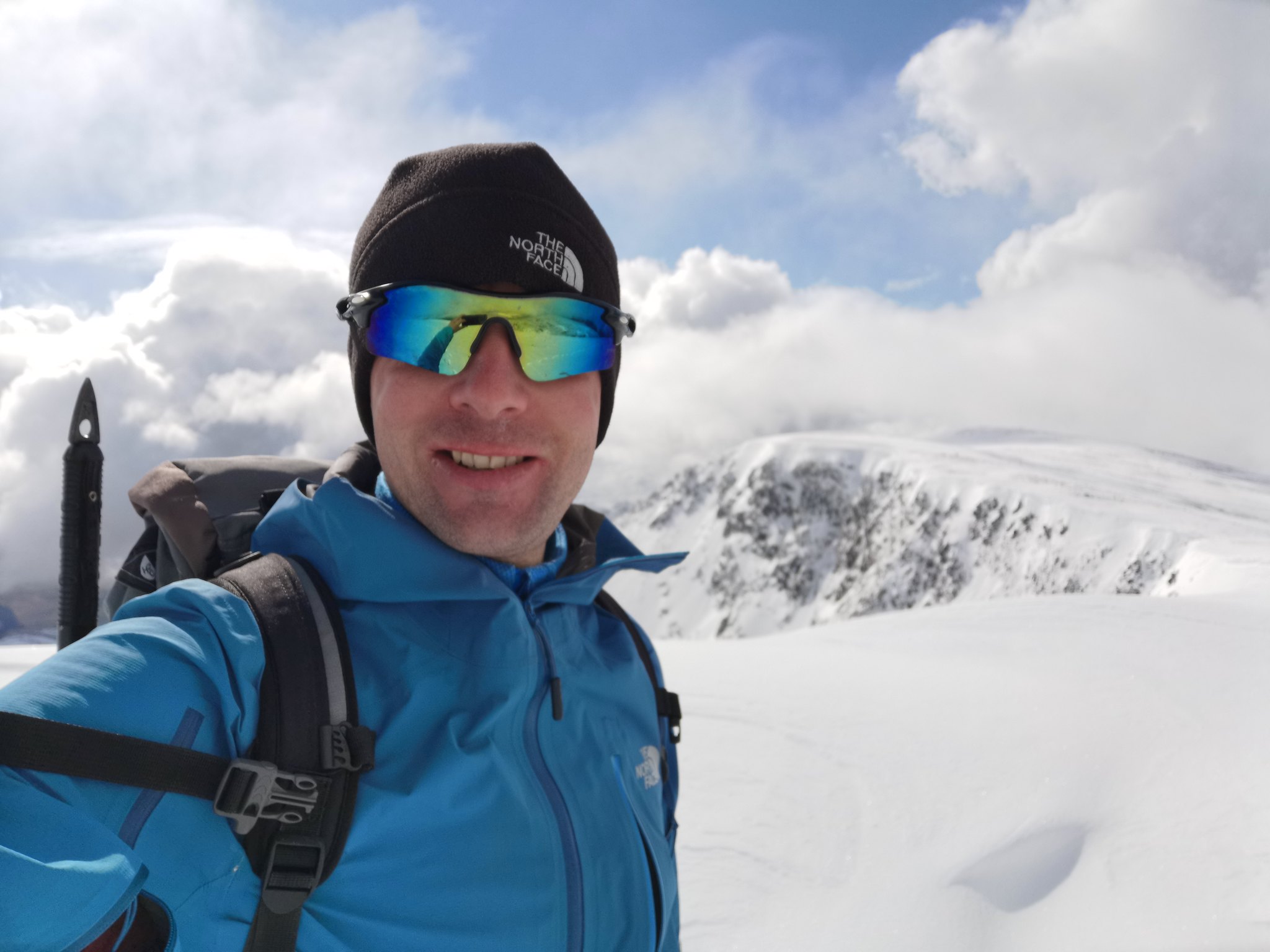 A happy camper, first proper hill in about 7 months

After taking multiple identical photos along the ridge, I made my way across the the plateau before the descent towards the bealach with Beinn Teallach. Without any rocks, footprints or markings, it was completely featureless and would have been a nightmare in a complete whiteout, especially with the large cornice following the full length of the summit ridge. Thankfully I could see where I was going so never had to focus on nav. 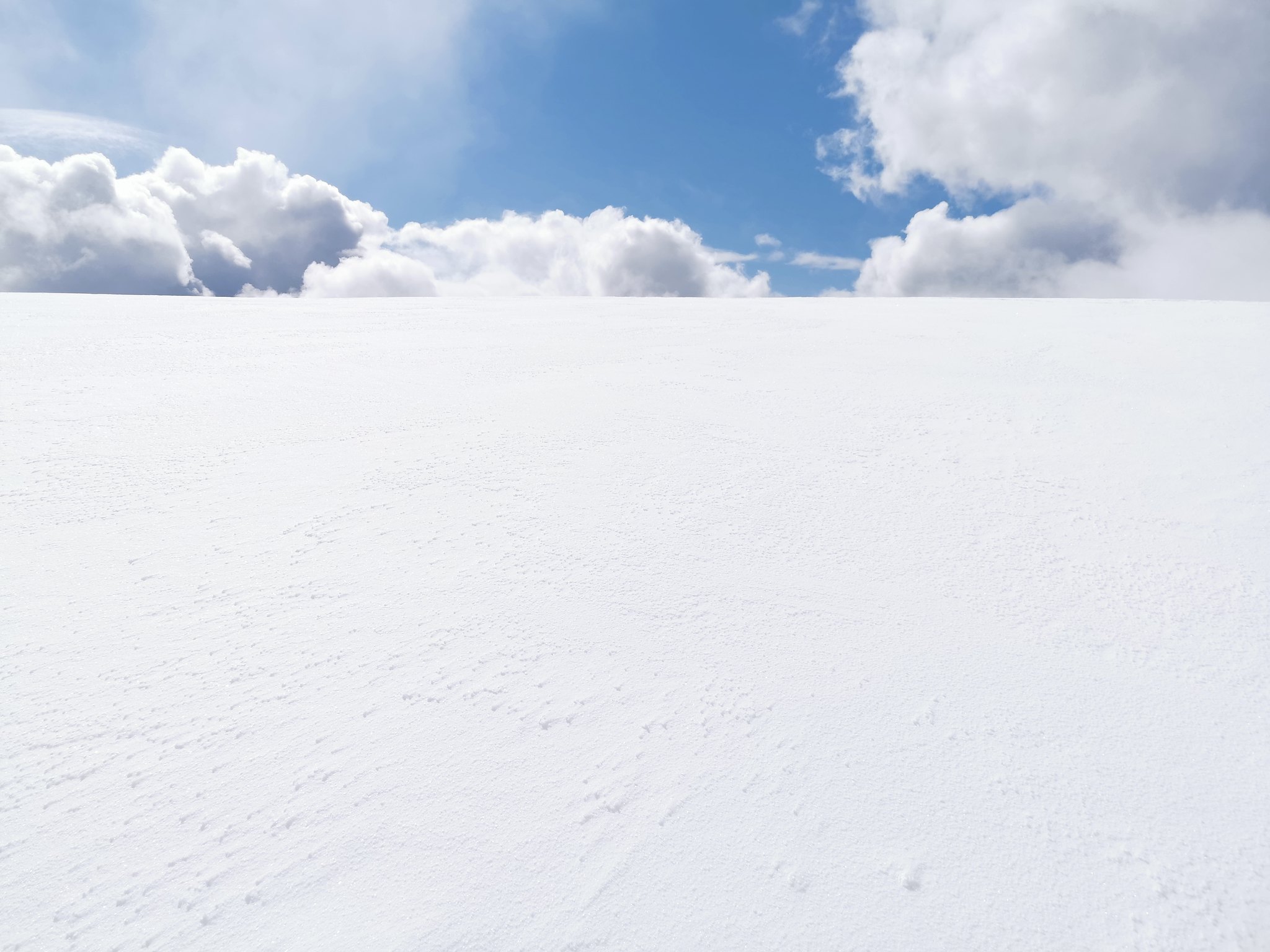 The view to the east, ending with a cornice somewhere... 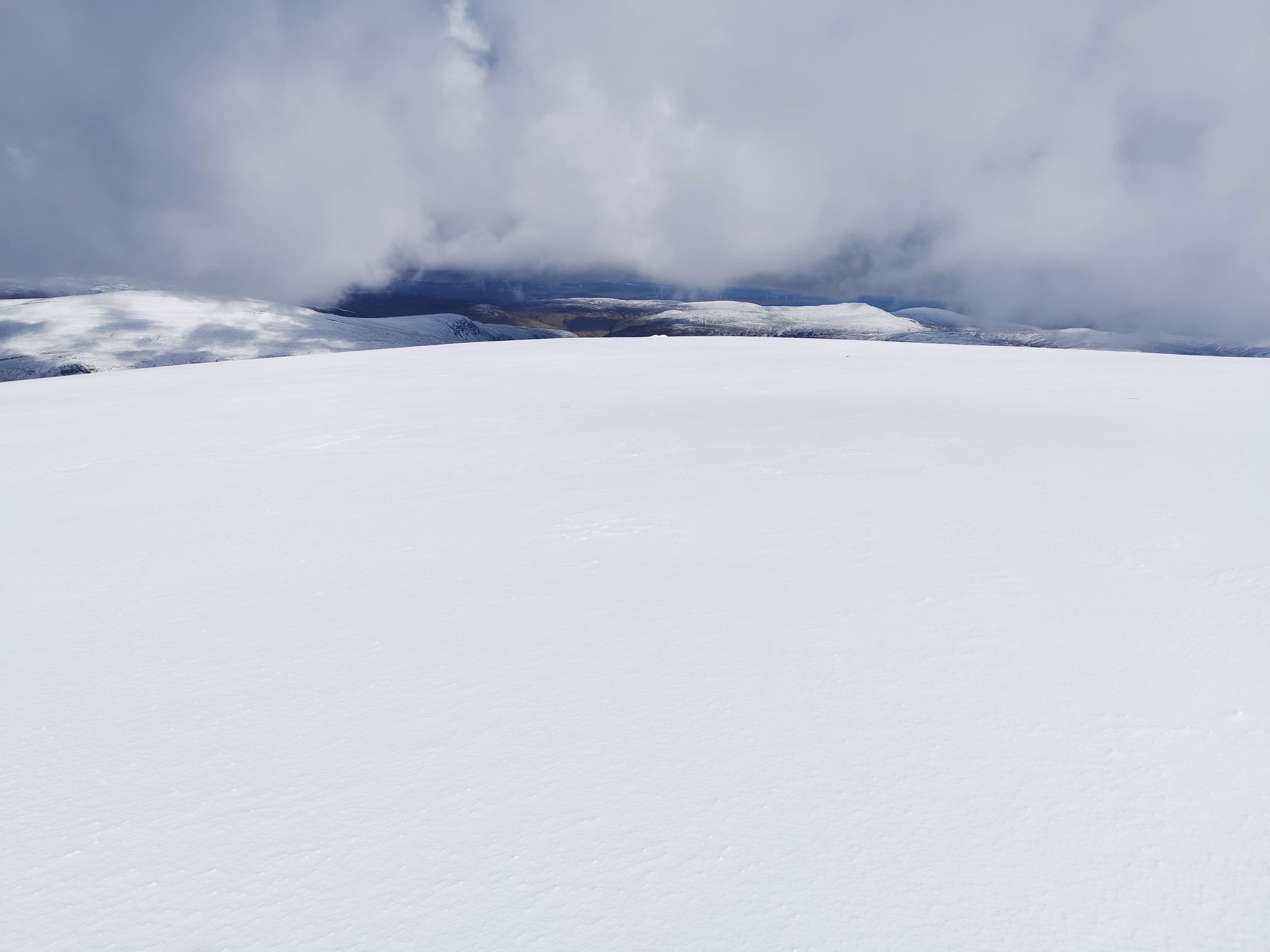 The way ahead. Imagine this in a whiteout. 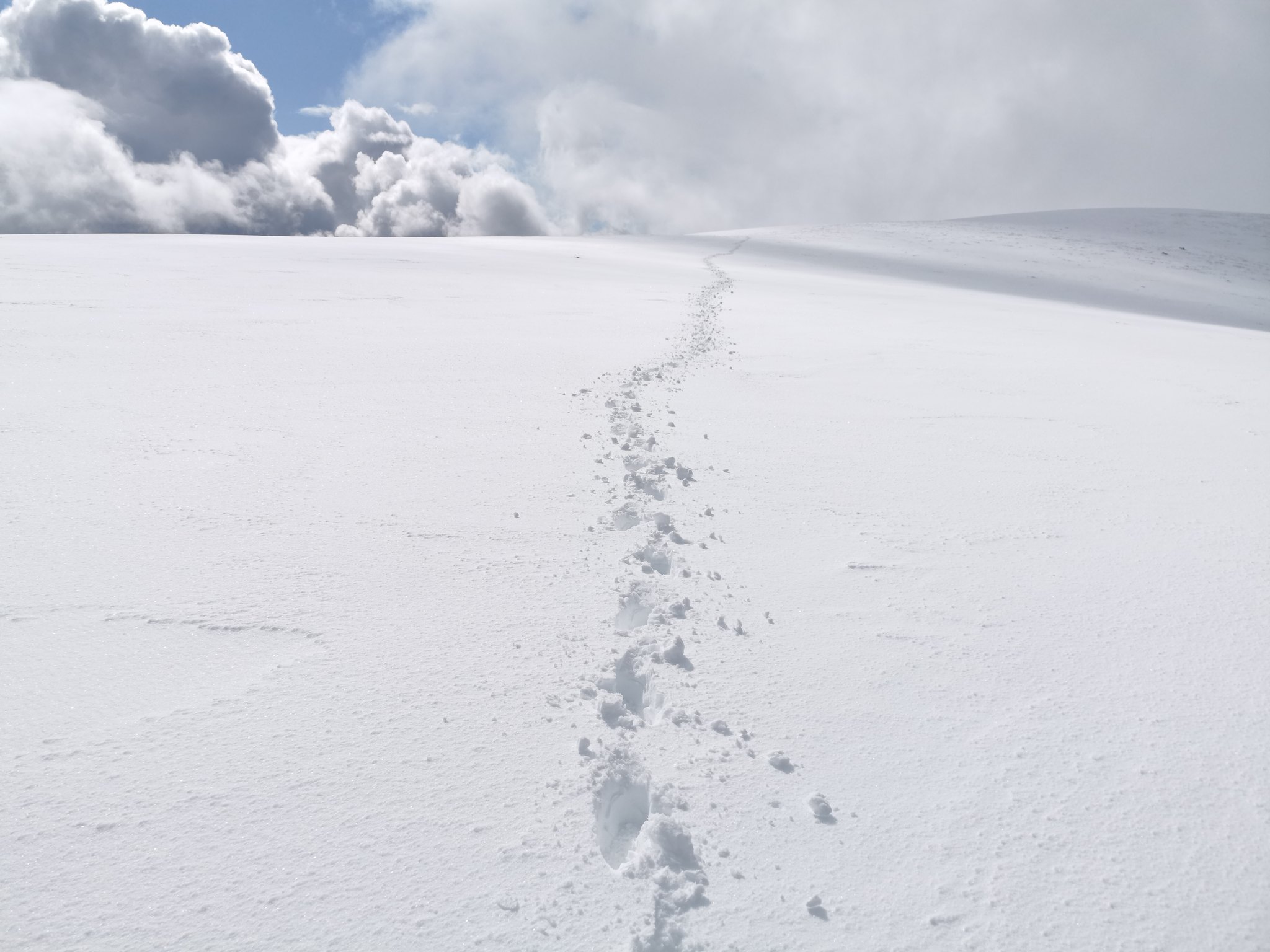 Turning round from the same location to capture my tracks

The descent towards the bealach with Beinn Teallach seemed to quite significant, around 400m. A bit care was needed in the snow and boulders, but otherwise I'm sure the snow makes for much quicker descents than the care normally required with rocky/boggy descents. I picked a place at the bealach and made a bee-line for it. I got the impression that the lower slopes would be a boggy mess when snow wasn't on the ground. 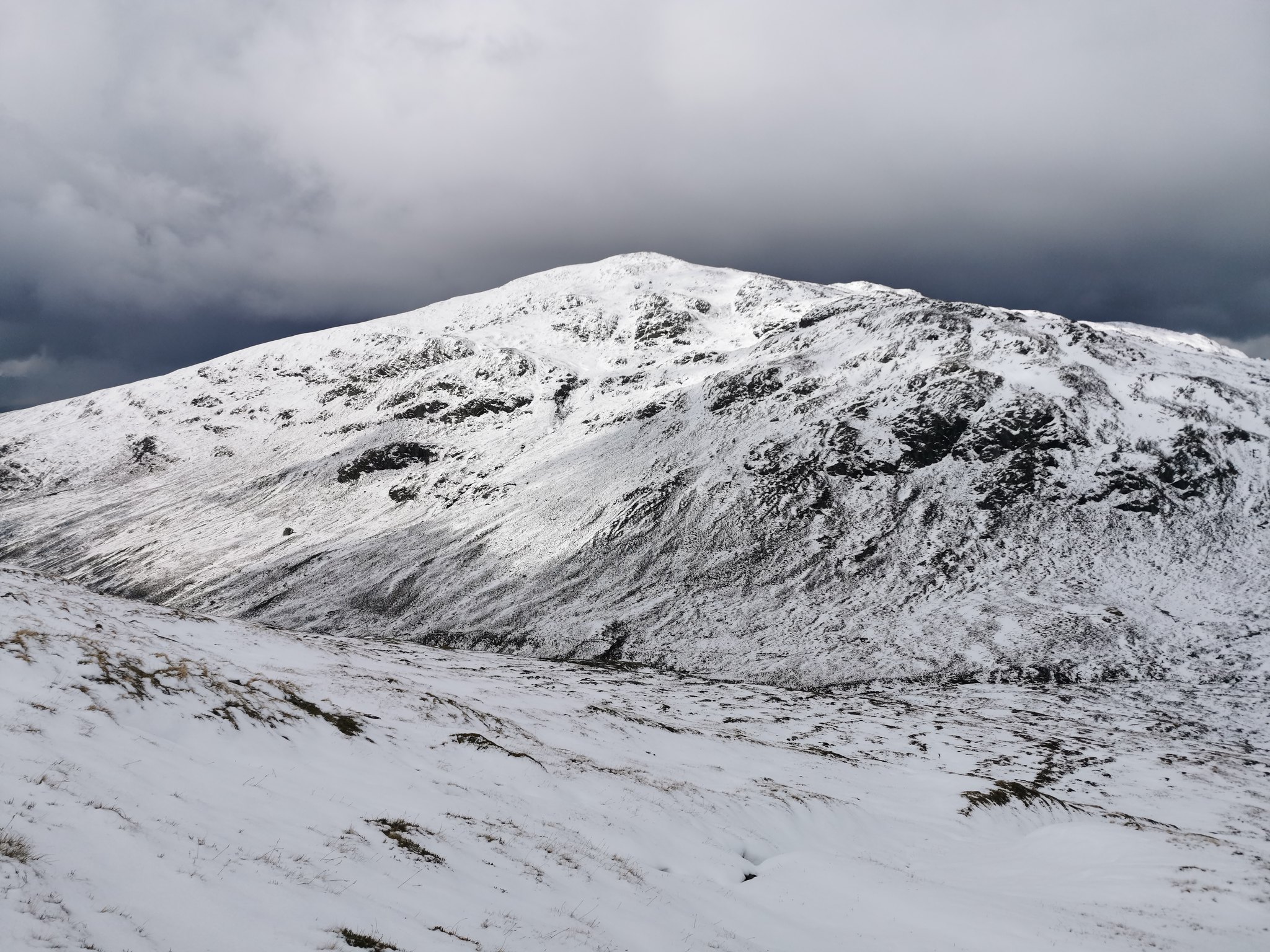 A view to Beinn Teallach during the descent.

The river at the bealach is easily crossed, and then I straightlined it up Beinn Teallach, cutting a bit of a tighter line by the looks of things than the WH route. With snow on the ground it never really mattered anyway, I like steep climbs! The sun was back out again after some threatening skies and hail showers, so all was looking good for the next hour or so. 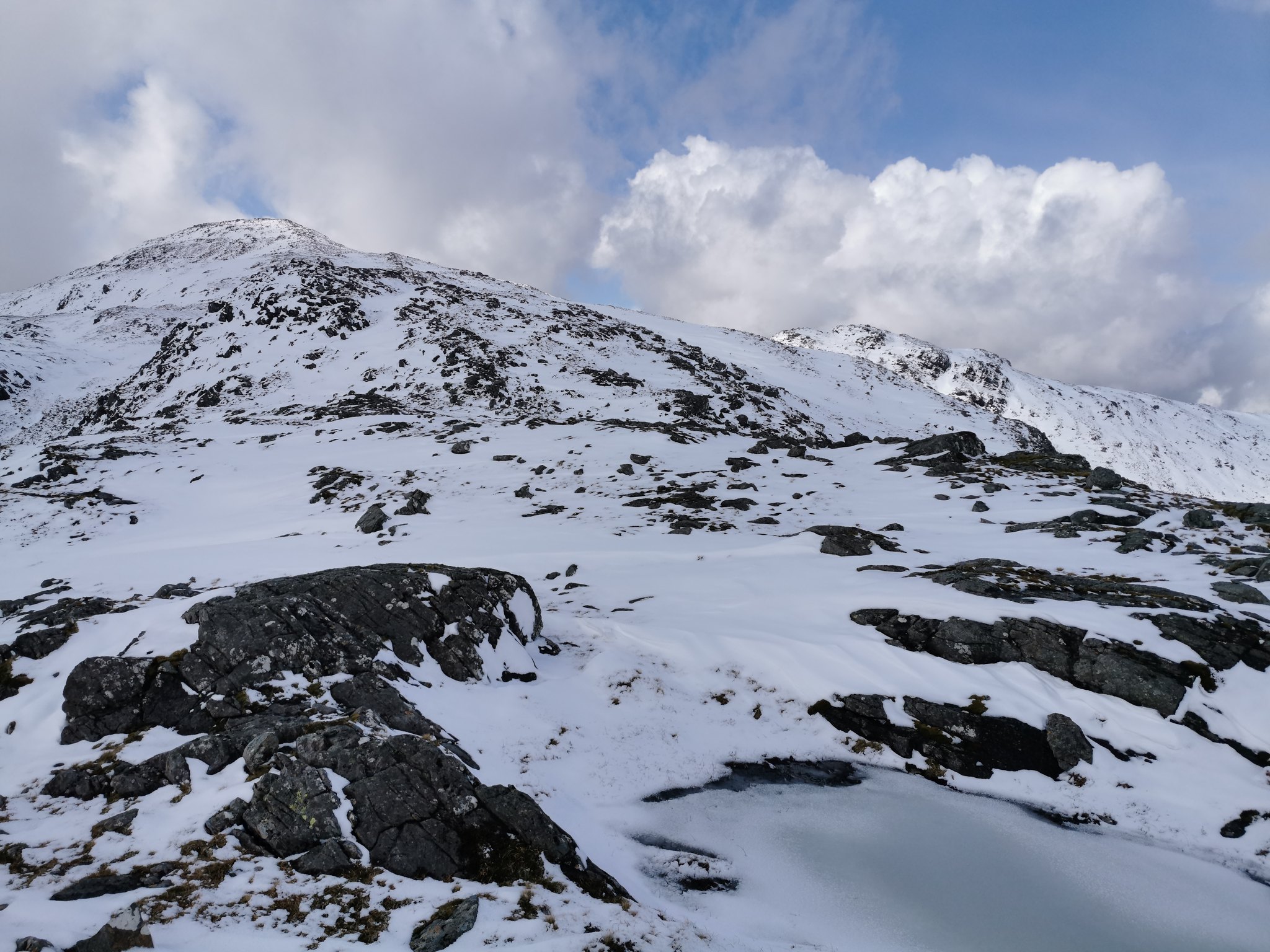 The view towards Beinn Teallach's summit. Any route will do! 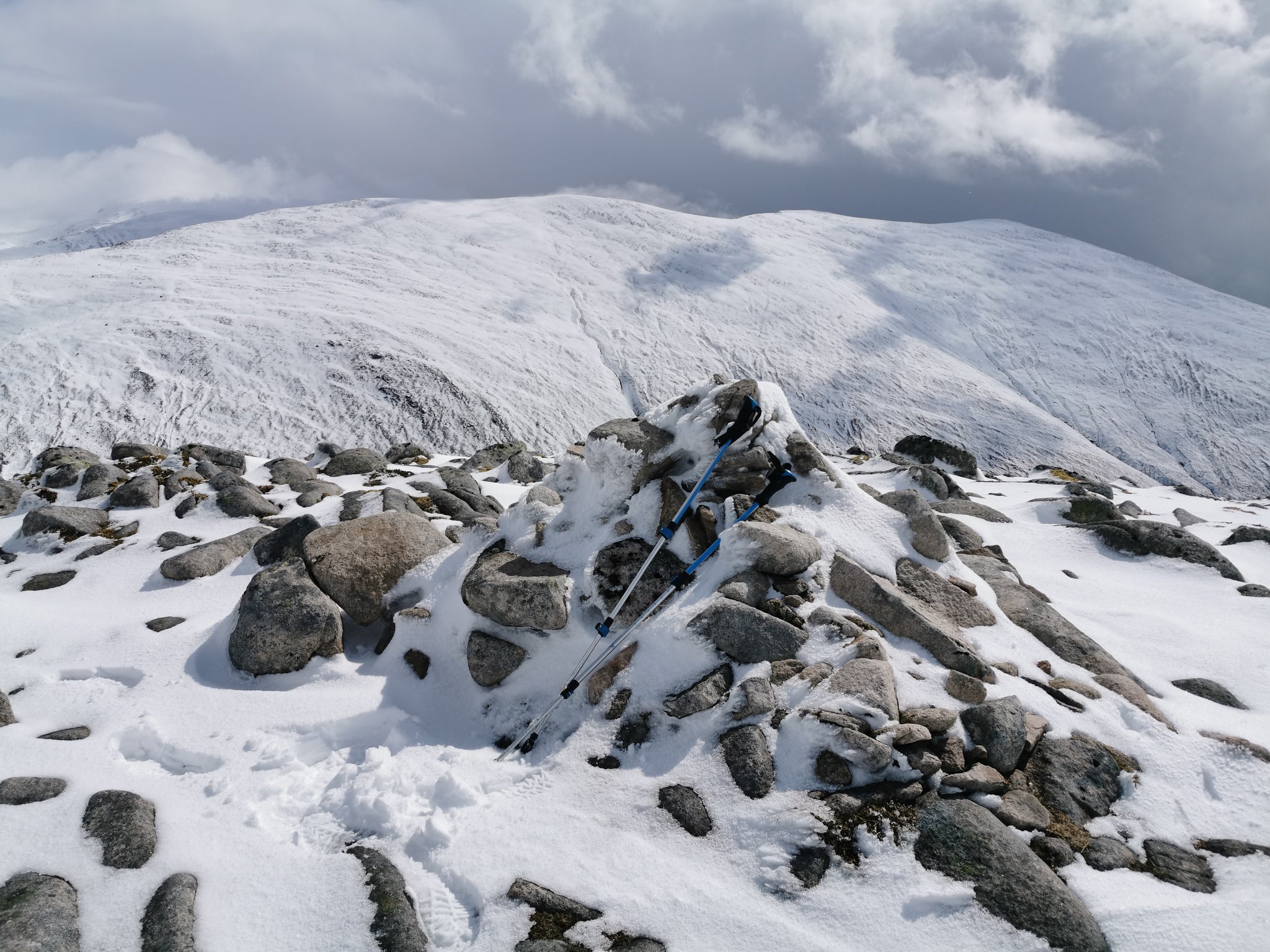 The summit of Beinn Teallach, my 180th munro.

The views on the summit were excellent and I was blessed with more sunny conditions while the Grey Corries and Mamores looked a bit sketchy. The Easains continued to steal the show and I sat having lunch and coffee while remembering my lengthy walk around the 4 munros around Loch Treig last summer. They looked incredible in the snow. 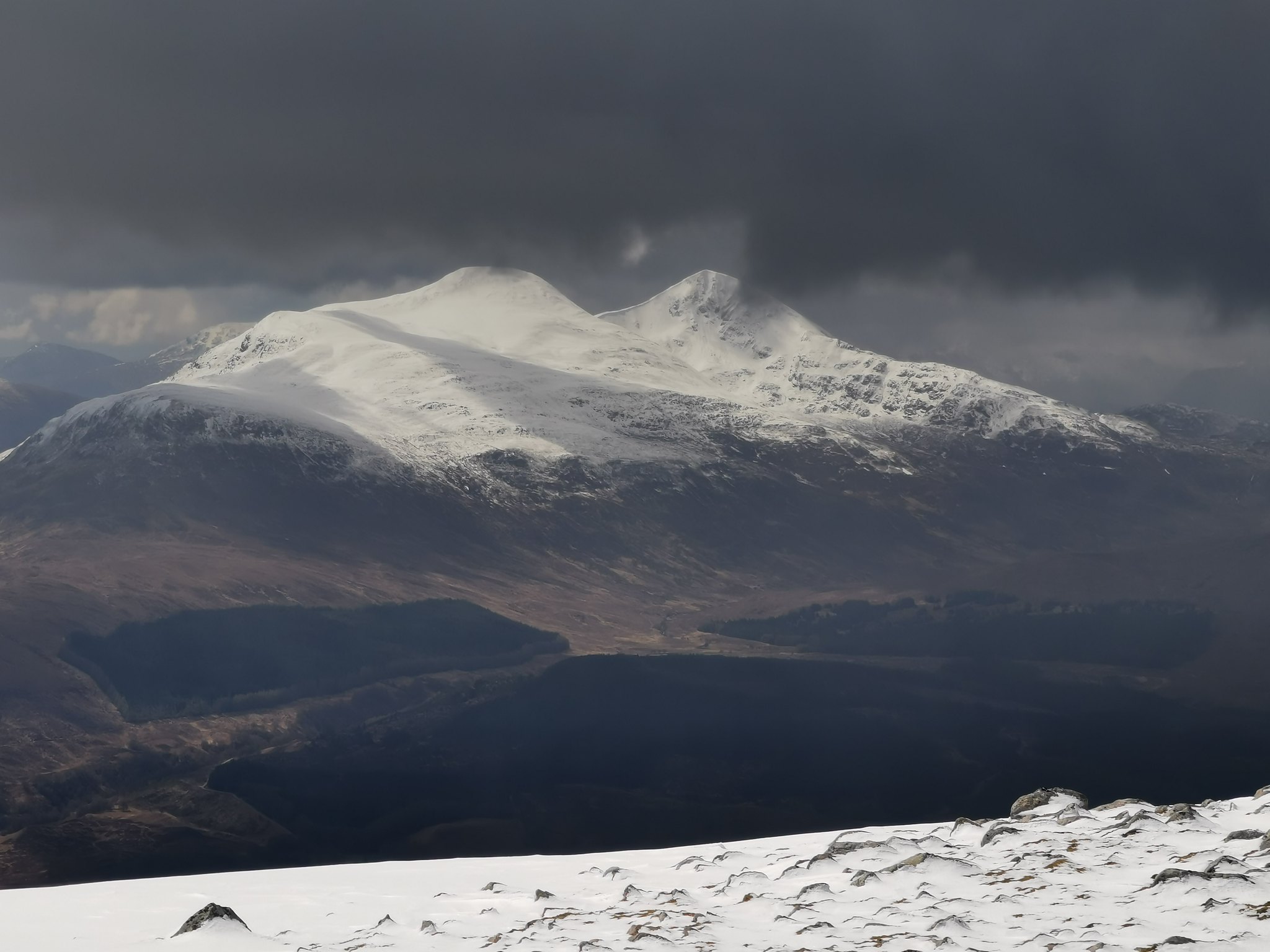 The Easains under a blanket of doom, very dramatic scenes. 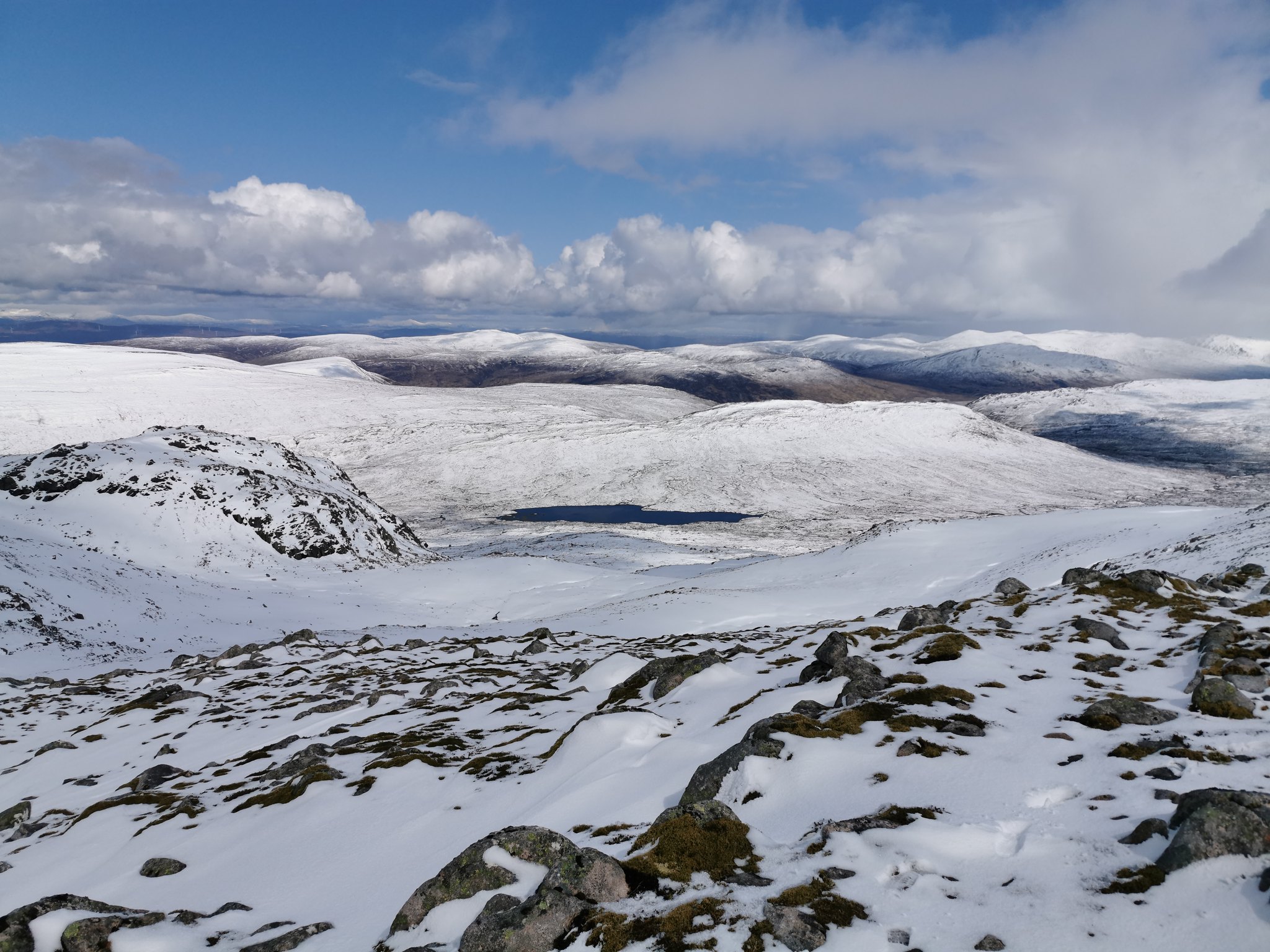 The view to the north.

After a good half hour of eating and faffing on the summit, the heavy clouds that were over the direction of the Loch Lochy munros were heading my way, so I made my way off the summit and started the descent off the hill. Again, without any paths of terrain to worry about, it was another straight line course towards the final descent to the river. 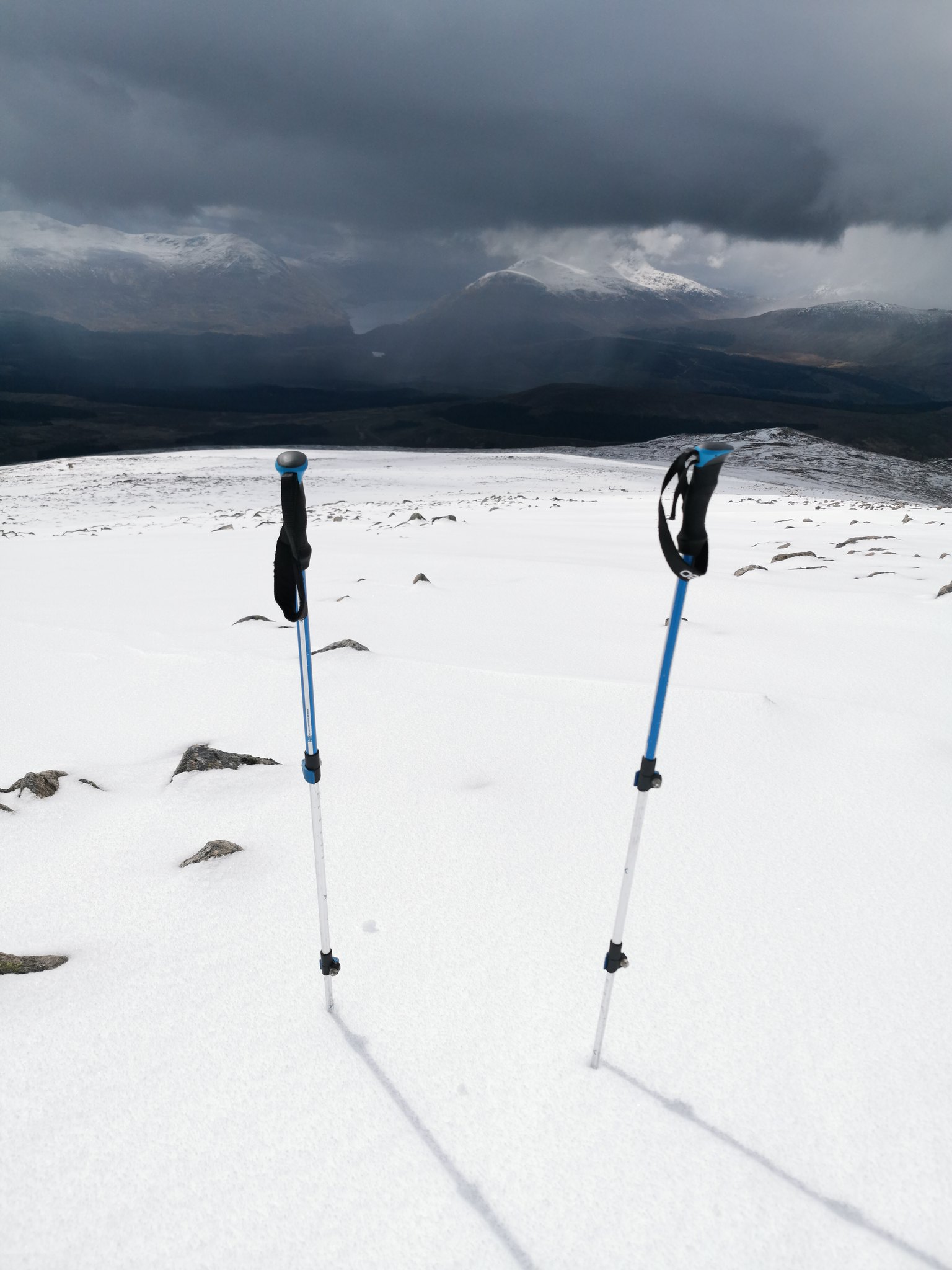 Clouds gathering above the way ahead

I was pelted with hail most of the descent, but since it was at my back I never really noticed much. It was just great fun being back out enjoying the hills and such great views. Around this point I noticed two figures near the summit of Beinn a'Chaorainn, making their way along the ridge. They were the only people I saw all day.

The final potential hurdle was the river crossing, although it had been very dry of late, aside from the recent dumpings of snow. To avoid any pesty backtracking, I crossed the river no bother about 300m above the advertised ford crossing on the WH route, courtesy of a long-jump style leap from the mid-river boulder. This puts you back in the swampy sheep field where you rejoin your route on the track you take on the way in. Around 15 minutes later and I was back at the car, with one final photo of the Easains lit up in the sun. 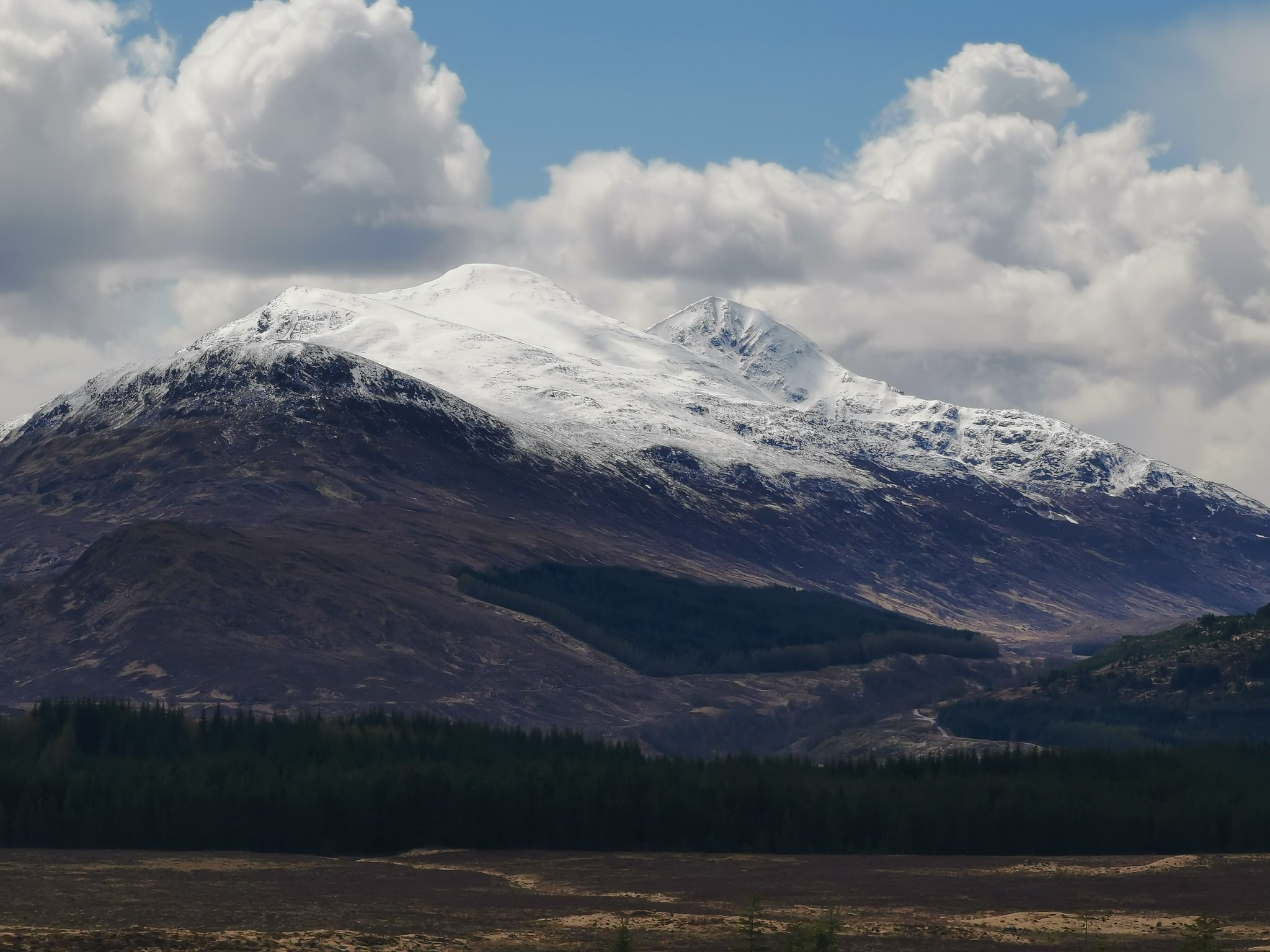 My walk took me 5hrs 50 mins with plenty photo and food stops in between. Based on some people's boggy experiences, I was thankful to do most of the route in the snow, and enjoy walking in it and picking my own routes and not blindly following paths.

A top day out, and magical to be back in the hills!
Click to mark this as a great report. Register or Login free to be able to rate and comment on reports (as well as access 1:25000 mapping).


Beinn Lora with Annie and Laura

West Lomond and the Bunnet Stane